The Ural Mountaints: A Mecca for UFO enthusiasts 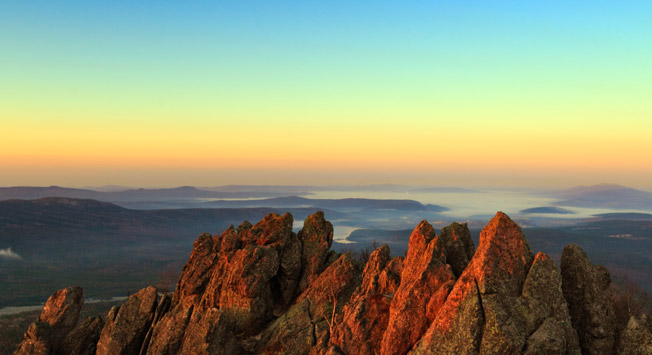 Lori Images, Legion Media
The Ural Mountains stretch across two thousand kilometers, traversing the heart of Russia. They’re among the oldest mountains on the planet, and are typically known for their unique, fairytale- like beauty. However, the mountain range also has a more mythical reputation for its abundance of UFO-active zones, mystics and anomalies.
UFO followers from around the world congregate at the Ural Mountains, which enthusiasts call a “mecca for newcomers.” Intrigued by the supernatural rumors? Take a trip to the majestic Urals.

The treasury of abnormal points on the Urals includes more than 50 locations on maps of the North, Middle, South, Sub-polar and Polar Urals. According to ufologists, encounters with unbelievable phenomena occur not only in dense forests and nature preservations, but also near human settlements and sometimes even within their limits. There are dozens, maybe even hundreds, of eyewitness reports of various UFOs - cigar-shaped, pyramid-shaped, spherical and disk- shaped.

The first mention in historical chronicles of “encounters with aliens” was recorded in the Urals in the eighteenth century, when active development of the mountain industry began here. To this day evidence of strange fireballs, which caused panic among the workers, survives.

Several sources, citing the archives of the Commission on Meteorites of the USSR Academy of Sciences, reminisce about observations by local residents of an explosion of a cigar-shaped UFO in the Urals near the city Karpinsk in 1927.

The most puzzling event was the largest UFO crash in the USSR, which occurred in 1980 in the Verkhotursky District of Sverdlovsk Oblast, between the settlements of Likhanova, Glazunovka, Kosolmanka and Karelino. Allegedly, late in the evening, air defense systems detected three or four UFOs, and a huge disc with a diameter of 26 meters and a height of 5 meters was hit by several missiles; the bodies of two dwarf biological creatures were found inside.

In 1989, according to Perm ufologists, in the north of the Perm Oblast, more than 100 km north of Perm, a disc-shaped UFO resembling a gigantic mushroom with a diameter of close to 12 meters fell into the swampy territory for military training.

There is little information about these events - it is classified and left to rumors, hypotheses, and conjectures. We will describe several of the most famous anomalous zones of the Urals.

As one of the most picturesque corners of the Urals, the Taganay Mountain Ridge is a kingdom of rocks and lakes, alpine tundra, impenetrable taiga, mountain streams and stone rivers. It is part of a national park in the group of Taganay mountain ranges in the Southern Urals, located near the northeastern outskirts of the city Zlatoust. Tourists are warned that Taganay should not be visited without an experienced guide.

Occasionally UFOs are seen here, as well as electric balls, sound mirages, walking fog, chrono-mirages, ghosts, frequent fireballs, rapidly changing weather, towers of light of unknown origin, and in the wilderness -- even Bigfoot and a Kialimskaya Baba, a ghost who can show lost travelers the way or cause trouble. According to legends, it is possible to meet the Kyshtymskoye dwarf (a creature that once lived in the Kyshtym area and appeared here after the disaster at Mayak) and a yeti in this region.

At the Urenga Ridge and in the village Veselovka “classic lighting nests” can be spotted: fireballs and plasma balls often appear here that strike in the same place and meander, enduring for a very long time. A similar phenomenon occurs in places with low soil resistivity, which indicates either metal deposits or underground sources of water.

The most mysterious spot is perhaps the Big Moor Bog with an area of 36 square km, located in a large depression formed by tectonic plate movement. Some witnesses describe a partial loss of orientation, changes in the human psyche, which is why even the most experienced foresters stray there. Mobile phone headsets and cameras of tourists often break here. Most of the phenomena can be explained by peculiarities caused by electromagnetic radiation originating from numerous tectonic faults.

The 30th anniversary of the discovery of the most famous anomalous zone of Russia, located on the border of Perm Krai and Sverdlovsk Oblast - “Perm Anomalous Zone” or “Molyobka Triangle” - was recently celebrated. The zone is located about 10 km from the Molyobka village, which was founded in 1787. This “remote corner” is located at the confluence of the Sylva and Molyobka rivers. The area of the anomalous zone is roughly 70 sq. km and is essentially comprised of dense forest.

Molyobka became widely known after Permian geologist Emil Bachurin saw a glow over the forest and a round track on a plowed field 62 meters in diameter in October 1983. This place already had a notorious reputation in the past. There is evidence that even in the 1830s peasants described seeing various flying machines over Molyobka. Skilled hunters sometimes wander here for weeks on a small patch of land roughly 7 by 7 km.

Chronic mirages, biolocation anomalies, multicolored flashes, colored lights, flying luminous objects, voices of unknown origin, whistling, ancient choral singing, malfunctioning photo and video equipment, changing the course of time, the feeling of the presence of something foreign, headaches, high temperatures, states of temper ... - here is just a partial list of the “charms” that, according to eyewitnesses, may await those who come to this “UFO reserve.”

Scientists have tried to provide a rational explanation for the Molyobka phenomenon. According to them, magnetic fields change the movement of the Sylva River, which then forms the mysterious triangle from all sides. But what is the explanation for the unidentified flying objects that people continue to notice in these places?

In Molyobka it is very easy to find a guide among local residents, who can show visitors the most notable sights: Glade Horrors, anomalous Pyramids, Witch rings, Astral clearing, the telephone booth (where only a telephone is located on the four square meter plot of land), the countryside dead, the terrace of negative emotions, snake hill - the most beautiful place overlooking the anomalous zone, - and many more.

The Ilmensky State Mineral Reserve is known for not only its amazing untouched nature, but also for the phenomenon of the “bottomless hole.” On the hillside adjacent to the city of Miass, by a ravine in channels that water from the spring melt flows down, it is possible to see holes of immeasurable depth with a diameter not exceeding 15 centimeters. Ufologists believe that UFOs formed these holes during mining expeditions for rare earth elements, which are abundant in this reserve.

Thousands of tourists and residents of the Urals visit the nature park “Deer Springs” to admire the magical old nature conservation, mysterious cliffs and caves, the sacred river Serga and unique plants listed in the Red Book. The park is located 100 km west of Yekaterinburg on the Serga River near Bazhukovo Station. Deer Springs is not only a favorite weekend destination for residents of the Middle Urals, but also is a point of interest for ufologists, who have discovered many anomalous phenomena in several regions of the park. These include luminous balls flying out of the water, abnormal trees, flying UFOs, moving lights, strange sound effects, outlines of animals and objects, a sharp deterioration of health, hallucinations, as well as different entities and plasmoids captured on film. According to paranormal fans, one region particularly filled with strange and incomprehensible phenomena is the distant area of Mitkina Lake. They start just outside the Large Dip, which seems more like the crash-site of a flying saucer rather than a natural formation.

The “Sverdlovsk Triangle” or “Berezovsky Triangle” is the largest anomalous zone in the vicinity of Yekaterinburg. The triangle is located between the Shartashky stone quarry, the road to New Sverdlovskaya TETs and the city Beryozovsky. Its center hosts impassible marshes, pine forests and rocky hills. Ufologists say that something anomalous has continuously occurred for the last 20 years inside this triangle: Townspeople see strange floating lights and flying saucers - presumably a UFO, and chronal jumps occur. The Director of the local ufology museum described that he once passed through 10 km in this area in one hour, even though usually it would take at least two hours. Eyewitnesses insist that they have encountered mystical phenomena here: People have lost their orientation and begun to stray, eventually meeting paths that lead to the same place, while motorists have seen silhouettes of ghosts hovering over the highway at night.