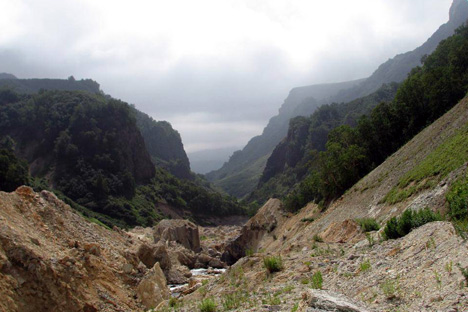 RBTH gives you the lowdown on areas in Russia that make the Bermuda Triangle look like a walk in the park.

A Bigfoot was once caught in the woods of the Republic of Ingushetia — it turned out to be a New Year’s prank pulled by the Ingush minister for labor and social development. To hunt for the “abnormal,” you have to be able to tell the difference between what is truly unbelievable and what is simply unreal.

Russia has three valleys of death — in Kamchatka, in Krasnoyarsk Region and in Yakutia. Only one of these is accessible to tourists. There is no chance of finding the other two.

Thus, lovers of extreme trips should go to the western slope of Kikhpinych volcano in Kamchatka. Its lowest thermal platform (984 feet wide and 6,561 feet long) is dubbed the “Valley of Death.” Its volcanic gases consist of carbon dioxide, hydrogen sulfide and highly toxic cyanides.

As soon as the snow melts, the ground is covered in dead mice; the foxes that come here following the smell of carrion also die. And so it goes, on up the chain to bears and birds of prey. More than a hundred researchers who went to Kamchatka as part of expeditions back in Soviet times died from intoxication, so visitors have to be extra careful.

In 2012, three laboratories — in Idaho, Moscow and St. Petersburg — concluded that a real-life Yeti exists in Russia. They analyzed the DNA of a clump of fur discovered in the Azass Cave in Mountain Shoriya (Altai Krai) in 2011 and confirmed that the biogenetic material from the cave belonged neither to ape nor to man.

The fur that allegedly belongs to the “Yeti from the Azass Cave” is identical to fur discovered near St. Petersburg, in the Urals and even in the United States. Biologists claim that it belongs to the same species — a species whose DNA is only 1 percent different from human DNA.

The Bigfoot has recently become “the” tourist attraction of the Mountain Shoriya area — it even has a Twitter account. Both Russian and foreign tourists come here in search of the Yeti. Last year, heavyweight boxer Nikolai Valuev visited the mountain. So, if you believe that the Yeti exists, it would be a good idea to go to Azass before Valuev finds him.

The Medveditskaya Ridge is a chain of rather low, 820-foot hills in Zhirnovsk District of Volgograd Region. The Ridge is known for its unusually high numbers of reported ball-lightning and UFO sightings.

Burnt trees that look like used matches can often be seen here, and there is an impressive network of underground tunnels that comes complete with stories about a race of snake people who live there. Even without the snake people, the tunnels are definitely worth your attention.

They are about 65 feet deep, with diameters ranging from 23 to 65 feet — wider than Moscow metro tunnels. Although they were blasted by field engineers at the start of World War II, people find more and more ways to get into the tunnels. There are two springs near the tunnels — one with distilled water and the other with water that has a higher-than-normal level of radiation.

The village of Molyobka sits on the border of the Perm and Sverdlovsk regions. Opposite the village, on the left bank of the Sylva River, is the famous Molyobka Triangle (also known as the Perm anomalous zone) — a geo-anomaly that is similar to the notorious Bermuda Triangle.

The anomaly became popular in the 1980s, when Perm geologist Emil Bachurin found a round, 206-foot print in the snow. Since then, the triangle has been a regular source of news on Yetis, UFOs, shining spheres and plasmoids. Research has also shown a powerful bio-location anomaly here.

UFO sightings have been reported in Russia’s Murmansk Region, Yakutia, the Far East and even Moscow. However, only Perm Region makes money on UFOs. T

he well-known Molyobka Triangle in the region is developing a UFO park: local businesses are building hotels and observatories for tourists, installing gravity meters, infrared cameras and magnetic-field sensors. UFO tourism also thrives in Tolyatti, where visitors can see some of the world’s largest crop circles.

Zelyony Island near Rostov-on-Don is the site where a “flying object without wings” fell before World War II; the military thought it was a German surveillance plane.

Since then, Zelyony has been called an “evil place,” where odd sounds are often reported. There have been many instances where visitors to the island suffered from spatial disorientation. UFO excursions are quite frequent; however, those looking for an adrenaline rush should come in small groups.

Russia also has its fair share of “power spots,” where people can recharge their batteries with positive power. That is what they say, at least. For example, such places can be found in Karelia, where, according to legend, the most powerful sorcerers live.

Other places include Belovodye, Russia’s Shambhala somewhere in Altai Territory, and Lovozero, a lake in the Kola Peninsula beyond the polar circle, where people come to improve their health and meditate.

Samara Luka is considered one of the most active anomalies in the world, with more than a thousand paranormal phenomena registered there in the last decade.

Mount Svyatelka, Shaman Glade and White Rock Mount in Samara Luka make up a major fracture zone, and powerful geomagnetic radiation has turned Samara Luka into a mecca for scholars and tourists from around the world.