Tracking down traditional architecture in the Russian North 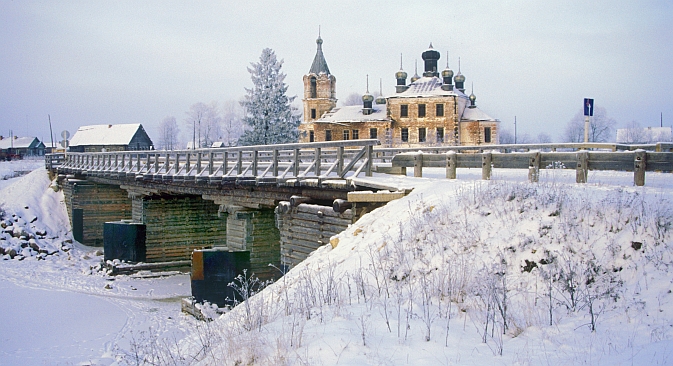 Although difficult to access, the churches in this small village in the Russian north make the trip worth the trouble.

The forests of the Russian north, dotted with lakes and rivers, remain a haven for some of Russia’s deepest artistic traditions. Despite population loss and economic decline, there are areas in the north that have preserved remarkable examples of this artistic legacy.

One such region is centered on the small town of Kargopol, located in the Arkhangelsk Region some 550 miles by rail and car from Moscow. Although a number of the region’s architectural landmarks now exist only in photographs, there are villages within a 60 mile radius of Kargopol that seem frozen in time.

The largest and best preserved of these villages is Oshevensk, 50 miles northwest of Kargopol on the Churyuga River. On the way from Kargopol the small road winds through fields and woods before approaching the river at a village fittingly name Reka (“river”).

Near the bridge over the Churyuga stands the brick Church of St. George (1890s), with its five cupolas and bell tower. Ransacked in the 1930s and converted to farm storage, the church has been gradually restored, and the main altar was reconsecrated in 2004.

The approach to Oshevensk is marked on the left by the remaining brick and limestone structures at the Monastery of St. Alexander Oshevensky, established by the monk Alexander in 1453--the year Constantinople fell to the Ottoman Turks. Its founder was born with the name Alexei to the family of a prosperous peasant, Nikifor Osheven, who encouraged his son’s spiritual education.

Tonsured and given the name Alexander at St. Cyril Belozersk Monastery, the young monk followed his father’s move to rich lands west of Kargopol that were owned by Novgorod, medieval Russia’s leading commercial city. The monastery became a spiritual center, and Alexander (1427-79) was venerated as a local saint. Although closed and devastated during the Soviet era, the monastery and its main Church of the Dormition (1707) are once again open for visitors and pilgrims.

Just beyond the monastery, the Churyuga River is crossed by a wooden bridge that is itself a work of art that leads visitors to Oshevensk (or Oshevenskoe, as it is officially known. It is a relatively large village with some 600 inhabitants, a number of whom rent houses to summer visitors.

The extended linear form of Oshevensk consists of a cluster of settlements, including three hamlets picturesquely situated along the riverbank. The first is named Pogost, a name derived from a general term for sacred ground, usually containing a cemetery and church.

The church in Pogost is dedicated to the Epiphany and is one of the most extraordinary combinations of structure and art in the Russian north. Built of sturdy pine logs in 1787, the Epiphany Church culminates in a tall “tent” tower over the octagonal main structure. The church bell tower—octagonal on a square base--stands separately to the north with its own vertical cap. The two complement each other with serene harmony.

But the miracle of this church is its interior, which is one of the largest such spaces among northern log churches. Its icon screen is staggering in its extent, yet few of the icons remain. The church was closed in the 1930s, reopened during the war, and closed again in 1960 during Nikita Khrushchev’s “final” campaign against religion. It was reopened for prayer and occasional services in the late 1990s. During this long period, most of the icons were taken.

No less impressive than the icon screen is the painted suspended ceiling, or "heaven", which still has most of its panels intact. These painted “heavens’ are a distinctive feature, a combination of art and architecture, painting and structure.

The basic form of the "heaven" is a polygon segmented by flat beams extending from the top of the walls to a ring in the center. The beams are slightly inclined and thus create a frame that is self-supporting between the walls and the ring. The painted panels are in the shape of narrow triangles and are laid upon the frame without fasteners.

Discover the life of reindeer breaders of the Kola Peninsula

The design makes ingenious use of tension and gravity. The “heaven” at the Epiphany church is uniquely large, with 18 panel segments that show various saints, archangels, evangelists and heavenly forms. The central ring is occupied by an image of Christ.

The main altar (behind the icon screen) is flanked on the northeast and southeast by two enclosed secondary altars that have small variants of the “heaven” painted ceilings. For heated winter worship in this severe climate, a refectory extends from the west of the main structure.

At the far end of Oshevensk is the hamlet of Niz, whose name indicates its position at the lower end of Oshevensk. It, too, has its jewel, the miniature Chapel of St. George, built in the 19th century on a gentle rise as the road enters the village. The chapel has two towers, one of which serves as a belfry. Although chapels do not have altars, the Chapel of St. George has an array of icons displayed throughout the interior. And it has its small painted “heaven” with eight panels.

Getting to Oshevensk is not an easy matter, but its houses and churches are all the more valuable for being in their original location. Whatever the season and however difficult the road, local hospitality will reward the intrepid traveler with some of the most remarkable treasures to be found in the Russian countryside.