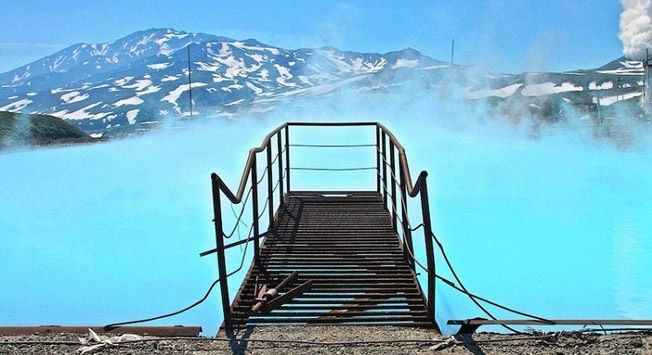 Photos by: Lori, Legion Media/ Geo Photo/ Timag82/ serega-kobah.livejournal.com/
Haven’t been to the largest country in the World yet? Too bad, but we guarantee that after reading this article, before you know it, your bags will be packed and you'll be en route to mother Russia.

One of the largest geyser fields in the world, the Valley of Geysers in Kamchatka is known as a part of the UNESCO World Heritage Site “Volcanoes of Kamchatka”. Every year only several thousand lucky burgees have a chance to visit it because of its remote location and reserve status.

In 2007 the Valley suffered from a massive mudflow which buried about a half of the Geysers. But already in 2013 a new landslide restored most of them and increased the number of Geysers.

Among the most famous geysers of the Valley are “Firstling”, the first Geyser to be discovered in the Valley in 1941 – throws a stream of boiling water directly into the river nearby; “The Giant” erupts 30 tons of water in a minute, the column reaches the height of 20-story building. “Triple” throws out the water from three different holes at the same time.

If you do not feel lucky (and rich) enough to see it with your own eyes, you can find the video translation from the Valley of Geysers on this site .

Lake Baikal is a world inhabited by thousands of species of birds, animals, plants, fish and microorganisms, many of which are not found in any other stretch of water in the world. The lake is so big that its surface area is as large as Belgium – that it would take around four months, at normal walking speed, to walk all the way around it.

So thick is the ice when the lake freezes that during the Russo-Japanese war of 1904, railway lines were laid over it which successfully supported 65 steam engines and 2,300 loaded wagons.

The location is also a UNESCO-listed Heritage Site.

Even Hollywood director James Cameron was won over by the charm of the region. He ventured more than once to the bottom of Lake Baikal in exploratory missions whilst preparing to film his movies “Titanic” and “Avatar”.

There are no roads in Chukotka, nor Railways. This fact converted this remote region into the paradise of wild nature with infinite Arctic storms and relentless frosts from the northern Pacific which all the witnesses consider one of the most majestic things they have seen in their lives. Nothern Lights, Bays and Fiords form unique picturesque landscapes that are impossible to forget.

A former open pit diamond mine is located in Siberia. It is so big, that it is forbidden for helicopters to pass the airspace above the mine as they may be sucked in by the downward air flow. With a depth of 525 meters and 1,200 in diameter, the Mir mine is the second largest excavated hole in the World.

The mine was closed in 2004, almost 50 years after the start of the mining. All this time the mining was held in extremely harsh Siberian conditions, with 7-month winters and an eternal permafrost because of which all the buildings of the town Mirny were constructed on piles to prevent their sinking. The temperatures were cold enough to freeze the oil and shatter the steel, at night the entire mine had to be covered to prevent the machinery from freezing.

But even under these tough conditions, the mine produced over 10 million carats per year.

Don’t miss a trip to the breathtaking, UNESCO-listed Kizhi Island. For most Russians, it became the epitome of medieval wooden architecture. The most familiar landmark is the 22-domed Church of the Transfiguration with its gables silhouetted above Kizhi’s grassy shore.

There have been churches on Kizhi for centuries, built using logs of scots pine, roofed with spruce wood planks and topped with a waterfall of aspen-covered domes. Traditional building methods involve no nails at all, but simply close-fitting notched logs.

The Cuacasian region of Ingushetia is full of towers and castles: on almost every mountain, behind every curve there is an ancient stone building. But even in Ingushetia, Vovnushki is considered to be sort of “exotic”, because of the strange converged form and pyramidal roofs. Built in the late Medieval era, they are considered to be one of the most mysterious and unusual architectural monuments in Russia.

In ingush language Vovnushki means “a place of battle towers”. To see them, you have to visit Ancient Egikal, the largest outdoor museum in Ingushetia is also the largest tower complex in the Republic.

The Urals, some of the most ancient mountains in the World, were formed over 350 million years ago.

The first human settlements in the Ural Mountains appeared 14,000 years ago. In the southern Urals there is the ‘sun-town’ of Arkaim, while in the north polar region you can meet groups of Khanty and Mansi, reindeer-herding peoples.

The Urals is also a paradise for fans of the paranormal – there are endless legends about UFO-sightings, and people come to follow in the footsteps of the lost Dyatlov Group expedition.

Putorana is the northernmost and one of the most ancient volcanic Plateaus in the World. It is situated to the East of the largest city on Earth above the polar circle – Norilsk.

The plateau is about 250 thousands square meters with an average height of the mountains of about 1 kilometer. More than 25 thousand lakes are located on its surface, the concentration of the waterfalls is one of the highest in the world. One of the highest waterfalls in Russia – Kanda (108 m.) – is situated here.

In spite of the fact that UNESCO-listed Putorana is situated above the Polar Circle, a huge variety of animal species live there. For instance, every year herds of more than 500 thousand deer cross the Plateau.

Multa lakes is the true pearl of the Altai region. They are divided into three lakes: Upper, Middle and Lower. The river Multa flows from the Lower Multa Lake, slightly larger than the other two. The Upper Multa lake is located in a giant “bowl” and surrounded by steeply-sloped ridges with the glaciers and snow on the peaks. The attractions of this pristine wildlife region are so numerous that one can spend their entire life there and not visit them all.

New Age enthusiasts come here searching for the mysteries of Shambala – a magical mythical land referred to in ancient Kalachkara texts. The area, commonly referred to as the “Russian Tibet”, lies along West Siberia’s southernmost borders, has long captivated visitors with is astounding natural beauty. Here you might find horses pasturing alongside deer herds and camel farms, fifteen hundred glaciers and a thousand lakes perched on the mountain ranges. Throat-singing shamans and Old Believers live at peace in the settlements and villages at the edges of the dense forests and rocky outcrops.

It is hard to say something new about the two Russian capitals. Strikingly different and both extremely magnetic, they often contrast with each other.

For instance, St. Petersburg isn’t a city – it’s a legend, a marvelous city whose beauty gives Paris a run for its money. People come here to admire the magnificent palace facades, the faded old courtyards, the imperial residences in the countryside and the Aurora cruiser. The city is famed for its suspension bridges, the State Hermitage Museum, the Gulf of Finland, the summertime white nights, the assassination of Rasputin, and the lion statues on Palace Embankment.

The Russian capital, like Russia itself, is astounding in its vast scale. Moscow is Europe’s largest city, with the world’s deepest-lying metro system, the world’s largest Orthodox church, and the world’s largest University building. The mirror-glass windows of skyscrapers are reflected in the golden onion-domes of the ancient cathedrals, and an excursion around the Boulevard Ring Road is like a trip through Time – Soviet-era Constructivist buildings stand cheek-by-jowl with Empire-era and Classical buildings, while the restaurants and bars are teeming with diners round-the-clock.

Lying within striking distance from Moscow, the Golden Ring is a treasure-trove for history buffs who desire to discover the country's Slavic roots.

The route runs through the towns of Ancient Rus, which have preserved some unique monuments of early Russian history and Culture: churches with wintry onion domes, monasteries and historic stone and wooden buildings. There are about a dozen ancient cities in the Golden ring, two of which are on the UNESCO list.

Ostrich farms, flying dogs, reindeer-herders who tell fortunes under the Northern Lights, and a long polar night that turns to daylight only once a year – all these extraordinarities are simple reality for Arctic habitats. Tourists with a penchant for history come here because the Russian Arctic was the birthplace of the Gulag, but there is a lot more to the region.

It’s a place where dawn is a long-awaited event, but that in summer goes for more than 30 days without the sun ever dipping below the horizon. Take a ferry to the North Pole from almost every town! With tens of wildlife reserves, northern nomad settlements and absolutely stunning nature, this remote and tough place is a must-see destination for an experienced traveler.