A weekend in Samara: The beer capital of Russia 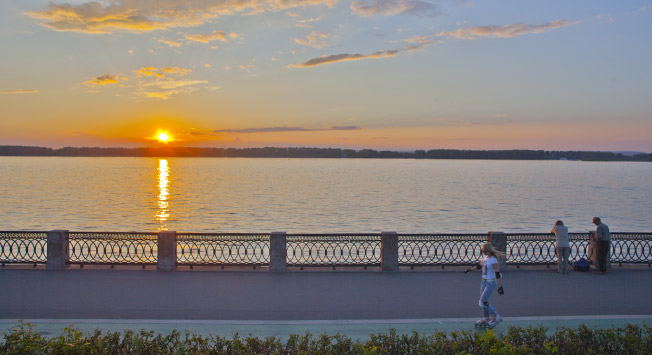 Samara offers not only beer, football and a couple bits of history, but a beautiful landscape

Samara is the sixth largest city in Russia. It is situated in the southeastern part of European Russia on the bank of the Volga.

There are two kinds of travellers who regularly beat the thousand-kilometre path from Moscow to Samara. The first are football fans following their teams to away matches. The other are fans of singer-songwriters and rock music on their way to the annual "Woodstocks" – The Grushin Festival and Rock nad Volgoy.

Could it be that the most authentic guides to the real side of Samara are the burly guys in Umbro hooded sweaters, or the bearded travellers lugging guitar-cases?

Samara is situated on the banks of the Volga River, and as far as inhabitants of central Russia are concerned, it’s the country’s main river. The main bank of the river hems neatly around Samara for over five kilometres.

To get the full feeling of Rock nad Volgoy, you can put on some modern Russian music as you stroll along the river and treat yourself to a cup of coffee (about 1.50 €) at one of the local cafes along the way.

You can end your leisurely amble along Samara’s river-banks with a visit to the Strukovsky Garden, one of the city’s most recognised attractions.

Just a few steps from Strukovsky Garden is Stalin’s Bunker. The bunker is now as big a tourist attraction as it was an official secret in the past. The bunker is underneath the modern Academy of Arts and Culture building, behind a barely noticeable door in the building’s courtyard.

Built during WW2, it remains to this day as one of the deepest and most impregnable of such underground complexes. The shelter itself is 37 metres below ground – equivalent to the height of a 12-storey building.

To put this in context, Hitler’s bunker in Berlin was only equal to a five-storey building, whereas Churchill and Roosevelt would have been just two storeys underground.

The bunker is equipped with its own air-recycling and power supplies. The complex is still kept in a state of operational readiness, and could shelter its inhabitants for up to five days.  Tickets cost approximately €2.

You’ll probably be feeling peckish after emerging from subterranean Samara, and here the name of one of Samara’s city symbols quickly comes to mind – the city brewery.

In Soviet times, the brewery produced the country’s most popular beer, Zhigulevskoye. Dozens of breweries throughout the USSR produced this beer, but Samara locals remain convinced that only theirs is the real thing.

You can enjoy a tasting of the pride of Soviet beer-making in the brewery’s restaurant, located in one of the oldest buildings in the complex (located at 4 Volzhsky prospekt).

The signboards outside have a peculiarly un-Soviet appearance, reading “U Vakano” in Russian. The name derives from the brewery’s original founder, Alfred von Vacano, an Austrian who was the first to bring the art of brewing beer to Samara.

The menu consists of traditional beer hall favourite dishes from Germany, the Mediterranean and the Czech Republic, alongside Russian classics such as Suvorovsky soup, hotpot and a wide selection dishes cooked with local Volga fish. Anyone who orders the roast leg of pork gets a litre of beer thrown in for free. Prices range from €15 to €45.

The Lower Depths (located at the same address, 4 Volzhsky prospekt) is a restaurant filled with local spirit.

When the local football team Krylya Sovetov (Soviet Wings) is playing, spectators coming from other Russian cities will usually commence their trip to Metallurg Stadium by setting out from this remarkable eatery. Here you’ll find football flags, chants and a river of Zhigulevskoye beer.

And when we say a river of beer, we’re not joking. Beer is piped directly into the bar from the brewery above, so you need have no fears about either its freshness or it running out. Half a litre of beer costs €1.50. However, only those not deterred by the rather unkempt appearance of the establishment will be able to check this out for themselves.

Locally caught fish of all possible kinds and styles are served with the beer – Caspian roach, sabre-fish, sturgeon, Azov roach, freshwater whitefish, bream, rudd and pike. The pride of the place goes to the Soviet favourite, crayfish.

There’s almost nowhere you’ll feel the atmosphere of the ”beer capital of Russia" more profoundly than at Metallurg Stadium. Don’t be surprised if you’re dragged along with the local fan brigade to the football stadium to cheer for the Soviet Wings. The stadium is at 1 ulitsa Stroiteley. Good tickets won’t cost you more than €15.

It makes sense to spend your second day in Samara outside the city – so make sure you get a hearty breakfast.

The pride of the Samara Region is the Zhiguli Nature Reserve, which is at Samara Bend. The Zhiguli Hills make up a large part of the reserve, peering down from a height of 375 metres above sea-level. There’s also a "water district" in the reserve, with ten different islands to see.

To book an excursion visit http://www.zhreserve.ru. Booking in advance ensures a waiting guide, and if you so choose, a car, though a personal set of wheels makes for a better trip. Most of the excursion programmes take around 3–4 hours and cost approximately €100. A virtual tour is also available at http://panorobot.ru/strelnaya/.

Those who prefer to sort out their own excursions can take the seasoned advice of experienced "savages."

A number of different local buses and hopper bus services run to the helicopter pad (N1 and N50, among others) from the main Samara railway station. The journey time is around an hour, and the rest of the day is yours to stroll down the paved pathways, enjoy Volga views while getting a bite to eat at one of the cafes, and get some great snapshots to take home.

A favourite spot with locals and visitors alike is the helicopter pad, one of the obligatory stops on the wedding-day snapshot trawl. But you can come here without a wedding procession too. You quickly see the appeal to newlyweds: there’s a fabulous panoramic view over the Volga, the Zhiguli Hills, and the entire city.

Samara isn’t just hilltops and beer, though. The local football team aren’t called "Soviet Wings" for nothing! During the Soviet era, Samara was a major aviation industry production centre, developing aero-engines as well as other machines for both peaceful and not-so-peaceful applications.

There are several museums where you can find out more about the city's ‘military glory’.

The best place to start is the Cosmonautics Museum (21 prospekt Lenina). Many Russian cities have a museum of this kind, but the one in Samara is a cut above the rest. The main attraction is the legendary Soyuz, a Soviet-era space rocket.

And we’re not talking about a scale model here – it’s the actual rocket! The entire exhibition centre is located inside a mock rocket launch pad. Tickets to the museum cost €5, and a photo or video permit costs extra.

As with other Russian cities, the main souvenirs in Samara feature city emblems and symbols. No souvenir stall is without a beer mug, a reminder that Samara is the beer capital of Russia. Other typical souvenirs include cedar-wood carvings with Samara symbols.

Wooden boxes (with a stickered decoration) – €2

Terracotta plates, city emblems, made of Syzran clay – starting at €1.50

Reproductions featuring views of Samara courtyards and Zhiguli – starting at €4

Tabletop flags of Samara or Samara Region – starting at €3

Books about Samara and the Samara Region – starting at €8