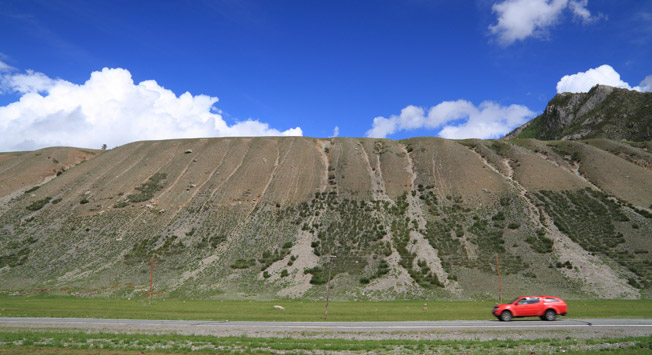 There’s something magical about road trips around the world’s largest country. A certain freedom, and the vast expanse of beauty that awaits from the Arctic Kola Peninsula to the Kalmyk Steppe – places the average tourist doesn't see.

Leaving Moscow, take the M4 highway onto the M6. Though the routes have been renovated lately, you may still face some rough patches on the regions' borders. Follow the M6 to Saratov, crossing the Ryazan, Tambov and Voronezh regions. Think of Saratov as the gateway to the Caspian Depression.

The road leads to Kamyshin, where a 40-minute ferry ride will take you across the Volga River. From there, it’s a two-hour drive onwards to Lake Elton, Lake Baskunchak’s more famous twin. The water is salty and very shallow – the water is no more than a foot deep in summer. The lake is surrounded by a flat and salty crust reminiscent of the surface of the moon.

Don't neglect to stop at Chapaevsky Ponds. It's not really a pond, but a bay along one of the Hara River's tributaries - which in turn flows into the Elton River. This freshwater bay is the only oasis in the entire mass of surrounding steppe, and is home to dozens of species of exotic birds and fish.

The best place to start your trip to the Kola Peninsula would be St. Petersburg. The Kola route (M18) is well-mapped and plenty of road signs make it difficult to get lost.

The Leningrad region has excellent roadside infrastructure with many gas stations along the way, but once you reach the Kola Peninsula road conditions begin to deteriorate and an off-road vehicle may be best.

St. Petersburg to Murmansk is a day's journey by car. After an overnight stop in Murmansk, head further north to the Rybachy Peninsula, at the far north of the Kola Peninsula, by the waters of the Barents Sea. The peninsula is located inside the Russian border zone, so you’ll need to get a permit in advance.

On the way to Rybachy is the Titovka River, replete with scenic rapids and waterfalls. By the time you get to Rybachy itself, you’ll find it almost devoid of habitation, except for some tiny hamlets and a few ghost towns.

You could make an overnight stop at Cape Nemetsky, which offers a fabulous view of the Barents Sea. But don’t forget, there’s tundra all year round, and the area is cold and foggy – pack some warm gear before heading off.

The Chuya Highway and the Altai Republic

The best starting point for a trip to the Karakol Lakes is Novosibirsk or Barnaul. From there, the road leads to the small town of Chemal. The M52 highway is a decent road, but only has two lanes for most of its length.

The majority of your journey will take you along the Chuya Highway, the opening bend of the magic Altai Spiral. Once you’ve crossed two mountain passes – the Seminsky and Chike-Taman – it's best to break by the Katun River.

The next day, continue along the Chuya Highway and you’ll catch a view of the confluence of Altai’s two great rivers – the Chuya and the Katun. Along the way, you can make a stop to see the rock carvings at Kalbyk-Tash.

Moving on, the road leads through Ulagansky District, with its mountain lakes, the Ulagansky Mountain Pass and the Pazyryk Valley, whose famous burial mounds lent their name to a whole archaeological civilisation.

You wind down the zigzagging Katu-Yaryk pass to the Chulyshman River Valley, a perfect place for an overnight stop. And this is what you’ve come all this way for – the Unchar cascading waterfall, the largest in Siberia, and stone boulders that look like mushrooms. The end-point of your route is the famous Lake Teletskoye.

The Republic of Kalmykia

The best route to Kalmykia is via Astrakhan on the R263 highway, which runs from Mineralnye Vody to Lagan. The road is acceptable, but in summer there's always roadwork and you might find some lanes closed.

The object of your journey here is the town of Lagan – the second-largest city in Kalmykia and just nine kilometres from the Caspian Sea. On the way, you can turn into the village of Vyshka to see an unusual 18 th -century lighthouse; you can’t see the sea from the lighthouse, as the peninsula on which it stands is hemmed in by canals, dykes and estuaries.

Once you reach Lagan, you can start sightseeing the local Buddhist sites. The temples at Lagan are relatively new, having been founded only in the 1990s. Even so, their unusual architectural style attracts many visitors. You’ll find a ritual prayer wheel – called a khurde in the Buryat language – in front of all the Buddhist temples. You can make a wish by saying it out loud, while spinning the drums (strictly in a clockwise direction) and then walking around the temple three times.

Just a few kilometres away from Lagan you can see lotuses blooming. The flowers bloom from mid-July to mid-August, and you can enjoy the beautiful pink, cream and white lotuses which are known as "Buddha’s Flowers."

To take a road trip to the Caucasus you’ll need an off-road car in the mountains, as a city vehicle with low ground clearance just won't do. A major reason to take this trip is that, in addition to all the sightseeing, you get to take it easy on the Black Sea coast once you arrive.

You could head to Adygea, for example. It really is an activity-filled journey, which includes some car-based excursions, a safari, some trekking on foot and some rafting. You can stay overnight near Belaya River Canyon. From there, you can go on one of the trekking routes to the Rufabgo Falls.

You can make a trip by jeep to the famous Lago-Naki plateau, well-known for its low-lying glaciers. There are observation points along the road to the plateau, offering spectacular views of the snow-capped mountain peaks. You can mix this on the same day with some trekking through the Caucasus Nature Reserve.