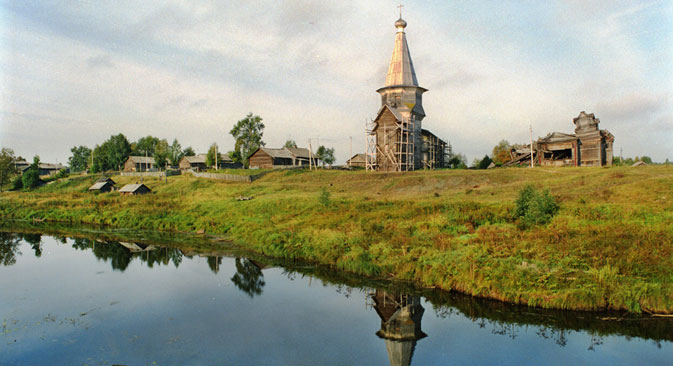 Located on a popular route for cruise ships between Moscow and St. Petersburg, the Vytegra region features numerous architectural monuments.

The small town of Vytegra (pop. around 10,000) in the northwestern corner of Vologda Province might seem like remote territory, but actually it is one of the most visited places in Russia, apart from Moscow and St. Petersburg. Indeed, by virtue of geography, Vytegra plays an important part in linking these two great cities.

Every summer, thousands of tourists who take popular riverboat cruises between Moscow and St. Petersburg pass directly by Vytegra, located on a small river of the same name.

Vytegra is first referred to in written documents at the end of the 15th century. By the early 18th century, the settlement had become a crossroads for trade between the northern port of Arkhangelsk and the city of St. Petersburg, founded in 1703 and designated the capital of Russia in 1712.

The challenge of linking the new capital with the interior of the country led to the development of a canal system eventually known as the Mariinsky Waterway, connecting St. Petersburg with the Volga River basin.

The first major component of the waterway was a canal that linked the Vytegra River, which flows into Lake Onega toward St. Petersburg, and the Kovzha River, which flows south into White Lake. In 1799, this segment was named the Mariinsky Canal, with Vytegra as its administrative center.

In 1911, Vytegra was photographed by Sergei Prokudin-Gorsky, who developed an early technique for color photography and was commissioned by the Ministry of Transportation to photograph along the Mariinsky Waterway. During World War II the strategic area around Vytegra was successfully defended against Finnish troops, who were at that time allies of Germany.

Although Vytegra was built of primarily of wood, the town center had several substantial brick structures at the turn of the 20th century, including administrative buildings, merchant houses, schools and churches. Some of these buildings have been preserved.

The most prominent of the town's monuments is the Church of the Purification, rebuilt and consecrated in 1873 on the site of an earlier church. During the Soviet period, the building was given to the local history museum, but most of the space has now been returned to the church. Its cupolas are clearly visible from the cruise boats that pass through the Vytegra canal locks.

Beyond is the Cathedral of the Resurrection (1796-1800), seen from the west with its bell tower and spire. In the background is the large Kuznetsov house, owned by a wealthy merchant family.

In addition to the remaining merchant houses and other historic buildings in the town, Vytegra can also boast of an unusual museum at its waterfront: the 1970s-era submarine B-440, decommissioned in 1998 and converted to a museum in 2003-2005.

The region beyond Vytegra at one time had some of the most interesting wooden church architecture in Russia. The best surviving example is the Church of Elijah the Prophet at Saminskii Pogost, built in the 1690s and covered with plank siding in the 19th century.

Located on the right bank of the Samina River about 30 miles north of Vytegra, this superb structure with its soaring tent tower has recently been carefully restored. Although the 19th-century bell tower attached to west façade was not rebuilt, the plank siding was retained as a means of protecting the log structure.

Next to this bold form, which has withstood the test of time, are the sad ruins of the Church of the Tikhvin Icon of the Virgin, erected in 1897 for use in the winter. Both churches were made of logs, but the form of the Tikhvin Church followed a style of masonry architecture associated with Konstantin Thon, whose designs were a model for Russian churches in the 19th century.

Imitating brick walls, the log structure of the Tikhvin church lacked the coherence of the much earlier and more daring design of its neighbor, which still stands as a monument to the traditional virtues of northern log architecture.

No matter how well built, log structures will eventually collapse if not maintained. An instructive example is the pair of churches at the village of Paltoga, just to the west of Vytegra. The white brick Church of the Virgin of the Sign (Znamenie), built in 1810, still stands as a picturesque neoclassical ruin.

Adjacent to it was the log Church of the Epiphany (1733), an unusual, beautiful form crowned with five cupolas. Already in a state of extreme disrepair in 2006, this remarkable church collapsed soon thereafter. Efforts have been made to conserve what is left of the lower structure, but the possibility of its complete reconstruction are dim.

High above the riverbank to the east of Vytegra is the village of Ankhimovo (also known as Vytegorskii Pogost), whose picturesque abandoned brick churches attract the cameras of cruise tourists.

The ensemble includes the Church of the Miraculous Image of the Savior (1780), stripped of its five cupolas and its interior art during the Soviet period. Nearby is the baroque-domed Church of All Saints, built in 1905 as a burial crypt for the wealthy merchant A. F. Loparyov.

Until the early 1960s, the commanding Ankhimovo site also contained the soaring form of the Church of the Intercession, built of logs in 1708. With its 25 cupolas it was a predecessor of the famed Church of the Transfiguration on Kizhi Island (1718). Unfortunately, the Ankhimovo church was tragically destroyed by fire in 1963.

Remarkably, the Intercession Church was reconstructed in 2004-2007 for a park near Novosaratovka, a suburb on the Neva River to the southeast of St. Petersburg. Although not as imposing as its original site, the park and rebuilt church can also be seen from cruise boats on their way to Moscow via Vytegra.