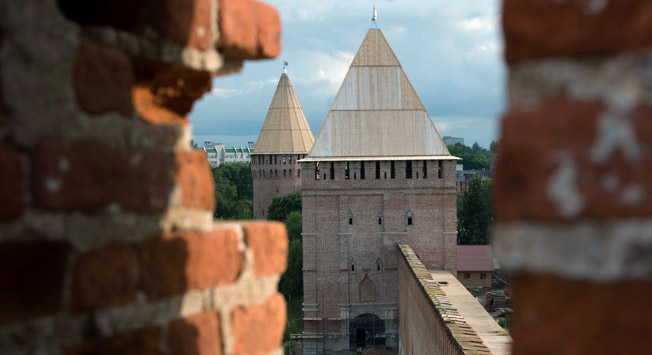 Ilya Pitalev, Ria Novosti
Smolensk is almost 380 kilometers away going west from Moscow. Four and a half hours by an express train going from Moscow to Paris and you are in Smolensk. The Hero City will greet you with a railway station, which was built in the second half of the twentieth century. The first thing that catches your eye is a massive fortress wall built from red bricks. Underneath there is an embankment. You can hear old trams rattling.

Since its first mention in Ustiug chronicles in 863 this "key city" had seen a lot, thanks to its geographical position.

In ancient times, many Finno-Ugric tribes settled here along with the Krivichi. Those who passed away were buried by the tribesmen in mass graves – in mounds. The most famous of them can be found in the archaeological landscape protection area Gnezdovo mounds. It is believed that Smolensk was founded in Gnezdovo, where the main commercial artery of Eastern Europe, the route from “the Vikings to the Greeks” was located.

The city was repeatedly destroyed down to the ground but afterwards rose from the ashes once again. It was also often passed from one another: in the XIV century Smolensk was part of the Grand Duchy of Lithuania, in the XVI century – became part of the Polish- Lithuanian Commonwealth. In 1654 the city became part of Moscow, but that was not the end of Smolensk’s vicissitudes.

Under Peter I Smolensk participated in the war against the Swedes for the Baltic lands. In 1812, Napoleon came here using the Old Smolensk road, and in the XX century – the Germans, who occupied the city for two long years. Smolensk eventually became the center of the partisan movement. In 1943, the city was liberated, but before that, Smolensk locals multiplied their grief – to which the Katyn memorial complex serves as proof. As part of a special operation of the People’s Commissariat for Internal Affairs, which was carried out by order of the Central Committee of the All- Union Communist party of March 5th 1940, 22 thousand Polish war prisoners were shot in the Smolensk region, Kalinin (Tver) region, as well as in the Ukraine and Belarus.

In the 50’s the city was rebuilt and actually built once again, the industry was raised from obscurity and people began to restore monuments. Smolensk was in the news in the XXI century, and in April 2010, the city thundered in the news again because during the landing at the North Smolensk airport the Polish President Lech Kaczynski’s plane crashed. Out of a total of 96 people nobody survived.

The first thing you need to do when you arrive in Smolensk is to climb up to the defensive wall, which was built in the XVI century by the architect Fyodor Kon. Here he is remembered and deeply loved. This is not surprising due to the fact that the wall withstood not one siege and is still standing today. It took 6 years to construct that wall, which is 6.5 kilometers long, from 12 to 16 meters high and 4.6 meters wide – which is relatively fast for that time.

Out of 38 towers only 17 still exist. "They say that in the wall there is the skull of reverend Mercury Smolenskiy’s horse – if anyone leans against the wall and hears neighing, then there will be trouble in the city" – the city guide tells us the legends associated with the wall. This wall is like a magnet for romantics. Couples hide in the towers amidst construction debris. They hug, walk, and look at the panorama of the city.

The pedestrian zone is constantly changing - first expanding, then becoming narrow again. It even seems that you can reach the Church of the Intercession, which is located nearby, with your hand. There is another legend told about the “Veseluha” tower (from the word “veseliy”, meaning cheerful): ghosts were seen here. The fact is that not far from the tower there was a brick factory, which belonged to one of the richest people in the city. In the basement of the tower there was a special department organized for counterfeiters. During the nights they dressed up and scared people: they staged nightly revels, so that people would get scared and wouldn’t go to the tower to find the department. People used to believe in the evil spirits, so this scared everyone. But once one of the counterfeiters, prior to leaving for the monastery, told the world this story. Although the department was eliminated, people were still afraid to go up to the tower.

And they also say that once a young woman was brick- encased into the wall of the tower, while still being alive. They say that she had a good laugh", - the guide adds.

The first thing that catches the eye when taking in the panorama of Smolensk is the majestic Cathedral of the Assumption - or rather, a whole complex of buildings on the Cathedral Hill.

Since the XVIII century the cathedral, which was built in the period of almost a hundred years - from 1677 to 1772, had not lost its beauty – it practically touches the clouds with its five golden domes. In the XII century in its place there was the Monomakh Cathedral - the main stone church of the city. In 1611 the Poles blew up the cathedral and in its place they arranged a Polish Roman Catholic church.

Inside the cathedral, which during the Soviet era served as an anti-religious museum, there is an amazing five- tier iconostasis of the XVIII century, which is decorated with gold- plated floral ornaments. In this case five-tier means five-story iconostasis.

In the cathedral there are three main sanctuaries: the icon of Lady of Smolensk Hodigitria (which means "showing us the way"), iron sandals of reverend Mercury Smolenskiy and a shroud which was embroidered in Yefrosinia Staritskaya’s workshop.

According to the legend, the icon painted in Smolensk by evangelist Luca was brought to Rus from Byzantium and saved the city from the troops of Baty- khan. Reverend Mercury is also associated with the Tatars: there is a legend that during the Mongol invasion of Russia in his dream he saw the Virgin Mary who told him to go straight into the enemy camp and to fight them. The reverend knew that he would die, but he still went to fight the enemy. Thanks to his act of bravery the Tatars did not demolish Smolensk and soon moved away from the city.

Yefrosinia Staritskaya is famous not only for her gold-shop, but also for speaking out against Ivan the Terrible – after that she was forcibly tonsured into a nun named Evdokia. Her other works can be found in the Moscow Kremlin or in the Russian museum, which is located in St Petersburg. As for the shroud, depicting the Virgin mourning Christ, it is kept in the Assumption Cathedral. This shroud is dated by the XVI century and is considered to be the best preserved out of the entire creative heritage.

For centuries Smolensk has been a multinational and multi- confessional center. In the city you can easily find an inactive Catholic Church and Lutheran Church, where a chess club is now held.

Smolensk is a living testimony to the war. There is a square in memory of the Heroes of 1812 – an alley of busts starting with Commander Kutuzov. Near this alley there is an oak tree growing from an acorn from the tree found at the grave of the Commander in Poland. Here he is especially respected, even though he was born in Saint Petersburg and spent his childhood in Pskov. Nevertheless for the Smolensk locals Kutuzov is a personal hero: the first monument erected in the devastated city after World War II is a monument to Kutuzov on the Cathedral Hill.

Heroes of the Great Patriotic war are buried in the ramparts. The main pride of Smolensk is Mikhail Yegorov, who was the one to hoist the Victory Banner over the Reichstag.

Monuments, obelisks, and stele dedicated to heroes of the war can be found all over the Smolensk region. Those who fell in battle and who defended the city are remembered and mourned.

The Smolensk Art Gallery can be found at number 4, Communist street. Inside there is an iron staircase, which dates back to the end of the XIX century and besides that almost 500 works of art in 14 halls: icons, paintings of Korovin, Serov, Repin, Tropinin, Aivazovsky, Surikov and Grabar. Along with Russian artists in the gallery there are various works of Spanish, Italian, Dutch, German and French artists and also Soviet avant-garde.

It is hard to believe that a provincial art gallery has works of art by world-famous artists. The most frequently asked question of tourists is: ‘Are these copies?’ The funny thing is that both Russians and foreigners ask this question, as if there are no museums in Russia, except for Moscow and Saint Petersburg.

It costs only 50 rubles to see these paintings. In Smolensk they don't ask much for their masterpieces.

You can also go for a stroll in parks, for example in the Lopatinskiy garden, which is named after Alexander Grigoryevich Lopatin, who used to be the governor of the Smolenskiy region from 1871- 1880. This garden is very big and loud. You can even find swans, swimming nearby – both black and white. Besides that there are fat ducks. When the garden was 140 years old, a special visit- center opened up for guests of the city – a real Smolenskiy chamber. If you arrive in Smolensk and you don’t know where to go, this place is for you.

Another garden that can be found in Smolensk, the Blonye garden, is the opposite of the aforementioned one – it is small and a bit elevated. It is located across from the Lenin square, where you can find the building of the region’s administration and Vladimir Ilyich made out of granite.

There is also another notable monument in the Blonye garden – a monument to a deer. After the Great Patriotic war he was found at Hermann Göring’s summer estate. The Smolensk locals think of this deer as being the symbol of their city and often decide to meet each other here.