The 8 most awesome places to take a dramatic Selfie 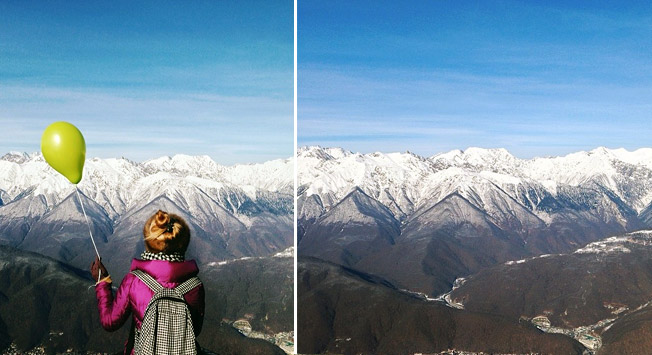 Instagram: @russian_moscow
Floating bell tower for a melancholic view, endless white fields for minimalism fans, great canyons to make the most out of extreme shots or lakes with boiling water – decide what will impress your insta-friends most. RBTH chose the best Russian places to boost your self-esteem with an eye-popping selfie.

It is expensive, sometimes – very cold and snowy, it is far away, but it is totally ‘yaaaay!’. We’d recommend everybody to go there – Kamchatka is an extremely unique and crazy place, where you can look into a volcano crater, surf in the cold Bering Sea, sleep under the night sky shining with billions of stars, go fishing together with bears, walk through the Valley of geysers and – what’s more important – make stunning photos of wild nature, so wild that sometimes it even does not look like Earth.

For history fans the floating belfry in the half-drowned city of Kalyzain will open a great chapter of Soviet reality. Most of this small Volga-side town disappeared under the waves of the reservoir when the building of the giant Uglich Dam went ahead. Lots of historic buildings were due to have been demolished. The Holy Trinity Monastery, along with its chapels and monastic dormitories were dynamited. However, due to some inexplicable cock-up, those who were responsible for demolishing the buildings didn’t get around to the belfry of the St Nicholas Cathedral before the water came gushing through. Several decades ago thousands of locals experienced a great tragedy here. It is still a great landmark for making melancholy photos.

Chukotka is the most remote, unreachable and inhospitable region of Russia. It is also the least explored. Being here, you feel like a speck in the silent snowy wilderness. Visitors to the region are exposed to the winds of two oceans, stand on one continent while looking at another, see the unique Arctic flora and fauna and the mysterious monuments of Chukotka’s ancient inhabitants. It is a great place to make a ‘frozen’ selfie with snow and ice stuck to your eyebrows and lashes. Most of Chukotka lies beyond the Arctic Circle: in winter, which lasts up to nine months a year, many houses are buried in snow up the their roofs. To exit from the house in the morning, people have to open the door inwards and dig a tunnel through the snow.

In Kola Peninsula the deer are so independent that they may take selfies by themselves. And occasionally steal your device. A long polar night turns to daylight only once a year, and with the long-awaited dawn the sun comes out of the horizon for more than 30 days. Nomadic reindeer-herders tell fortune under the Northern Lights, you may sleep in a tent surrounded by bear dens, visit ghost towns in the far-northern islands or ride a snowmobile through the vast tundra deserts.

For dwelling peacefully in a palm-lined location caressed by fresh sea breezes after skiing on the snowy slopes, go to Sochi. The air of the tourist Roza Khutor village is filled with the sweet melodies of popular songs and the scent of the wine quietly maturing in barrels out in the streets. Russia’s most well-known resort has long been a ‘tourist paradise’ and, with the 2014 Winter Olympics grew taller and broader. People come here to ski on the new ski-slopes, relax on the sandy sea beaches, go cliff-scrambling, and enjoy the refreshing air of the Caucasus natural reserves.

The Ural mountains are beautiful from any point of view – you can make a nice selfie in a frozen underground cave, or take a photo of the most ancient mountains in the World from the air – the small city of Kungur is famous not only for the giant Kungur cave but also as a ground zero for all the fans of balloon sports. The Urals is also a paradise for fans of the paranormal – there are endless legends about UFO-sightings, and people come to follow in the footsteps of the lost Dyatlov Group expedition.

As with most of the fast-growing financial capitals, Moscow is a city of egoists. Only here two guys may start a fight because one of them spoiled a selfie of another because he was distracted as he was taking a selfie at the same moment. A vivid cosmopolitan with old-town character and grand architecture is a melting pot for those who want to start their travel to Russia. On the one hand, it does not look like Russia at all. But on the other – it is a giant stained glass, combination of millions of faces of different ethnicities and ages from all corners and epochs of our wide country. This collage is better seen at a distance - why not try to make a photo from the rooftop?

Lake Baikal is full of "the's": the deepest, the purest, the largest... Not taking photos here is a sin. Lake Baikal is a world inhabited by thousands of species of birds, animals, plants, fish and microorganisms – many of which are not found in any other stretch of water in the world. Mostly, people come here to meditate and revel in the unique scenery. The location is also a UNESCO-listed Heritage Site. In summer you may try to swim in the icy water, visit it's islands by boat and go fishing. In winter it is the best place to... skate. The largest natural ice ring in the world.