Cross the bridge to Saratov, the city that appeared practically overnight 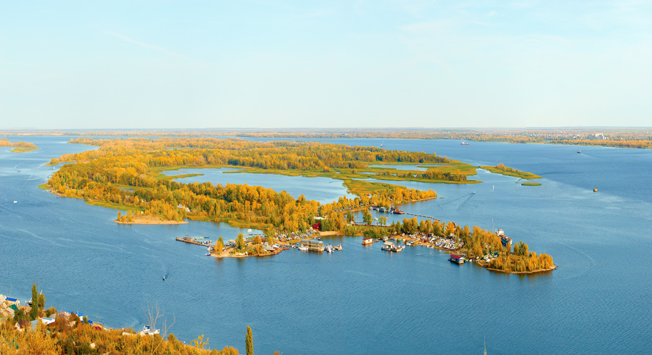 Lori/Legion-Media
Once one of the Russian Empire’s largest cities, Saratov is home to a conservatory, one of Russia’s most famous and oldest circuses and perhaps the finest art collection in provincial Russia. Throw in long pedestrian avenues, the legacy of the Volga Germans and the mighty Volga River and you start to see the fuller picture of this city that was literally built over night.

Saratov is a great place to feel the immense grandeur of the Volga River. Saratov offers an unusual collection of architecture from the pre-revolutionary and Soviet period and its large center makes for an excellent place to take an aimless walk through centuries of Russian history literally living on top of each other.

The city which was built over night 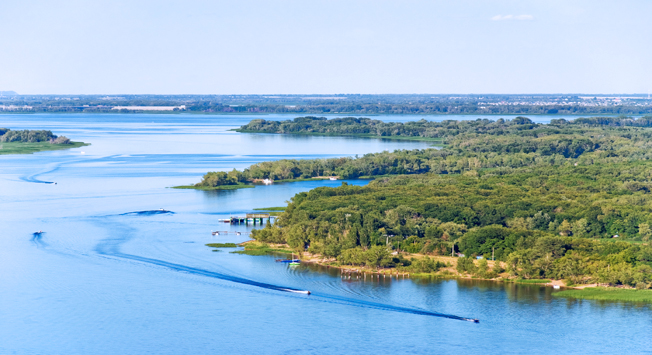 A view of Saratov from the Volga river. Photo credit: Lori/Legion-Media
Ukek, a Golden Horde city, was situated nearby until Tamerlane destroyed it in 1395. Saratov was founded in 1590 and soon became a popular stop between Europe and Asia. Located 858 kilometers southeast of Moscow, it was one of three lower Volga cities founded as forts to protect recently acquired territories at the Empire’s edge over a five-year span (1586-1590), along with present day Volgograd and Samara. Saratov was actually constructed significantly north of the city. The wooden buildings were disassembled, sent downstream and erected quickly allowing Saratov to appear practically overnight.

By the early 1800s Saratov had grown to be a significant port city and the railroad arrived in 1870. The city experienced a boom during World War II as many factories and institutes were relocated here, although it was closed during Soviet times as it was the site of a military aircraft manufacturing plant.

Saratov and neighboring city Engels (combined metro area today of over one million) were home to hundreds of thousands of Germans in the 18th , 19th and early 20th centuries. Originally invited by the Tsars to spur agricultural development in the area, the Volga Germans went on to hold prominent regional roles. Many were deported to Central Asia and Siberia during World War II, with many of those that remained immigrating to Germany in the 1980s. 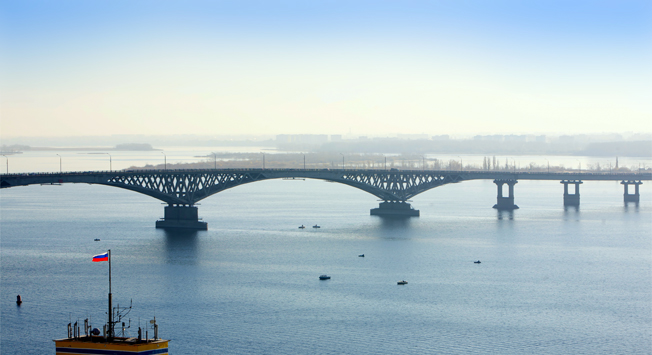 The bridge between Saratov and Engels. Photo credit: Lori/Legion-Media
The bridge connecting Saratov with its twin city across the Volga, Engels, was the longest in the Soviet Union when completed in 1965 at 2,826 meters long. The architecture is quite diverse on the Volga waterfront with luxury apartments mingling with log cabins. Make sure to see the Balneological Clinic for an example of an old sanatorium. There are numerous cafes along the river, as well as a pedestrian zone. From the River Port at St. Naberezhnaya Kosmonavtov 7a it is possible to take a cruise as far south as Astrakhan, as far north as St. Petersburg and all major cities on the Volga River, as well as Moscow. Cruises operate from early May until mid-September and a schedule can be found here: rech-vokzal.ru

Surprisingly, Saratov went three full centuries before a promenade was built along the river. One of the main attractions here is a statue dedicated to the first man in space, Yuri Gagarin. Gagarin first moved to Saratov to continue his studies in 1951 at the Saratov Industrial Technical School. He studied tractors and spent his weekends volunteering at a local aviation club where he learned to fly. He also worked part time on the Volga docks.

A walk through the city center 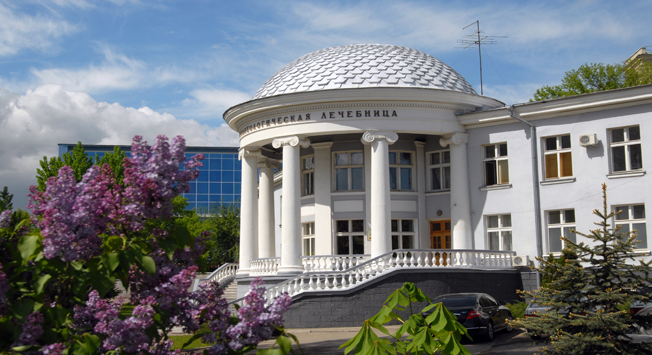 The oldest balneological clinic in Saratov. Photo credit: Lori/Legion-Media
The city’s main artery is Moskovskaya St., which leads from the Volga through the heart of the city, however, Saratov’s soul can be found on Prospekt Kirova, one of Russia’s first pedestrian zones. Until 1917 it was known as Nemetskaya St. in honor of the large German population. Many sights are located here, as well as dozens of bars and restaurants. Several statues dot the landscape including a bronze statue of an accordion player and one of a young man waiting for his love with flowers as inspired by this song about Saratov.

The Leonid Sobinov State Conservatory opened in 1912 at Kirova 1 not far from the entrance to the charming Park Lipki. At the time it was only the third in the country as Saratov was then the third largest city in Russia and the largest on the Volga (16th largest today).

The Nikitin Bothers Circus at the top of Kirova (away from the Volga) was the second stationary circus in Russia (the first is in Penza). This is probably the best place in town to see tigers and clowns under the same roof. Across the street is the Kryty Rynok, a covered market built in 1916. Behind the market is an example of a classic Soviet movie palace, Pobeda; it opened in 1955. If walking away from the circus towards the Volga there are well-preserved examples of proletarian communal buildings constructed in the 1920s on the left.

Also of note on the street is the cinema Pioneer at Kirova 11. It was previously a Catholic Church serving the German population. Partially destroyed during the Soviet period, a fragment of the original wall can be seen inside. 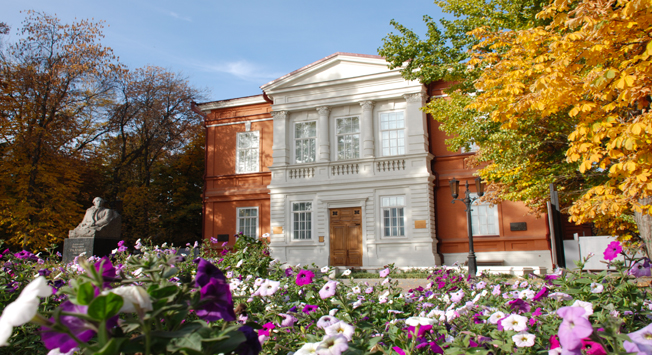 The building of the Saratov State Art Museum. Photo credit: Shutterstock
One block parallel to Kirova is Teatralnaya Square. Here is the Saratov Academic Theater of Opera and Ballet, built in 1875. Across the square is Radishchev Museum, featuring one of the finest art collections in provincial Russia. Named for the controversial 18 th century writer who grew up nearby (and whose grandson provided the initial collection), this was the first art museum in Russia to open its doors to the public. Today it counts numerous famous Russian painters in its collections including works by Repin, Shishkin and Falk.

The bridge out of the past to the future 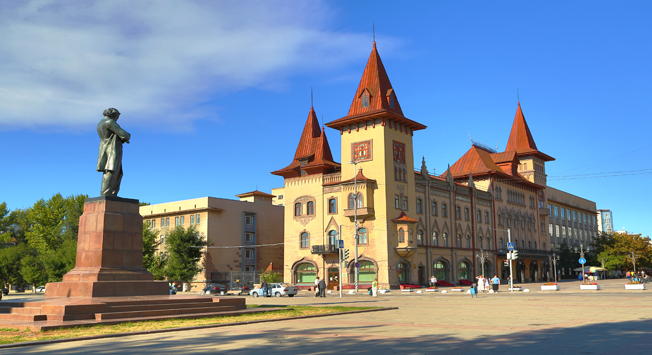 Monument to Chernyshevsky and conservatory in the city center of Saratov. Photo credit: Shutterstock/Legion-Media
One of the city’s most famous residents is Nikolai Chernyshevsky (1828-1889). A socialist, philosopher and writer, he is best known for his 1863 utopian novel, “What is to be Done?” It tells the story of Vera Pavlovna, an emancipated woman and the ascetic revolutionary Rakhmetov, who sleeps on nails and eats raw steak. The book had an enormous influence on Lenin; today the main public university is named for him and his museum is located at Chernyshevskogo St. 142.

Park Pobedy is the city’s largest and is located at about three kilometers from the Volga. It hosts the National Village of the Peoples of Saratov Region, an open-air architectural and ethnographic museum.

How to get there
There are many trains to Saratov, but the daily direct from Moscow’s Paveletsky station is both comfortable and convenient. It leaves at 17:50 and arrives the next morning at 08:50. There are limited flights to Saratov, although Saratov Airlines flies to and from Moscow Domodedovo up to six times daily.

Where to stay
Hotel Slovakia is probably the best budget option for those seeking Volga views. A standard large Soviet-era renovated hotel, rooms start at 2600 rubles. Nearby is the beautiful St. Trinity Cathedral. A church has stood here since 1675. Also of note is the Soothe My Sorrows Church (Utoli moi pechali) at Volzhskaya St. 36. It was inspired by St. Basil’s Cathedral in Moscow and completed in 1906. Another good central option is Irbis Business Hotel at Maksima Gorkogo St. 9 with rooms starting at 2400 rubles.