The Russian Far East: On the edge of the Pacific 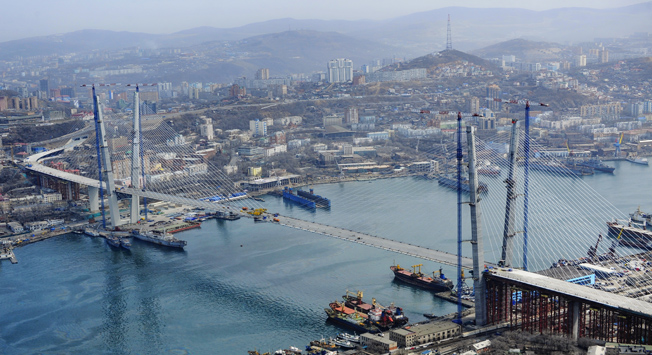 ITAR-TASS/Yury Smityuk
Many far eastern cities are so far from Moscow that to get from there to, for example, the United States or China, is easier than to the Russian capital. Chukotka and Alaska are separated by a strait of only 80 kilometers (one and a half hours by boat), and to get out of the capital city of the Amur region, Blagoveshchensk, to the nearest Chinese city of Heihe, one need only cross the river by ferry. Russians and Europeans come here for Asia, the Chinese - for Europe; in fact, this is quite unique to the Far East. Here the characters are interwoven with the Cyrillic alphabet, Datsans coexist with Orthodox churches, volcanoes erupt, windows reveal the passing Siberian tropics, and the Pacific Ocean is but a stone's throw away.

Amur Oblast lies on the border of Russia and China, 6 time zones away from Moscow and 130 kilometers from the main transport system of the Far East – the Trans-Siberian Railway. Its capital, Blagoveshchensk, is located on the east bank of the Amur River, one of the longest waterways in the world. Blagoveshchensk is largely similar to the American version of the cold of New Orleans, only with Orthodox churches and Chinese eateries instead of French crêperies. Most tourists are attracted to boat trips on the river because it is the Amur border between Russia and China. The proximity of China, (the city of Heihe is on the opposite bank), draws the interest of travelers to Blagoveshchensk, which is considered the starting point for trips to the Russian Far East.

In Yakutia, everything is different, and they even celebrate the New Year in June: the famous festival of the sun Ysyakh in the country's capital - Yakutsk - attracts thousands of people from all corners of Russia. However, a warm New Year is not the only thing that makes it worth it to go to Yakutsk. Permafrost, present in the coldest metropolis of the world, preserved the skeleton of a mammoth, which once lived in Siberia. Now, mammoths can be seen at the Museum of the Mammoth in the street Kulahovskogo, 48. On the Lena River, a few kilometers upstream from Yakutsk, is the world famous UNESCO monument. The hallmark of Yakutia, the Lena Pillars Nature Reserve, is a wall of vertical cliffs stretching for many kilometers along the Lena River. The best way to see the Russian giants is a trip on a riverboat.

Chinese tourists arrive in Khabarovsk "to see Europe," while Europeans and Muscovites come to see "the most Asian city in Russia." The capital of Khabarovsky Krai, one of the most beautiful cities in the eastern part of the Trans-Siberian railway, is surrounded by trees and has a carefully restored and well-groomed pre-revolutionary mansion. According to numerous rankings in previous years, Khabarovsk is one of the most livable cities in Russia; it is also the most expensive, and the prices are very "Moscow." Khabarovsk is the “Far Tretyakov," which displays works by Aivazovsky, Rembrandt, Titian and Japanese porcelain and ancient Russian icons. Despite this, the capital of the region is not the most interesting destination for tourists. Eco-tourists mainly come to the Khabarovsk region because here you can see the lotus lake, volcanoes, Amur and Ussuri tigers, bird rookeries and sea lion rookeries.

The Jewish Autonomous Region and its capital Birobidzhan, were formed in the early 1930s, after the decision of the CEC of the USSR. Before, the area was never a place of residence for Jewish people – in fact Soviet immigrants founded it. The city is full of names of garages like "Shalom Motors," sausage "Breeders" shops "Tsymes" and "Schnitzel in Birobidzhan." Every two years, the Jewish festivals are held here, and the Museum of Jerusalem in the synagogue holds an art exhibition called "Old Testament”. Any resident will tell you that in their hometown "there are only 27 less sunny days per year than in Odessa.” In addition, the region has 7 nature reserves, as well as the world's only pontoon bridge, frozen in the ice, which crosses the Amur River.

If you are interested in nature, go to Primorye - hot geysers, deserted beaches and high hills. Known as the "Russian San Francisco" or "Far Constantinople", Vladivostok, the capital of Primorsky Krai, is a paradise for gourmets. Seafood, a "Bird's milk" recipe with Ktorov based algae, Ahnfeltia, which was invented there, jam fern antlers with honey and brandy, Soviet toponyms and Cyrillic characters on outdoor advertisements, Vladivostok and its ancient buildings, futuristic bridges, and right-hand drive cars all build an extraordinary national character that cannot be found in any other city of Russia or the world. The Golden Horn, a curved boomerang bay in the center of Vladivostok, divides it into a respectable "center" and the marginal area Churkin, which goes back to the old traditions of New York’s Harlem or London’s Claimants End. The local Golden Horn is named after the bay of the same name in Turkey's Istanbul because of the similarity in shape. The strait separating the mainland from the island of Vladivostok, using the same analogy, was named "Eastern Bosphorus."

As notorious as Magadan and Kolyma are, they maintain a harsh edge with a rich and painful history: the system of the Kolyma labor camps that existed before the formation of the Magadan region in 1953. Nevertheless, even now, many people in Russia and abroad come to see Magadan city and the camp with its watchtowers and barbed wire. Today, unafraid of its past, the region's capital is a vibrant city full of museums, restaurants, and hotels. Located on the beautiful coast of the Okhotsk Sea, the city is the final destination of the M-56, or Kolyma tract. The road to the gold mineral resources of Yakutia was built by Gulag prisoners in 1932 – because of the harsh conditions of the Taiga, tens of thousands of people died during the construction. For this reason, the track is nicknamed "the road of bones." Now, the Kolyma highway is 2,200 kilometers long, and connects Yakutsk and Magadan. In addition to extreme rides on the highway, going to museums and to the monument "Mask of Sorrow," the Magadan region is known for its northern nature, which is a must-see for every fan of ecotourism.

Kamchatka peninsula is completely unexplored, and occupies territory almost equal to France in size. The only three cities in the peninsula struggled hard against the mighty nature of the region to win their right for Kamchatka's land. Here within arm's reach you have the majestic Pacific Ocean, mountains and snow-capped peaks of the caldera volcanoes, boiling lakes, rivers teeming with salmon, bear trails and fjords in Norway, thermal pools where you can swim all year round, and, of course, the unique Valley of Geysers. You should visit Kamchatka at least once in your life, and expect to feel that you must go back there again. There are no railways, or regular maritime links. The best way to get there is by air, unless the helicopter flight is delayed because of a volcanic eruption.

If the Earth were flat, Chukotka would literally be its edge. There are no roads, and the only passenger ship may get stuck in the ice at any time of year. People eat whales and walruses, and live in small villages scattered across the vast tundra, which in the summer is blazing with bright colors and smells, and in winter is immersed in the endless night, snow, and scary Arctic winds and mystical northern lights. Chukotka is the most remote, inaccessible, unknown and harsh region of Russia. Coming here, you feel the wind of two oceans - the Pacific and the Arctic, and, standing on one continent, you can see another. In the southeast of the island of Chukotka Yttygran is one of the most mysterious cultural monuments of the Arctic - Whale Alley. On an island where no one has ever lived, there is a stretch of about 500 meters where two rows dug into the ground hold the ribs and skulls of giant bowhead whales.

The Sakhalin Region is composed entirely of islands. It includes the island of Sakhalin, and the Kuril Islands - Moneron and Seal. Until the end of World War II, while the south of Sakhalin and the Kuril Islands had not moved from Japan to the Soviet Union, the region's capital, the city of Yuzhno-Sakhalinsk, had the Japanese name Toyohara. Japanese features have been preserved to this day, intricately intertwined with Soviet elements. When you consider the abundance of the Sakhalin Koreans, the Yuzhno-Sakhalinsk – the Asian Kaliningrad - can be regarded as the most international city in the Far East of Russia. Travelers usually do not stay in the city for a long time – they go to the Kuril Islands or Moneron Island. The Kuril Islands have about 40 active volcanoes and many natural monuments.