Grozny: day in the city revived from the ashes 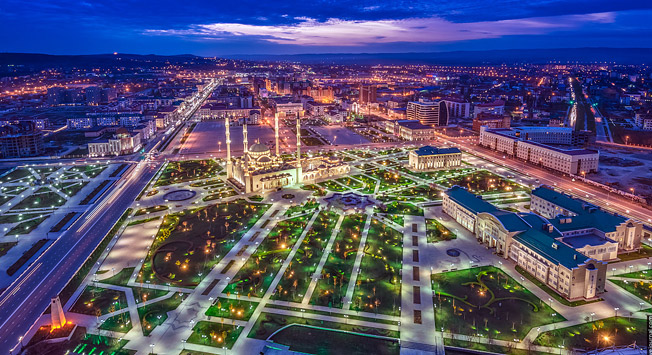 timag82.livejournal.com
Today, people here lead a peaceful life, and the capital of the republic is developing rapidly and can now compete with many Russian cities with a more fortuitous history.

In 1813, the lands of the Transcaucasus became part of the Russian Empire. However, the Caucasus mountains proved to be an obstacle in relations with the newly minted territories, especially their inhabitants, the militant Chechen people, who demonstrated their independence through constant raids on territories that acknowledged Russian rule. The task of establishing connections with the Transcaucasian territories was entrusted to General Alexei Yermolov. The highlanders’ resistance was firmly crushed, and along with punitive expeditions the Russian army created its own line of fortifications, the main outpost of which became the fortress General Yermolov named “Grozny,” or formidable. During the Caucasian War, the fortress became a hot spot whose defenders more than justified its name. When the conflict between the Russian army and the local population finally ended, trade began to develop, and the fortress became a city of the newly formed Terek Oblast.

Most of Grozny’s residents at that time were Russian soldiers and their families, but gradually a Chechen population began to appear in the city. At the end of the 19th century, oil fields opened and Grozny’s life changed: the city became one of the largest industrial centers in the Caucasus. Having survived the revolutionary turmoil, the fight against the Whites, the steadfast defense during the years of the Second World War, the deportation of its population to the steppes of Kazakhstan and Kyrgyzstan in 1944, and the massive unrest and ethnic riots that led to the bloody Chechen war with the terrorist enclave headed by Aslan Mashkadov in 1994, Grozny was revived and became one of Russia’s cultural and industrial centers.

Modern-day Grozny, despite its name, has little in common with the city founded in the 19th century. This applies to both the architecture and the city’s population. Two cruel military campaigns almost completely destroyed the old Grozny.

The city’s first and main attraction is the Heart of Chechnya mosque, an example of modern architecture. The mosque is named after Akhmat Kadyrov and is truly impressive in its scope and luxury. The interior and exterior walls of the grandiose building, which stands at the very center of the city, are finished with a rare marble called travertine. This fragile grained rock was also used in the construction of ancient Rome’s Coliseum.

The paintings inside the house of worship were made by Turkish artists, who wrote out Quranic ayats (texts from the Quran) in gold of the highest quality. The large chandeliers, made of bronze and gold and decorated with Swarovski crystals, represent a combination of the three most famous shrines of Islam in their configuration: the Kaaba in Mecca, the Rozvat Nebevi mosque in Medina, and the Qubbat as-Sahra in Jerusalem. The mihrab (the prayer niche found in the walls of Muslim temples) is huge, finished in white marble brought from Marmara Adasi, (Balikesir Province in Turkeu), an island in the Marmara Sea famous for its stone quarries since ancient times.

It is worth visiting the Akhmat Khadzhi Kadyrov Museum, which is located inside the Slava memorial complex, dedicated to the victory of 1945. No wonder the name of Akhmat Kadyrov also graces the main mosque—this man is a national symbol for Chechens, a symbol of peace.

The Slava memorial complex is impressive in its size (its overall area is 5 hectares). It was opened in 2010 and begins with the Walk of Glory. On the upper levels there are bas-reliefs depicting battle scenes, telling us about the key episodes of the Great Patriotic War, beginning with the Brest fortress and ending with the Victory Parade in Moscow.

The complex’s tiled floors are made of Spanish marble in the style of a Chechen ornament, and the columns are in Moroccan style. The central crystal chandelier is made of 750 light bulbs imported from Iran. The museum also houses art galleries. There are almost no old paintings left after the military campaigns, which is why the paintings are primarily those of modern Chechen artists.

Walking around Grozny, it is impossible not to notice the complex of skyscrapers—this is Grozny City. It is spread over an area of 4.5 hectares and includes three skyscrapers: one 45 storeys tall, and two 30 storeys tall. Additionally, the complex includes two 18-storey apartment buildings, a 5 star hotel, and a business center with a helipad.

There is also one Orthodox church in the city, the Church of St Michael the Archangel. It was built at the end of the 19th century, and it can be considered an architectural monument, but it was so damaged during the first Chechen that today it is only a restored replica rather than an original.

One of the main exhibition centers is the National Museum of the Chechen Republic. The museum’s new building, opened in 2005, was constructed in the national style out of artificial stone that, thanks to its textural and color treatment, successfully imitates mountain reservoir rocks, traditionally used by Chechens in constructing their homes and fortresses.

In one art exhibit, visitors are invited to view landscapes and portrait paintings by Chechen artists (A. Asukhanov, D. Idrisov, Kh. Isaev, Ch. Khasaev, among others), showcasing the most alluring aspects of Chechnya’s natural beauty, its common people, as well as social, political, cultural, and scientific figures. Note: It is important to keep in mind that Grozny’s museums charge 20 rubles per photograph.

In the center of the city, on the left bank of the Sunzha, stretches Chekhov Square. In the city, the spirit of time is felt only on the square, for it was here that the Grozny fortress was founded. Here grows Sophora japonica, blue spruce, and yellow fortzsiya, and from the Chekhov statue to the fountain, along the flowerbeds, grow Mediterranean evergreen shrubs: spherical and pyramidal boxwood sugi, a lot of flower beds with bright red cannas and salvias from South America.