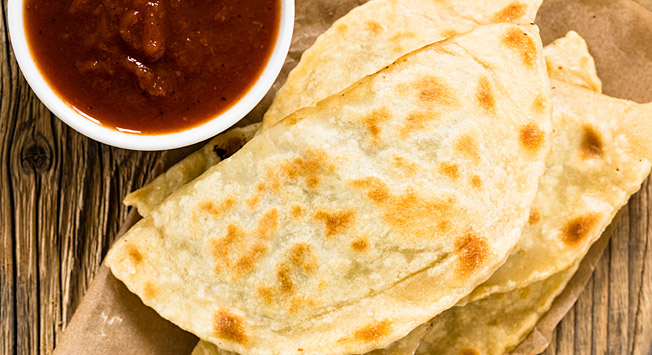 Crimean Tatar cuisine can be found more or less only in Crimea. Possible exceptions include Kazakhstan and Uzbekistan, where many of these former nomads were deported after World War II. This is often the cheapest and best food you can find on the peninsula.

Cheburek – the most famous regional dish – has long been popular throughout the countries that make up the former Soviet Union.

A cheburek looks like a large fried dumpling, however, it is translated from the Crimean Tatar language as a “pie with meat” (che – small pie, burek – meat). It is easily recognizable for its crunchy golden brown top.

Cheburek are cooked with yeastless flour and minced lamb or beef mixed with minced onions and peppers. They are fried in fat that is heated up to 200 degrees Celsius. If these ingredients are cooked on a dry frying pan without oil, they are called “yantyki.”

This dish is one of the most popular street foods found on the peninsula: Both the Uzbek “samosa” and Kazakh “manti” cannot compete with the crunchy goodness of the cheburek. This snack probably maintains its popularity because it is often cooked right in front of your eyes and served hot right off the stove.

You can find a cheburek everywhere, but the most delicious specimens are sold in the restaurants and cafes of the traditional Crimean town of Bakhchysarai near the Khan's Palace.

Rapana has become a symbol of the Black Sea, despite the fact that it appeared here only half a century ago. Rapana are covered by deceptively beautiful seashells, which tourists often take home to listen to the “sounds of the sea.” However, these shells mask the lairs of predatory sea snails that consume oysters and mussels.

Most people think that rapana was brought over from the Sea of Japan. It was first discovered in 1947 in Tsemes Bay in Novorossiysk (Krasnodar Territory). Back in the Far East rapana are no larger than four centimeters, while in Crimea they can reach the size of a teacup.  Rapana have become a plague to Black Sea marine life and have demolished oysters and mussels in such quantities that the water transparency has decreased.

Starfish are considered natural enemies of rapana because they feed on them and prevent their colonies from expanding. However, starfish are not able to thrive in the Black Sea, as the salinity is not high enough. As a result there is no creature to fight rapana’s domination of the sea. It has devoured all of the area’s oysters, practically wiped out scallops and significantly reduced the number of mussels.

Rapana has a sharp drill-tongue that it uses to force its way into bivalve shells and eat their insides. On Crimean beaches you will find shells with these neatly drilled holes. Fully-grown rapana use their muscular legs to unclamp shucks, and then they release venom into their victim before devouring them.

Rapana is a delicacy only enjoyed by humans. Its delicious meat tastes like squid or vinegar pickled mushrooms, and is dense with nutritious and easy-to-digest minerals. There is more protein (and high quality proteins as collagen and elastin) in rapana than the meat of usual farm animals.

In order to cook rapana properly it must receive minimum preparation to ensure it stays soft (boil from 3-5 minutes). If boiled for too long it becomes tough and chewy.

After European plaice, this is the favorite fish of Crimeans. The Mullus barbatus looks exotic because of the long shoots on its jaw bone. This is why the fish takes on the Latin name “barbatus,” meaning “bearded” in English.

On each side of the fish’s big head there are two long, fat wattles that it uses to get food. The fish’s other name – Sultanka – comes from this anatomical excrescence, as people thought that the fleshy and luxurious moustache these fish wore on their heads was befitting a sultan. Another version has it that the fish was such a delicacy that only sultans were allowed to eat it. There are more than 50 species of Mullus barbatus worldwide, but only one can be found in the Black Sea.

Mullus barbatus was quite popular in Ancient Rome. Romans valued large fish and were willing to pay large sums for it: one kilogram of silver often netted an equivalent weight in this fish. Chefs were ordered to bring it into the dining room in special pots so that guests could see the fish change its color upon death. Such ancient luminaries as Martial, Seneca, Cicero and Pliny wrote about the marvelous taste of the Mullus barbatus.

It is a quick dish to prepare and is packed with nutritious elements. Humans are not the only ones that find this fish worthy of dinner however: Predatory fish and dolphins also devour it, leading to a decline in its Black Sea population in recent years.