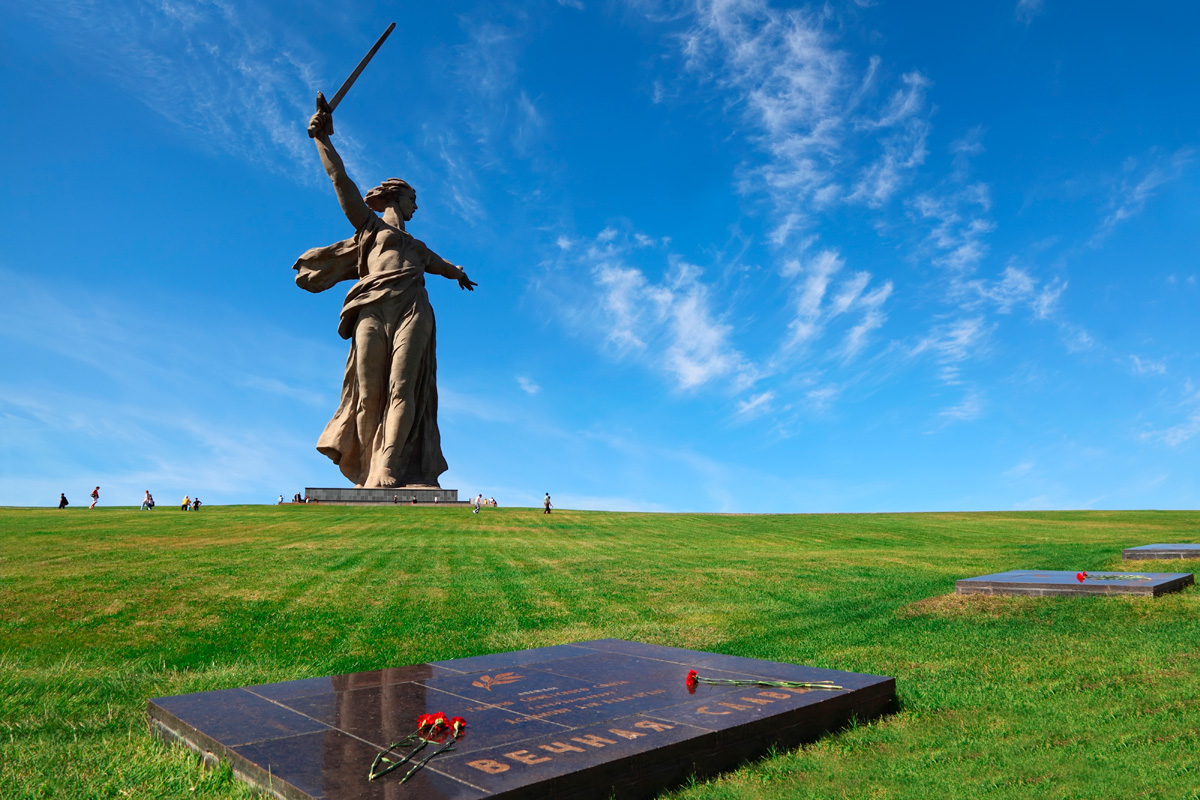 In 1945 the USSR was worn out by war. Moscow had been severely hit by enemy air raids, Leningrad (now St. Petersburg) had survived the blockade and lost eighty percent of its population, two thirds of Stalingrad (now Volgograd) had been destroyed. Today, 70 years later the sites of the terrible battles host memorial complexes, visited by travelers from all over the world.

In contemporary Russia it’s difficult to find a city that wasn’t touched by World War II in one way or another: Russian cities either became battlefields or were turned into shelters for evacuated people and factories. The nine cities that suffered the most from the war were subsequently awarded the title of “Hero City:” Moscow, St. Petersburg, Volgograd, Tula, Smolensk, Murmansk, Kerch, Novorossiysk and Sevastopol. Here RBTH reviews several of these cities’ most impressive war memorials. 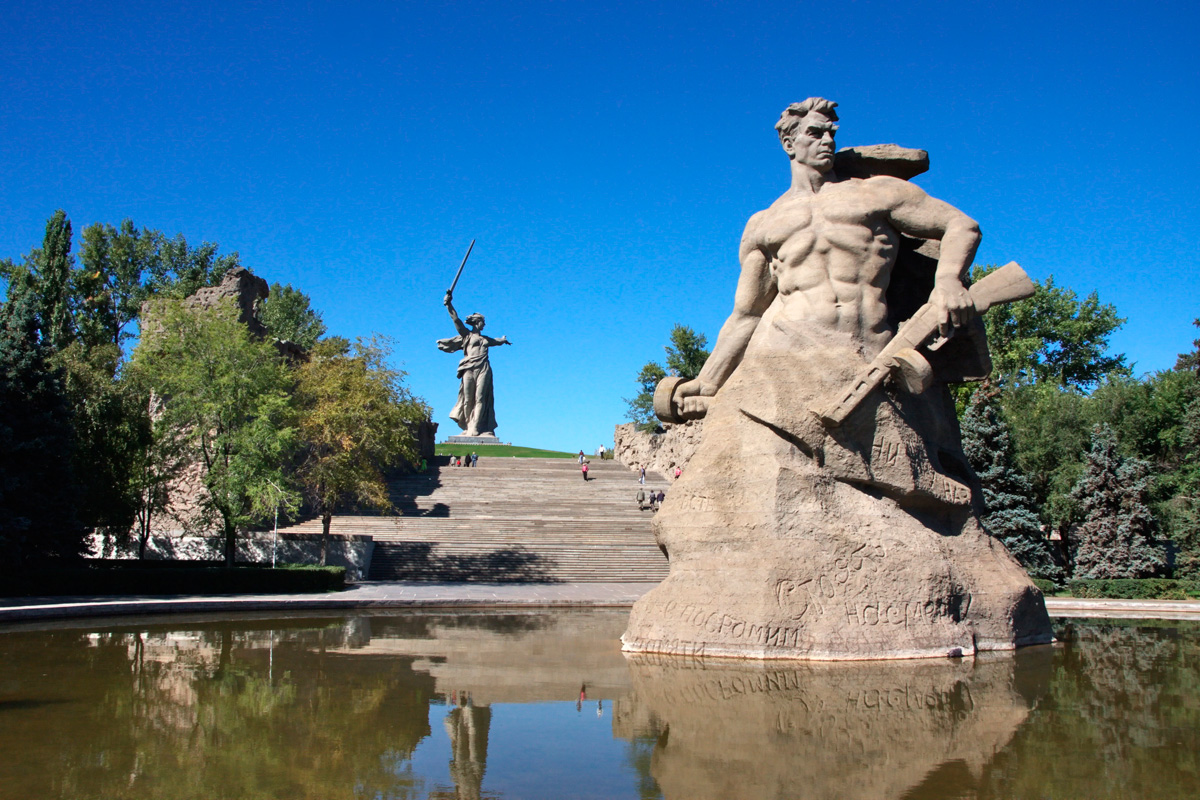 Volgograd (913 kilometers from Moscow), which in Soviet times was called Stalingrad, is the location of the bloodiest battle in world history where nearly 1.5 million people perished. In July 1942 the Red Army defeated Hitler’s Eastern front army in the battle of Mamayev Kurgan, a fight that changed the course of World War II. The monuments have been erected on the spot where those events took place and are today the main sights of the city.

Most of the monuments devoted to World War II are concentrated in three areas located not far from each other: Heroes’ Alley (Alleya geroev), leading from the Embankment to the Square of the Fallen Fighters (Ploshad pavshikh bortsov); around the Panorama Museum of the Battle of Stalingrad; and in the area of Mamayev Kurgan. The best way to go from one place to the other is by the Metrotram that goes both above and below ground. 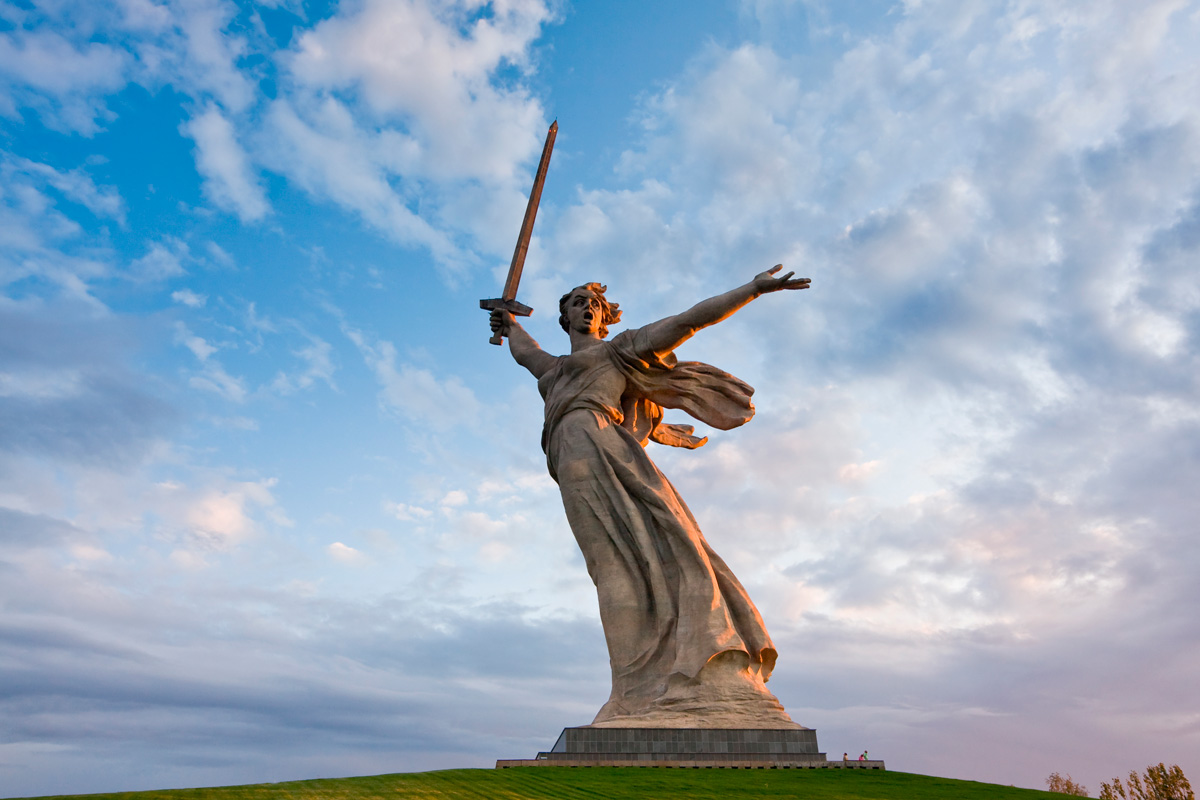 The minute of silence that periodically interrupts the music playing in the Mamayev Kurgan Museum can seem unbearably loud, while your steps around the area can sound extremely dull on the pavement. Of course, you learn all the frightening details of the Battle of Stalingrad in books or online. However, you’re impressions will be somewhat incomplete. To experience the depth of the tragedy of the war and to realize the extent of the losses suffered by the Soviet people, make a visit to the sites of Mamayev Kurgan and walk the 200 steps (one for each day of the battle) from the Memory of Generations monument up to the base of the Motherland Calls statue. Each step you take will solemnly remind you of the horrors of this battle and war.

When the Motherland Calls sculpture was erected in 1967, it was included in the Guinness Book of Records as the tallest statue in the world at 85 meters tall, not counting the pedestal. By comparison the Statue of Liberty in New York is 46 meters tall, while the statue of Christ the Redeemer in Rio de Janeiro stands at 38 meters.

St. Petersburg: Ploshchad Pobedy (Victory Square) and the Museum of the Defense and Siege of Leningrad 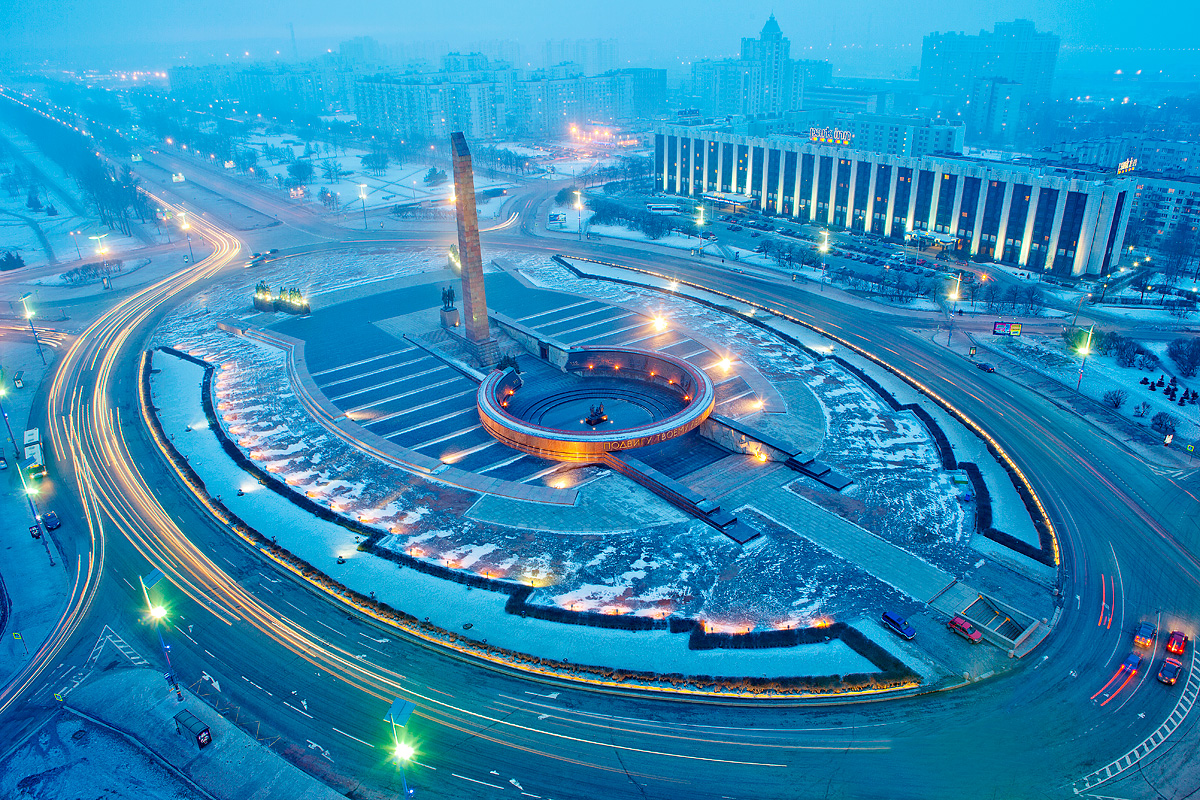 While the inhabitants and defenders of Stalingrad were dying in battle, Leningraders had to endure an equally horrifying experience: The 872-day siege of their city from September 8, 1941 to January 27, 1944. Of those that died 97 percent didn’t suffer from injuries, nor did they fight on the frontline, but perished instead of hunger and disease. As noted by American political philosopher Michael Walzer in his book “Just and Unjust Wars, “in the Siege of Leningrad more civilians died than in the hells of Hamburg, Dresden, Tokyo, Hiroshima and Nagasaki combined.” 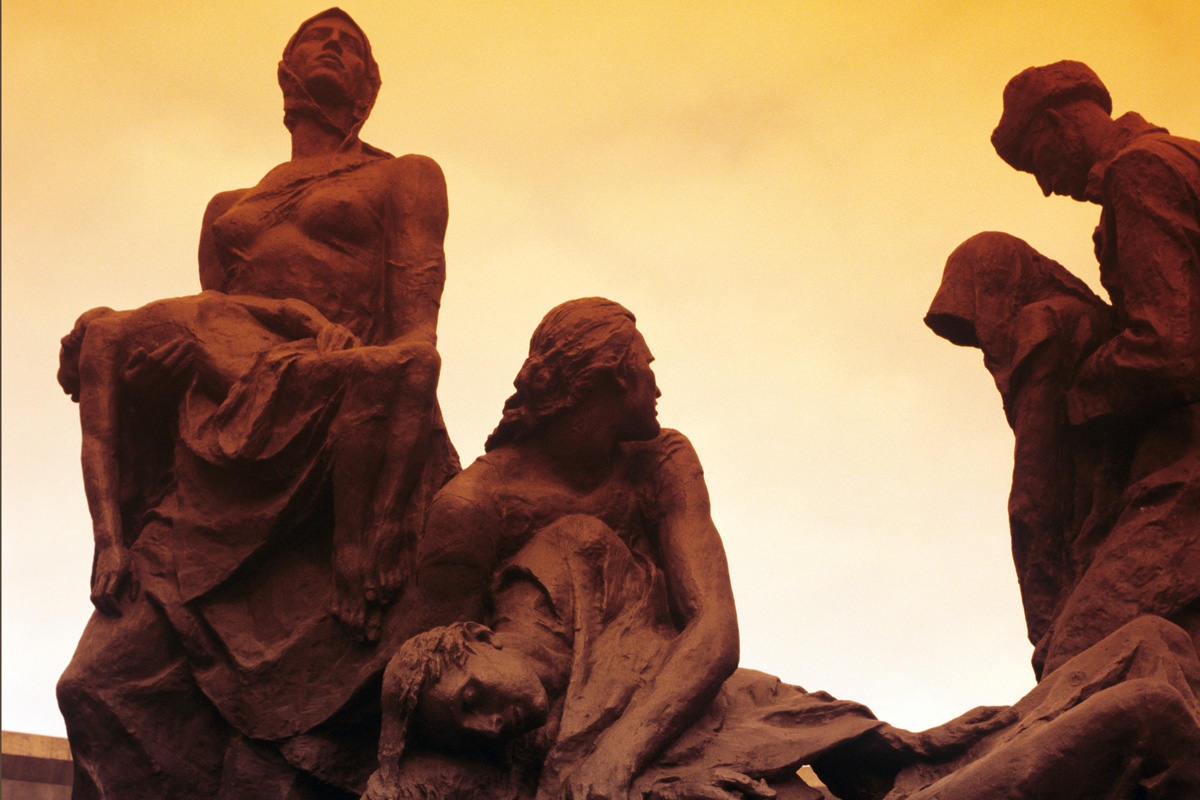 The monument to the defenders of Leningrad is located in St. Petersburg’s Victory Square and constitutes the center of this architectural composition. This is the most famous memorial devoted to the heroic deeds of city residents during the tragic days of the siege. Under the monument there is an underground Memory Hall museum, embellished by two huge mosaics called “The Siege” and “The Victory.” In the hall radio signals from Moscow can be heard, while on screens two silhouettes appear of the city under siege. A short documentary film is shown accompanied by Dmitry Shostakovich’s Symphony No. 7, which he completed in late 1941 and dedicated to the residents of Leningrad. It became popular as a symbol of resistance to Nazi militarism. 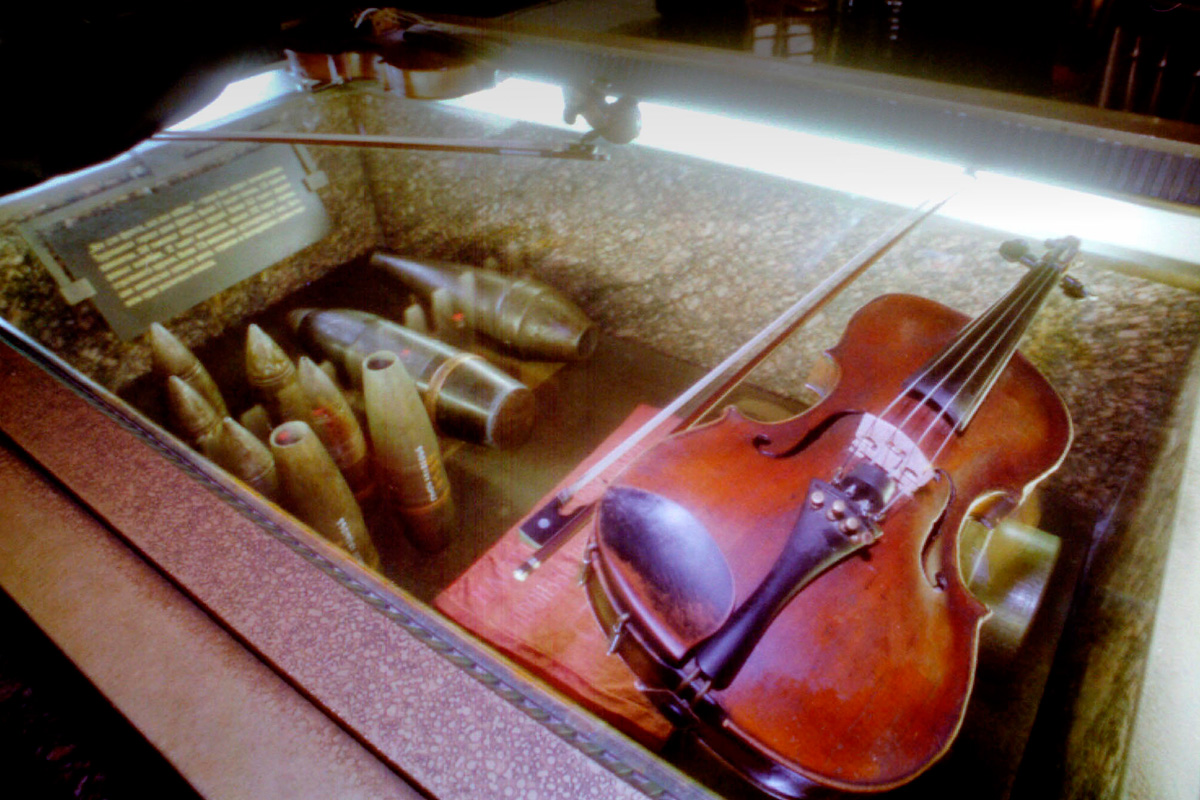 At the Museum of the Defense and Siege of Leningrad you can get a more personal sense of what life was like during the blockade through the eyes of ordinary Leningraders. There’s a reconstruction of a Leningrad flat at the time of the siege and on display are examples of weapons and personal items belonging to the city’s defenders, while piercing air raid signals ring out through the museum. 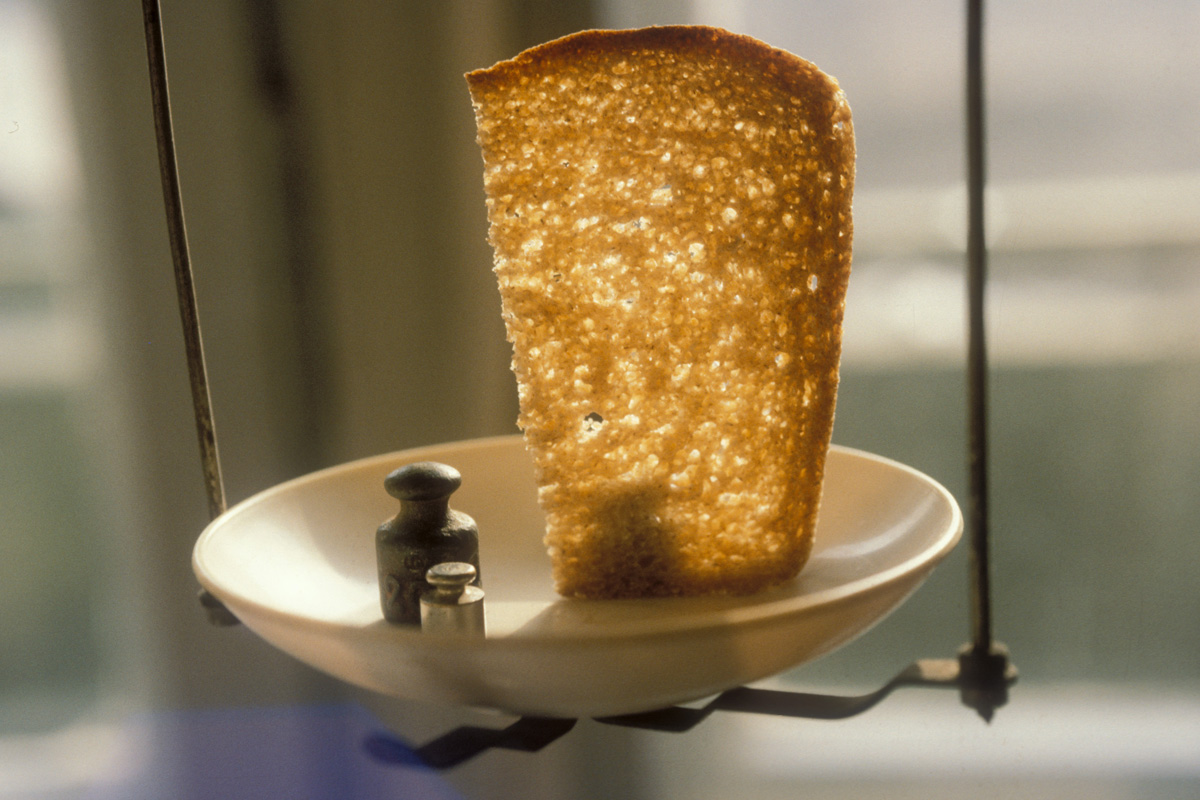 The pitiful rations that Leningraders existed on are also explained here: For example, a 125 grams piece of 'siege bread' was made on the whole from rye flour of rough grinding stock and hydrocellulose. 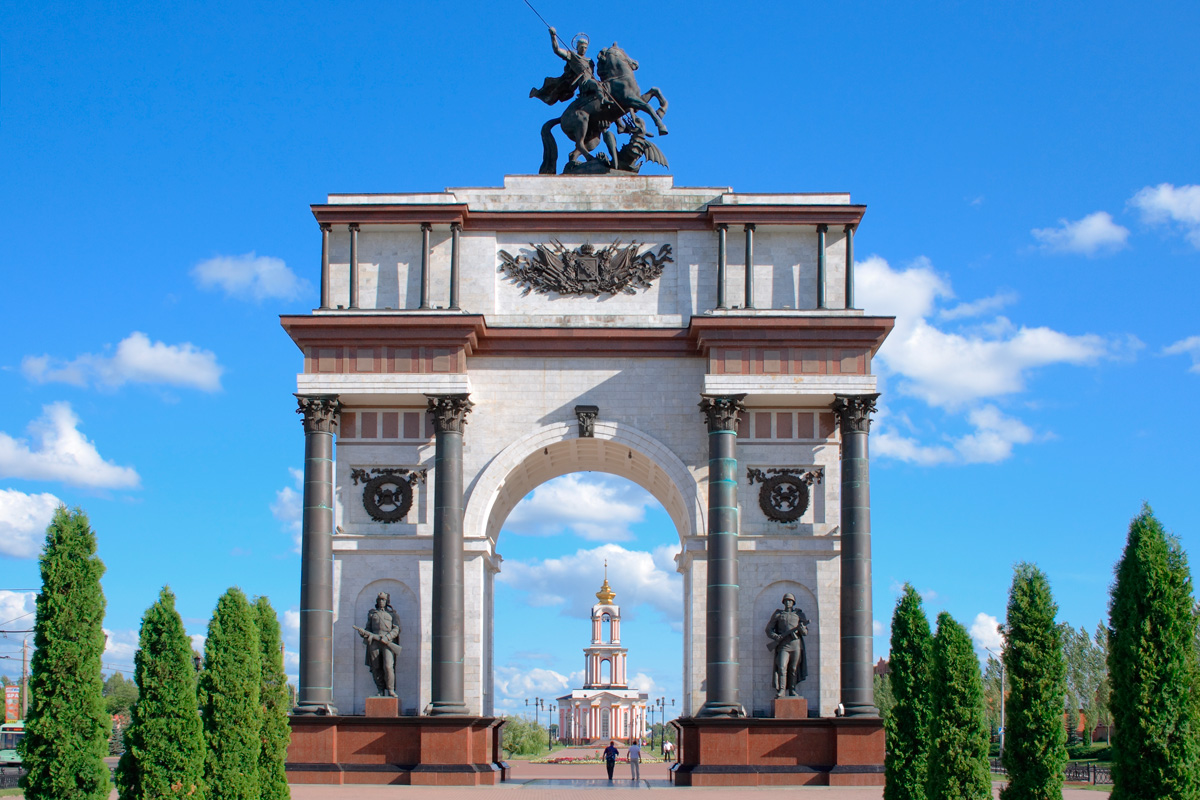 The Battle of Stalingrad marked a turning point in the course of World War II, but its success would not have been consolidated without the July 1943 Battle of Kursk (457 kilometers from Moscow). Its geopolitical significance went well beyond the Soviet-German front, as it put pressure on the Germans and ruptured their alliances. The Battle of Kursk also made history as the biggest tank battle ever: About two million people, 6,000 tanks and 4,000 planes participated.

The monumental Battle of Kursk memorial park is located in the northern outskirts of the city. The park is set up in the form of an alley one kilometer long with a Triumphal Arch, a monument to Red Army Marshal Georgy Zhukov, the Church of St. George, the Tomb of the Unknown Soldier and an eternal flame. There is a memorial stele in the shape of a Doric column with a cartouche with the Russian President’s text bestowing the title of Hero City to Kursk. The complex also includes an exhibition of military equipment, a cannon, howitzers, a T-34 tank, a “Zveroboy” mobile artillery piece and the famous Katyusha rocket launchers. 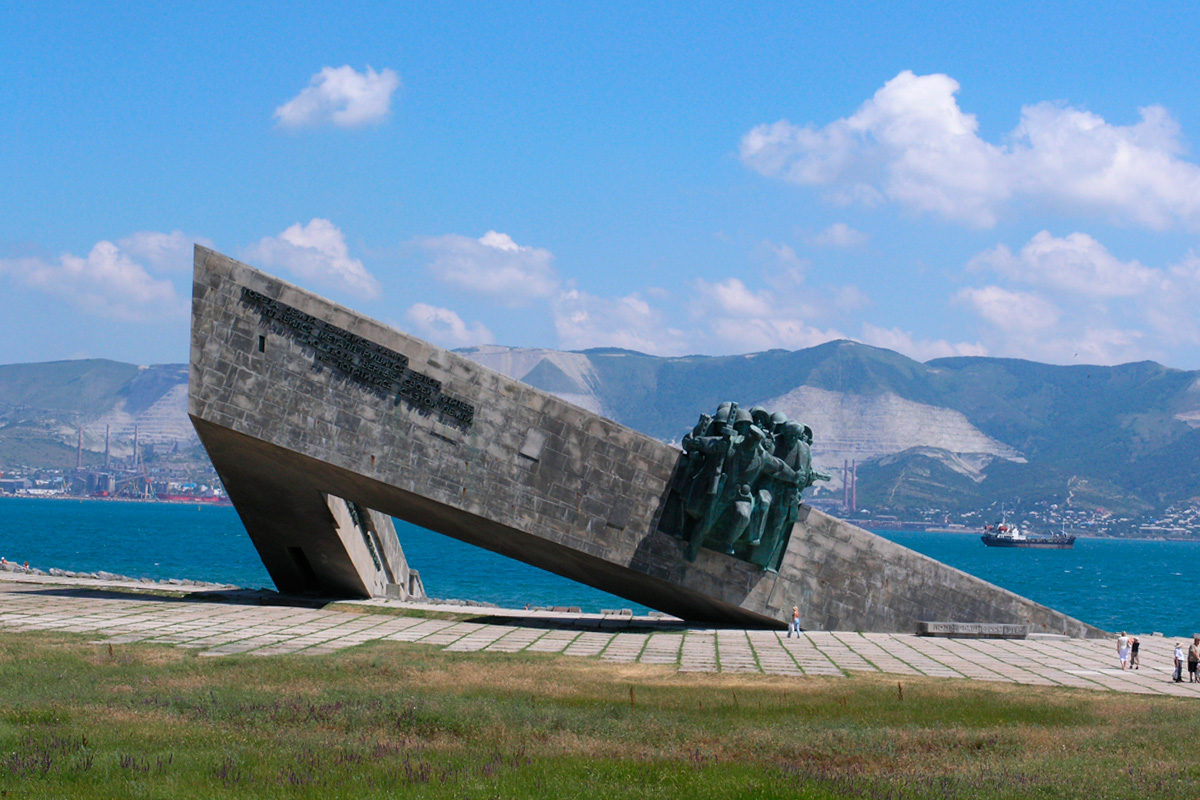 The dramatic events of World War II also affected Russia’s South. The most famous episode from this part of the front was an amphibious operation launched by the Red Army in February 1943. It resulted in the establishment of a bridgehead called Malaya Zemlya (Little Land) south of Novorossiysk (1,466 kilometers from Moscow). The heroic defense of this strip of land lasted 225 days and ended on the morning of September 16 with the liberation of Novorossiysk from the Nazis. A consequence of this victory was that a counteroffensive, which played a crucial role in defeating Germany in the Battle of the Caucasus, was launched.

The Novorossiysk Malaya Zemlya State History Museum is located on the Black Sea coast. Malaya Zemlya’s main monument is a huge spatial composition in the shape of the prow of a ship heading towards the shore at full speed. From here a view opens up on Tsemess Bay where much of the ruthless fighting took place. To this day near the monument you can still find remnants of the 1943 battle: Communication trenches, ditches and observation and command posts. Inside the monument there is a museum and an exhibition of military equipment from World War II is located nearby. 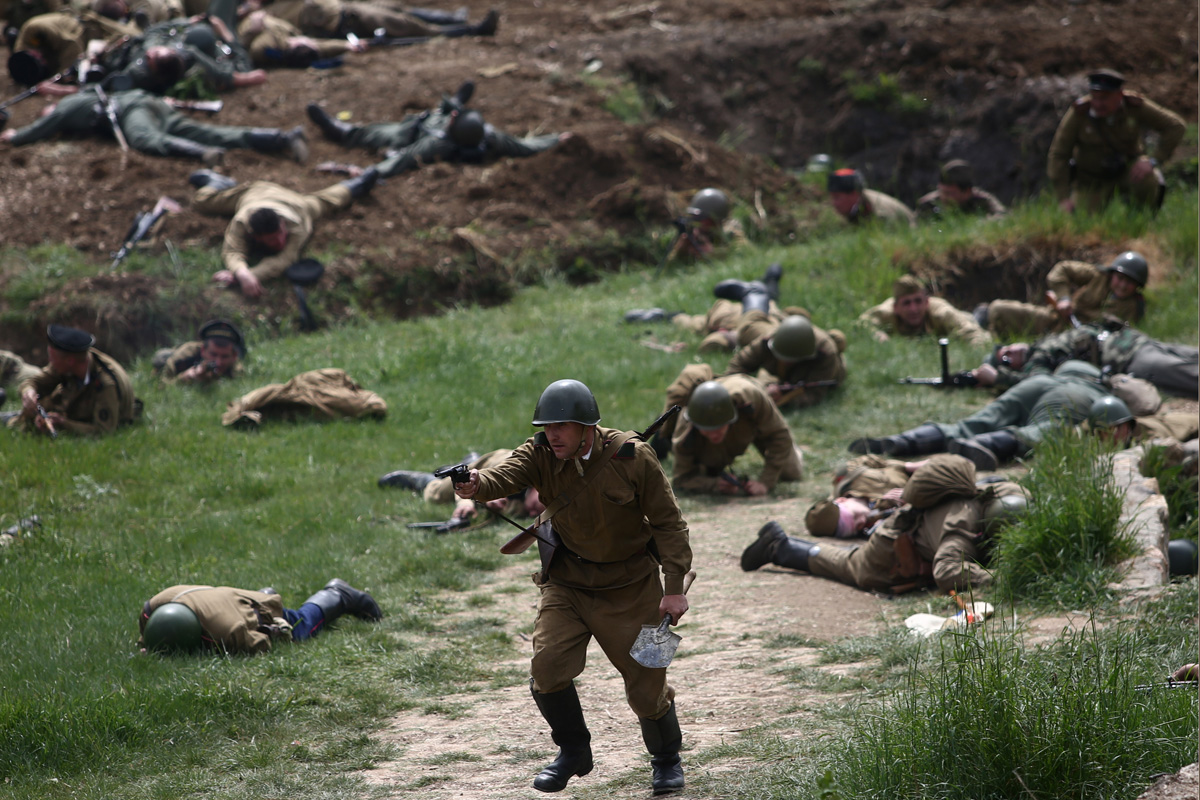 May 7, 1944, afternoon. The bushy Mount Sapun, which extends for seven kilometers to the turquoise bay of Balaklava, protects Sevastopol to the south. The attack on the mountain lasted more than seven hours. Its summit is not distant, but the last steps to the top are also the most difficult ones. Every trench, every hill is part of the theater of battle. The enemy fortifications are attacked by the infantry, the sappers, the tanks and the artillery. A battle breaks out in the air. At that moment Soviet motorboats supporting the navy air force destroy the enemy ships.

This is precisely the image of the battle that visitors find themselves in when they enter the hall of the world’s biggest diorama that shows the attack on Mount Sapun on May 7, 1944 in Sevastopol (1,237 kilometers from Moscow). Impressions are reinforced by a thematic map that fills in the eight-meter distance between the observation point and the painted surface. 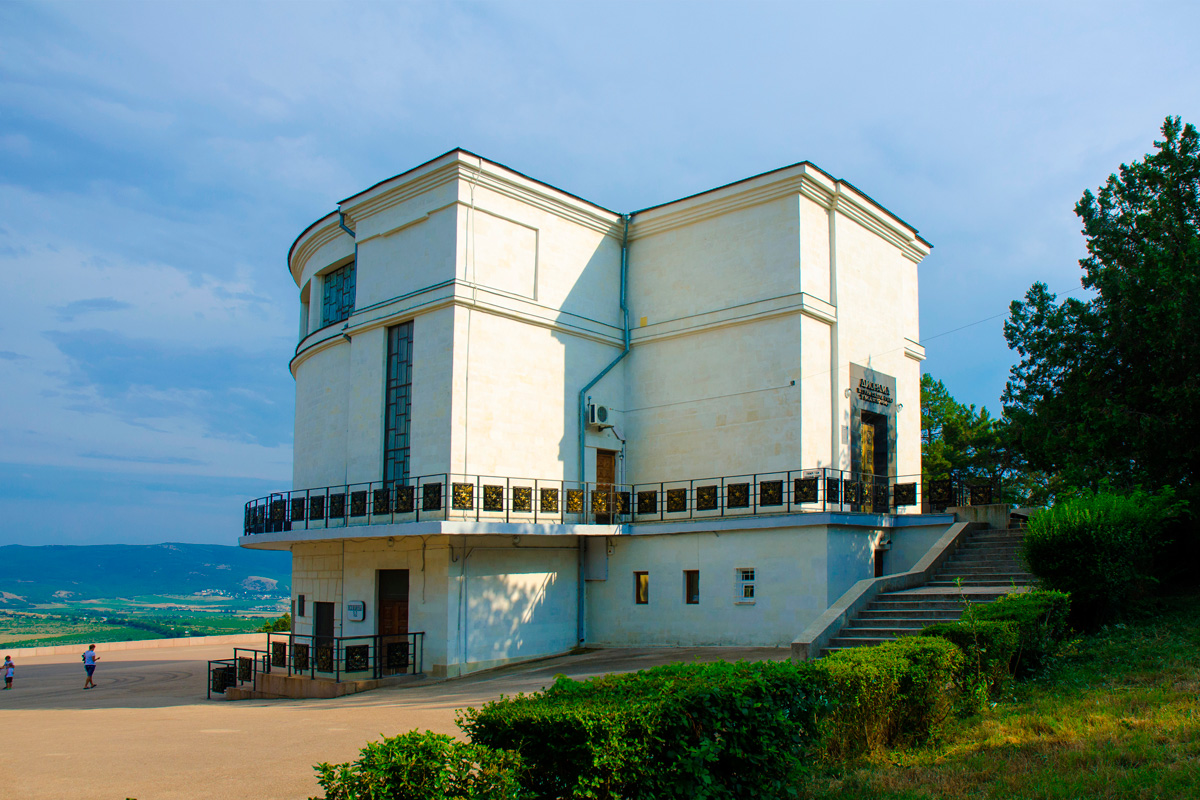 Here the authentic profile of the scene is reproduced, scarred by bullets and holes produced by bombs. There are life-sized replicas of armored vehicles, trenches, weapons, splinters and shells.

It is worth visiting Mount Sapun not only for the diorama, but also for the wonderful panoramic view of its surroundings. Nearby is the towering chapel of St. George built in the shape of a bullet, and an exhibition of military equipment from the war.