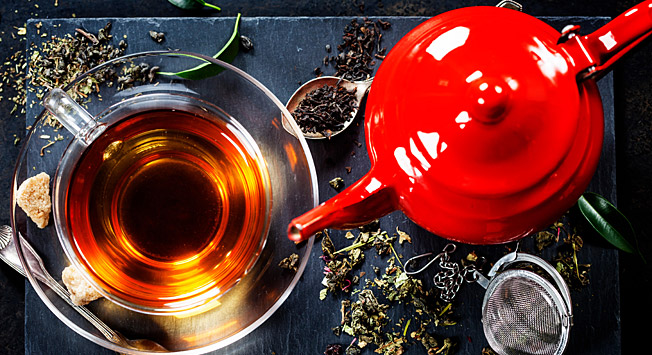 Alamy/Legion-Media
I pour some tiny violet flowers of thyme in a glass teapot, I add dried leaves of melis and currant and then I add a pair of leaves of a high-mountain rhododendron plant known as sagaan dali. I watch the flowers and leaves slowly unfurling in the boiling-hot water with the water becoming a pleasant grassy color. In five minutes the kitchen is filled with gentle but distinctive smells of taiga, mountains and ripening wild berries, the aromas of Siberia.

Tea “vprikusku”
From the earliest times it was common in Russia to drink tea through pieces of sugar (vprikusku). The vprikusku ritual involved chipping small pieces of sugar from a bigger lump, then the drinkers would put a small piece of sugar between their front teeth and sip hot tea through it, which is how the drink acquired its sweet taste. Igor Shein, a researcher of Siberian cuisine, says that one wouldn't be able to do this using a cube of refined sugar today because it has a different consistency. 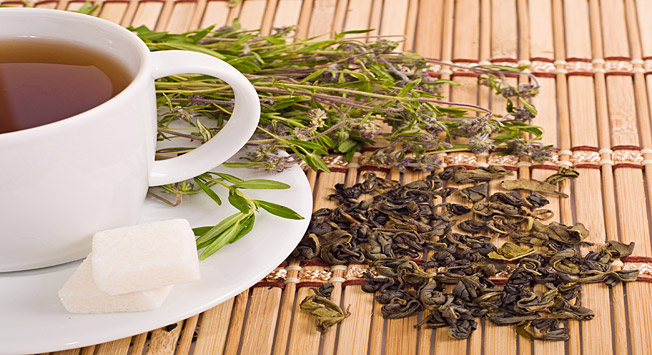 In the past Siberians used to drink tea vprikusku, but there was another local variation of this word: “s prikuskoi” (meaning “with something to eat”). “The Memories of Siberian Life” published in 1895 says, “The host asked us if we drink tea ‘s prikuskoi’… It turned out that drinking tea ‘s prikuskoi’ means eating sweet pie, pastry or cake baked at home to go with tea. In Siberia it meant drinking tea with curd tarts, jam, and biscuits.” 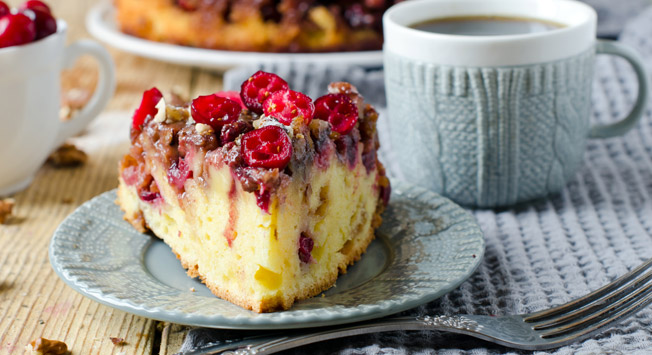 Photo credit: Lori/Legion-Media
Tea has always been a very important drink in our land – for peasants, merchants and noblemen. At the beginning of the 20th century, the governor of the Tomsk region ordered the abolition of taxes on discretionary goods including tea. In contemporary Siberia sipping tea through a piece of sugar is most common for elderly people. But serving pastries is still a necessary element of the tea drinking ritual and you can easily see it for yourself when dropping by any Siberian home.

Tea with milk and salt
By comparison Siberian nomads – such as people from Tuva, Khakassia and Altai – used to drink tea with milk and salt. Of course, this tea custom is not purely Siberian, as since ancient times this kind of tea was popular in Mongolia and Tibet. This is why there are many recipes for salty tea all over the world. 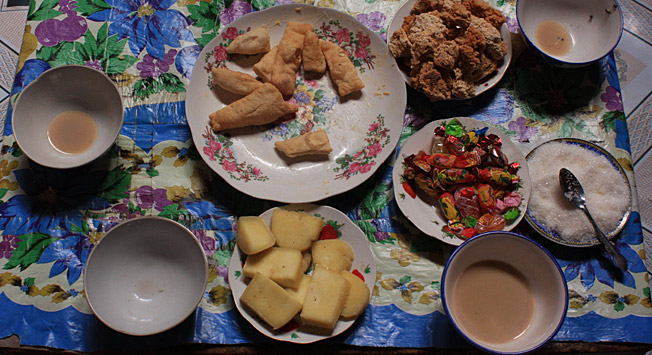 In Tuva tea is called “suttug shai.” The ritual here involves placing pressed green tea in cold water that is brought to a boil. Then milk is added – camel or sheep’s milk is preferable as this is how their ancestors used to brew it. After that, the tea is stirred – the liquid is scooped up with a big spoon and poured back from above and the tea is mixed in this way. When the drink starts to boil for the second time salt and sometimes melted fat or sheep lard is added. When ready this salty and milky tea is served in tea bowls called a “piala.”

This drink has been cherished by Tuvans for centuries: it is perfect for quenching thirst and it gives its consumer a lot of energy. These qualities were particularly important for the nomads that used to chase after their herds for miles and miles across the wilderness. In cold seasons when there was only cold water and ice on the steppe and in the mountain rivers, this hot tea would warm up the shepherds and prevent them from freezing. Today salty tea with milk is offered in Tuvan roadside yurt-cafes, in cafes and restaurants serving their national dishes in the cities and towns. The Tea Yurt (Chainaya Yurta) in Krasnoyarsk and Omsk offers this national Tuvan tea and invites guests to take part in a brewing ceremony where legends and stories about this Siberian nomadic tea are told. 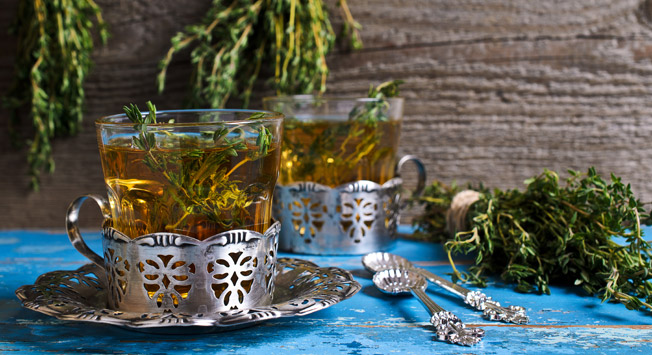 Photo credit: Shutterstock/Legion-Media
Herbal teas are beloved in Siberia most of all. When your average Siberian is going to have a picnic, they will most likely take a thermos bottle not with a standard black tea bag inside, but a drink made from a mixture of wild herbs. If you drink a cup of such tea at work, in the office, you will feel like you have just been on a walk through a forest in summer. Siberians add plenty of herbs to their tea. 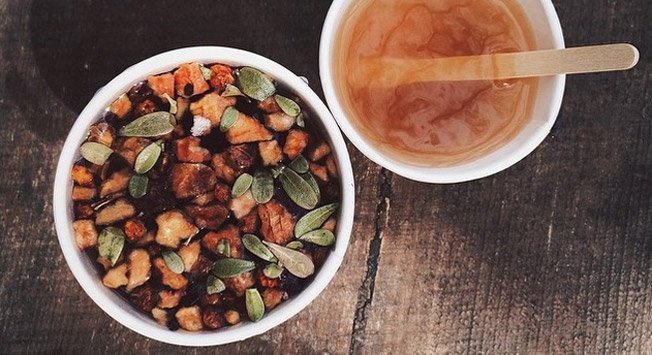 Photo courtesy: Natalya Alexandrova
In the mornings, instead of a usual cup of coffee I drink black tea with several leaves of sagaan dali – a bushy rhododendron plant that grows high in the Sayan Mountains, Tibet and the foothills of Buryatia and has a toning and energizing effect. Tibetans used to say that sagaan dali leaves were, “the herb that extends life.”

In order to achieve the opposite effect and calm down, relax and fall asleep, Siberians brew thyme, melis, leaves of currant and origanum. Herbal tea is drunk in Siberia with honey, lindenberries, cherry-tree pie and cedar seeds. If you are lucky, in a Siberian home you will get to taste a hardy, yet aromatic fir-tree drink. The popularity of Siberian herbal teas is gradually spreading throughout Russia, far beyond their place of origin.