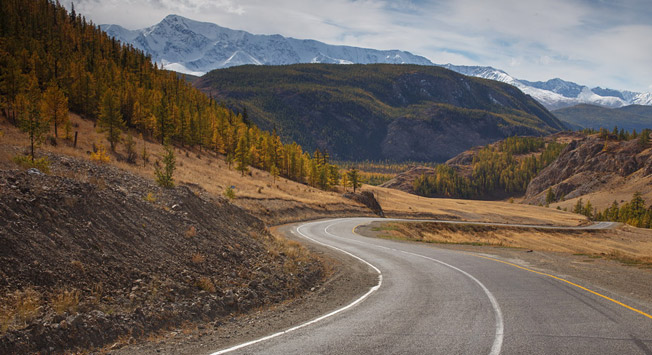 Alexandr Nerozya for RBTH
The Chuysky Trakt, which rambles on for about 1,000 kilometers, starts in Novosibirsk (2,812 kilometers from Moscow) and extends across the Altai Territory and the Altai Republic down to Russia’s border with Mongolia. This is Siberia’s most beautiful asphalt road and it impresses even the most well travelled among us: here the views of small villages are followed by mountain landscapes. It’s only after the appearance of Mt. Belukha’s snow-capped peaks that the real steppe begins.

Last year the Russian edition of “National Geographic Traveler” included the Chuysky Trakt on a list of the top-10 most wonderful roads trips in the world. They consider it to be on par with the Dalton Highway in the U.S. and National Route 40 in Argentina, noting that, “crossing the Chuysky Trakt is like crossing the whole of Russia.” 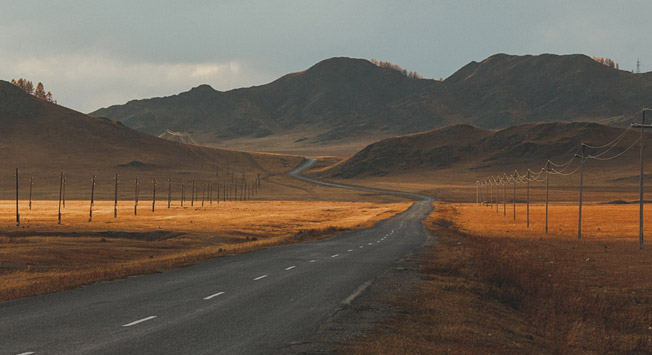 There is a close historical connection between this road and the history of the Altai as the Chuysky Trakt is its main commercial and most vital road. As early as 3,000 years BC in southern Siberia drovers equipped with sticks would travel on caravans laden with goods from all over Asia laying the foundations for the northern branch of the Great Silk Road.

Until the very beginning of the 20th century the Chuysky Trakt remained a dangerous mountain path that merchants and traders could cross only on horseback. It was only in 1901 that construction began on an actual road. In the 1930s construction continued with local labor along with prisoners from a nearby camp taking part.

Today the M-52 highway, as it is now known, is paved. Annually it is crossed by many thousands of traders from Asia and Siberia, but also by travelers from all over Russia and abroad.

The adventures of foreigners in Siberia 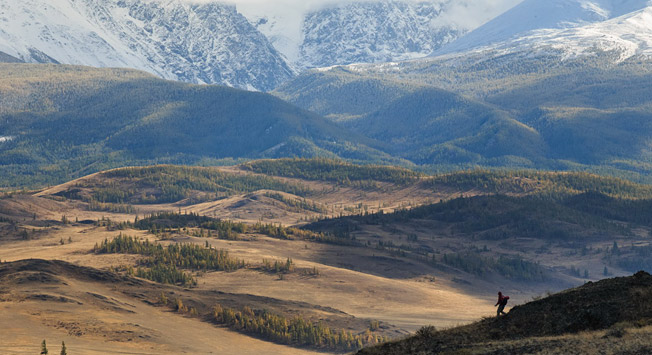 Despite the remoteness of the Altai region and its distance from Russia’s capitals, many foreigners come here. The photographer Heidi Bradner, well known for her photo essays of Siberia, Alaska, and Chechnya took part in a Russian photographic exploration of the Chuysky Trakt entitled “Lyudi na granitsakh” (People on the Borders).

A particularly interesting trip through the Altai was taken by Brian Dupee and Zand B. Martin, who crossed the Tract by bike in May 2014 before continuing on to Mongolia, Kazakhstan and China. On their blog the two cyclists wrote:

“The road drops down and we find our way over plateau and valley back to the Katun, and a cold, dry steppe climate. The road is good, and easy to navigate: if you leave the spiderwebbed asphalt, you are going the wrong way. This 500 kilometer line runs through the heart of the range, and we follow it over passes and through small log villages clustered around shingled rivers. Confederations of sheep and goats wander thawing hillsides under the occasional watch of dog and motorcycle-borne shepherd. Cows and pigs march the paddocks closer to home, though the pigs fade from prominence as we transition to a Muslim minority in the mixed ethnic map of Russian, Altai, and Kazakh. The Altai here is religiously diverse, with Russian Orthodox, Islam, Tengrism, Tibetan Buddhism, and less organized belief systems often called Shamanism, but really more a blend of animism and ancestor reverence. As we leave the Katun Valley for the last time and begin to ascend the Chuya, we pass our last church in Aktash village and enter the Chuya steppe, a dry, barren, high altitude grassland hemmed in by mountains. Entering the frontier town of Koch Agash, we pass our first mosque, a humble green timber affair with a crescent moon of beaten sheet metal on the peak of the hall.” 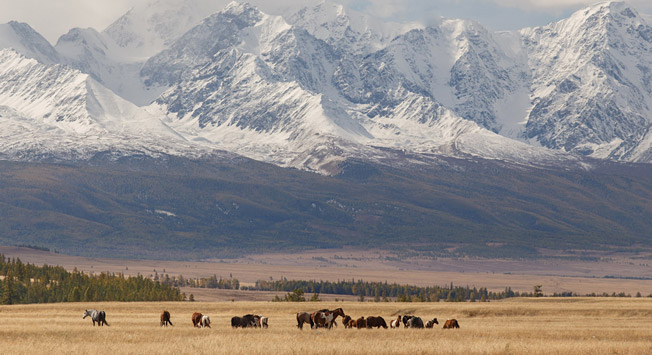 Both drivers and cyclists should devote at least one week to crossing the Chuysky Trakt, as there’s much to see. In Biysk visit the Museum of the Chuysky Trakt, while the village of Srostki contains a three-building museum dedicated to the famous Russian film director, actor and short-story writer Vasily Shukshin, who was born and raised here. Along the road you can also stop at the Tavdin Caves and Lake Teletskoye, the largest in Altai. Wonderful views on the road and on the mountains open up from the Seminsky Pass, while in the village of Zhana-Aul you can visit the Museum of Kazakh Culture, which is located in an authentic yurt. The Chuysky Trakt will help you understand how in the Russian, Kazakh and Altai cultures are intertwined here and allow you to feel the spirit of wild Siberia.

How to get there
A trip along the Chuysky Trakt usually starts in Novosibirsk, which you can reach daily by plane or train from St. Petersburg or Moscow. From there set out on the M-52 Highway, the only significant road in the Altai Territory and Altai Republic. Along the road you’ll find hotels, petrol stations and cafés offering European, Altai and Kazakh dishes.

However, since the southern part of the Chuysky Trakt is more isolated and has no hotels, it is advisable to carry a tent, a sleeping bag and a camping stove. Those wishing to travel by bike should bear in mind that it’s not an easy trip: the road can be quite steep and winding. There are no specific tours devoted to the entire Chuysky Trakt, but several tour companies offer sections of the famous road in conjunction with other activities in the region.