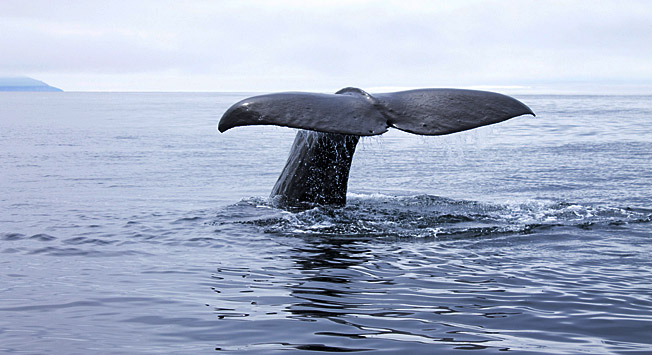 Diana Serebrennikova
In June 2014 whale specialists went to Paramushir Island in the Kuril archipelago to find out what type of killer whales inhabits this unexplored area, but they encountered more than just whales. RBTH publishes excerpts from the team’s diaries written during their mission to the Russian Far East.

For about a month, the expeditionary team lived in a small house on the shore of the Sea of Okhotsk in Shelikhov Bay, along with specialists from the Far East Russian Orca Project (FEROP). One day when the sea was calm these biologists and natural scientists went to sea in search of killer whales.

The story goes that the Ainu people – indigenous inhabitants of Kuril Islands – never hunted killer whales, because they considered them sea gods. However, these idyllic relationships have become legends.

Journalist Diana Serebrennikova had a chance to join the scientists in observing these intelligent mammals in their natural habitat.

From the diary of the photographer Viacheslav Zametnya:
“I dreamed about killer whales before going out to sea. And after couple of fruitless days we met several families at once at Luzhin Strait. We filmed the material we needed for identification, took a biopsy and made recordings of vocal dialects. Everything went well.

We stopped working in the late afternoon due to a sand storm. Heavy fog started to fall on Luzhin Strait. Visibility became much worse. There was a wall of milky fog around our boat and the loud languishing sighs of killer whales were coming from there. Unusual sounds were coming from all around. At once the ocean created by Tarkovsky in ‘Solaris’ came into view.

There was no chance to locate our lost boat in this fog, and we decided to go back to the camp, staying close to each other. It turned out that in pursuit of the killer whales we had moved almost 40 kilometers away from the base.

We started bouncing up and down on the waves in the heavy fog. Suddenly someone shouted: ‘Humpbacks!’ I peered into the fog and saw gigantic shadows quickly shooting past… I was scared.

Photo credit: Viacheslav Zametnya
We reached the possible location of the whales and silenced the engines. Anticipation was high. We were literally boring holes in the space around us. Silence hung and we could hear the sound of the boat swinging on the waves. I was standing on the prow turning my head in all directions. Tension mounted.

At once, a whale of royal dimensions flew out from the depth creating an enormous wave. The seagulls flying above the water were demolished as if by a blast. The humpback whale was flapping its white fins in the air. Time stood still; the whale was completing a chandelle maneuver. It turned around and crashed on its back and the wave spread from the swirl it made."

Later biologists told us that it was a female with its baby. And the ‘infant’ was playing with us. It could easily have turned over our boat as if it was made out of paper.

From the diary of the journalist Diana Serebrennikova:
July 7
“We settled in a fisherman’s house and spent our day cleaning the territory: sorting junk and burning trash. The guys caught their first trout. There was so much fish. This is great, because if a typhoon comes we still would have a chance to survive by catching fish for food, even after our buckwheat supply runs out.”

July 13
“A fox came to visit us the day before yesterday. It was probably not happy about us cleaning the place and occupying the empty fisherman’s house on the shore. Therefore the fox ate our fish. This morning near the wash area I ran into this sly creature when it was trying to steal our food once again. I managed to outrun the fox and hide our fresh fish from it. The fox can provide fish for himself – the river is filled with trout.”

Photo credit: Diana Serebrennikova
July 14
“We finally met the killer whales yesterday! First we heard one voice through a hydrophone receiver and then we saw multiple black fins couple of kilometers away from our boat. There were about 12 individual whales there. They were breathing out in unison and moving south to the Pacific Ocean. Soon the group split up to start hunting salmon. We could see male killer whales hunting: it was circling the fish and catching it at a lightning speed, jumping out of the water.”

From the diary of the photographer Viacheslav Zametnya:
“The morning fog started to fade away and the sun came out. It was too late to go out to sea, so I decided to explore an area where a bear had been spotted a couple of days ago. I did not wait long. After a few minutes I saw a huge bear shoot out around the bend of the river. It was running through the shallow water catching salmon.

I quickly put on my wader pants, grabbed a camera and a pyrotechnic signal to make a firework go off if the bear tried to get too close to me. Polina – a petite red-haired traveler from our team – decided to come with me.

We soon reached the mouth of the river, where the bear was playing about 10 minutes ago. We slowed down to plan our actions. It was not wise to follow bear’s tracks to the opposite side of the river into the high grass. So, we decided to carefully peek around the corner, but there was no bear there. I breathed deeply and relaxed. We watched the river and talked about our plans. I suddenly felt a disagreeable burning sensation of someone else’s presence.

I turned my head and was astonished…a huge bear stared at us from behind the bushes standing up on its hind legs.

We looked at each other for a few seconds. I think we survived thanks to Polina. The bear took its time evaluating the size of its enemy, and Polina must have added points in our favor: apparently the bear was nearsighted (as many bears are) and it must have perceived us as one large animal.

Photo credit: Viacheslav Zametnya
The huge animal got down on its four paws and started walking away slowly, while we backed out quickly. We stopped when we felt safe enough. The adrenaline rush slowed down. We were sure that we would not meet any more bears today, so we forded the river and sat down on the sandy bay.

Suddenly we heard something splashing into the water near the sandy cape. It sounded like a huge animal was running in our direction and the roar of splashing was fast drawing near. We were separated only by the cape, and something huge was about to face us. I rushed to the camera simultaneously trying to separate Polina from danger. I do not even remember grabbing the pyrotechnic signal. At the same time the bear, which had gotten carried away with fishing and was moving at an incredible speed, jumped out from behind the cape.

I did not know what to do: should I shoot or should I take pictures?

However, when the bear saw us it jumped into the water and swam to the far bank. I did take a couple of pictures.

Polina and I were shaking the whole way when we walked back to our camp. When I was finally safe, I decided that I have seen enough bears for one expedition.”