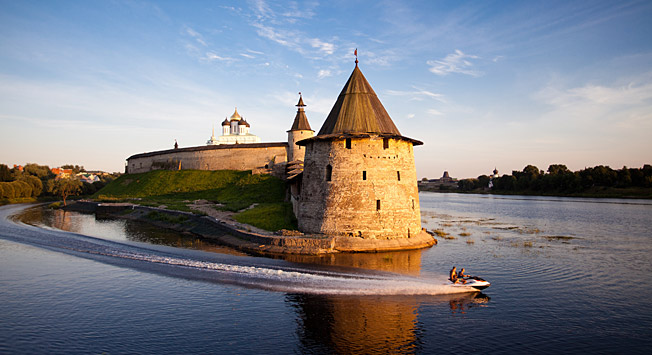 Shutterstock/Legion-Media
Almost 250 years older than Moscow, Pskov was first mentioned in 903 AD. Until the construction of St. Petersburg in the 18th century, Pskov had been one of Russia’s most important defense and trade centers. Today’s population is roughly 200,000.

The decision to go to Pskov in June was a spontaneous one. Our train arrived at the station at about noon. While looking for a map of the city my co-travellers and I stumbled upon a large stone tablet. It said that the last Russian Tsar Nicholas II abdicated the throne at this very station in a dining car nearly 100 years ago in March 1917. Later he and his family were shot and killed in the Ural Mountains, but the act of abdication occurred more than 2,000 kilometers away from the site of tragedy. In memory of this event, Pskov residents erected a church on the station square.

From the station to downtown it’s only four blocks, so we went by foot. After lunch, we found a studio apartment for a one-night stay. In my experience, hotels are usually more expensive in smaller cities such as Pskov. The price of our apartment was half as expensive as a hotel room.

Silence in the Kremlin 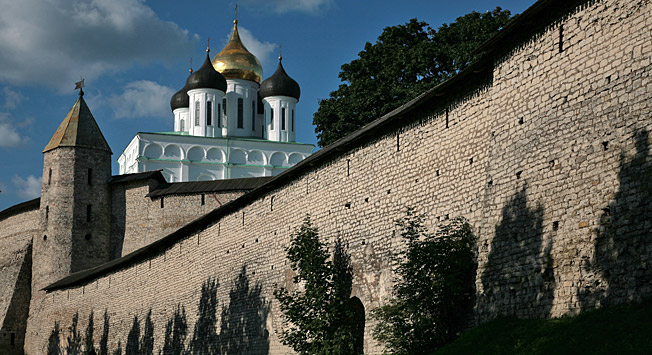 Pskov appeared to be surprisingly clean and not too crowded. As we found out later, the majority of the city's population was away. The country estate Mikhailovskoye is very close to the city, which is where Russia’s famed poet Alexander Pushkin lived and worked during various periods of his life. Every year on the poet's birthday, June 6, there is a two-day festival devoted to Pushkin and this event attracts locals and tourists from all over. A woman selling icons told us that on any other weekend there is hardly any room to move in the Kremlin because of the throngs of tourists and pilgrims.

During our visit, Pskov’s main place of interest was absolutely deserted. The watchtowers and fortress walls built in the 14-15th centuries differ radically from similar fortifications found in the cities of the Golden Ring northeast of Moscow. The unbleached walls are made of blocks and the towers are topped with cone-shaped roofs. 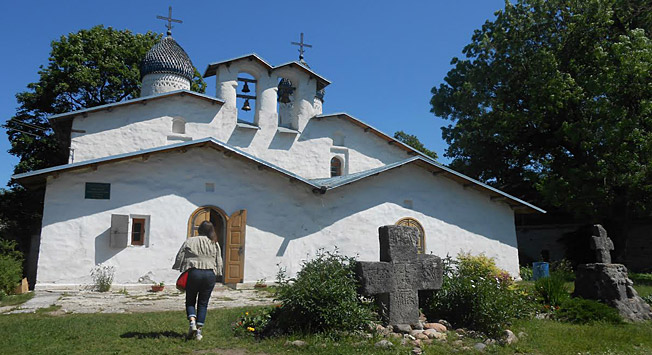 The influence of Baltic architecture is very vivid here. Inside the Kremlin there is an excavated settlement that was ruled by Prince Dovmont in the 13th century. At one time it was an impressive complex of defense constructions with walls, gates, churches and chambers. Today this is Pskov's Pompeii: the foundations of two churches discovered by the archeologists can offer a lot of details about what life was like in during the time of Prince Dovmont. You can get an idea here of what the homes of ancient Pskov residents looked like and an understanding of how they all managed to find room to coexist on this small piece of land inside the fortress.

Inside the Kremlin there is only one church, the Trinity Cathedral, constructed much later in a style typical for church architecture in the 18-19th centuries. When a service is being conducted, a church-goer stands at the entrance prevent any women without their heads covered inside. This guard of sorts also demands that females wearing jeans put scarves around their hips, thus making kind of a skirt. 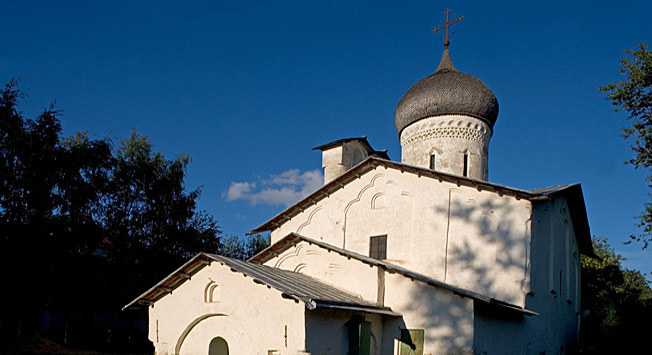 Slavs typically built their churches and monasteries on land surrounded by fortress walls in order to protect them from looting and enemy attacks. However, in Pskov the situation is different as many churches are located beyond the walls of the fortress. These churches look alike but they all are built in a unique style that differs from other Russian church architecture designs: a distinctive open bell tower, a single dome and an ornament called “the Pskov necklace” on the very top. I saw a similar ornament only once in Moscow in an Old Believers' church close to Belorussky railway station. All the churches we saw in Pskov were built before the Orthodox Church schism of the 17th century, so we can safely conclude that the Pskov necklace comes from earlier times. 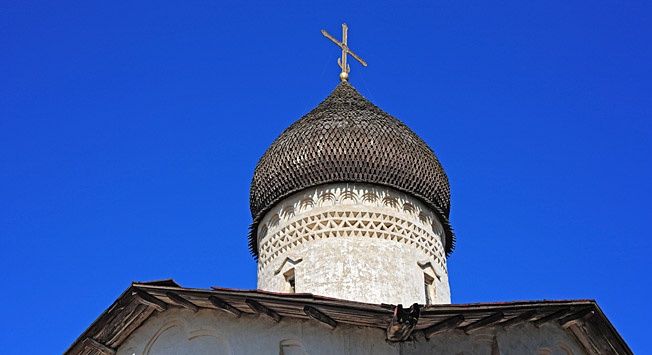 On the outskirts of the city we saw many old buildings in poor condition; the hands of restoration artists have not touched them yet. There are many renovations going on in Pskov, according to Artur, one of Pskov's young restoration artists. Artur is a former physical fitness teacher and has been restoring buildings for 10 years. The last two years he has been working here in Pskov. Artur says that he restores churches because this kind of work is well paid. Lately he has spent a lot of time learning how to carve Pskov's famous ornament. The Pskov necklace demands time, he says – not more than three or four bricks can be carved in a day and cutting the ornamental pattern through stone is not an easy task. 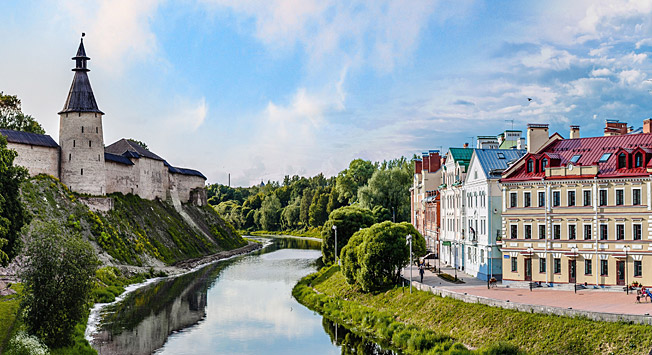 Arthur invited us to take a boat trip on the Velikaya River, which runs along the Pskov Kremlin, but we had to take the return train to Moscow. However, the ride by boat along the Kremlin walls seems like a great idea: the day before we watched as several dozen women in wedding dresses and a squad of photographers sailed along the waterfront, taking pictures against the background of the bright blue water. Looks like I’ll have to go back to Pskov for my own photo session some day.

To get to Pskov from Moscow take a train from Leningrad railway station or from Riga railway station. It will take you about 15 hours if you depart from the latter, and 11 hours if you take off from the former. Both trains depart from Moscow in the evening and arrive in Pskov in the morning. Pskov is located about four hours from St. Petersburg. The easiest way to get to Pskov from there is by bus. I would recommend staying in one of the apartments offered on Airbnb.