BAM! How to get the most out of a journey on Siberia’s other railroad 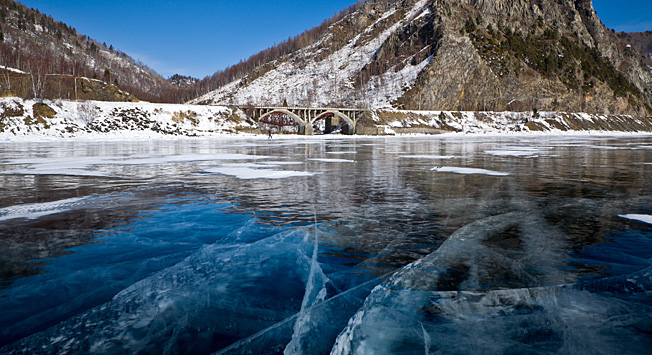 Lori/Legion-Media
RBTH Travel has collected interesting tidbits about the Baikal-Amur Railroad (BAM) that will liven up your Trans-Siberian journey, as well as a reading list to enhance your adventures.

The Baikal-Amur Railroad (BAM) is one of the longest railroads in the world. It begins in the Irkutsk Region, goes around Lake Baikal to the north, then crosses the Angara, Lena and Amur rivers before coming to an end on the coast of the Pacific Ocean. It’s 4,287 kilometers long (2,664 miles). That’s enough time for a patient traveler to drink a lot of tea from a steel-cut glass (the kind you can only find on Russian trains) and acquaint yourself with Siberia, your fellow travelers, the Russian point of view and local landscapes.

Tayshet – the first kilometer of the BAM 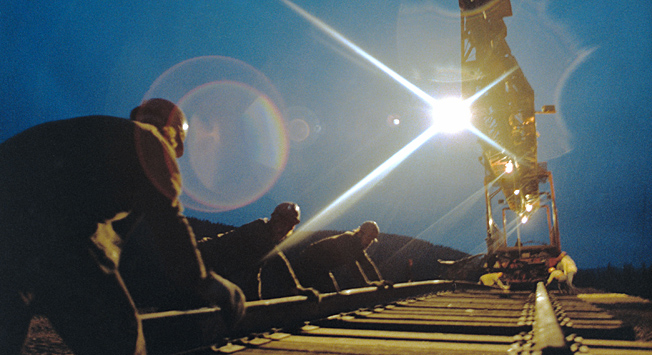 Photo credit: TASS
Among the objects on display at the Tayshet Regional Museum, where the BAM begins, is a note written by a young “komsomolka” (a female member of the Communist Youth League):  “I ask to be included in the All-Union shock construction project that is working on the BAM, because it is so romantic.”  It’s no secret that railroads in the USSR weren’t built just by young volunteers, but also by inmates of the BAMLAG (a subgroup of the GULAG), who laid the rails, gathered the necessary timber and installed 840 kilometers (520 miles) of the BAM Railroad between 1947-1958. Much documentary evidence has survived about their difficult living conditions.  “We have to work a lot. There are 12-hour shifts plus a three-hour walk from the camp to the work area and back. The food is very bad: slops with soy flour, sour cabbage and oatmeal [...] we wash ourselves without soap...” reads one exhibit.

Suggested reading for this leg: Anne Applebaum, "Gulag: A History" (winner of the Pulitzer Prize for General Non-Fiction).

Lake Baikal and the Baikalsky Tunnel 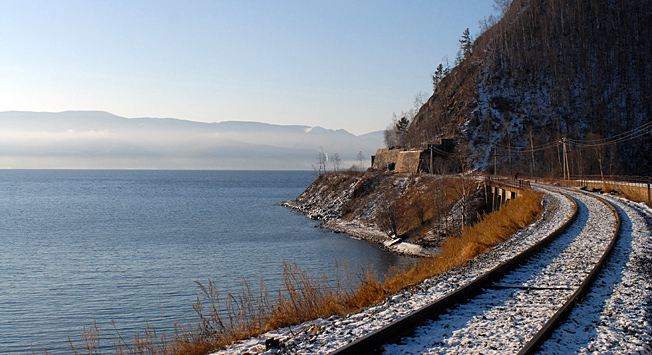 Photo credit: Photoxpress
After Tayshet don’t go to sleep: You’ll regret it if you do. Further on, the traveler will be met by the gorgeous Baikalsky Mountain Range and the Baikalsky Tunnel, whose length is 6.7 kilometers (four miles). More than 200 kilograms of explosives were used to blast through the rock here. It is during this part of the BAM that the traveler will first see Lake Baikal, and not just from the train window: the train stops at Severobaykalsk at the lake’s edge for about an hour. Quite often travelers get off the train, buy some smoked omul fish at the station and head to the nearby shore to bathe or simply admire the landscape.

Suggested reading for this leg: David Greene, "Midnight in Siberia: A Train Journey into the Heart of Russia." 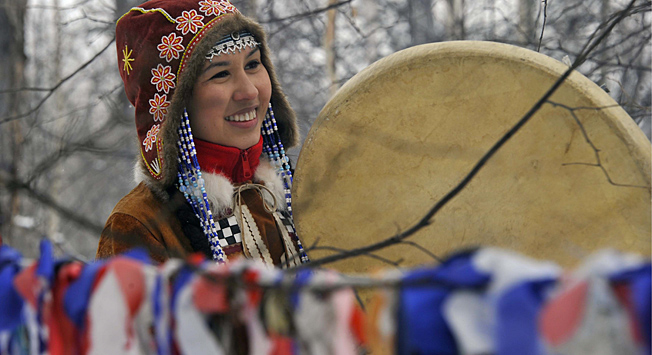 Photo credit: TASS/Alexander Petrov
Travelling along the BAM you’ll pass some small villages of interest for their distinctiveness. Consider stopping at the Buryat village of Kholodnoe Evenkiyskoe, next to the Kholodnoe station, whose population Russians, but also Siberian indigenous peoples such as the Evenki of the Kindigir tribe, whose ancestors were the first to arrive on Lake Baikal’s shores. At one time the Evenki used to set up their tents in the same place where the railroad now runs. Kholodnoe is a small village of 500 inhabitants, but it has its own ethnographic museum and two reindeer breeding farms.

Suggested reading for this leg: Anna Reid, "The Shaman's Coat: A Native History of Siberia." 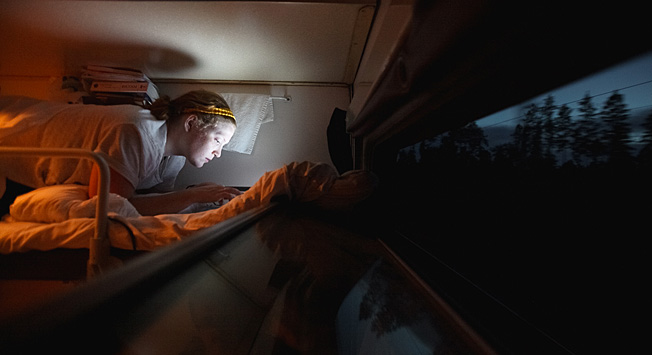 Photo credit: Anton Petrov
This is probably one of the most impressive parts of the BAM: It passes by the Severomuysky Mountain Range, which is covered with evergreen forests. Here in winter the views from the train window are striking: Mountains up to 2,500 meters tall that gleam white with a blue sky in the background or sleep mysteriously in the twilight. But the traveler should not hibernate during this segment of the BAM: between Novy Uoyan and Toksimo you will pass through the Severomuysky Tunnel, the longest railroad tunnel in Russia, which extends for 15,343 meters (9.5 miles). Its construction was one of the most complex projects in history: For 28 years its builders had to “subdue” the permafrost, landslides, avalanches and tectonic rifts.

Suggested reading for this leg: Ian Frazier, "Travels in Siberia." 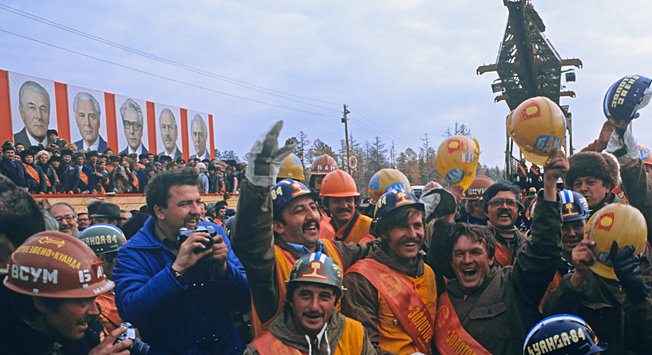 Photo credit: RIA Novosti
The small settlement of Kuanda, which developed thanks to the construction of the railroad, is famous because it was here on October 1, 1984 that the first “golden” ring of the BAM was laid connecting the final two parts of the railroad. Thus the BAM was inaugurated.

However the real joining of the BAM’s  “golden” rails took place before the official date: Two building squads, from the east and from the north, joined their railroad segments on September 29. However, this event, which thousands of people had been expecting, did not go off according to plan. That’s why two “golden” rings at Kuanda were removed and connected again on October 1, which had been the estimated day for the completion of the project. Images of Lenin, important officials and women wearing “kokoshniki” (ancient Russian headgear) were all in attendance. Ordinary builders probably celebrated simply by smoking a cigarette with a few fellow workers, having a drink and resting after a hard day’s labor.

Suggested reading for this leg: Colin Thubron, "In Siberia." 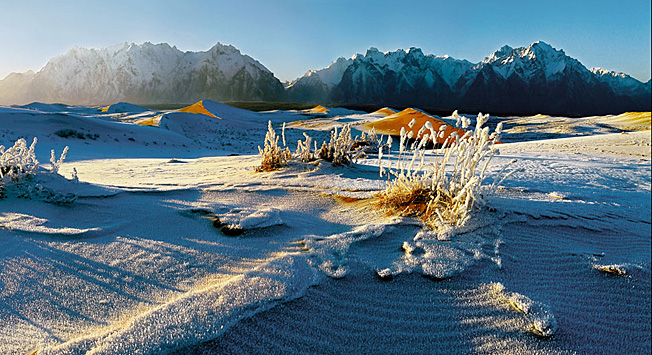 Photo credit: Alexander Lesnyansky
In Siberia’s Zabaykalsky Territory travelers are treated to one of the most unusual and fascinating places in all of Russia: The Chara Sands desert, surrounded by the taiga and the Kodar Mountain Range. Those who wish to see this Siberian wonder will have to get off at the small railway station of Novaya Chara (travelers visit year round). Those who want to reach the Pacific Ocean, should stay on the BAM until they arrive in Sovetskaya Gavan, only another 2570 kilometers or so (1,600 miles).

Suggested reading for this leg: Finish Greene’s book on this leg of the journey.