A city at the world’s edge: Walking Vladivostok with a local writer 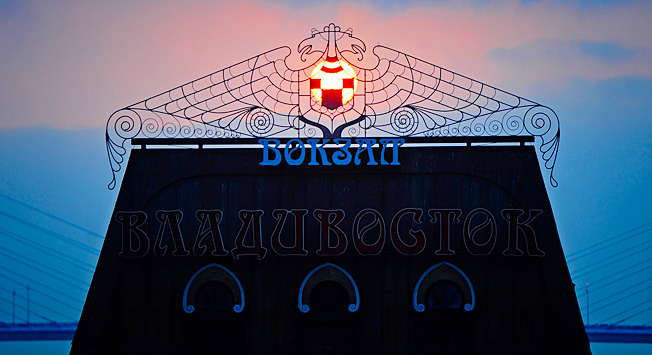 Yury Smityuk
This tour will take us along the city’s oldest streets Aleutskaya and Svetlanskaya. The military post Vladivostok was founded here in 1869 by Russian Navy officers. Starting at Privokzalnaya Ploshchad (Railway Station Square) we will turn from Aleutskaya Street to Svetlanskaya Street and walk along Zolotoy Rog (Golden Horn) Bay. Historical buildings, monuments and the sea can be seen from all over and the hills prop up the sky: even just this short route is enough to get a sense of the unique flavor and fragrance of Vladivostok.

Welcome to Vladivostok. We begin our journey from Vladivostok’s two transport hubs located side by side: the train station and the harbor terminal. The famous Trans-Siberian Railway ends here. You can find a tablet with number 9288, which indicates the distance from Moscow to Vladivostok in kilometers (5,771 miles). Let's begin our journey, friends! Adventure awaits.

Photo credit: TASS/Yury Smityuk
The main point of interest on Privokzalnaya Square is a monument to the founder of USSR Vladimir Lenin, who said: "Even though Vladivostok is far away, it's our city!" This is why Lenin is so deeply respected in Vladivostok even by those that are indifferent to Communist ideals.

Photo credit: TASS/Yury Smityuk
Please look to your left. This Art Nouveau style house built during the 20th century belonged to the Brynner family who were Russian merchants of Swiss descent and had a lead, zink and silver mining business. In the 1920s a boy called Yuly was born into the Brynner's family. The boy later became the famous Hollywood actor Yul Brynner, who starred in “The Magnificent Seven,”“The King and I” and many other Hollywood movies.

A few years ago the famous actor and Oscar winner was commemorated here with a statue made by sculptor Alexei Boky that was installed in front of the former Brynner's residence. Yul's son Rock Brynner, who often visits Vladivostok, was present at the ceremony.

Photo credit: Yury Smityuk
According to legend, the founders of the city were greeted by a tiger here, so the hill and the street were named in honor of this meeting. A tiger is represented on the coat of arms of Vladivostok and Primorsky Territory. Today there are only about 400-500 Amur tigers left in the surrounding Ussuri taiga. They are currently under protection.

Photo credit: TASS/Yury Smityuk
As we walk further along Svetlanskaya Street we approach the very center of Vladivostok, the city's main square.

Here you will find the Memorial to the Fighters for the Soviet Power in the Far East from 1917-1922. This memorial by sculptor Alexei Teneta is considered one of the city’s main architectural treasures. Okeansky Prospect (Ocean Avenue), formerly known as Kitaiskaya ul. (Chinese Street) begins at this square. Zolotoy Rog Bay is very near so you can hear ship horns and the cries of seagulls.

We'll soon approach the sea, which is visible from almost any point in Vladivostok, but for now let's continue down Svetlanskaya. Passing by the Naval Officer’s Club at 48 Svetlanskaya Street, we'll turn right onto the cozy Admiraltyisky Square and then go down to Golden Horn Bay. Now we are on Korabelnaya Naberezhnaya (Ship Embankment).

Photo credit: Yulia Shandurenko
Warrant officer Nikolai Komarov and his crew, the founders of Vladivostok, disembarked here in the summer of 1860. Among the many monuments located in this part of the city are the Arc de Triomphe, built in honor of the arrival of Crown Prince Nikolai, the future Emperor Nicholas II, to Vladivostok; the submarine S-56, one of the most successful Soviet underwater vessels from World War II that has been turned into a monument; and the memorial ship Krasny Vympel (the Red Pennant), the headquarters of the Pacific Fleet. At the pier you will find large antisubmarine ships. Vladivostok remains the main base of Russia’s Pacific Fleet up until this day.

Look up: We're under the bridge across the Golden Horn Bay! It was built for the summit of APEC countries in 2012 and called the Zolotoi Most (Golden Bridge). The second bridge, also built for the APEC summit, is called Russkiy (Russian) and leads to Russkiy Island, where a new campus of the Far Eastern Federal University was opened. Both bridges quickly became symbols of Vladivostok and the pride of its residents. Unfortunately, you cannot walk on them.

Let's walk a bit further in the same direction. After going up a winding serpentinous road you will see the Gun Yard of the Museum of the Pacific Fleet.

Photo credit: Shutterstock/Legion-Media
The collection of guns on display in the museum’s courtyard is unique: Here are guns that were used in the defense of Port Arthur, which was besieged by the Japanese in 1904-1905, as well as the ship's guns that fired at the famous and tragic Russian naval battle of Tsushima that took place from May 14-15, 1905. There are also newer weapons and military equipment from the time of World War II.

A few more steps up and we are on Svetlanskaya Street again.

Source: Google Street view
On the opposite side of the street there is the house where Vladivostok’s most famous musician, Ilya Lagutenko, lived as a child. Lagutenko is considered something like a national hero in Vladivostok and everybody knows that he hasn’t forgotten his hometown. The musician holds the annual V-ROX (Vladivostok Rocks) international music festival, one of the largest in the Asia-Pacific region.

Let's walk in the opposite direction and go west on Svetlanskaya now. We're going back and making a circle.

Photo credit: Lori/Legion-Media
The American Eleanor Lord Prey lived here from 1894 to 1930. She wrote a letter to her loved ones every day. Her letters are something akin to a blog dedicated to Vladivostok. The life of an ordinary person is depicted here with the historical background and viewpoint of an American about Russia as she becomes more and more familiar in her new homeland.

Eleanor's descendants kept her letters in the United States until they made their way to Birgitta Ingemanson, a scholar of Slavic languages and literature. The Rubezh Publishing House in Vladivostok translated her archive into Russian and published a book in 2008, which became a bestseller in the Far East. In 2014 a monument to Pray was built in Vladivostok. Let's go down from Pochtovy pereulok back to Svetlanskaya and we'll see the monument:

And now let's continue on Svetlanskaya going west and head back to the point where we started our walk.

Photo credit: Lori/Legion-Media
The building to the right made of old brick is the Kunst and Albers Trading house. In 1884 two young German businessmen Gustav Kunst and Gustav Albers opened a department store. Some historians claim that it was the world's first department store and the second appeared in Chicago sometime later. During the Soviet times the building housed GUM, which translates as the State Department Store, the main shopping emporium of the city.

To the left, in front of GUM (38/40 Svetlanskaya Street) a branch of the State Hermitage, the world famous museum in St. Petersburg, will soon open. This will mark another good reason to visit. It’s time to go back to the main square.

Our walk is coming to an end. I hope that this short journey has helped you to understand why Vladivostok impresses most anyone that comes here. Now you can walk around the city on your own. Good luck and thank you for the company!