Monastery of Sts. Boris and Gleb in Torzhok: In memory of martyred princes 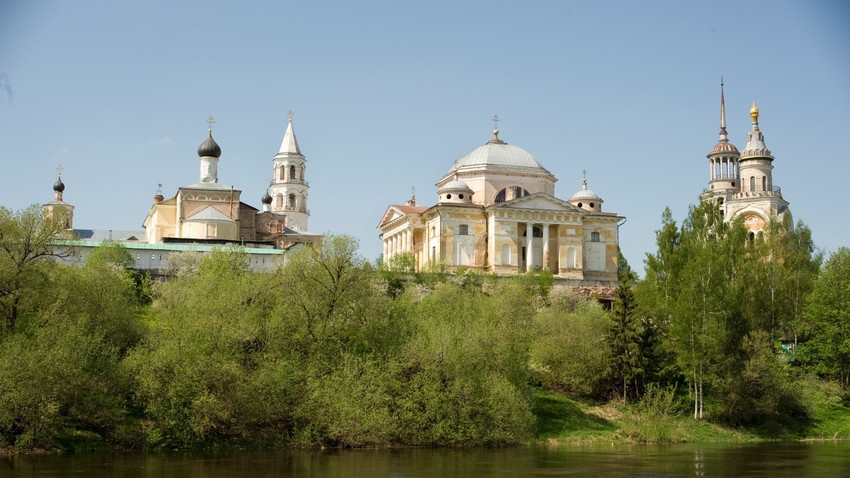 William Brumfield
Imposing neoclassical monument on the way from Moscow to Tver.

At the beginning of the 20th century the Russian chemist and photographer Sergei Prokudin-Gorsky devised a complex process for vivid, detailed color photography (see box text below). His vision of photography as a form of education and enlightenment was demonstrated with special clarity through his photographs of architectural monuments in the historic sites throughout the Russian heartland.

As part of his journeys in the upper Volga area in the summer of 1910, Prokudin-Gorsky made numerous photographs in the town of Torzhok, known for its ensembles of neoclassical architecture, A favorable location on the Tvertsa River just above its confluence with the Volga made Torzhok one of Russia’s oldest trading centers. The town’s name derives from the word torg, or "trade." 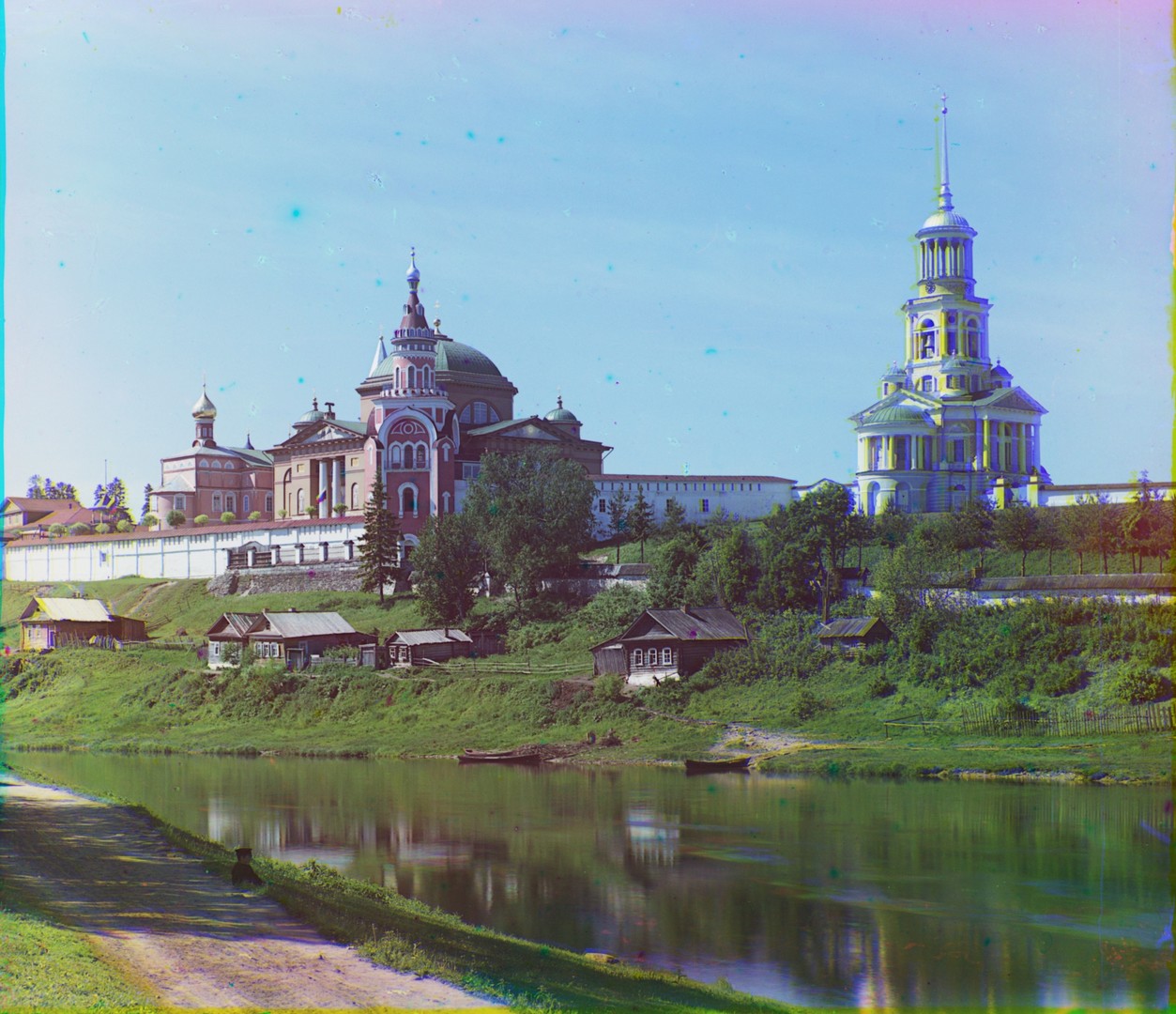 The first reference to the town occurred under the year 1138, but the settlement may have existed as early as the 10th century. As an outpost of the medieval commercial center of Veliky Novgorod, the town was frequently contested. The rise of Muscovite power in the 15th century brought an end to Novgorod's independence in the 1480s, and in 1478 Torzhok entered the domains of Moscow's ruler Ivan III (the Great).

The dominant feature in the landscape of historic Torzhok is the Monastery of Sts. Boris and Gleb, situated on the high right (west) bank of the Tvertsa River. It was the subject of several photographs by Prokudin-Gorsky. According to church sources originating in the 17th century, the monastery was founded in 1038 by the boyar Yefrem, who had served as equerry to Grand Prince Vladimir of Kiev. In 988, Vladimir accepted Orthodox Christianity as the religion of his domains. His death in 1015 unleashed a power struggle among his many sons, one of whom, Sviatopolk, is said to have ordered the murder of three of his brothers, including Boris and Gleb. Church accounts state that rather than take up arms against Sviatopolk, Boris and Gleb accepted death with Christ-like submission. Sviatopolk, known as the”Damned,” briefly ruled in Kiev but after a prolonged struggle was ousted by his brother Yaroslav (the “Wise) in 1019. Boris and Gleb were canonized in 1071 as the earliest martyrs of the Orthodox Church in Rus. 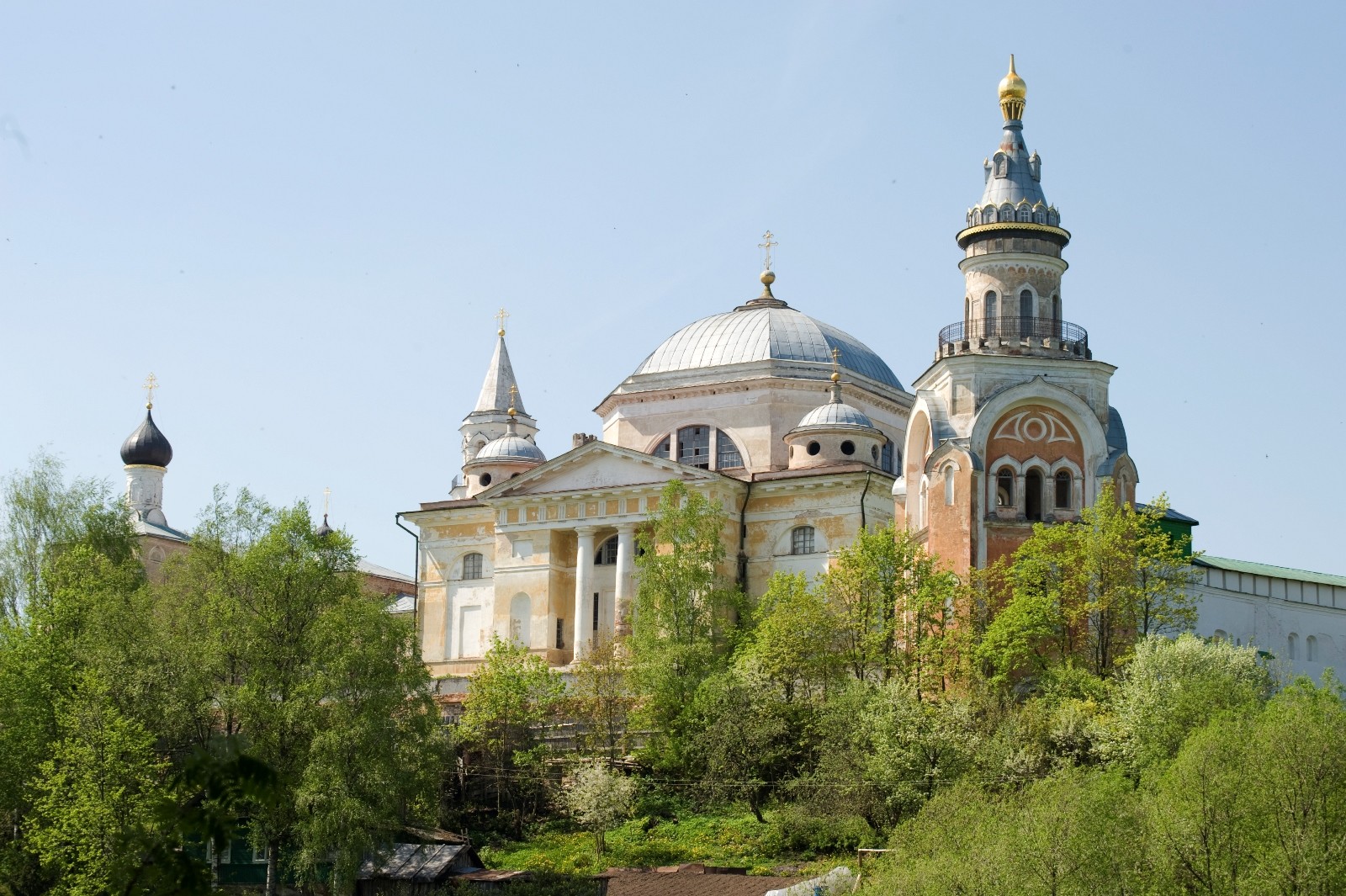 Inspired by Boris and Gleb, Yefrem made his way to the area of Torzhok and occupied himself with charitable work, eventually founding the monastic community where he lived until his death in 1053. In this endeavor he was assisted by his disciple Arkady Novotorzhsky.

Originally built of logs, the Monastery of Sts. Boris and Gleb was ransacked by Polish forces in 1617 during the Time of Troubles. By the late 17th century, the revived monastery had a few brick buildings, including the Church of the Presentation (recently restored). In the early 18th century, work began on the Church the Entry of Christ into Jerusalem, completed in 1717. 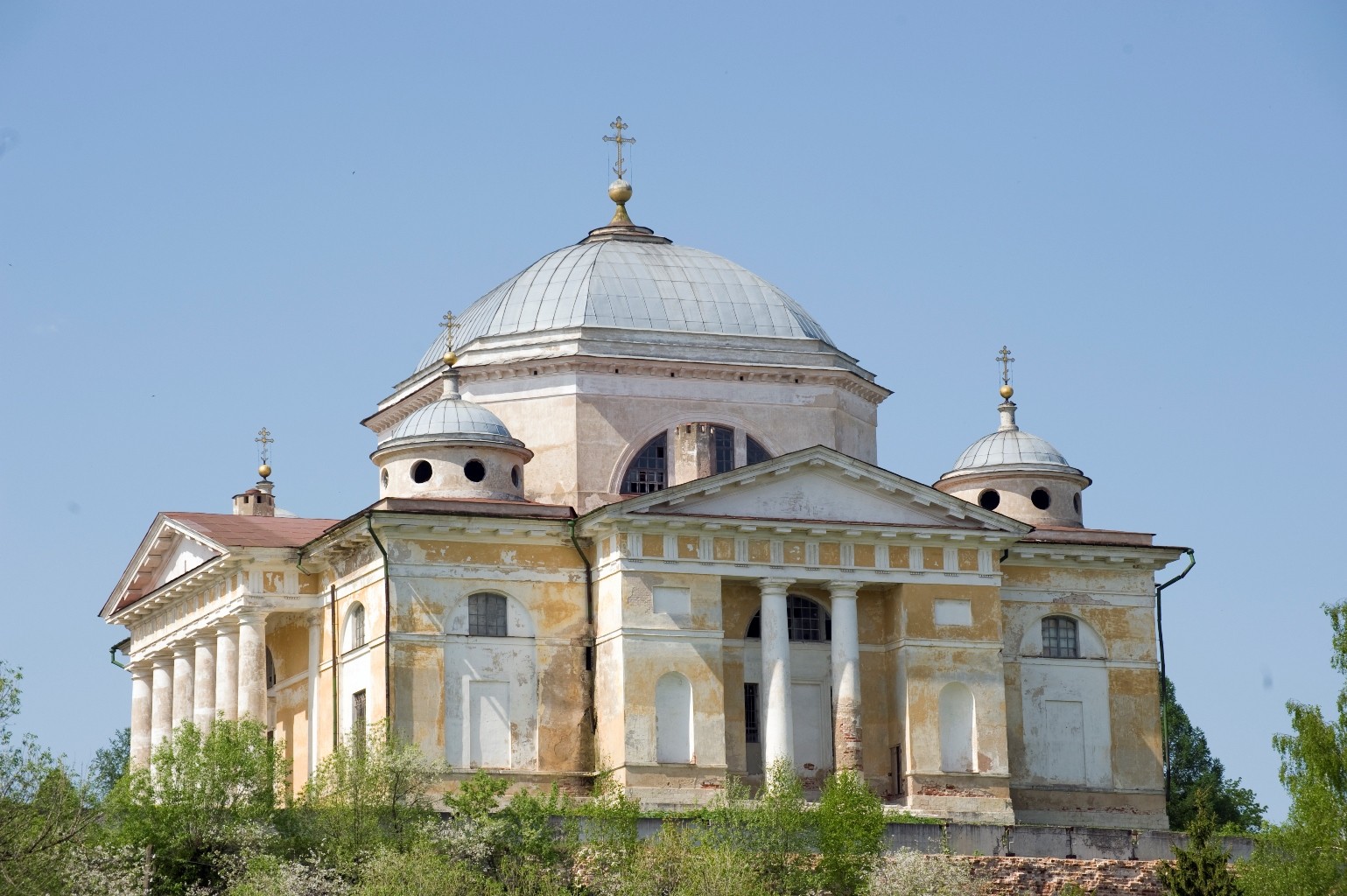 Increased support for the monastery occurred during the second half of the 18th century during the reign of Catherine the Great. To a certain degree, this increase was related to greater visibility from prominent visitors traveling between Moscow and St. Petersburg. Support from the imperial court also played a significant role.

In 1785, work began on rebuilding the monastery’s main church, the Cathedral of Sts. Boris and Gleb, with substantial support from Catherine. The design was entrusted to one of Catherine’s most prominent architects, Nikolai Lvov. Consecrated in 1796, the cathedral is considered a masterpiece of Russian neoclassicism. Lvov's great neoclassical churches closely follow the manner of the 16th-century Italian master Palladio, whom he idolized and whose work he saw in Italy. 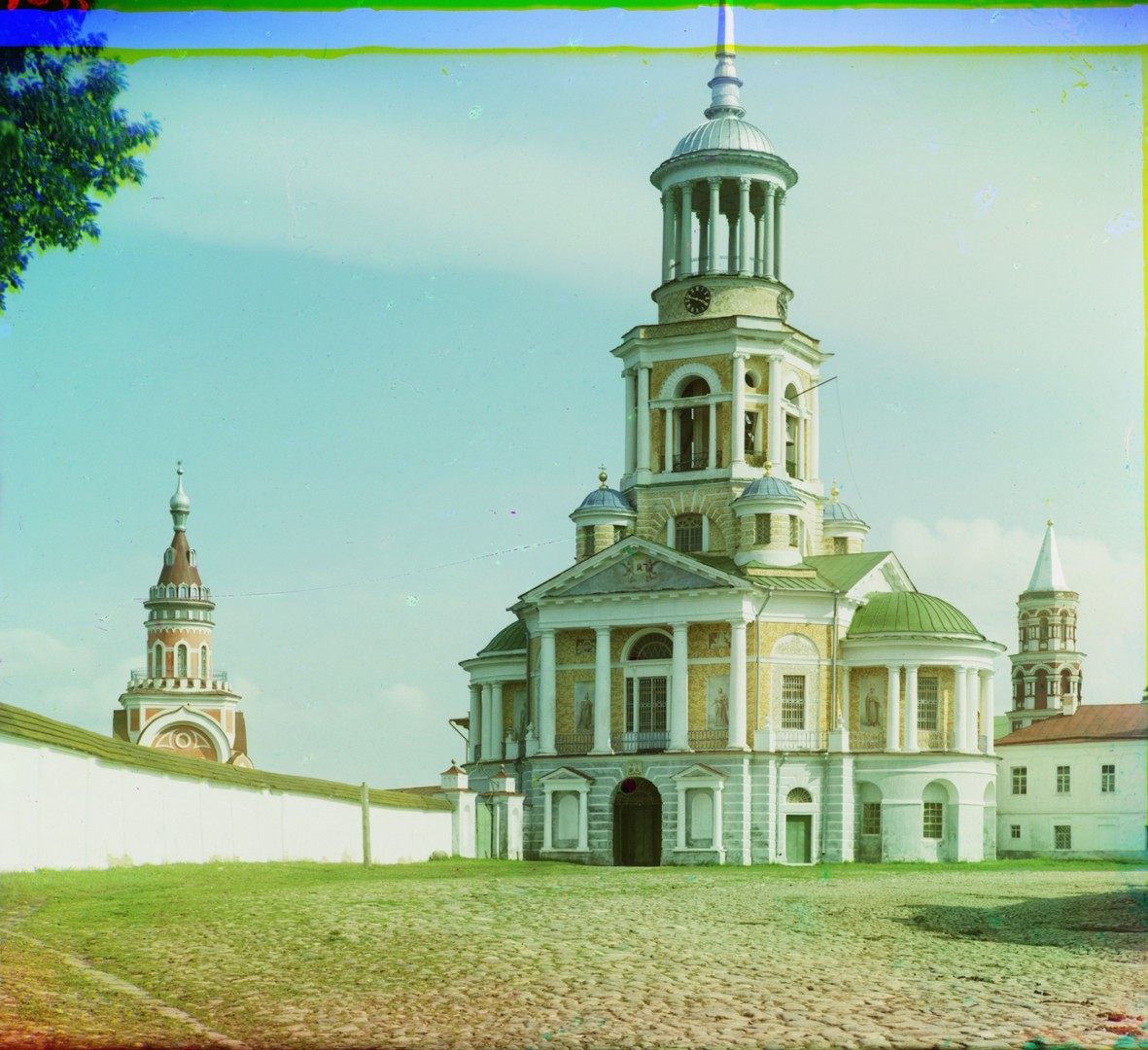 As seen in my photographs from 2010, the cathedral possesses a remarkable harmony of proportions. The hexastyle Tuscan portico on the north and south cathedral facades is balanced by Tuscan loggia at the east and west ends. The columns are of local limestone. The pediments above each façade provide a visual transition to the central dome, which rests on a square base with beveled corners and a large tripartite (thermal or “Palladian”) window. 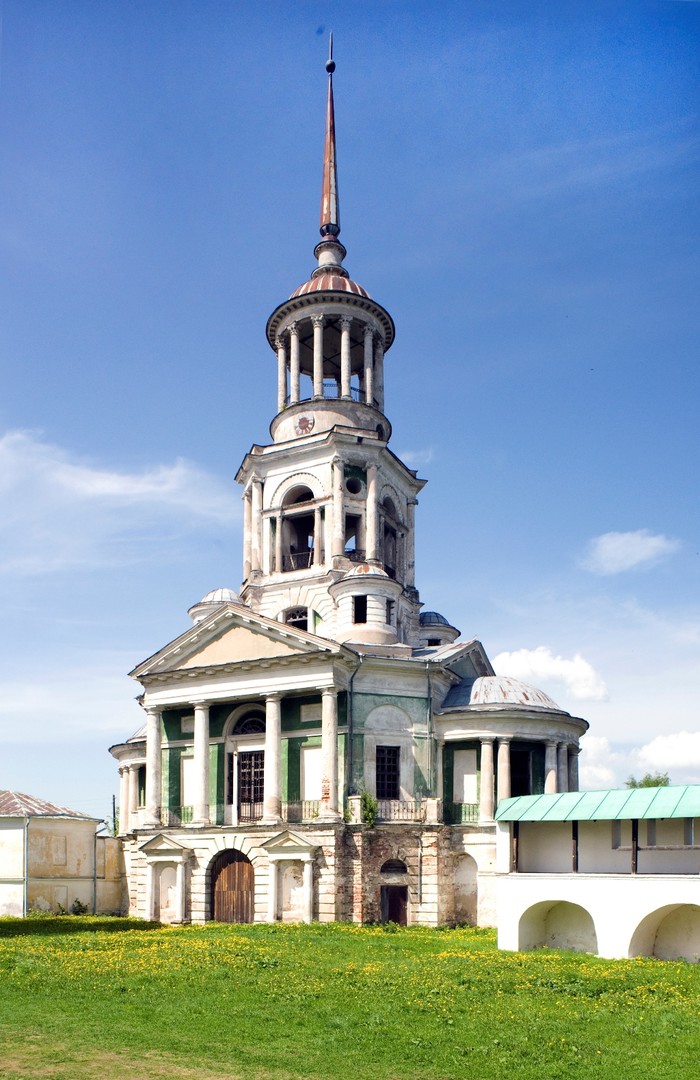 Bell tower & Church of the Miraculous Image of the Savior over Holy Gate, southeast view. May 14, 2010.

The cathedral interior was no less imposing, with neoclassical columns and piers rising to the central dome, all decorated in Renaissance forms. This interior — not photographed by Prokudin-Gorsky — was damaged by decades of neglect during the Soviet period, when the monastic territory was used for decades as a prison. Restoration began when the monastery was given to the local history museum. The monastery now belongs to the Orthodox Church, but the large sums needed for a restoration of the cathedral interior are difficult to obtain. 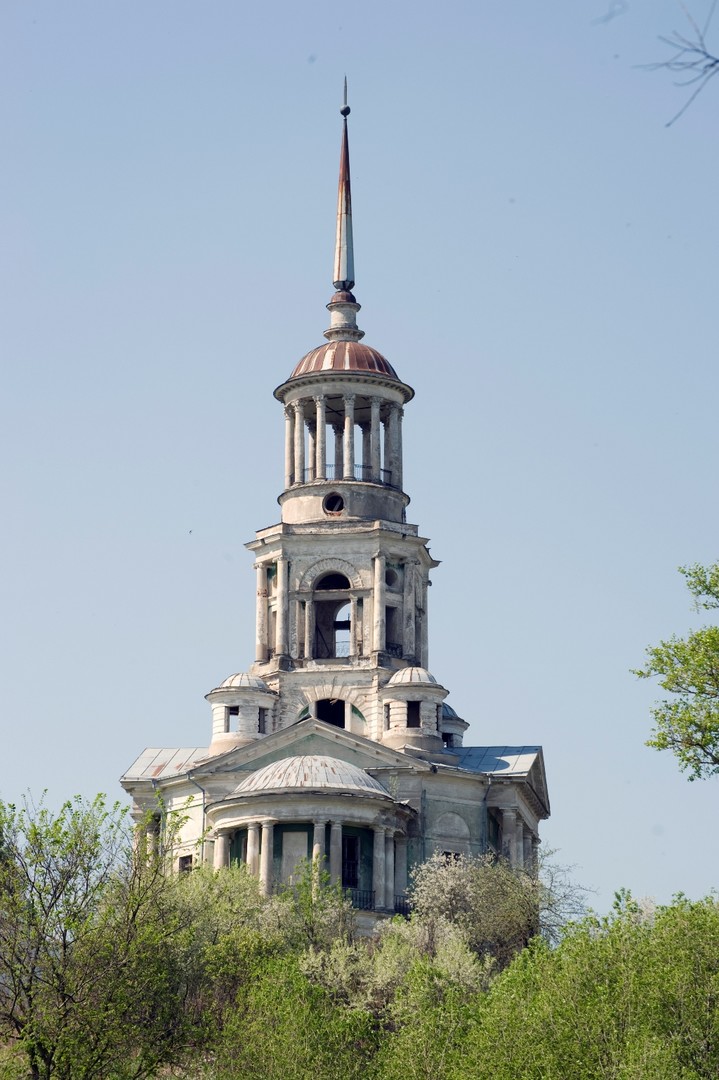 Bell tower & Church of the Miraculous Image of the Savior over Holy Gate, east view from Tvertsa River. May 14, 2010.

In the 19th century, the monastery's wealth was reflected in the construction of the Church of the Miraculous Icon of the Savior over Holy Gate (the main monastery entrance). Built in 1804-11, the neoclassical church is a model of classical symmetry and is considered partly the design of Nikolai Lvov, although its construction was supervised by Yakov Ananin. Carefully photographed by Prokudin-Gorsky, the church was crowned with a high bell tower that is one of Torzhok's most visible landmarks. Prokudin-Gorsky took an additional photograph of the church’s lower tier, with its unusual marbling pattern on the exterior stucco (since lost, as my photographs demonstrate). 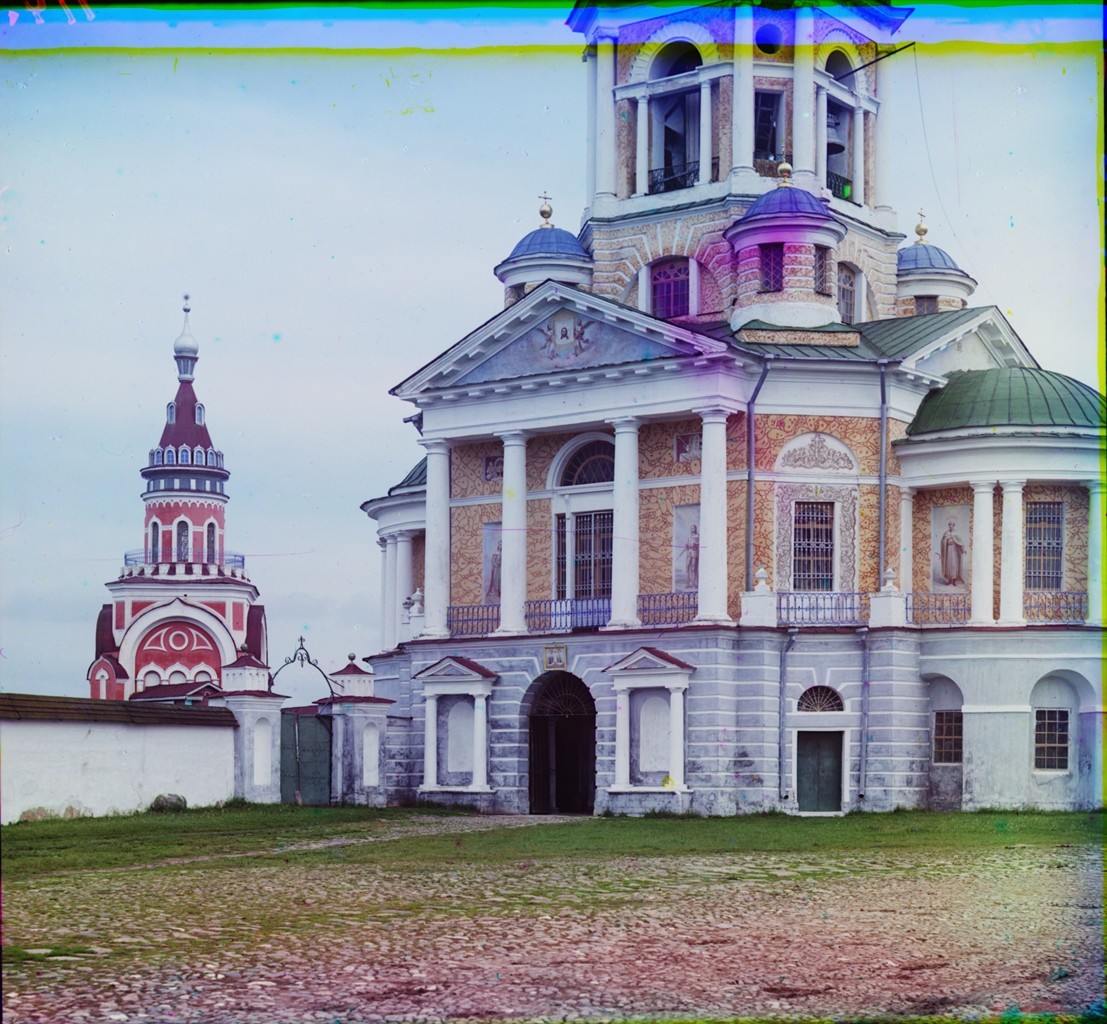 A final decorative accent is provided by the colorful “Candle,” or Library Tower, located at the northeast corner of the monastery walls. The tower was erected in an eclectic medieval style during the 1880s, when the monastery walls were rebuilt by local architect Stepan Grebenshchikov. The upper part of the tower was brightly restored in the 1980s. Despite the unenviable fate of this ancient monastery during the 20th century, a comparison of Prokudin-Gorsky’s photographs from 1910 with mine from 1996 and 2010 shows that at least the exterior of this grand ensemble has survived. 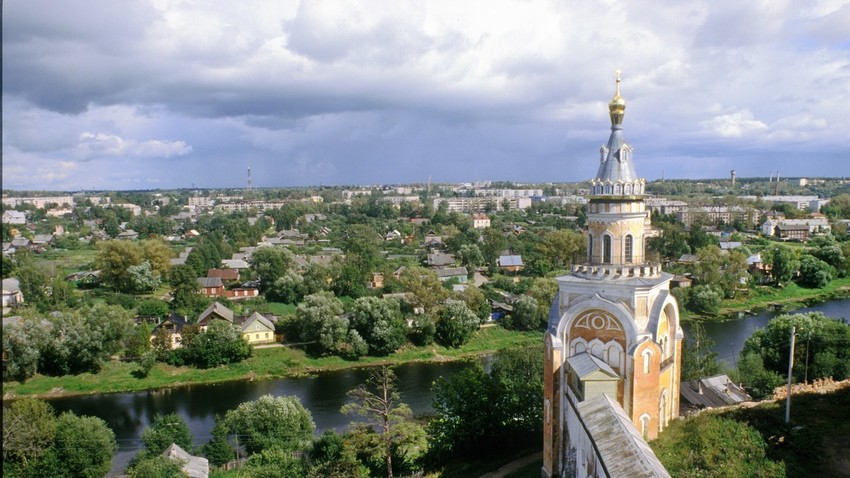 In the early 20th century the Russian photographer Sergei Prokudin-Gorsky devised a complex process for color photography. Between 1903 and 1916 he traveled through the Russian Empire and took over 2,000 photographs with the process, which involved three exposures on a glass plate. In August 1918, he left Russia with a large part of his collection of glass negatives and ultimately resettled in France. After his death in Paris in 1944, his heirs sold his collection to the Library of Congress. In the early 21st century the Library digitized the Prokudin-Gorsky Collection and made it freely available to the global public. A number of Russian websites now have versions of the collection. In 1986 the architectural historian and photographer William Brumfield organized the first exhibit of Prokudin-Gorsky photographs at the Library of Congress. Over a period of work in Russia beginning in 1970, Brumfield has photographed most of the sites visited by Prokudin-Gorsky. This series of articles will juxtapose Prokudin-Gorsky’s views of architectural monuments with photographs taken by Brumfield decades later.

The Medieval Fortress of Belozersk: From Prokudin-Gorsky to the present

Solovetsky Transfiguration Monastery: From Prokudin-Gorsky to the present