The Trinity-Ipatiev Monastery in Kostroma: Refuge for the Romanovs 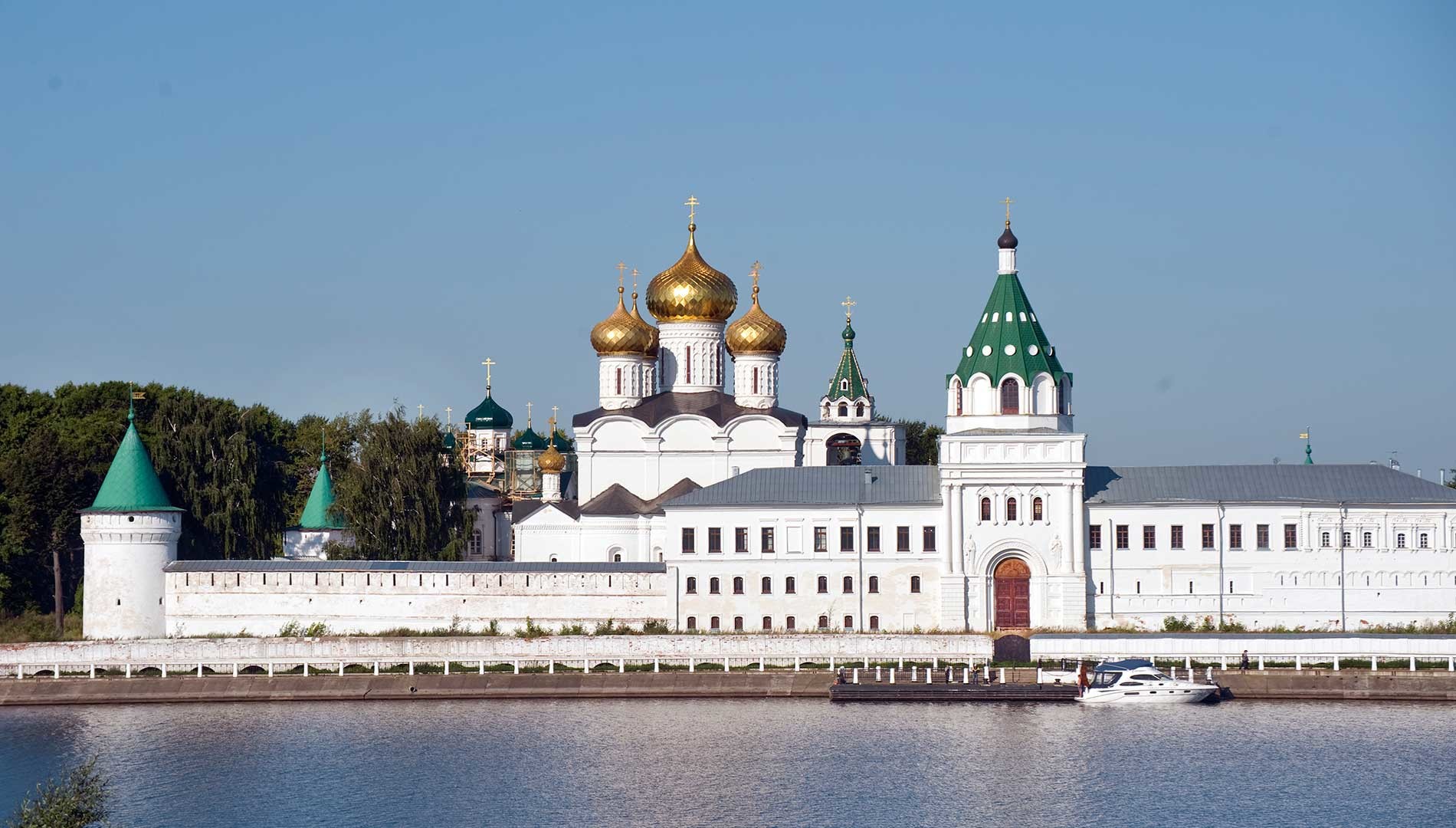 At the beginning of the 20th century, the Russian chemist and photographer Sergei Prokudin-Gorsky devised a complex process for vivid, detailed color photography (see box text below). His vision of photography as a form of education and enlightenment was demonstrated with special clarity through his photographs of architectural monuments in the historic sites throughout the Russian heartland.

One of these sites was Kostroma. Although smaller than its neighbor Yaroslavl, Kostroma rivaled the better-known town for the beauty of its churches and the fame of its Trinity-Ipatiev Monastery, a center of medieval Russian chronicle writing. Prokudin-Gorsky made two trips to Kostroma, the first in 1910 and again in 1911 for work in the monastery archives. 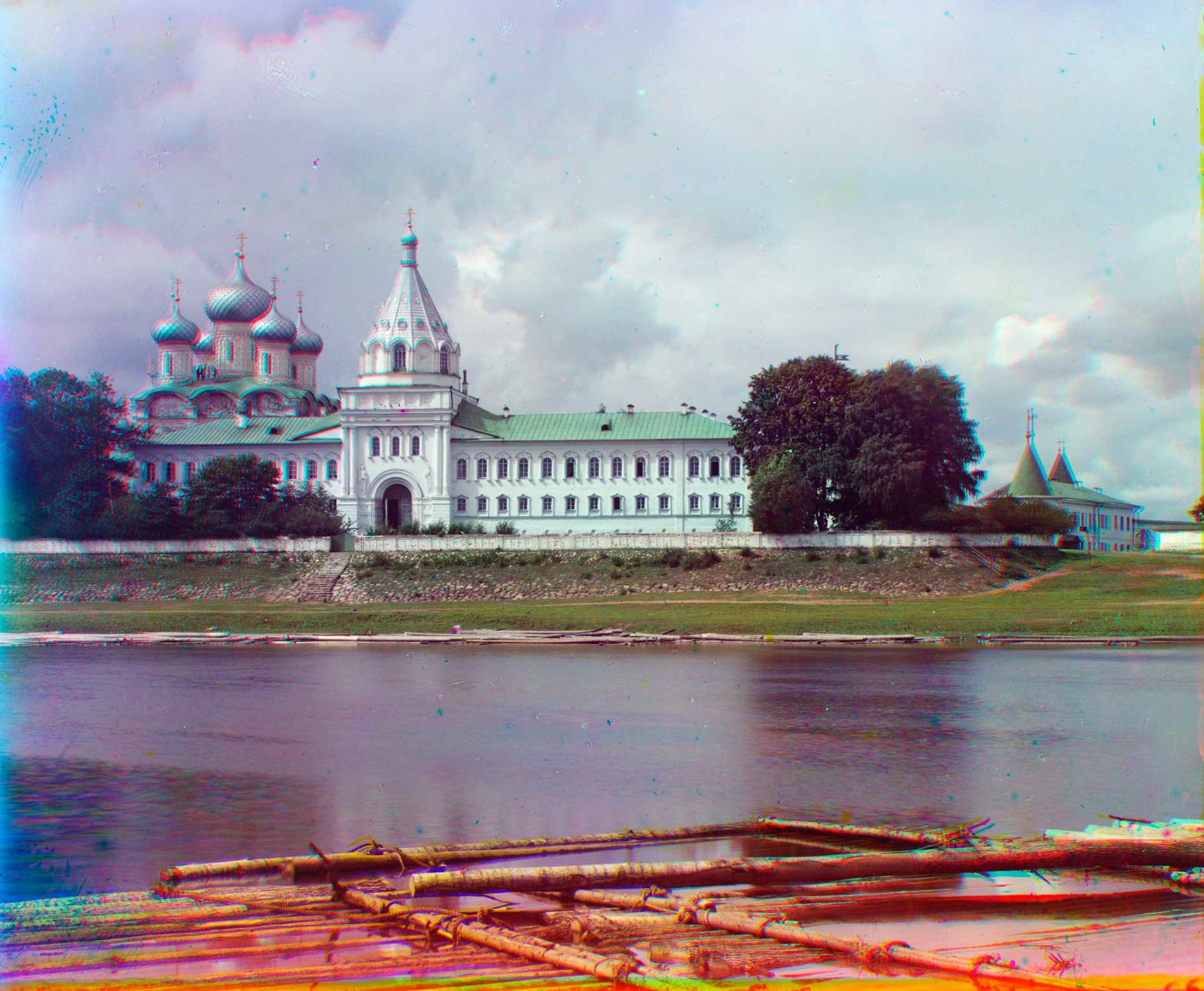 By the time of Prokudin-Gorsky’s visit, the Trinity-Ipatiev Monastery was one of the most renowned monasteries in Russia. During the 16th century, the monastery’s main benefactors were Dmitry Godunov and his nephew, future tsar Boris Godunov (1552-1605). The considered the monastery to have been founded by their Tatar ancestor Murza Chet, who in 1330 left the Golden Horde for the court of Muscovite Prince Ivan Kalita (1288-1341). 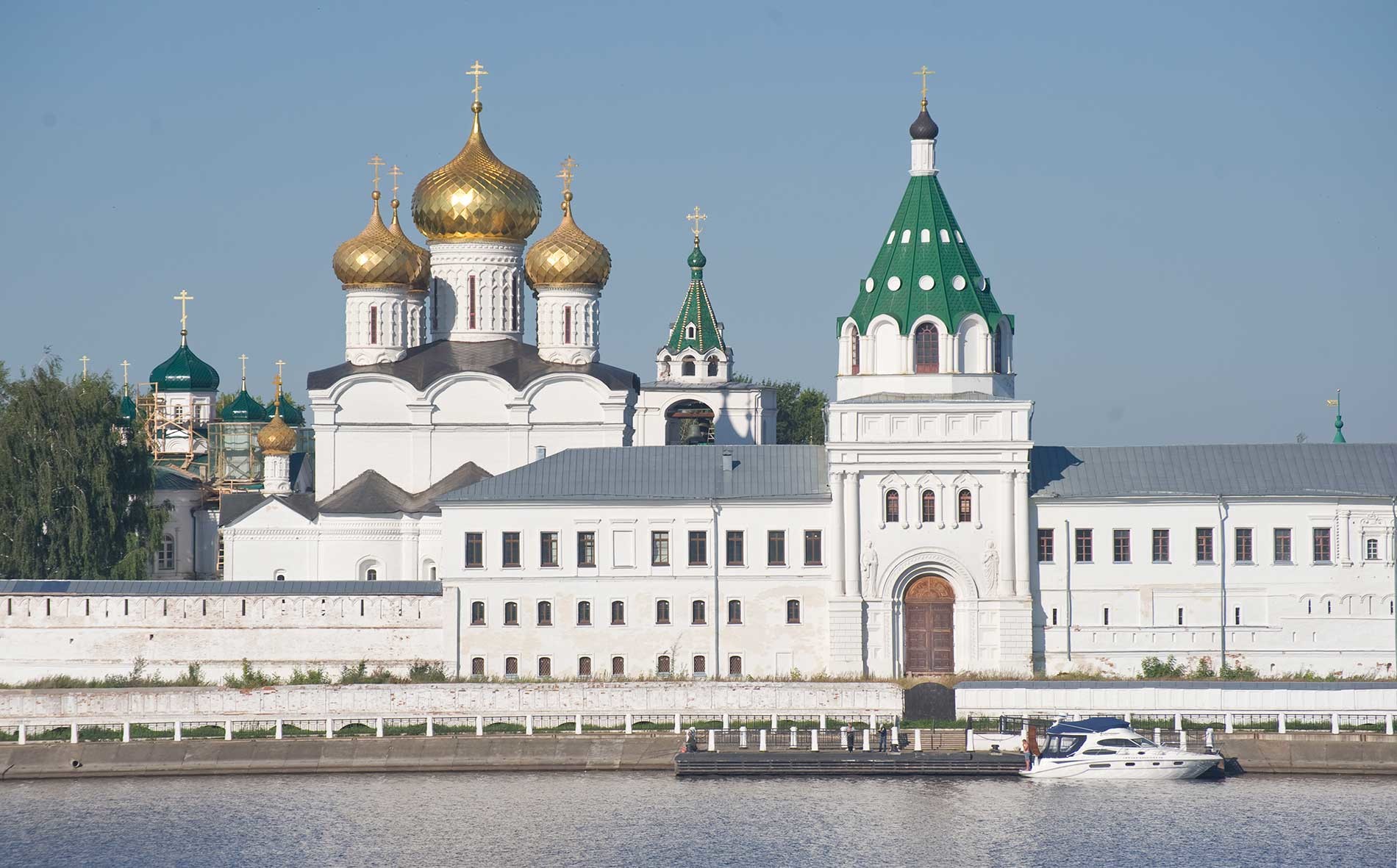 Once in Moscow, he accepted Christianity and the Christian name Zakhary (Zacharius). As a sign of favor, Ivan Kalita gave him extensive lands near Kostroma. According to this version, Zakhary/Chet was an illness by a miraculous vision of the Virgin Mary flanked by St. Philip and St. Hypatius, the early 4th-century bishop of the diocese of Gangra in Asia Minor and a strong supporter of the doctrine of the Trinity at the First Ecumenical Council (325). In gratitude for his vision, Zakhary decided to support the establishment of a monastery dedicated to the Holy Trinity and St. Hypatius (Ipaty in Russian).

According to another version, the monastery was founded in 1275 by Prince Vasily Yaroslavich (1236 ?-1276), brother of Grand Prince Alexander Nevsky (1220 ?-63). In this it is possible that with the decline of the Kostroma Principality after Vasily’s death, the small monastery, bereft of support, was revived with the largess of a new patron.

Caught up in historic rivalries

By of fate, the Trinity-Ipatiev Monastery and closely related to Boris Godunov’s nemesis, the Romanov family. After the death of Ivan the Terrible’s son Fyodor in 1598, Russia’s first dynasty, the Rurikids, was extinguished. Boris Godunov, an able administrator who had guided affairs of state, achieved the throne and intended to create a new dynasty. However, he had alienated many in his rise to power, and he was aware that much of the elite favored the Romanovs, who were related to Ivan the Terrible through his first marriage to the widely admired Anastasia Romanovna Zakharina-Yureva (1530-60). 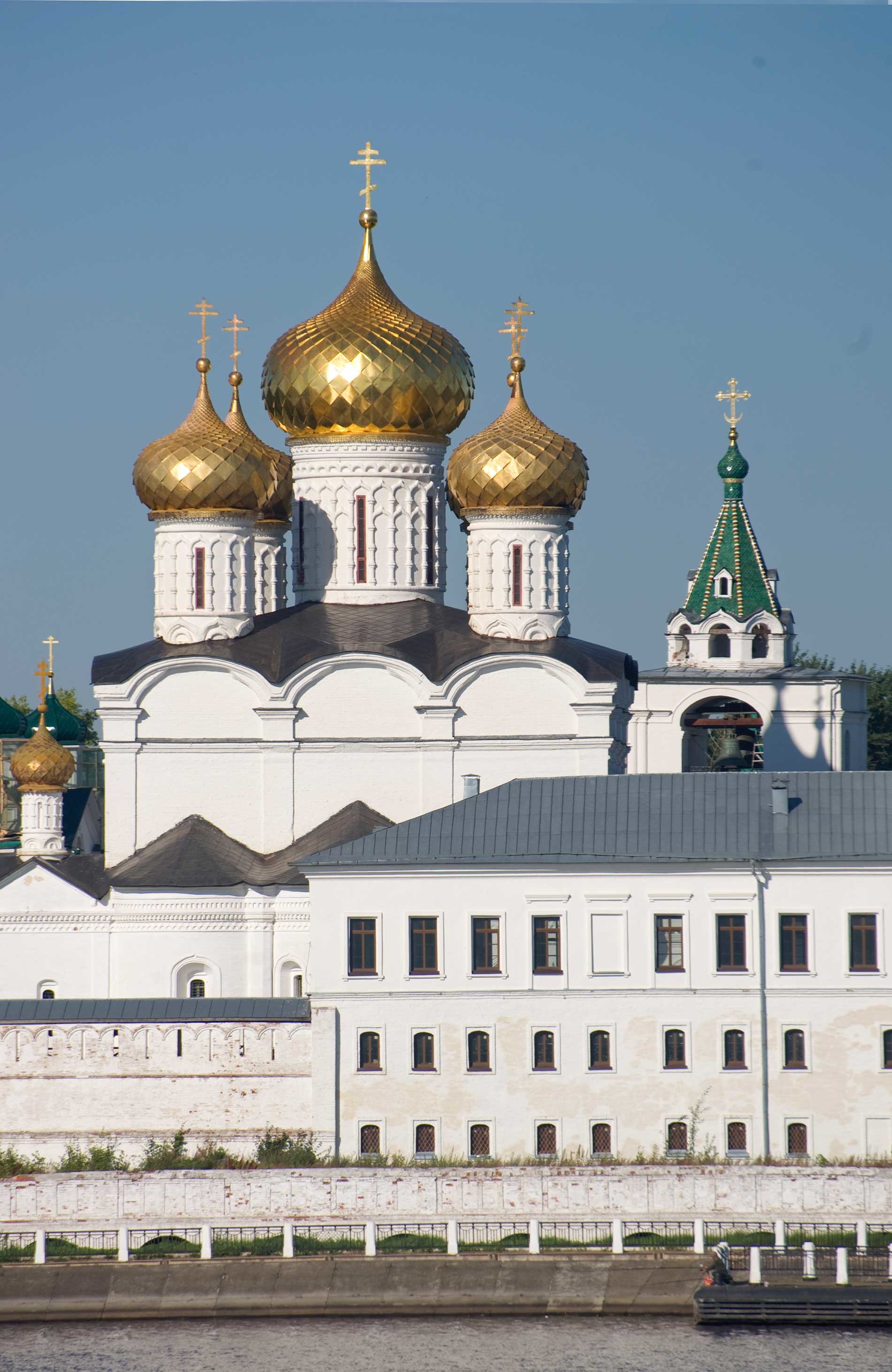 In his vendetta against the Romanovs, in 1600 Godunov sent Mikhail Nikitich Romanov to an agonizing death in Nyrob. That same year, Godunov exiled Mikhail’s’ brother, Fyodor Nikitich (1553-1633), and compelled Fyodor and his wife, Ksenia, to take monastic vows as Filaret and Marfa. Godunov’s death in 1605 led to the killing of his family by an enraged mob and ushered in a devastating period of social disorder, civil war and foreign intervention known as the Time of Troubles.

Each year brought new, competing claimants to the Muscovite throne. In 1610, Filaret, then a prelate in the Orthodox Church, was imprisoned by the Polish King Sigismund III for refusing to sign a treaty legitimizing the accession of his son Władysław IV to the Muscovite throne. (Filaret would return to Moscow only in 1619, after the Truce of Deulino.) 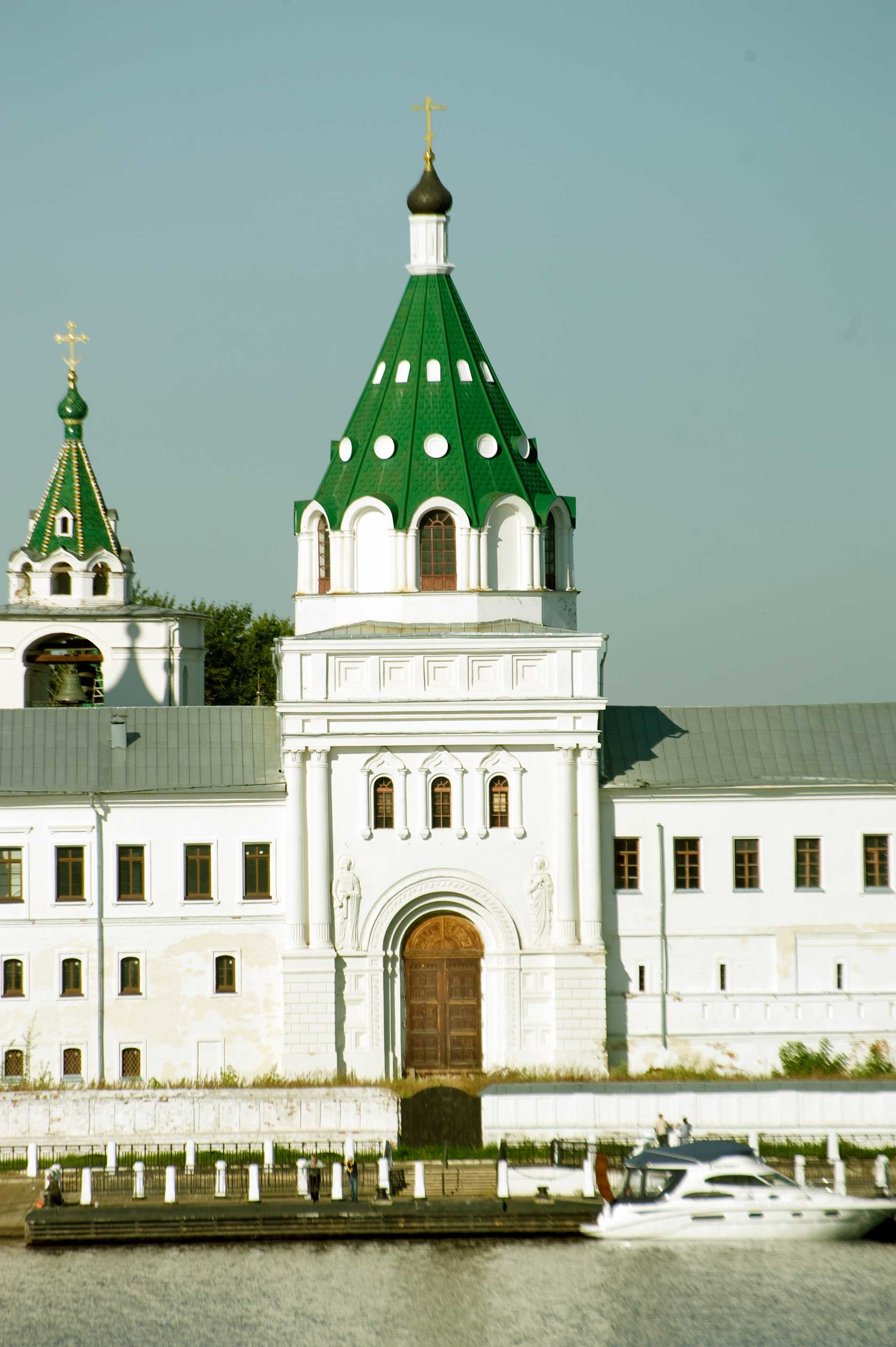 With the ardent support of the Orthodox Church, Moscow and its Kremlin were ultimately recaptured from Polish detachments in late October 1612. Among those freed from the Kremlin was the small Romanov family, including Filaret’s wife (now known by her monastic name Marfa) and their 16-year-old son Mikhail.

Safe haven for the Romanovs

Russia still remained in the throes of fighting and chaos, as armed bands of troops and marauders pillaged the country. In late 1612 Marfa and Mikhail — in effect fugitives in their own land — retreated to a Romanov estate near Kostroma and soon thereafter sought more secure shelter behind the walls of the Ipatiev Monastery. 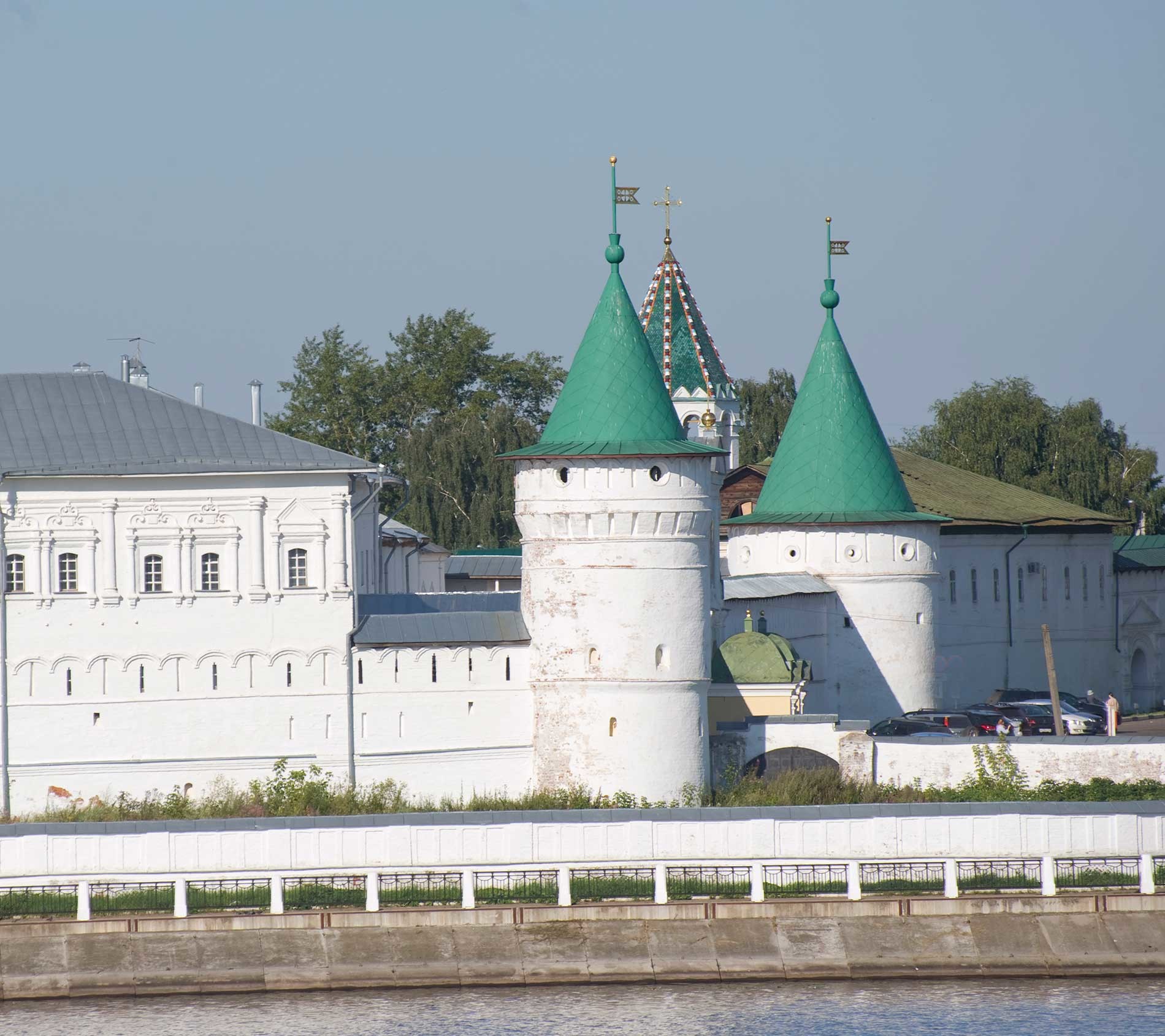 On Feb. 21, 1613 (March 3 by the Gregorian calendar), Mikhail Romanov was elected to the tsar's throne by a national assembly (Zemsky ) in Moscow, although his whereabouts were still uncertain. On March 14 (24), a delegation from the assembly arrived at the monastery to persuade Mikhail, advised by his reluctant and apprehensive mother, to accept the crown. The coronation finally occurred in battle-scarred Moscow on July 22, thus laying the foundation for the Romanov dynasty.

As stability slowly returned under Romanov rule in the 17th century, the Ipatiev Monastery received substantial donations acknowledging its role in the dynasty’s accession. Numerous buildings were added in the 17th through the 19th centuries.  Already acquainted with the imperial family, Prokudin-Gorsky was drawn to the monastery in advance of the Romanov dynasty tercentenary in 1913. During his second visit, he photographed several relics associated with the solemn events of March 1613. 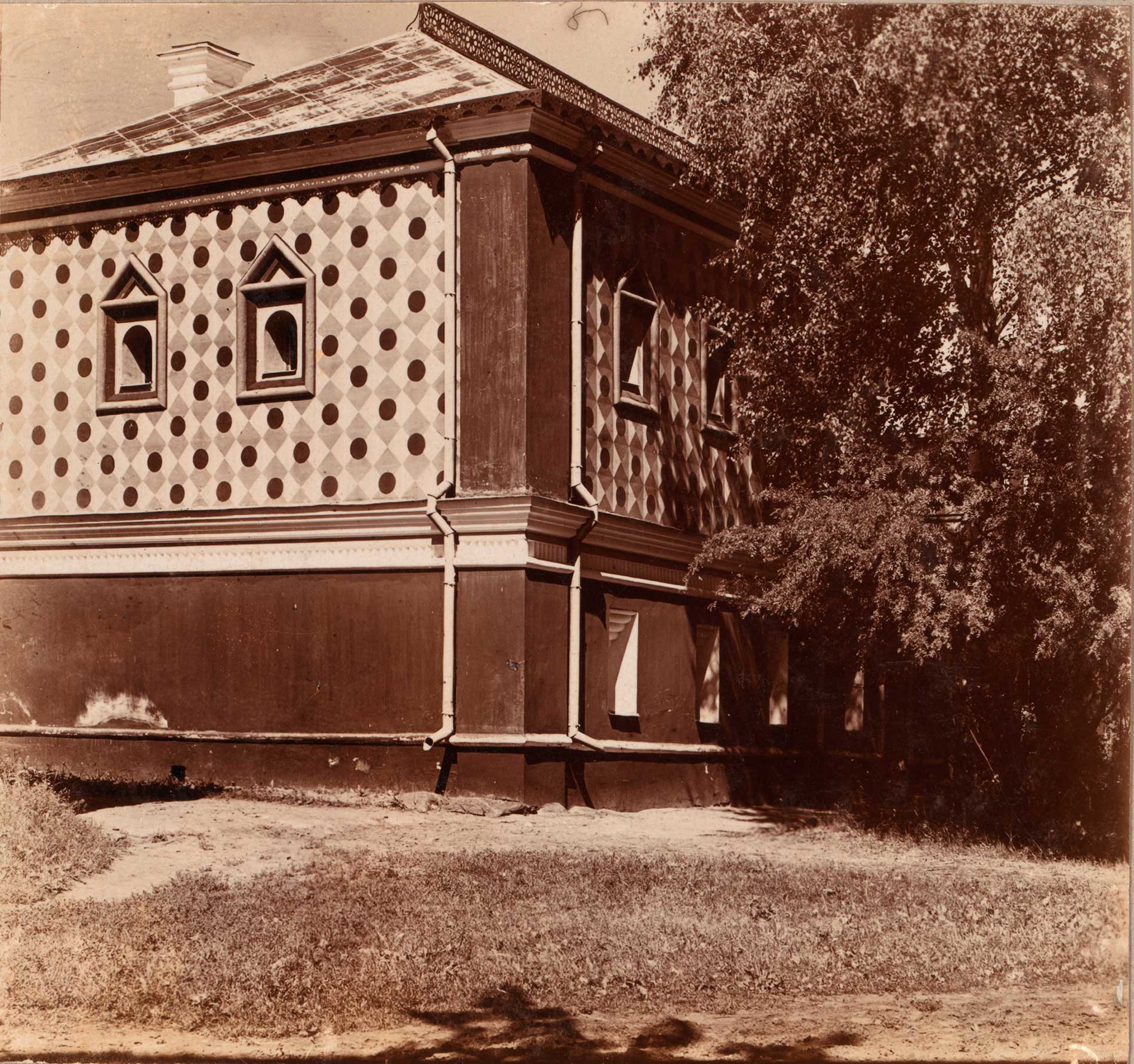 Prokudin-Gorsky’s photographs of the monastery include the east wall viewed across the Kostroma River near its confluence with the Volga. My photographs from a similar perspective show the same monuments over a century later. On the left is the upper part of the Trinity Cathedral, the monastery’s central shrine, rebuilt in 1650-52 and crowned with five gilded domes. 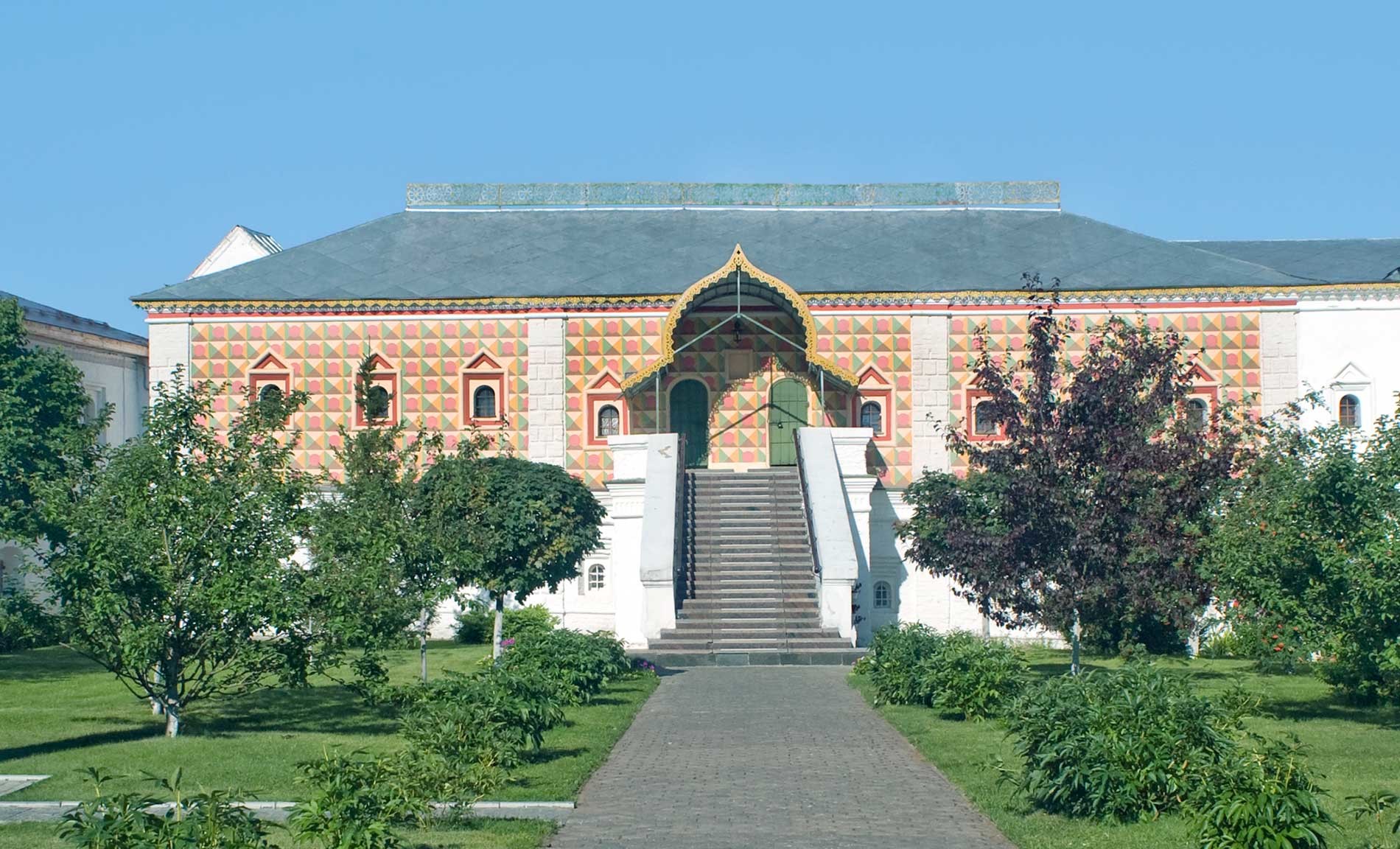 The center of this view is occupied by the large Archbishop’s Cloisters, part of which dates to the 17th century. An expansion of the building was completed in the late 1850s over the monastery’s east gate. Designed by Konstantin Ton, the leading church architect of the era, the building culminates in a 12-sided “tent” tower over the Church of Sts. Chrysanthus and Daria, 3rd-century Roman martyrs. On the right is the Powder Tower in the wall’s northeast corner. My photographs include a detailed view of the north wall towers.

During the 19th century, the memorialization of the monastery’s connections to the Romanovs assumed a national character. One of the main components of the commemoration was the renovation of the space where Mikhail Romanov and his mother stayed. This project was initiated after a visit by Emperor Alexander II in 1858, who commanded that the modest structure recreated in a 17th-century style.

The substantial reconstruction of what became known as the Boyar Romanov Chambers was undertaken by the architect Fyodor (Friedrich) Richter, who was at that time involved in a similar Romanov Chambers project near the Moscow Kremlin. Although the Library of Congress collection lacks Prokudin-Gorsky’s original glass negative, his sepia contact print shows a good detail of the structure. My recent photograph shows the results of a restoration after the monastery’s return to the Orthodox Church. is now part of the monastery’s impressive museum. 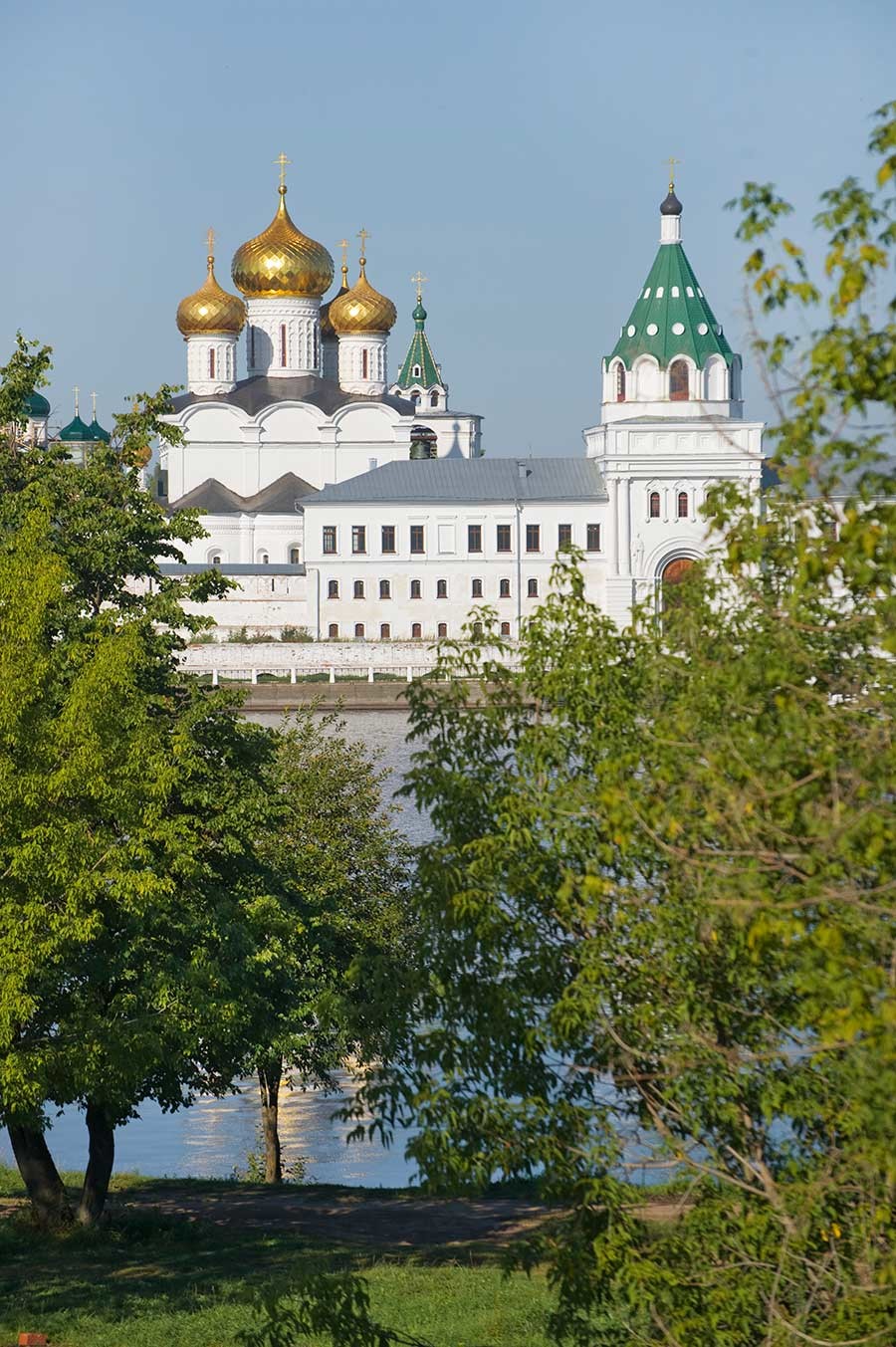 In the early 20th century the Russian photographer Sergei Prokudin-Gorsky devised a complex process for color photography. Between 1903 and 1916 he traveled through the Russian Empire and took over 2,000 photographs the process, which involved three exposures on a glass plate. In August 1918, he left Russia and ultimately resettled in France with a large part of his collection of glass negatives. After his death in Paris in 1944, his heirs sold the collection to the Library of Congress. In the early 21st century the Library digitized the Prokudin-Gorsky Collection and made it freely available to the global public. A number of Russian websites now have versions of the collection. In 1986 the architectural historian and photographer William Brumfield organized the first exhibit of Prokudin-Gorsky photographs at the Library of Congress. Over a period of work in Russia beginning in 1970, Brumfield has photographed most of the sites visited by Prokudin-Gorsky. This series of articles will juxtapose Prokudin-Gorsky’s views of architectural monuments with photographs taken by Brumfield decades later.