Travel
William Brumfield
The complex shows its best side on an idyllic summer day. 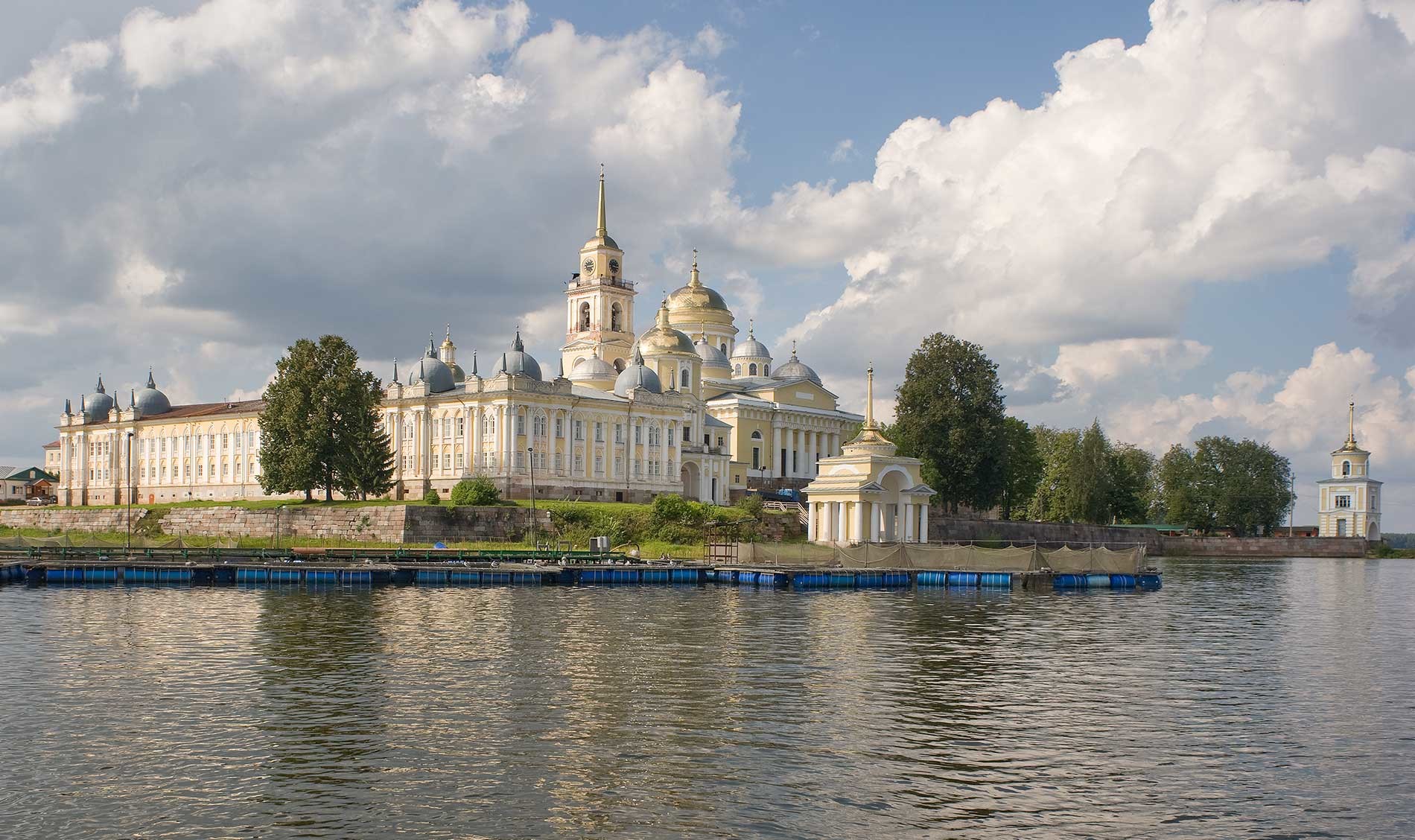 At the beginning of the 20th century, Russian chemist and photographer Sergei Prokudin-Gorsky developed a complex process for vivid color photography (see box text below). His vision of photography as a form of education and enlightenment was demonstrated with special clarity through his images of architectural monuments in the historic sites throughout the Russian heartland.

In 1908, Prokudin-Gorsky arranged screen showings of his color images to various groups in St. Petersburg, including members of the imperial court and the State Duma. After a meeting with Emperor Nicholas II in May 1909, Prokudin-Gorsky’s project received official support from the Ministry of Transportation, which facilitated his photography along Russia’s rail and waterways. 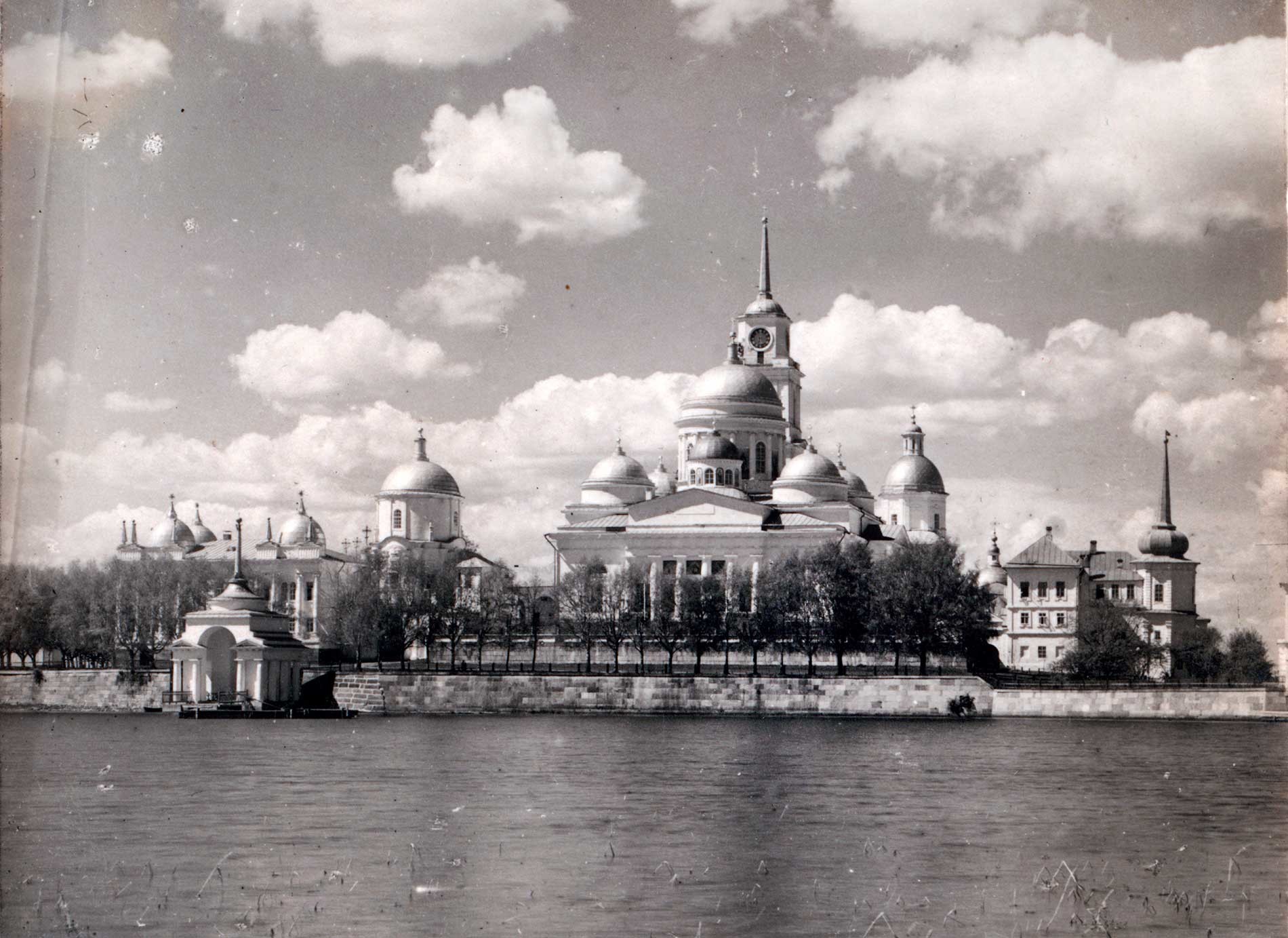 Among the most breathtaking of Prokudin-Gorsky’s striking photographs are those he took in the summer of 1910 of the St. Nilus Stolobensky Monastery in the Tver Region. Located on a small island in Lake Seliger, the monastery possesses a special lyrical appeal in the midsummer, when the shores of Stolobny Island are fringed with reeds and water lilies. My photographic work there dates from August 2016, more than a century after Prokudin-Gorsky’s visit.

The guiding spirit of Nilova Pustyn (as it is often called in Russian) was the monk Nilus, born in the Novgorod region in the late 15th century. Orphaned at an early age, he entered the Monastery near Pskov and took the name of St. Nilus of Sinai, a 5th-century Byzantine monastic theologian. In 1515, with his abbot’s blessing, Nilus went into the deep forest for a more rigorous form of monastic isolation. 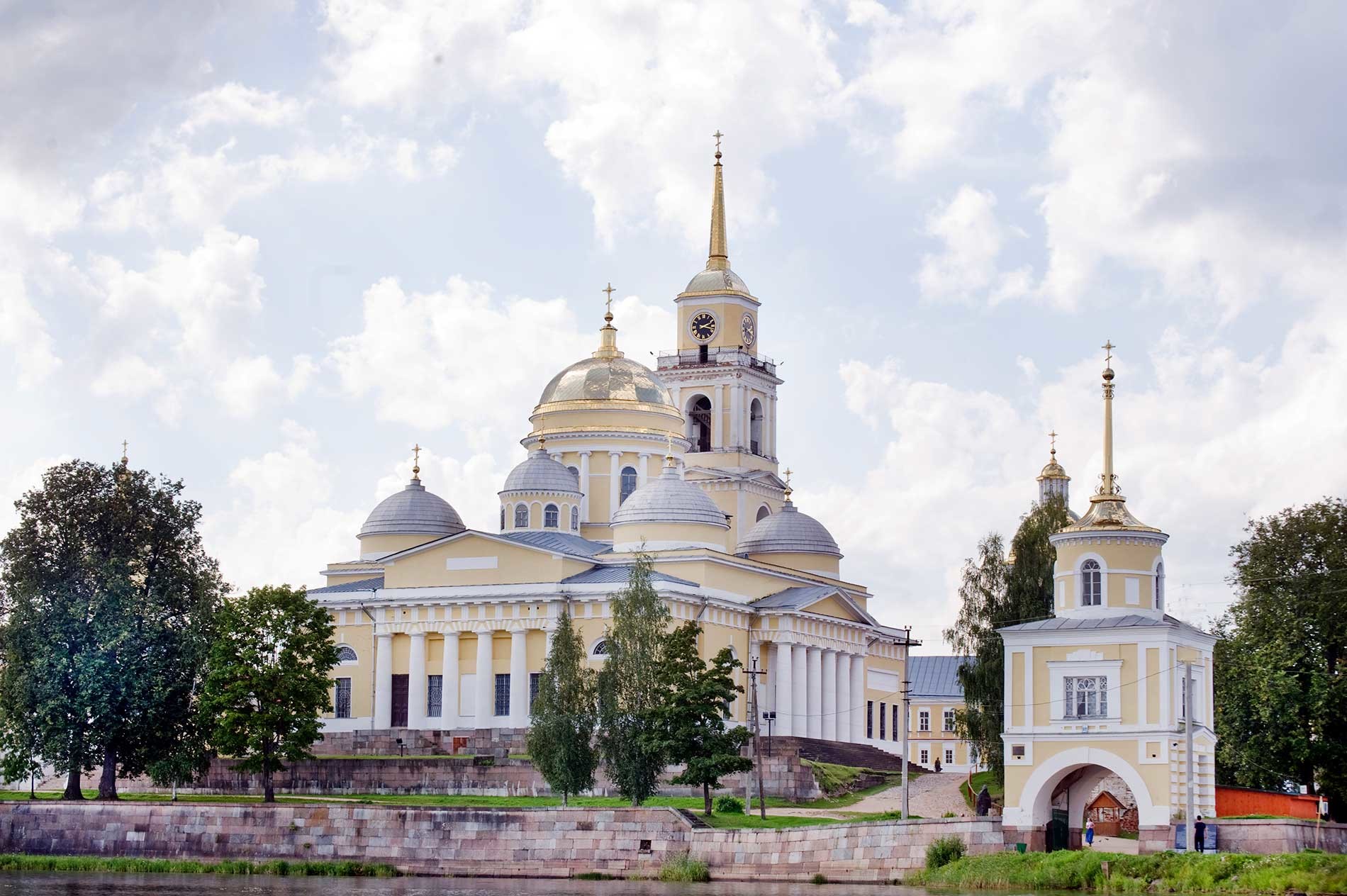 As word of Nilus’ saintly reputation spread, he was visited by those who sought his blessing and prayers. After 13 years in the Nilus made his way in 1528 to an uninhabited island nestled in one of the many inlets of Lake Seliger. After a life of prayer and self-abnegation, he passed away in December 1555. Locally venerated after his death, he was acknowledged as a Russian Orthodox saint in 1756.

Following St. Nilus’s death, a group of monks gathered on the island under the guidance of the monk Herman from the nearby St. Nicholas-Rozhkovsky Monastery. Herman and others erected a log church dedicated to the Epiphany in 1591-94, and shortly thereafter Patriarch Job gave his blessing to the Nilova Pustyn community.

Over the next 150 years, the monastery endured many but survived with the support of the Muscovite court. The accumulated wealth reflected in its architecture is superbly reflected in Prokudin-Gorsky’s photographs, taken primarily to the east. 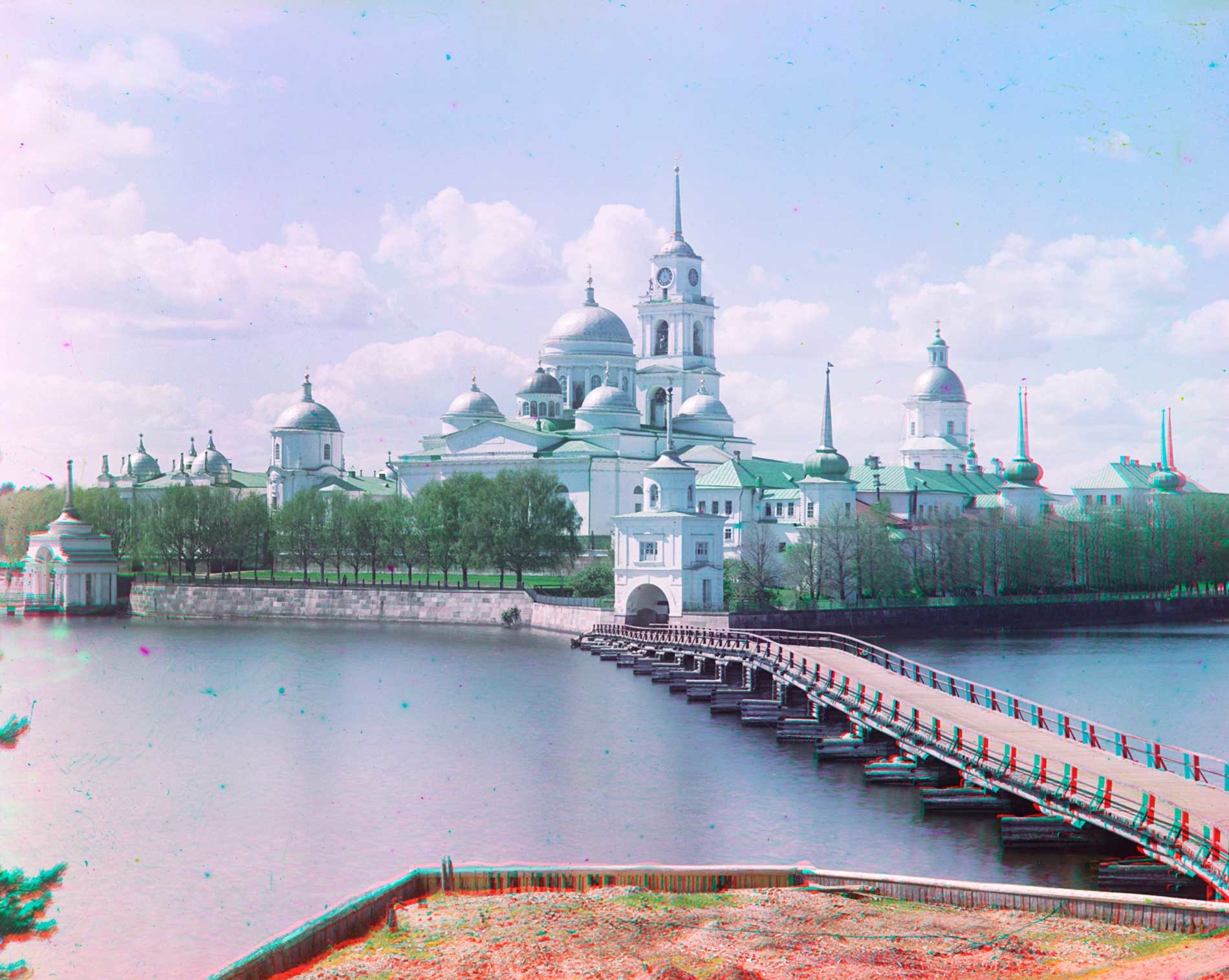 The oldest surviving church within the monastery was built in 1699-1700 next to the monastery infirmary and dedicated to St. Nilus. Re-consecrated in 1723 as the Church of All Saints, it was modified during century, when its traditional five cupolas were reduced to one. The church was severely damaged during the Soviet period, and it is now under restoration.

Most of the existing churches were rebuilt over several decades beginning in the middle of the 18th century. Among the better preserved is the Church of St. Nilus Stolobensky, a Baroque structure built in 1751-1755 over the East Gate. 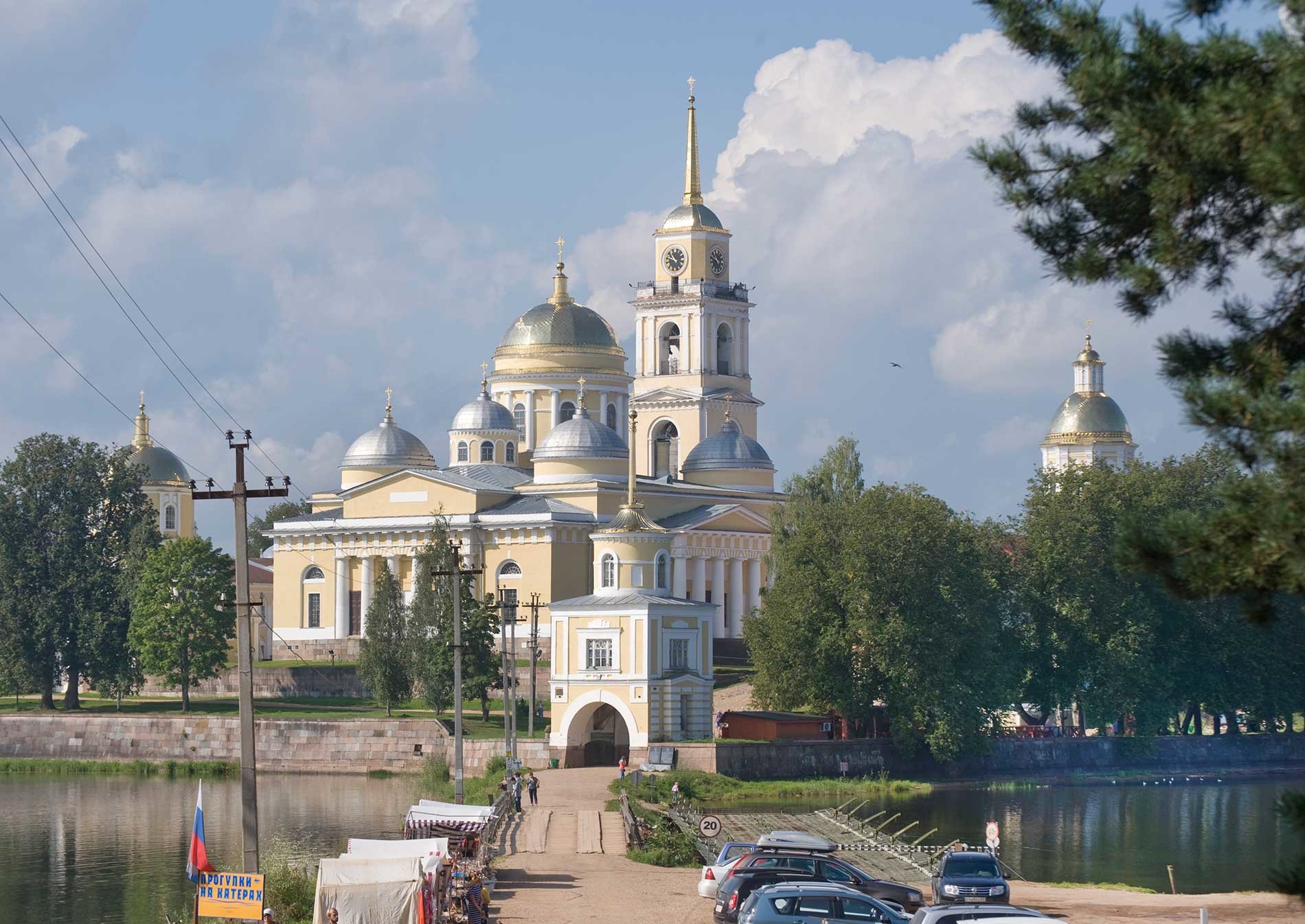 The main square is dominated by the Epiphany Cathedral and its bell tower. Since the end of the 16th century, there had been an Epiphany Church on the island, but over the centuries, it was rebuilt as the monastery expanded.

The monastery received a visit from Emperor Alexander I in May 1820, and the following year, work began on the present cathedral, a grand neoclassical structure conceived by the great Carlo Rossi, but completed by another major St. Petersburg architect, Joseph-Jean Charlemagne (1782-1861). The cathedral was consecrated in but required several more years of work on the interior. 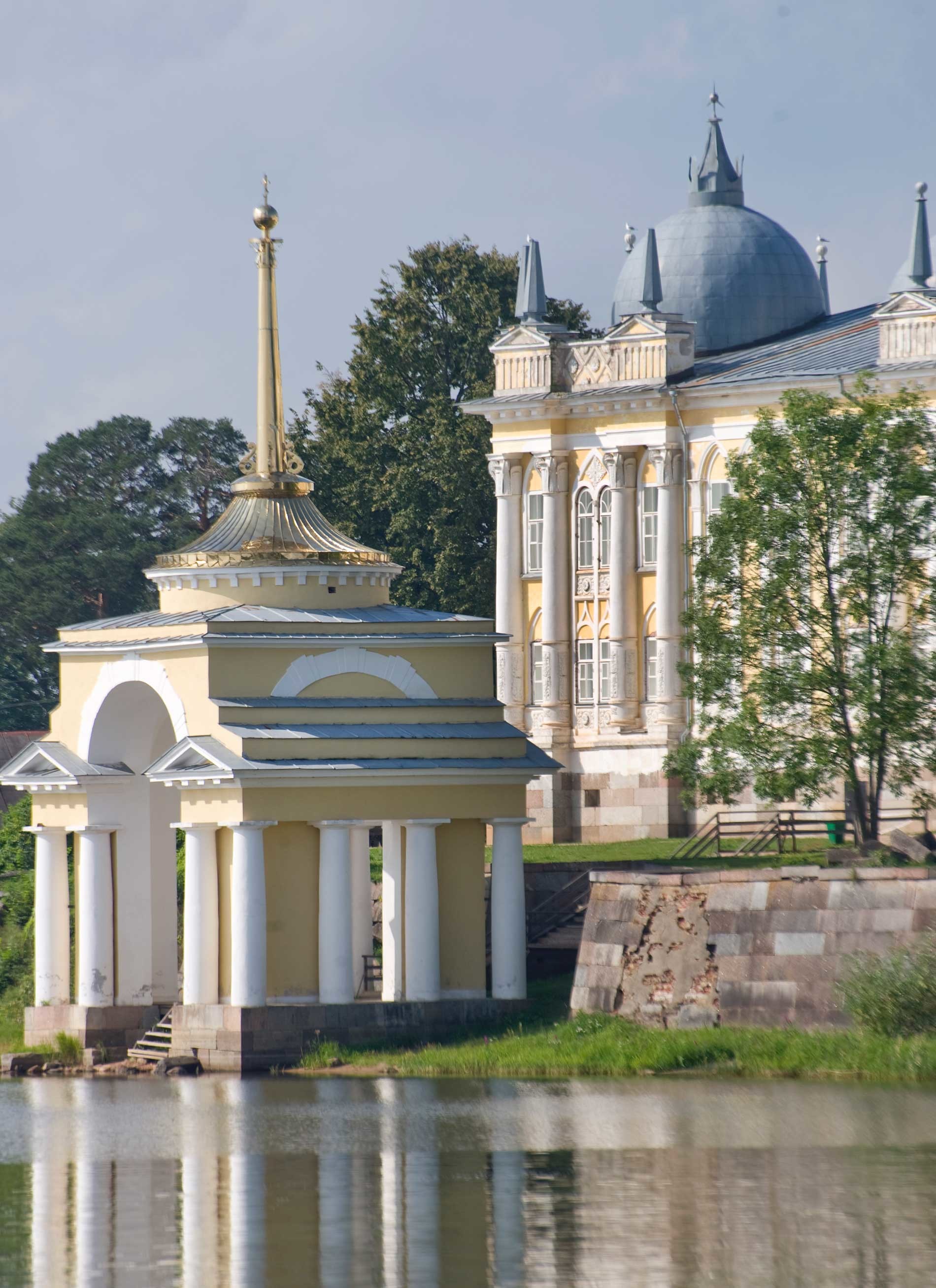 During the first half of the 19th century, other components of the ensemble were completed, including the exquisite Doric-style Archbishop’s Landing (1814) as well as the imposing south cloisters and Bishop’s Chambers, which were designed in a mixture of the neoclassical and the Gothic Revival styles. The sense of imperial St. Petersburg was amplified by the massive granite foundations and embankments the south and east sides.

All these monumental structures are visible in Prokudin-Gorsky’s remarkable photographs. Especially informative is the view toward the island ensemble from the village of Svetlitsa, with a wooden causeway leading to the immaculate grounds of the monastery. A broader view was taken from the village of Peski to the southeast. 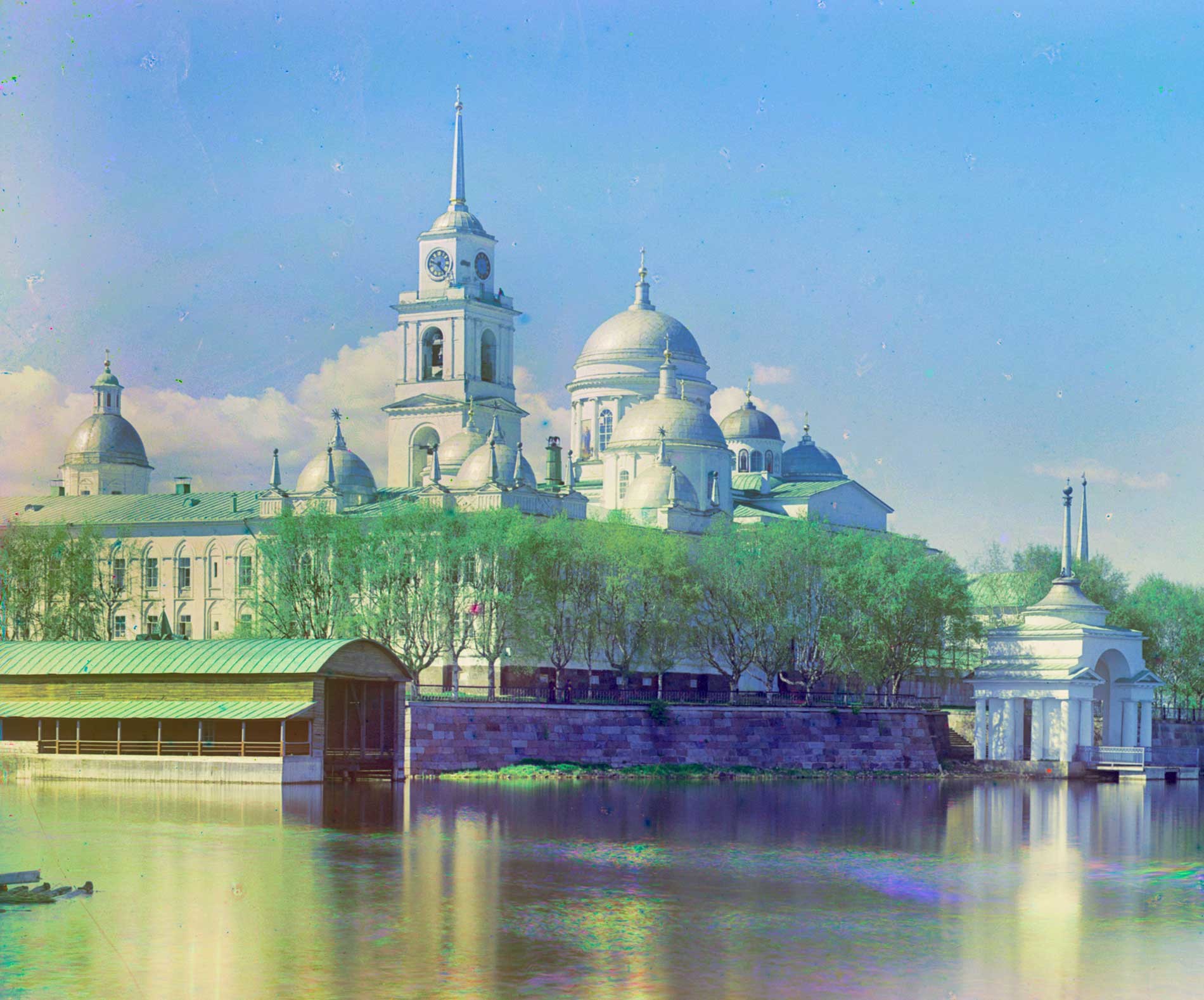 In August 2016, I took similar views from the water in a small boat provided by the monastery. The long exposures required by Prokudin-Gorsky’s color process could only be taken on a stable land base. (My Nikon camera allowed greater flexibility.) Fortunately, he was able to find suitable viewpoints from nearby shores.

Both Prokudin-Gorsky and I benefited from the summer clouds that hovered over Lake Seliger. They are almost motionless in the still air. This stillness was particularly beneficial for since it eliminated the mottled, blurred appearance of wind-blown clouds in some of his long exposures. 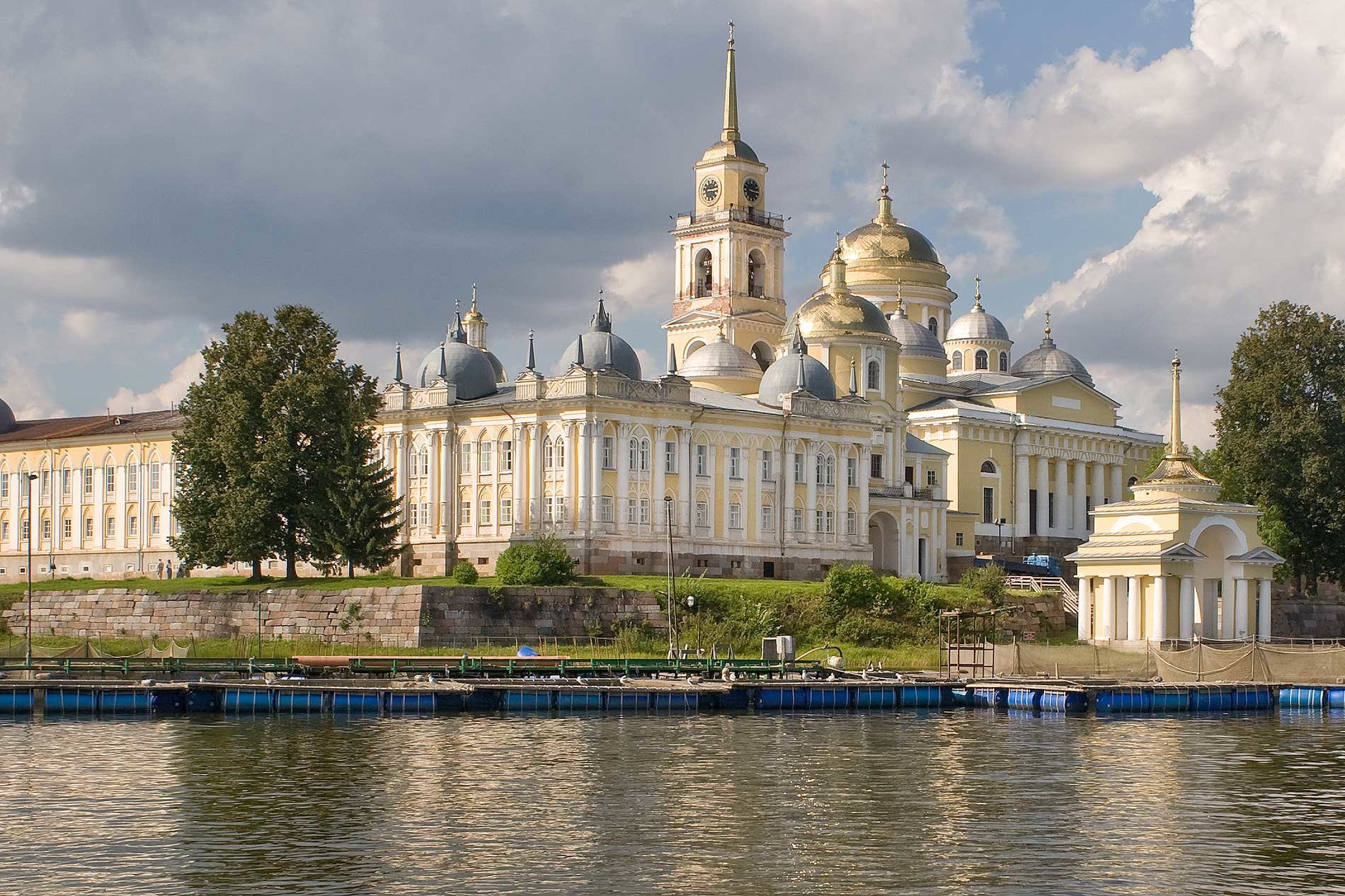 Following the Bolshevik Revolution, the monastic ensemble was subjected to widespread vandalism. Closed in 1928, it was often used as a place of incarceration. The area around the monastery was near the front lines during World War II. Battles in the area began in Fall 1941 and lasted until January 1943. The monastery itself was used as a military hospital throughout the war. From 1945 to 1960, it again housed juvenile delinquents, then for a decade, was used as a home for the elderly. 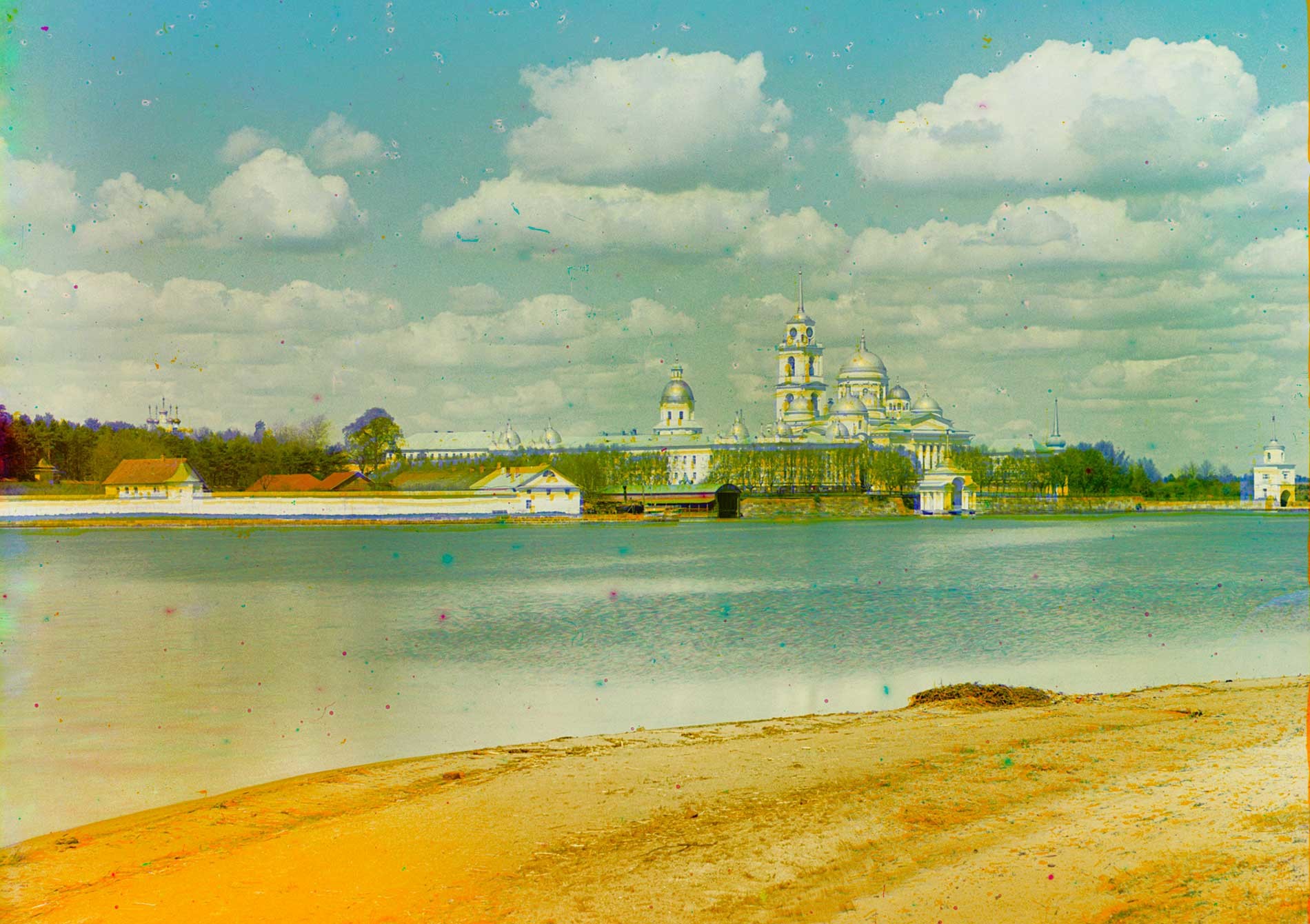 The restoration of the architectural ensemble has required prolonged effort, but each year brings significant progress. Throughout this Prokudin-Gorsky’s photographs have been highly valued as a reflection of the monastery at its apogee before war and revolution. 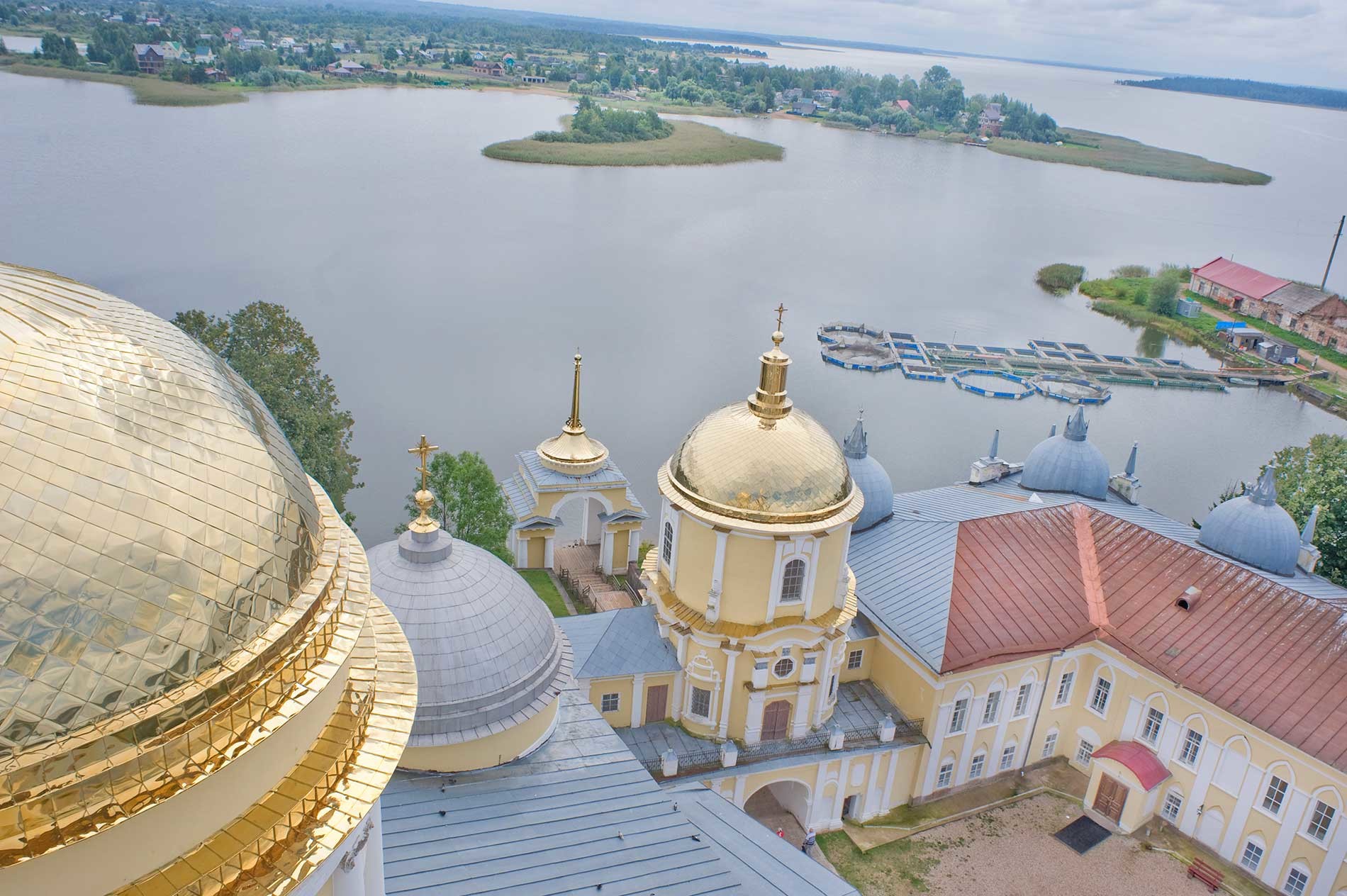