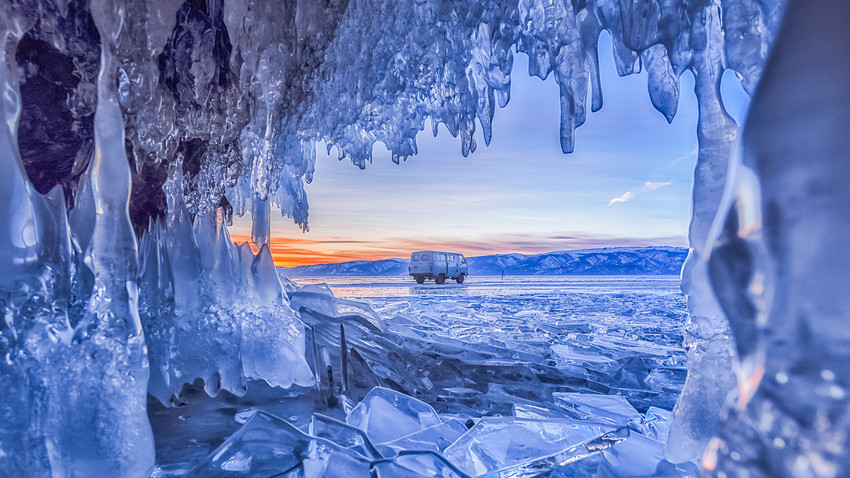 Getty Images
The country might not boast much in the way of zebras and coconut trees, but this list of lesser-known geographical facts is sure to raise an eyebrow or two. 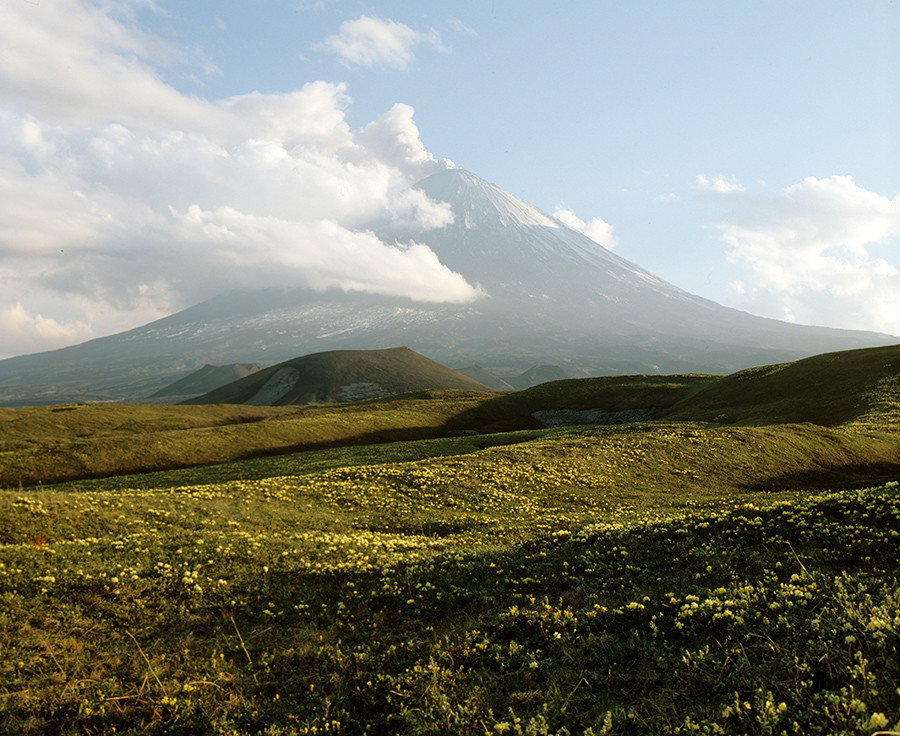 That’s right. And it’s not like we have to drive around volcanoes here. Most people in Russia have never even seen one. Nevertheless, the Klyuchevskoy stratovolcano isn’t just massive at 4,750 m, it’s also very active. This UNESCO World Heritage Site’s beautiful and steep symmetrical cone towers over the Ust-Kamchatsky district in Russia’s farthest eastern reaches, raining molten lava and ash on whomever dares approach it, and with increasing regularity since 1697.

Few ascents are undertaken because of the danger of lava being spat out at random, which has caused deaths in the past. Indigenous tribes also believe the mountain is sacred – a place from which our world is said to have sprung.

2. A lake with five separate layers 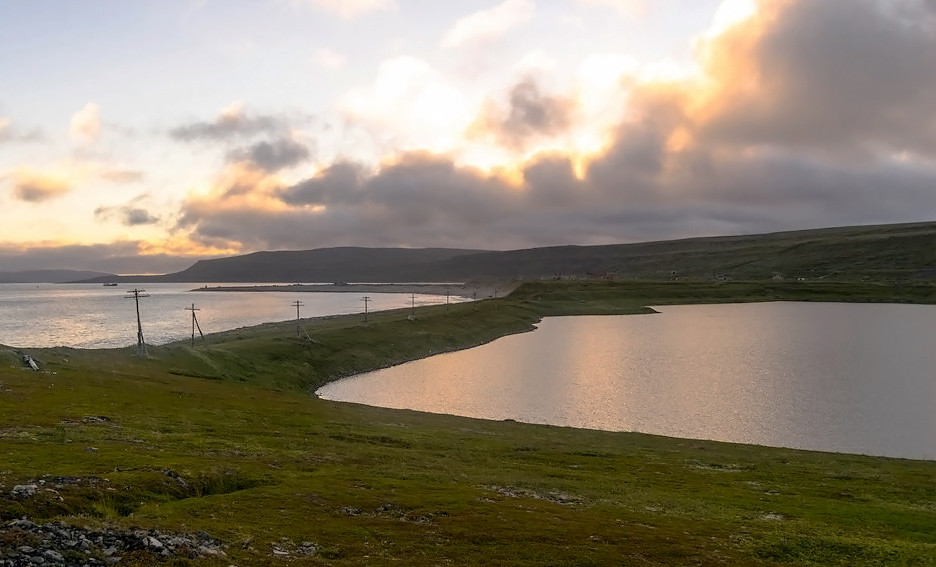 If you venture into the waters of the Barents Sea, next to the Kola Peninsula, you will encounter Kildin Island. What it hides is a scientific enigma so persistent they now believe it needs an extra protection status in the name of science: Lake Mogilnoe.

The lake – just 17 meters deep – is famous for comprising five separate aquatic layers, each with distinct conditions governing the variety of life there. The upper layer is six meters of clear water. Freshwater fish and organisms thrive here.

Below that, on the fourth floor, is slightly less salty water, offering a home to slightly more marine species, including jellyfish and crayfish.

Several meters below still, we see an increased presence of marine species, often referred to by scientists as “captives” of Mogilnoe, as they are captured and retained from the Barents Sea.

Then, something interesting takes place: we begin to see a layer of red water, taking its color from billions of red bacteria, acting as a sort of checkpoint, protecting the upper layers from the inhospitable floor below – filled with poisonous hydrogen sulfide. There, we only encounter bacteria that can survive without oxygen.

The WWF office in Russia is ringing alarms over the need for a special protection status for Mogilnoe, on top of the federally-protected reserve one it already has. Scientists have been trying to understand the lake for more than 200 years now, with some of its peculiarities still unexplained – such as how on Earth there are five separate layers, and how the saltwater and freshwater layers seem to be so well-balanced. 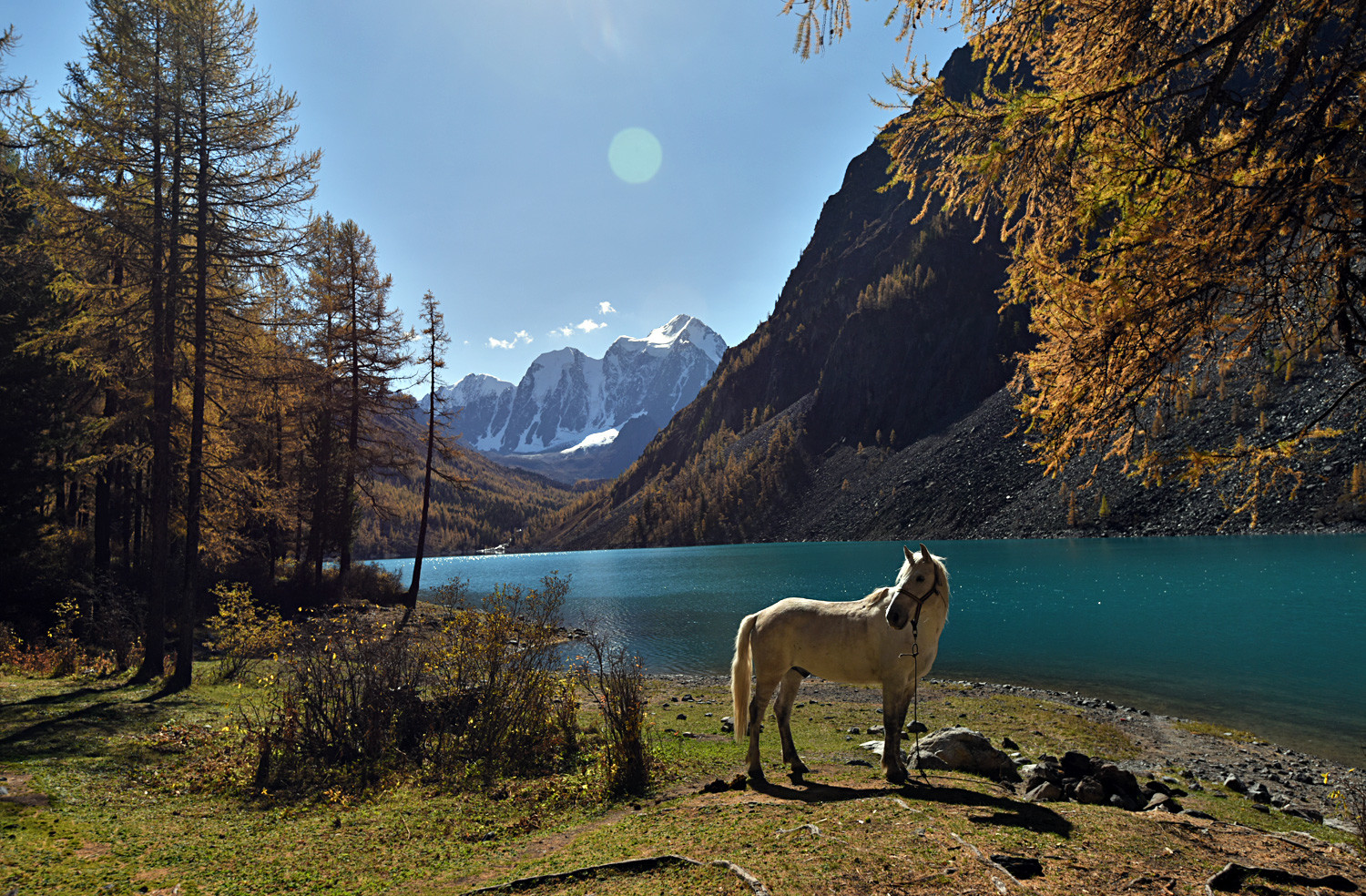 A horse grazes at Nizhneye Shavlinskoye Lake in the Kosh-Agachsky district of the Altai Republic.

About 70 sanctuaries, 49 giant national parks, and 103 nature reserves can be found in our country, measuring about four percent of its landmass. No matter where you are in Russia, there are nature spots just around the corner that look otherworldly and completely alien. Head over here for Russia Beyond’s pick of the top 10 you need to visit at least once. 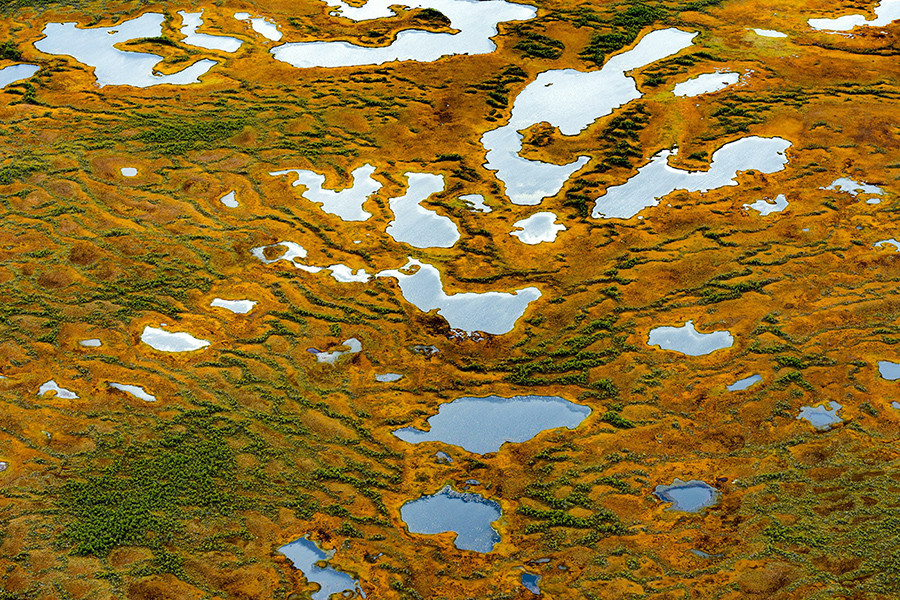 The Vasyugan Mire is the largest swamp in the northern hemisphere

OK, not exactly a thing of envy (and, no - we're not talking about the Russian oligarchy here), but take a second to imagine what 55,000 sq.km looks like… that’s right: Shrek’s wet dream; a swamp that is 20 percent wider than Switzerland. The Vasyugan swamp is in western Siberia, between the rivers Ob and Irtysh. It also serves as an important source of freshwater, and is home to a whole plethora of wildlife species. It doesn’t get many tourists despite being mostly shallow, so here’s hoping we’ve just changed all that. 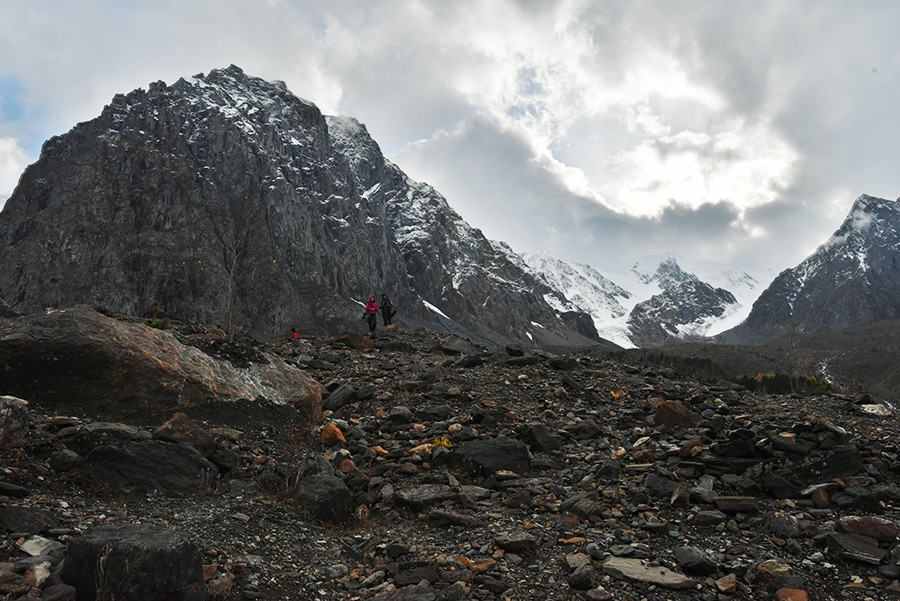 Karatash Mountain in the Altai Republic

If we were to see how the world’s mountain ranges stack up in terms of age, the prize would have to go to the Barberton Greenstone Belt, situated in South Africa, and boasting about 3.6 billion years and counting. However, looking at separate mountains, Mount Karandash (literally, “Pencil”) in Russia is the oldest with 4.2 billion years. Considering that our planet’s total age is 4.6 billion years, this is downright incredible. Meanwhile, the Ural Mountains themselves are collectively no more than 350 million years old. But Karandash’s age isn’t the most jaw-dropping thing about it: The mountain is made almost entirely of izrandite – an inorganic type of black rock; a material so weird, some scientists believe it might have alien origins. 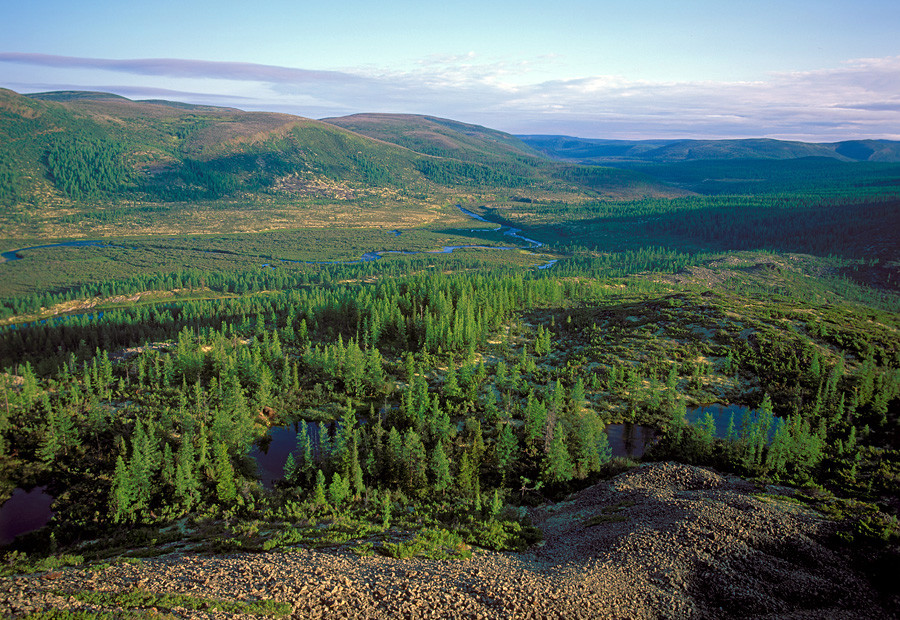 If we were only covering forests, we’d have to give this one to the Amazon rainforest, with a total area of about 5.5 sq. km. But the taiga is still the largest biome in the world, next to the ocean. And the east Siberian taiga is its largest representative together with the one in Canada, though precise measurements depend. The Russian usage of taiga differs from the North American one. There, the term “boreal forest” is used to describe the woodland part, while taiga is only used to denote the inhospitable and barren north. With an area of nearly 10 million sq. km, the Siberian taiga is massive, with Siberia itself stretching all the way from the Tundra down to the temperate mixed forests in southern Russia, bordering Mongolia and China – which amounts to nine percent of the world’s land mass. The flora and fauna there are amazing in terms of adaptability, having to withstand temperatures between 40 °C in the summer and -62 °C in the winter. The east Siberian taiga is the country’s closest link to continental America, with a large number of plant and animal species colonizing both parts, which were once joined by the Bering land bridge. Meanwhile, western Siberia is home to the world’s largest open plain.

7. The world’s deepest lake and biggest source of freshwater 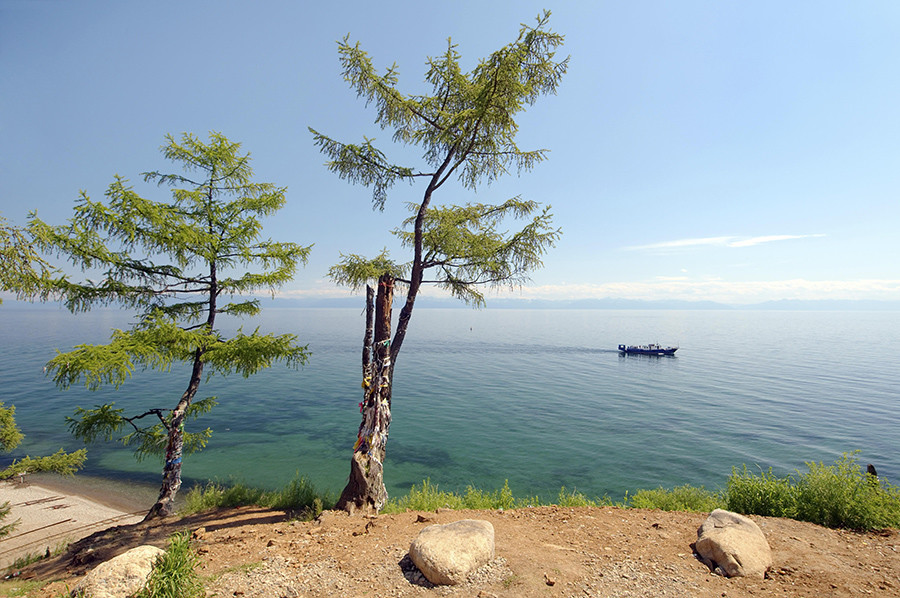 For sheer size, look no further than Lake Baikal, located between southern Siberia and Mongolia. Not only is this mass of water over a kilometer deep in parts, it’s also the world’s largest source of fresh water, containing some 23 cubic km of the wet stuff. Fun fact: All the world’s major rivers – from the Amazon, to the Thames, to the Ganges, and so on – would need to flow for an entire year to fill the Baikal basin, itself fed by over 300 rivers. The ancient body of water drains into the Yenisei River, which in turn flows northwards into the Arctic.

Similar to the Atlantic Ocean, the slender Baikal widens by an inch each year, due to gradual tectonic shifts.

Last but not least: Baikal was ground zero for the underwater study of neutrinos, and is home to the world’s first underwater neutrino telescope – tasked with studying cosmic processes and searching for new particles, including those that strongly hint at the fabled dark matter. The Baikal Deep-Underwater Neutrino Telescope is part of the lake’s multipurpose laboratory, and is incorporated in the global network of neutrino telescopes, GNN.

8. The only country in the world to border 12 seas and 16 countries 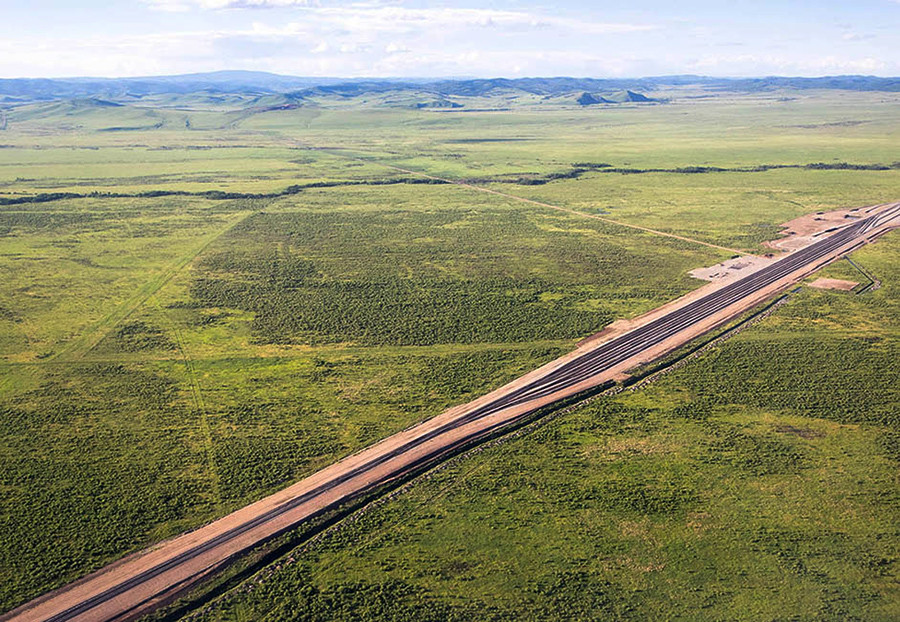 The steppes in Zabaikalie

Twelve seas from three ocean basins, to be precise: The Baltic Sea, Black Sea, Sea of Azov, Barents Sea, White Sea, Kara Sea, Laptev Sea, Chukchi Sea, East Siberian Sea, Sea of Okhotsk, and Bering Sea. And that’s not including the Caspian – which would love to be a sea, but is actually a sea-lake. What is strange about all of this is our country’s almost complete lack of access to warm-water ports that aren’t frozen for most of the year. Although Russia enjoys vast marine resources, its situation with trade routes could be better: even in the Pacific, the moment you leave port, you end up in Japanese waters. Not ideal. To make matters worse, Russia is bordered by 16 countries – that’s two more than China – making defense a nightmare.