The great Smolensk citadel: Russia's bulwark in the West 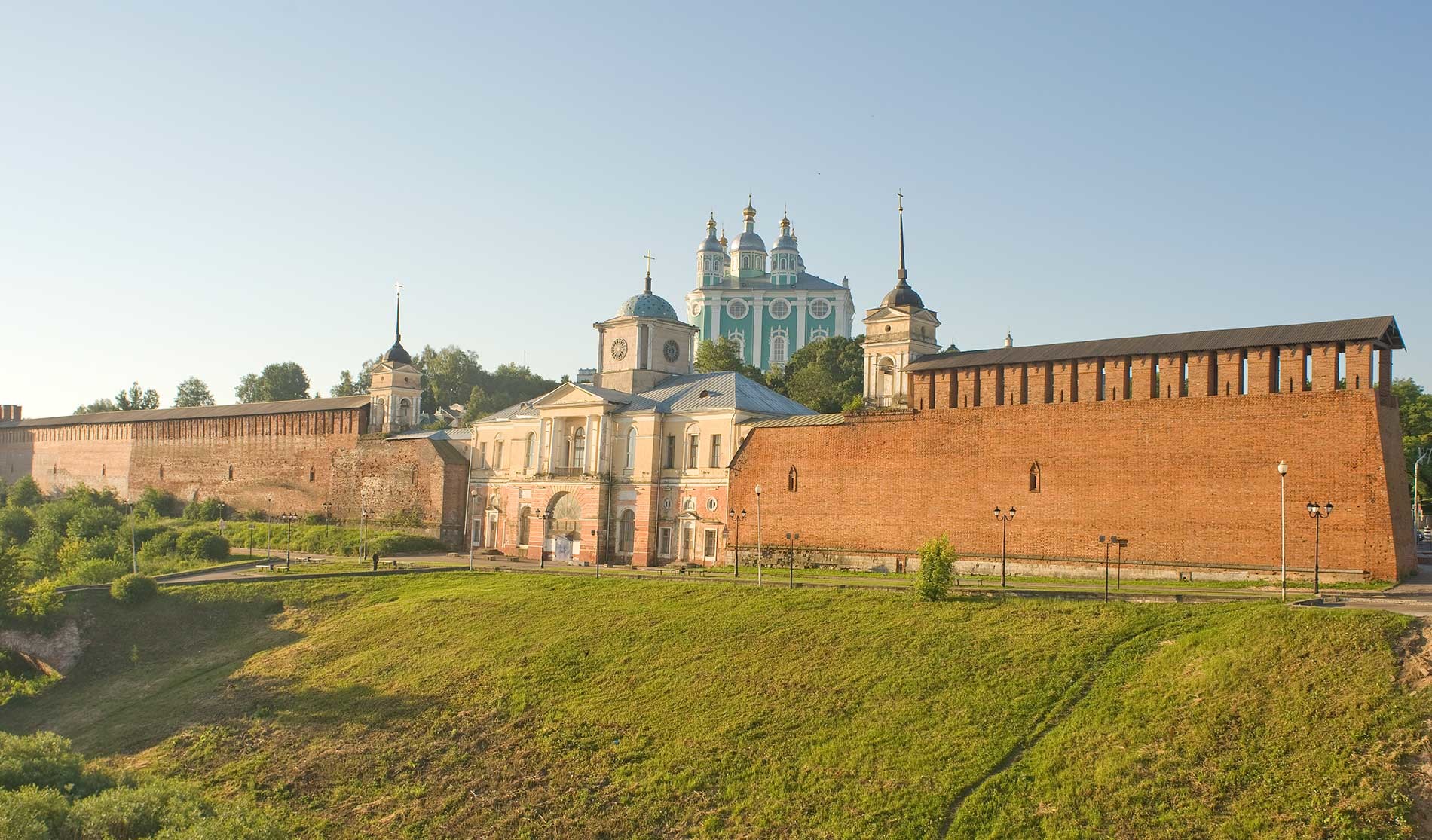 Smolensk citadel. North wall and Gate Church of the Hodegetria Icon of the Virgin. Northwest view from Central Bridge over Dnieper River. July 1, 2014

At the beginning of the 20th century, the Russian chemist and photographer Sergei Prokudin-Gorsky developed a complex process for color photography (see box text below). Inspired to use this new method to record the diversity of the Russian Empire, he undertook numerous journeys, one of which involved photographing sites linked to the centenary of Napoleon’s 1812 campaign against Russia 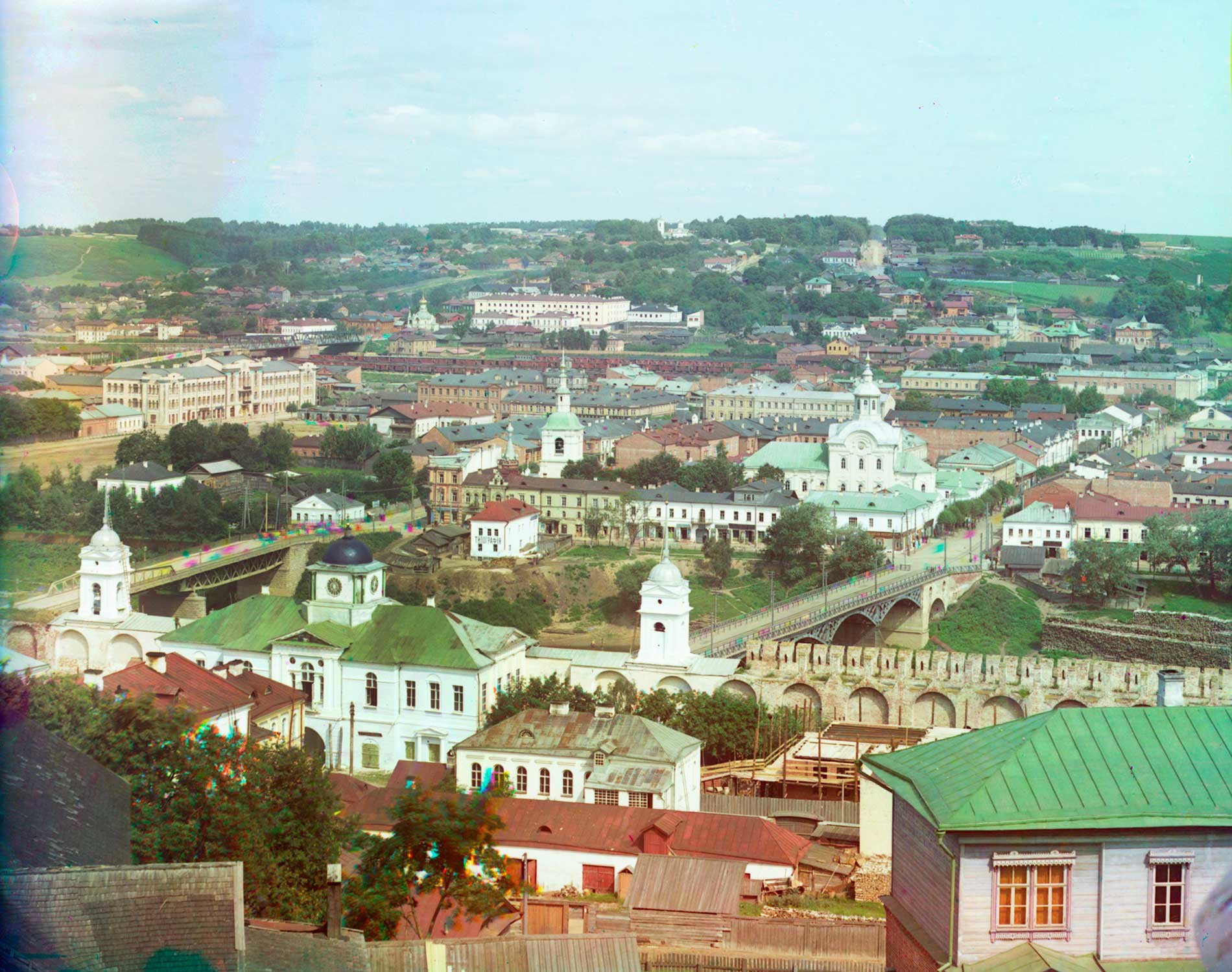 Smolensk. View north from Dormition Cathedral bell tower. North wall and Dnieper Gate with Gate Church of the Hodegetria Icon. Beyond the two bridges across the Dnieper River is the Church of St. Nicholas. Summer 1912

special note is Prokudin-Gorsky’s work during the summer of 1911 in the city of Smolensk, site of a titanic struggle between Napoleon’s main forces and a Russian army commanded by Michael Barclay de Tolly. Prokudin-Gorsky was especially taken by the city’s grandiose fortress, whose walls and towers he photographed in detail. I photographed those walls a century later, in 2006 and 2014.

Contemporary Smolensk is a pleasant provincial capital (population around 325,000) graced with parks and lush greenery. Yet this placid appearance belies one of the most turbulent histories in European Russia. Its strategic position on major north-south and east-west routes been both a blessing and a curse. From the 16th century to the 20th, the city experienced several clashes with forces from the west 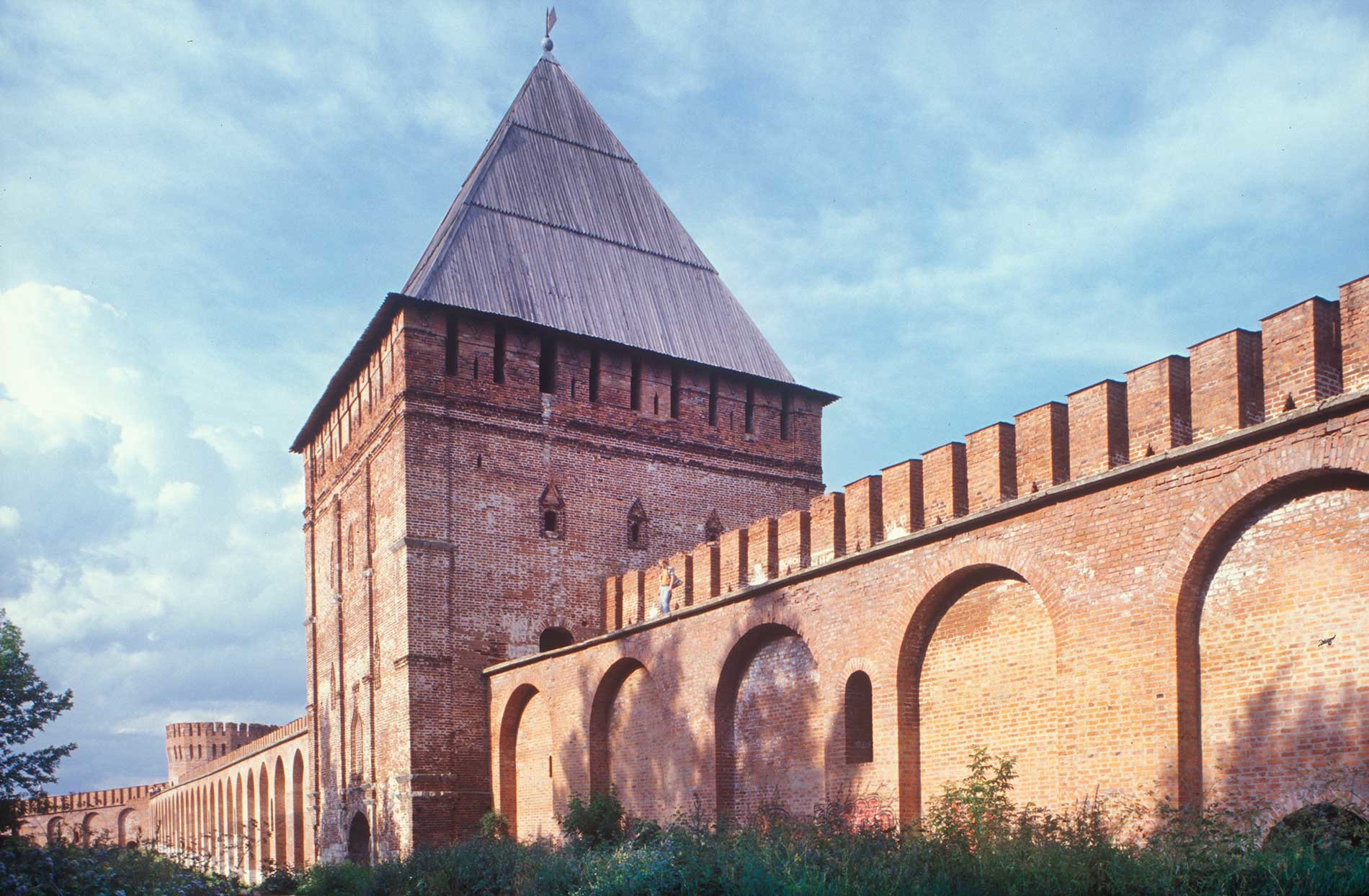 is among the oldest historic sites in Russia. First mentioned in medieval chronicles under the year 862, the early settlement was a center of the Krivichi, an eastern Slavic tribe. Smolensk’s location on the upper Dnieper River placed it on the lucrative trading route between the Baltic and the Black Seas, from “the Varangians to the Greeks.” By the late 9th century, the town had been brought into the orbit of Kiev, of the Varangian princes of the Riurikovich dynasty on the middle Dnieper River.

With the conversion of Kiev's Grand Prince Vladimir to Orthodox Christianity in 988, Byzantine forms in architecture and art came to the Dnieper River basin. In the 1050s, Smolensk emerged as a subordinate principality that eventually came to rival the power of Kiev itself. To this day, Smolensk has some of the oldest churches in Russia 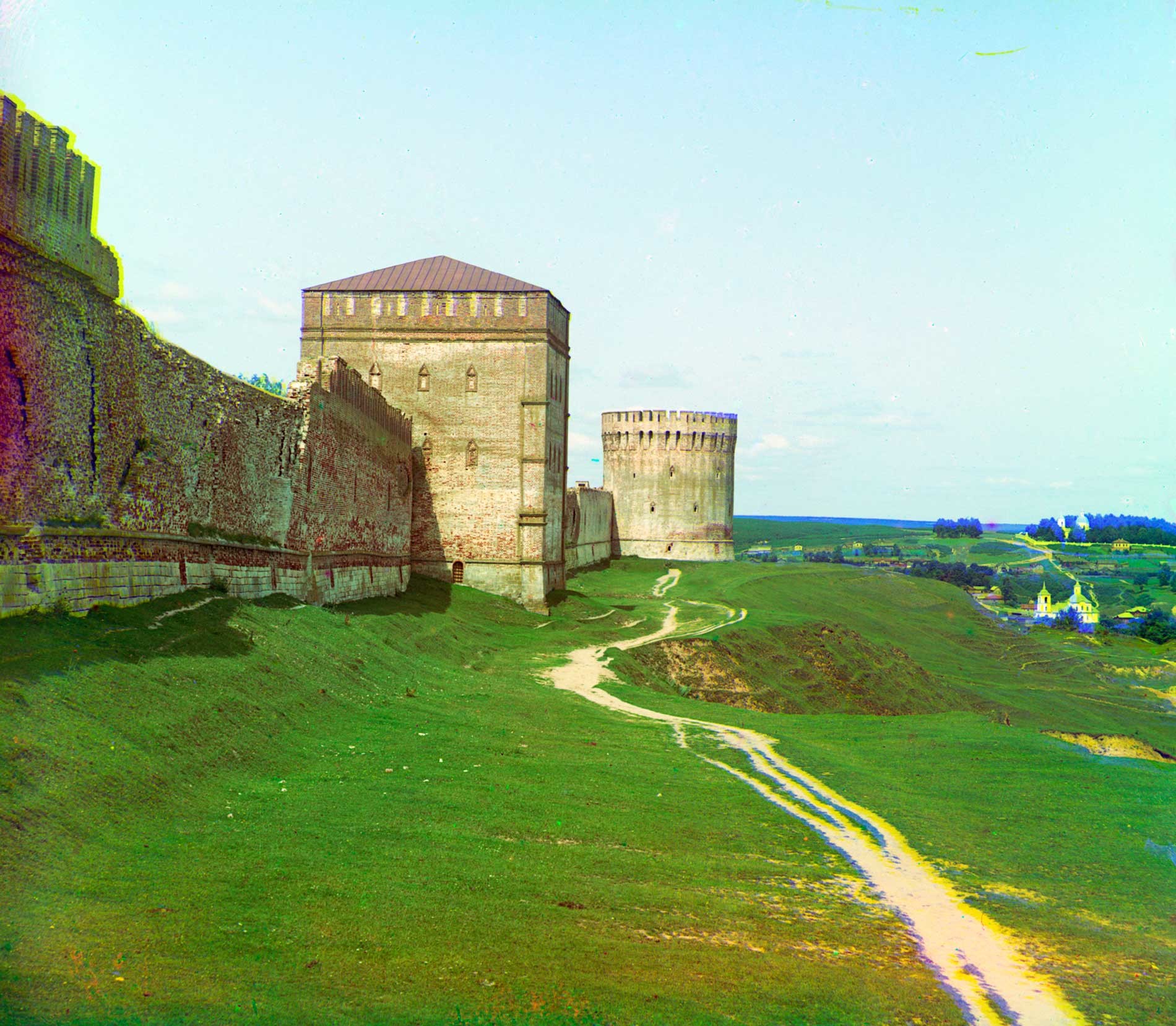 was spared the devastation of the Mongol invasion that began in the winter of 1237-38. (Kiev, in contrast, was largely destroyed in 1240.), For the next four centuries, control over Smolensk alternated between the Grand Duchy of Lithuania, Poland Moscow. The capture of Smolensk in 1514 by Basil III of Muscovy is considered a major event in Russian history.

A project of monumental scale

The strategic importance of Smolensk was reaffirmed by Tsar Boris Godunov (1551-1605), who saw it as a bulwark against Poland and undertook a fundamental rebuilding of the city walls between 1595 and 1602. The fortress was one of the largest Russian construction projects before the reign of Peter the Great. It had 38 towers along walls more than 4 miles long. In contrast, the walls of the Moscow Kremlin stretch less than 1.5 miles 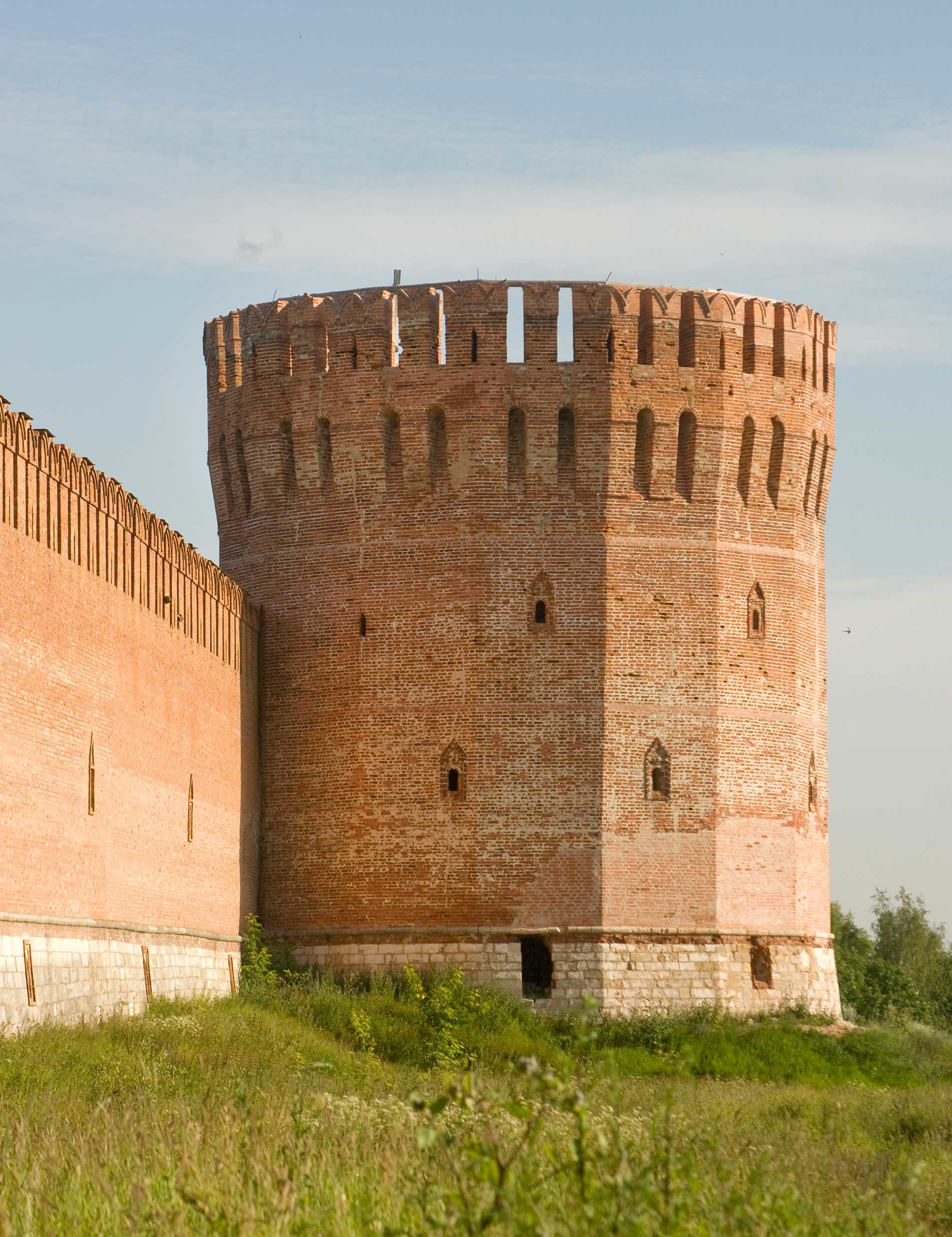 of the citadel, supervised by the engineer Fyodor Kon, required a vast mobilization of resources and compulsory labor from a large area under Muscovy’s control, including and private brickyards enlisted in state service. During this period, masonry construction not connected with state service was prohibited on pain of death.

The production of the 100 million bricks needed for the Smolensk walls, and the great of limestone blocks used for their base, in addition to lime, iron, and other components, could only have occurred with the standardization of building materials, particularly brick sizes. This production and the large labor force were organized under a centralized administrative system expanded under Godunov's able guidance. One of the main components of that system was the Office of Masonry Work (Kamennyi ) that had been created in 1584 and used by Godunov to encourage masonry construction for as well as state projects 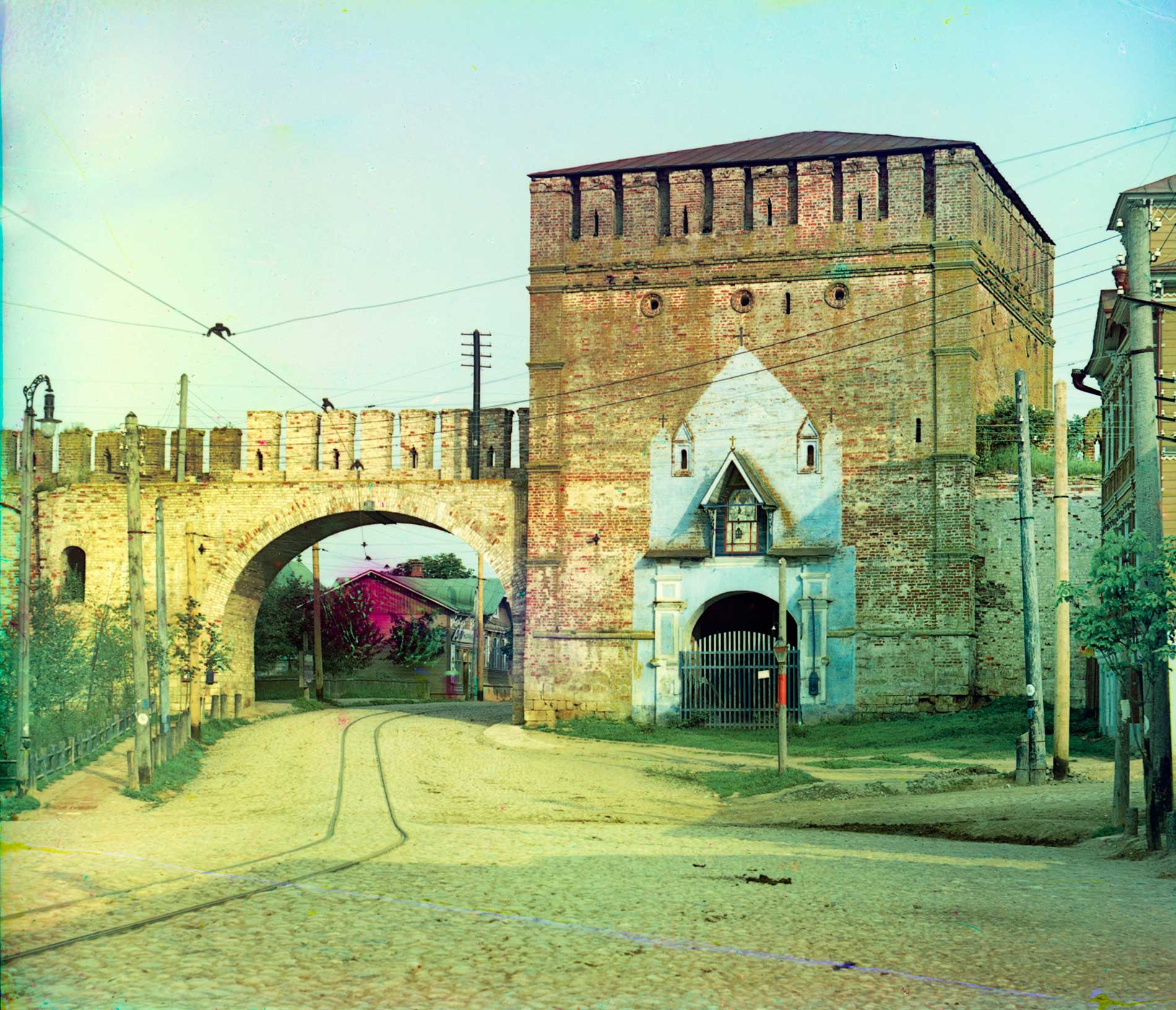 long walls had interior passageways and were crowned with crenellation to protect firing positions of the defenders. Many of the towers were square, but especially important points were dominated by massive polygonal towers such as the Eagle (Oryol) Tower on the south wall. Both Prokudin-Gorsky and I gave special attention to this tower.

Despite these forbidding walls, Smolensk was lost again to the Poles during Russia's dynastic crisis known as the Time of Troubles. From the time of Godunov's death in 1605 until the end of the 1610s, Russia was wracked by foreign invasion. In June 1611, Smolensk fell to the Poles despite the citadel’s heroic resistance in a 20-month siege. An attempt to retake Smolensk during the Russo-Polish War of 1632-34 (also known as the Smolensk War) failed ignominiously 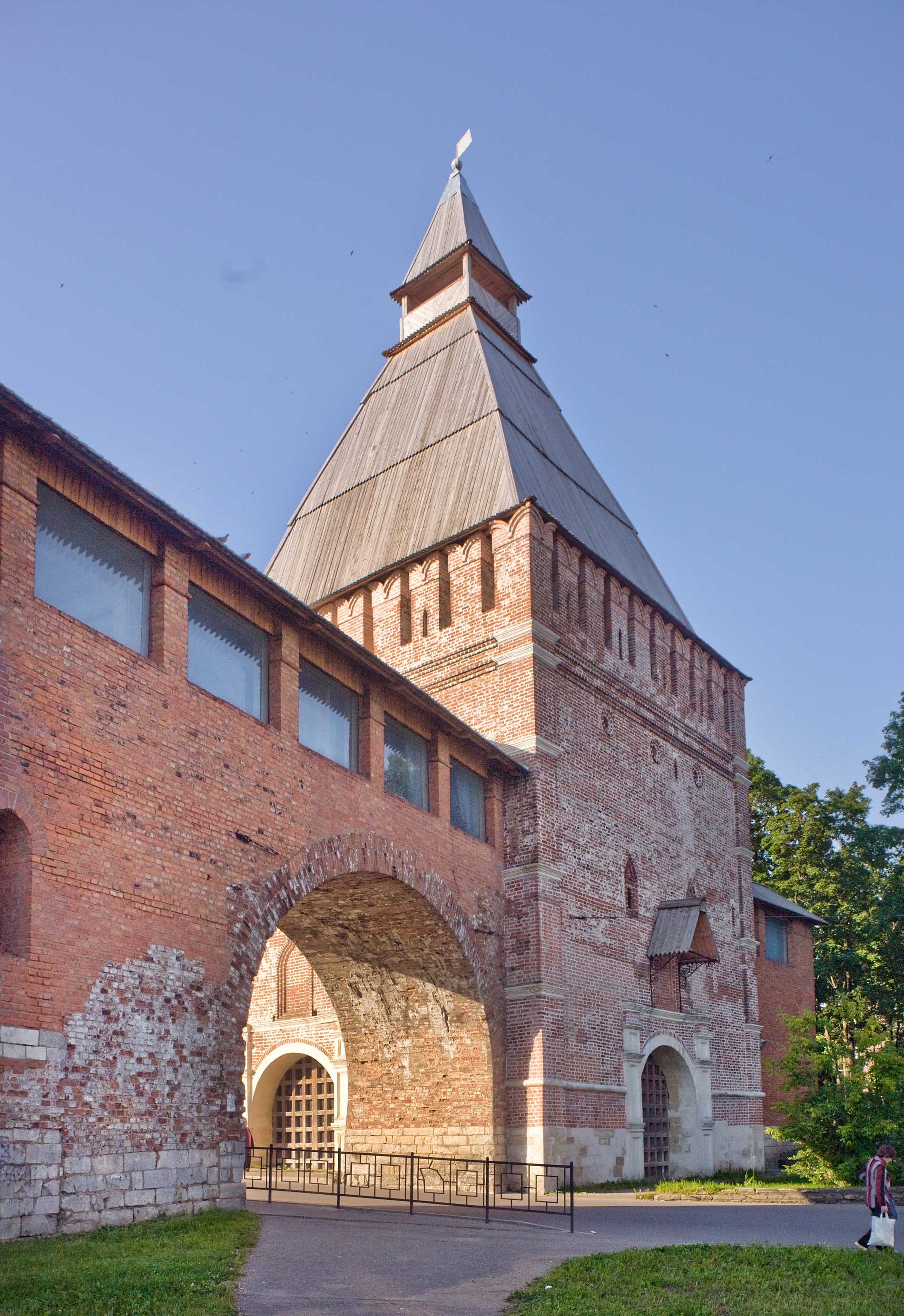 did not return to the Muscovite fold until a successful campaign in 1654. With the Andrusovo Truce of 1667, Moscow's possession was formally acknowledged by Poland and confirmed again by the Treaty of Eternal Peace between the two countries in 1686. 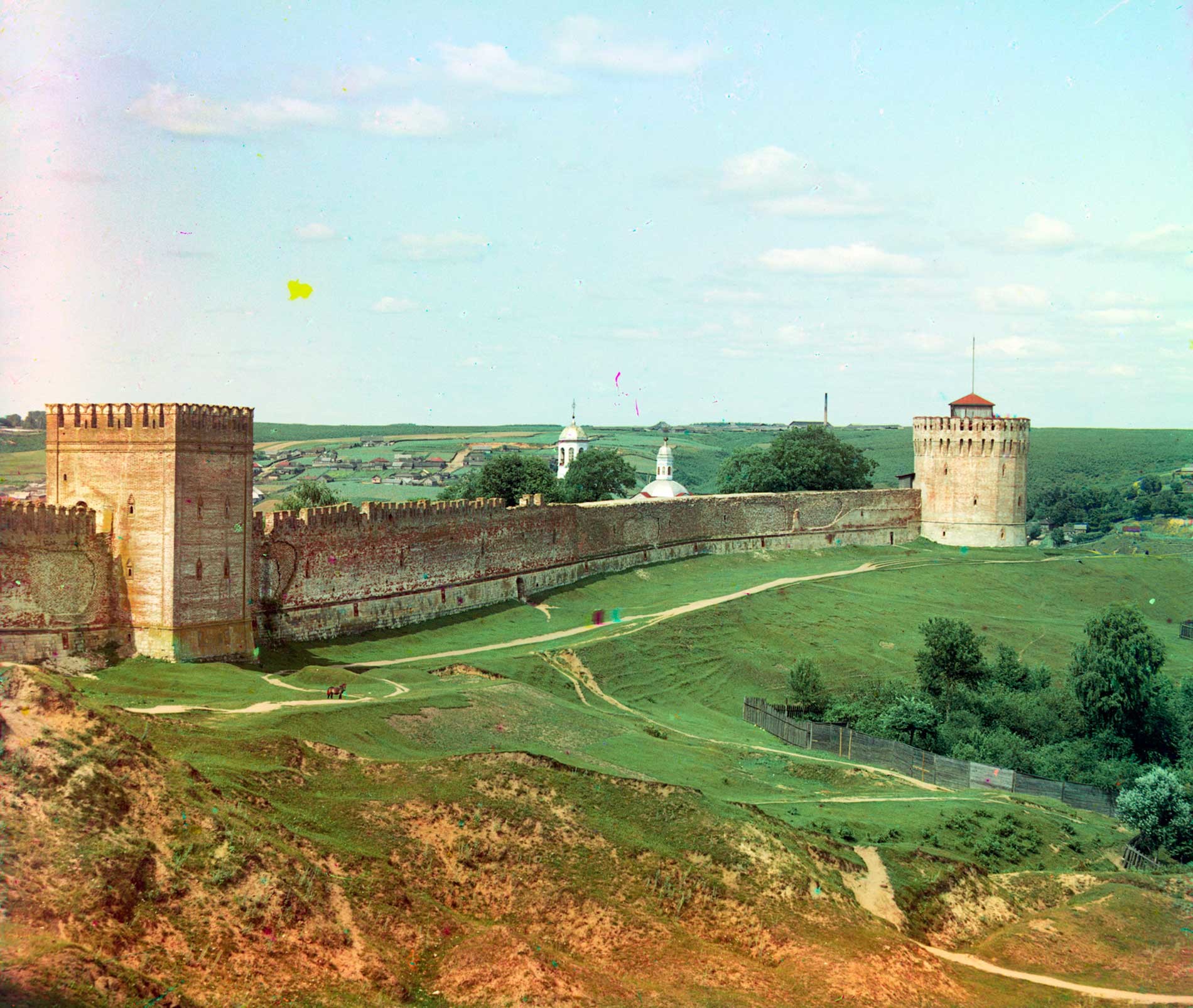 city's next military cataclysm occurred in mid-August when one of the major battles of the Napoleonic invasion was fought at Smolensk. Described in compelling detail by Leo Tolstoy in War and Peace, the Smolensk battle allowed the Russian army to retreat in fashion but at loss to the burned city. Only churches and most of the fortress walls remained relatively intact.

An important railroad hub at the beginning of the 20th century, Smolensk endured the chaos of World War I and the Russian Civil War. During the 1930s, when medieval fortifications in other cities were dismantled for building material, the surviving segments of the Smolensk citadel were largely preserved 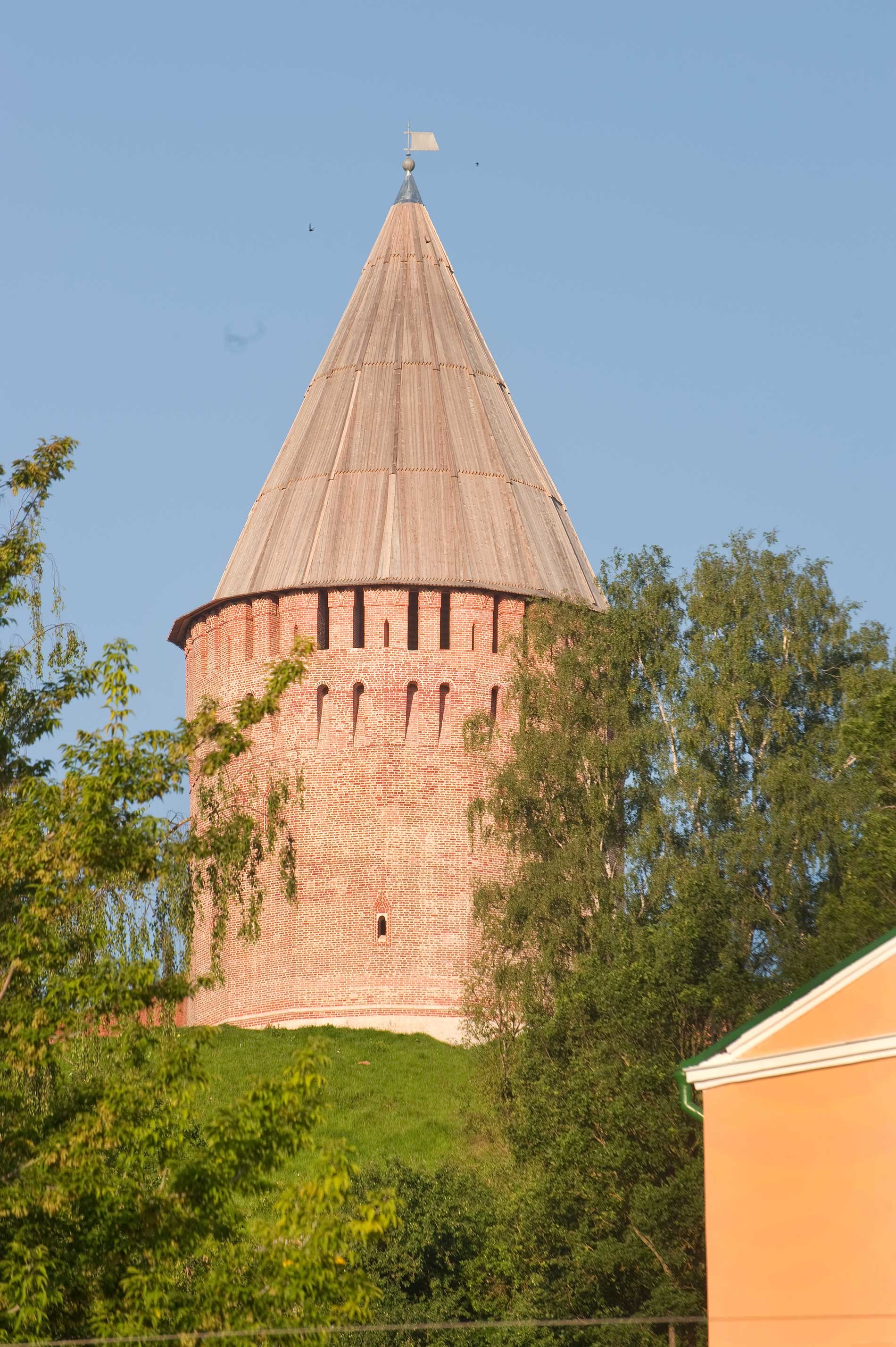 city’s greatest trial came with the German invasion of the Soviet Union on June 22, 1941. The Battle of Smolensk in late summer 1941 resulted in one of the worst Soviet losses, but the desperate struggles in that area gave the Red Army essential time to form defensive positions in front of Moscow during the following months.

Smolensk was liberated by the Red Army in late September 1943, but the town had suffered enormous material and human losses. Fortunately, the bulk of the fortress walls remained. In the decades since the war, much of the historic city has undergone extensive renovation. Collapsed portions of the north, east and south ranges have been rebuilt with their crenellation, and most of the towers now have steep wooden caps 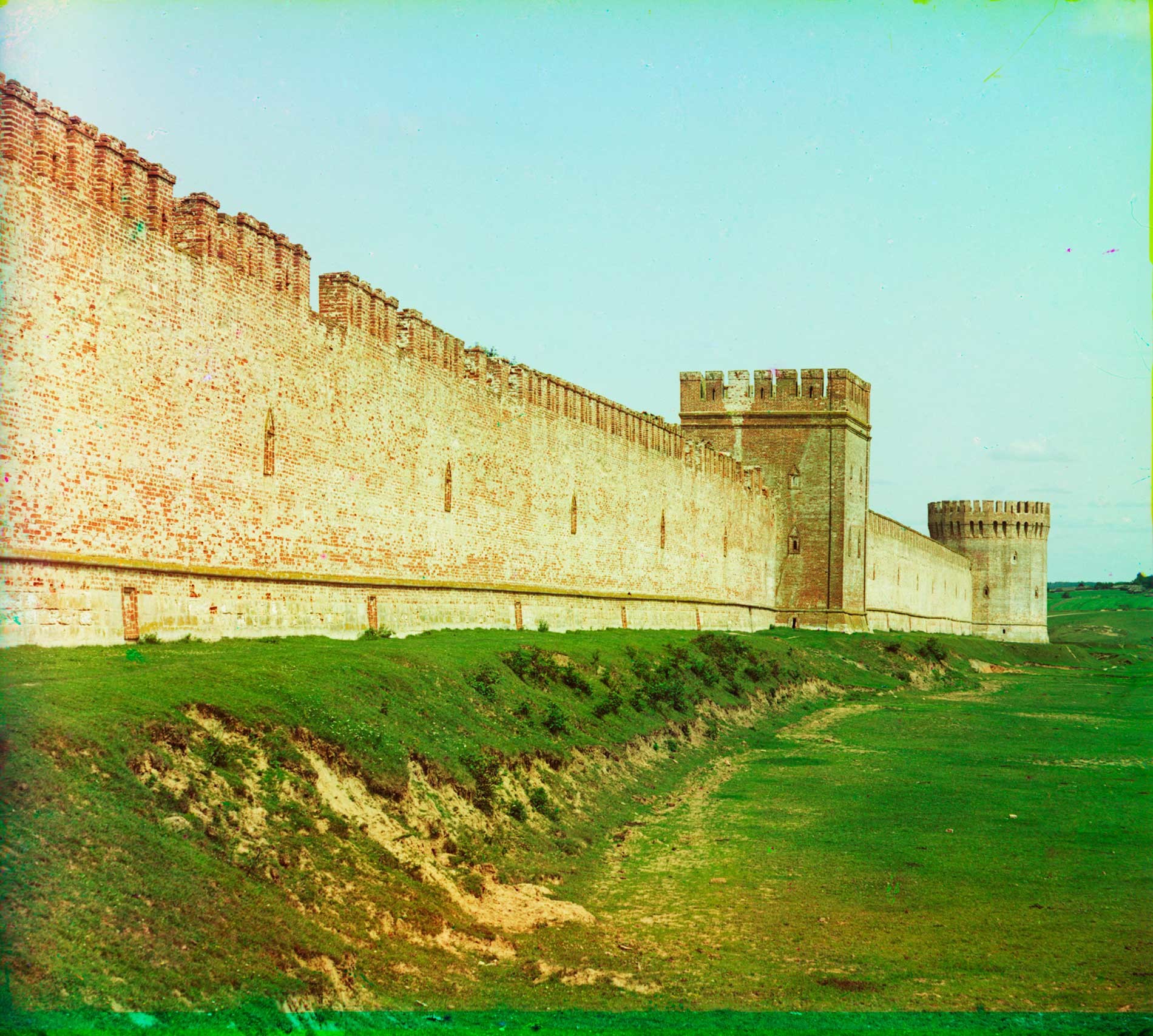 impressive is the north wall (see pic. 1) along the Dnieper River, with the grand Dormition Cathedral rising on a hill above. The walls are now surrounded by parks, meadows groves that create an attractive natural zone within easy reach of city. After the turbulence of the 20th century, Prokudin-Gorsky’s photographs have profound value in documenting a citadel that is among Russia’s greatest monuments 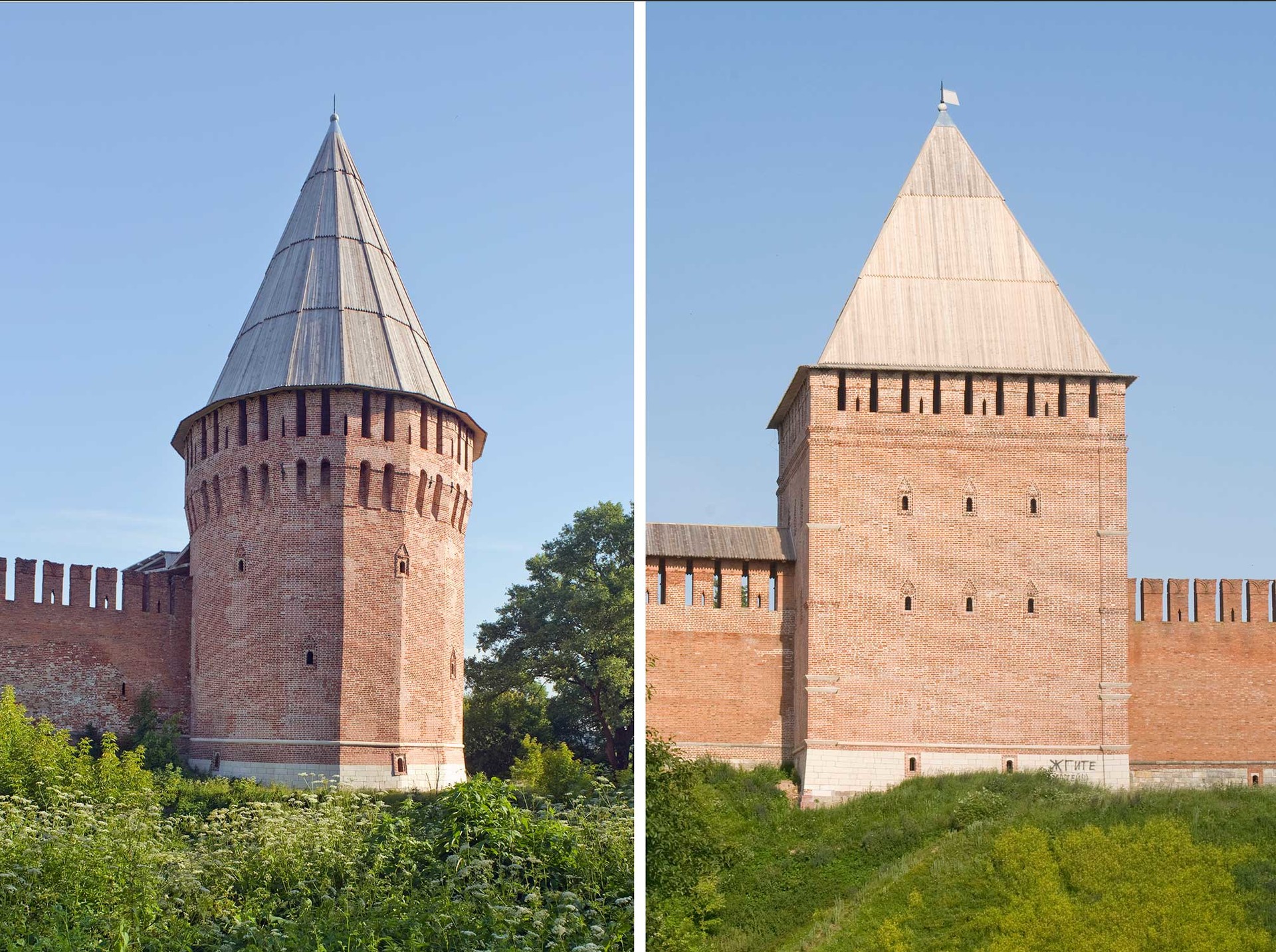