Travel
William Brumfield
The complex and its bells have been recognized as a symbol of Russia. 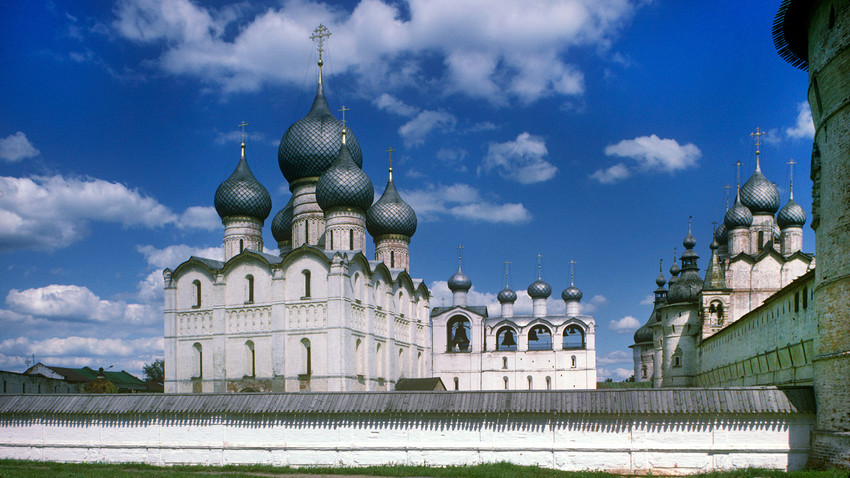 At the beginning of the 20th century, the Russian chemist and photographer Sergei Prokudin-Gorsky developed a complex process for color photography (see box text below). Inspired to use this new method to record the diversity of the Russian Empire, he undertook numerous journeys across the country between 1903 and 1916.

Prokudin-Gorsky’s vision of photography as a form of education and enlightenment was demonstrated with special clarity in his photographs of medieval architecture in settlements such as Rostov Veliky (the Great), which he visited in 1911. My own work in Rostov covers a period from 1987 to 2012 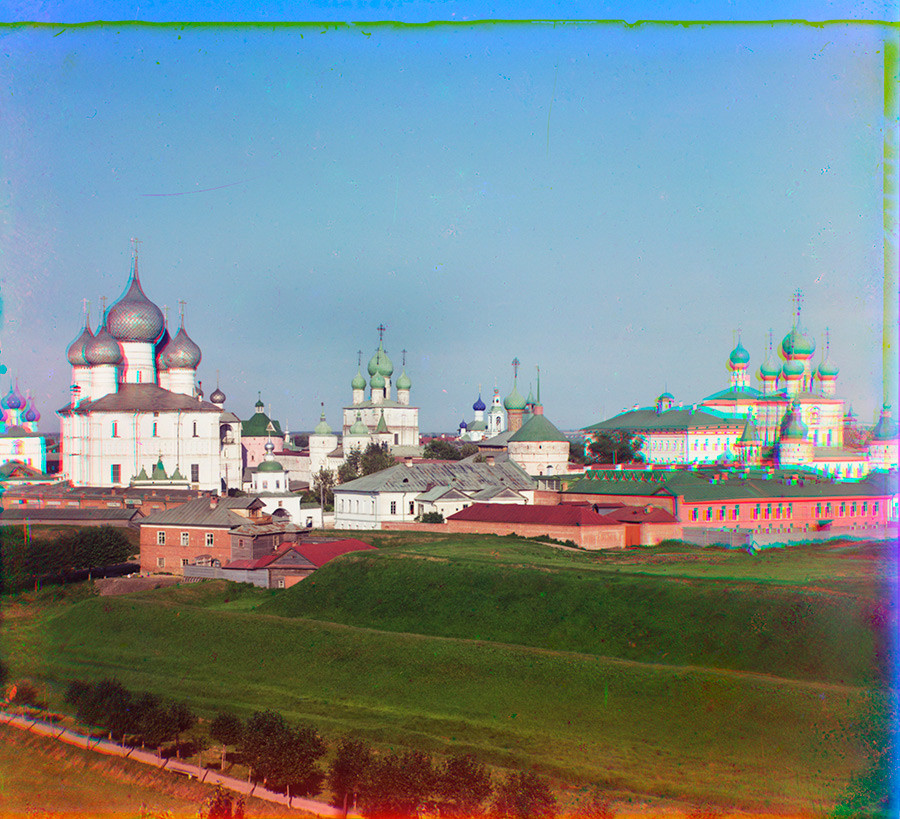 some 130 miles northeast of Moscow, Rostov was first mentioned in chronicles under the year 862, which also is considered the founding year of the entity known as medieval Rus. Rostov reached the apogee of its architectural glory in the 17th century during the 30-year reign of Tsar Alexei Mikhailovich Romanov (1629-1676), father of Peter the Great. 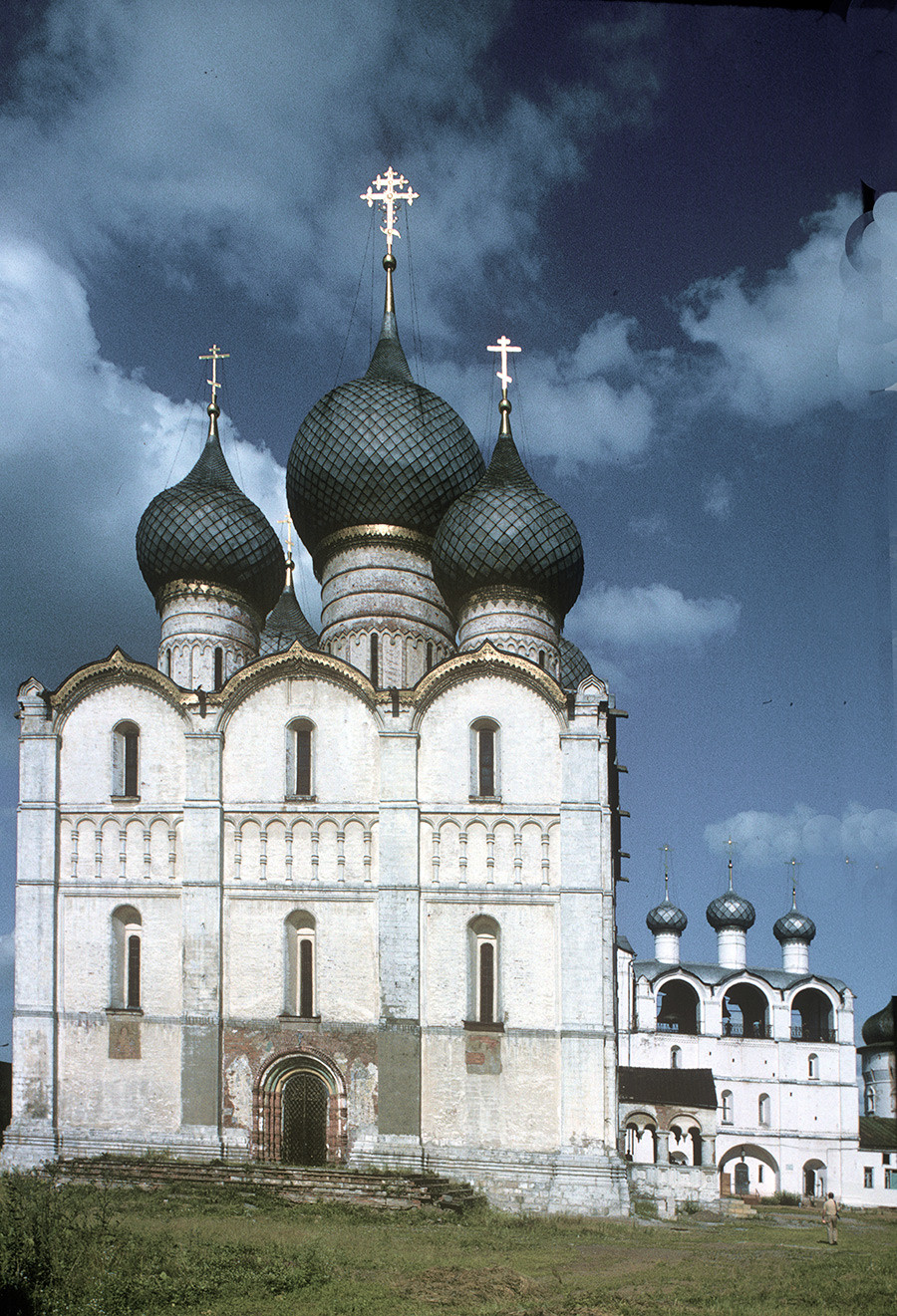 town’s main landmark, popularly known as the Rostov Kremlin, was formally designated the Metropolitan’s Court because of its function as the residence of the Rostov Metropolitan, an important church official. Constructed primarily in the 1670s and 1680s by the powerful Metropolitan Jonah Sysoevich (ca. 1607-1690), the ensemble is considered one of the defining architectural works of late medieval Russia 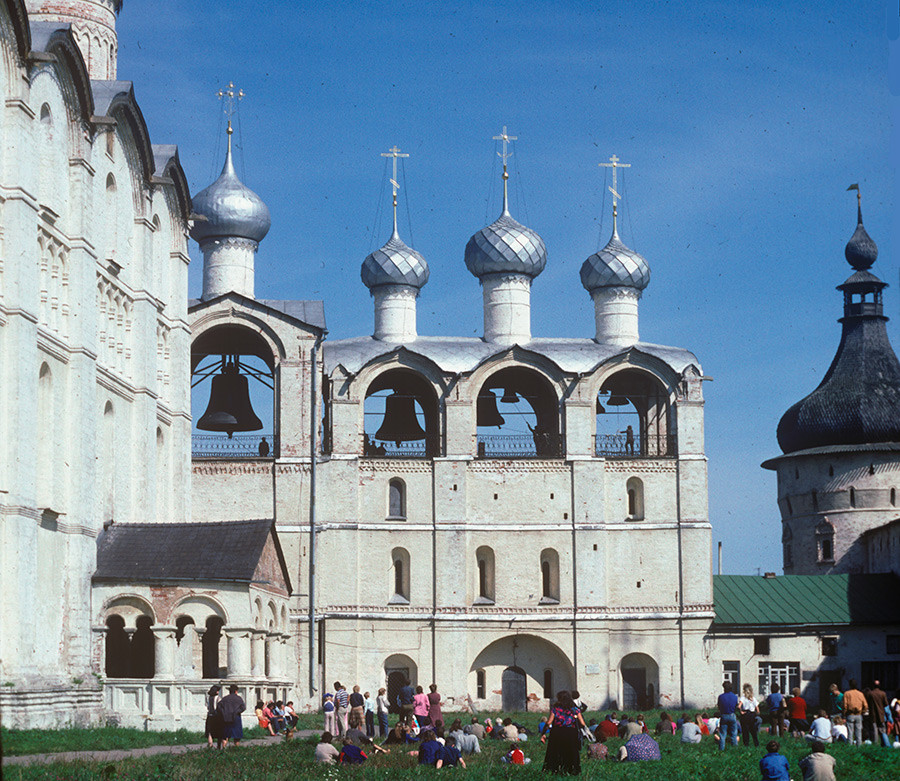 the second half of the 17th century, the idea of an enclosed ensemble representing in material terms the magnificence of the spiritual realm gripped the imagination of those Orthodox hierarchs who controlled sufficient resources to implement their vision. This concept of the sacred precinct could be seen to symbolize the coming Kingdom of God, the Shining City on the Hill, the Messianic capital. It might further be related to the idea of the  (enclosed garden), a medieval Latin emblem of the Virgin Mary that gained prominence in Russian iconography as the Vertograd during the 1670s 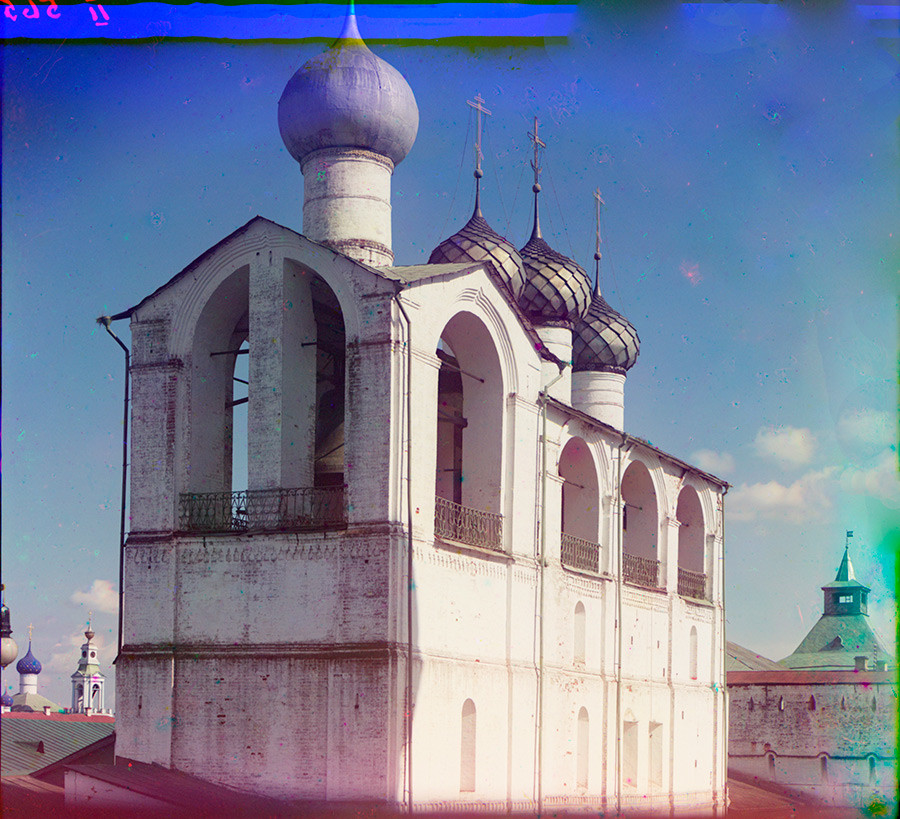 son of a country priest, Jonah Sysoevich rose through the monastic structure in Rostov, and in 1652 was appointed by his mentor, the newly elected Patriarch Nikon, to the Metropolitanate of Rostov. Although Jonah was temporarily in the tsar’s disfavor during the crisis surrounding Nikon’s downfall in the early 1660s, Jonah regained the sovereign's trust and proceeded to marshal the resources necessary for the building of his sacred precinct. 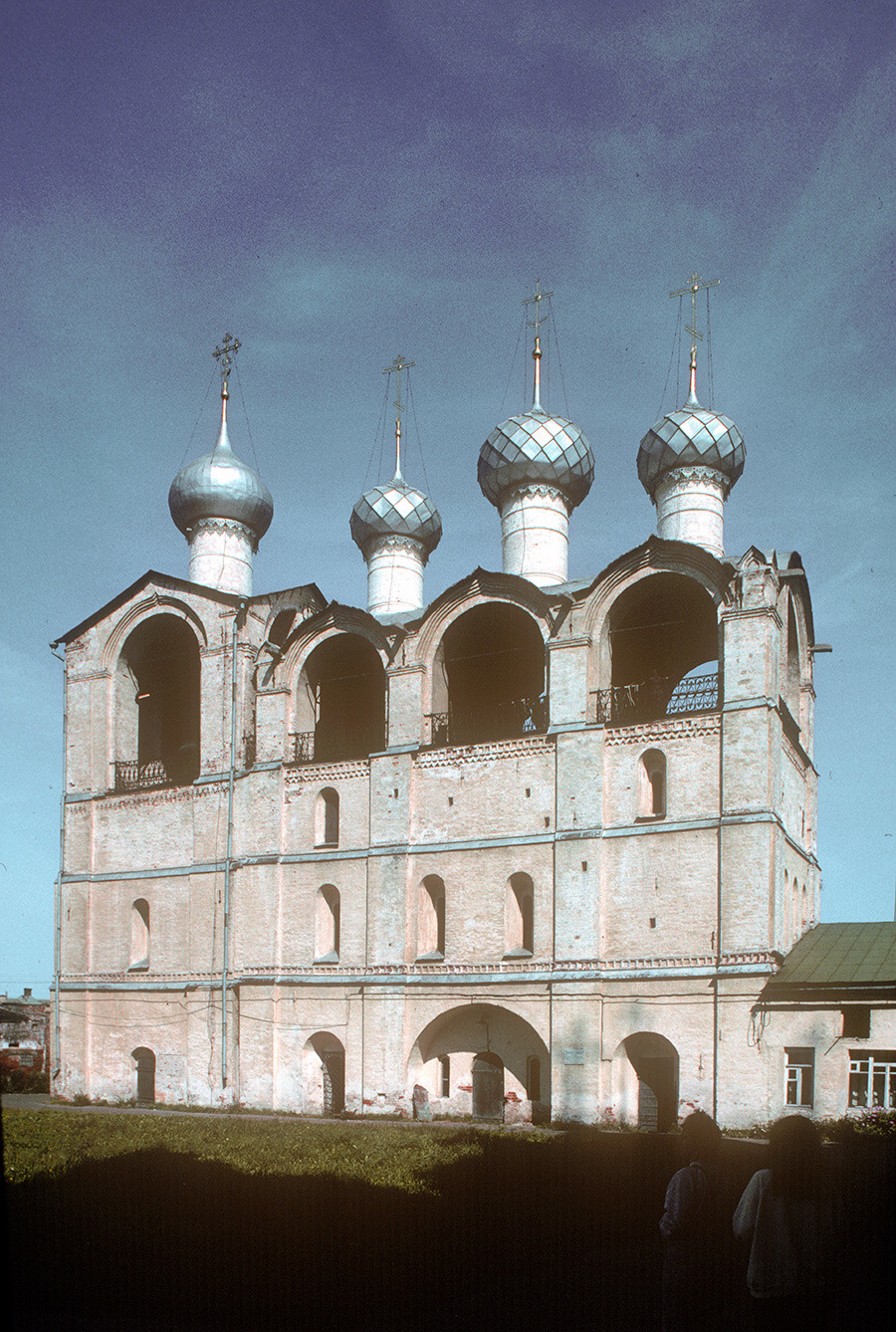 Jonah had at his command 16,000 serfs as well as the best craftsmen of his large and prosperous diocese. Within 20 years — from 1670 to 1690 — Jonah's masons erected not only several large churches and buildings for the Metropolitan's Court and but also a magnificent set of walls with towers and gate churches, situated on the north shore of Lake Nero.

The adjacent 16th-century Dormition Cathedral, built of brick and modeled after the Dormition Cathedral in the Moscow Kremlin, provided a fitting environment for the metropolitan's compound, to which it is visually linked by the belfry. Although usually dated to 1508-12, the cathedral is thought to have been enhanced in the late 1580s when the Rostov Metropolitanate was established. In the late 17th century, the low hemispherical cupolas were replaced by the magnificent flaring onion domes that match the style of the crowns of Jonah’s new churches, such as the nearby Church of the Resurrection over the North Gate 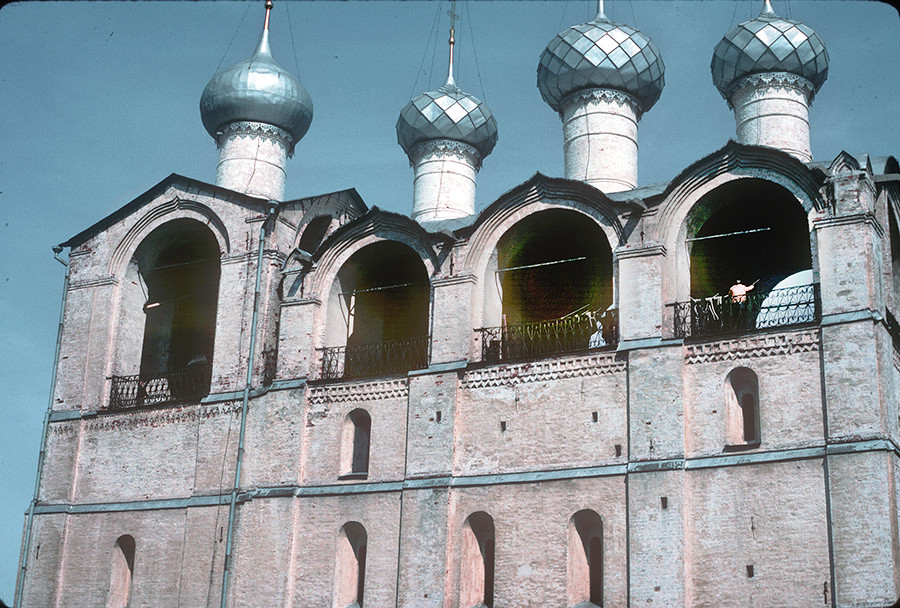 home for a 'swan'

The great belfry (), built in two stages between 1682 and 1689, supported a total of 13 bells. (Two small bells were added at the end of the 19th century.)  The main structure rose in four tiers to three arched openings for the original set of bells.

One of the two largest bells, cast in 1682 by the Moscow master Philipp Andreev and his son Gabriel, was named “Swan” (because of its melodious trumpet sound), and the other, “Polyeleos” (an Orthodox liturgical reference derived from the Greek for “most merciful”). “Polyeleos” weighed some 18 tons and was pitched to E, while “Swan” weighed 9 tons and was pitched to G. 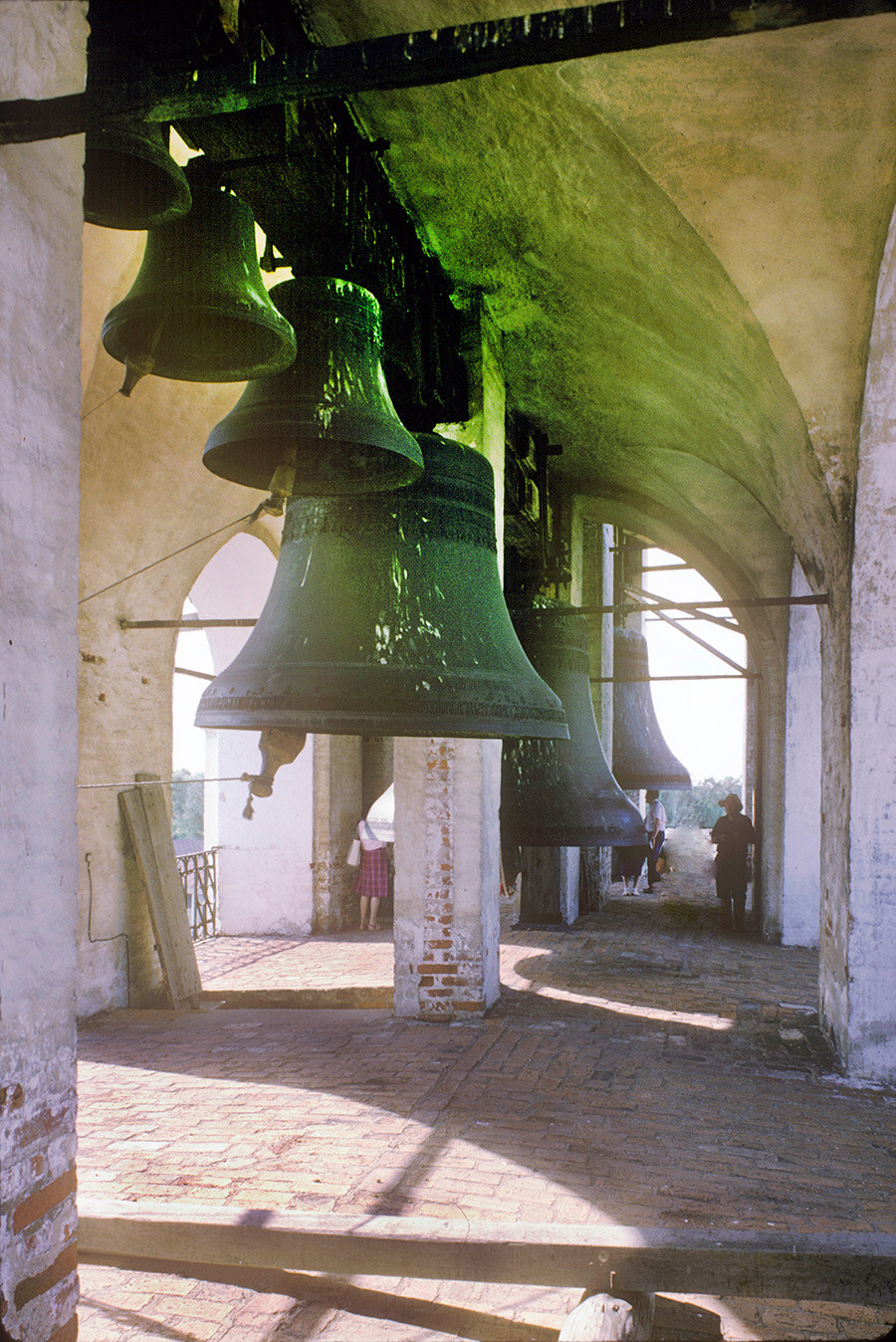 Together with the smaller bells, they rang in a minor key that apparently did not suit Metropolitan Jonah. He entrusted another master, Flor Terentyev from the Moscow Cannon Works, with the task of modifying the bell set to create a major key.

Terentyev resolved the challenge in 1688 by pouring an even larger bell, named “Sysoi” after the Metropolitan’s father. Weighing some 36 tons and tuned to C, the bell had a tongue that weighed 100 poods (about 3,600 pounds) with a swing of 1.4 seconds. Together the three largest bells formed a C-major chord. It is thought that the casting of the largest bells occurred in a pit to the south of the Dormition Cathedral, although the question has not been conclusively resolved.

To house the massive “Sysoi,” a slightly taller structure was attached to the north of the belfry. The resulting four open segments of the two belfry components were harmoniously linked in their proportions for propagation of the sound. Each segment is crowned with a drum, cupola cross. Most of the structure beneath the bell gables consisted of empty space, which created a sonorous resonating chamber. The bottom level contained a small church dedicated to the Entry of Christ into Jerusalem.

Yet even as Jonah’s grandiose project reached its culmination, developments were underway that would undermine the wealth of the Rostov Metropolitanate and threaten the very existence of the Metropolitan’s belfry. By the turn of the 18th century, the young Tsar Peter I, determined to transform Russia into a competitive European state, had requisitioned much monastic property and commanded the widespread melting of bells as a ready source of metal, especially for armaments.

Fortunately, the cathedral belfry was spared, but staggering sums were taken from the Metropolitanate for Peter’s state treasury during the 1690s, and the Rostov Metropolitanate rapidly waned in importance during the 18th century. Only the energetic efforts of local merchants in the late 19th century — and the subsequent patronage of Nicholas II — saved the Rostov from devastation 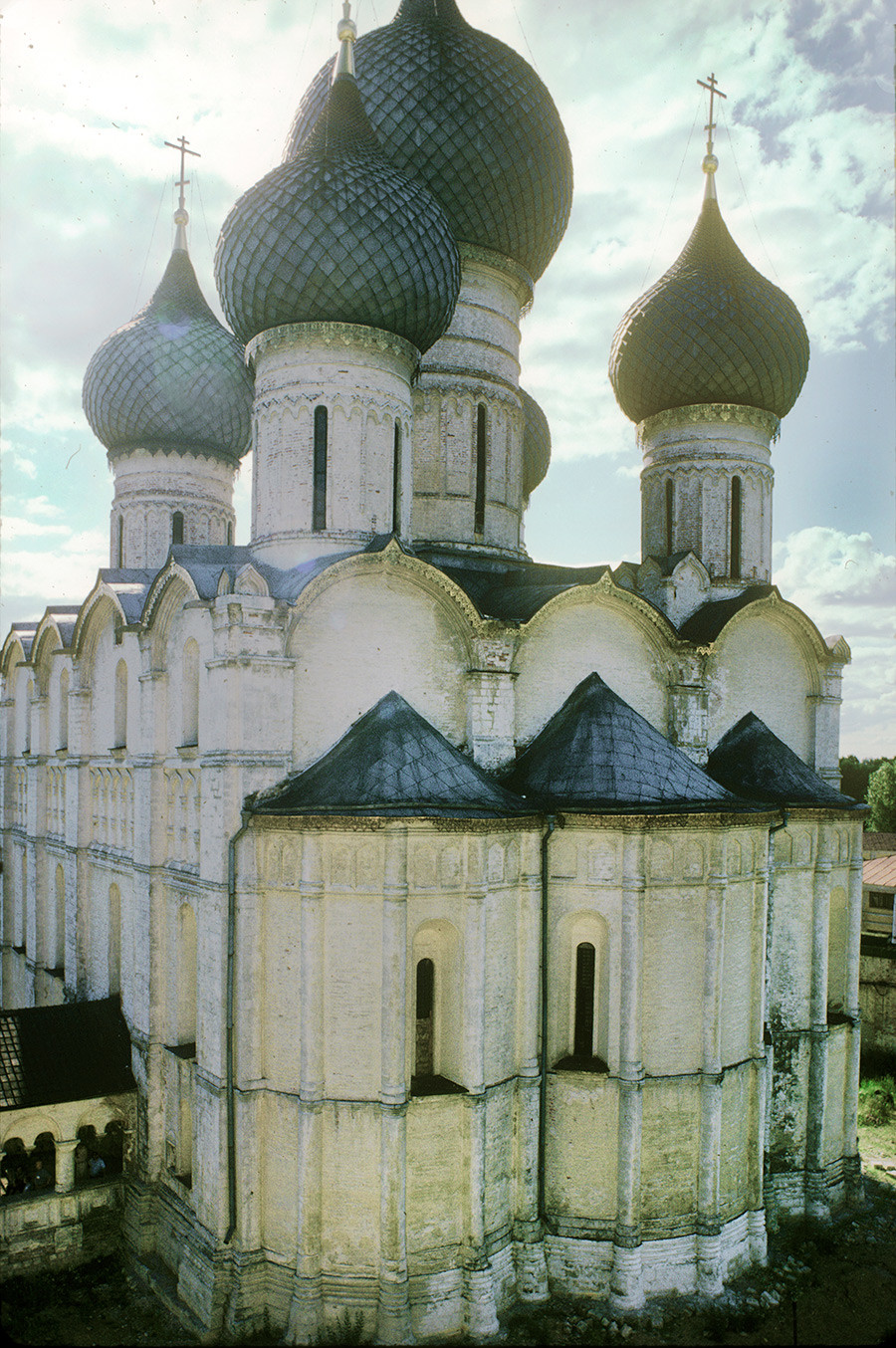 threat reappeared during the desperate years of the Russian Civil War following the Bolshevik Revolution. Calls to melt the bells for industrial needs were parried by the prompt appeal of a devoted museum director. In summer 1919, a delegation headed by Anatoly Lunacharsky, the influential Commissar of Culture, visited the site and decided to protect the belfry. But they remained in danger.

By 1928, bell ringing at the site was forbidden, and in 1930 the cathedral was closed. In August 1953, a devastating storm wreaked havoc, destroying most of the cupolas and roofs of the complex. Once again, dedicated specialists rallied, and the was restored under the of Vladimir Banige, a leading figure in historic preservation. At this time, the four-sloped roof visible in Prokudin-Gorsky’s general view was replaced with the original curved zakomara gable contours seen in my photographs 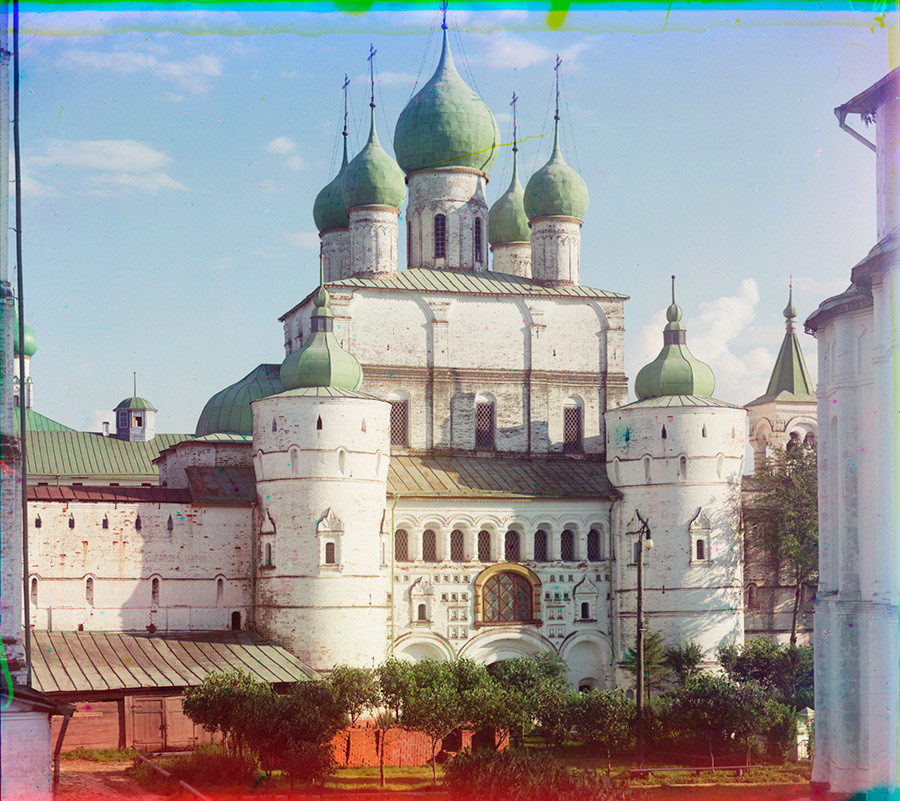 salvation of the Rostov kremlin and its monumental belfry was due in no small part to the interest of the Soviet film industry, which over the decades shot several films at the location. They include the wildly popular science fiction comedy Ivan Vasilevich Changes Profession (1973), still a perennial favorite among Russian viewers. And, starting in the 1960s, the Soviet recording company Melodiya began to issue recordings of the Rostov bells.

In 1991, the Dormition Cathedral was returned to the Orthodox Church, and the painstaking process of reviving the interior began. In 2004 restoration work began on the small Church of the Entry into Jerusalem in the belfry. The Rostov State Museum and the Orthodox Church continue to coexist in the ensemble.

In 2013, the Rostov kremlin was chosen one of the 10 visual symbols of Russia through a national public vote organized by the State Broadcasting Company. Despite the turbulence that might have destroyed the belfry, the bells are now rung periodically and can justifiably be considered one of the defining aural symbols of Russia 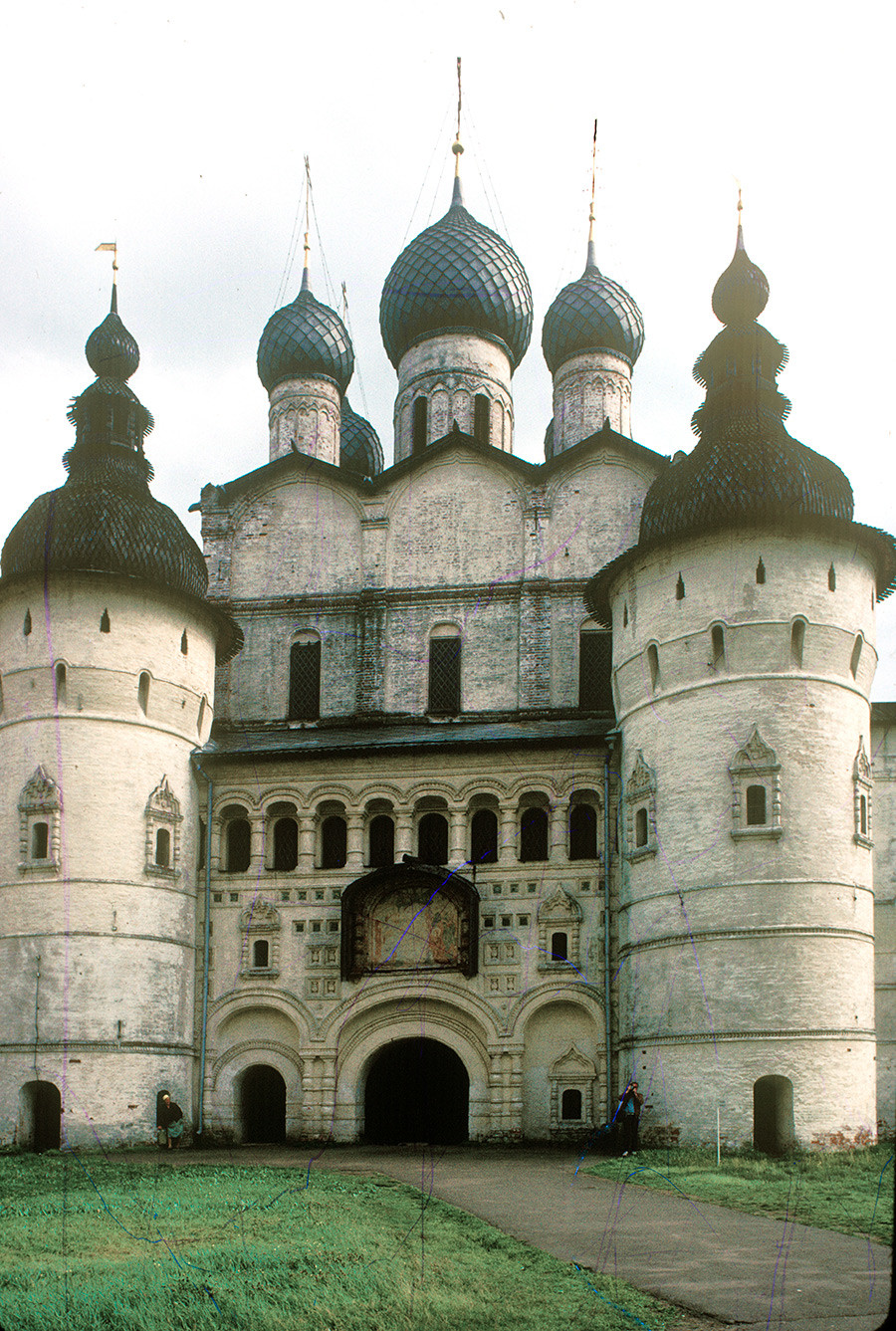