Travel
William Brumfield
The picturesque complex had an outsized role in Russian history. 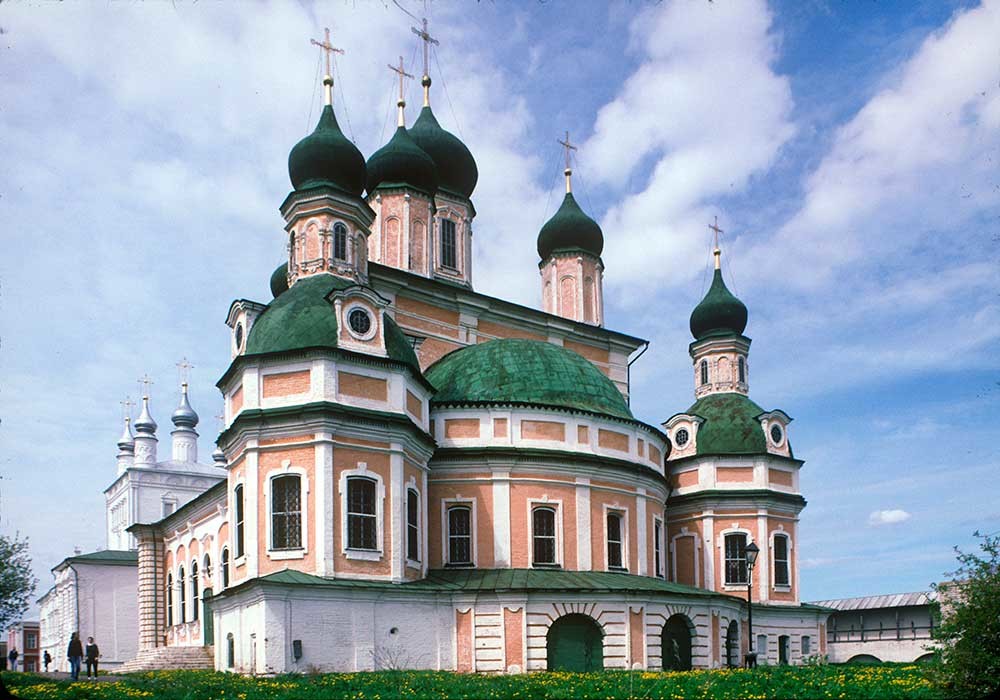 At the beginning of the 20th century, the Russian chemist and photographer Sergei Prokudin-Gorsky developed a complex process for color photography (see box text below). Inspired to use this new method to record the diversity of the Russian Empire, he undertook numerous journeys over a period from 1903 to 1916.

His vision of photography as a form of education and enlightenment was demonstrated with special clarity through his photographs of architecture in historic towns northeast of Moscow that form the heart of the Golden Ring. Prominent among them is Pereslavl-Zalessky (current population 40,000), which Prokudin-Gorsky visited in 1911. My work in Pereslavl-Zalessky has covered a period from 1980 to 2012 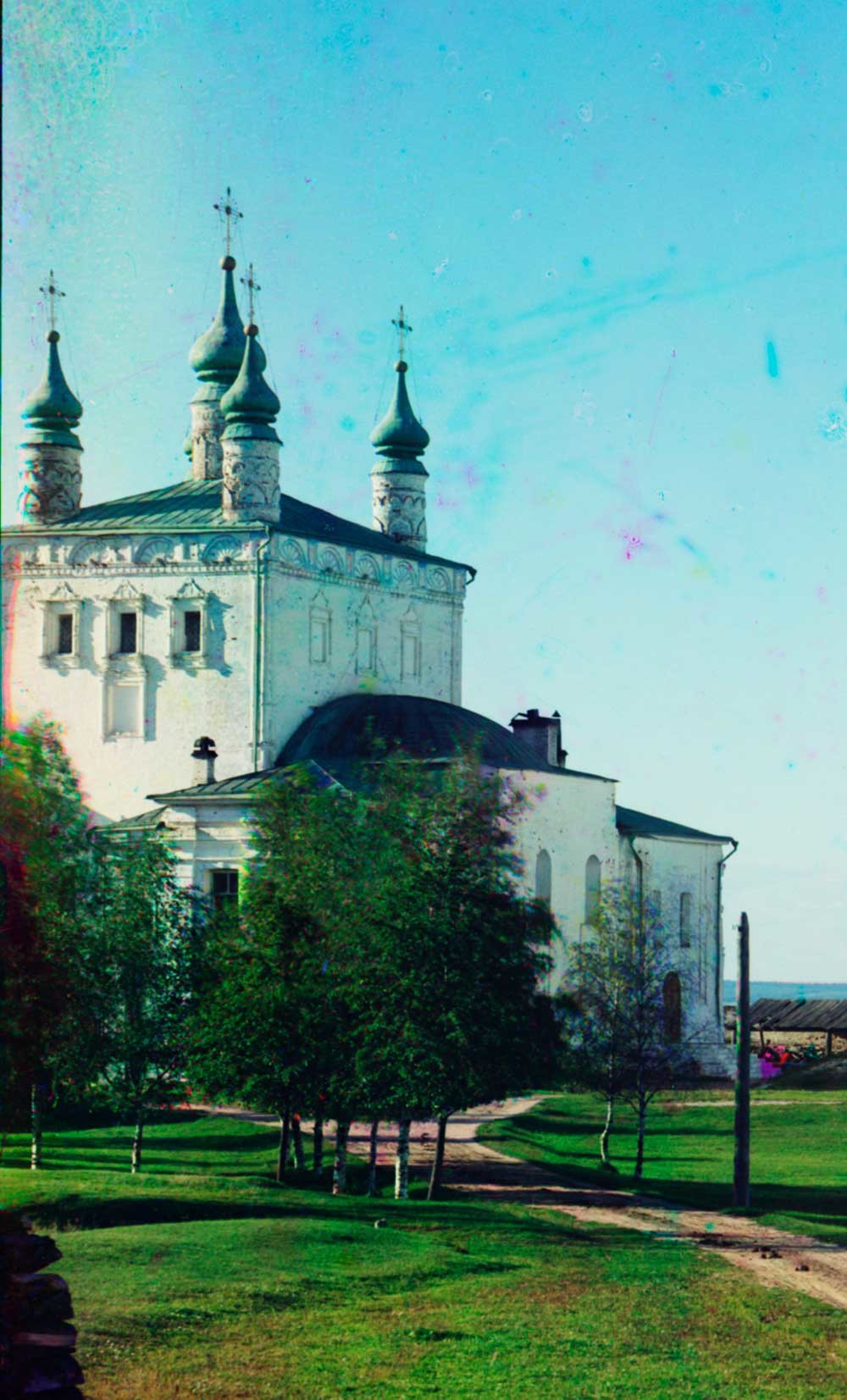 to official accounts, the town was founded in 1152 by Prince Yury Dolgoruky, who is also considered the founder of Moscow (1147). Settlers from the medieval capital of Kiev had been moving to the area since the turn of the 12th century, and the town’s name is thought to derive from the town of Pereyaslavl, near Kiev. The addition of “Zalessky” (“beyond the forests”) indicates that the new settlement lay within a fertile zone of fields and forest in central Russia.

Among the several monasteries that remain in this ancient town, the most picturesque is the Goritsky Dormition Monastery, situated on a bluff overlooking Lake Pleshcheevo. (“Goritsky” is related to a word for little hill.) Although relatively small, the lake played an outsized role in Russian history, including its use for sailing exercises by the young Peter the Great 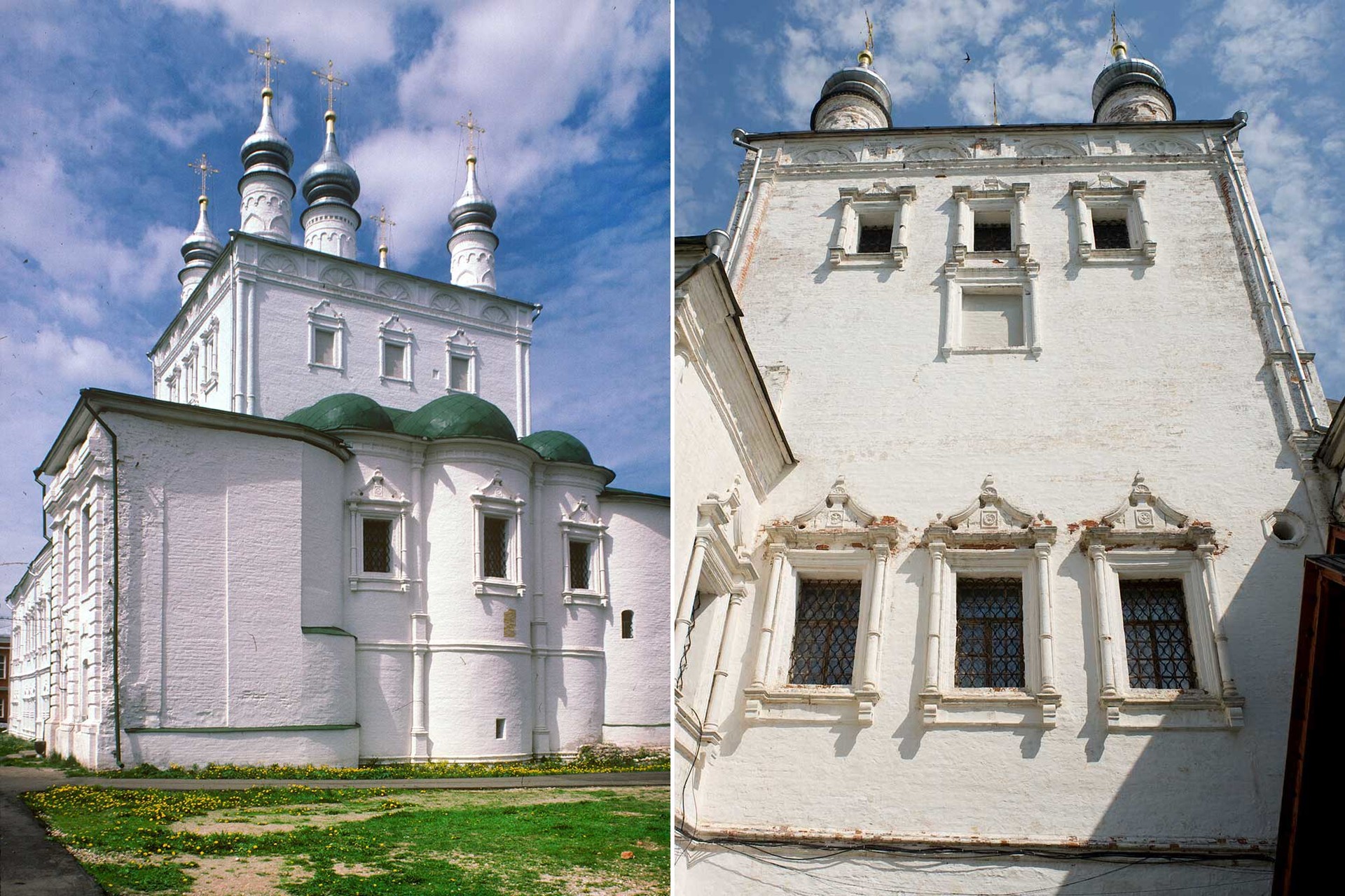 little is known about the monastery’s origins, it was functioning by the mid-14th century. One of Russia’s most revered monastics, St. Dmitry Prilutsky, was tonsured at the monastery, and rose rapidly in the hierarchy. He became acquainted with Sergius of Radonezh, avatar of Muscovite monasticism, during Sergius’s visit to Pereslavl in 1354.

St. Sergius had considerable influence as the spiritual adviser to Grand Prince Dmitry Ivanovich of Moscow (1350-89). The monk Dmitry assumed a similar role with the prince’s children. On the advice of Sergius, Dmitry left Pereslavl for the Vologda region, where in 1371 he founded the Savior Monastery, subsequently known as Savior- in this honor 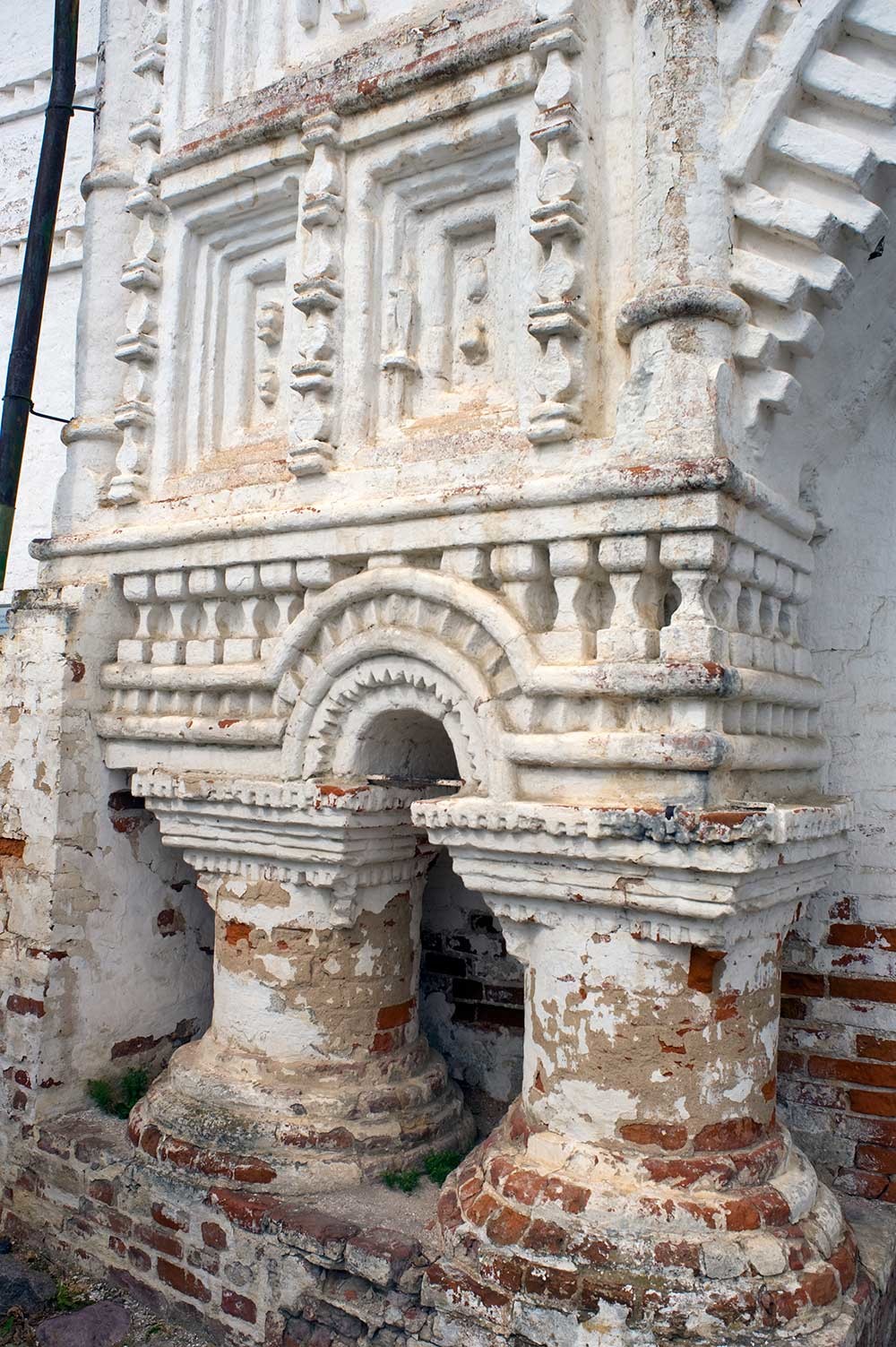 most dramatic moment in the history of the Goritsky Monastery occurred in when the town was sacked by Khan Tokhtamysh as part of a devastating Tatar attack on Moscow. Although one of Dmitry’s sons was taken , his wife, Eudoxia (Evdokia; 1353-1407), escaped during a pilgrimage to the Goritsky Monastery.

At that time, Goritsky Monastery consisted of log structures and could not offer serious resistance. Fortunately, Princess Eudoxia was able to descend to the lake shore with some of her . As they floated on a raft toward the middle of the lake, a dense fog settled and hid them from view until the Tatar raiders left the ruined monastery 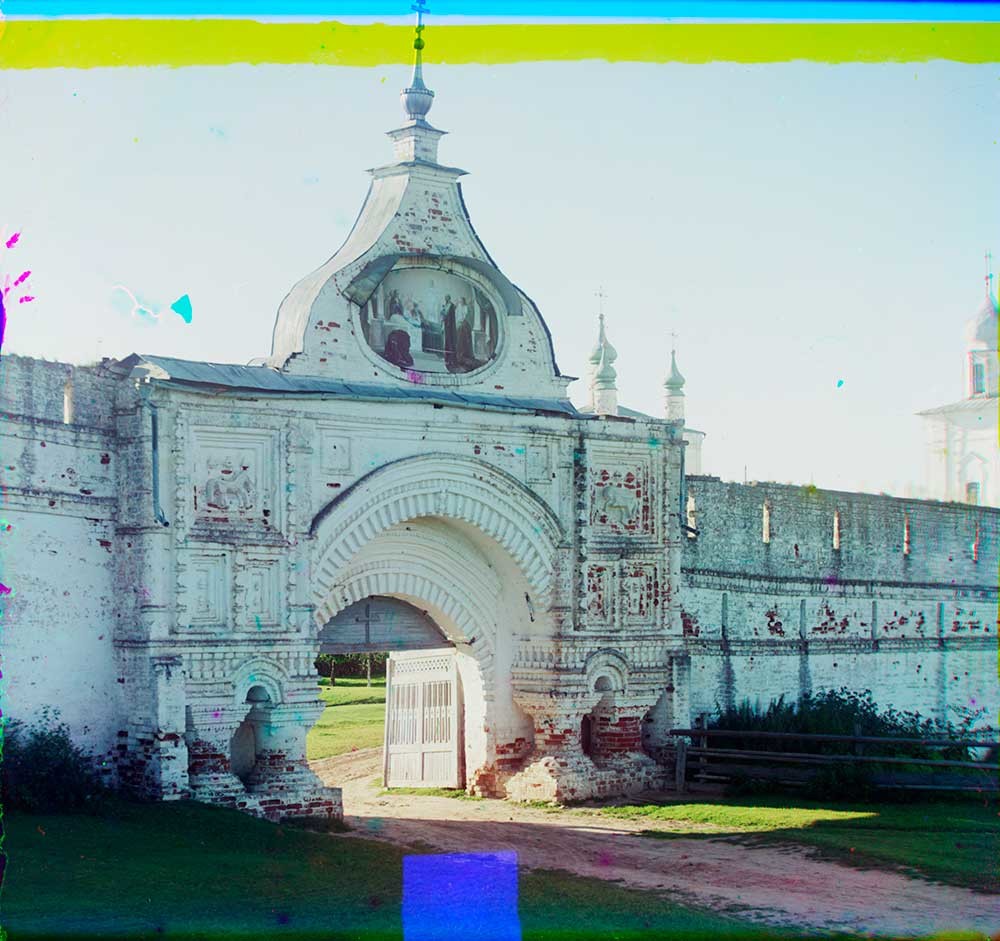 memory of her miraculous rescue, Eudoxia provided support to rebuild the monastery around 1392. She had become the de facto ruler of Muscovy after the death of Grand Prince Dmitry at the age of 38 in 1389. Eudoxia is revered for her wisdom and firm guidance during the early years of the reign of her son Vasily I (1371-1425).

In the 15th century, the Goritsky Monastery became an important spiritual center. Its most notable abbot (hegumen) toward the end of the century was Daniil, known for his charity to the poor and homeless. In the early 16th century, Daniil founded the nearby Trinity Monastery, patronized by Tsars Vasily III and Ivan IV (the Terrible). 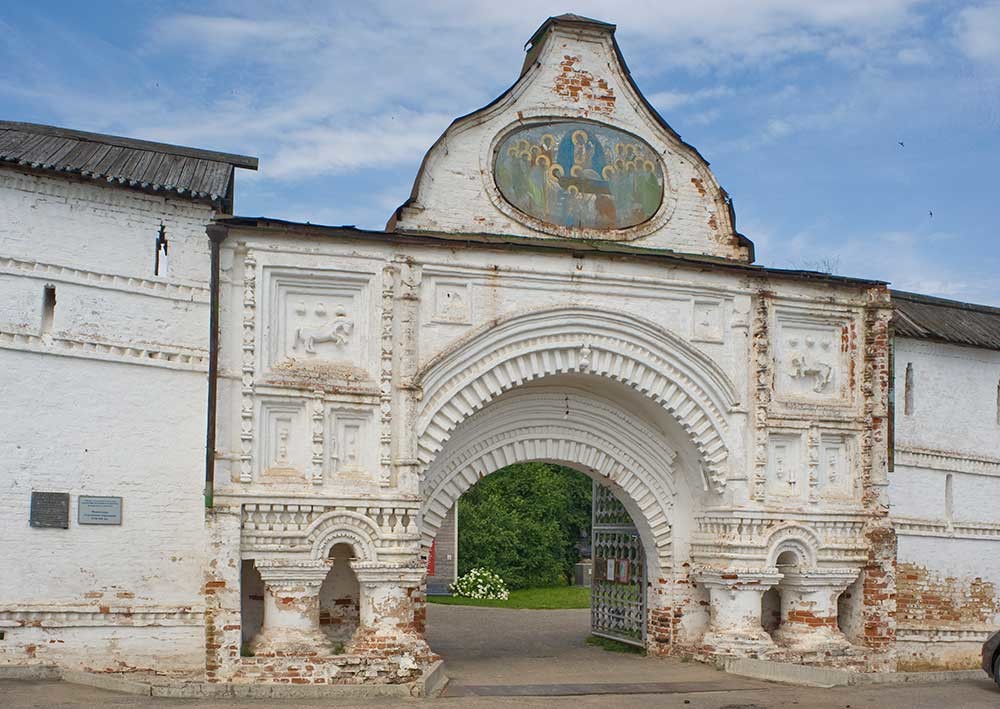 Over the course of the 17th century the Goritsky and other local monasteries were restored after the widespread destruction inflicted by the dynastic crisis known as the Time of Troubles. At Goritsky Monastery, the earliest surviving brick structures include the Church of All Saints, rebuilt in the late 17th century on the site of a smaller 16th-century church. It appears on the left in Prokudin-Gorsky’s view of the central ensemble. 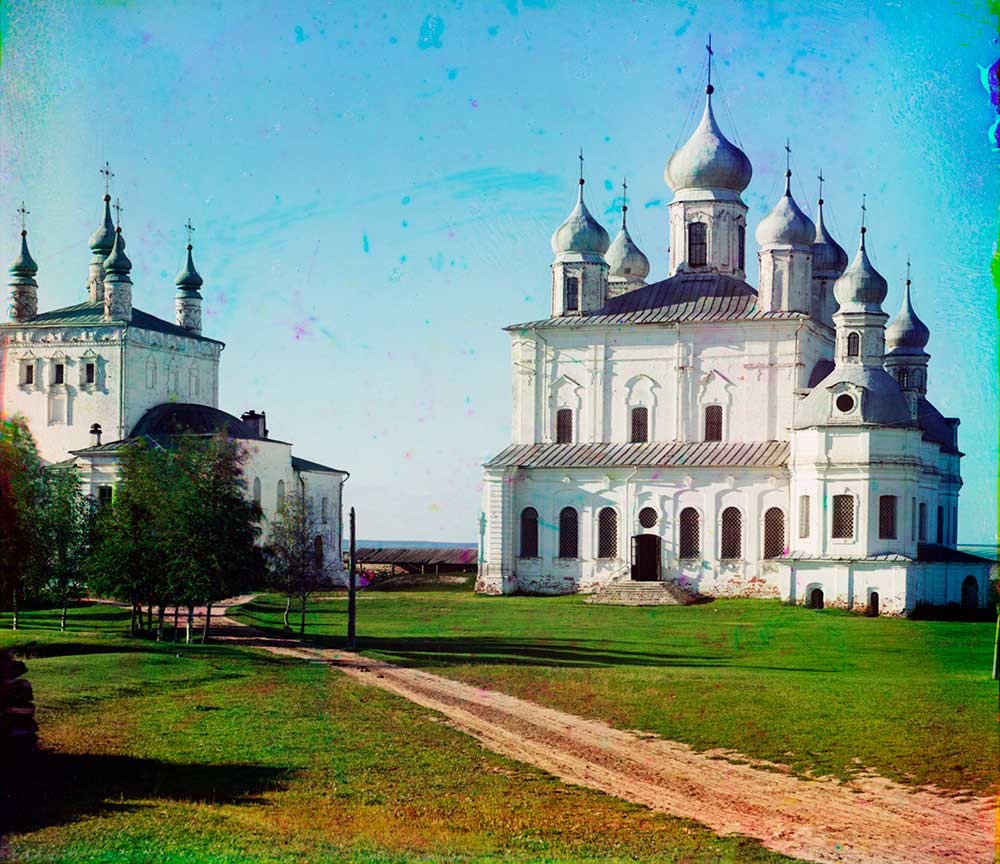 A distinctive part of the Goritsky Monastery is its walls, rebuilt in an imitation fortress style in the late 17th century. Near the southeast corner of the walls are two gate structures, fancifully decorated with molded brick patterns and figures. The main Holy Gate (on the south) supports the small church of St. Nicholas, completed at the end of the 17th century.

The East Gate is crowned with a pediment that contains a painting of the Dormition of the Virgin, to which the monastery is dedicated. Visible in Prokudin-Gorsky’s photograph, the image was effaced in the Soviet period but has now been repainted, as my 2012 photograph shows.

An ecclesiastical reorganization during the reign of Empress Elizabeth led to the creation of a wealthy Pereslavl diocese in 1744. Goritsky Monastery, which had been severely damaged by fire in 1722, was transformed into the residence of the archbishop, an elevated status that brought resources for a rebuilding of its churches. 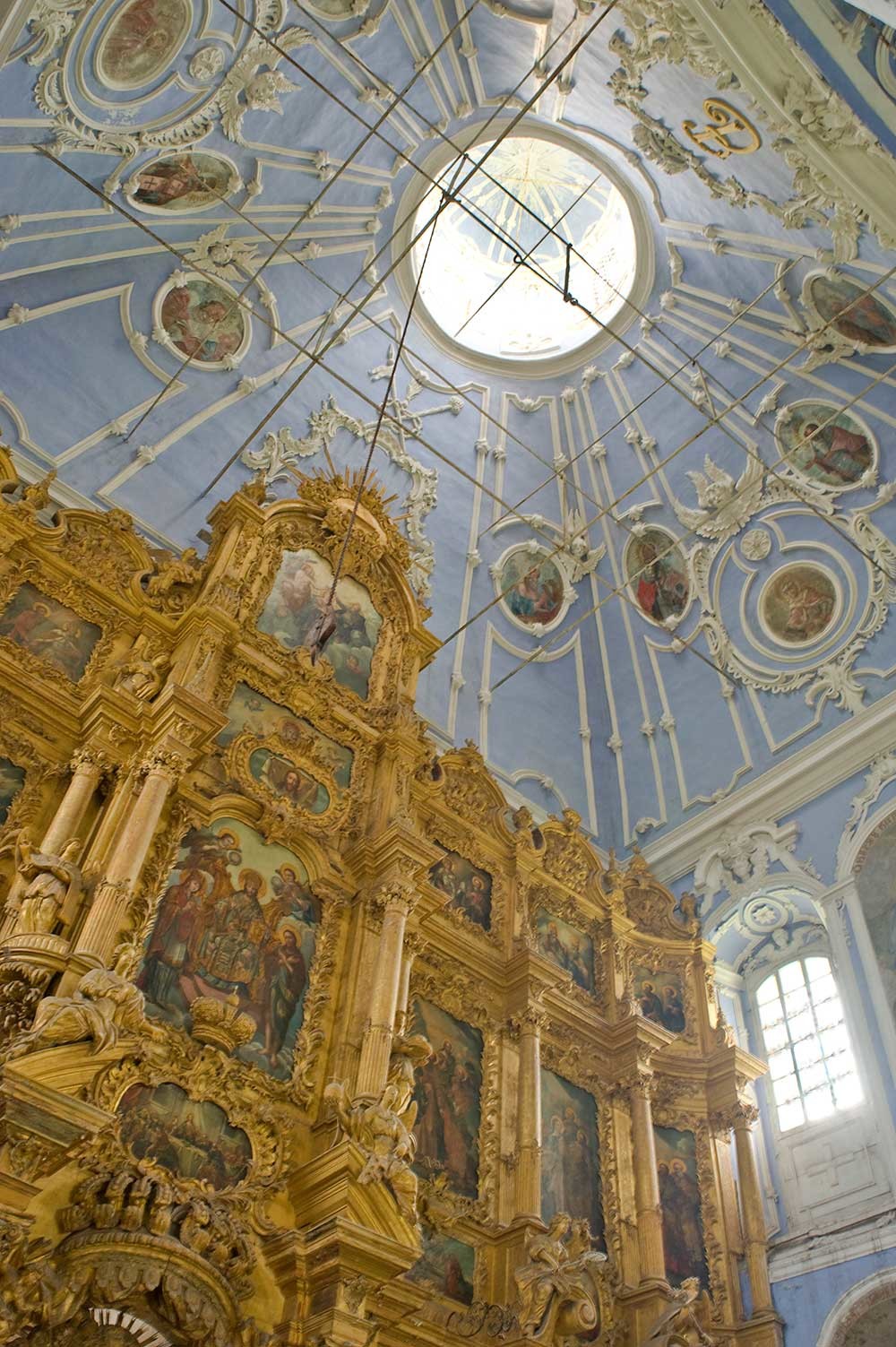 The building campaign was guided by Ambrose Zertis-Kamensky, who served as archbishop from 1753 to 1761. A well-educated cleric, he intended to expand Goritsky Monastery in a magnificent Baroque style. The most imposing result is the Cathedral of the Dormition of the Virgin, begun in the early 1750s and completed in 1761 to replace a church built in the 1520s. On the exterior, its design shows a simplified mixture of Baroque and neoclassical elements. 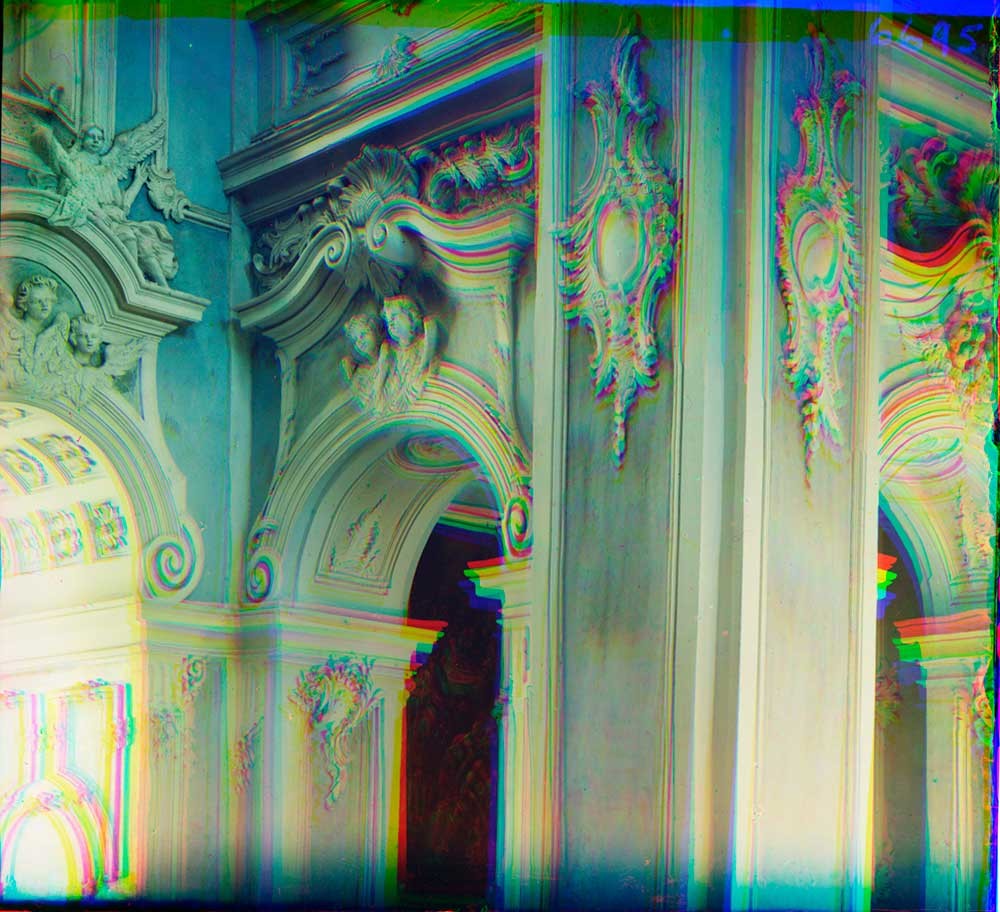 On the interior, however, the cathedral displays a lavish late Baroque decorative style. The magnificent icon screen is of special note, yet Prokudin-Gorsky photographed only a detail of this main space. Because of the drop mechanism of his three-exposure process, the large camera had to remain on a level surface and could not be tilted to capture the upper reaches of church interiors. He was, however, able to take an exquisite photograph of the icon screen in the south chapel.

During the reign of Catherine the Great, capricious fate brought a halt to plans for expanding Goritsky Monastery. In 1788, the Pereslavl diocese fell in status through another ecclesiastical reorganization, and what remained of the Baroque ensemble was gradually despoiled during the 19th century 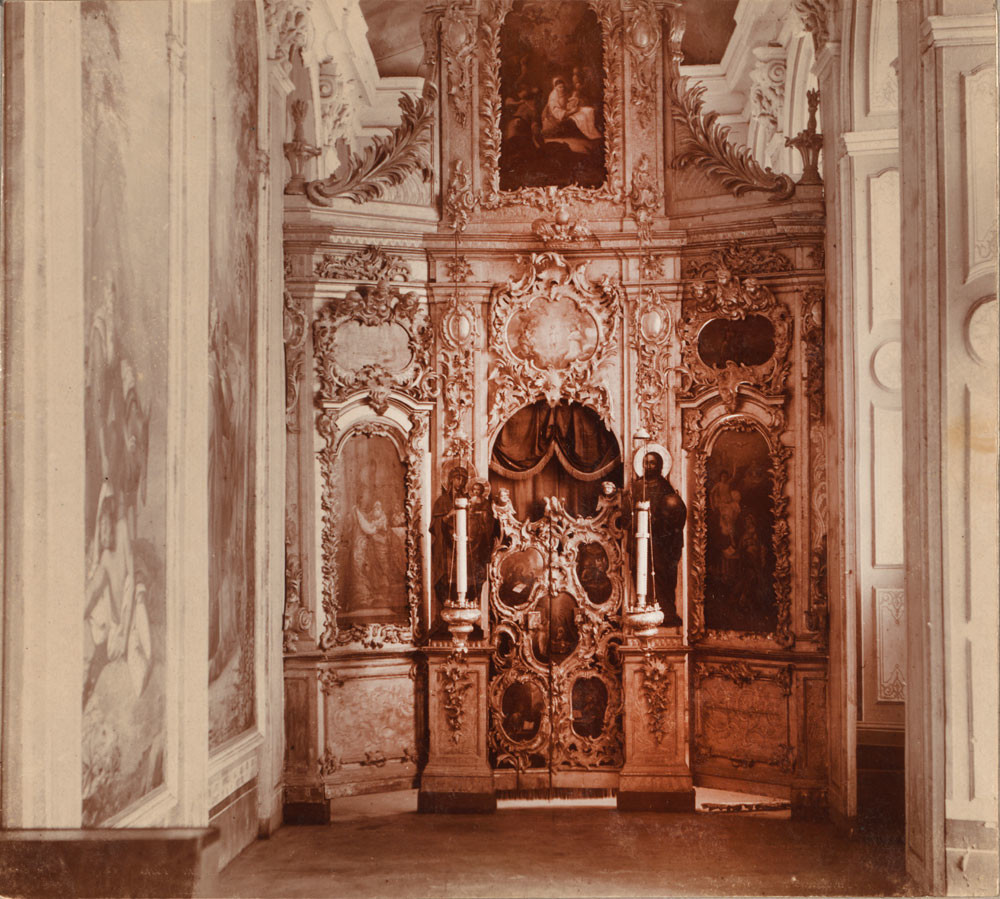 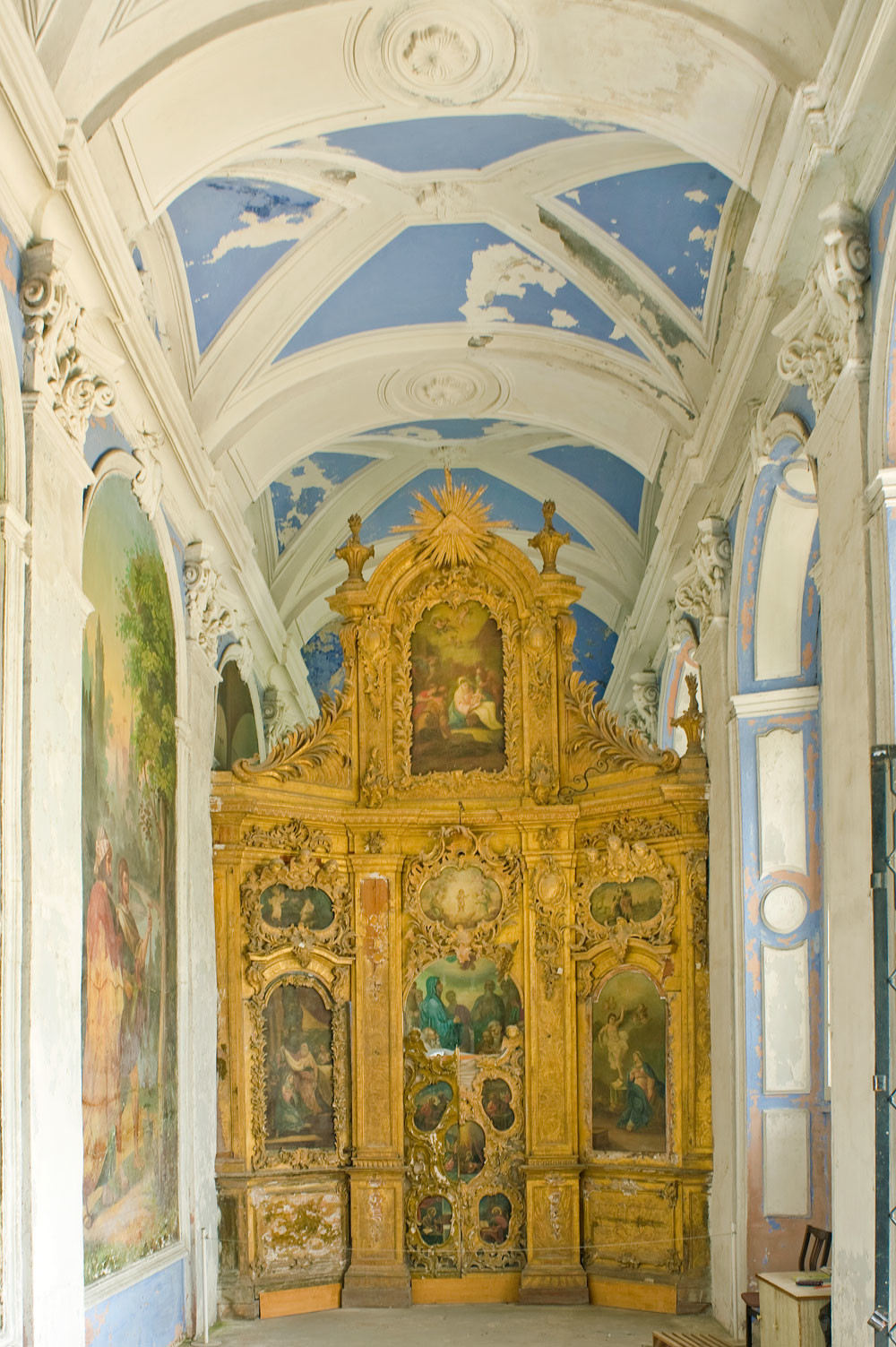 , the imposition of Soviet power stemmed the decline of the former Goritsky Monastery at a time when most monasteries were being ransacked. In 1919, the site was made available for use as a local history museum, which preserved the site. In the 1960s, the preservationist Ivan Purishchev launched a campaign that succeeded in restoring much of the ensemble despite limited means. Due to these valiant efforts, Goritsky Monastery has survived as one of the area’s most appealing architectural landmarks.