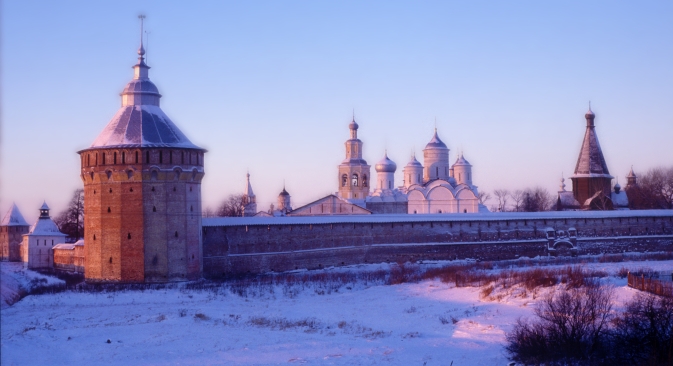 Once a bulwark of the Muscovite state in the Russian North, today the Savior Prilutsky Monastery is both a historical site and center of worship.

The 14th century was critical in many ways for the formation of the Muscovite state that would become the center of Russia.

One of the most important accomplishments was the development of monastic institutions that not only elevated the propagation of the faith and the quest for a spiritual life but also advanced the interests of the Moscow principality as the primary defender of Russian Orthodoxy. In 1325 the head of the Church, Metropolitan Peter, transferred his residence from Vladimir to Moscow, a move that greatly strengthened the political and spiritual leadership of Moscow.

Hovering over one of the most remarkable Russian churches

These monasteries were especially important in the sparsely settled Russian North. Among the earliest of the northern monastic foundations was the Savior-Prilutsky (Spaso-Prilutsky) Monastery, picturesquely situated near a bend in the Vologda River to the north of the town of Vologda. It was established presumably in the early 1370s by the venerable Dmitry Prilutsky, who was one of the most active proponents of Orthodoxy in the north.

Prilutsky’s childhood and youth were closely linked with the town of Pereslavl-Zalessky, where he became a monk at the Goritsky Dormition Monastery. During the 1350s he was closely associated both with Sergius of Radonezh and Moscow’s grand prince Dmitry Ivanovich (Donskoi).

Sensing the call to create his own spiritual retreat, Dmitry was advised by Sergius to go to the northern forests, together with the monk Pahomy, and undertake the arduous work of creating a monastic outpost.

This effort apparently had the support prince Dmitrii Ivanovich as one of the early bulwarks of Orthodox Moscow in the northern territory around Vologda.The Prilutsky Monastery was also favored by grand prince Vasily III, who visited it on a pilgrimage with his wife Elena Glinskaia in 1528.

The monastery's original buildings were of logs, including the main church, dedicated to the Procession of the Precious Wood of the Life-giving Cross of the Lord. After its destruction by fire, the Savior Cathedral, as the church is known, was rebuilt in brick during 1537-1542 with substantial support from Moscow.

In 1541 the young grand prince Ivan IV (later known as Ivan the Terrible) issued a decree that released the monastery from all taxes for a period of five years. Ivan first visited the monastery in 1545, and it remained under his attention thereafter.

As a result of princely favor, the Savior Cathedral at the Prilutsky Monastery became the earliest large masonry structure in Vologda. Similar in design to other provincial churches that imitated Moscow’s cathedrals, the Savior Cathedral also has distinctive features that link it to late 15th-century northern churches such as the Dormition Cathedral (1497) at the St. Kirill-Belozersk Monastery and the Nativity fo the Virgin (1490) at Ferapontov Monastery.

The Savior Cathedral is elevated on a high base, which contained a separate church primarily for winter use primarily. This lower church has five altars, whose dedications include St. Dmitry and St. Sergius. The exterior walls rise to two rows of curved gables (zakomary) that are both structural and decorative. The structure is crowned with an ensemble of five drums and cupolas that provide a harmonious vertical accent.

The interior of the Savior Cathedral, whose whitewashed walls were never painted with frescoes, possesses an austere monumentality. Four large piers ascend to the corbelled vaults that support the cupola drums. The interior now has a new iconostasis of impressive size and scale. Its altar dedications include the Procession of the Cross and the Transfiguration of the Savior.

A raised gallery envelopes the cathedral and leads at the southeast corner to the monastery refectory and the Church of the Presentation, built in the late 1540s. The church is crowned with a pyramid of decorative gables and a single cupola. The central monastic ensemble is completed by a bell tower, rebuilt in 1729-30 on a 17th-century base.

On the north side of the monastery is the Gate Church of the Ascension, built in 1584-90 and originally dedicated to St. Theodore Stratilates, the patron of Tsar Fyodor, who ruled from 1584 to 1598.

With Fyodor’s death the Riurikovich dynasty came to an end and the subsequent period of unrest is known as the Time of Troubles. During this period the Savior-Prilutsky Monastery suffered greatly. In 1612, it was sacked by Polish forces and rogue Cossacks. Further raids occurred in 1615 and 1619.

With these memories in mind, the Prilutsky Monastery received state funds to build massive brick walls and five towers, completed in 1656. In the 18th and 19th centuries other churches, cloisters and an infirmary were built within the monastery walls.

In 1924 the Savior Prilutsky Monastery was closed as a result of the general campaign against religion. During the 1930s, the monastic grounds became a crowded detention center for peasants dispossessed during the collectivization of agriculture and shipped to harsh “resettlement” in the north. Following the death of Stalin in 1953, the monastic ensemble was gradually restored as a cultural and historical monument.

In 1979 it became a part of the Vologda State Museum.

The monastery gained a stunning addition in 1962 with the reconstruction of the ancient log Church of the Dormition from the long-abandoned Alexander Kushtsky Monastery, located near Kubenskoe Lake in Vologda Province. Although manuscript references lead some to state that the structure dates from 1519, other specialists assume that its existing form was frequently rebuilt and more probably dates from the late 17th century.

In 1990-91 the Savior-Prilutsky Monastery was returned to the Orthodox Church, which carefully maintains the historic buildings. The monastery now plays an active role in the spiritual life of the Vologda region, even as it remains one of the great cultural and architectural treasures of the Russian North.