The town that preserves the art of glass 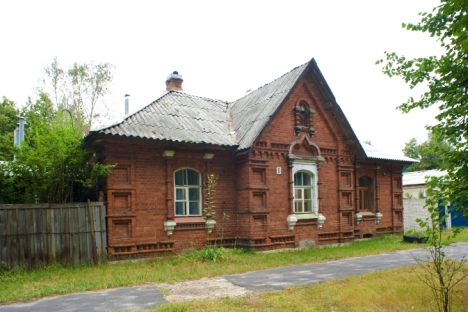 The Vladimir Region to the northeast of Moscow is among the richest in Russia in terms of cultural and artistic heritage, from Murom to the east on the Oka River to Gorokhovets and Viazniki on the Kliazma River, not to mention Suzdal and Vladimir itself.

Each of the towns in the Vladimir Region has an abundance of architectural monuments from several centuries. Often overlooked in this wealth, however, is the town with the curious name of Goos (pronounced “goose”) Khrustalny, located on the small Goos River, a left tributary of the Oka. Although there are competing claims for the original derivation of the word, the town’s name is generally understood as “Crystal Goose”—appropriate in view of its role as a center of glass production in Russia from the middle of the 18th century.

Located some 35 miles south of the regional center of Vladimir, the settlement was first mentioned simply as “Goos” in documents from the 17th century. By the middle of the 18th century, Goos came into the possession of the Maltsov merchant dynasty, considered the leading Russian producers of glass. In 1756, Akim Maltsov opened a glass factory at the village with assets transferred from his father’s holdings in the Mozhaisk region.

The enterprise rapidly grew, and the Goos River was dammed to create the essential factory pond. Expanded in the 1850s, the pond exists to this day at the center of the town park. In reward for his services to Russian commerce, Akim Maltsov was granted nobility status in 1775, which in turn enhanced his ability to acquire property and serfs for the factory workforce.

For almost six decades in the 19th century, the Goos factory belonged to Akim’s grandson, Ivan Maltsov, who not only introduced innovations such as Bohemian style glass products, but also began textile production as employment for the growing number of women in the factory settlement.

A decisive moment in the development of the town occurred following Ivan Maltsov’s visit to French glassworks in 1838. There he noted effective ways in which workers’ housing and services were grouped around the factory complex. This provided the basis for the model factory town that flourished after 1880 under the direction of the new owner, Maltsov’s nephew Yury Nechaev-Maltsov.

During the late 19th century the town also witnessed rapid expansion of the textile factory, whose imposing brick buildings are still the most visible factory presence in town. (The buildings of the glass factory, in contrast, are less noticeable.)

In the late 20th century the town’s factories—and particularly the glassworks—endured a period of decline and severe economic crisis that resulted in the loss of much of the skilled workforce, including master artists. Currently, the regional administration has sponsored attempts to attract new investors, but the process of revival will be long and complicated.

Fortunately, many of the town’s buildings, including brick factory cottages, have been well preserved. And the center of Goos Khrustalny is quite appealing, with its small squares and rebuilt 19th-century Trading Center. Near the town center is the main parish Church of Sts. Joachim and Anna, originally built as a neoclassical rotunda in 1816 and expanded over the next several decades.

Damaged during the church’s use as a workshop during the Soviet era, the interior and its vibrant wall paintings from the turn of the 20th century are now being carefully restored.

Late 19th-century church architecture is handsomely represented by the large Chapel of Saint Barbara, with its profusely ornate architectural detail and an attractive park setting, but the main architectural landmark is the monumental Church of St. George, built in 1892-1904 to a design by the prominent Petersburg architect Leonty Benois.

In 1926, the church was converted to a factory club and its cupolas and bell tower removed. Despite these losses, however, the superbly constructed basic structure was preserved and in 1973-1983, the interior was restored as part of the conversion of the building to a museum of artistic crystal—a function that it serves to this day.

The appearance of the Church of St. George, with its basilical plan, elongated nave and romanesque details, is unusual by traditional Orthodox standards. But the interior and its remarkable surviving art is beautifully served by the extended open space, marked by Romanesque style columns of polished labradorite from the Zhitomir area.

The main artist was the renowned Viktor Vasnetsov (1848-1926), one of the most popular of Russian painters. For the main altar space in the east, he designed a magnificent mosaic (made by the Petersburg firm of A. N. Frolov) portraying the Assembly of Mary Mother of God in a composition known by the name of a hymn to the Virgin, “In Thee Rejoiceth.”

Unfortunately, the icon screens created by Vasnetsov were destroyed during the Soviet period. Back toward the west, however, there is a no-less-spectacular work of art, Viktor Vasnetsov’s vast canvas depicting the Last Judgment, portrayed in the manner of 17th-century frescoes such as the St. Sophia Cathedral in Vologda.

In this painting, those who have been found worthy of salvation are on right hand of the enthroned Savior, while the damned are on left, with a resurrected soul being weighed in the center. The righteous are dressed in traditional Russian clothing (partly justified by the presence of medieval saints among them), but the damned are luridly portrayed as writhing, naked bodies in the grip of wanton passions and evil deeds. Their faces often have a contemporary urban character, particularly noticeable in the hair styles.

This extraordinary work of art raises many questions deserving more extensive discussion. Removed when the church was converted into a club, this bold painting miraculously survived—perhaps in deference to Vasnetsov’s prestige among the Soviet elite. With the restoration of the structure as a glass museum, Vasnetsov’s “Last Judgment” was returned to its original space on the west wall. There it rests in all its glory within the Museum of Artistic Crystal. That alone justifies a trip to the enchanting town of Crystal Goose.