Moscow is a monster: Here's what it takes to sustain this mega-city for just 1 day

Travel
Nikolay Shevchenko
Muscovites could easily drink the entire Lincoln Memorial Pool in a day, and they spend so much money on gasoline every day that they could buy Paradise Island in the Bahamas! 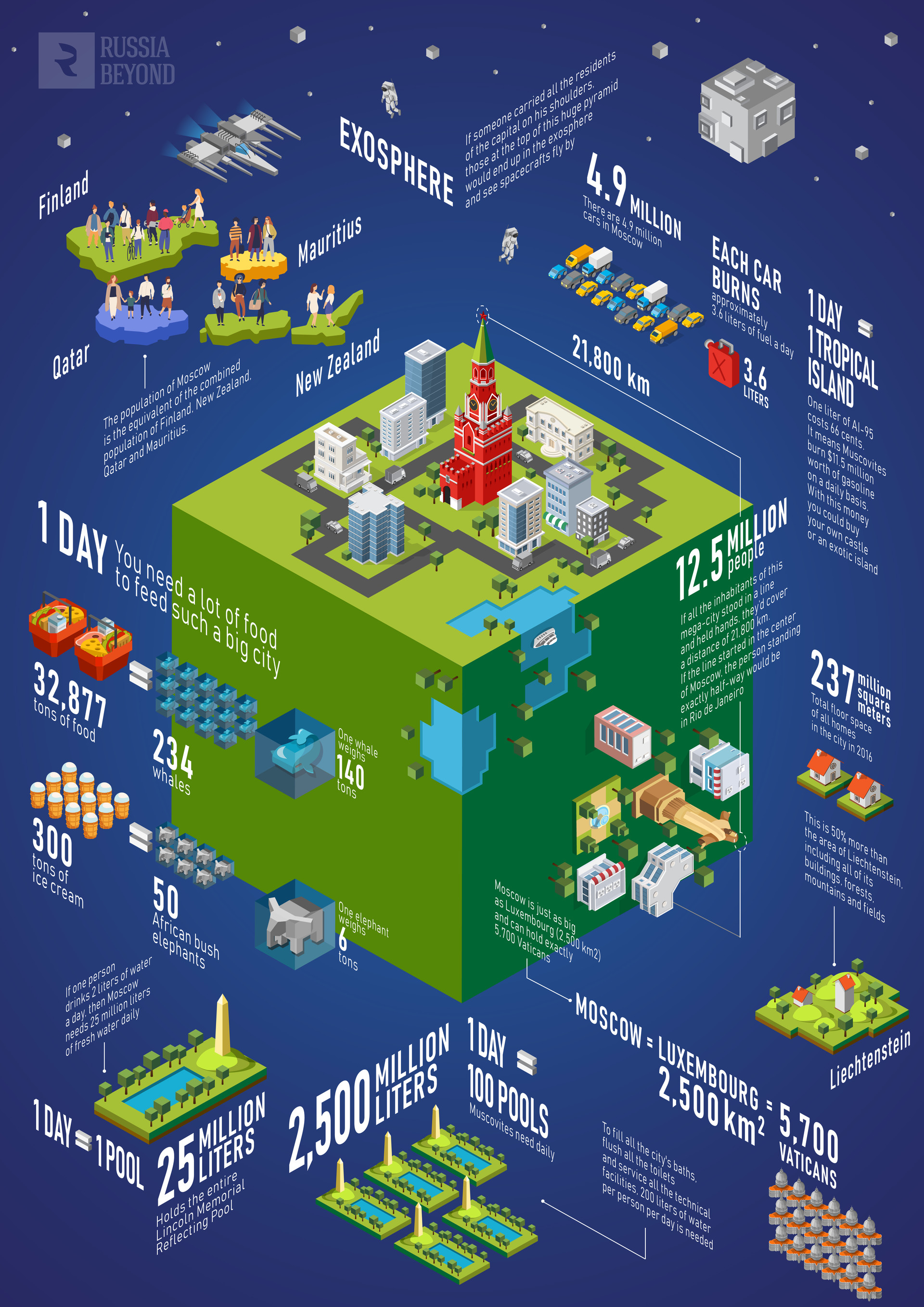 1. 12.5 million people live in Moscow. If all of them stood in a line and held hands, they’d cover a distance of 21,800 km (just over half the length of the equator!). If the line started in the center of Moscow, the person standing exactly half-way would end up in Rio de Janeiro, which is 11,000 km from Moscow. 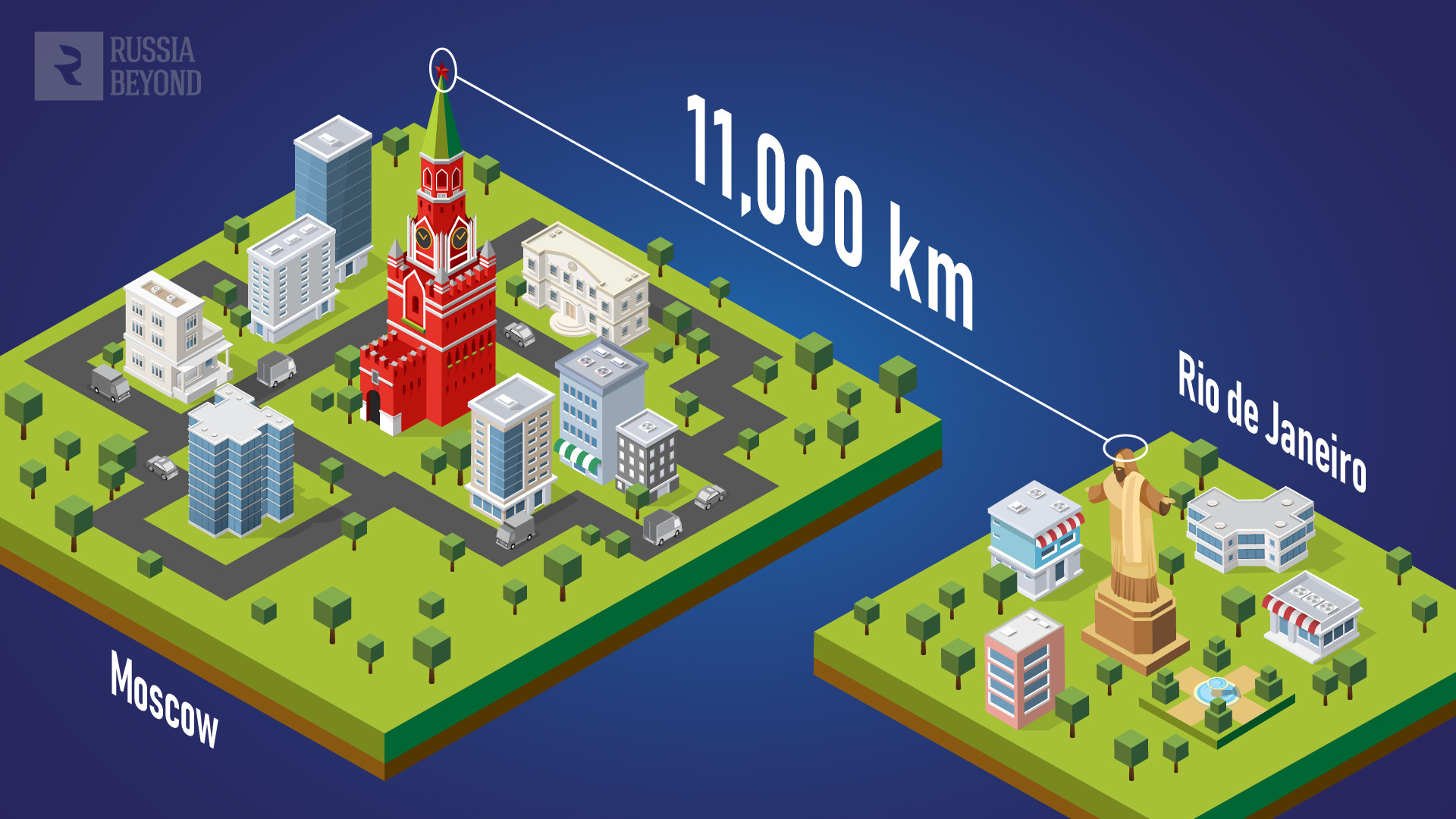 2. The average Muscovite is 175 cm tall, so if someone could carry all of the city’s residents on his shoulders, those at the top of this huge pyramid (21,000 km high) would end up in the exosphere and see spacecraft fly by (providing they’re wearing a spacesuit). 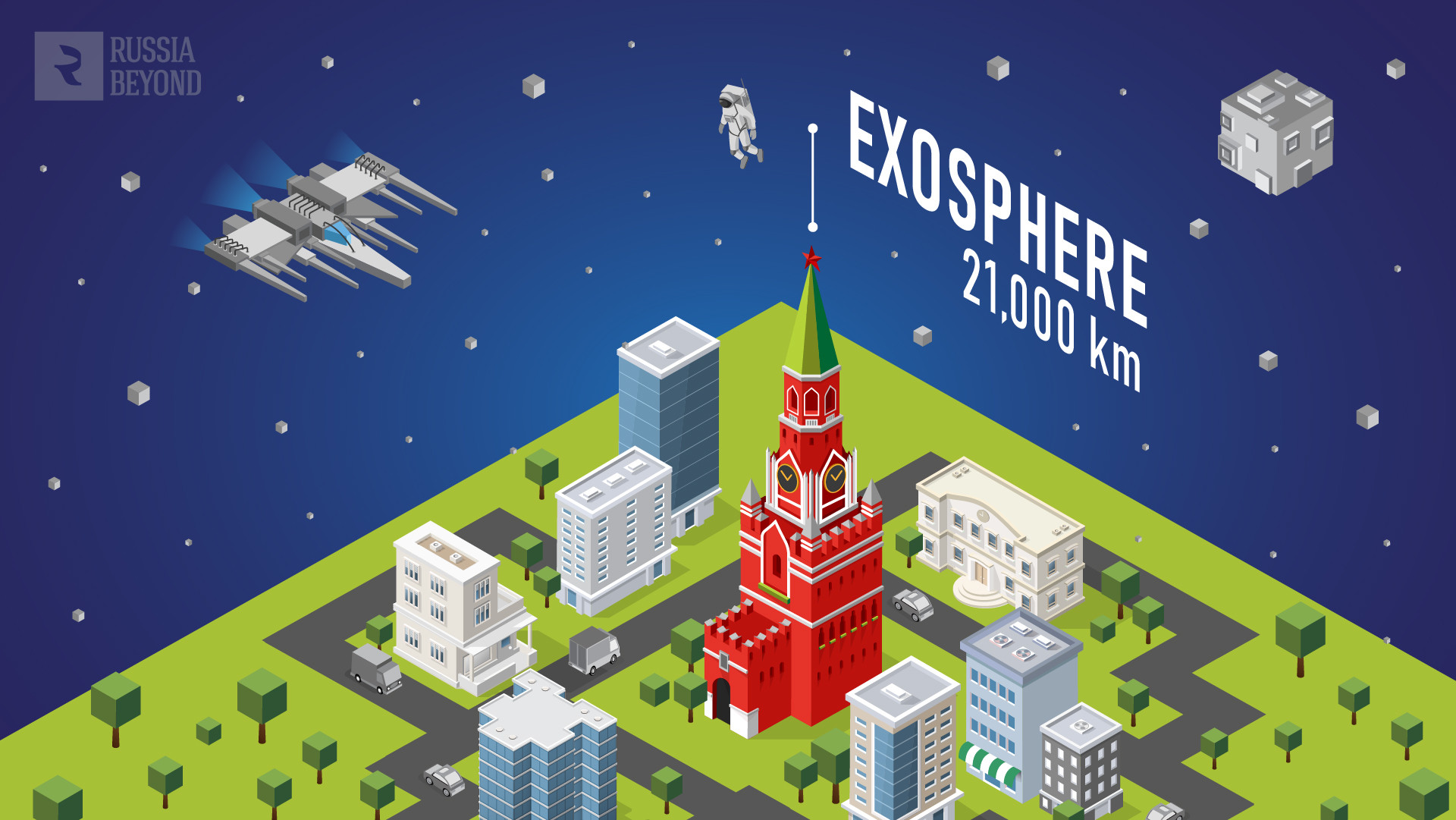 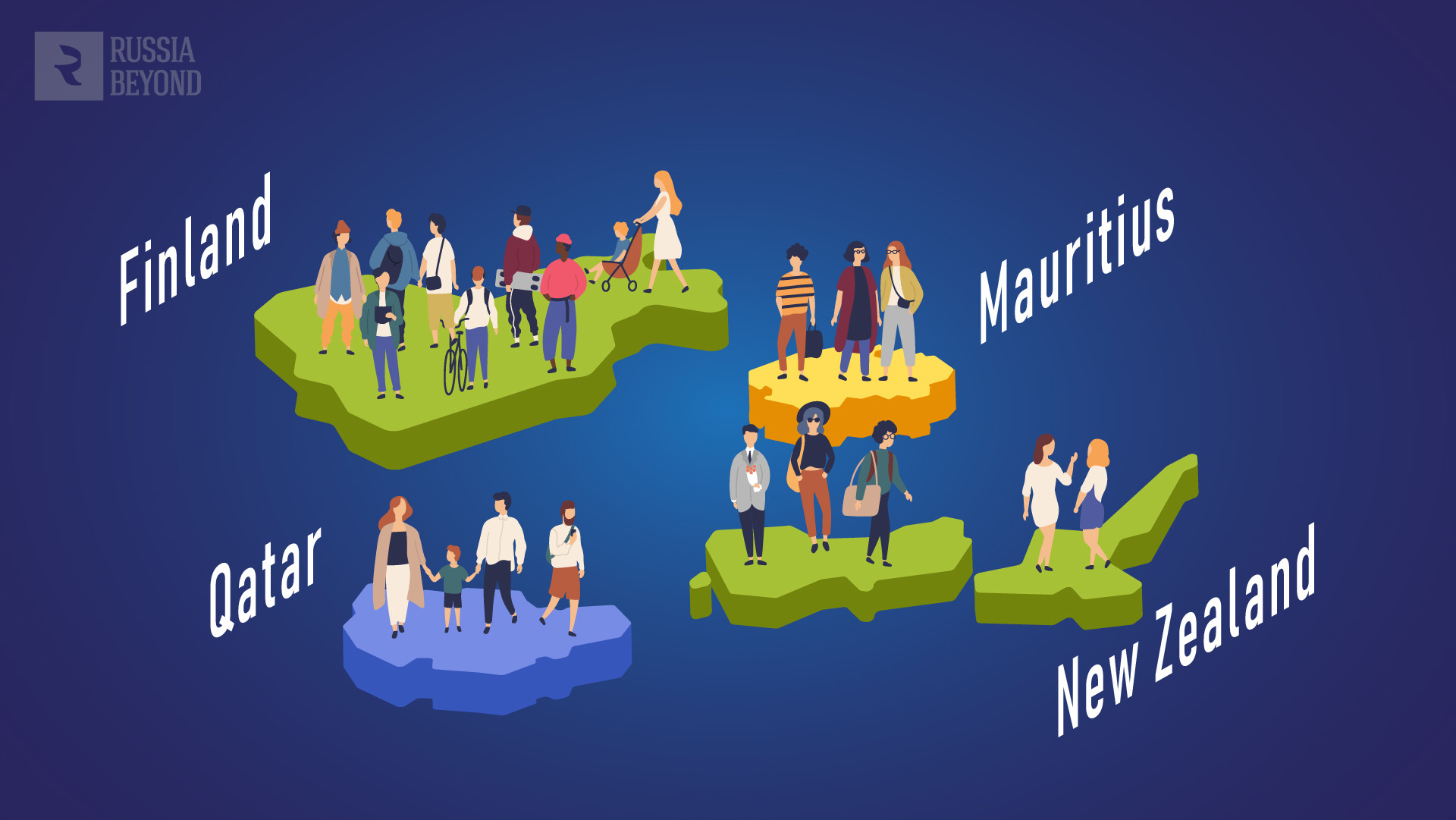 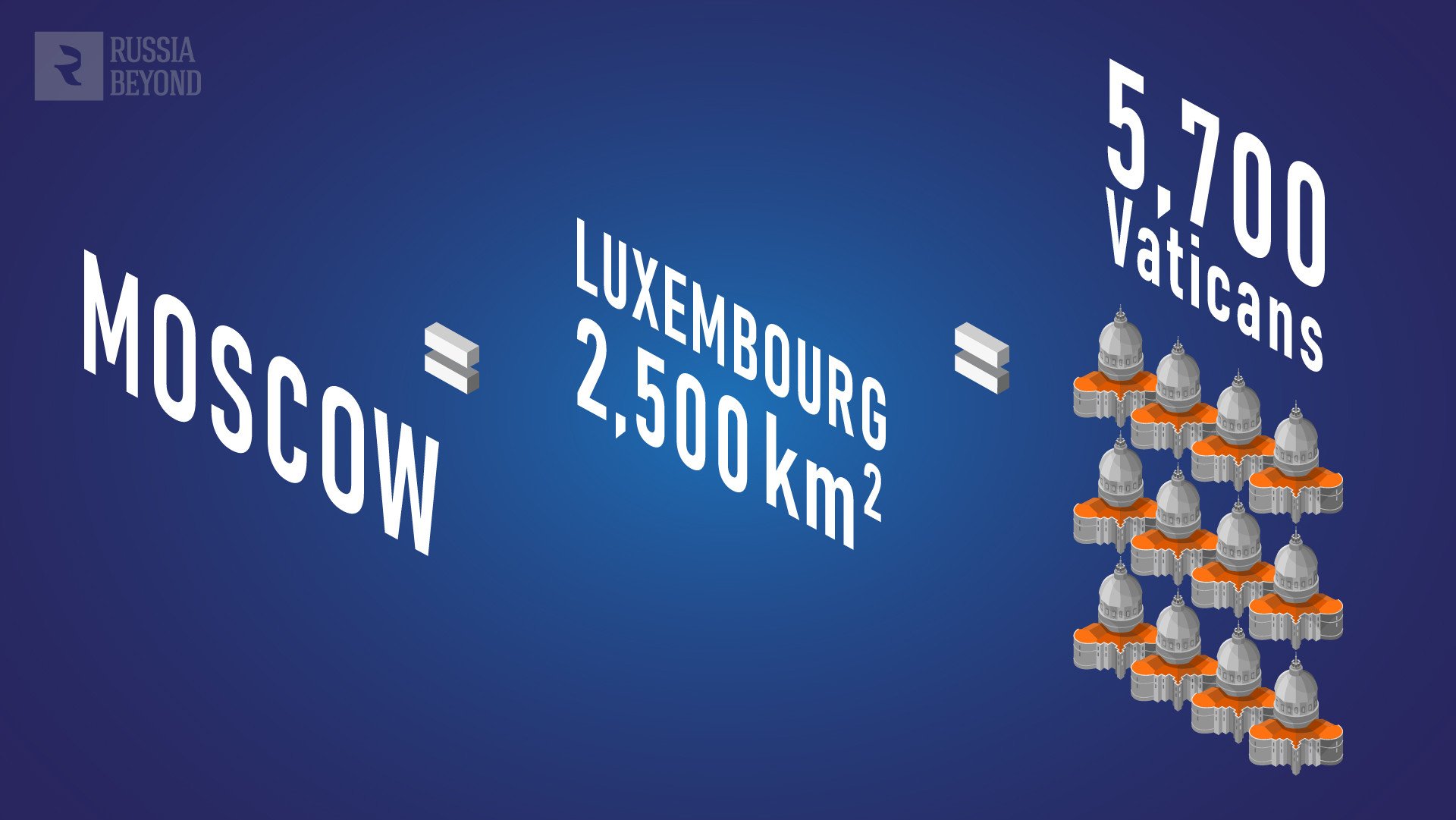 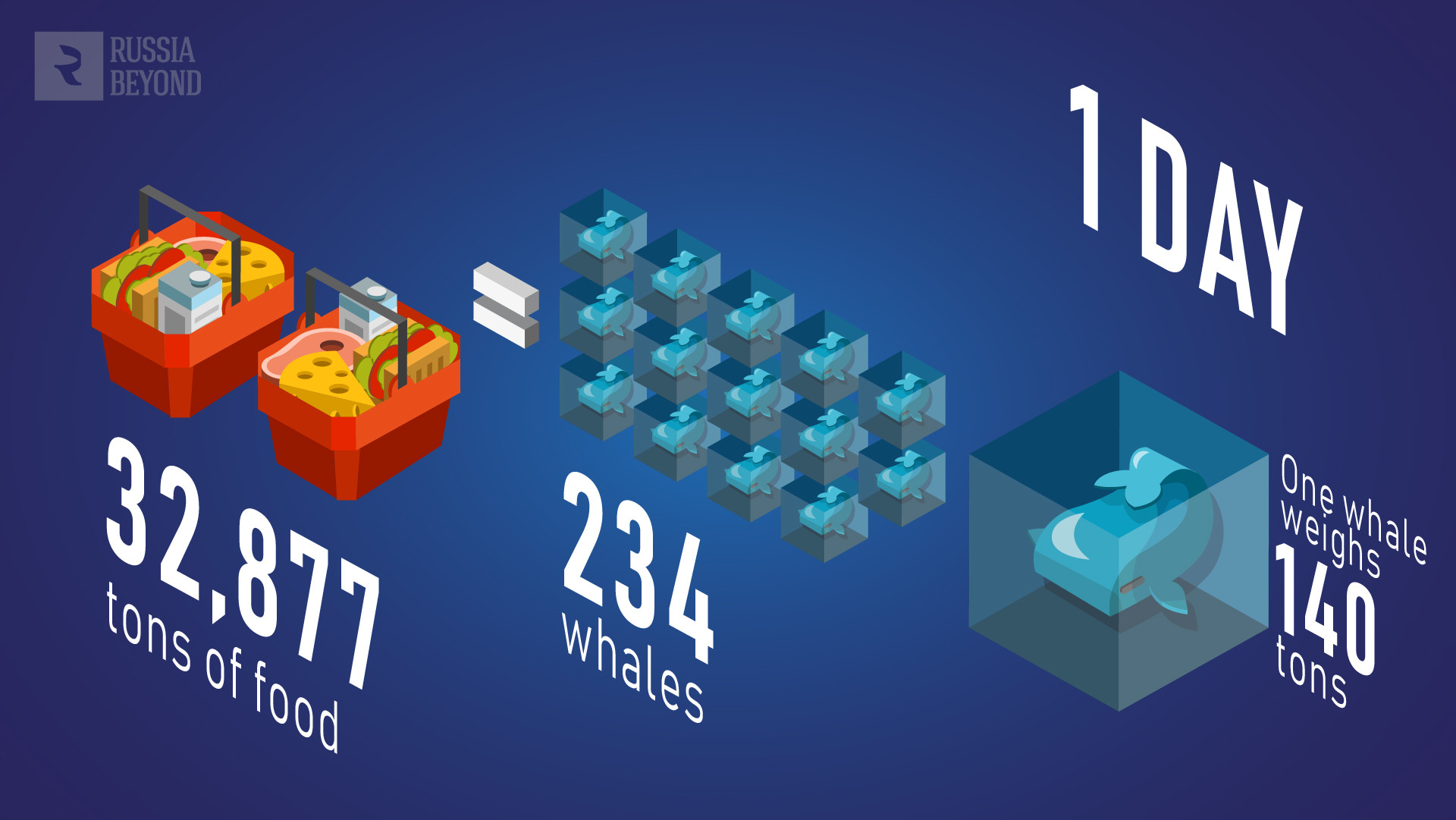 6. Muscovites eat 300 tons of ice cream on a summer’s day, an amount which equates to 50 elephants (one elephant weighs 6 tons). 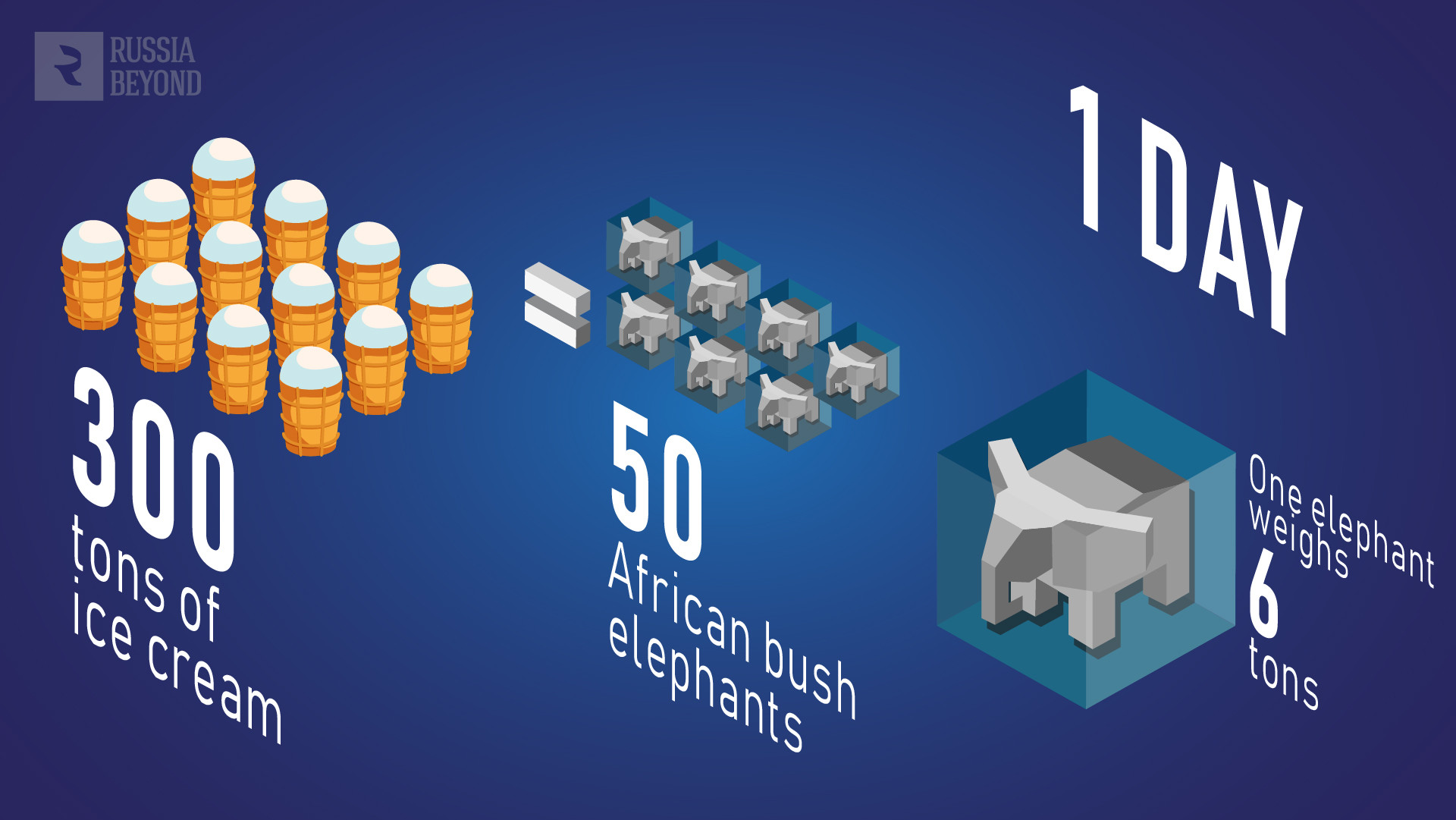 7. If we drink on average two liters of water a day, this means that Moscow needs 25 million liters of fresh water on a daily basis. This amount of water could fill the entire Lincoln Memorial Reflecting Pool. Just imagine, an entire pool in one day. 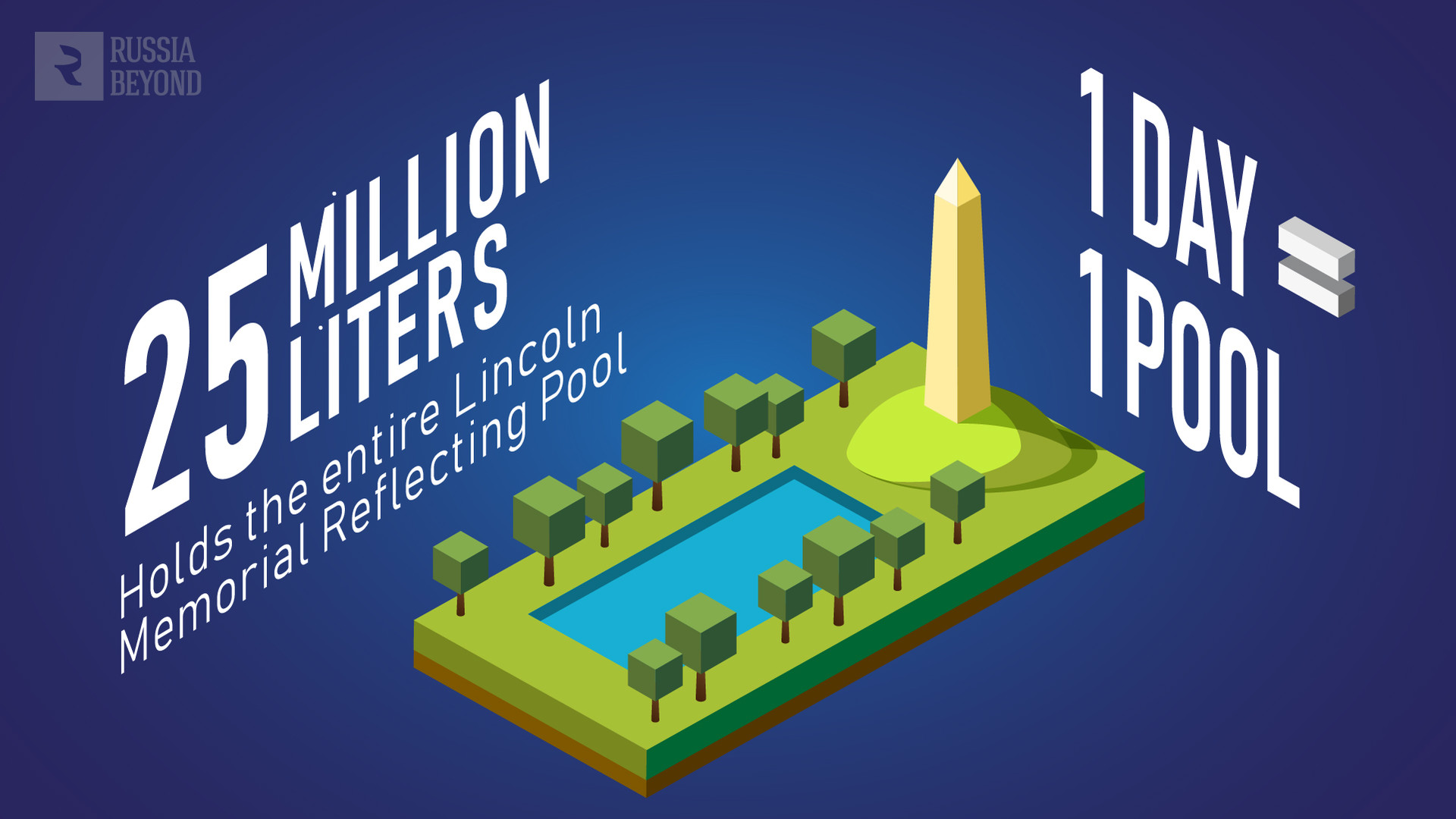 8. Muscovites also need to wash! Nearly 200 liters of water per person are needed per day just to fill all the baths, flush all the toilets and service all the technical facilities in the city. This huge volume of water could fill 100 Lincoln pools just in one day! 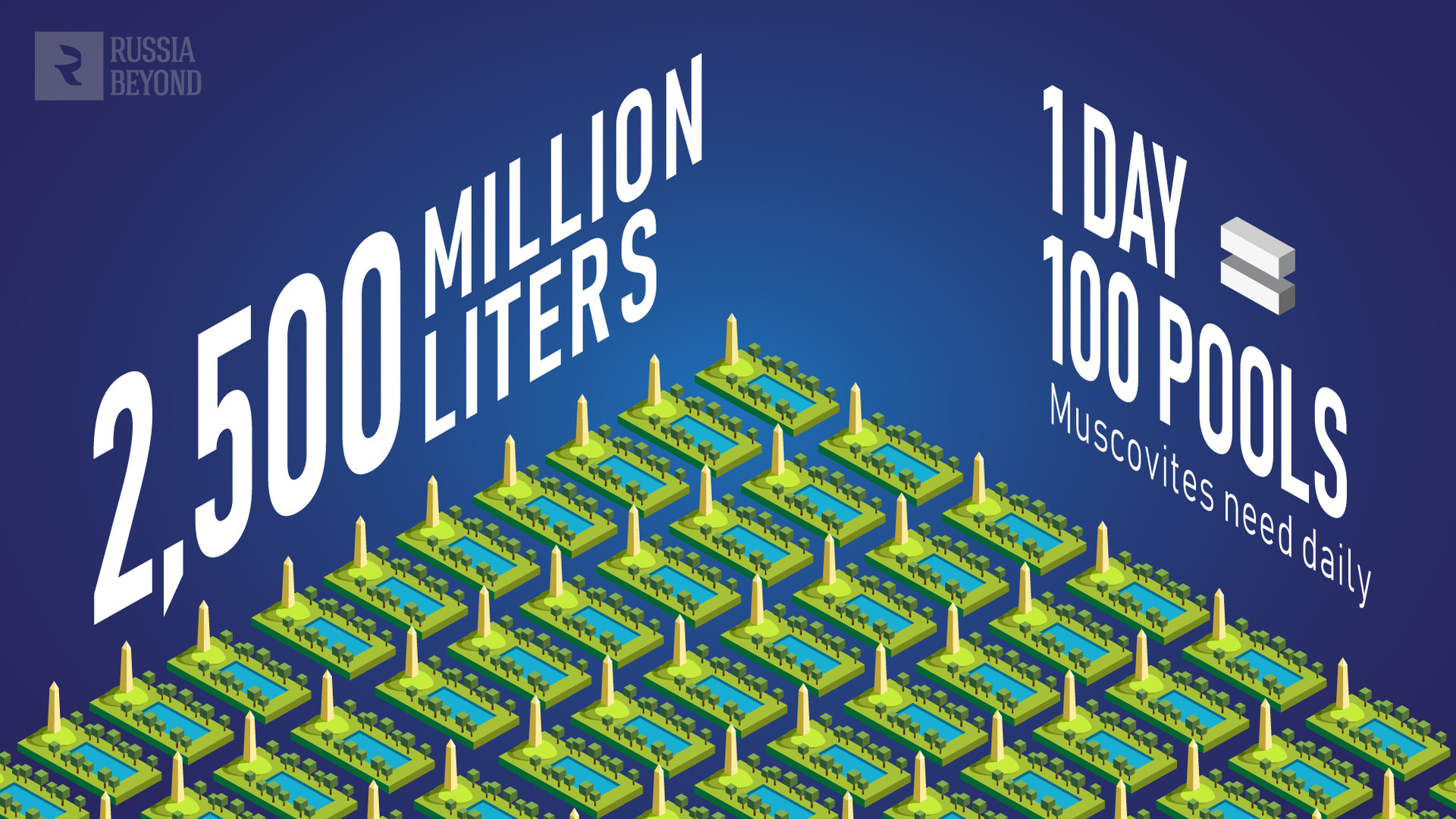 9. In Moscow, there is an astounding number of apartments and houses. Russians measure the size of their home in square meters. According to the Federal Service for State Statistics, the total floor space of all homes in the city in 2016 was 237 million square meters. This is 50 percent more than the total area of Liechtenstein, and includes all of its buildings, forests, mountains and fields. 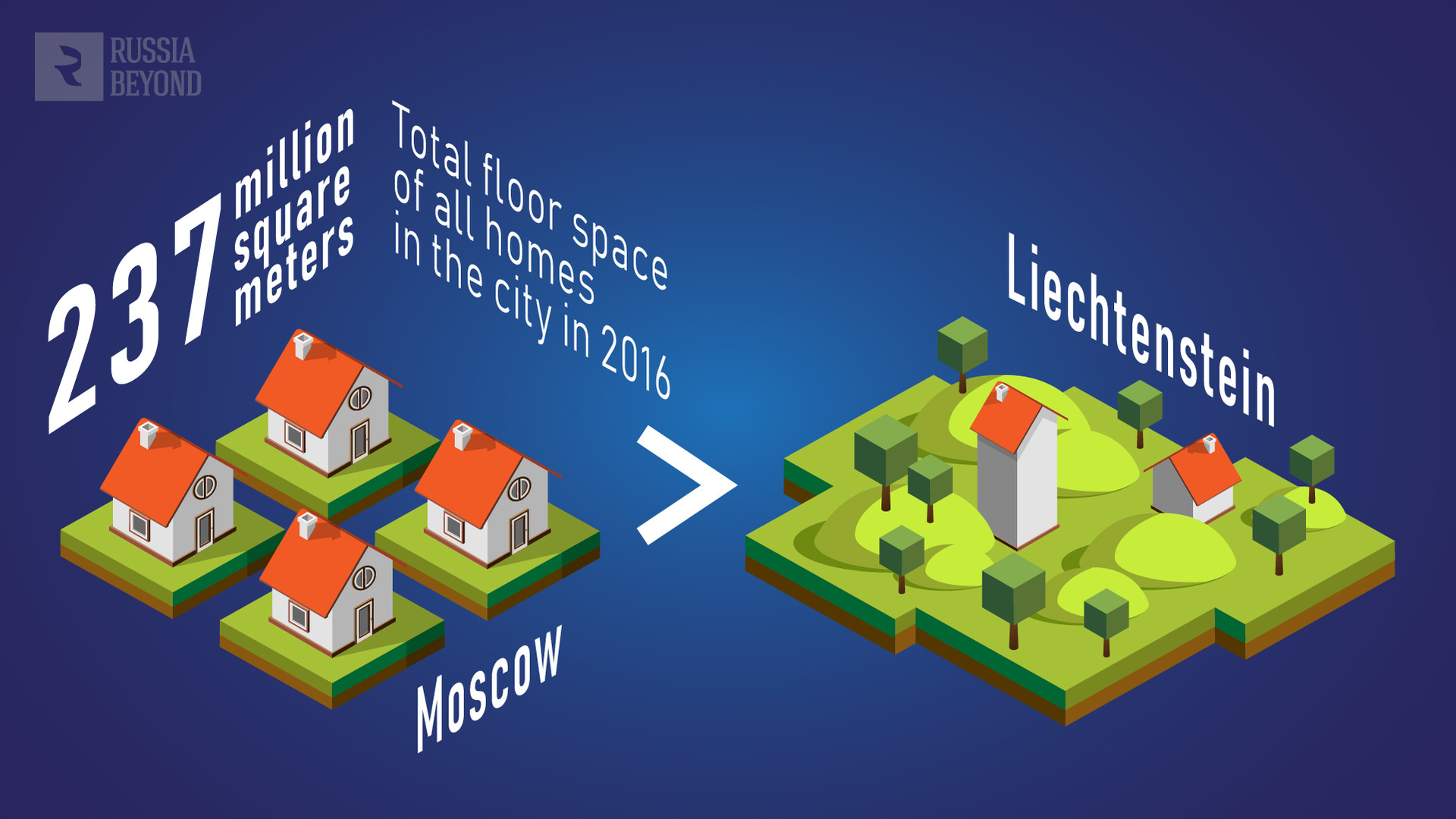 10. Muscovites love their cars. There are 4.9 million cars in total in the city. A round trip to work and back by car uses up 3.6 liters of fuel. If one liter of AI-95 costs 66 cents, this means that Muscovites burn $11.5 million worth of gasoline daily. This figure may vary depending on the classification and type of fuel, but with this amount you could finance an entire election campaign for the U.S. Senate, buy your own castle or an exotic island! 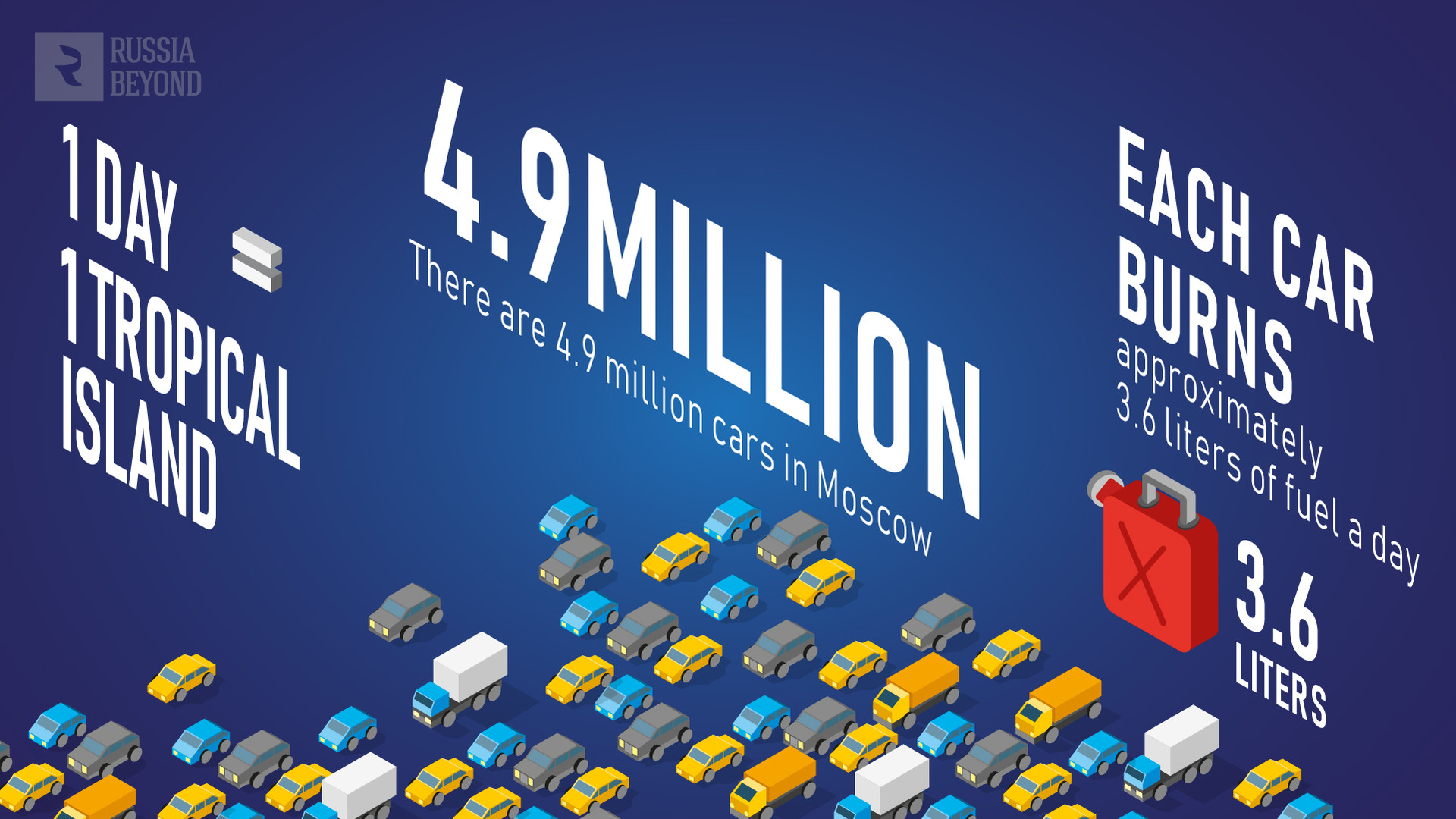