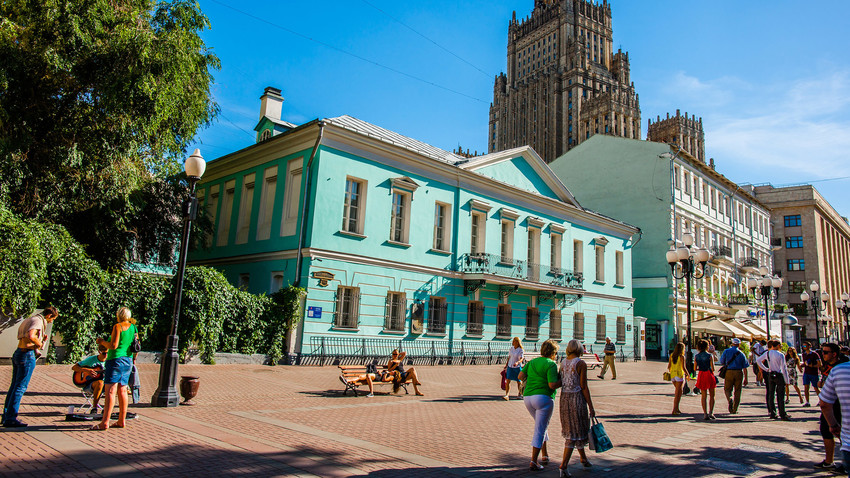 Legion Media
This cobbled stretch is about more than street musicians, ushankas, and matreshkas.

1. Soak up  the 19th century atmosphere in an old Moscow square 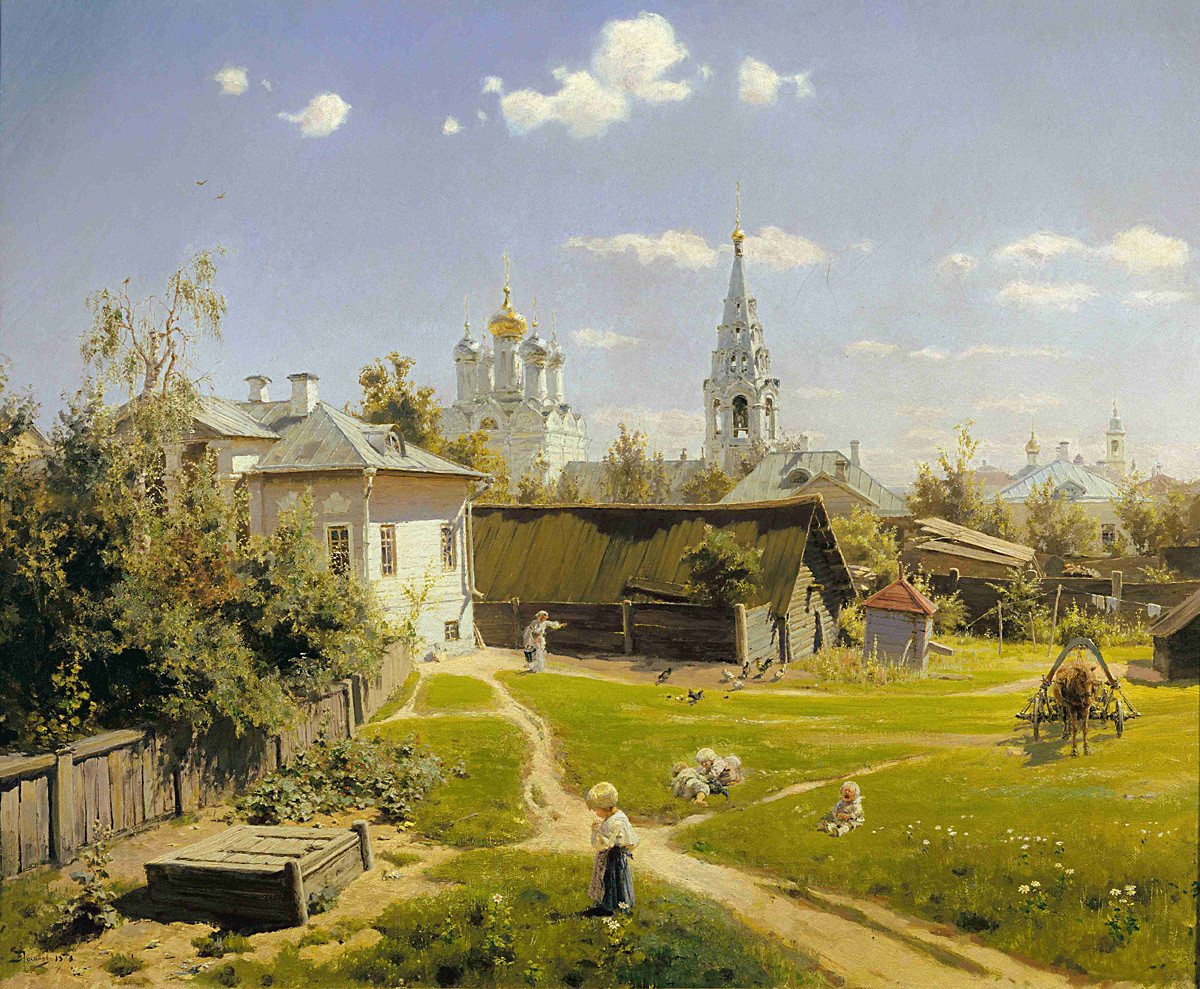 The spirit of old Moscow is captured perfectly in Vasiliy Polenov’s painting “A Yard in Moscow.” He painted it in 1878, while he was living here, just a few steps away from Arbat Street, near Spasopeskovskaya Square (named so after the local church, built in early 18th century). To get here, take the alleyway  between houses 36 and 38. The tiny one-storeyed house to the north of the square, built in 1836 and captured in Polenov’s painting, still exists. 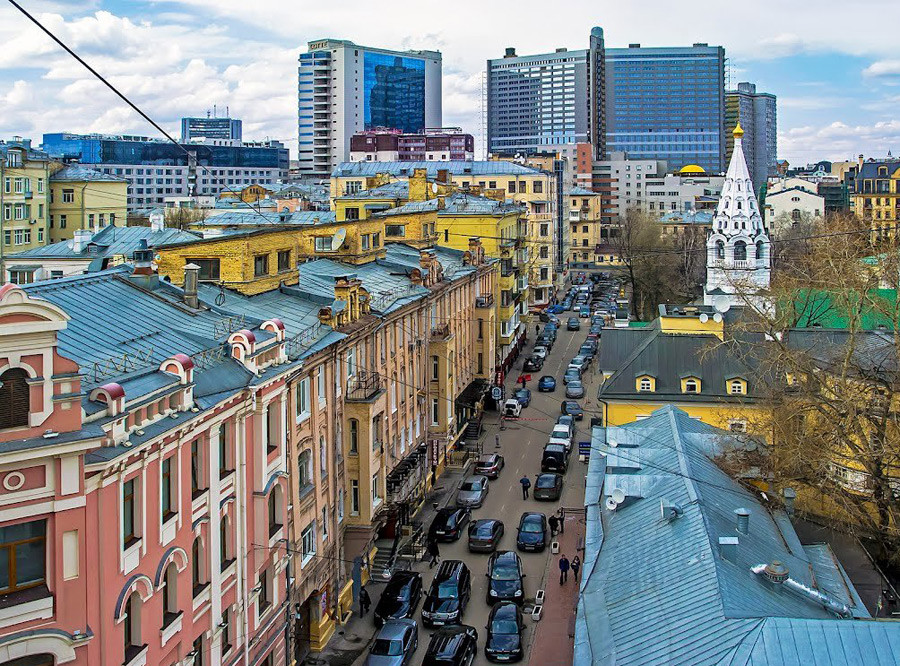 When New Arbat Avenue was being built in the 1960s, the construction destroyed the old district, crisscrossed with little lanes and streets, where artists, writers, and students once lived. This square, formed at a crossroads of four lanes, gives a great impression of how 19th century Moscow looked. Also, this square is where the famous Spaso House, the residence of the U.S. ambassadors to Russia since 1933, is located. Read our article about it. 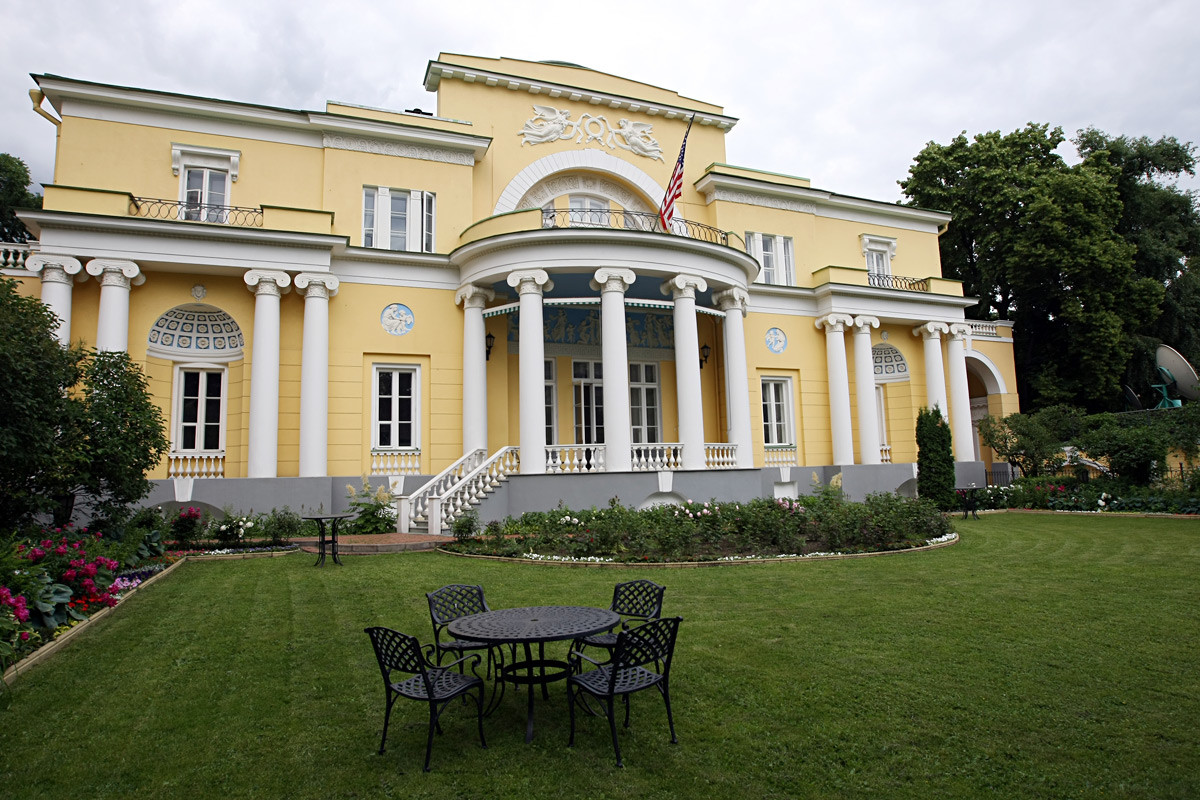 2. Eat at the restaurant where Chekhov dined and a famous Russian cake was invented 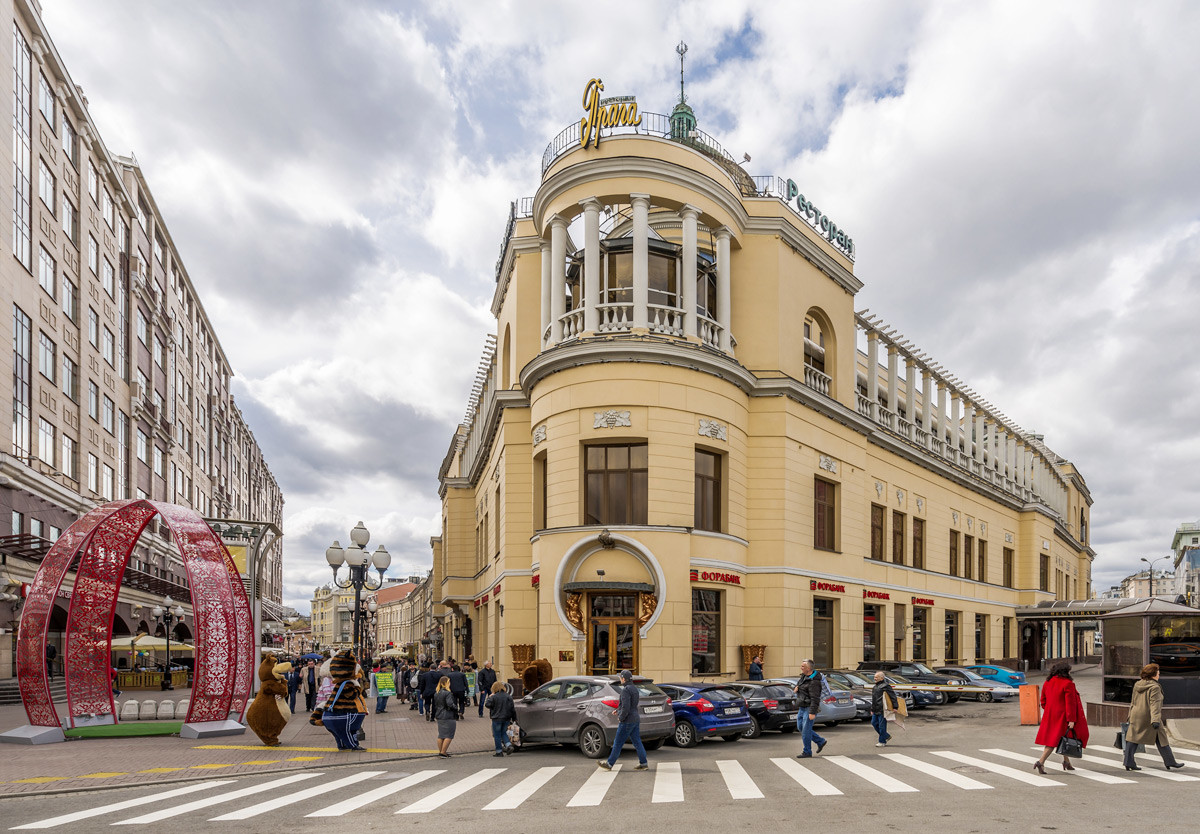 This imposing building on Arbat 2/1 dates back to late 17th century, and became famous in 1872, when a restaurant called Prague was opened here. The merchant Semyon Tararykin, who won the entire building during a game of billiards in 1896, made the restaurant one of the poshest places in Moscow. The inner space was divided into halls and cabinets, so the restaurant could accommodate both poor and rich clients at the same time, after which the income skyrocketed. 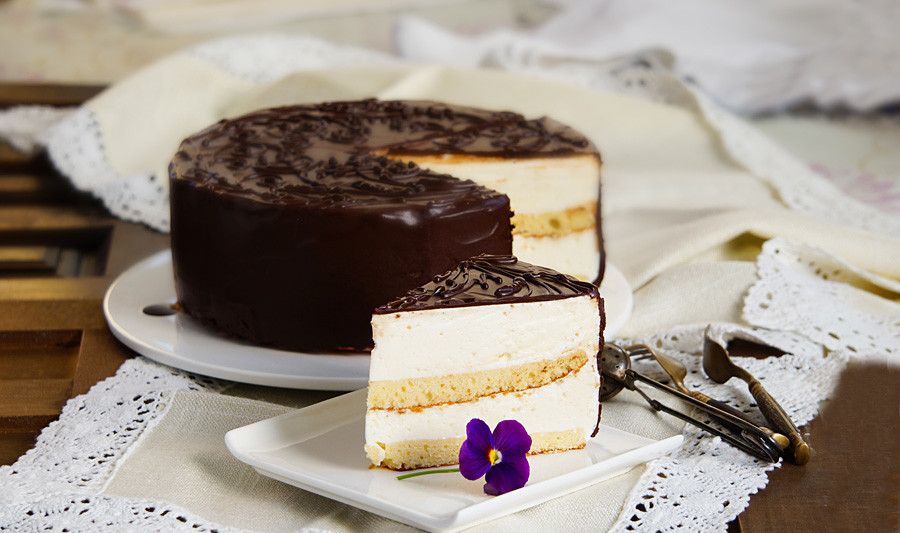 Prague became a favorite place for the artistic boheme. Here Anton Chekhov celebrated the premiere of his Seagull, Ilya Repin held a banquet to celebrate the restoration of his painting “Ivan the Terrible and His Son Ivan,” damaged by an Old Believer, and Leo Tolstoy read chapters from his novel The Resurrection. After the Revolution, the restaurant was transformed into a public canteen, and in 1954 was reopened as a posh joint once again. It’s remained so to this day. The iconic  Russian dessert, Ptichye Moloko (Bird’s Milk) cake, was invented by a Prague restaurant confectioner in 1974.

3. House where Pushkin drank and quarreled with his mother-in-law 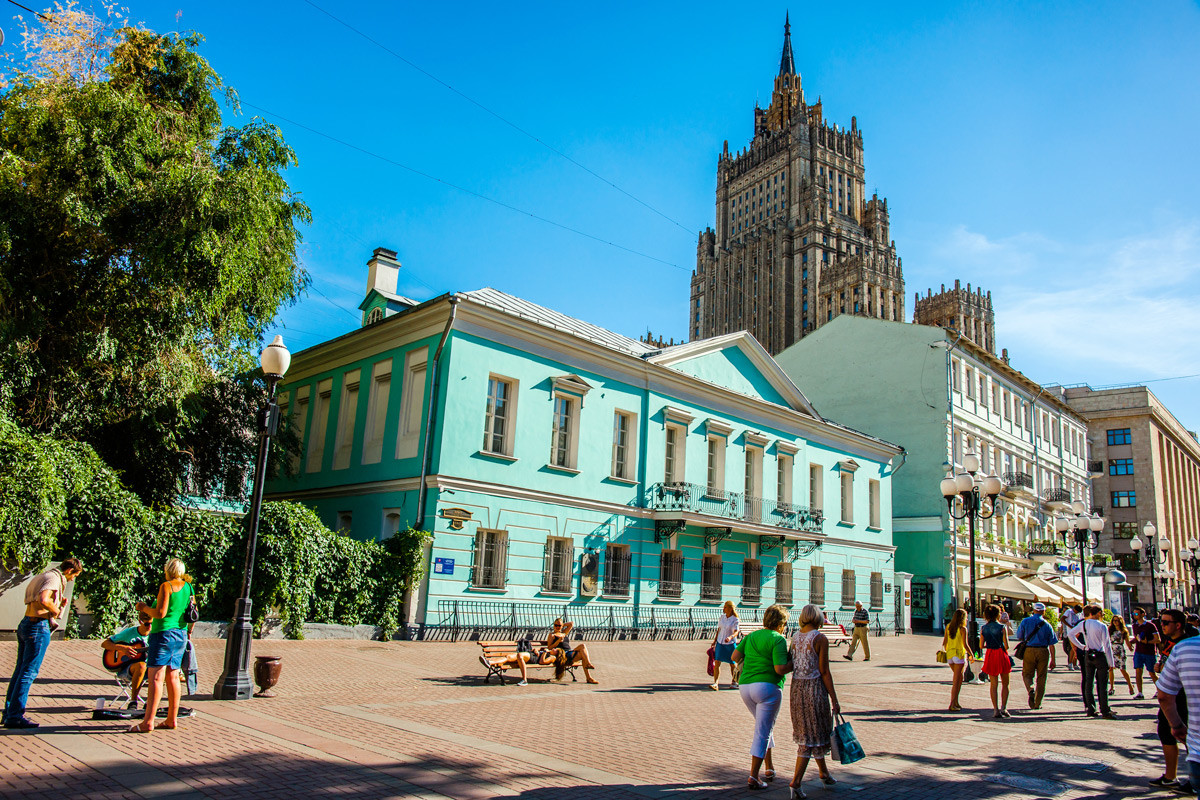 This house on Arbat 53/1 was turned into a house museum in 1986, although  Alexander Pushkin spent just a few months here. He lived in five rooms on the second floor, fabulously furnished, with his new wife Natalya Goncharova right after their marriage in a nearby church. The day before, Pushkin and a friend bid farewell to their youth in the house by drinking copious amount of alcohol. The poet was in melancholy mood that evening and spoke only in verse. 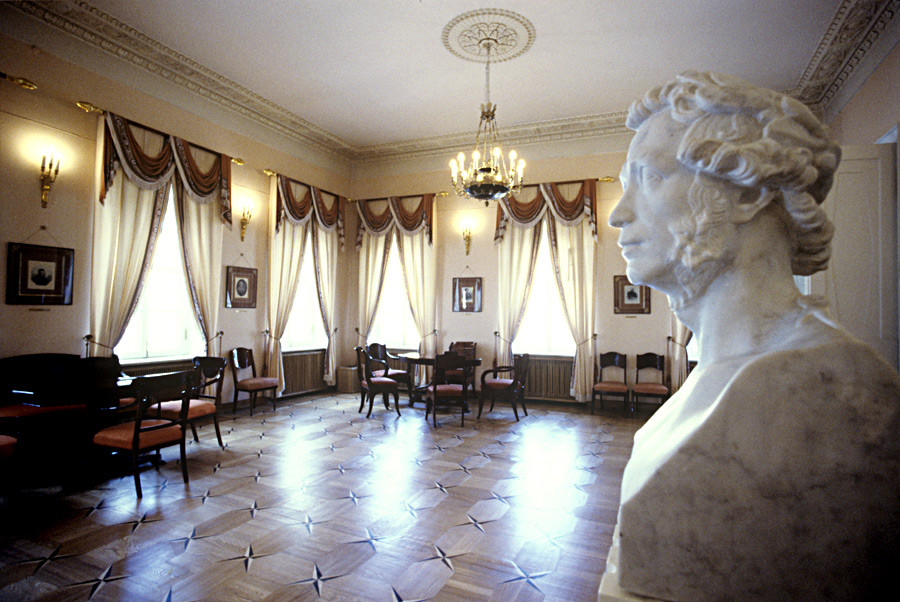 The morning after the marriage, Pushkin continued drinking, leaving his wife in tears for half a day. Nine days after the marriage, a ball was hosted here – a very expensive event that many attended, including numerous friends who lived in posh residences nearby. Another frequent guest was Pushkin’s new mother-in-law, who often rubbed the poet up the wrong way, eventually forcing him and his wife to move to Tsarskoye Selo.

4. A memorial where you can meet the last remaining Russian punks 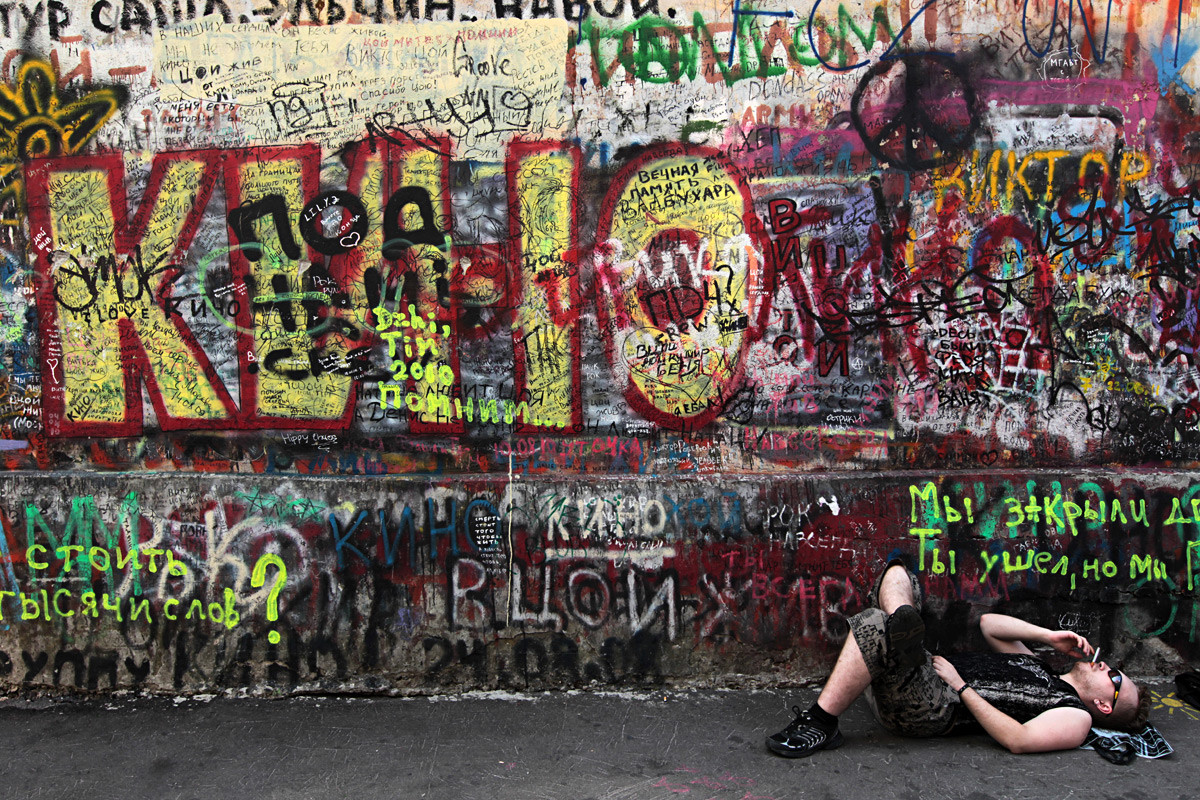 A guy taking a rest near Tsoi's Wall on Arbat Street, Moscow

Viktor Tsoi, leader of the famous Soviet/Russian rock band Kino, didn’t live or spend time on Arbat. But in 1990, after Tsoi died in a car crash, somebody daubed in black paint on the wall of the house on Arbat 37/2: “Today, Viktor Tsoi has died.” Later somebody wrote “Tsoi lives!” underneath, which became the motto for Tsoi’s cult.

If you want to meet the  remaining  die-hard Russian punk and rock fans, this is the place to go. Tsoi’s music wasn’t strictly punk, but his down-with-the-system attitude towards life continues to attract like-minded anarchists. His last concert in Luzhniki stadium in 1990 was watched by  over 70,000 spectators – even more than international stars Ozzy Osbourne, Scorpions, and Bon Jovi who played in the stadium the year before. 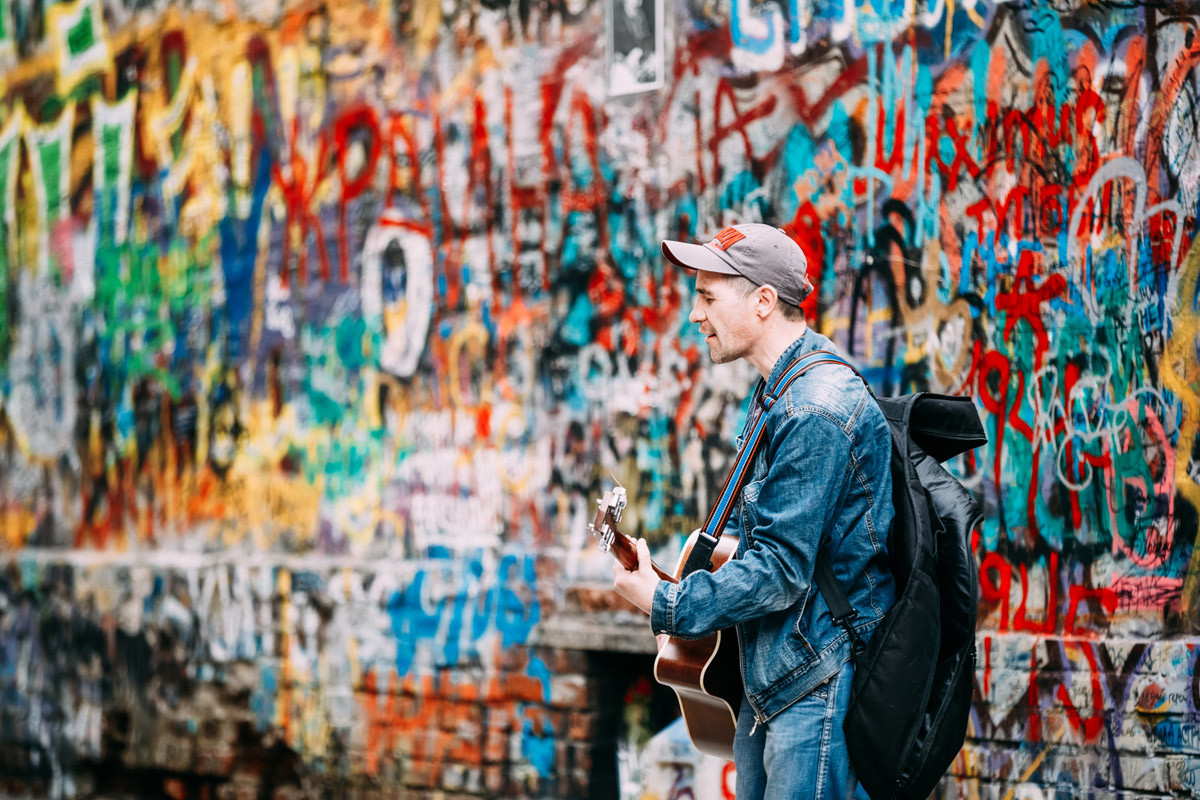 A street musician near Tsoi's Wall on Arbat Street, Moscow

There’s  a rumor going around claiming that the only reason the “wall” hasn’t been demolished is because it’s part of a garage belonging to some military organization. Indeed, nearby there is a grilled gate with an emblem belonging to judicial organs.

A bit of Arbat history

The strange name “Arbat” means “suburbs” in a Tatar language once spoken in ancient Moscow, when this district was on the outskirts of town, where the tsar’s soldiers and blacksmiths lived. After a major fire in mid-18th century, the surrounding quarters burned down to the ground. At the time, the territory was no longer was suburban, so Moscow’s noble families built their houses here. Since the beginning of the 19th century, Arbat became home for the old aristocracy and young boheme. The street had over 30 bookstores!

During the 1960s, a large part of district was destroyed during the construction of New Arbat Avenue. After that, in 1985, the street was pedestrianized, with lampposts and a many tourist shops. Since then, the street has been commercialized and lost much of its soul, but parts of the old Arbat still allow one to imagine how central Moscow looked in the 19th century.