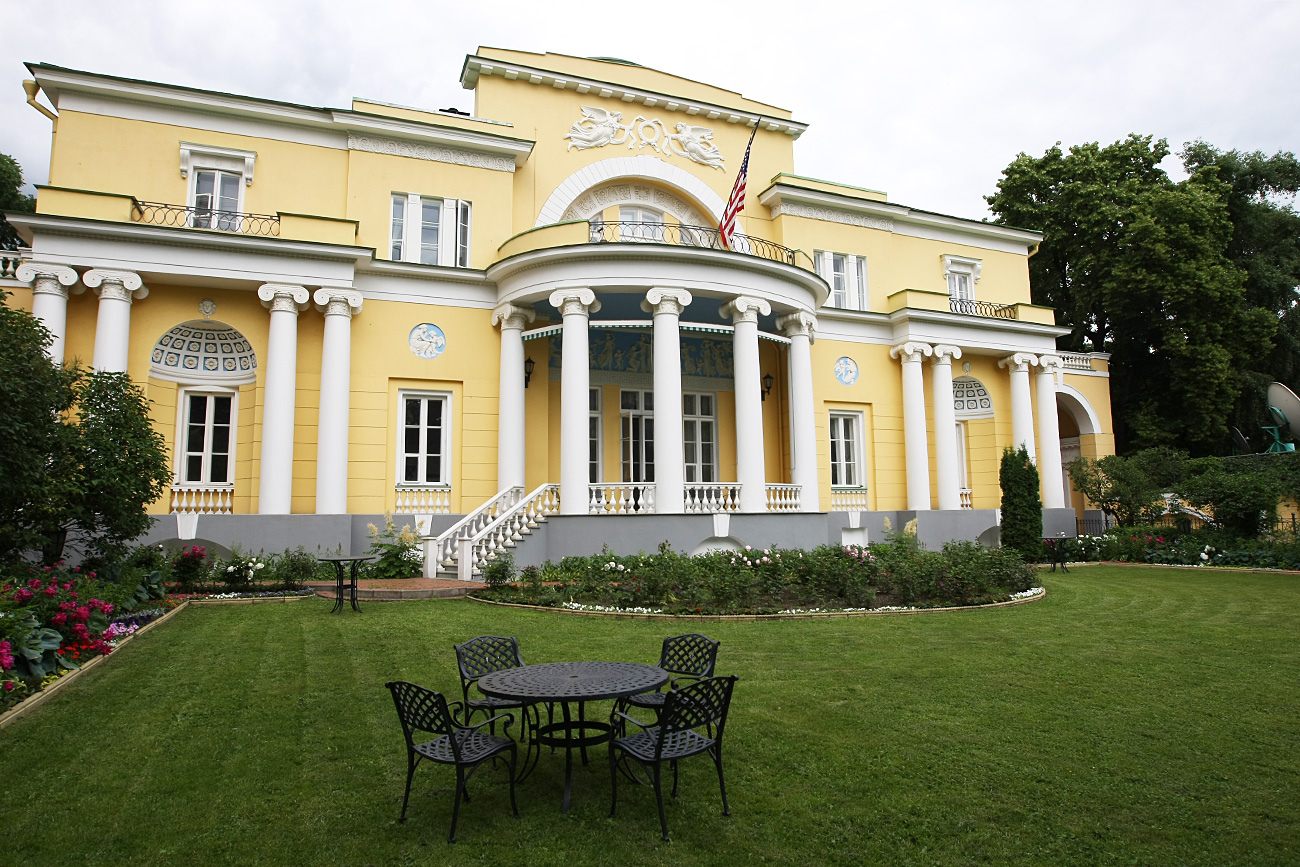 Spaso House became the residence of the U.S. Ambassador in 1933.

Valeriy Yevseyev/U.S. Embassy Moscow
The mansion on Spasopeskovskaya Square was not chosen as the scene of Satan’s ball in Mikhail Bulgakov’s novel “Master and Margarita” by coincidence. If the building’s walls could speak, they would reveal many secrets and legends.

Spaso House is tucked away near Arbat. Since 1933, each U.S. ambassador to Russia has lived there, but this was not always the case.

1. Bulgakov was hugely influenced by the 1935 Spring Festival 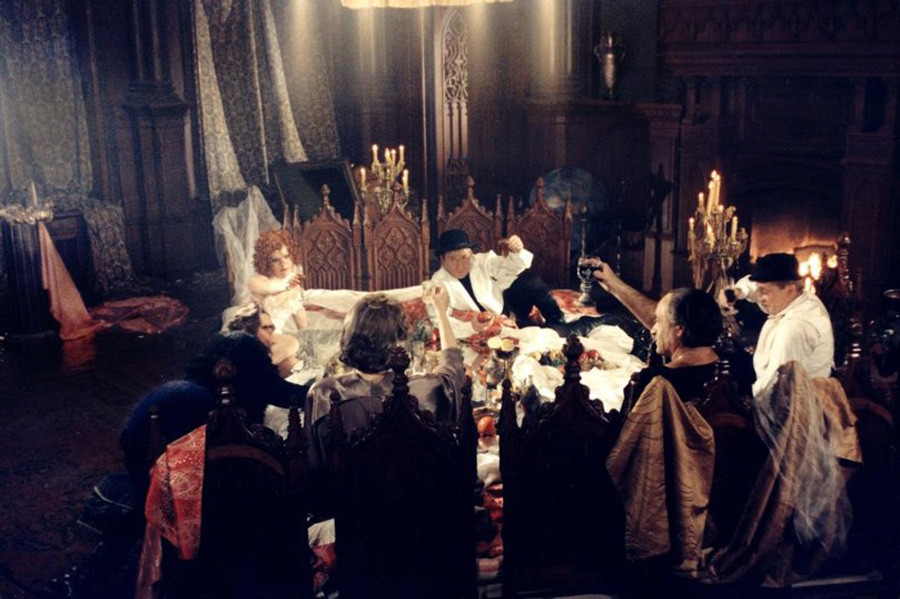 The Spring Festival held on April 24, 1935 at Spaso House is legendary for being one of the most lavish parties ever held by the U.S. mission abroad. Prominent figures from the arts world were invited and Bulgakov was among the guests. According to his wife, after the party he radically rewrote the chapter entitled “The Spring Ball of the Full Moon” ("Satan’s ball") in his famous novel Master and Margarita. In reality, there were fountains of wine and champagne, the finest orchestra, and birdsong, so those familiar with the book will be reminded of Woland’s infamous party.

2. A bust of Kennedy was hidden from Reagan 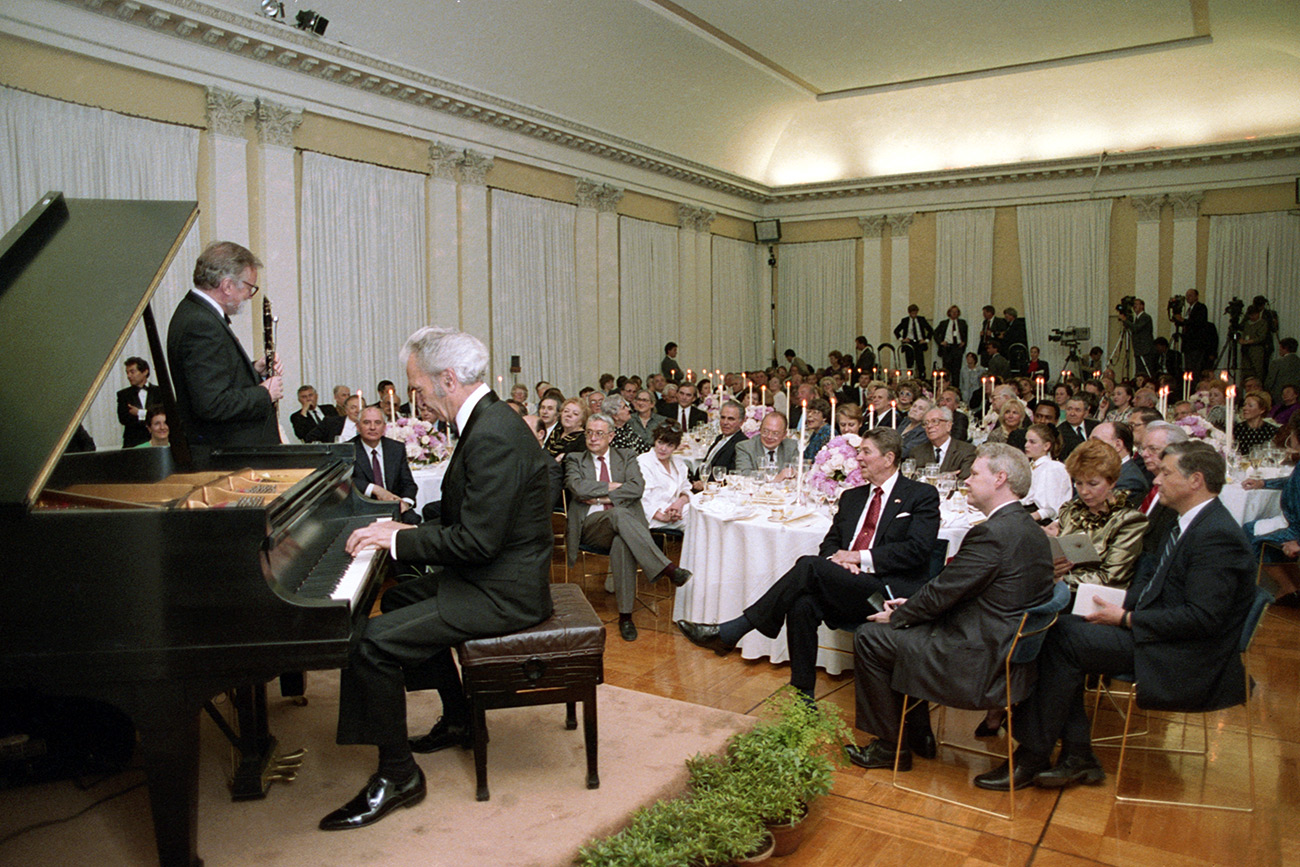 Upon entering the building, guests can see flags and a fireplace with a bust of former President John. F. Kennedy above it.

In May 1988, Spaso House welcomed President Ronald W. Reagan, who traveled to Moscow for a meeting with General Secretary Mikhail Gorbachev. In addition to arranging extensive and time-consuming renovations of the house, the Department of State also airlifted all food and china to Moscow that would be used during the official dinner. As observant reporters noted, the bust of Kennedy was “moved to a more discreet corner.” 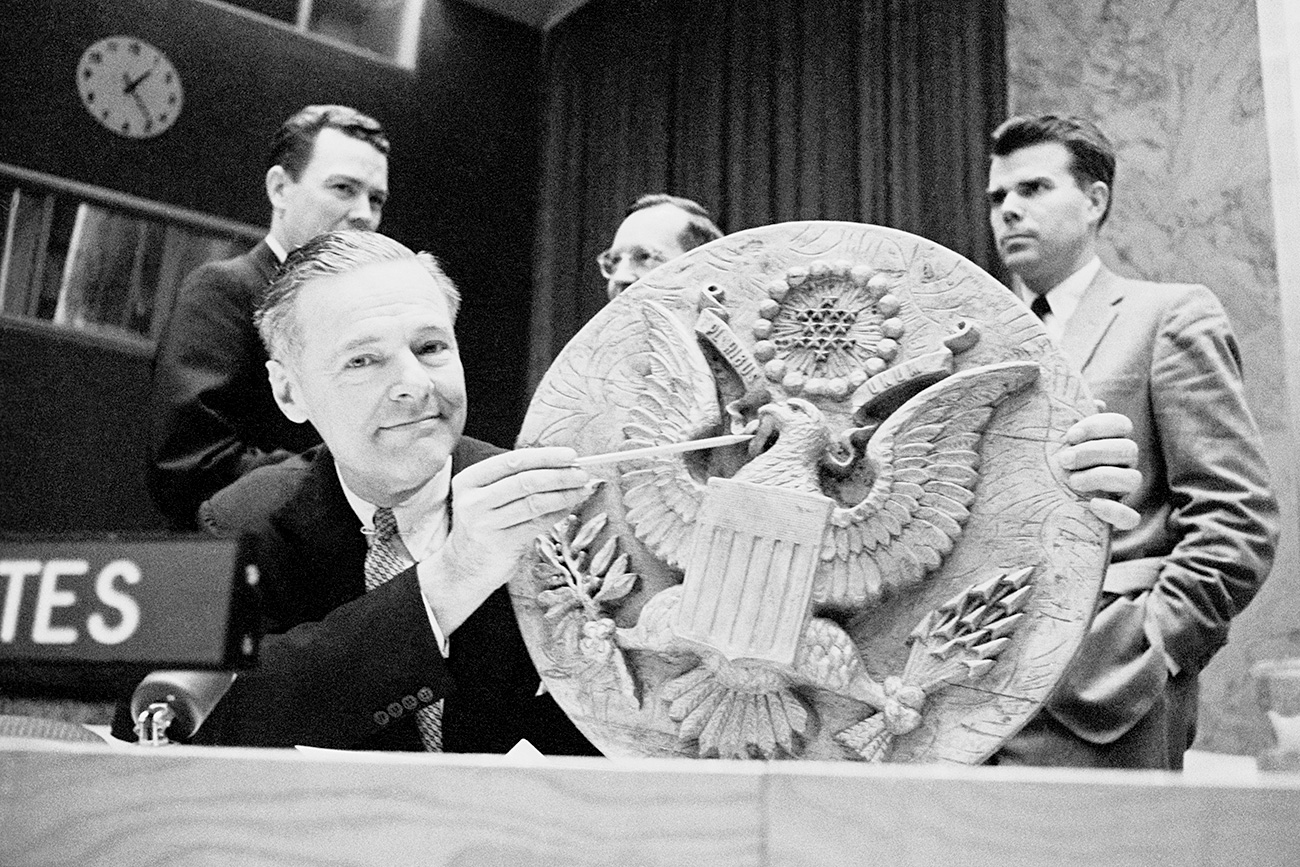 United States Representative to the United Nations, Henry Cabot Lodge, points to the spot on the seal where it has been bugged. / Getty Images

There are many spy stories related to Spaso House. The most famous is the story of a "bug" inside the wooden U.S. state emblem. The Soviet Union learned that Ambassador William Harriman was a passionate collector of crafts made from rare woods, and in 1945 he was presented with an elaborate replica of the Great Seal of the United States carved in wood.

The souvenir was so beautiful that the U.S. ambassador hung it on the wall of his office. Of course, he didn’t know that inside was a bug called Chrysostom (also known as Golden Mouth).

Chrysostom survived - and eavesdropped on - four ambassadors. The furniture changed, but the bug kept its place on the wall. The Americans finally discovered it in 1952, when its radio signal was detected. Now the emblem is kept in the CIA Museum.

4. Uncontrollable seals in the Chandelier Room 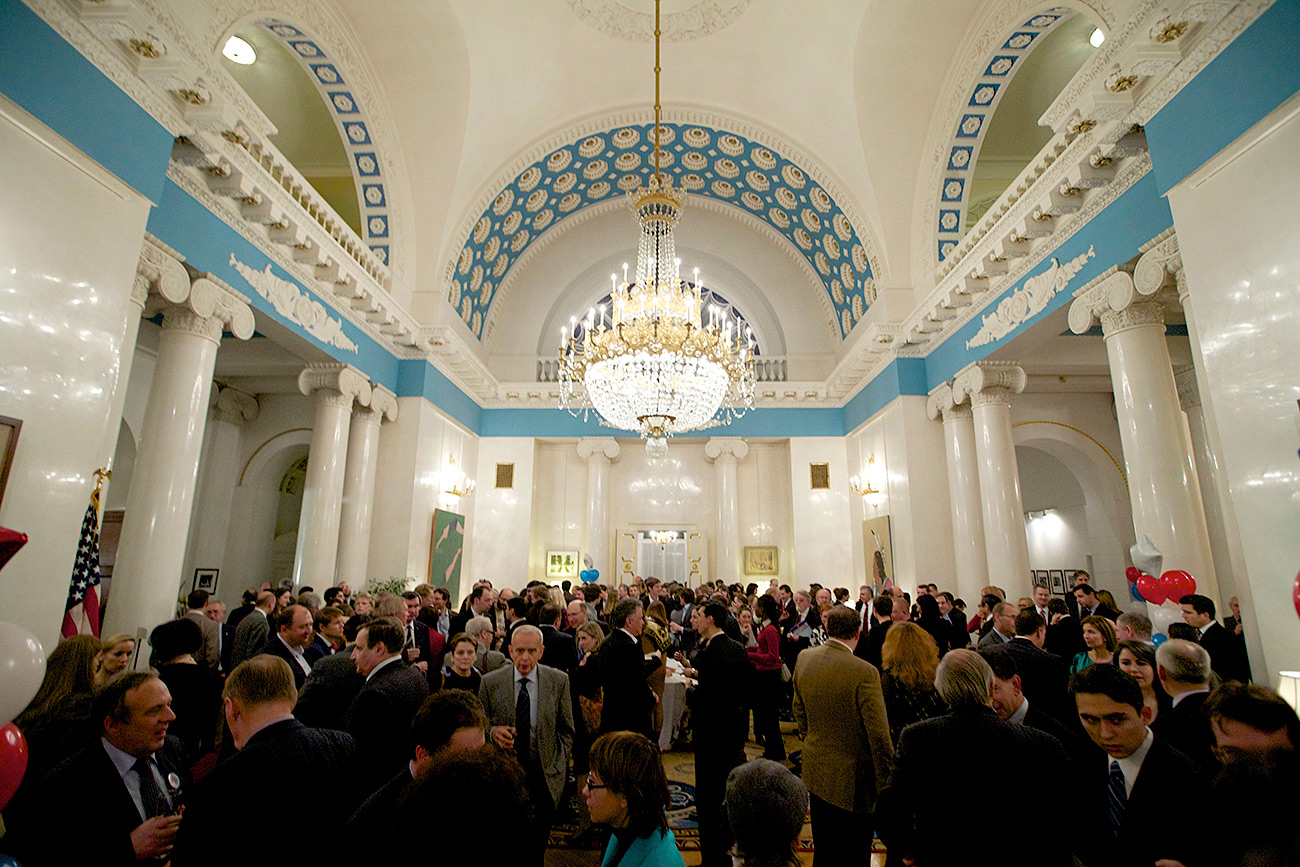 Guest attend the reception at the Spaso House. / AP

During the Christmas season of 1934, the first U.S. ambassador in the Soviet Union - William Christian Bullitt - instructed his interpreter Charles Thayer to organize “a real shindig” for all of the American citizens in Moscow. The Moscow Circus lent him three seals. In the evening guests gathered in the Chandelier Room, and the seals entered with a Christmas tree, a tray of glasses, and a bottle of champagne balanced on their noses. The seals then performed a variety of tricks, after which their trainer, who had been drinking, suddenly fainted. Without his control, the seals ran amok throughout the house, while the embassy staff attempted to corral them. Fortunately for Thayer’s career, Ambassador Bullitt was not in attendance, as he had been temporarily recalled to Washington, D.C.

5. The mansion was home to the ‘Siberian American’ 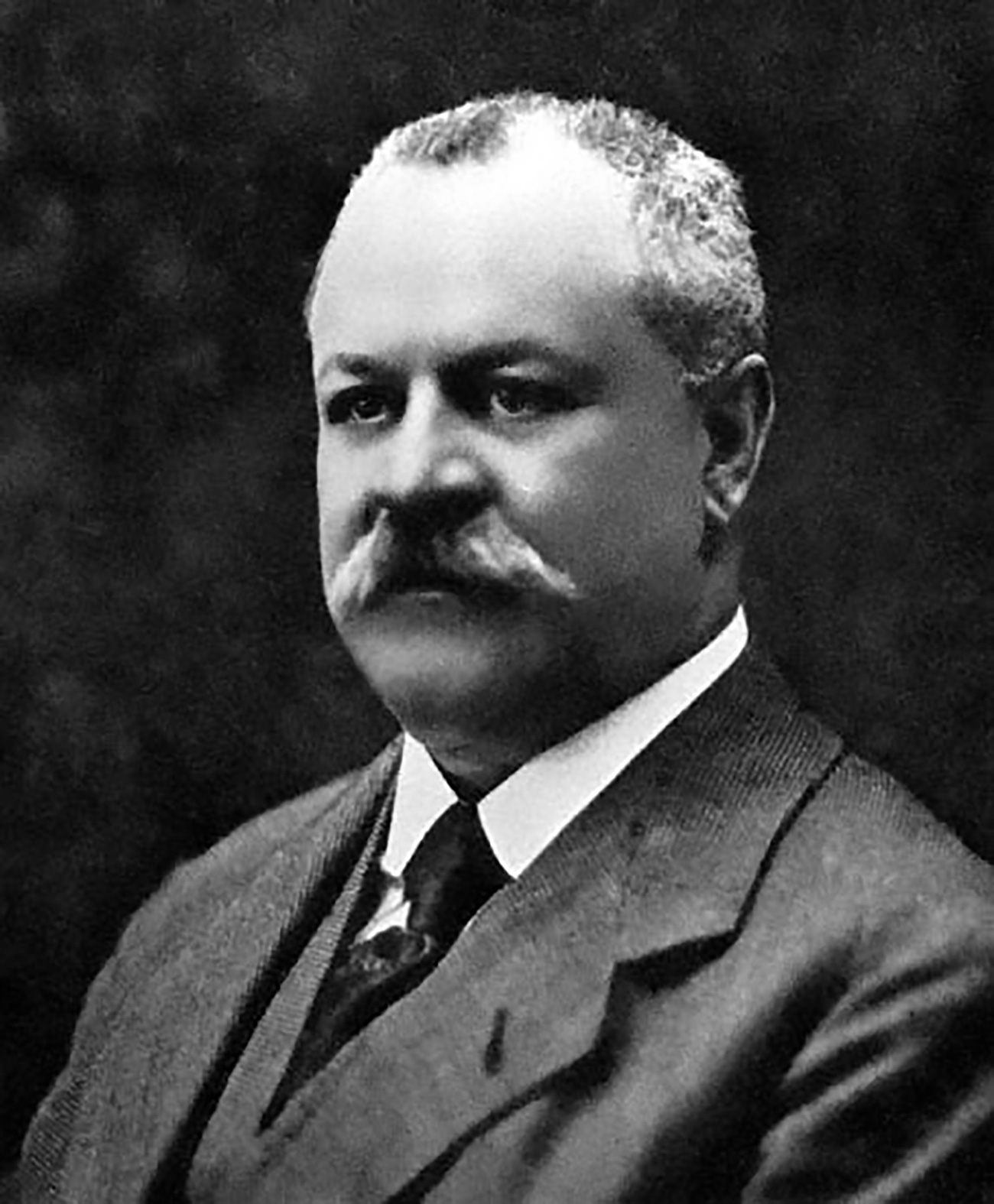 Nikolay Vtorov moved to Moscow from Siberia in the early 20th century. By that time he was already a successful entrepreneur and owned a number of industrial enterprises and banks.

In February 2017, with the help of archive materials, Forbes magazine compiled a list of the wealthiest people to have lived in Tsarist Russia. Vtorov topped the bill with more than 60 million golden rubles ($720 million).

Due to his knack of making money, Vtorov was coined "the Siberian American."

After the 1917 Revolution, according to some historians, Vtorov pledged allegiance to the new authorities, but in May 1918 he was killed under mysterious circumstances in his office. Vtorov’s descendants went abroad, and his mansion in downtown Moscow was seized by the state and occupied by high-ranking officials. It eventually became the residence of the U.S. Ambassador in 1933, when the United States and the Soviet Union established diplomatic relations.

6. The biggest chandelier in Moscow 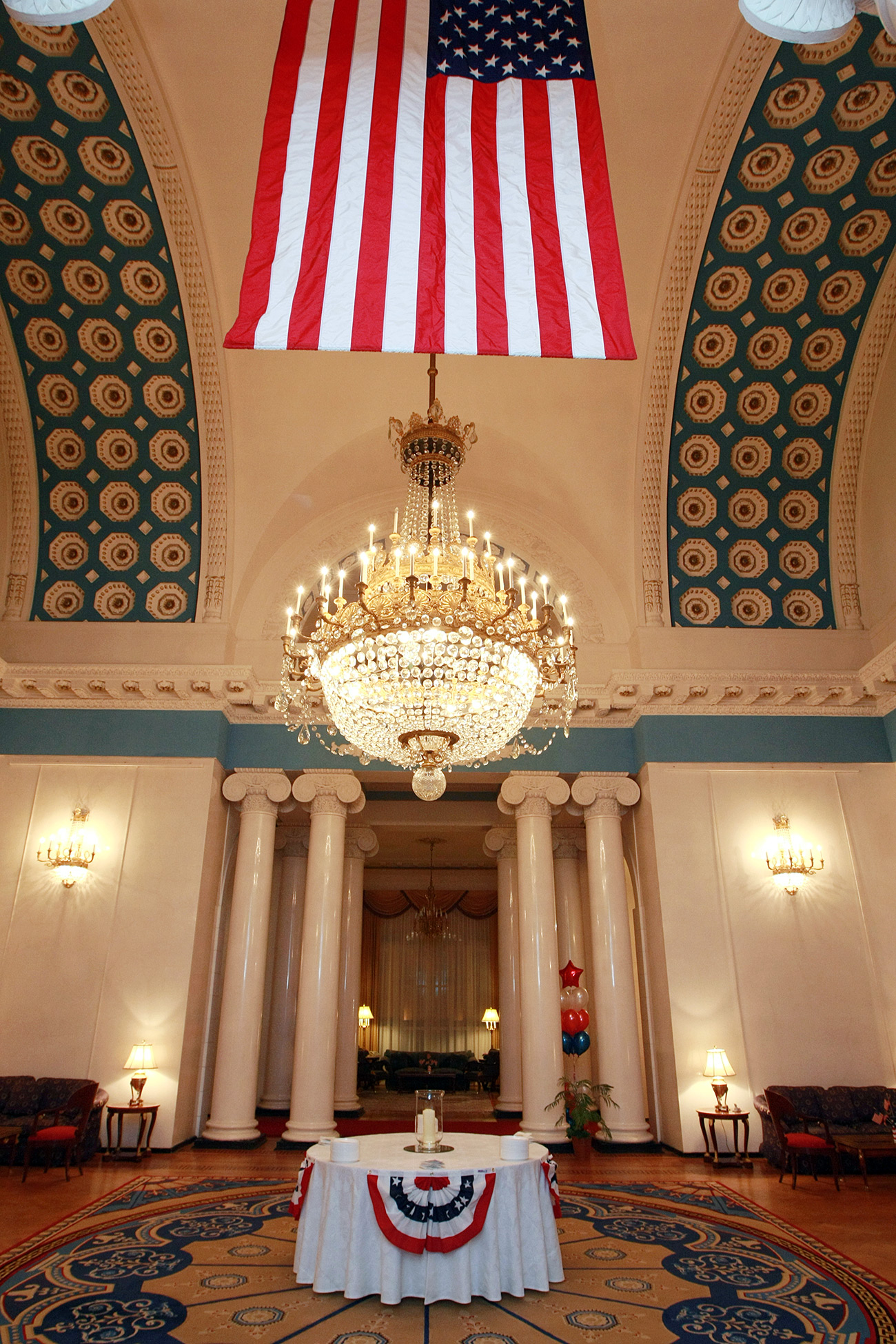 Before a reception at the Spaso House. / Mikhail Fomichev/RIA Novosti

The mansion was built from 1913 to 1915  and equipped with the latest technology of the era. The designers also didn’t hold back when it came to the interior. The main hall is 25 meters long and crowned with a high vaulted ceiling and huge chandelier. It’s believed that this chandelier, made of Russian crystal, is the still the largest chandelier in Moscow today.