Baikal's shamans battle spirits, demons and the worst foe of all - each other 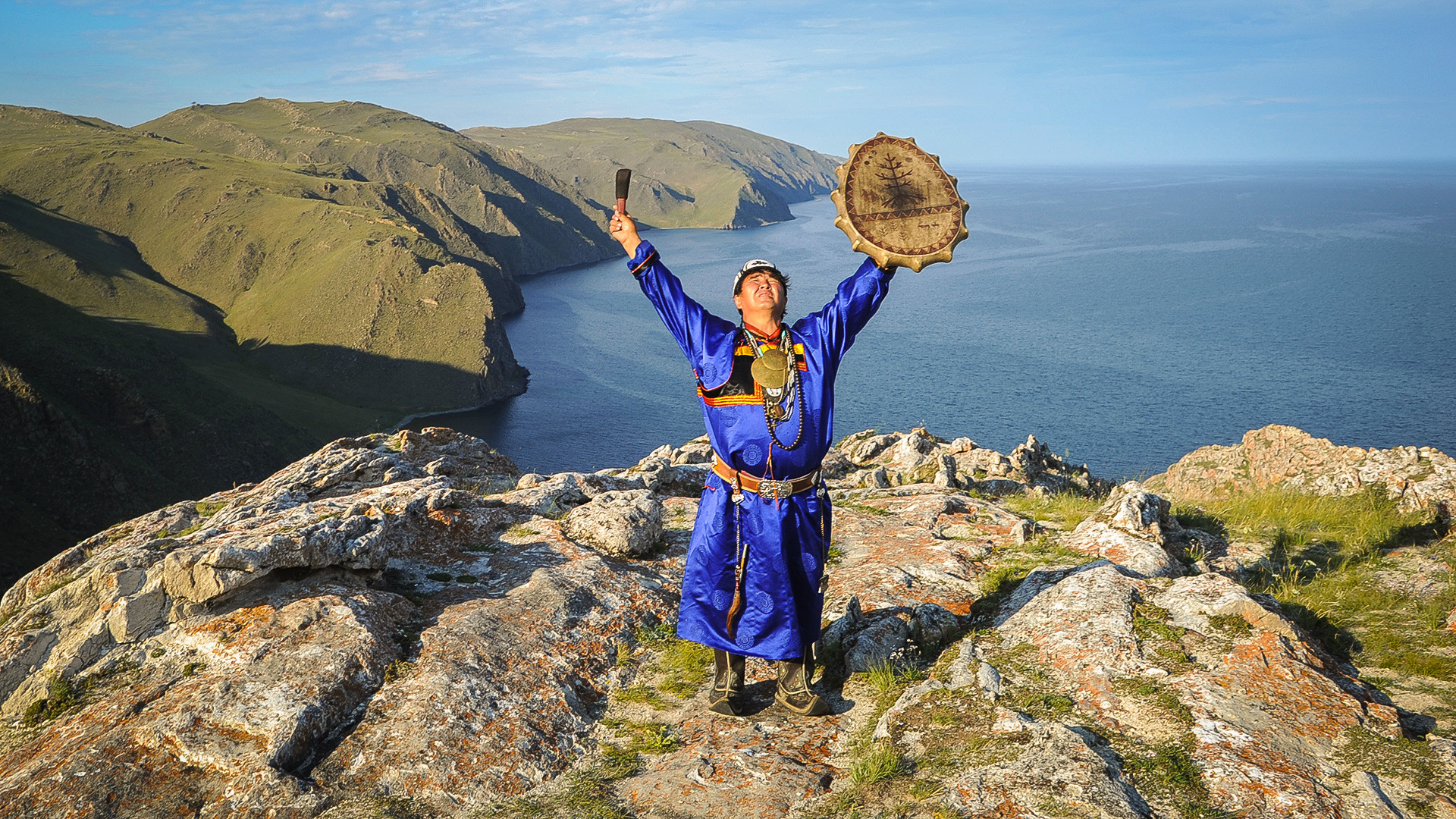 Iliya Pitalev/Sputnik
In an era when Lake Baikal's Olkhon Island, the spiritual heartland of Russia's shaman community, is flooded by tourists, and locals have learned to milk money from them, a full-on war is raging among shamans – self-proclaimed intermediaries between the material and spiritual worlds – for control over mortal souls.

When dusk falls, Valentin Khagdaev begins the preparations for a ritual. A fish-shaped lock with the mechanism hidden in the eye opens the doors to a wooden yurt, where the shamanic rites are carried out. Inside it is cold, steam-like breath pours from the nose and mouth.

For many, Valentin is Baikal's chief shaman. He considers himself a true guide to the world of spirits, surrounded by charlatans. The mysterious shamanic rite he is about to perform will surely prove it.

An hour before the ceremony to summon the spirits of fire and of my ancestors to protect me over the coming year, Khagdaev sits in his kitchen and talks about modern shamanism. "I don't trust neo-shamans. They’re showmen," he says. "A real shaman must have an extra bone as confirmation from the sky." 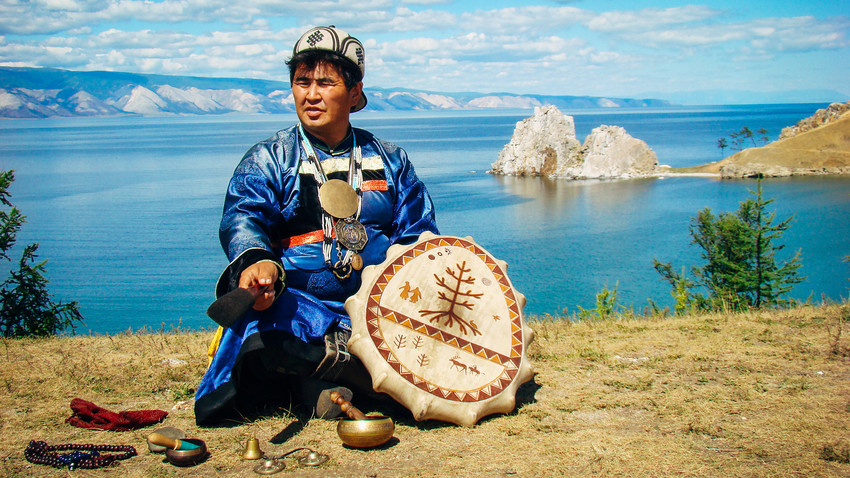 True to his word, he has six fingers on his right hand. Scattered across the kitchen table are breadcrumbs, and steam rises from boiled noodles in tiny bowls. Khagdaev speaks ill of a fellow practitioner: "A real shaman never asks for money. Whatever people can afford, they give. It can be food."

He doesn't name names, but those in the know understand that he is hinting at Mikhail Ogdonov, another well-known shaman on the island, who is only interested in profit. 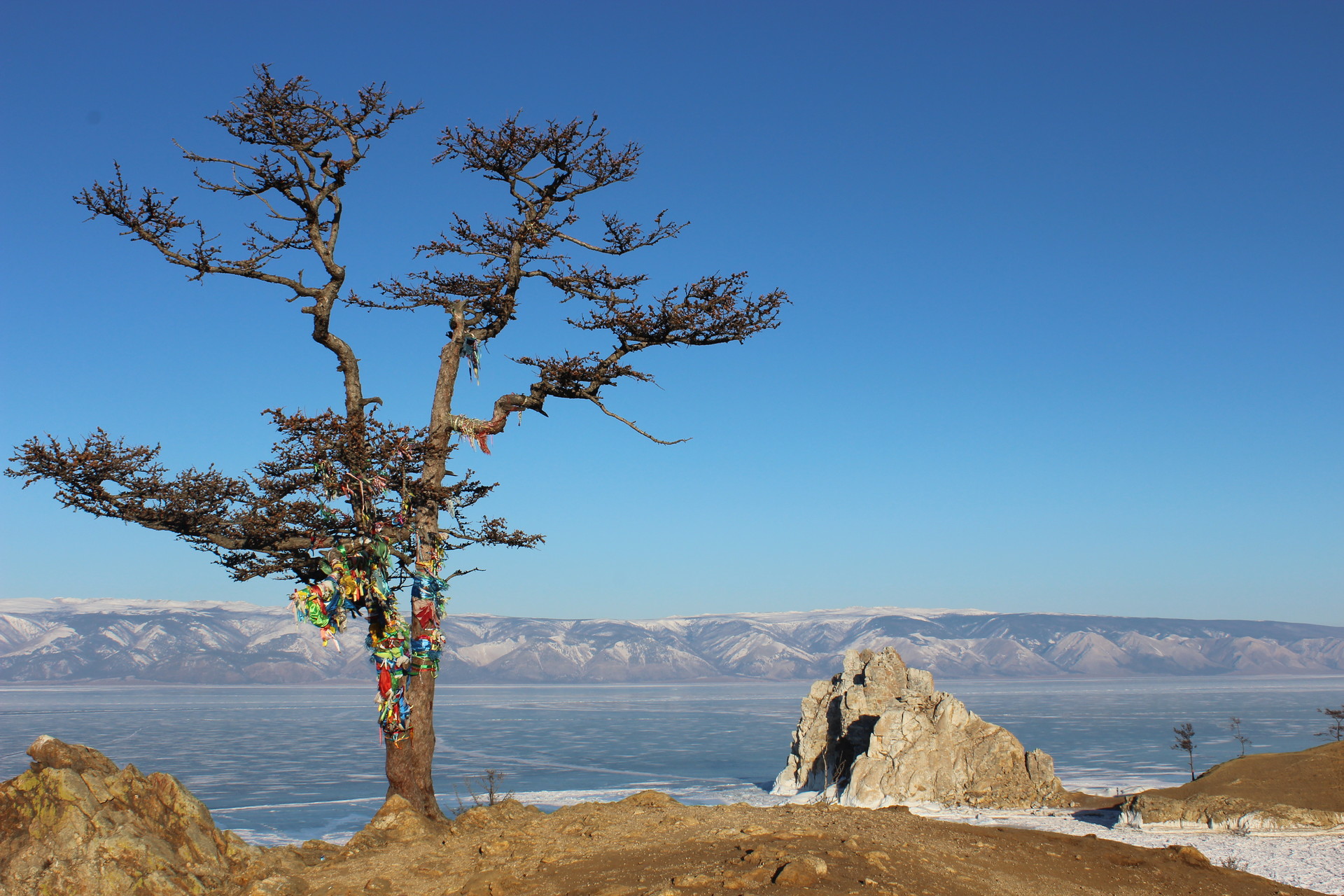 Valentin claims to know how to enter a trance, communicate with spirits, see the future, and identify people's problems at a single glance. "The traditional ancestral shaman is at once a priest who performs rituals, a soothsayer who predicts the future, and a witch doctor who treats illnesses," he says.

His manner of speech changes instinctively when the topic turns to legends and folklore. The fractured, illegible voice levels out, becoming low and muted, almost mesmeric: "The dome of our temple is the high sky. And the land is our home, nature is the universe." 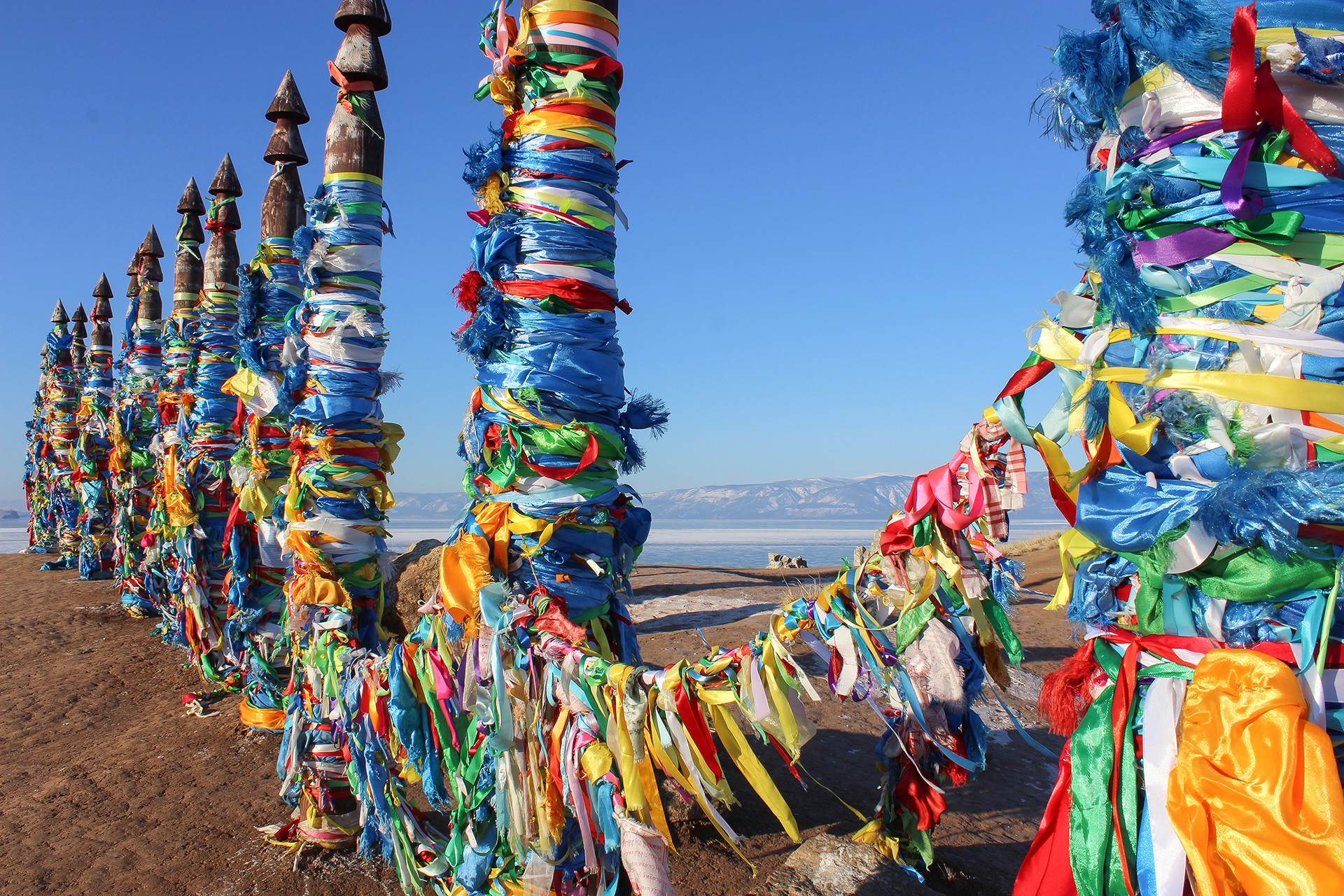 He dislikes the Orthodox Church and Islam for implanting faith, and despises "new" shamans for discrediting true followers of shamanism: "The new shamans live in cities and spend their whole time receiving 'clients.' It's about money, money, money, money..."

Khagdaev says that he was consecrated as a shaman by elders after the death of the last shaman in his family line: "Everyone remembered that my grandfather was a shaman."

The aforementioned 50-year-old Mikhail Ogdonov, Valentin's fellow shaman on Olkhon Island, says he was chosen as a result of "shamanic disease."

"I've been in some terrible accidents. I've been shot at, attacked with a knife," Ogdonov says. 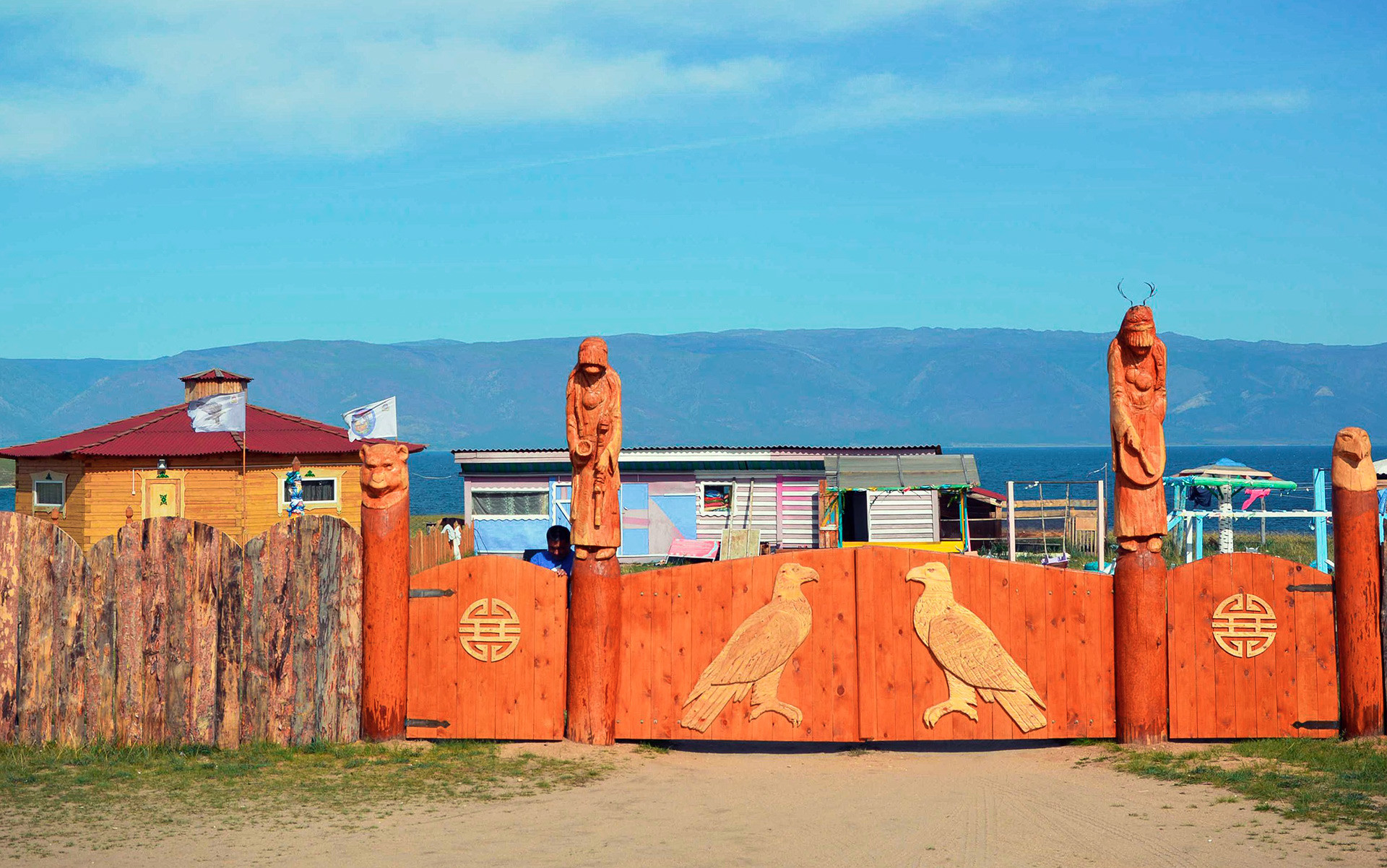 Before being consecrated as a shaman at the age of 38, Ogdonov served as a police officer. The hazards of the job might provide a rational explanation for all the scrapes he got into, but he is sure that it was a case of "shamanic disease."

It is a widespread belief on the island that ordinary people do not want to become shamans. The “chosen ones” are forced down this path by spirits who plague them with troubles and illness until they realize their true vocation and accept it. 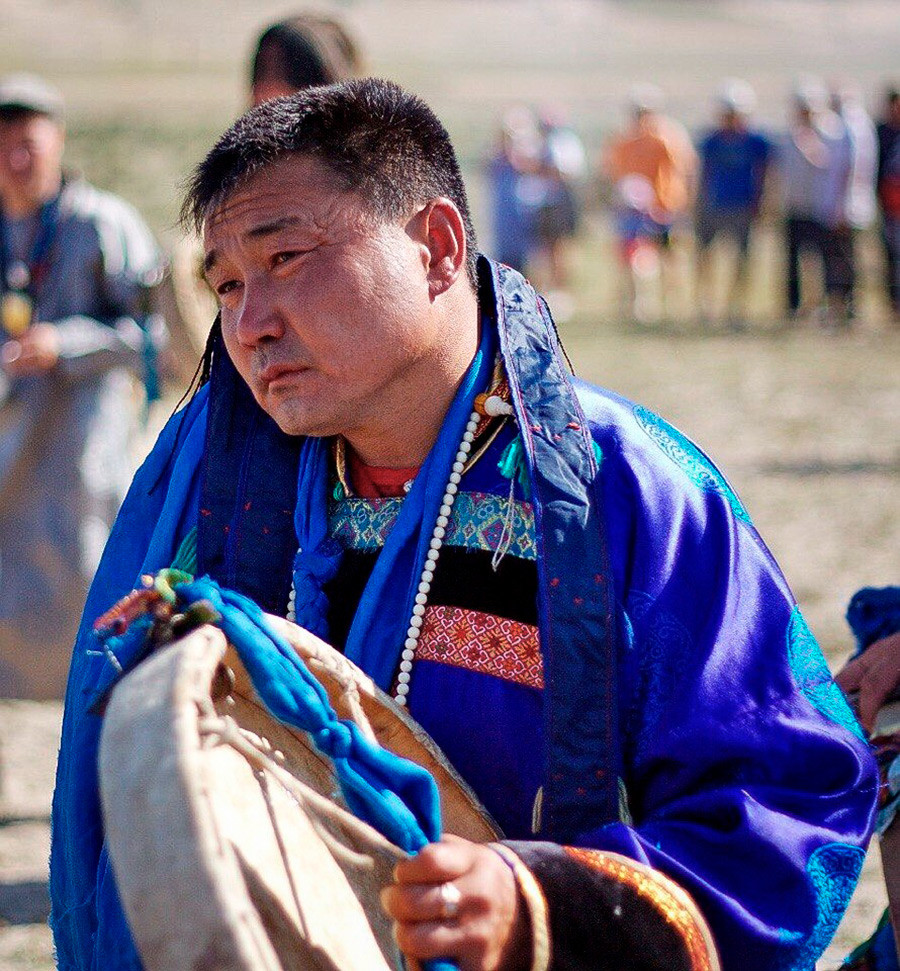 "Shamanic disease" is a very vague concept with no common consensus on the island as to what it is, save for the fact that it exists.

"Nobody ordinarily wants to be a shaman because it's a very difficult path. People are guided down it. Sometimes this guidance comes in the form of illness or hearing the voices of one's ancestors," says Svetlana Shataeva, 46, head of Olkhon's library. "A doctor might say it's schizophrenia. But Buryats go to see a shaman who says that the chosen one's ancestors are calling for their family line to have a guide to the other world."

Ogdonov claims to be such a guide, able to enter a trance, channel the spirits of ancestors, lift curses and spells, cure diseases up to and including cancer, and exorcise evil spirits. "The soul is sometimes inhabited by all kinds of evil spirits: devils in the form of dogs, deer, etc. It causes suffering in the possessed soul," says the shaman.

Ogdonov says that he is a descendant of "ongons" (ancestral spirits) and became a shaman after a three-day ritual in the wild deserted part of the island, where he entered a trance and sacrificed a ram. He harbors a mutual dislike for Khagdaev, accusing him likewise of exploiting the tourists who flock to the island less for the unspoiled nature of Baikal than for the mysticism and otherworldly sensation that imbues the place.

In the world of spirits

The shop assistant processes everything without blinking an eye. "For a ritual?" she asks knowingly. Many people go to the village shop next to Khagdaev's house with the exact same shopping list. 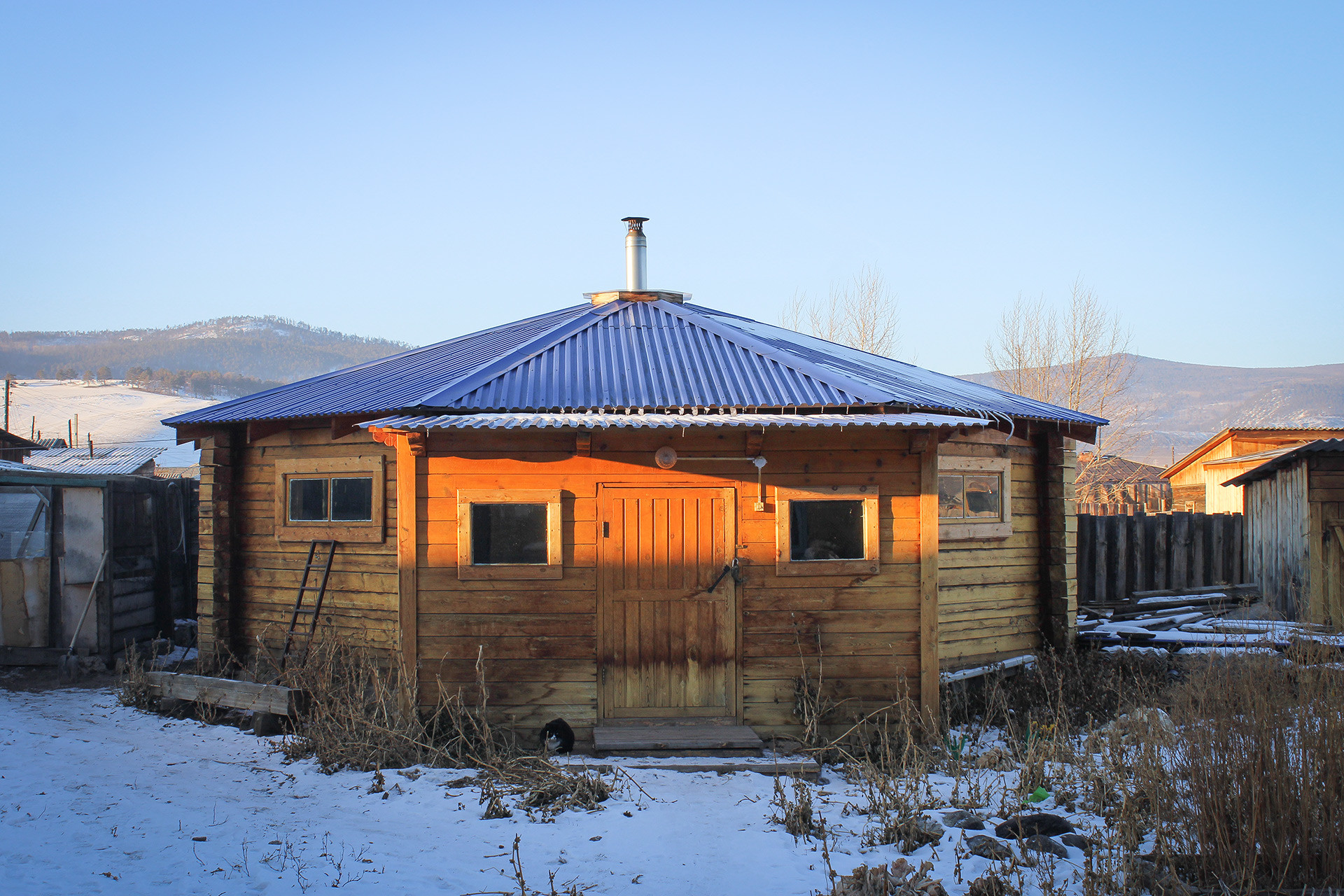 Save for a handful of young people, everyone who lives on the island and in the vicinity believes in the otherworldly powers of shamans. Even the youthful scepticism is explained away by the locals:

"Today's youngsters don't believe in shamans. They're all atheists. Even the ones who’ve just come in," says Vladimir, a 46-year-old seller, pointing at three young guys buying beer. "What problems do they have? They haven't tasted life yet or had any serious problems. But that's the sort of stuff people see shamans about."

Khagdaev is waiting for the food on the porch of the wooden yurt, which he built specially for shamanic rituals. He is dressed in full shamanic gear: a red-and-blue robe, a “reflector" against bad energy and evil forces hanging around his neck, holding a shamanic tambourine decorated with pictures of animals, birds, people, trees and celestial bodies. He invites his audience to enter the yurt where the ritual is to take place. 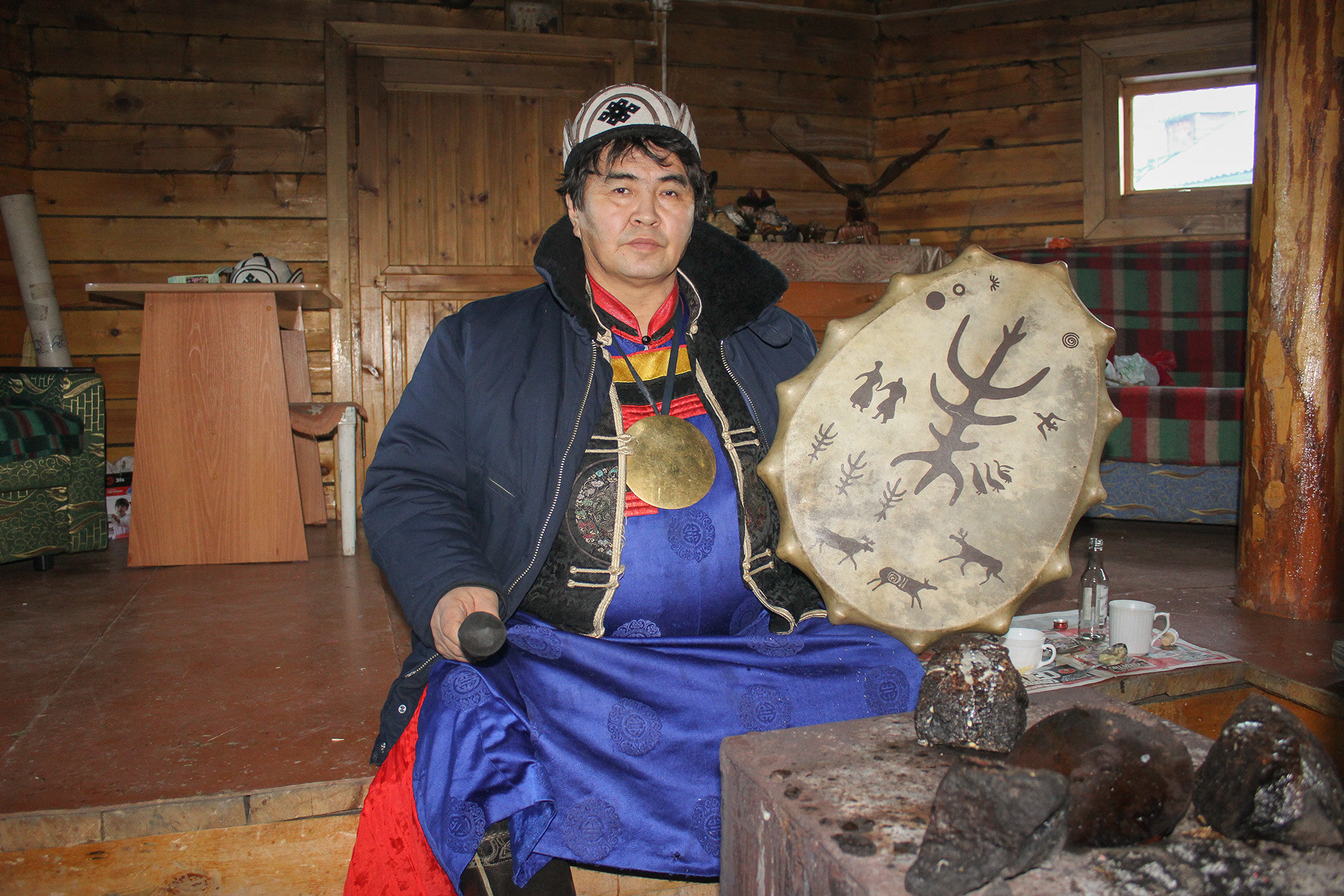 Sofas line the walls, one of which boasts a picture of Genghis Khan armed with bow and arrows, holding a scroll. The yurt is full of old items and plain rubbish: pictures with mystical motifs and animal hides vie for space with dear-antler headgear, dusty pillows, old rags and newspapers. The shaman orders the stove to be fired up.

The ritual begins only when the fire is well and truly blazing. Khagdaev places three stones, each the size of a large fist, on the top partition of the metal stove, so that they form an inverted triangle, and sprinkles some kind of dried herb over them.

On a scrap of newspaper to his left lie the food products from the store, plus two spoons with frozen lumps of animal fat and two dirty cups. "Pour some vodka into one glass and milk into the other." 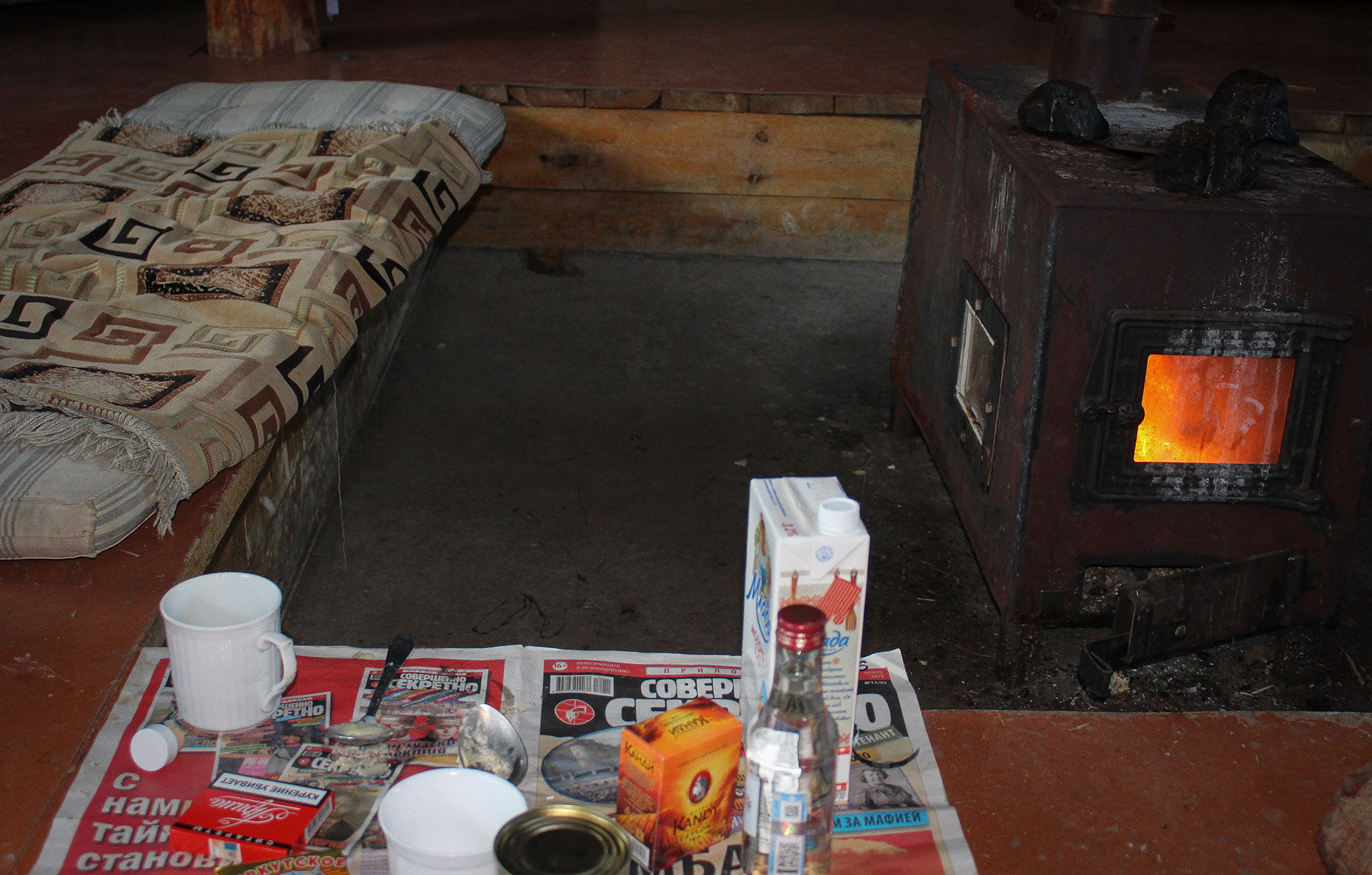 "On a scrap of newspaper to his left lie the food products from the store, plus two spoons with frozen lumps of animal fat and two dirty cups."

Before filling the glass with vodka, the metal ring around the bottle neck needs to be removed, "otherwise there will be an obstruction." The tin of meat is opened with a long blunt knife, kept specially in the yurt for the ritual. The blade goes in and meat liquid flows down his hands. The shaman orders everyone to sit down nearby and starts up the mantra to the rattle of the tambourine: the invocation of the spirits has begun.

Cigarettes, plus tea and butter, are set ablaze together with their plastic wrapping. Pieces of stewed meat, extracted with a dirty spoon, also descend into the flame: the spirits accept the offerings.

When the cigarettes drop into the fire, the shaman orders the onlookers to bend over the stove and breathe in the vapor of the tobacco and the dried herb, which has already begun to smolder on the hot metal. "Walk around the oven three times," he commands.

When the shaman pours vodka directly onto the fire, the flame flashes up spectacularly to the dome of the yurt. The hypnotic shamanic singing, monotonous tambourine and intoxicating vapors of the tobacco and mystery herb lead the seeker of truth through the gates into the spirit world.

"Form a circle, follow me like this," says Khagdaev, and starts winding his way clockwise around the oven. All of a sudden, he stops abruptly, turns around and says: "You must give three thousand."

These unexpected words shatter the mysticism of the spirit world in the mind of the seeker, and Khagdaev shakes the sacrificial banknotes over the fire before pocketing them.

"The spirits have accepted your offering," he states with certainty. And with that, the rite is declared complete. 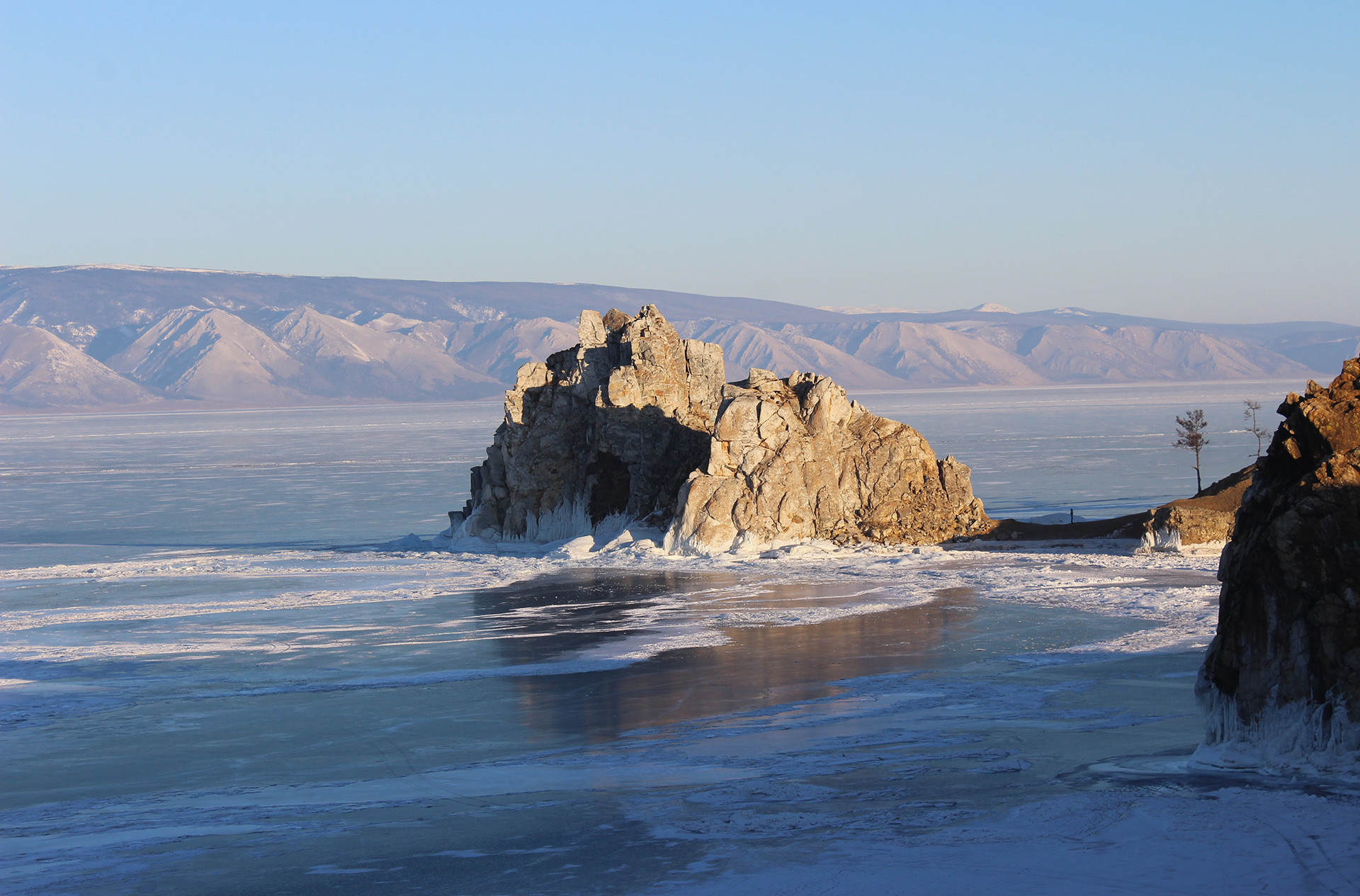 "Shamanka" rock on the Olkhon Island.

Waiting for a minibus from Elantsy village (where shaman Khagdaev lives) to Olkhon Island (shaman Ogdonov's territory), the locals stand under the dark blue sky dotted with bright stars, and discuss belief in shamanism.

"I believe in shamans. I myself saw a Buryat, a female shaman. I had problems in my life... I don't want to talk about them. I gave her milk and salt, and she took money, too. She laid out some tarot cards, spoke a lot about me and my problems. She burned a special herb. The problems went," says one.

"It's all a money-making circus," says another in reply.