Khanty-Mansiysk: What to do in this freezing city of the North (PHOTOS) 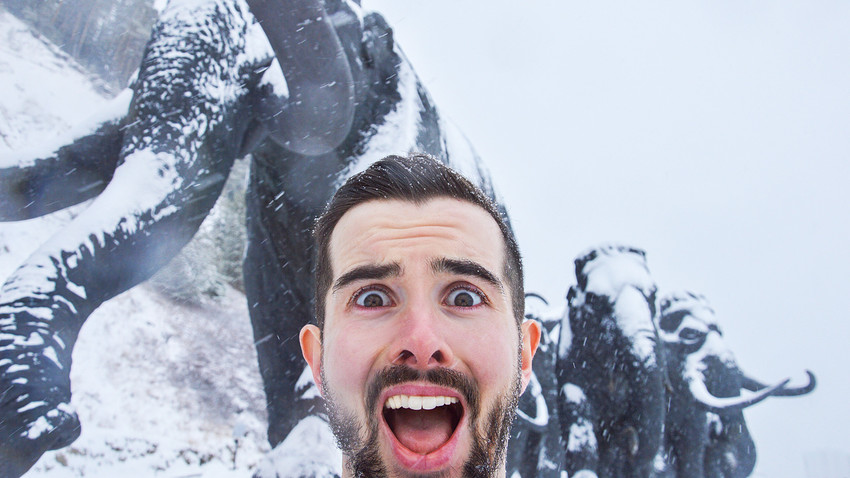 Erwann Pensec
Our intrepid French adventurer set off to Russia’s far north - and explored the harsh winter in this Siberian city, where mammoths once lived.

With tickets in my pocket, the, in my view, under-rated Khanty-Mansiysk (located 2,600 km northeast of Moscow) is waiting for me, and despite an initial cold impression, I was soon melting.

Khanty-Mansiysk is the administrative center of the Khanty-Mansi Autonomous Territory. The town of roughly 100,000 people lies on the Irtysh River, which flows into the nearby Ob River. 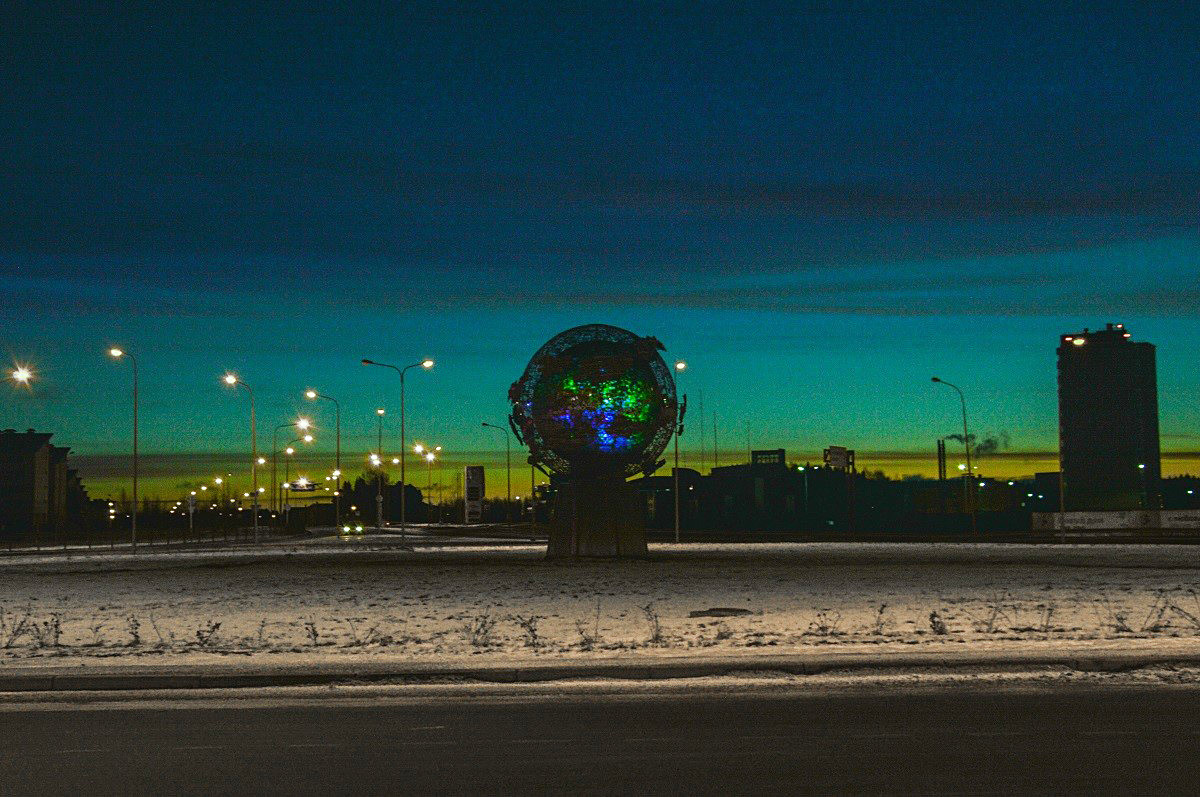 I must confess, my original intention was to discover the city adorned with autumnal shades. I didn’t pay attention to the weather conditions and the fact that Khanty-Mansiysk Territory falls into the climate zone of the Far North. I was hoping that, at the beginning of November, colorful roofs and foliage would blend harmoniously, but the snow had already blanketed everything. 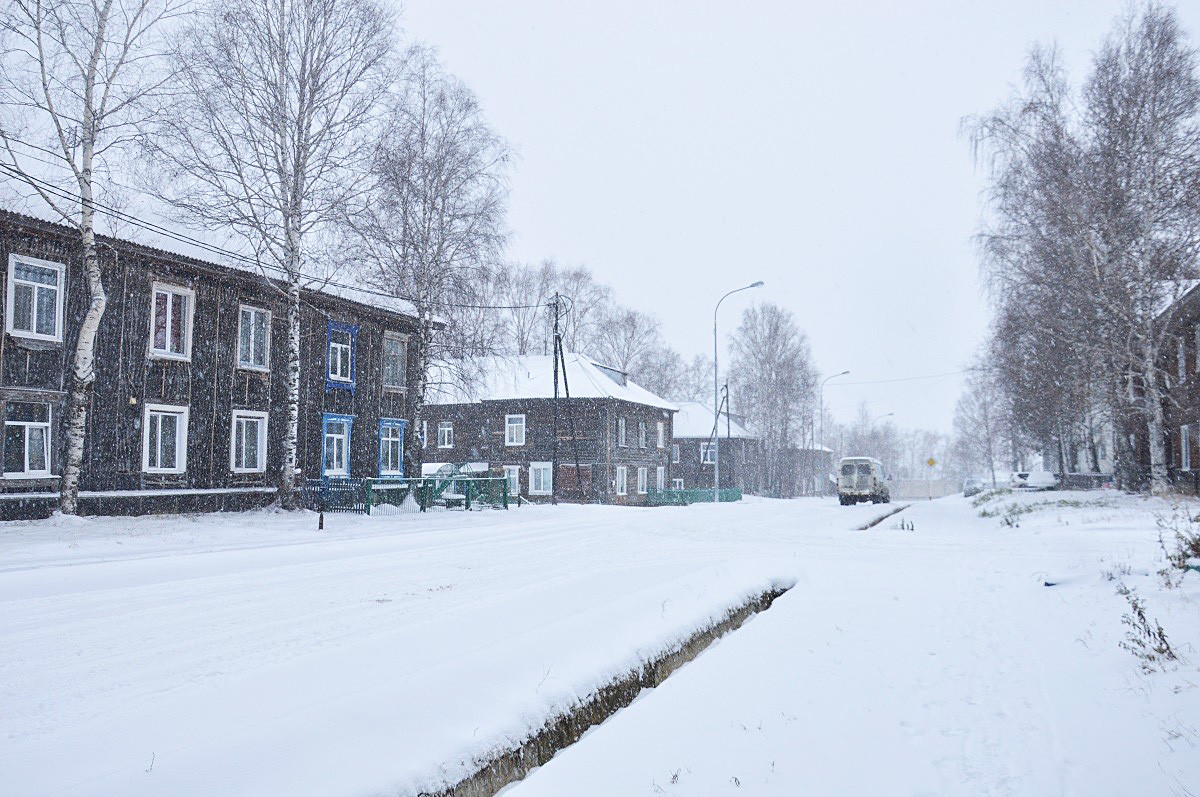 Early in the morning, after a sleepless three-hour flight from Moscow, I finally make my way out of the airport, only to find myself exposed to the elements – an icy wind and the silence of the night escort me to a bus that will allegedly take me to the city center in fifteen minutes. 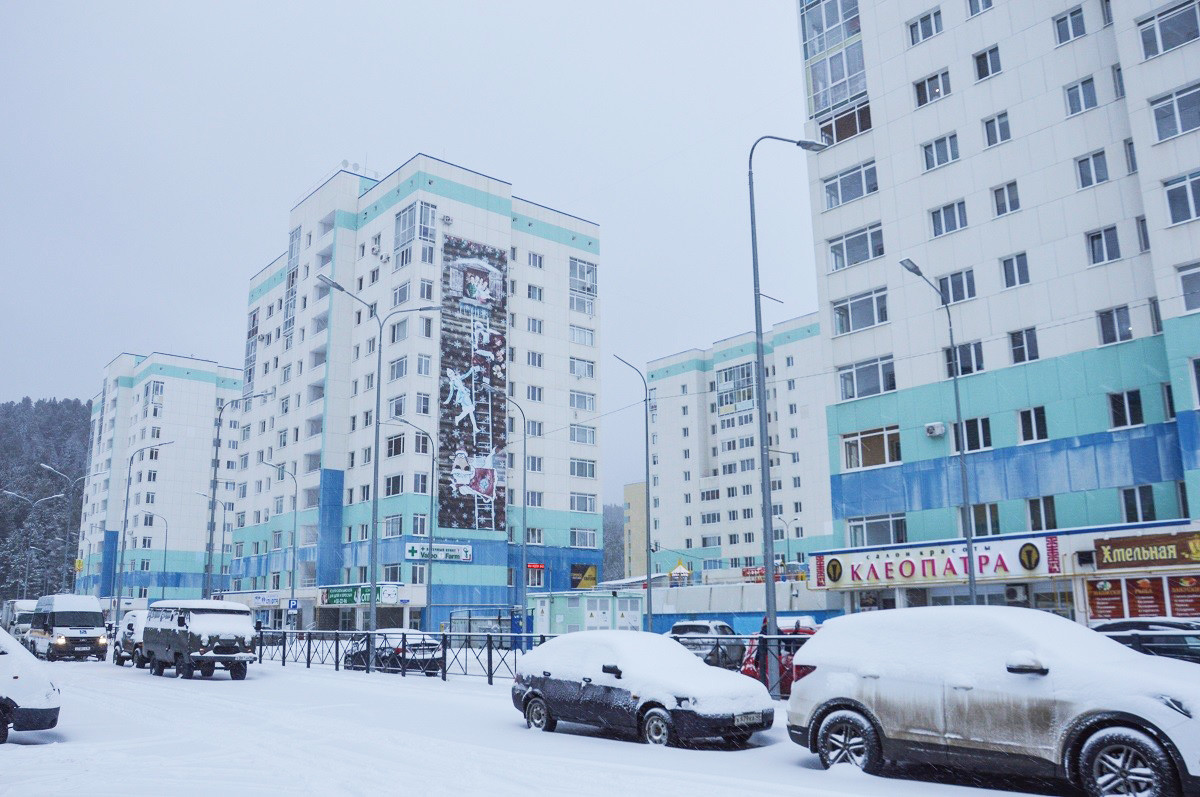 Although the first settlement was founded here more than 500 years ago, it was only in the middle of the 20th century that Khanty-Mansiysk started booming, due to the vast oil and gas reserves found in the West Siberia region.

It’s no wonder small wooden houses are today mainly surrounded by large urban buildings, often painted in different colors, which is common for many cold climate regions. This way, people can better identify the buildings in a heavy snowstorm. 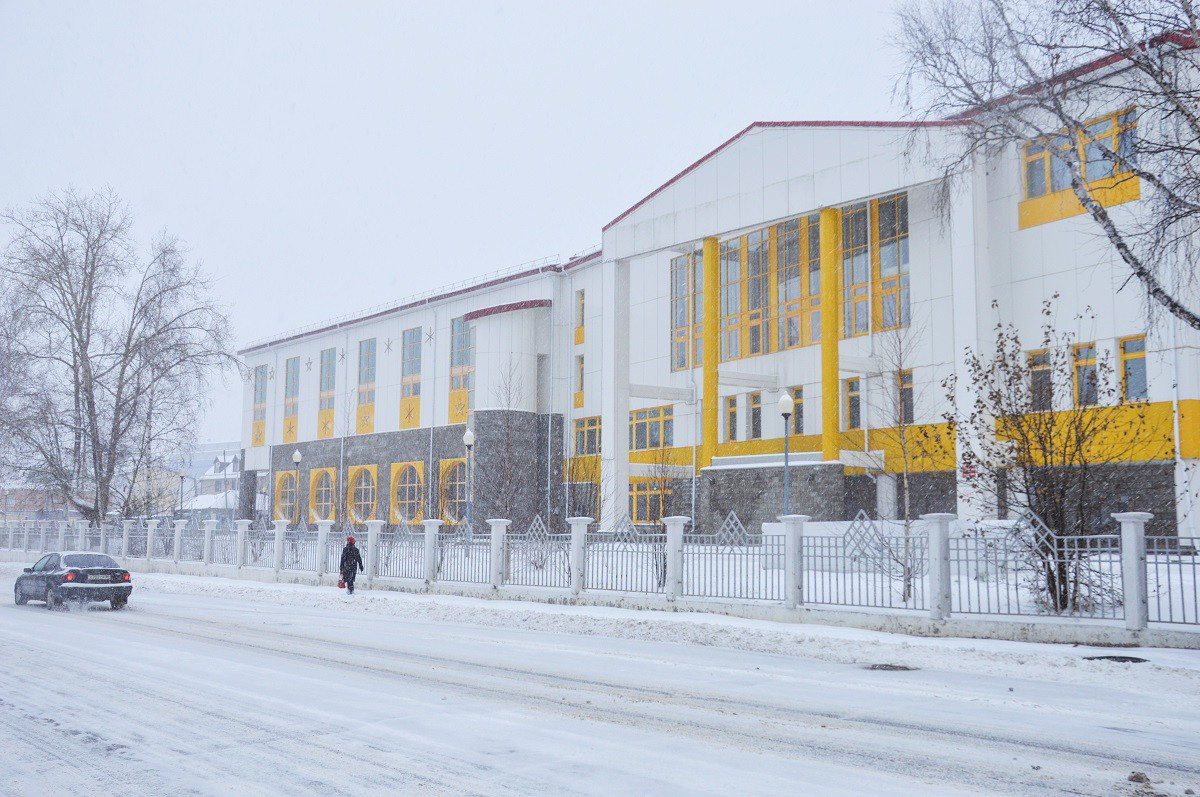 I feel my reconnaissance mission is similar to a polar expedition – my hair is frozen by the cold and ice forms on my beard. Despite this, I’ve managed to arrive at the Torum Maa Open-Air Ethnographic Museum. 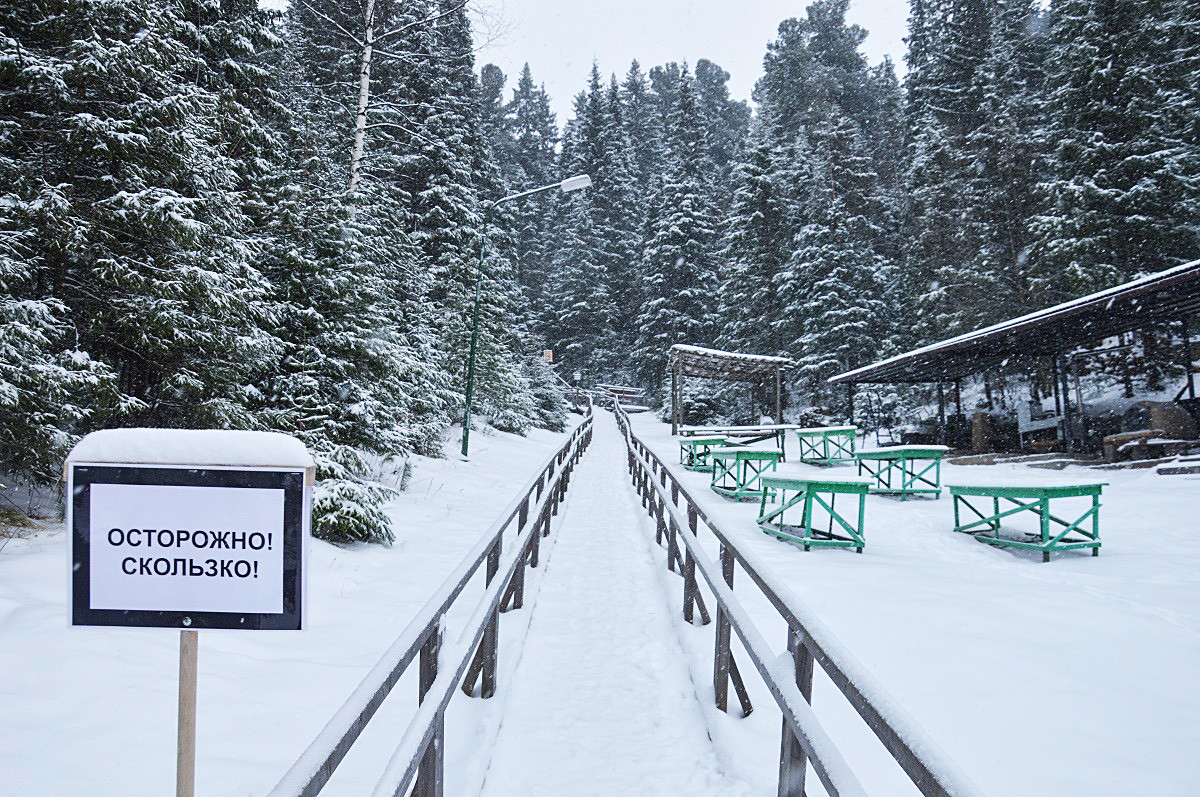 A wooden dock leads me across a coniferous forest to some typical constructions and installations of the Khanty and Mansi people, who, long ago, would hunt, fish and breed reindeer. 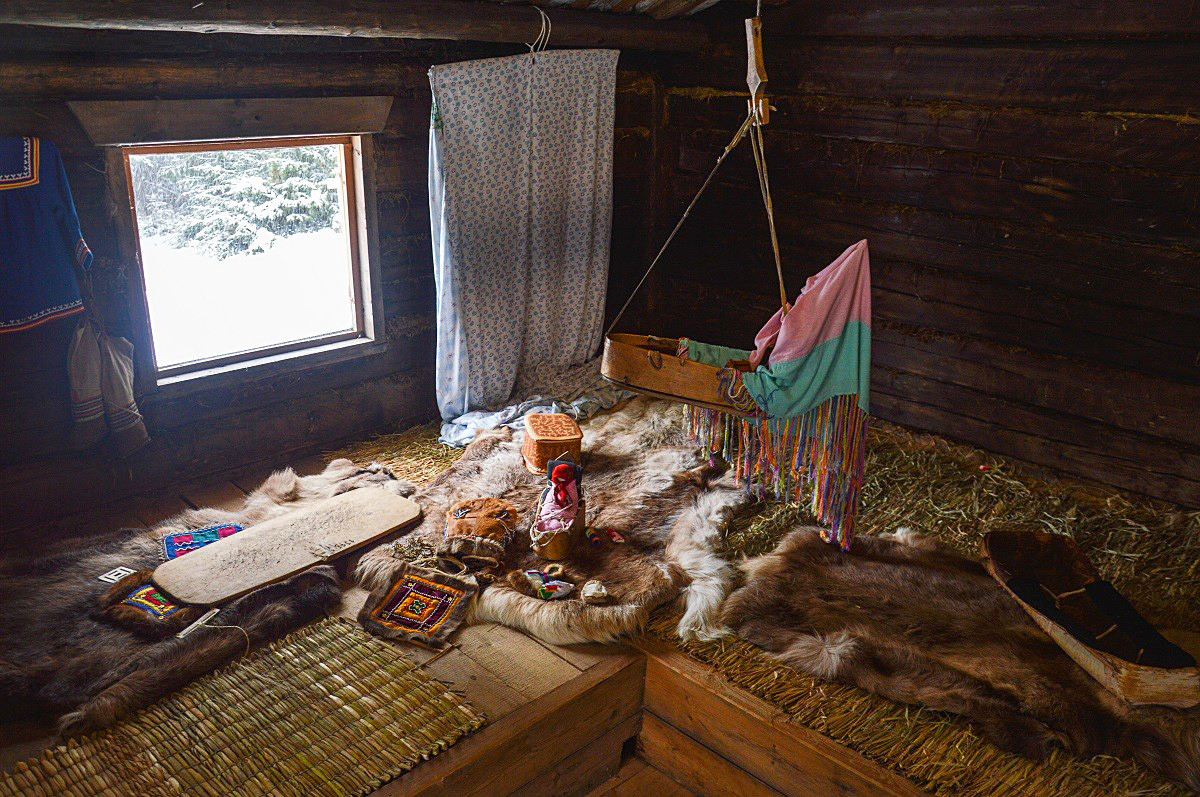 These people followed ancient shamanic traditions. In the middle of the pine forest lies a sanctuary offering shelter to ancient idols and colorful ribbons. 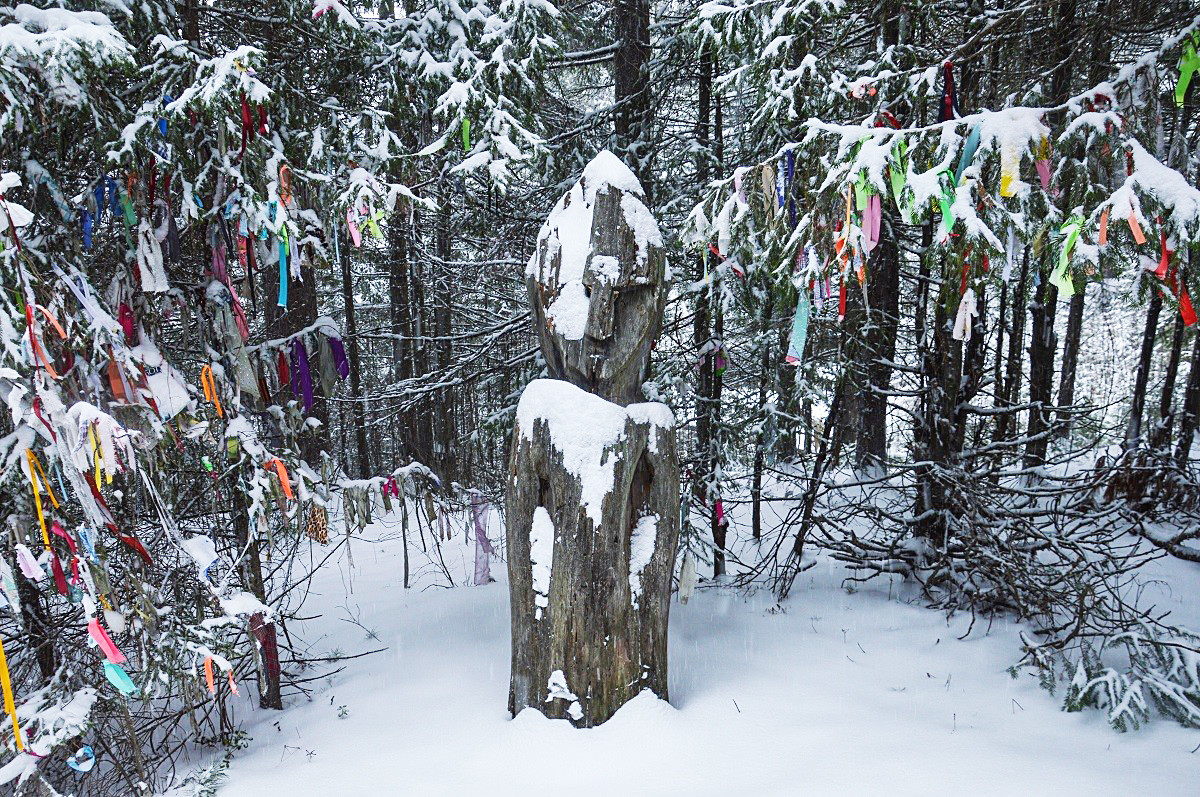 The city is cut in half by the Samarovskiy Chugas Natural Park. I decide to avoid the park and walk along the banks of the Irtysh River. I squint my eyes, defying the blizzard, and I am confronted with a monochrome landscape – there is no horizon, only snow, and thick, white fog. 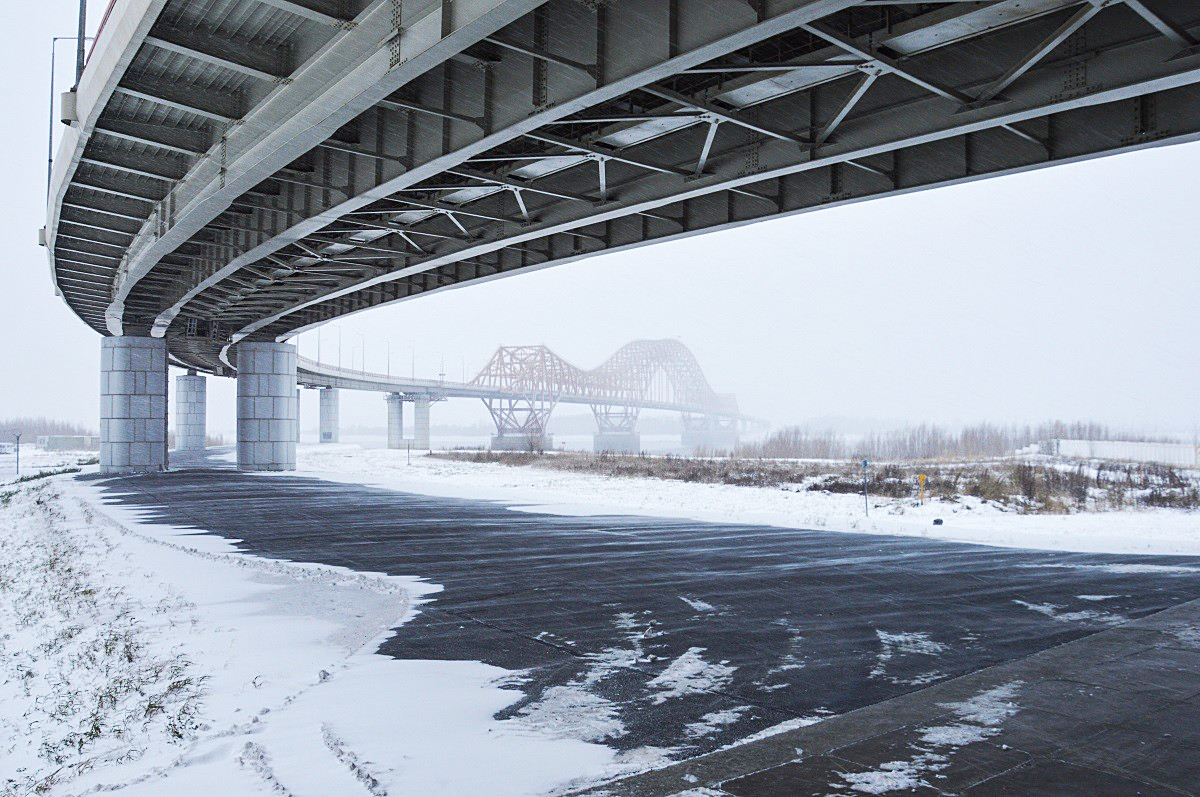 I then come into sight of the Red Dragon, as they call it here. The bridge is considered one of the most beautiful in Russia and offers a breathtaking view of the surrounding area. And as ice is forming on my cheeks because of a strong wind, I hurry down to protect my face. 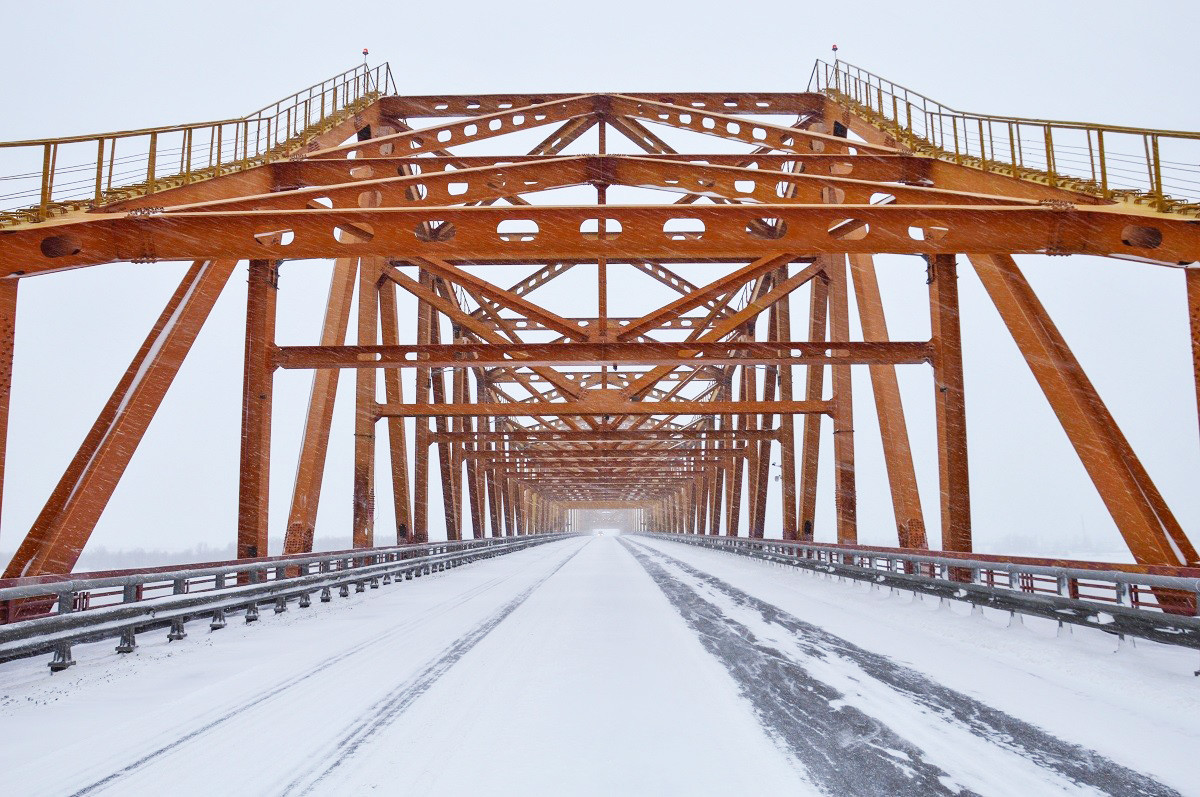 Braving the elements, I continue my journey along the train tracks and feel the sensation of pure escapism. Yesterday – I was sitting in a warm office. Today – I’m experiencing an adventure in the most inhospitable environment. Flee comfort, break from the routine!

Suddenly, out of nowhere, gigantic shadows deepen on the white canvas, and I come face to face with iconic creatures of Siberia: a herd of full-scale mammoths! 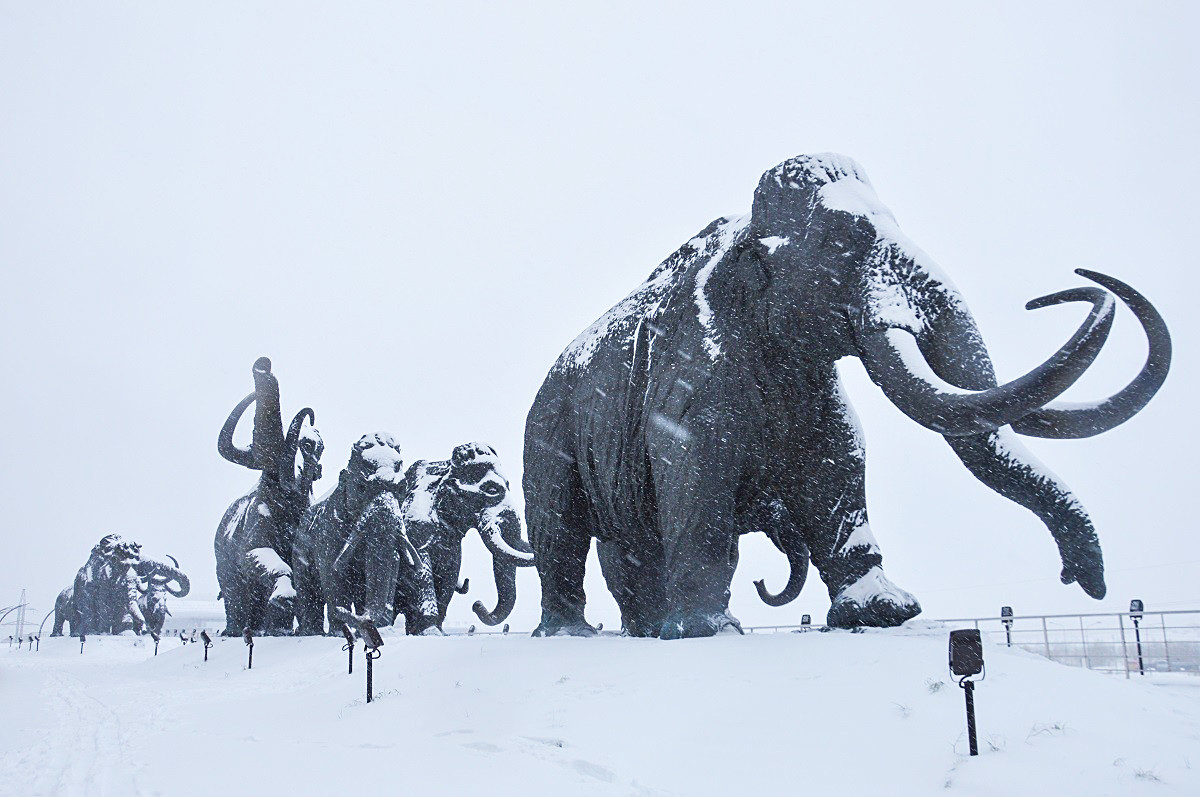 ‘Archaeopark’ is part of The Museum of Nature and Man. Among the exhibits are sculptures of different animals, which used to live in the region several thousand years ago. The museum is considered a symbol of the city and a very popular attraction. I was watching those wooly giants in awe for a long time and even forgot the bitter cold. 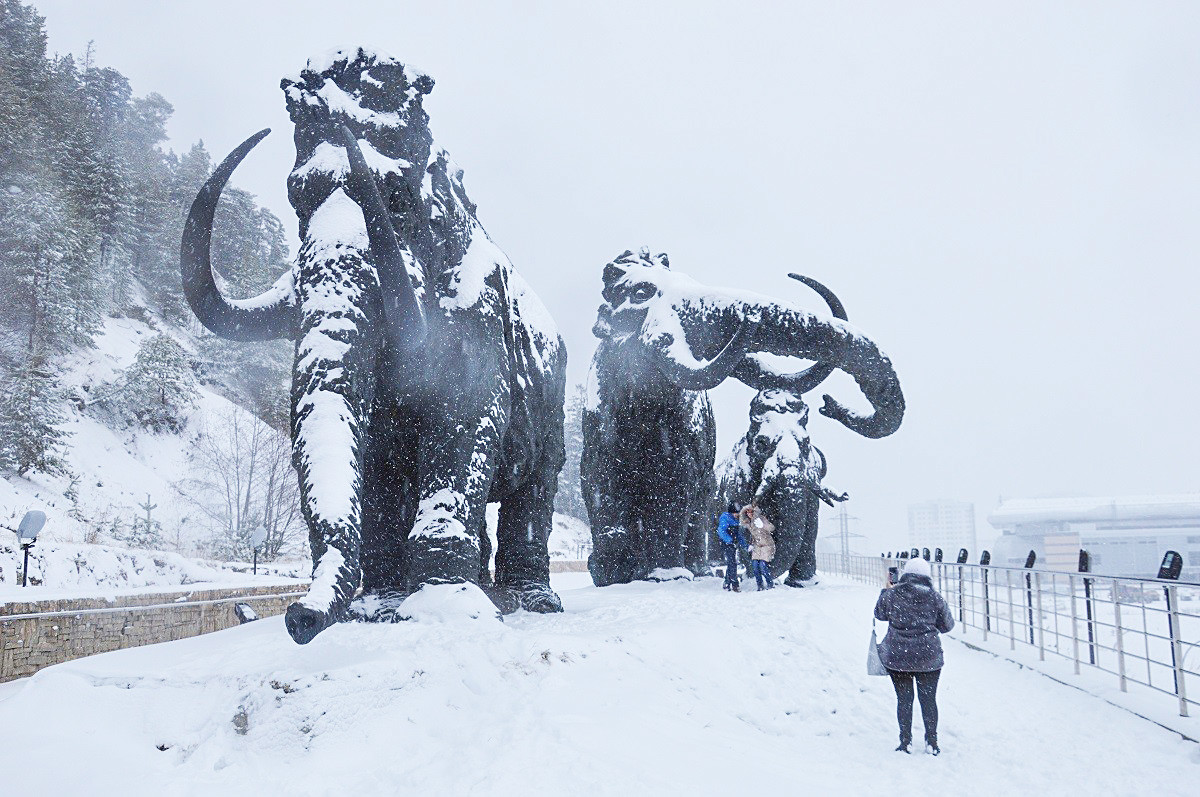 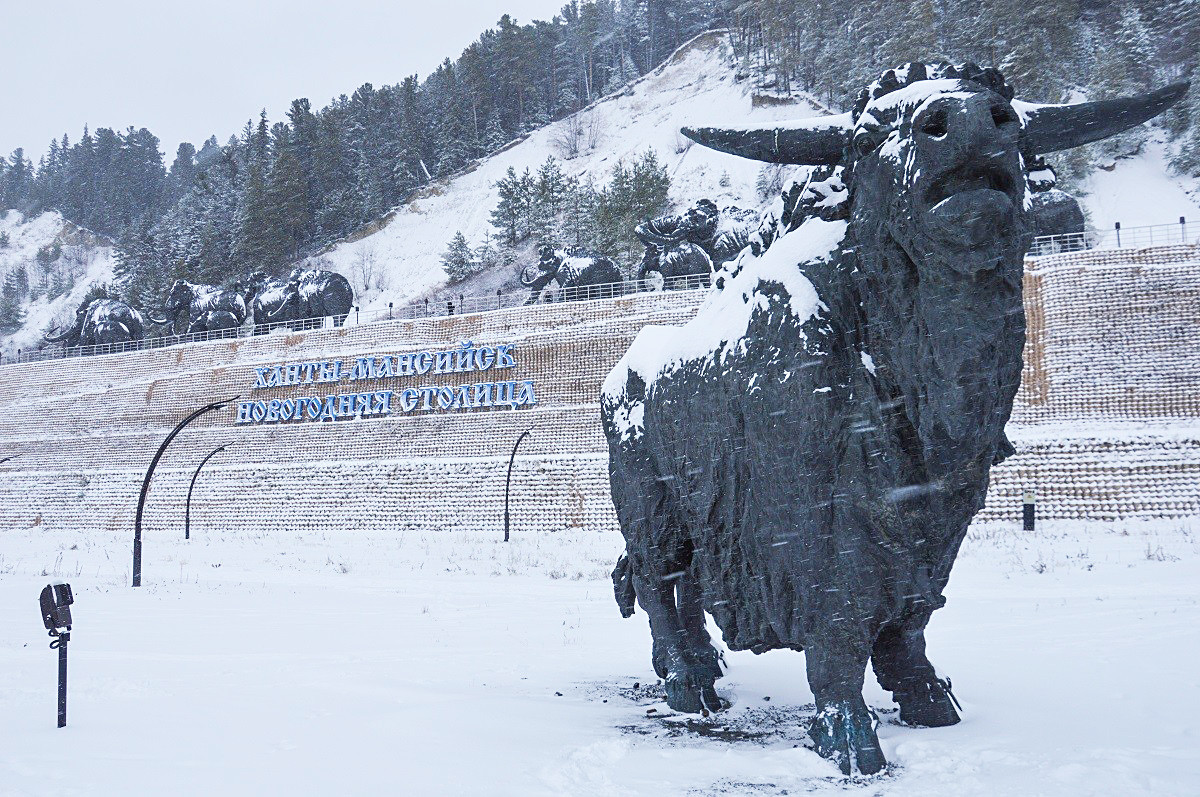 Next to the site are several newly built sports venues: Arena Ugra, an indoor sporting complex, a water park, as well as ski slopes for biathlon, where two biathlon world championships were held in 2003 and 2011. Because of this, Khanty-Mansiysk claims the title of sports capital of Russia.

After a long day walking, I get back to my hostel, exhausted. But as soon as I arrive, tattoo artist Artyom, whom I met yesterday, his wife and their friend invited me for a night out that I now recall as probably one of the best I’ve had in Russia, so far. We decide to go sledding in the forest - in the middle of the night! After countless slides, rolls, crashes, and giggles, as well as lively conversations and a few beers drank, the three of them invited me to a little get-together they are planning during the January holidays – I give them my word. 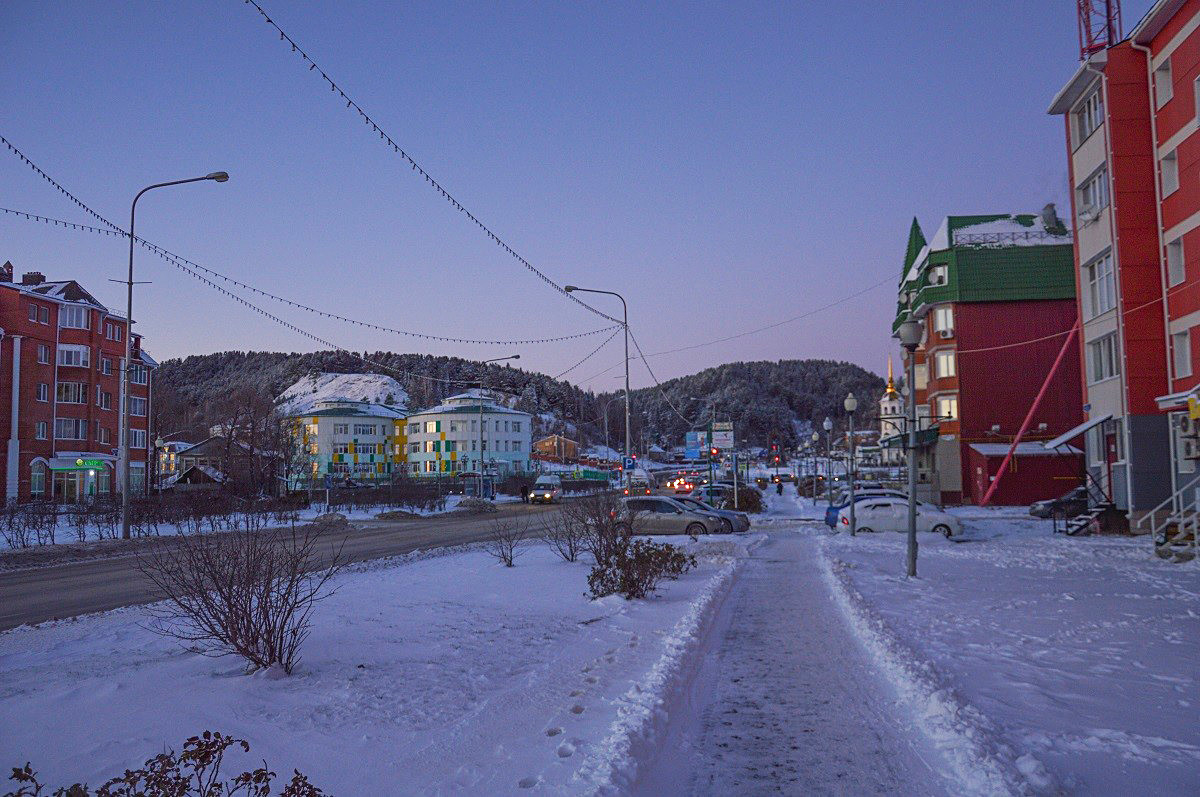 For my last day in Khanty-Mansiysk, the weather is absolutely perfect; my journey continues under a radiant blue sky. The city is very clean and you’ll find many futuristic buildings, such as the Academy of Chess (pictured below). The town also held the World Chess Championship several times. In Khanty-Mansiysk Territory, learning this classic game is mandatory in schools. 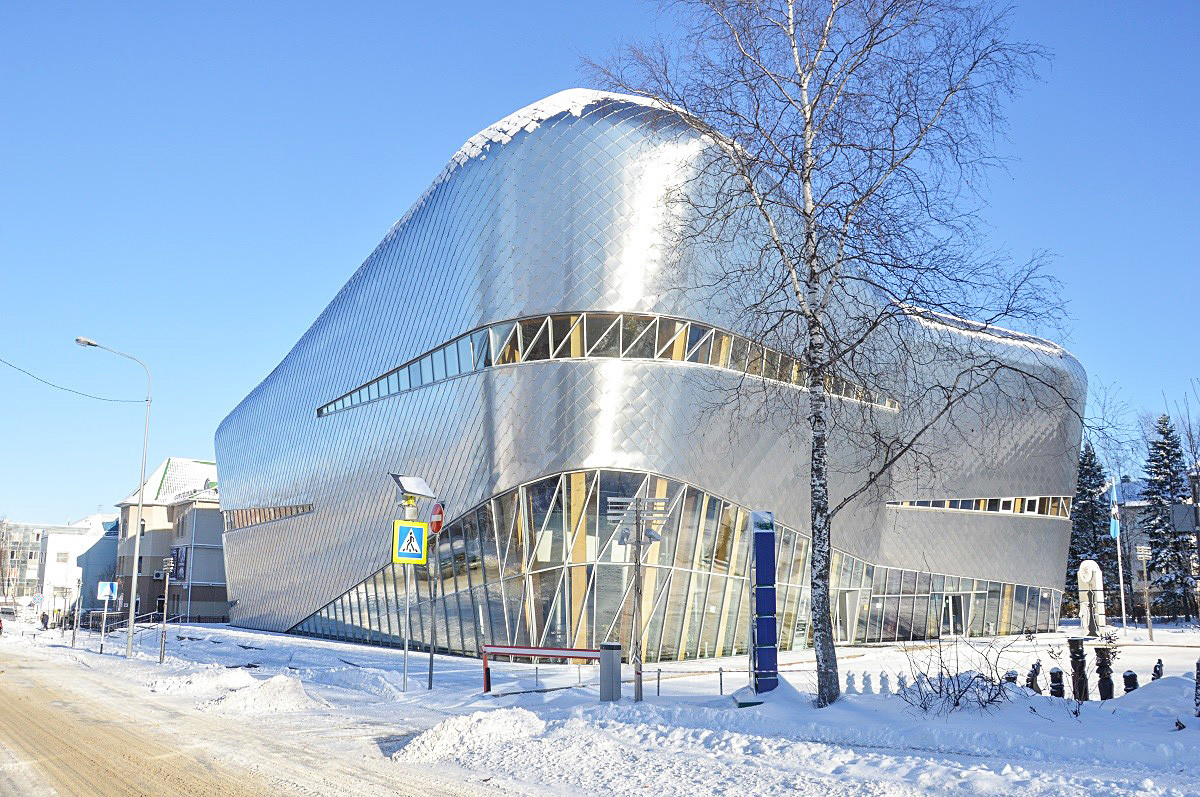 In the park pictured below, birches reign supreme and trollers can enjoy the beauty of Siberia in winter. 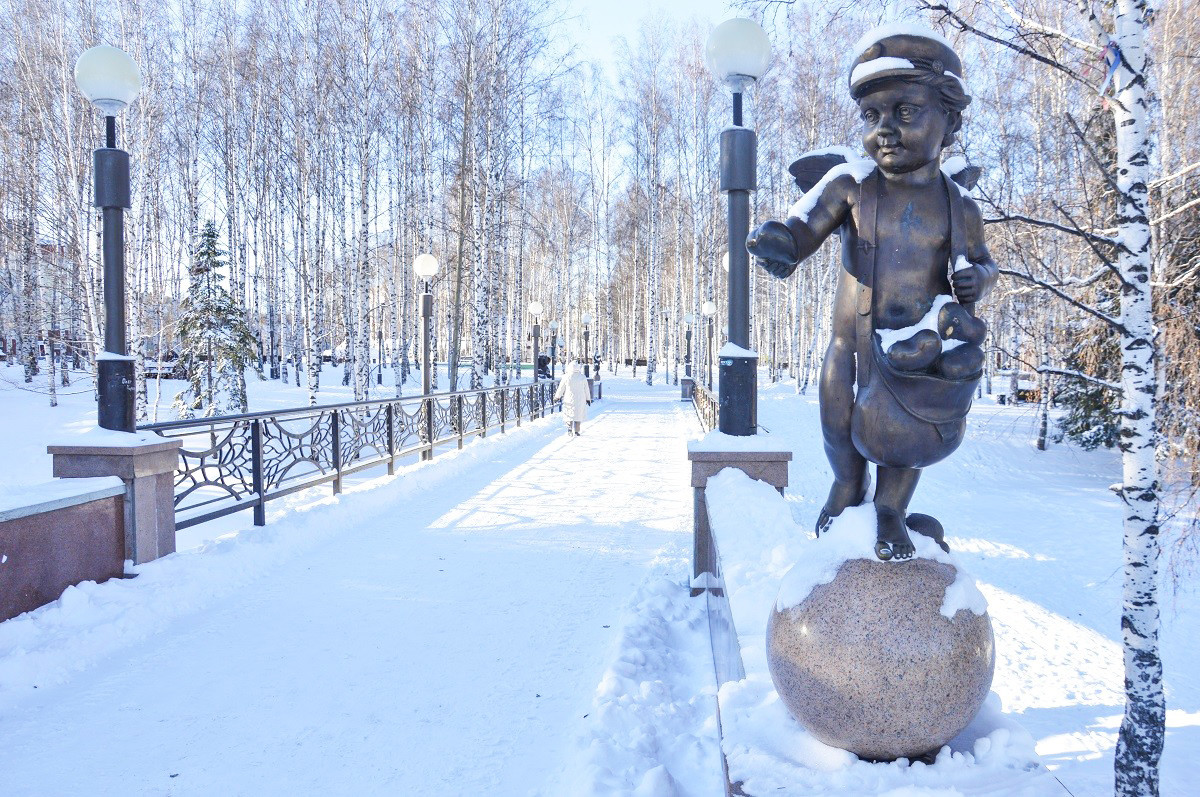 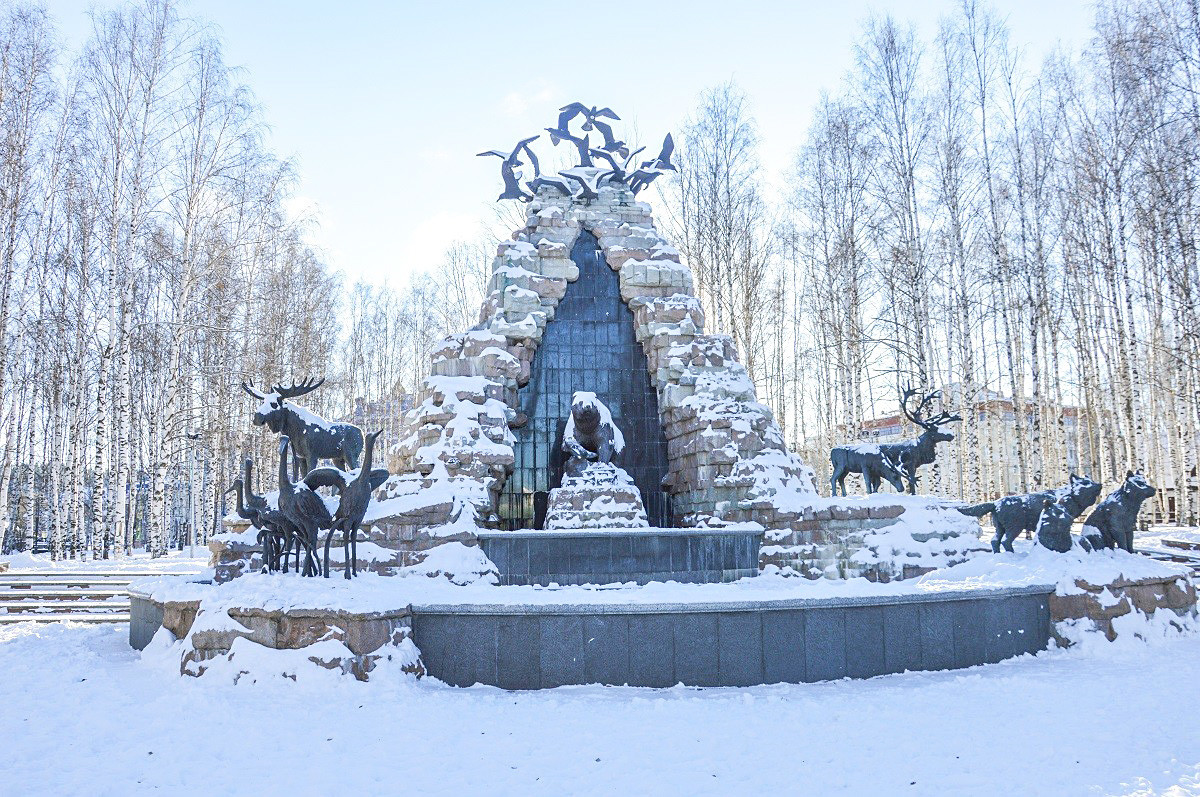 The central square looks like it comes straight out of a fairy tale – even children are riding in sleighs. 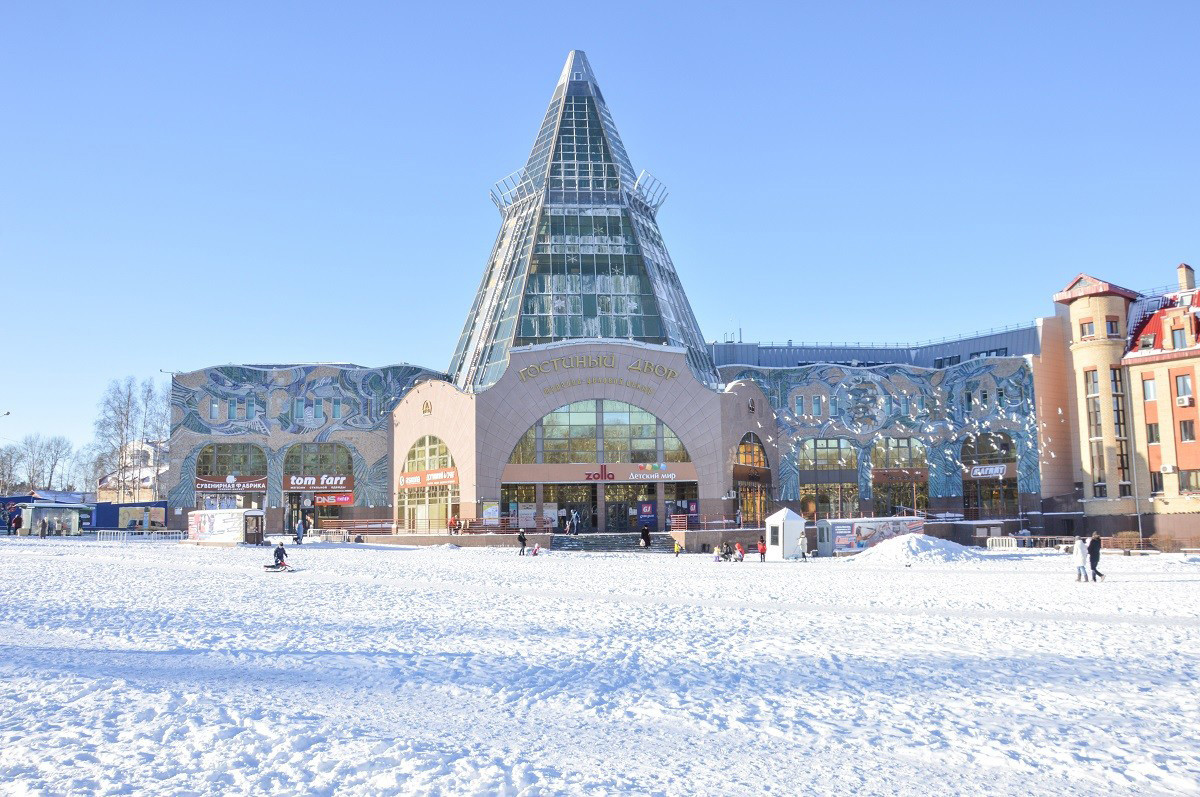 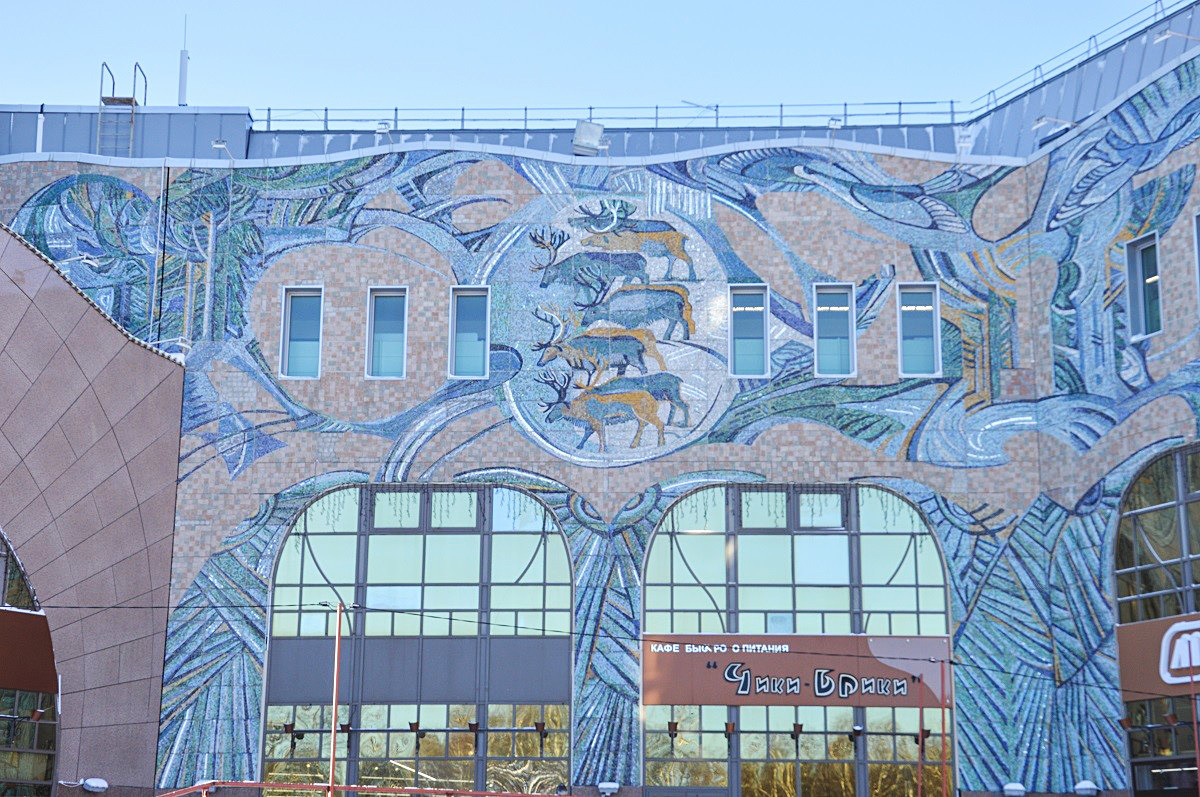 The Church of Christ’s Resurrection, which was built in 1999, is beautiful both inside and out. 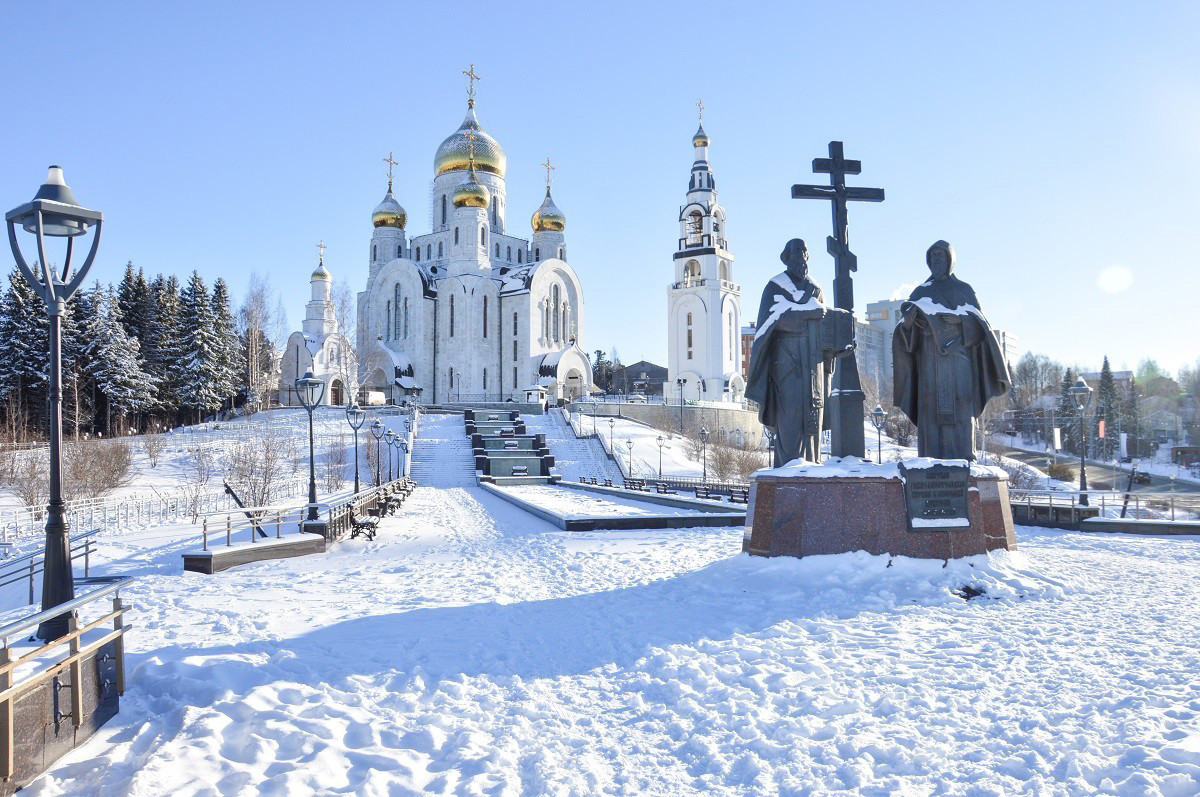 I follow the path from the religious complex to the south of the city and come across a monument to the conquest of Siberia. The legendary Yermak and other explorers indeed started to explore these eastern lands 400 years ago. 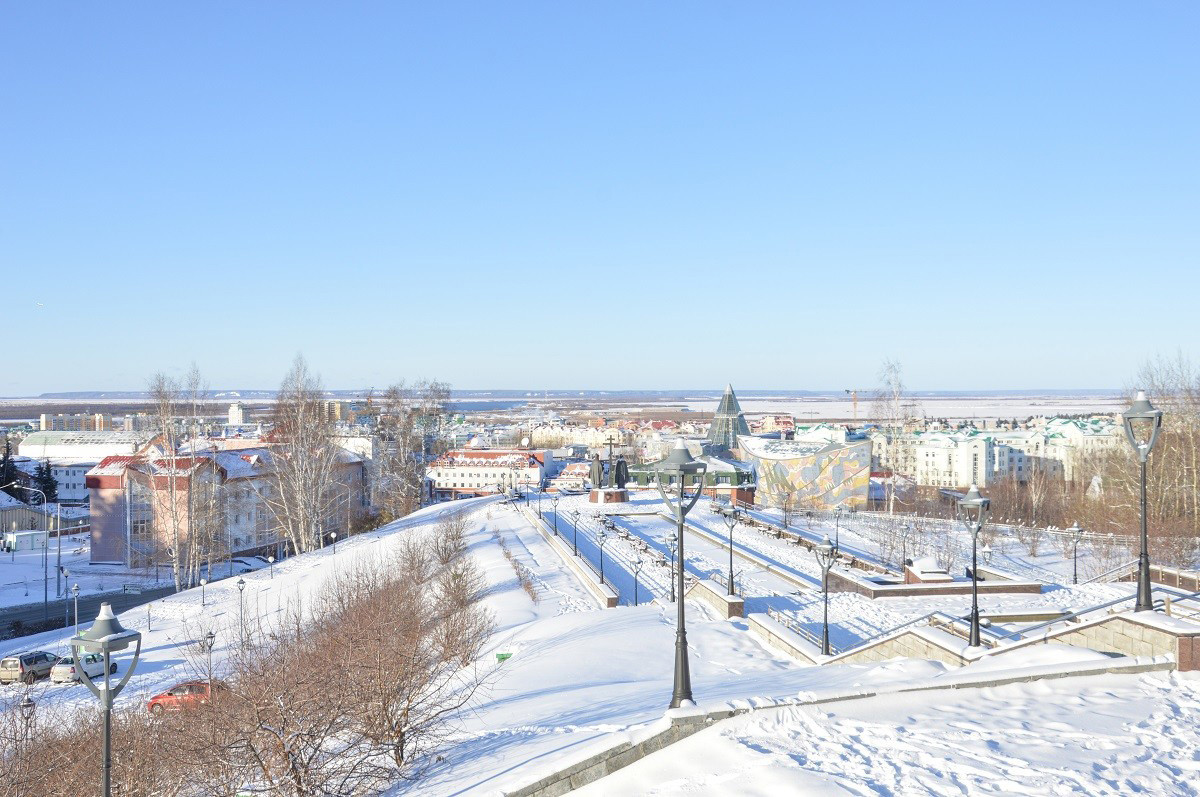 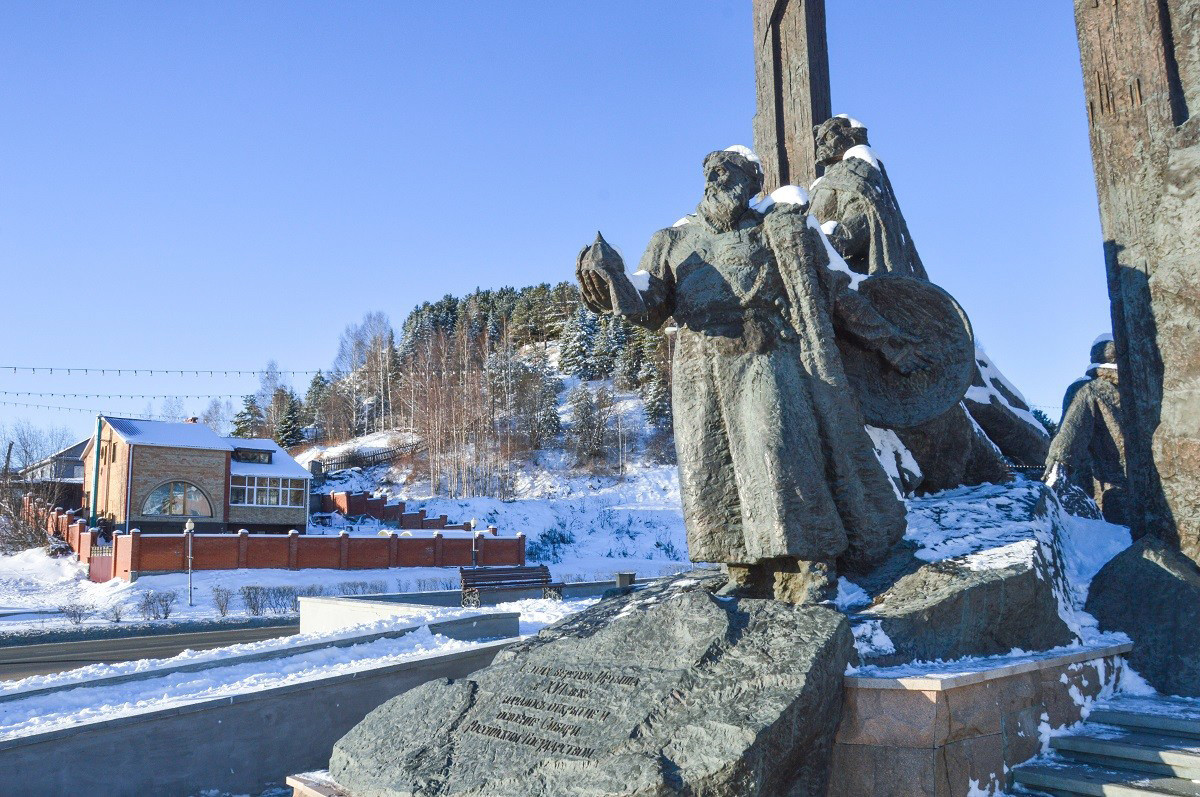 I then head towards a strange steeple hidden behind a hill. It is a pyramid-like construction, built in 2003, to commemorate the first explorers of Yugra, the historical name of the Khanty-Mansi Region. 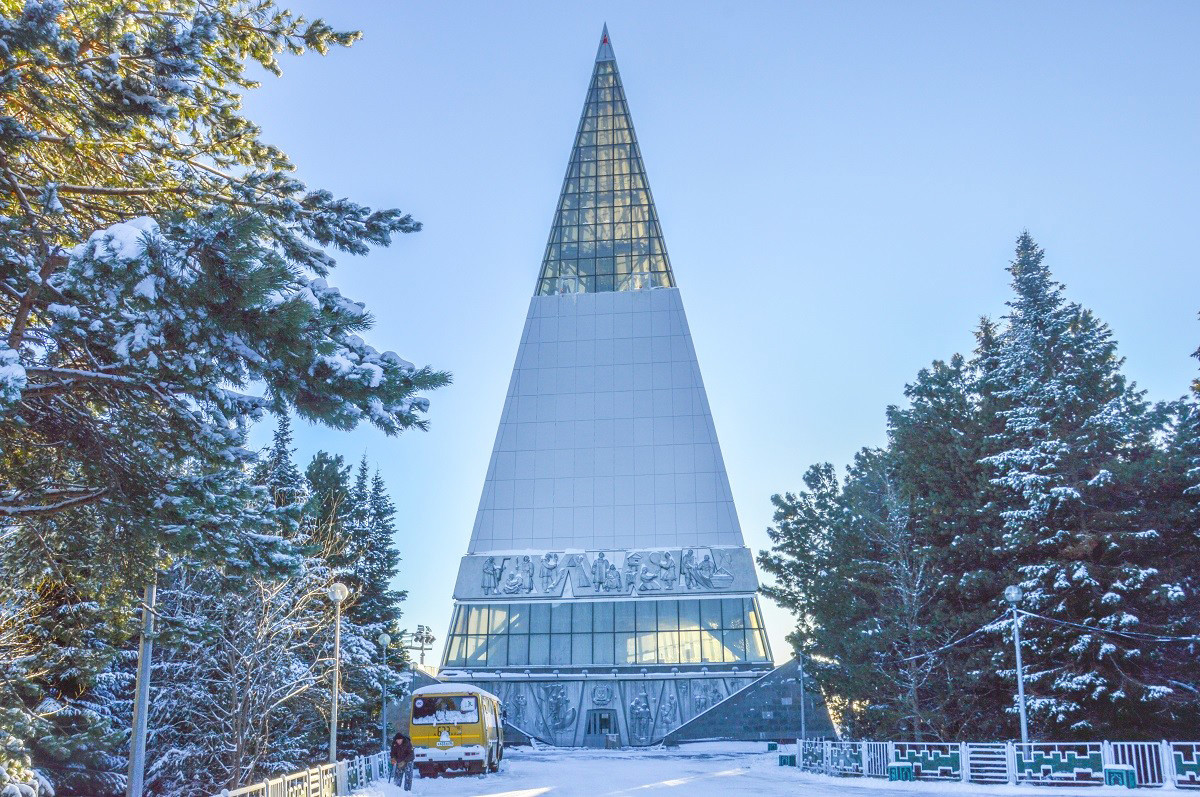 The view of the city and the wild horizon is splendid. For a second, I have no problem imagining myself in the Arctic wilderness. 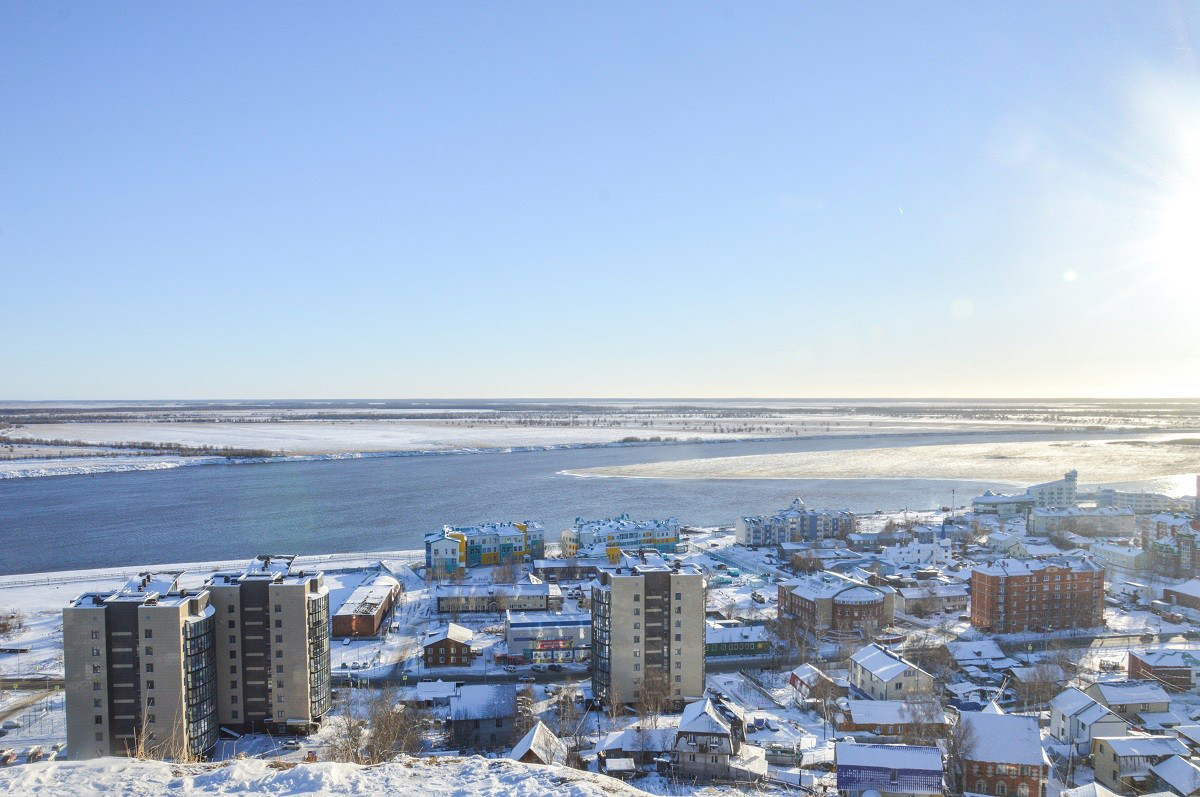 A little later, on the banks of the Irtysh, the sun sets, putting an end to a great trip, of which I wasn’t expecting much, but ended up bringing me a lot of joy. This human-sized city covered in snow was nevertheless very welcoming, although it wasn’t too hard to win over my heart. I look forward to coming back, as I promised to my friends. 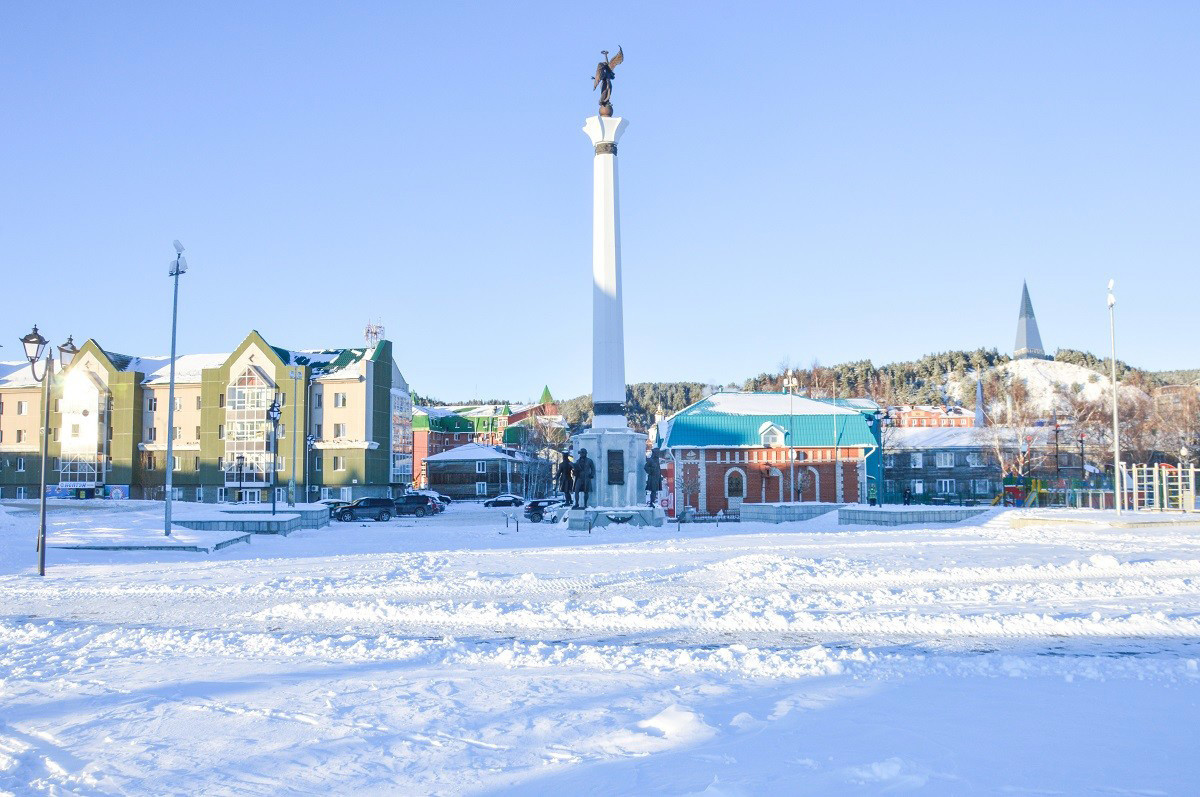 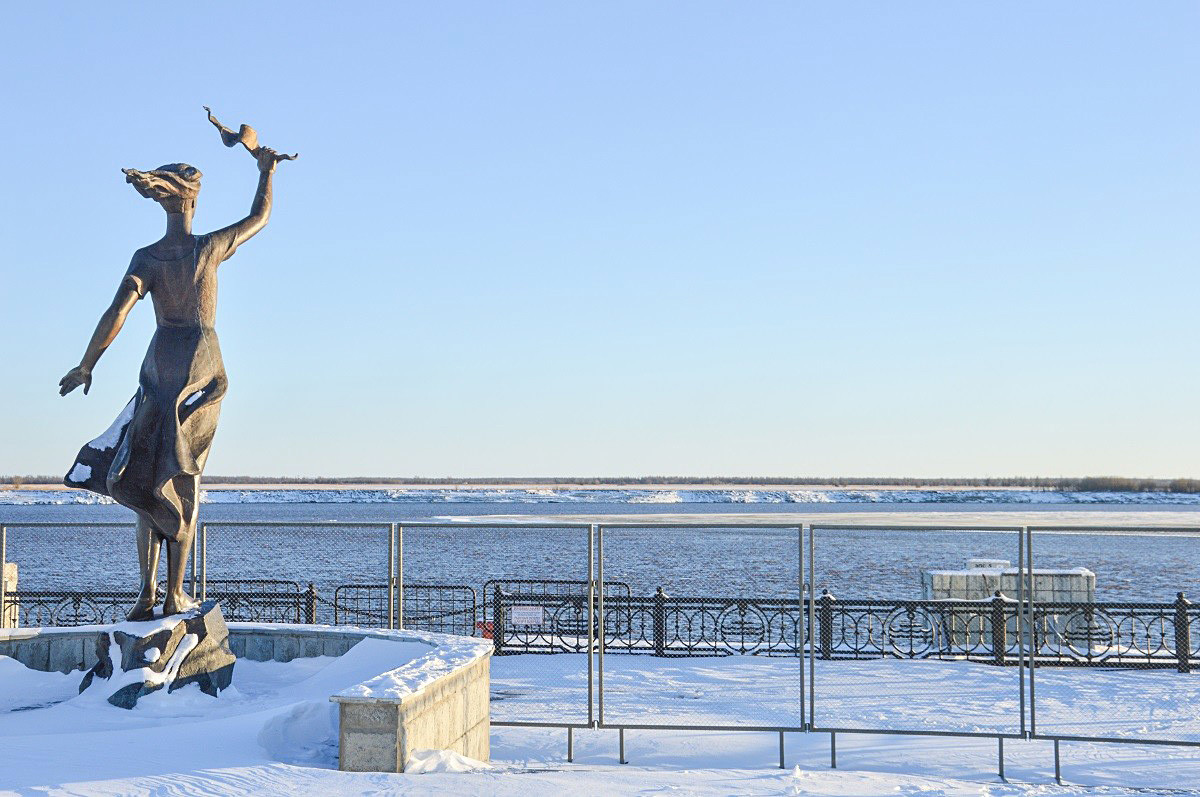 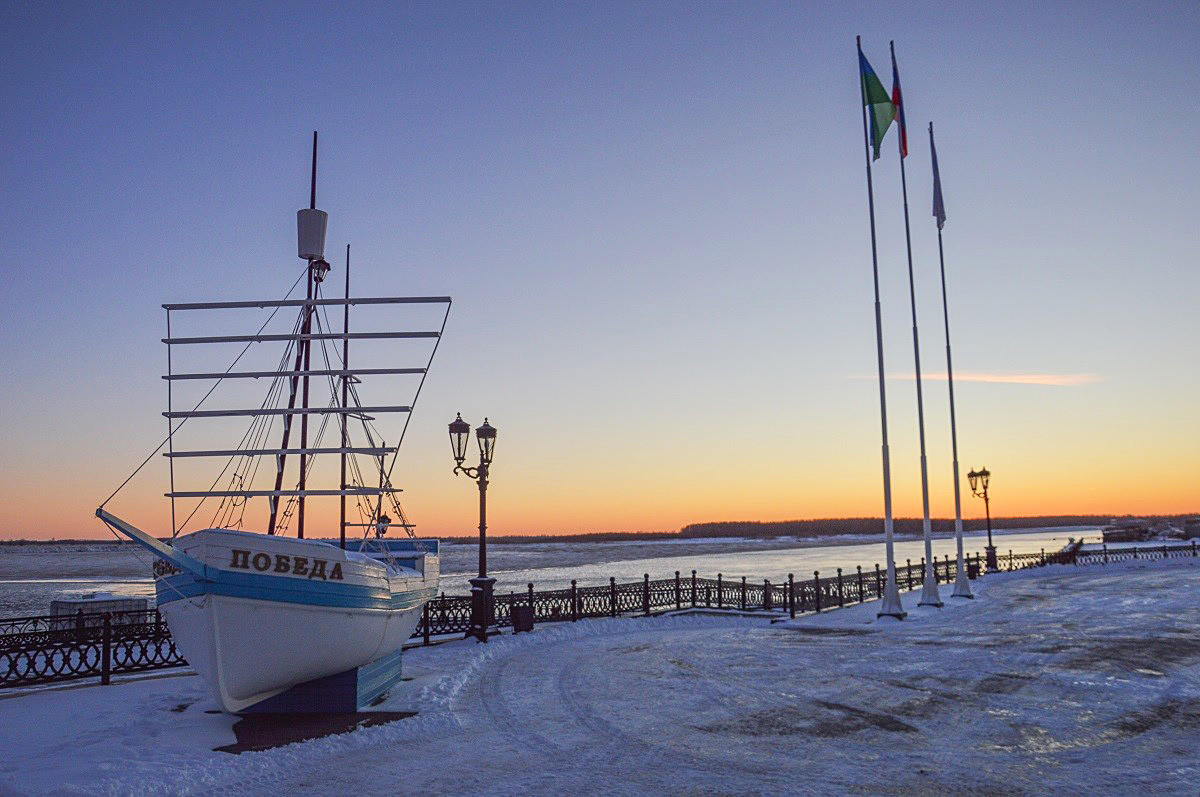 Just like Russian explorers of the past, Khanty-Mansiysk was the scenery of my first trip beyond the Urals, and I hope it will only be the start of many more Siberian adventures!