How Russians built an Orthodox church in the Antarctic (PHOTOS) 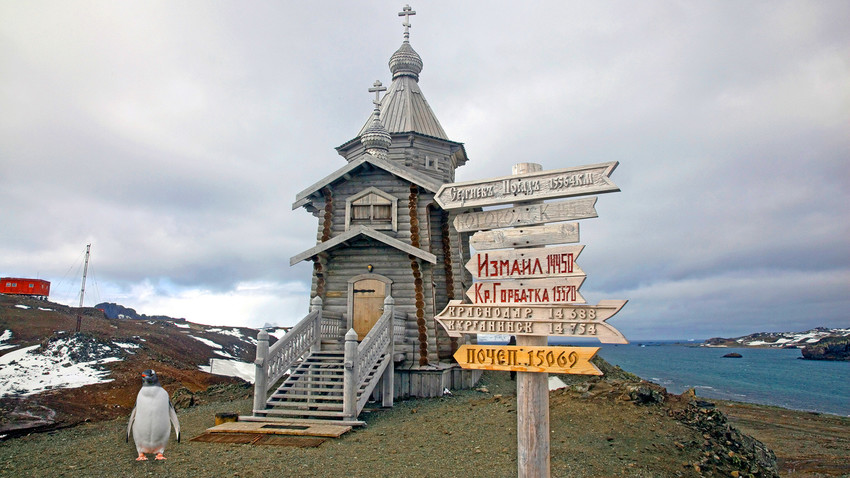 Legion Media, AP
On the edge of the Earth, you are ready to expect anything… but even this church, surrounded by penguins, looks a bit surprising!

The Trinity Church, built in 2004, is the southernmost Russian Orthodox church in the world. It’s located on Antarctica’s island of Waterloo, on the territory of the Russian polar station Bellingshausen (named after the discoverer of the continent), and is surrounded by lazy seals and curious penguins.

The church was built in Altai 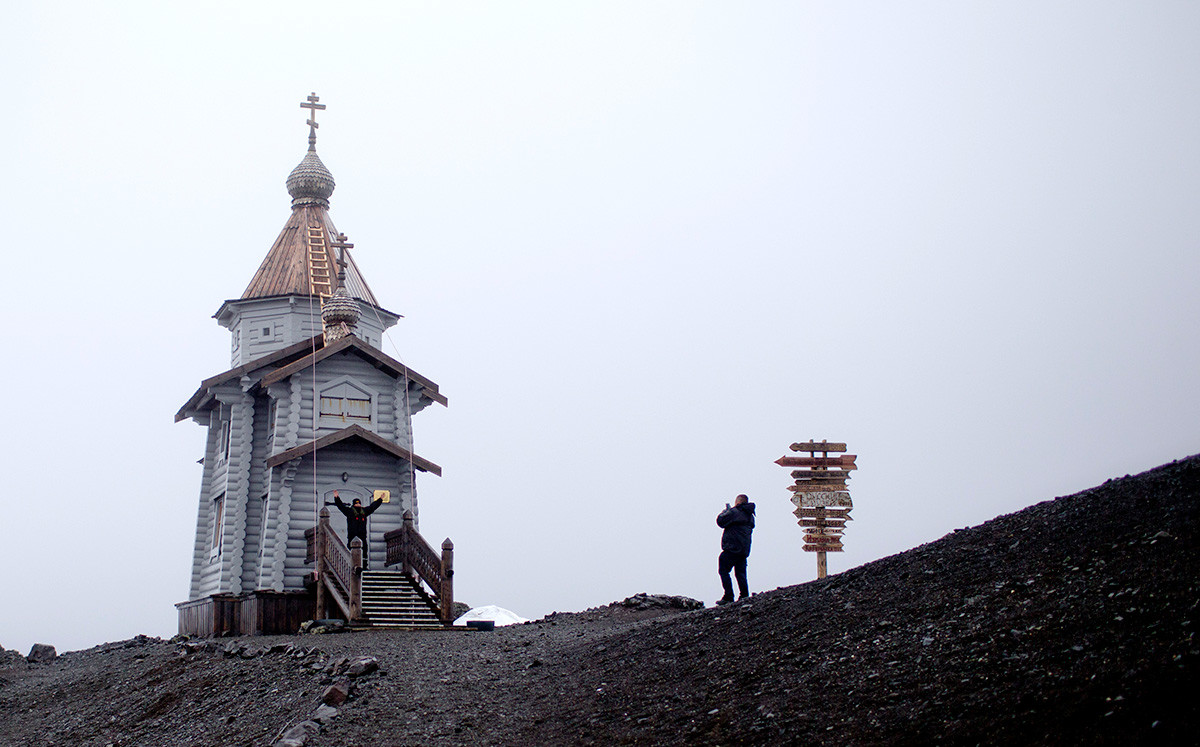 The Russian polar station appeared there in 1968, but the church was only proposed in the 1990s. The physical place for the church was chosen in 2002, but it took another two years to erect it here.

The building is made of cedar, larch and pine. Suitable wood was found near the city of Gorno-Altaisk in Siberia and the church was built by local carpenters. It measures 15 meters in height and can accommodate about 30 worshippers.

The church spent a year in Altai, and then was deconstructed and transported on trucks, first to Kaliningrad (Russian port on the Baltic), and then to Antarctica. There, in harsh conditions, it took 50 days for a team of 8 to reconstruct it again. Moreover, it was necessary to protect the walls from the local, almost horizontal rains, and also to stretch metal chains inside to secure it from severe winds. 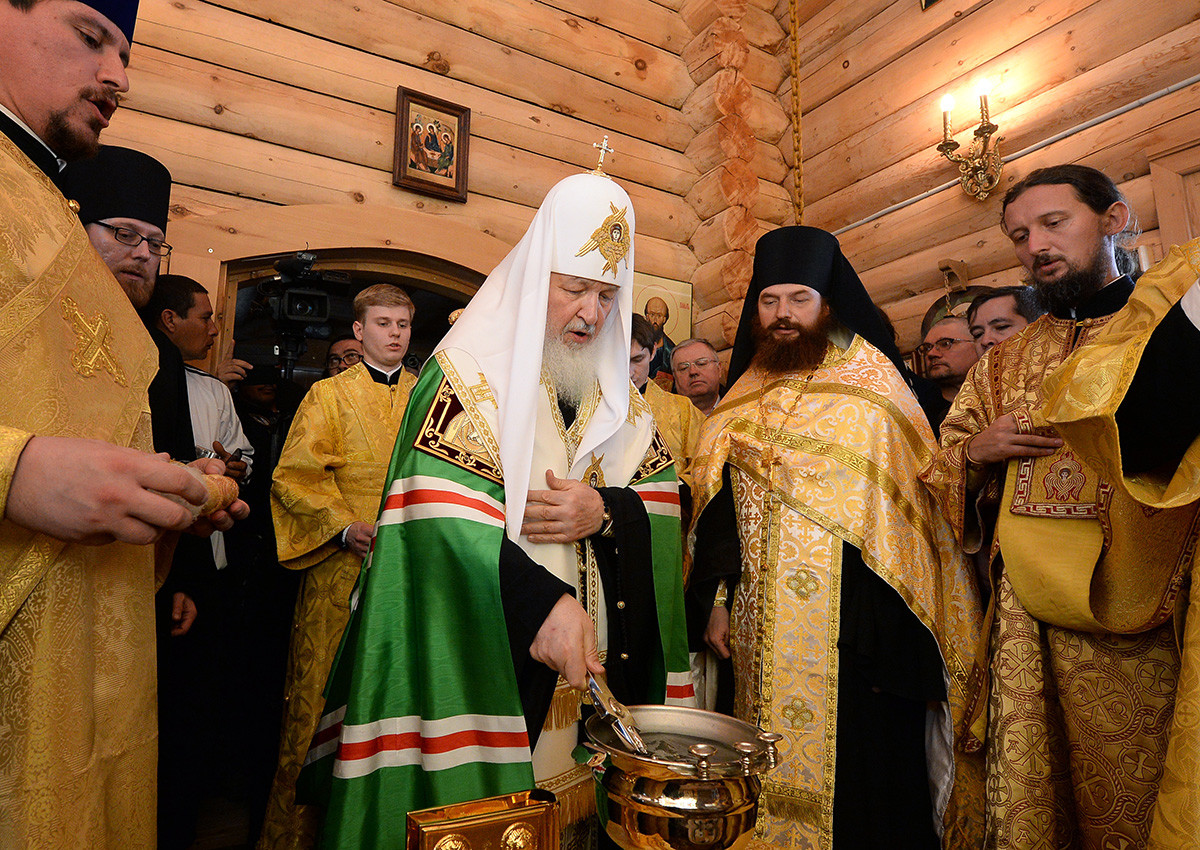 Patriarch Kirill (C) of Moscow and All Russia conducts a service at the Holy Trinity Church at Russia's Bellingshausen research station on King George Island.

Inside, there’s a list of all those who died on the continent – about 100 Russian and Soviet polar explorers, for whom the priests now pray. 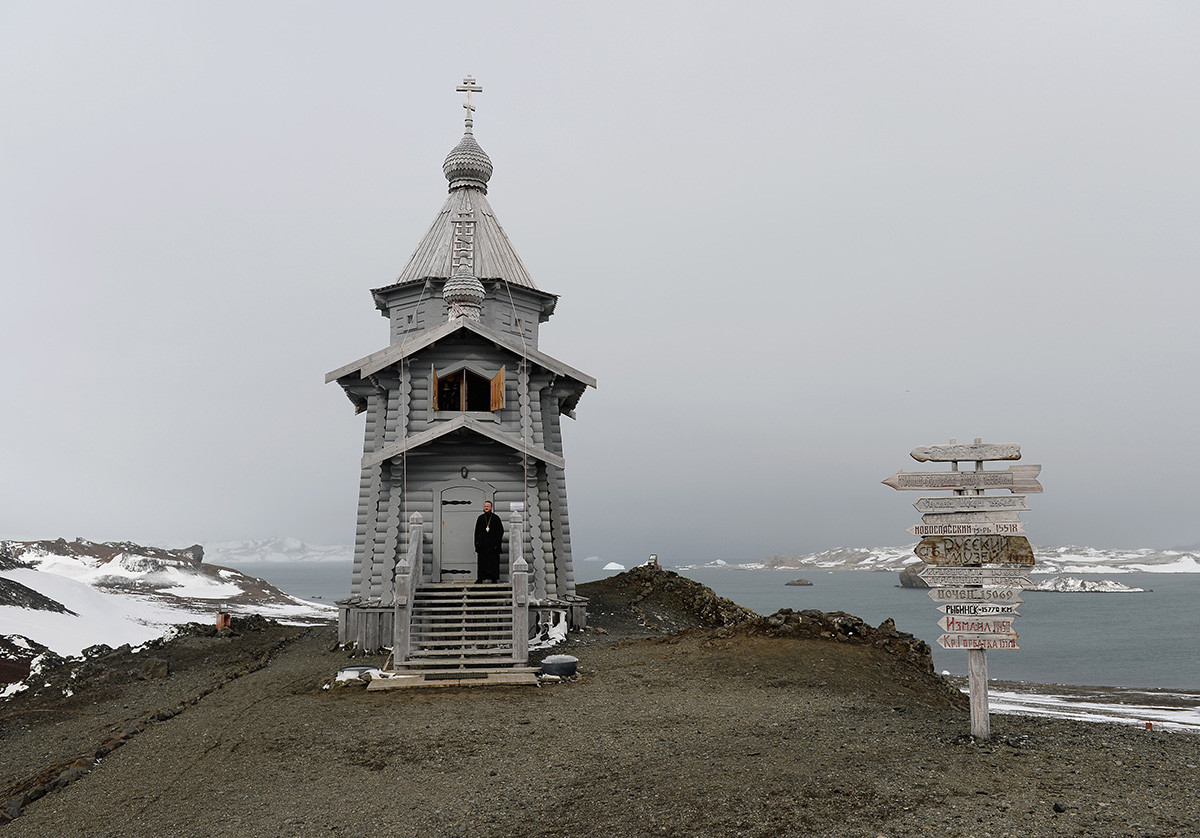 Priests are rotated every year, like other people at the station. In addition to the spiritual service, they do the same work as other polar explorers: clear snow, work with tools, such as saws and axes – in Antarctica, there is always something to do.

“There’s no holidays in Antarctica,” says deacon Maxim Gerb, “If there’s some urgent work, the entire station should gather, no matter the day. Sometimes, a service has to be moved, for example, to the early morning, to accommodate the whole team before the beginning of the working day. Prayer services are always served before work, instead of breakfast.” 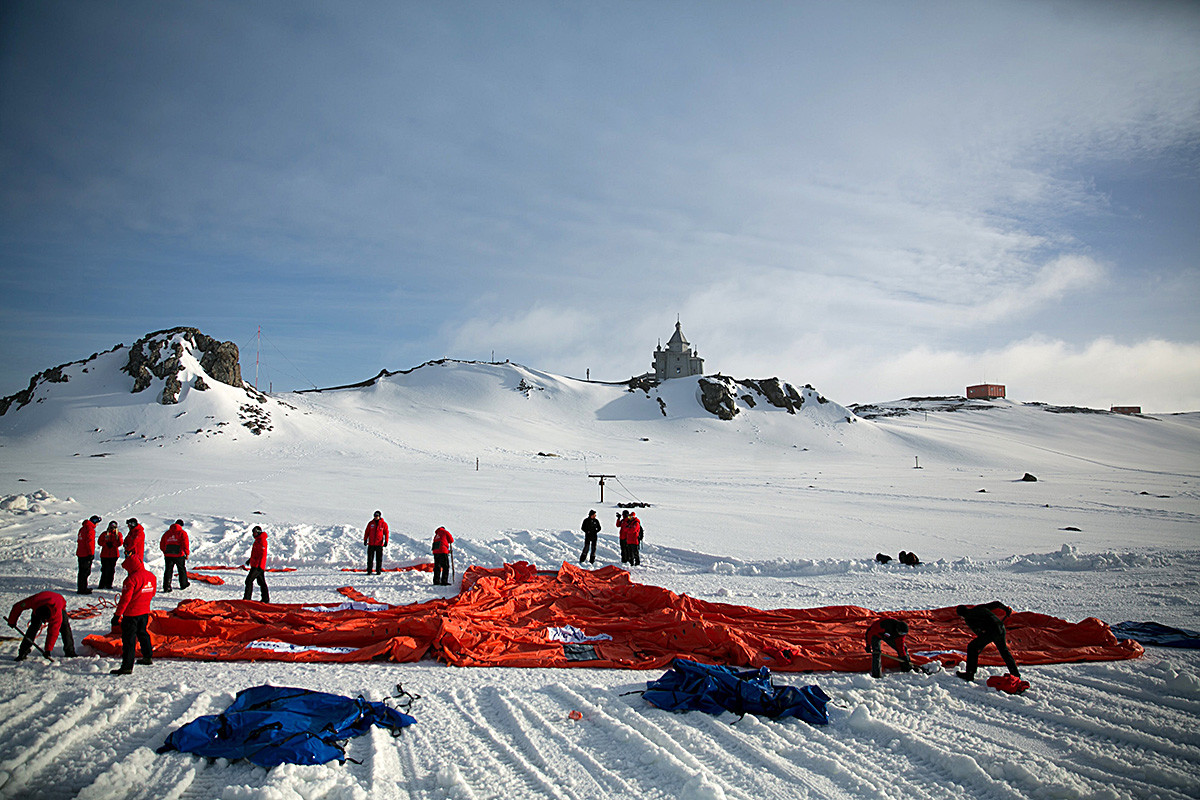 For sure, the Trinity Church is not the only one located in Antarctica – besides it, there are 7 more churches of different faiths. However, this is the only church that operates all year round.  Services are held every Saturday and Sunday.

Moreover, the services are held in both Russian and… Spanish!

“There are not many parishioners; only 16 people spend the winter [on the station], but for Sunday liturgy, 5-6 people or so gather, and even Chileans come. They have their own small church, but there are no priests, so some of them come to us. That's why we always read the gospel in two languages,” says the deacon. 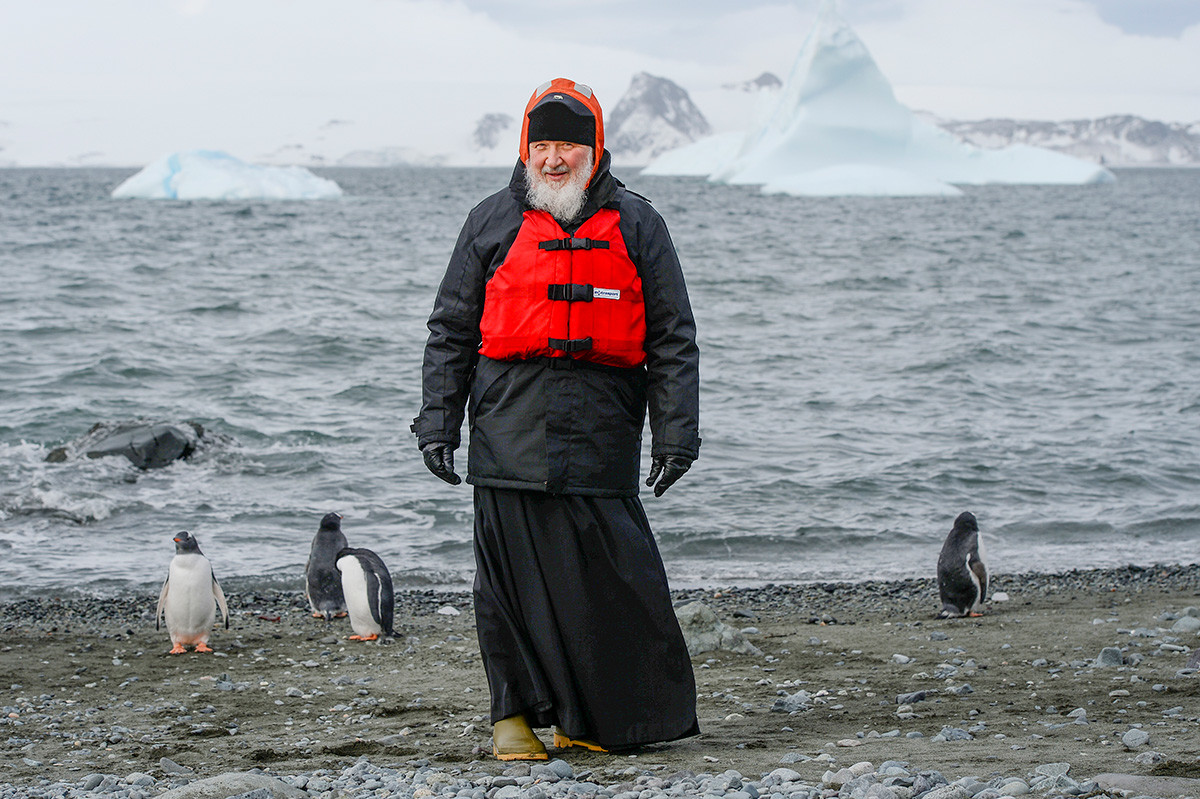 In January 2007, the first wedding between a Russian lady named Angelina and a Chilean man named Eduardo. He worked at the station with her father, and then came to visit him in St. Petersburg, where he met his future wife. He accepted Orthodoxy, and she went to him in Antarctica.

There’s a copy of the Antarctica’s church in Russia 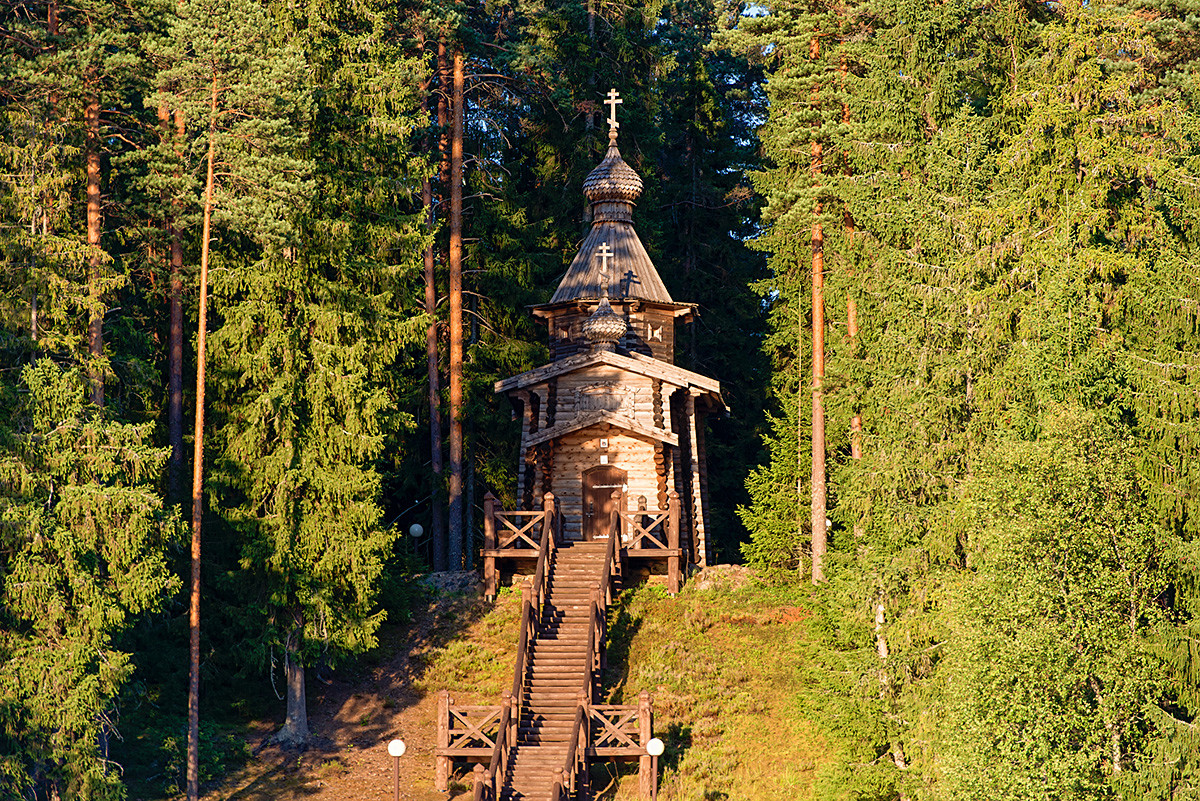 The wooden Church of St. Sergius of Radonezh, Valday district, the village of Shuya, lake Uzhin.

You’ve probably heard about the city of Valdai in the Novgorod Region? This is an old Russian place, popular among tourists for its beautiful nature and ancient architecture. Here, in 2007, the Church of St. Sergius of Radonezh was built, an exact copy of the Trinity Church in Antarctica. A former paratrooper and director of a local recreation center came up with the idea. Services are held on Saturdays.