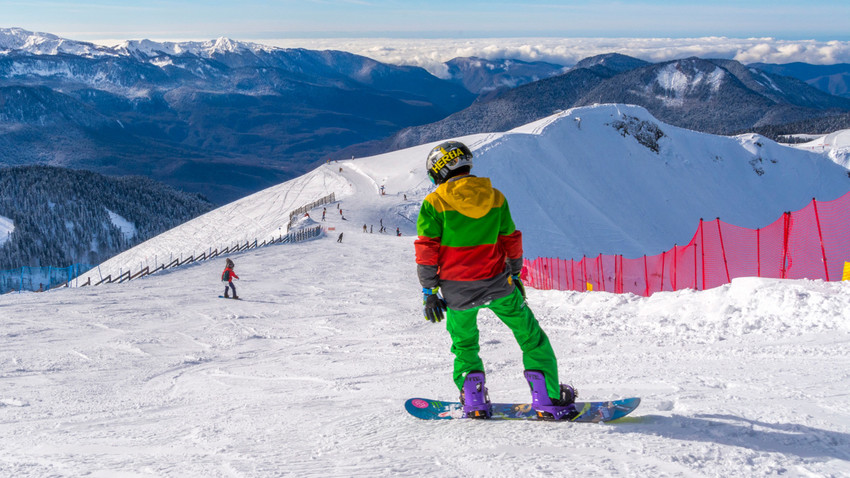 Legion Media
Here’s everything you need to know about one of the best ski resorts in Sochi.

Who is the resort for?

Rosa Khutor is a winter resort ideal for riders of any skill level.

The variety of pistes is the main attraction of the resort. “There are pistes for children and beginners and there are places for more advanced riders. Other resorts offer less choices,” says Alexei, 41, who came to Rosa Khutor with his son.. 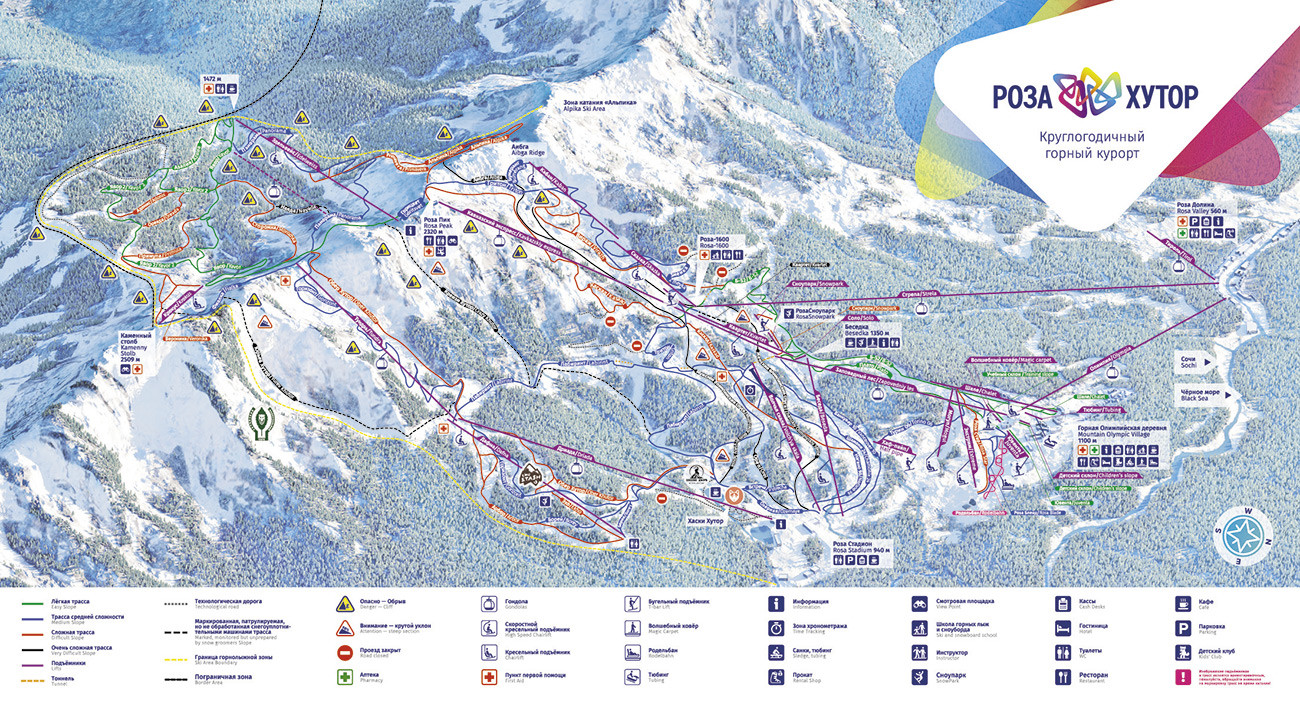 Yet not every spot at Rosa Khutor is suitable for children or beginners. “Sometimes, easy pistes (marked green) transfer into the more difficult ones (marked blue and red). As a result, these green pistes work more like a warm-up for advanced riders rather than pure training for beginners,” says Viktoria, 26, a beginner rider.

Although beginners may prefer the Gazprom Laura resort to Rosa Khutor, nobody disputes Rosa’s superiority when it comes to the variety of slopes. 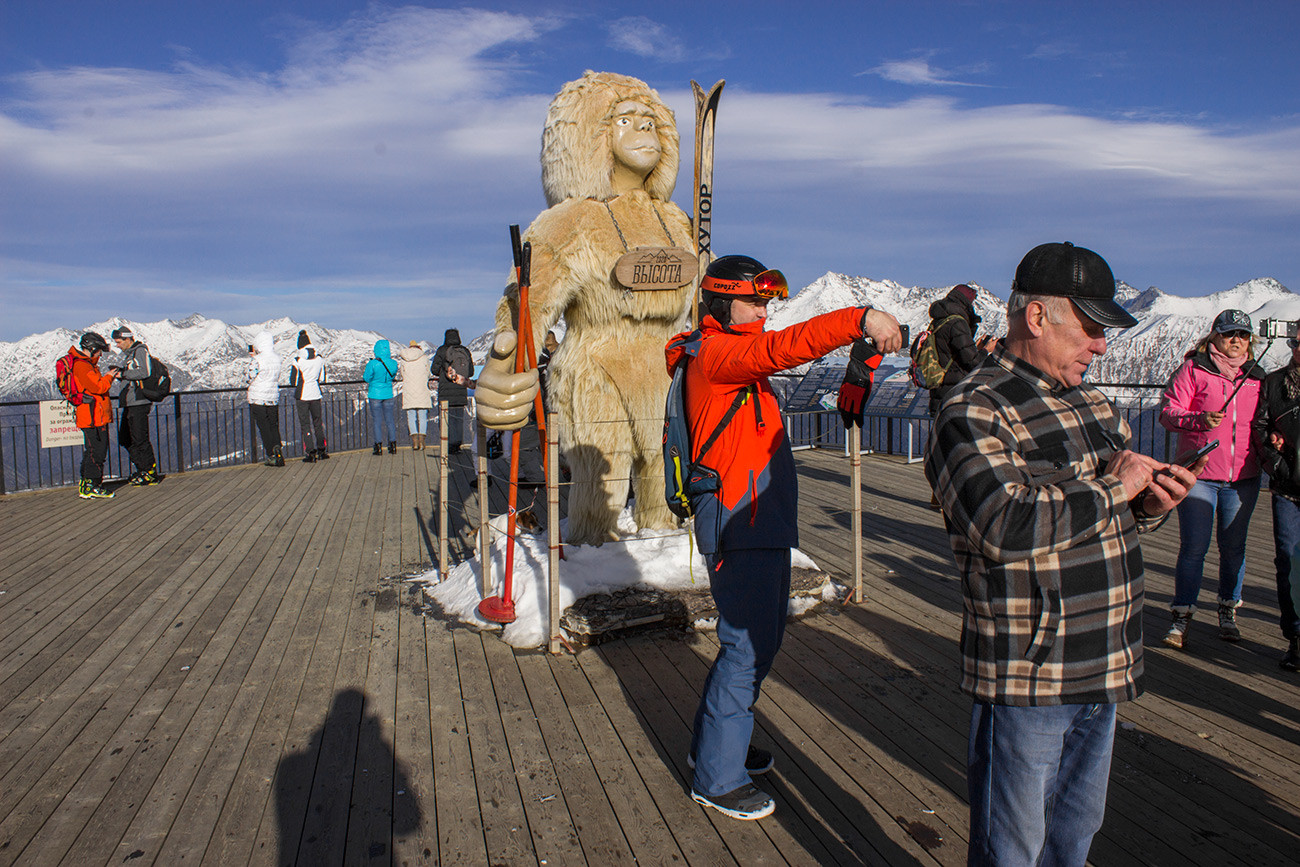 Guests at the Rosa Peak, the highest point of the Rosa Khutor resort.

“We’ve been snowboarding at Rosa Khutor every year for the last five years. The resort does everything that can humanly be done: they’ve improved service and the pistes are in great condition. The only thing they cannot influence is the weather, but that’s impossible. This is why we always fly in on short notice. If the weather is too warm, we skip it,” says Dmitri, 30, a frequent guest at Rosa Khutor.

Is it suitable for advanced riders?

There are plenty of blue, red, and black pistes at the resort for advanced riders. It is also one of the best resorts in Sochi for freeriding.

“In Sochi, you basically have two options for freeriding, Rosa Khutor and Krasnaya Polyana,” says Denis, 29, a ski instructor.

“These two resorts are at the highest altitude, and they both have forest zones and a lot of steep descents,” he says. 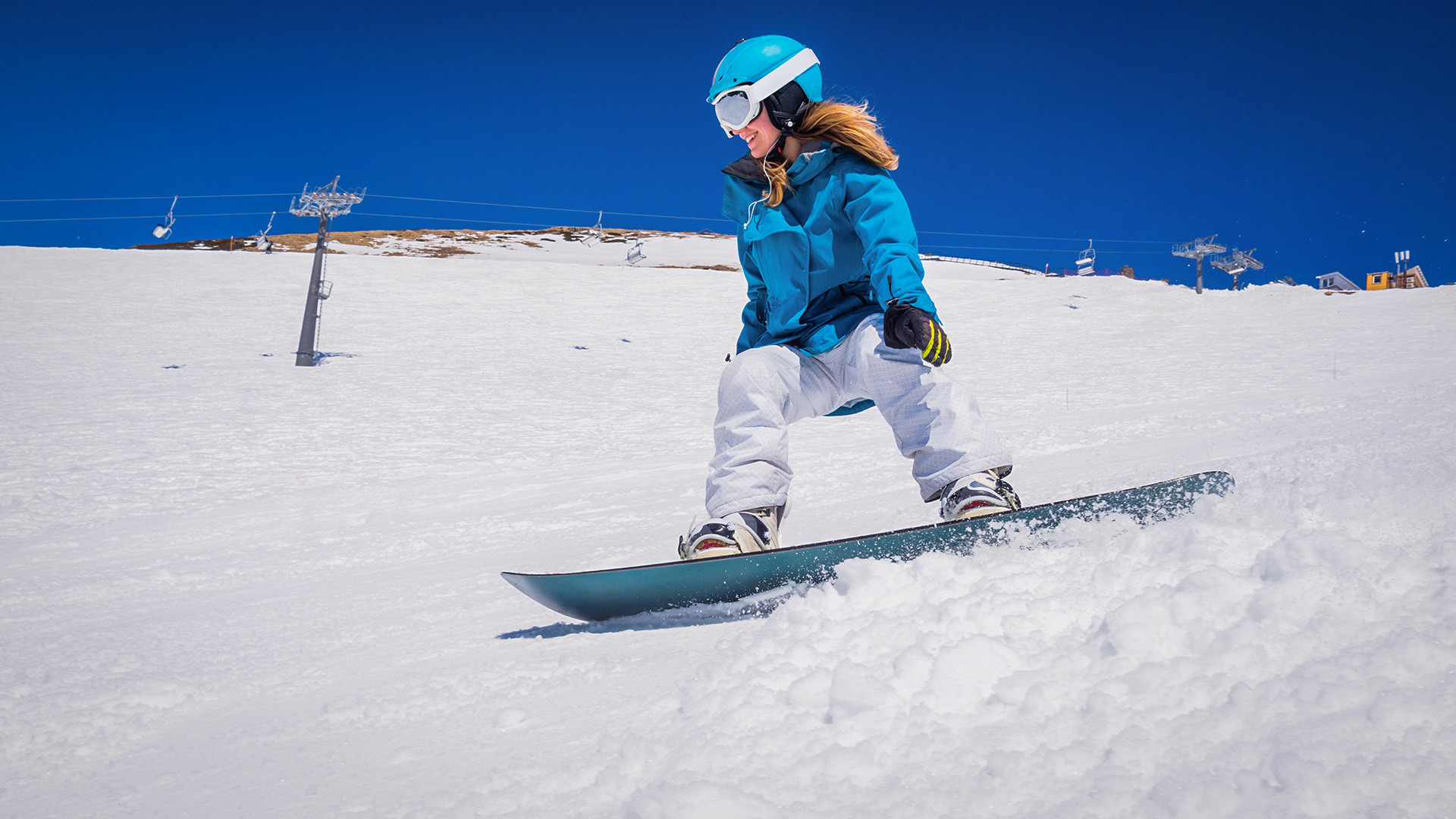 In a nutshell, after the 2014 Winter Olympics, this Sochi resort inherited some 100 km of quality slopes, which makes it the most diverse resort among the four available in the city and in the whole of Russia.

What’s the difference between the Southern and Northern sides?

When you climb the ridge to Rosa Peak in a cable car you only see the Northern side of the mountain. This is where the majority of pistes are located. However, you may also ride up the southern side. It is dominated by green slopes that are relatively easy to master with a few red pistes that occasionally intersect with the green ones.

How expensive is it?

Money-wise, Rosa Khutor is as affordable as any other ski resort in Sochi. A night in one of the higher-end hotels averages at $150 for two, with economy options for as little as $60.

An hour-long taxi ride from or to the airport costs some $30. Two-day ski passes at the resort sell for $103 apiece during the peak season, which is from late December to early January, and for $52 starting from April, 5. Buying a ski pass for a longer period will save you some money, but the discount is not too impressive. Click here to calculate a ski pass price individually. 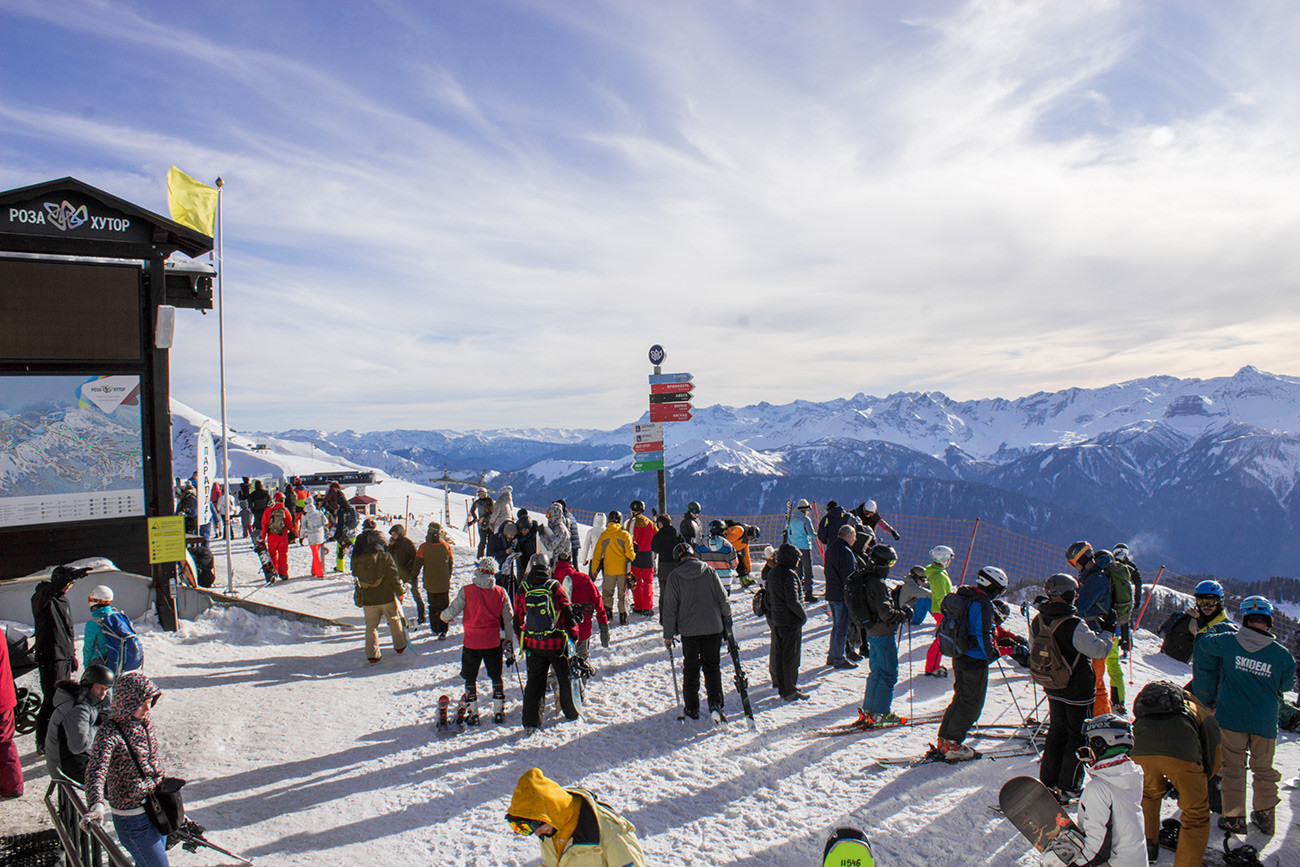 Riders at the Rosa Peak, the highest point of the Rosa Khutor resort.

Renting a full pack of gear, including skis, boots, ski suit, helmet and gloves will cost $54 per person per day at the basic rate. Advanced equipment can be rented at a higher rate. Click here to calculate the price individually.

An average bill for lunch or dinner at one of the local restaurants will set you back around $20 per person (alcohol not included).

Since the resort lies away from the main attractions of the Krasnaya Polyana area, there’s little temptation to spend extra money while at Rosa Khutor; the most extravagant and most expensive entertainment is paragliding from the top of the mountain – an adrenaline ride that costs roughly $106 per person. 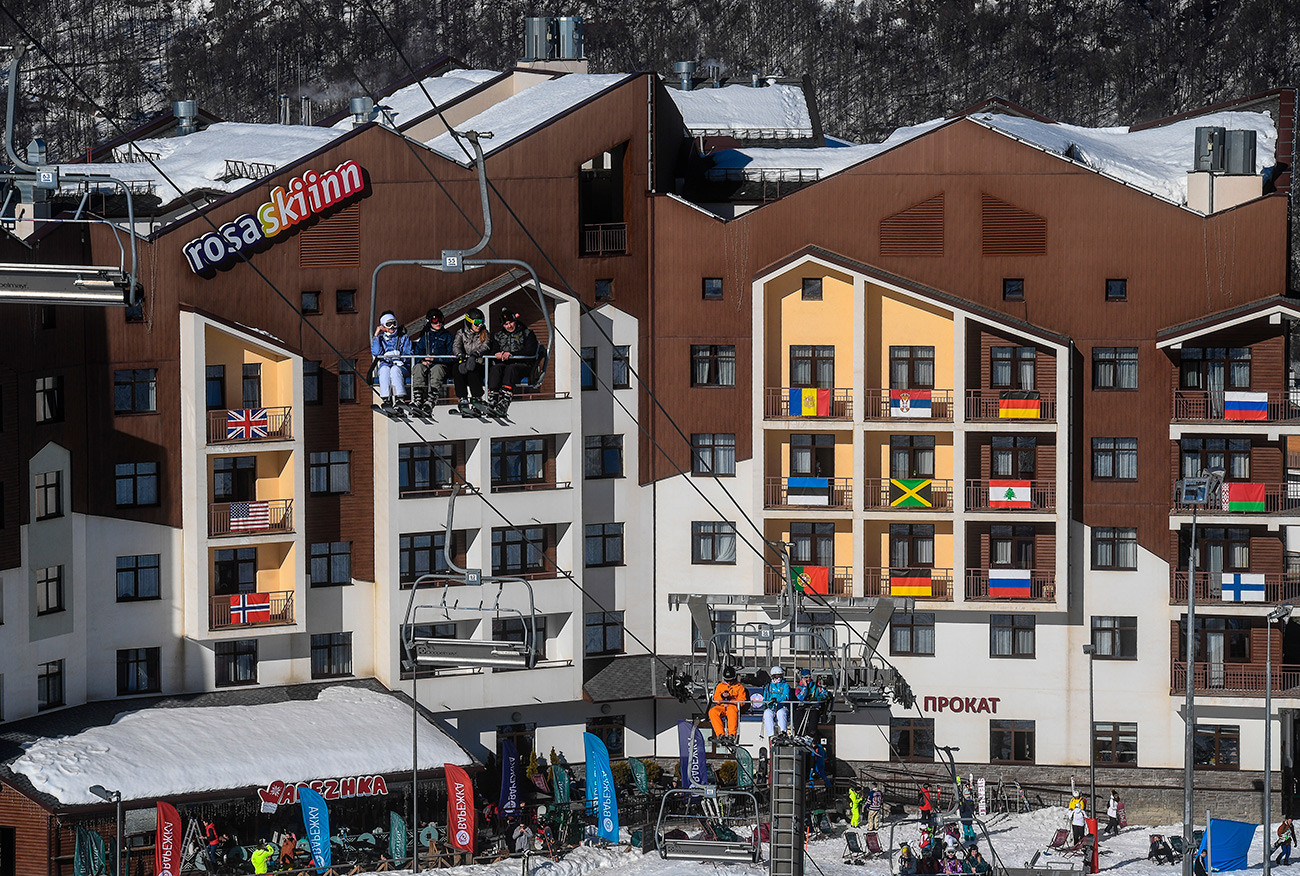 Those who prefer to have a calm and peaceful retreat instead should consider staying at Rosa Ski Inn, Rosa Chalet, Rosa Springs, and Rider’s Lodge, all located closer to the slopes. 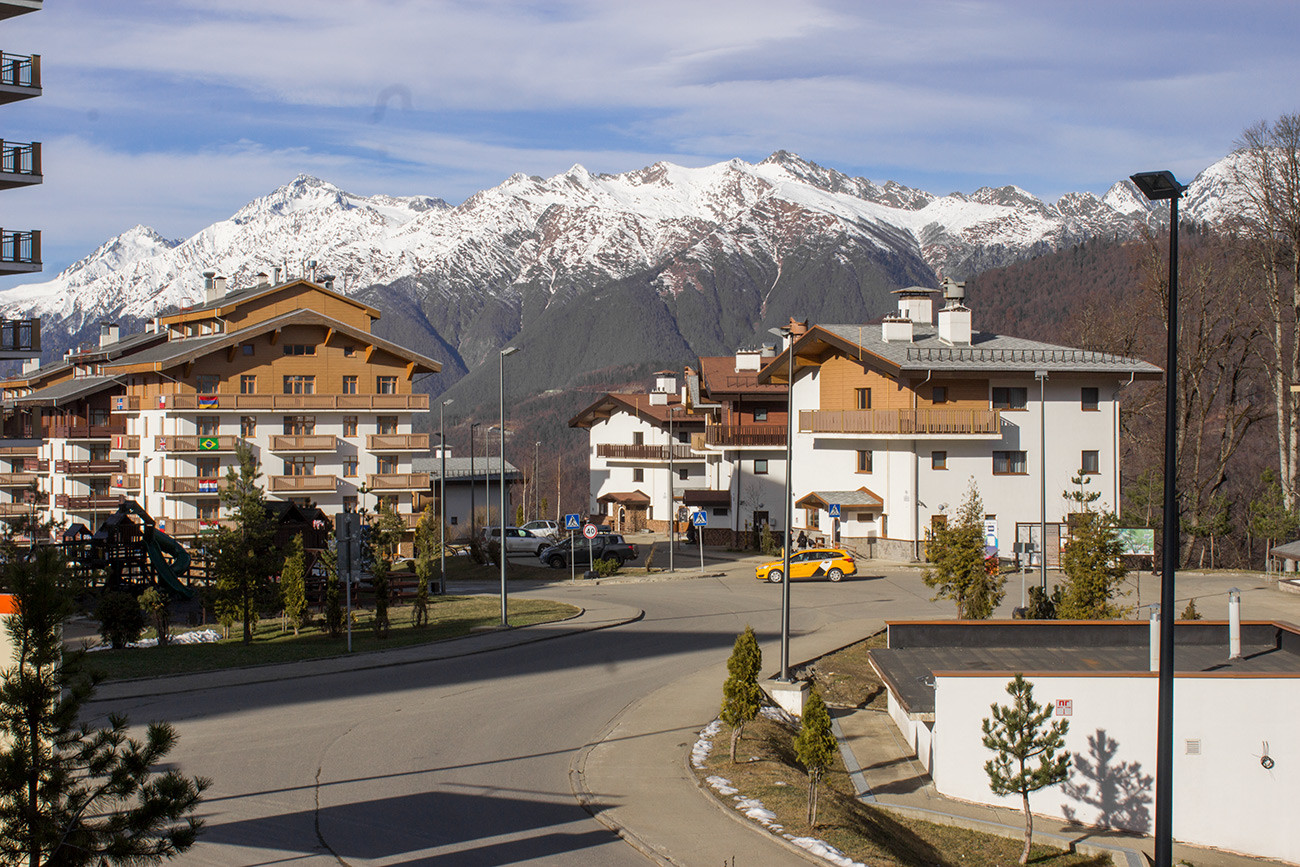 Those who prefer to have a calm and peaceful retreat instead should consider staying at hotels located closer to the slopes.

Both areas of Rosa Khutor offer different accommodation options averaging at $150 a night for two.

What are the apres-ski activities at the resort?

With minor exceptions, the resort hosts at least two social events every weekend. Live pop and rap performances, music festivals, stand-up shows, and sports competitions constitute the bulk of the apres-ski entertainment at the resort. 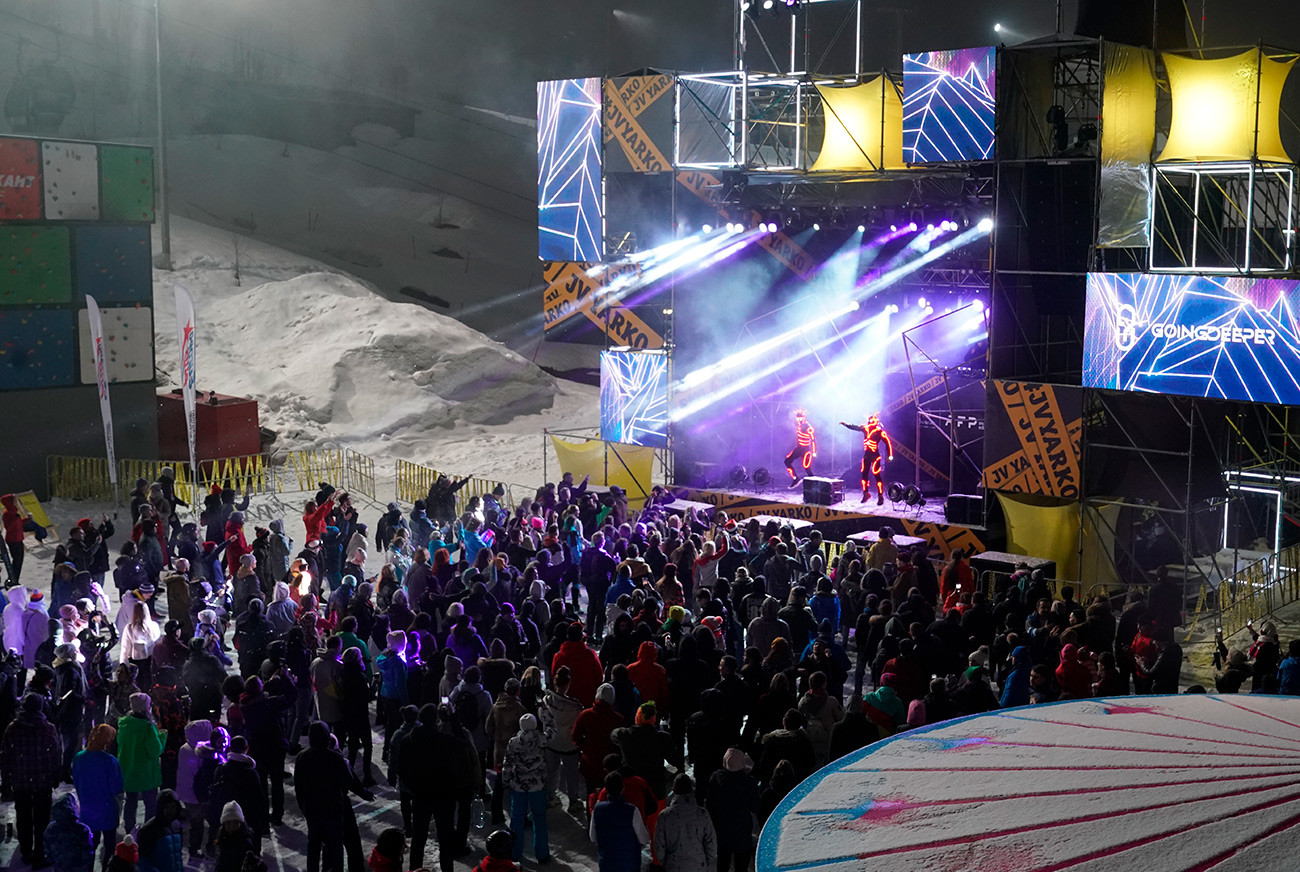 Alfa Future People Snow Edition festival at Rosa Khutor. Many of the social activities here are tailored for the Russian audience.

Unfortunately for foreign guests, however, most of the social activities are tailored for the Russian audience. Click here for a full schedule for the coming months.

What’s there beyond skiing?

The most notable non-skiing activities offered by the resort are paragliding, sledding, winter tubing, rodelbahn riding, go-karting and even crossbow-archery shooting. All activities are paid for separately. Click here for a full list of available activities and their schedules.

Some travelers come here for the view.

Is Rosa Khutor suitable for those traveling with kids?

It is. The resort runs ski lessons for kids in a specially allocated area that is comfortable and safe enough for kids to get to know the sport. Instructors are always present at the venue that is shared between various “kids clubs” operating at the resort.

Parents may choose to leave their children at one of the clubs for as little as an hour or as long as a full day. A mini zoo also operates at the resort ($5 per person), as well as a fitness center for children (starting from $8 per child).

Click here for your ULTIMATE guide to all of the ski resorts in Sochi.