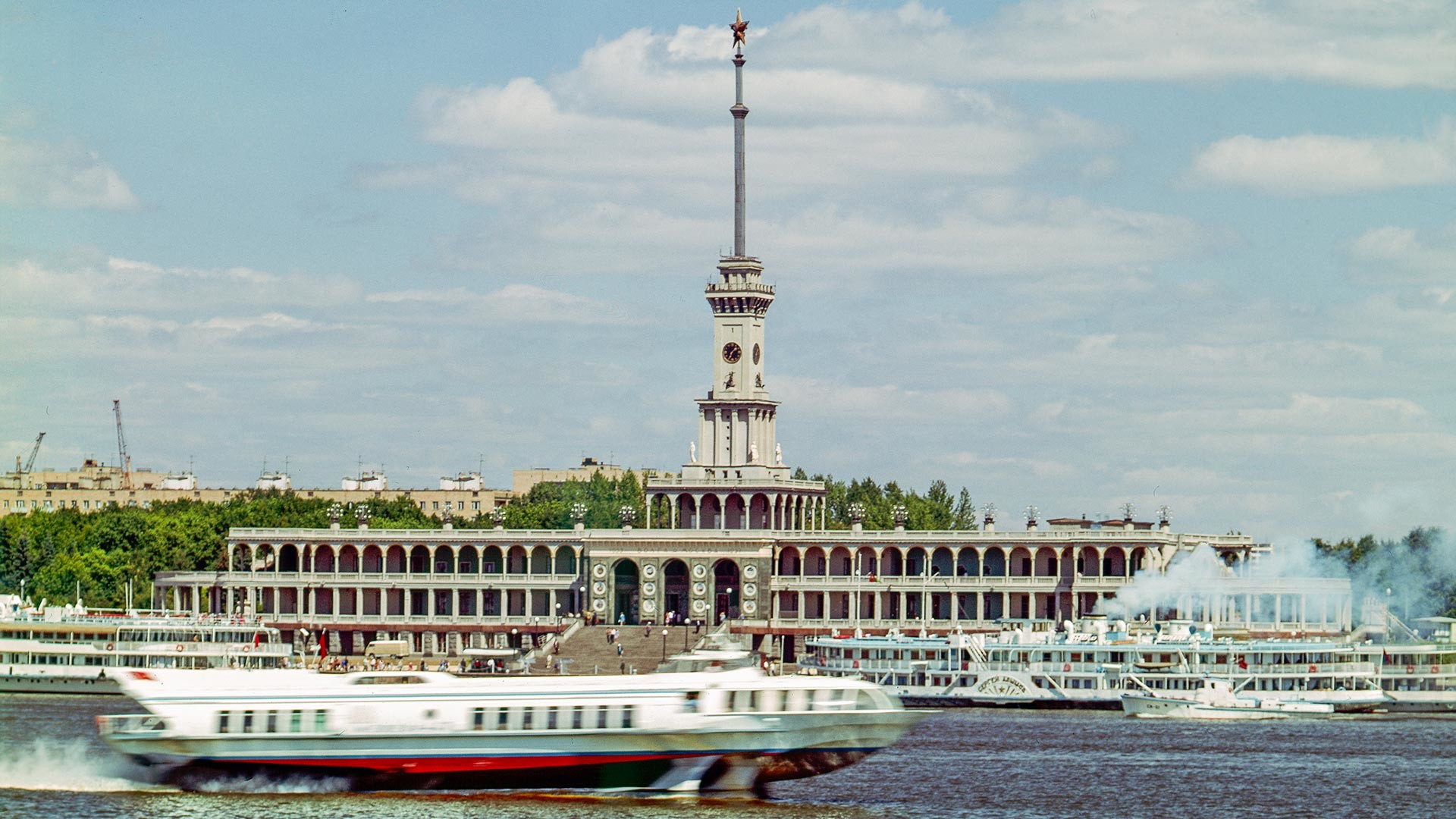 The North River Terminal in Moscow.

N.Loginov/Sputnik
River cruises were extremely popular in the Soviet Union! Giant boats, with restaurants and entertainment onboard, and guided tours in the cities - and everything at a reasonable price.

Various river and sea cruises were organized from the Soviet Arctic to the Black Sea, along the Urals and Siberian rivers, and in the Far East, which lasted from a couple of days to several weeks. For this purpose, all over the country, beautiful and modern river and sea terminals were built, which themselves became additional attractions of their respective cities!

1. The North River Terminal in Moscow 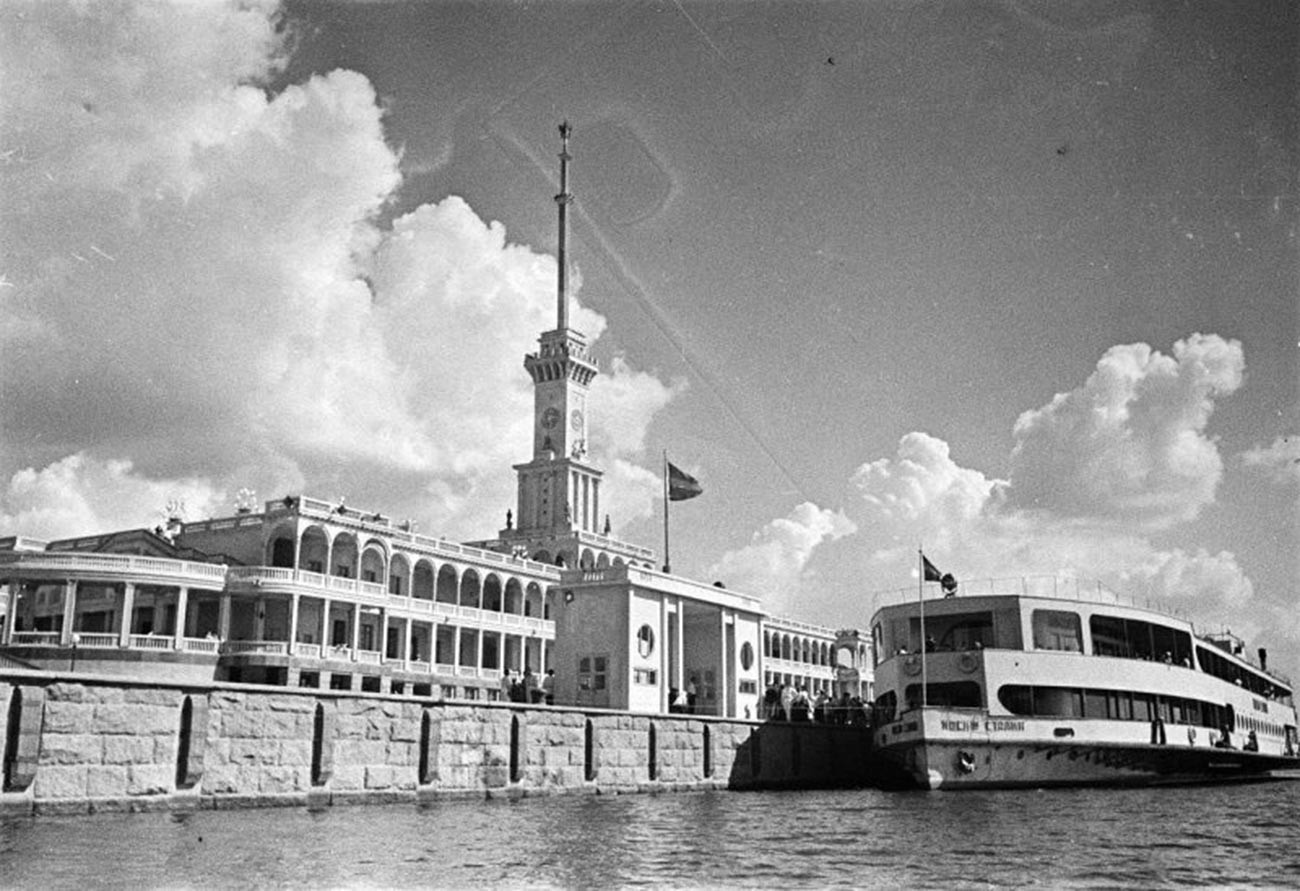 One of the first buildings constructed in the Stalinist Empire style, the North River Terminal was the main gateway for travellers to Volga and Don Rivers and to the Black and Caspian seas. From a distance, it looks like a huge ship, crowned with a 27-meter spire. The terminal was surrounded by a beautiful park with navy-style monuments and cafes. And it still operates!

2. The river port in Volgograd 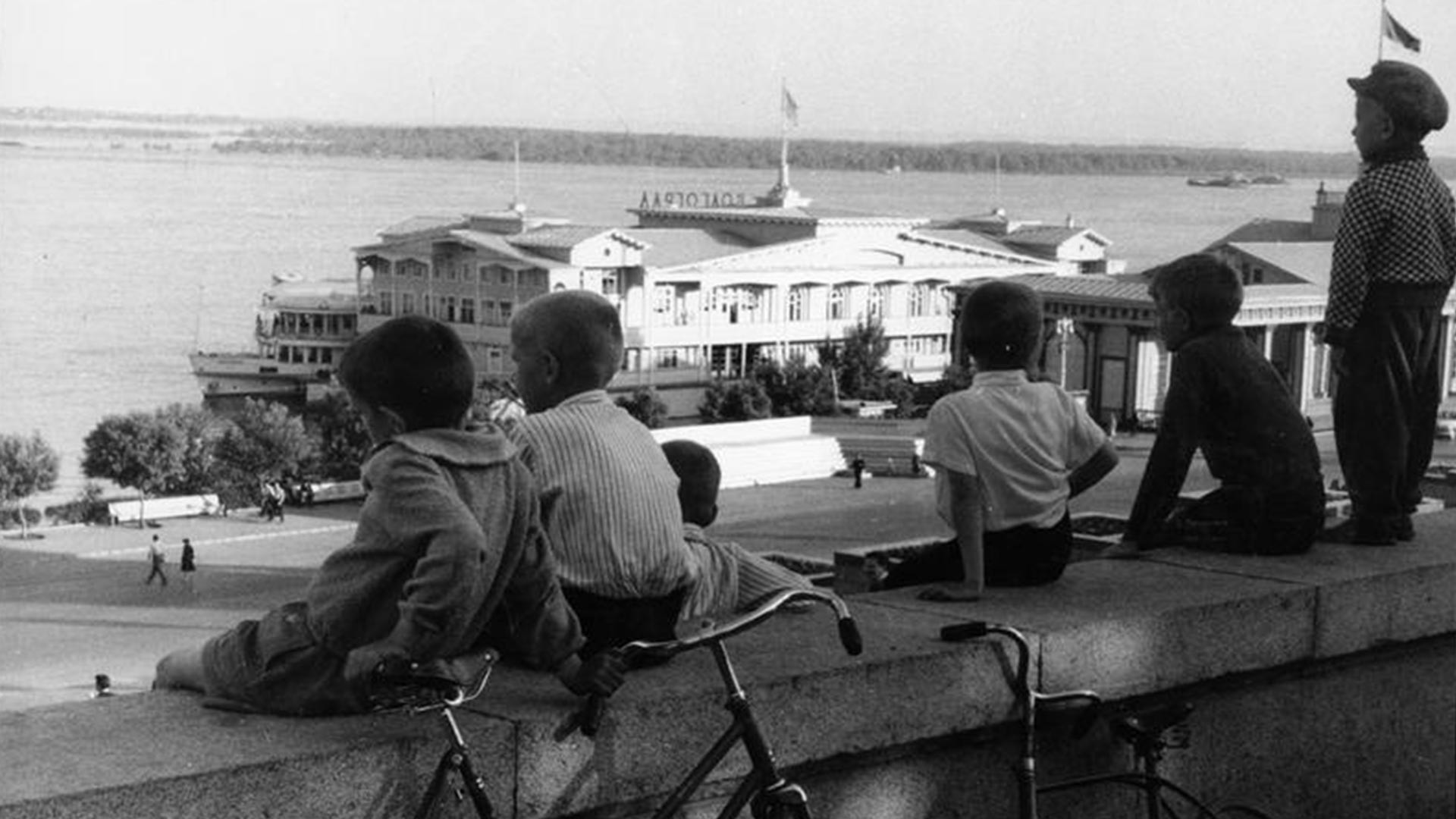 Cruises down the Volga River included several ancient cities like Yaroslavl, Kostroma, Nizhny Novgorod, Kazan, Samara - until Volgograd or Astrakhan in the south of the country. A trip from Moscow to Volgograd took more than one week, but you’ll never get bored of the scenic river and passing by new cities.

3. The river terminal in Nizhny Novgorod 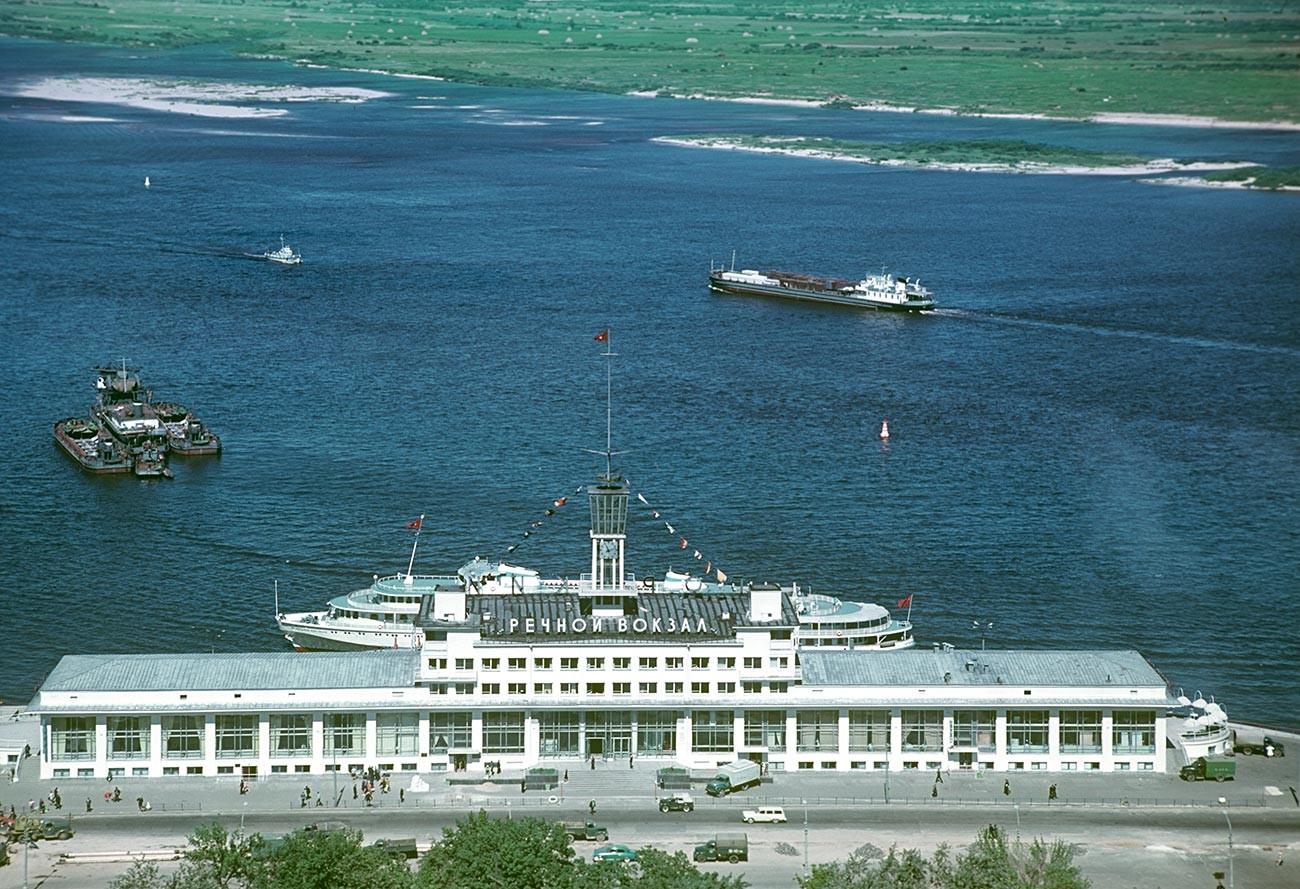 If you look from above at the terminal in Nizhny Novgorod, you’ll notice that it resembles a ship. Built in 1964 on the confluence of the Oka and Volga rivers, during Soviet times, it was one of the most crowded river terminals on the route, hosting hundreds of tourists every day. Besides cruises, you could take short boat trips to the neighboring districts down the river. 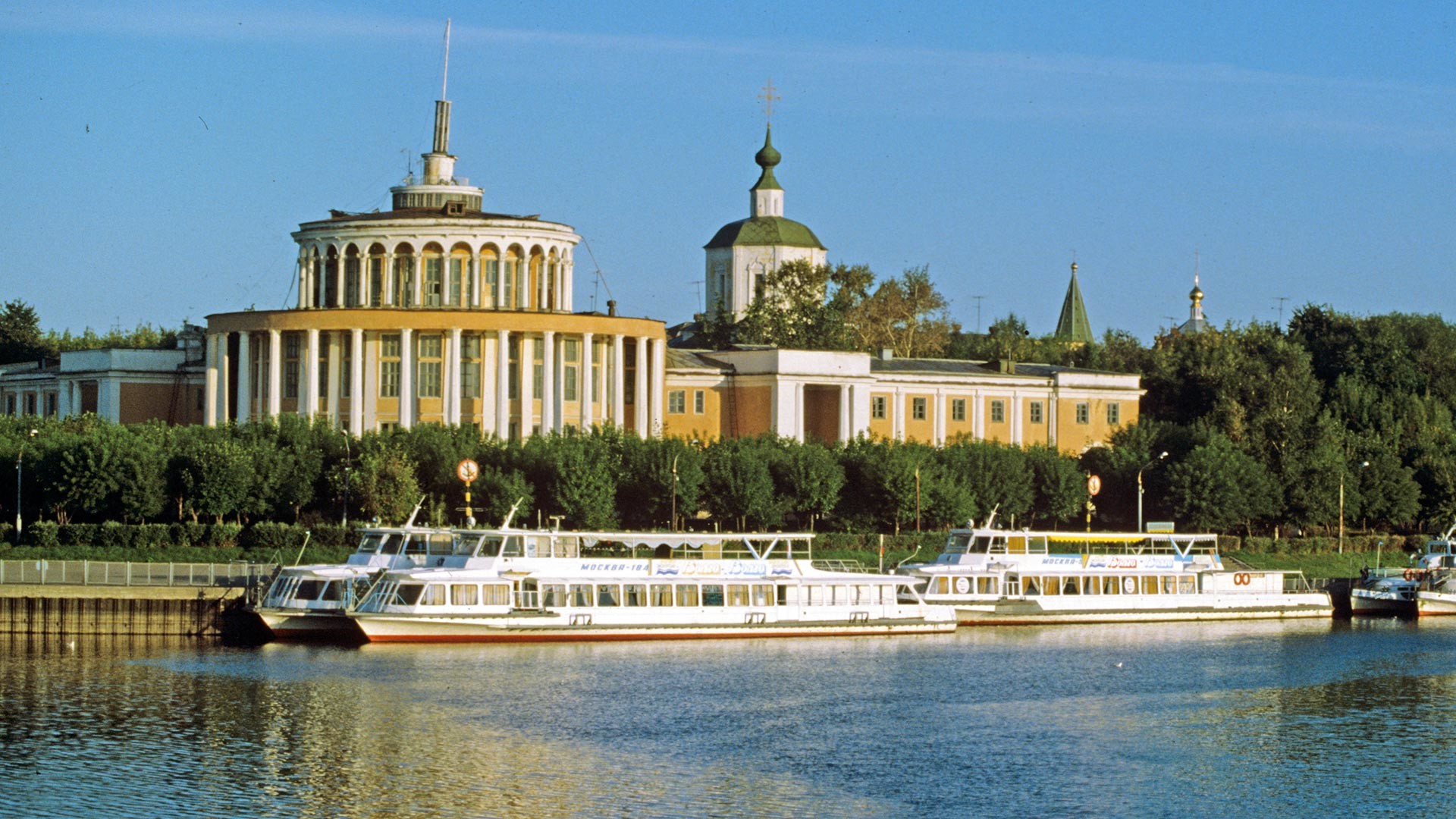 Like in Moscow, the river terminal in Tver was built in the Stalinist Empire style. Soviet architects designed the terminal in 1938 and placed it among the 19th century buildings. Located near the city center, it was not only a big hub (it can accept up to 500 passengers at one time), but also a popular city attraction. 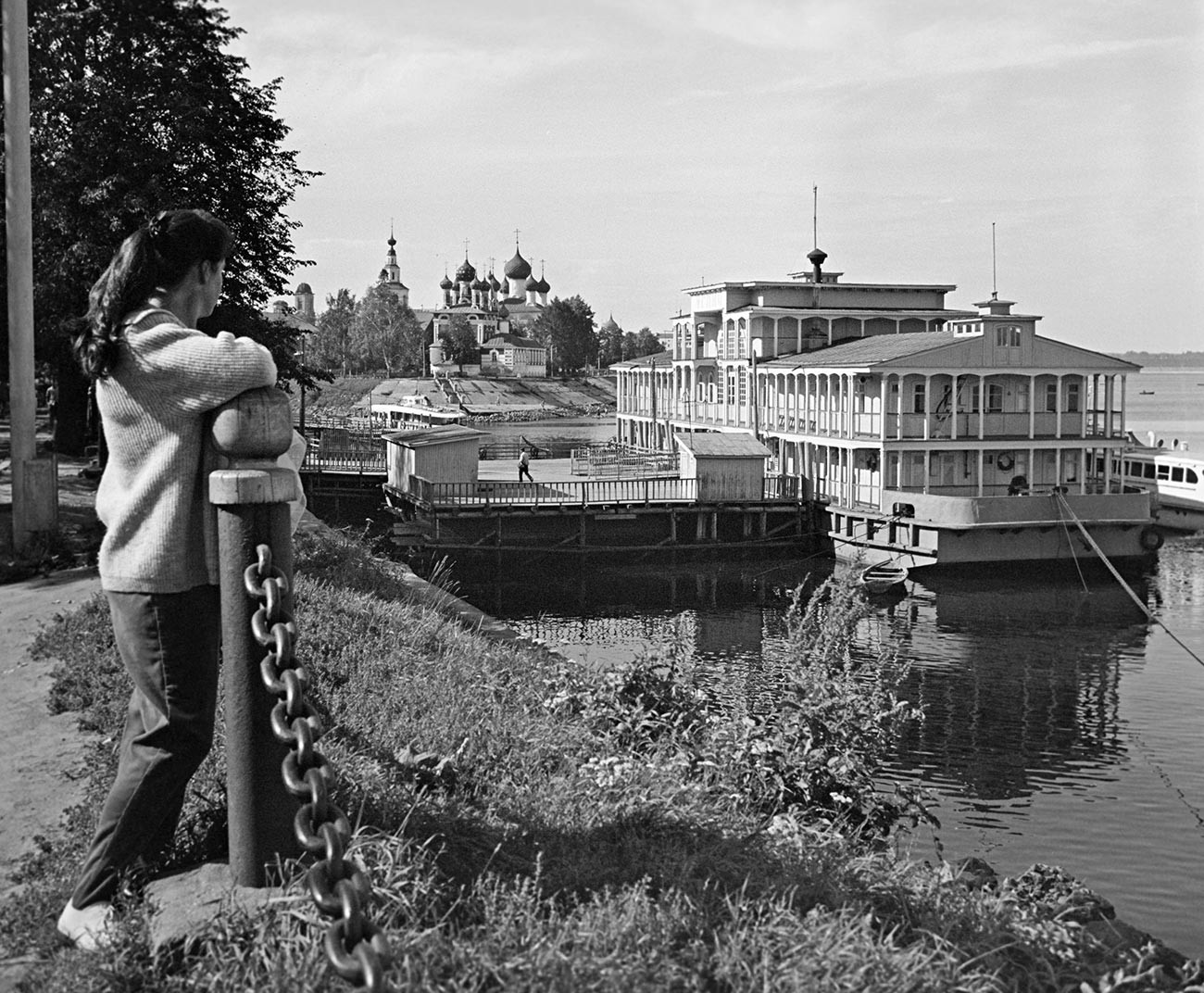 River terminal and church in Uglich, 1965.

Uglish is the closest port to Moscow (just 160 miles between the cities) and the most visited city of the famous Golden Ring tourist route. Almost all the ships that follow from Moscow down the Volga River make stops here. This ancient town and the center of the traditional Russian architecture hosts more than 1,000 river boats every year! 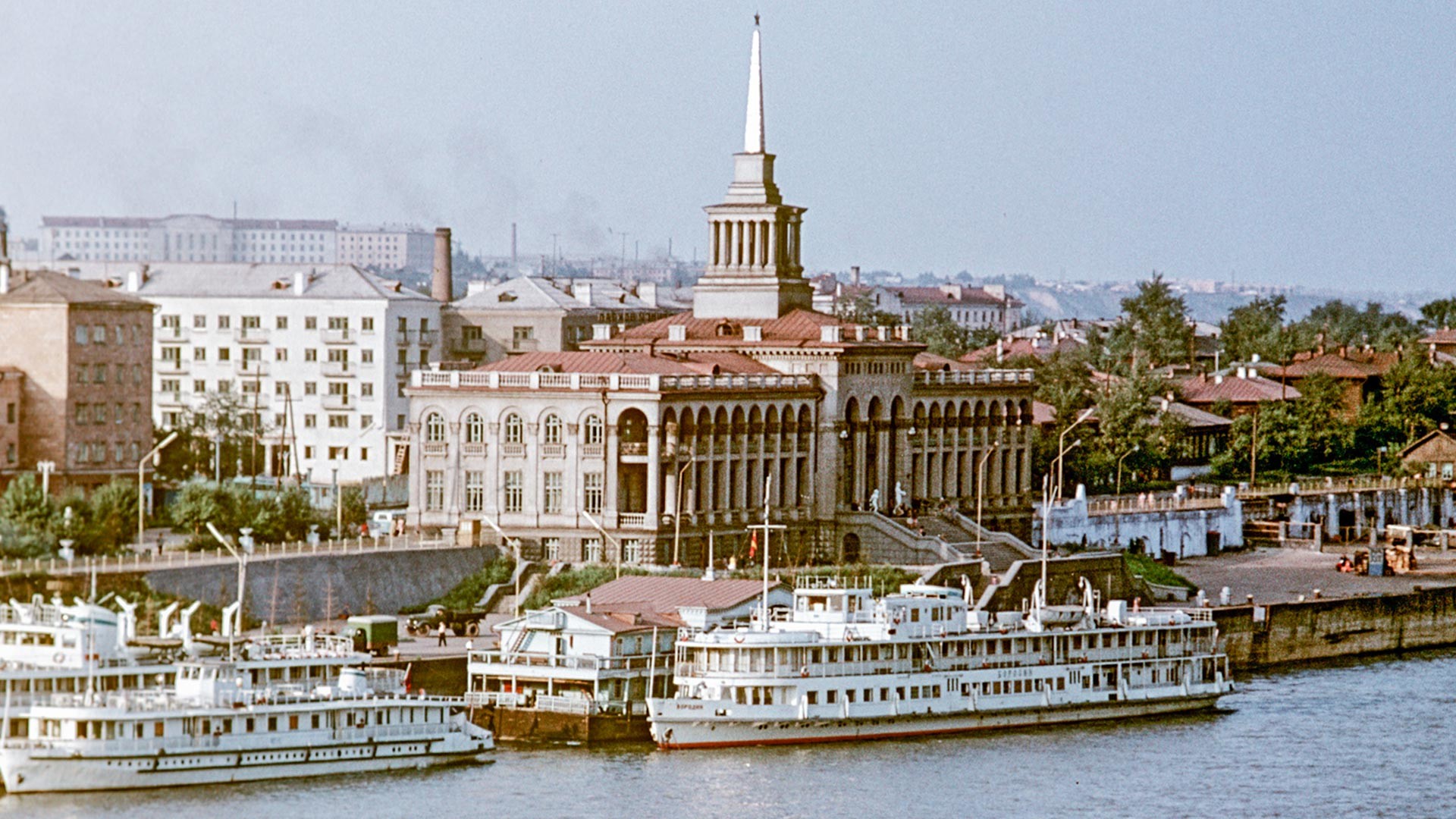 View of a river terminal in Krasnoyarsk, East Siberia, 1965.

In Siberia, it’s possible to travel down the Yenisei River. In Soviet times, dozens of river terminals were built for river boats, as well as small boats. One of the biggest hubs was in the Siberian city of Krasnoyarsk that resembles the Moscow terminal. In 1958, this building won the silver medal at the World Fair in Brussels. 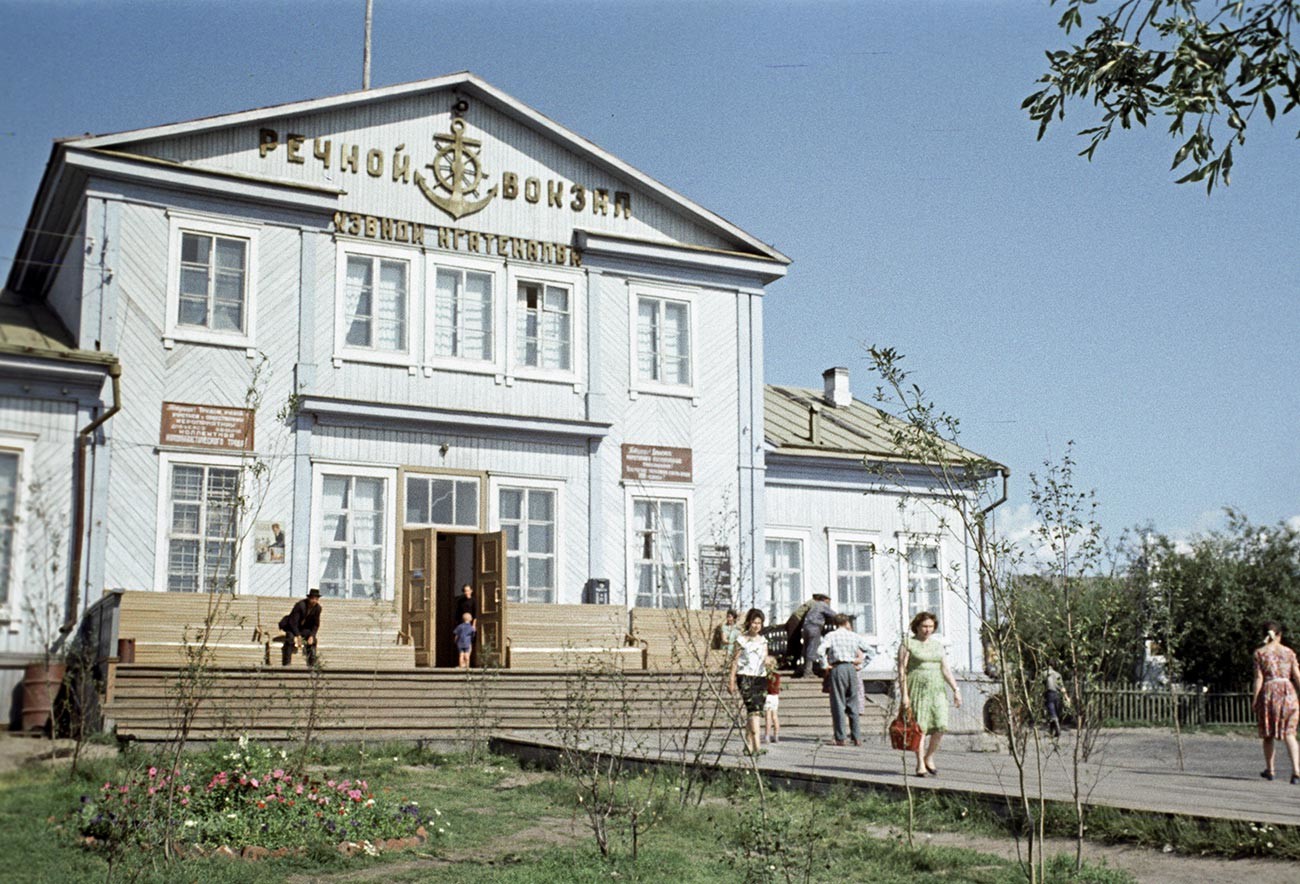 The river passenger terminal in Salekhard, 1964.

The only city located right on the Polar Circle, the homeland for mammonts and the Northern Lights, had also its river terminal for passenger lines. Navigation season was rather short, however, travellers could visit Omsk, Surgut, Nizhnevartovsk and other big Siberian cities. 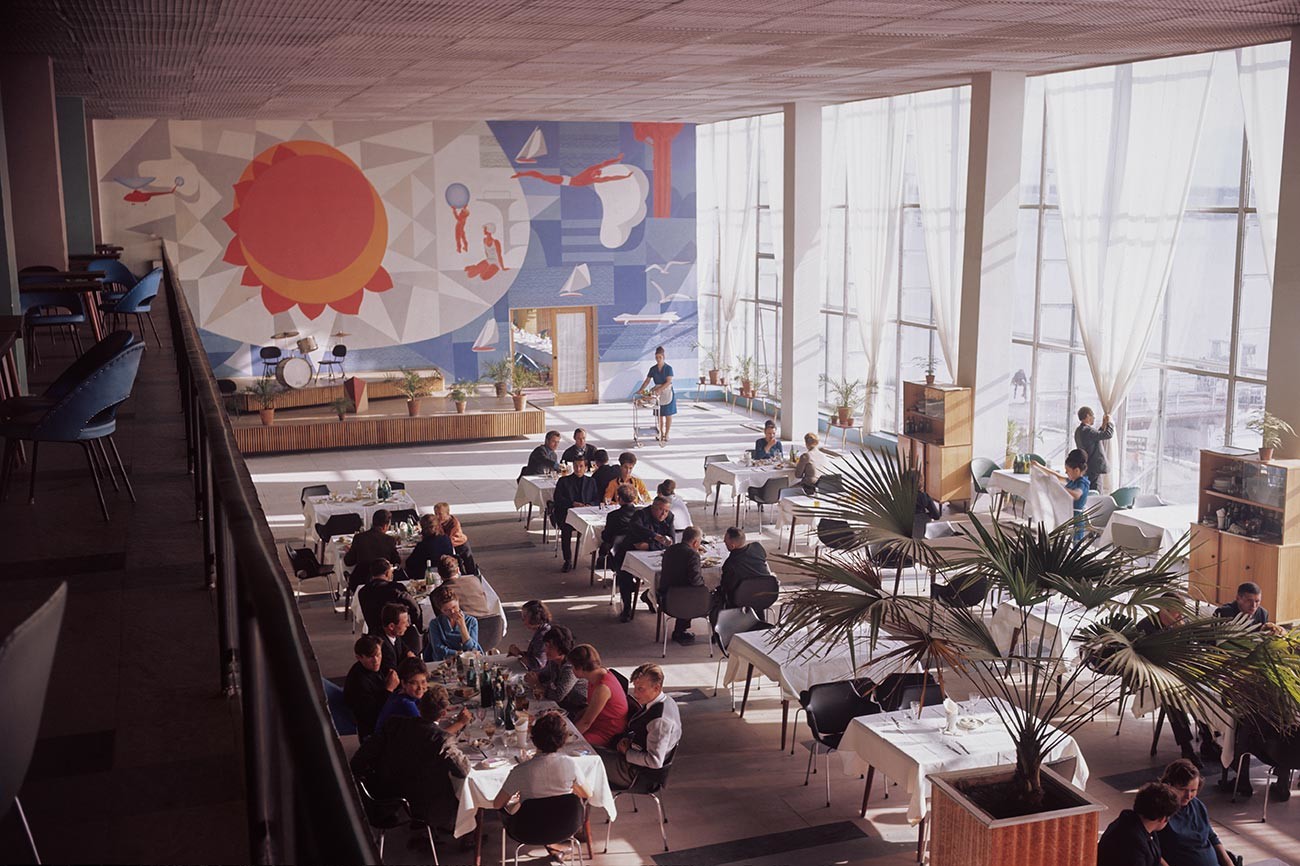 People visit a restaurant inside a river terminal in Omsk city, located at the confluence of the Om and Irtysh rivers, 1968.

Inside the terminal, it not only has booking offices and a waiting lounge, but also cafes and stores. This is a view from above of the main restaurant in the terminal of the Siberian city of Omsk! They even placed palm trees right in the hall. 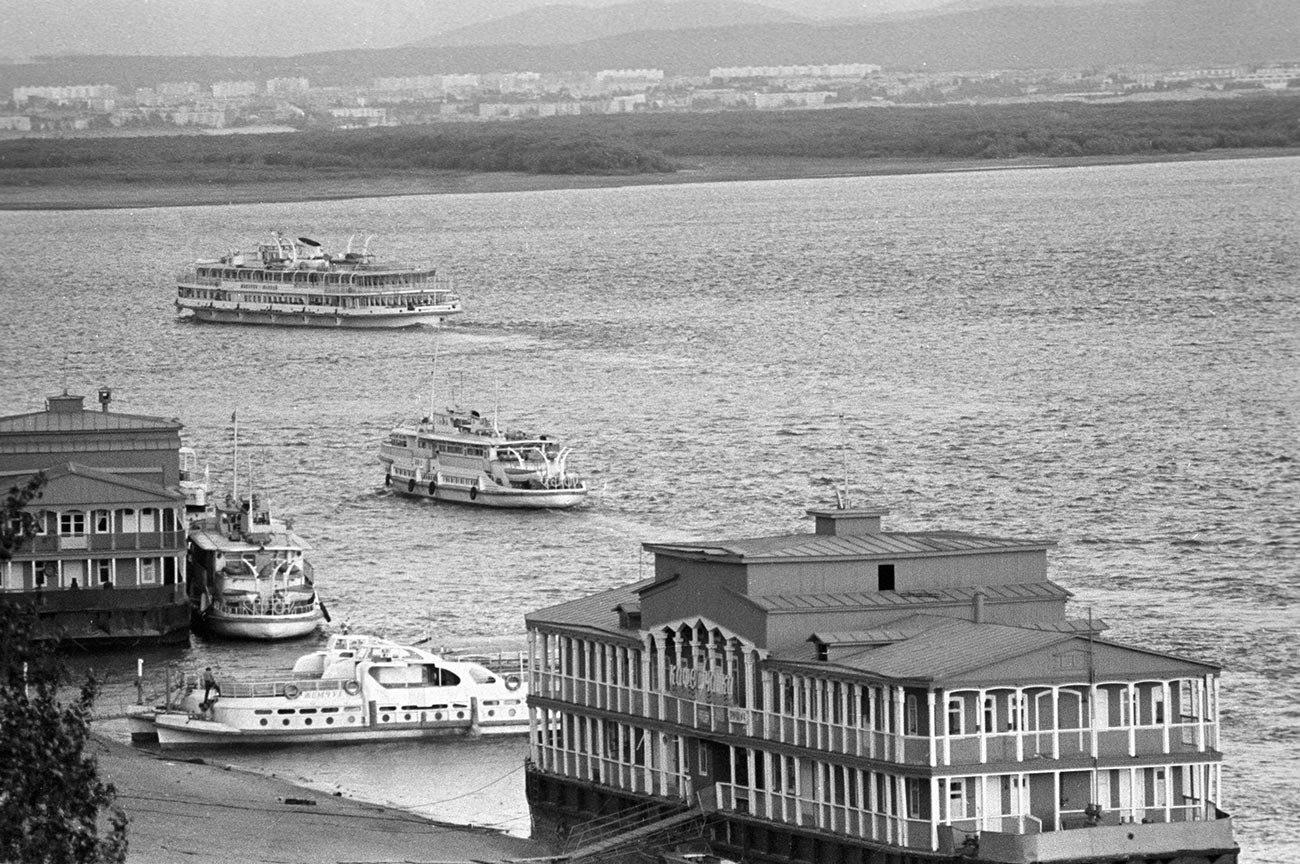 In the Soviet Union, Khabarovsk was the central hub for river boats in the Far East, offering voyages along the Amur River. Besides local tourists, it hosts many people from Japan and China, as well. 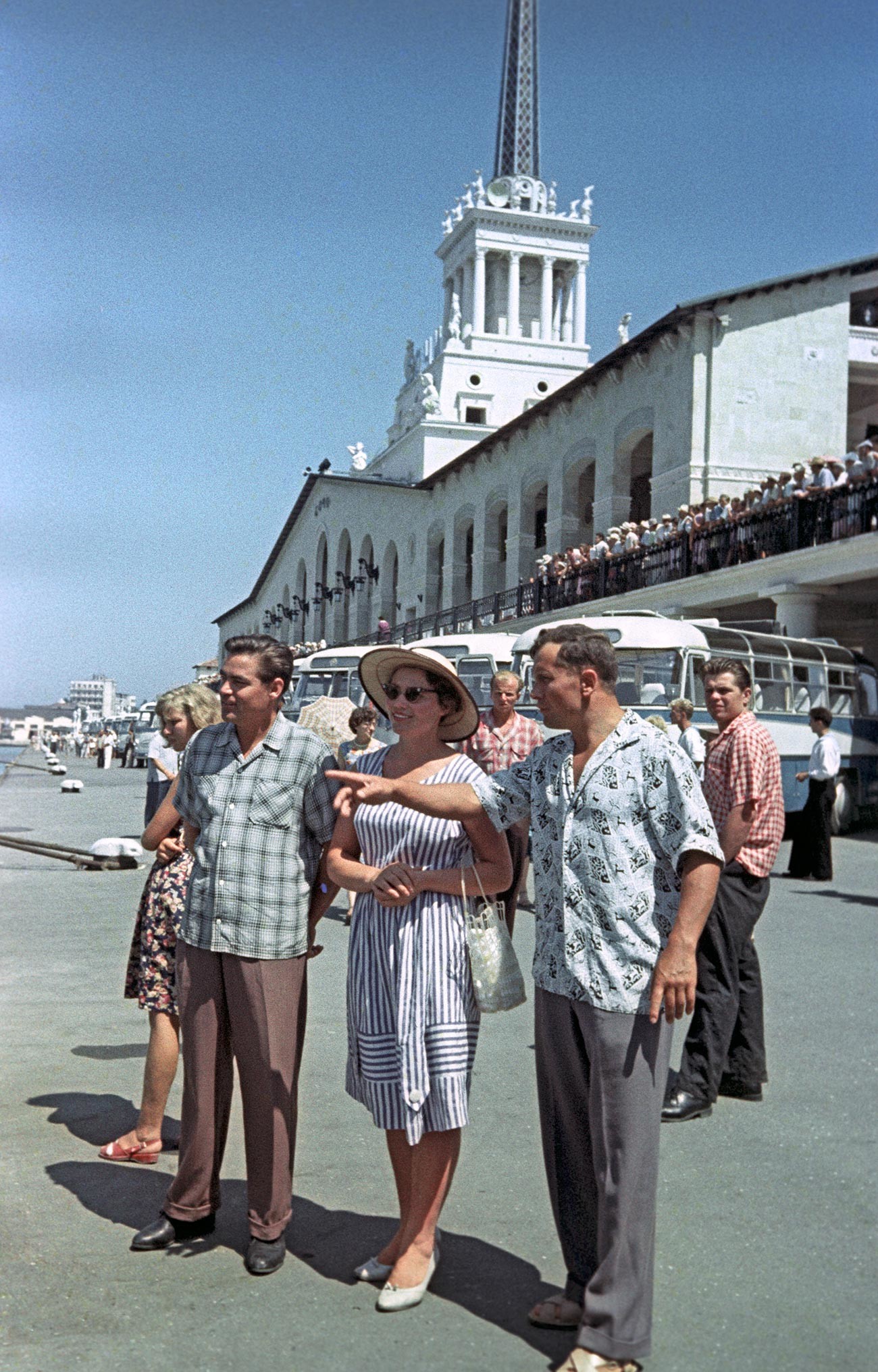 Even though this terminal isn’t strictly speaking a river port, it does host river boats that go up the Sochi River. Its huge spire is the most recognizable landmark of the Black Sea resort of Sochi.  Visiting this building was included in the guided tours for Soviet and foreign tourists who went to Sochi. Built in 1955, it is still a popular place for evening promenades for vacationers!