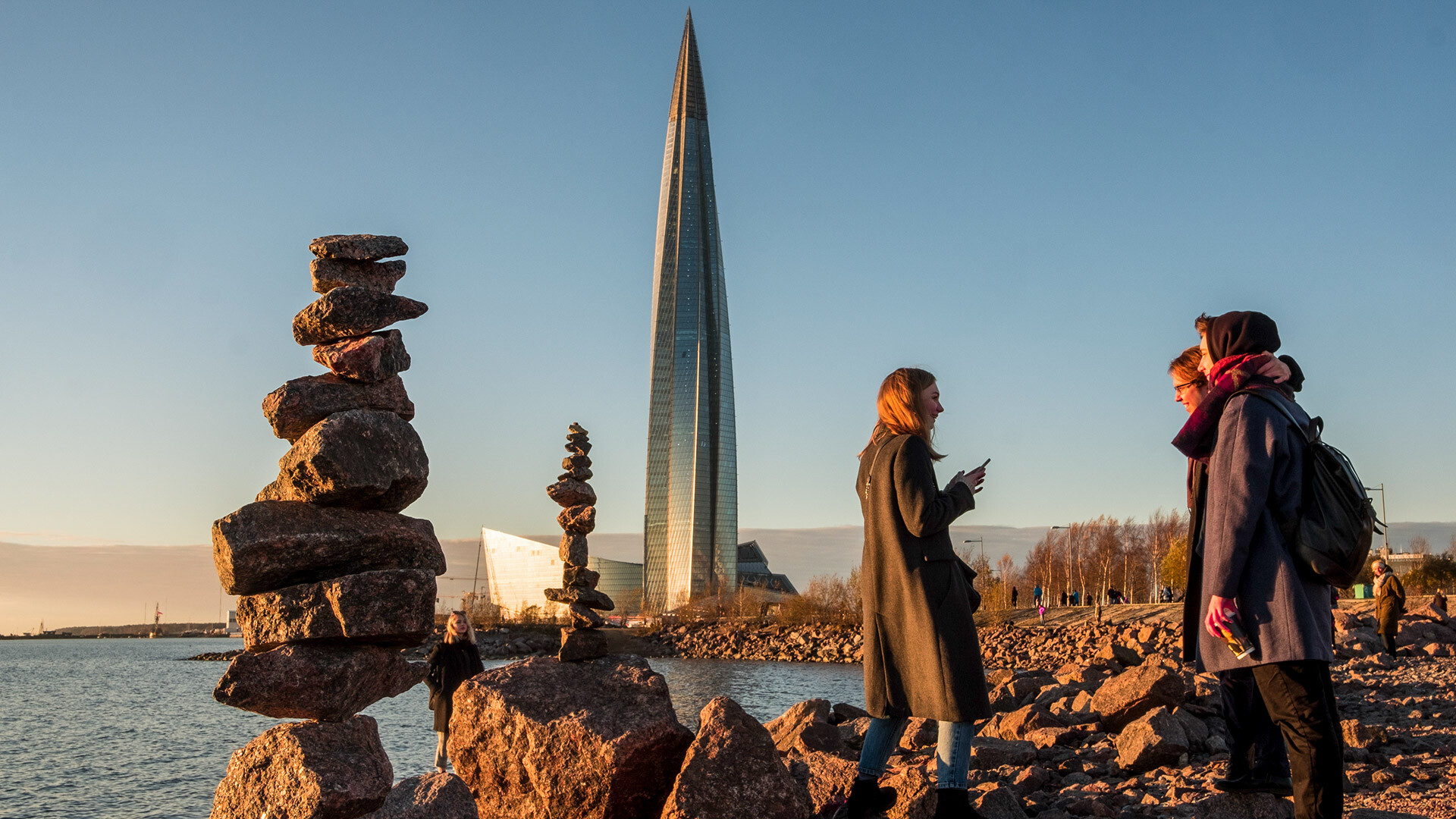 Legion Media
The Lakhta Center is a skyscraper visible from virtually anywhere in St. Petersburg. It’s the tallest building in Europe – 462 meters high – and the world’s northernmost skyscraper. It’s also one of the main architectural attractions of modern St. Petersburg.

Plans for the tower of the Lakhta Center call for a restaurant with a panoramic view and an observation deck at the height of 360 meters. With its viewing angle of 360 degrees, you can walk around in circles and admire every district of the city.

Unfortunately, right now the tower is still closed – the final interior work hasn't been completed. But you can admire the Lakhta Center from different spots in St. Petersburg. We suggest seven places from which you can take a nice photo of the city’s main skyscraper.

1. Lakhta: stand next to the skyscraper and visit the monument to Peter the Great

To really fully appreciate the skyscraper’s size, head to Lakhta – a historical district in St. Petersburg. There you can take a photo of the skyscraper from as close as possible. Best to choose a sunny day for your visit: the building’s glass facade reflects the sky, and turns silver and blue.

You can take an excellent photo next to the Peter the Great monument near the skyscraper. The sculpture is there for a reason: according to legend, in 1724 near Lakhta, a small vessel was wrecked. Peter the Great, upon seeing people drowning, hurried to their rescue. It’s believed that after this incident the ruler caught pneumonia and died in 1725.

2. Park of St. Petersburg's 300th Anniversary: the best angle of the Lakhta Center 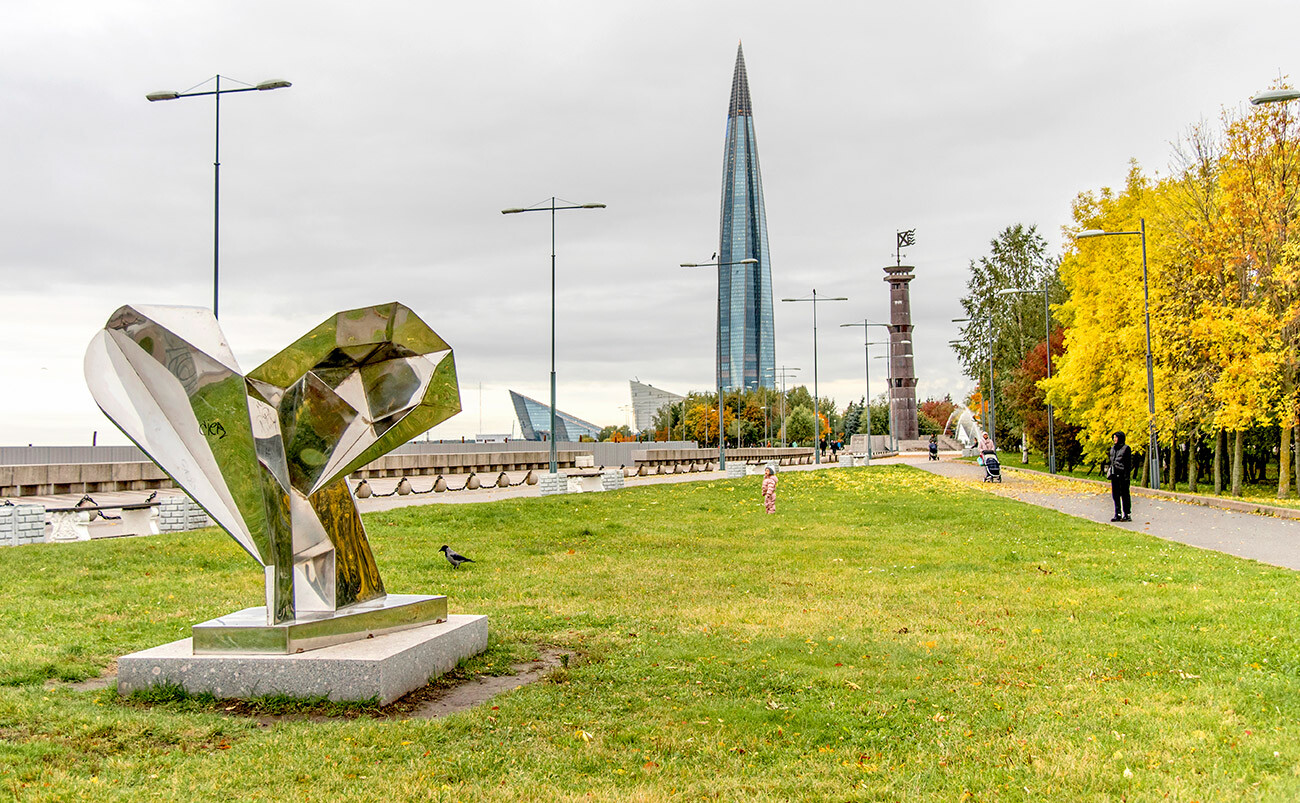 The majority of photos that people make of the Lakhta Center are taken from the Park of St. Petersburg’s 300th Anniversary. From here, you can enjoy a view of the entire skyscraper; so you’re guaranteed to have beautiful photos of the building. Stroll along the embankment near the Gulf of Finland, take a walk in the park and make sure to visit the fountain next to the lighthouse column.

3. The ferris wheel at Divo Ostrov: look at the skyscraper while in the air 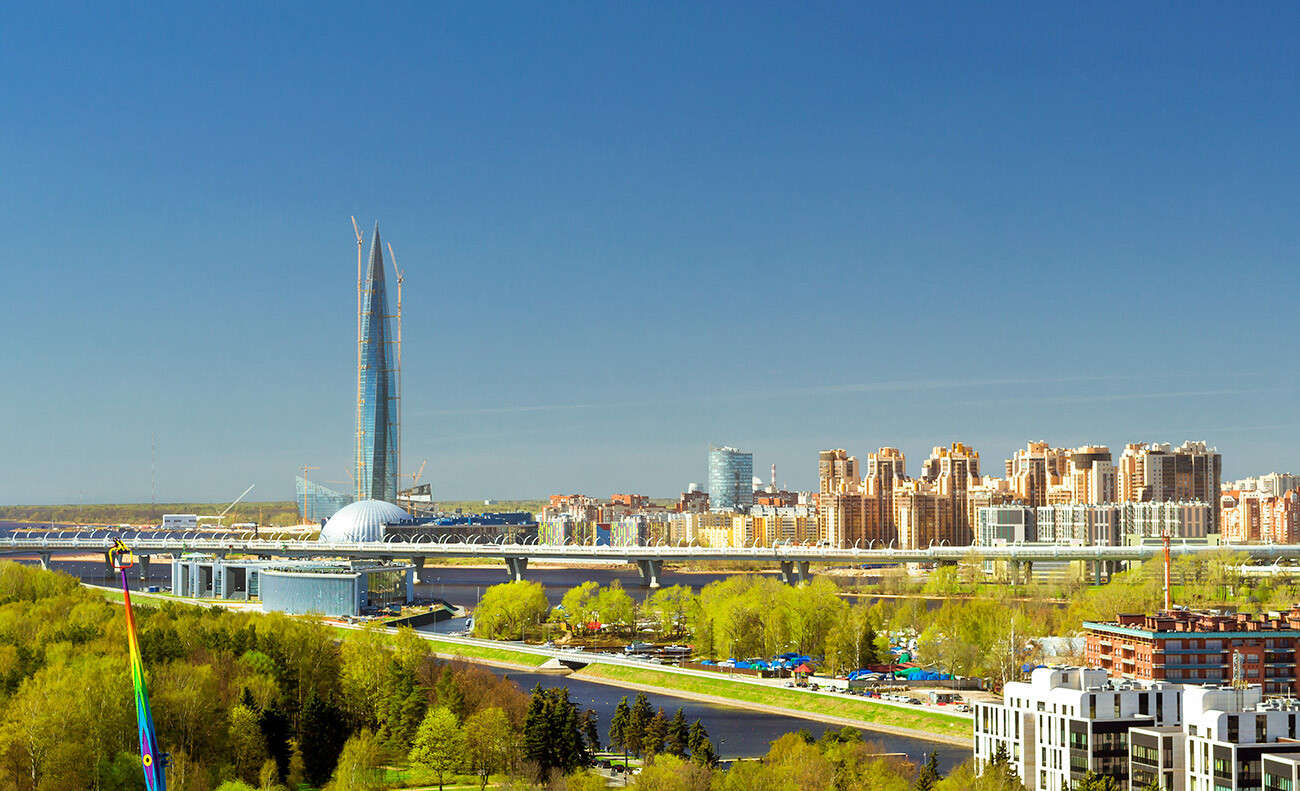 If you’re traveling with kids or prefer extreme tourism, then visit the Divo Ostrov amusement park. Apart from roller coasters, springboards and trampolines, there’s a ferris wheel with an astonishing view of the city. At that angle, you’ll be able to catch the city’s two modern architectural highlights: the Gazprom Arena Stadium and the Lakhta Center. Afterwards, you can take a walk in the Maritime Victory Park. In its center you’ll find a large fountain; and Gazprom Arena is behind it.

4. Yakhtenniy Bridge: take a selfie with the skyscraper 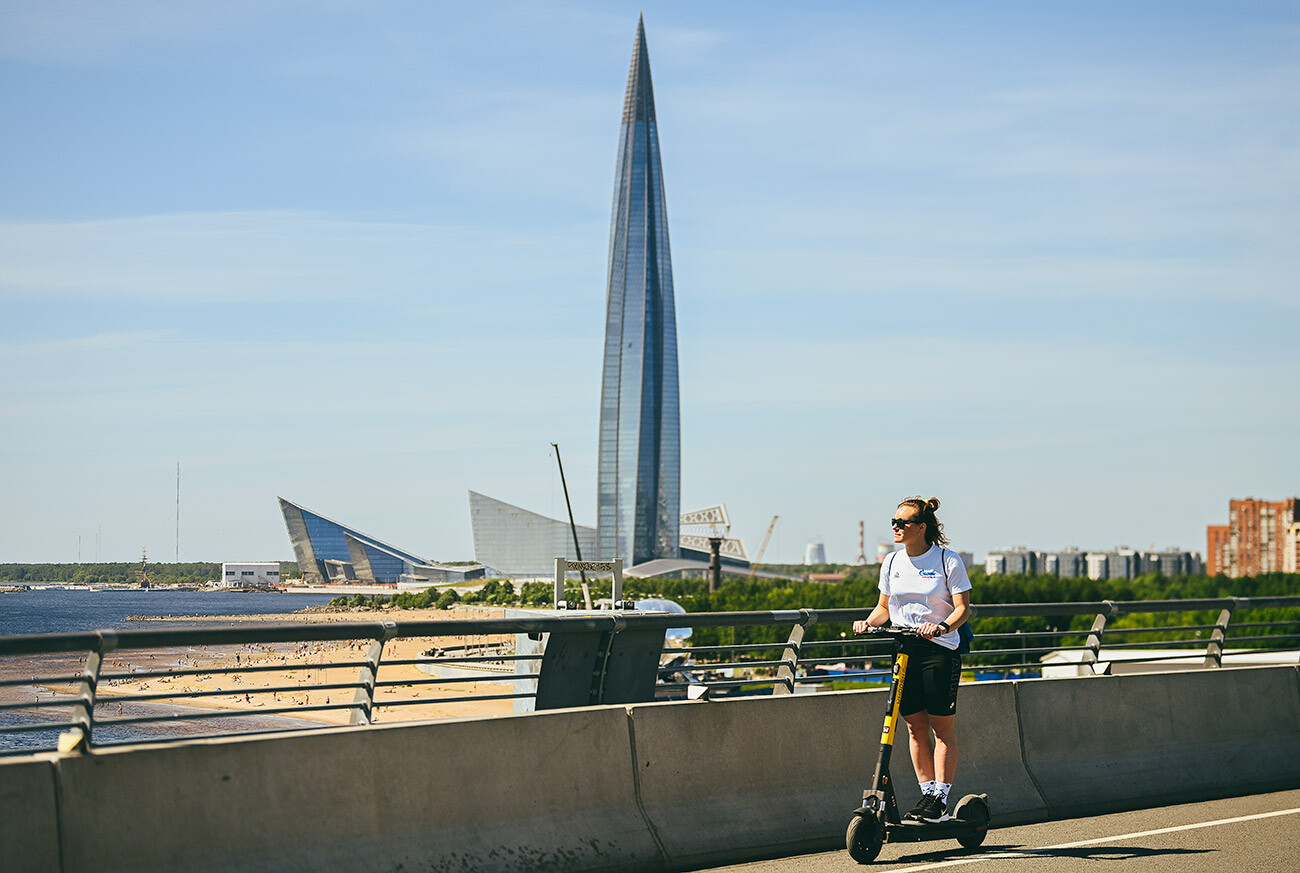 The Pedestrian Yakhtenniy Bridge was built for the 2018 FIFA World Cup, and it connects the 300th Anniversary Park and the stadium. From Yakhtenniy Bridge you have a view of the Gulf of Finland: the sky beautifully blends with the sea. From this spot, you can take great selfies with the Lakhta Center in the background. Just hold your hats – it gets really windy there. If you build a route from the 300th Anniversary Park to the Maritime Victory Park, you can take shots of the skyscraper from three notable spots at once.

5. Lake Lakhta: ride a SUP board and see the skyscraper from the water 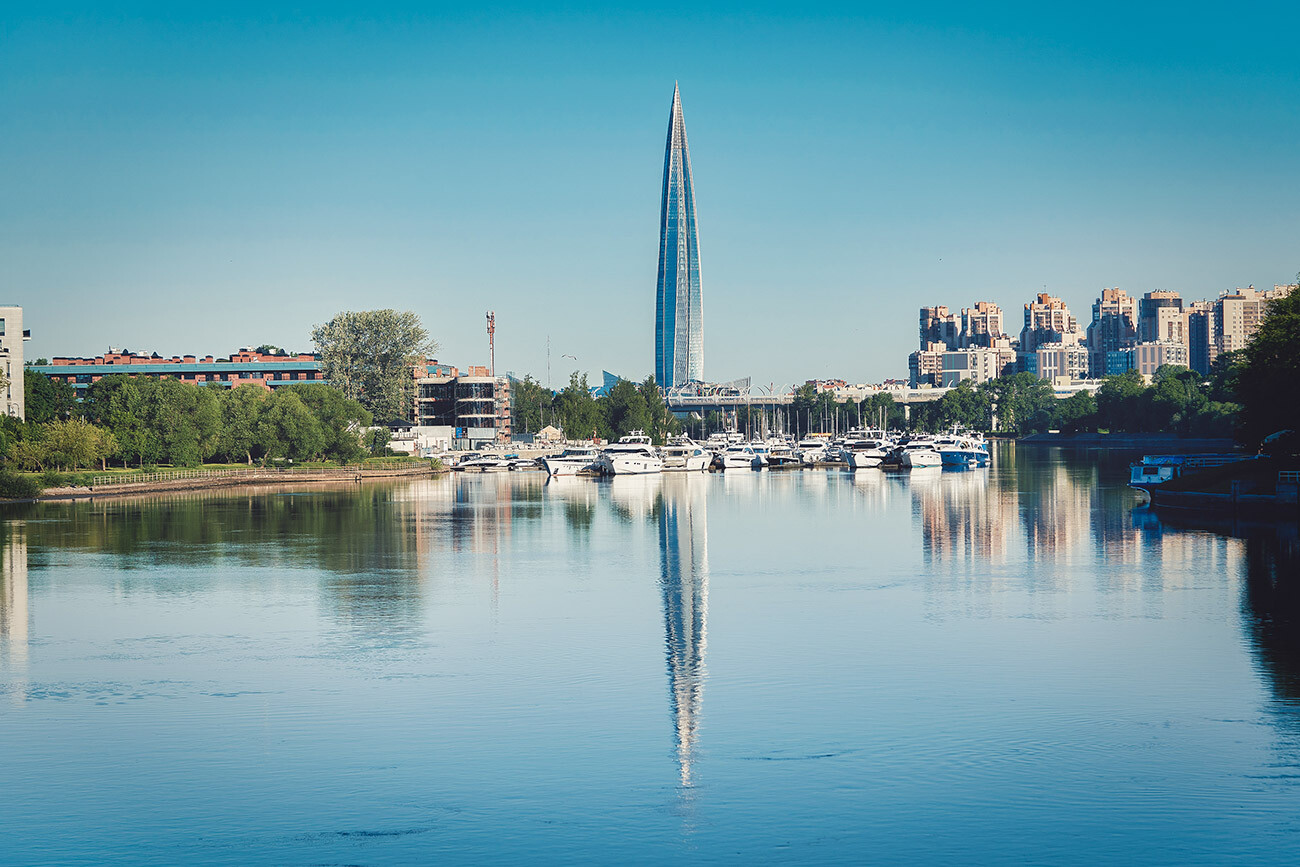 If you like outdoor recreation, head to Lakhtinsky Razliv. There you’ll find places where you can rent a SUP board, a kayak or a boat. In addition to taking beautiful photos of the Lakhta Center from the water you can also enjoy the extraordinary natural beauty of Russia’s north. We suggest you also go down the Yuntolovka River that empties into the lake. It’s quiet there and there aren’t many people – a perfect spot for nature photography.

6. Smolenka River: stroll along Vasilievsky Island and admire the skyscraper 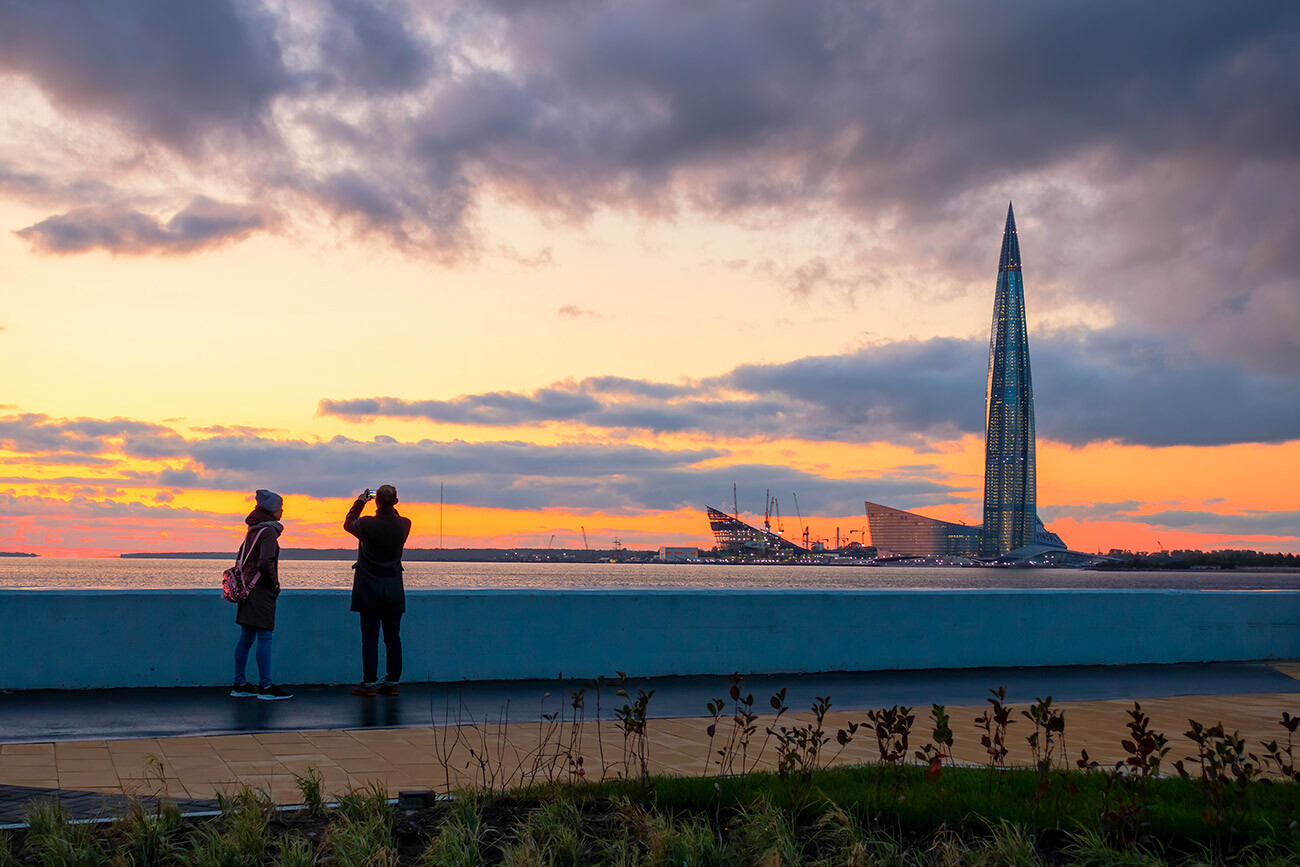 Fun fact: the part of St. Petersburg that starts at Primorskaya metro station stands on reclaimed land. The western part of the Vasilievsky Island originally wasn’t populated, but this land began to be developed in the 1960s. Construction continues even today: the authorities plan to create Severny Namyv – a large district with an entrance to the gulf. Near the mouth of the Smolenka River is a small embankment with a view of the Gulf of Finland and the skyscraper. There you can take photos, stroll along the water and watch the new city district being built. Even if you won’t reach Smolenka, you still can enjoy another stunning view: the Western High-Speed Diameter motorway passes through, which is a quick way to reach St. Petersburg from the airport.

7. Kronstadt: visit the historic city and see the Lakhta Center from the other side 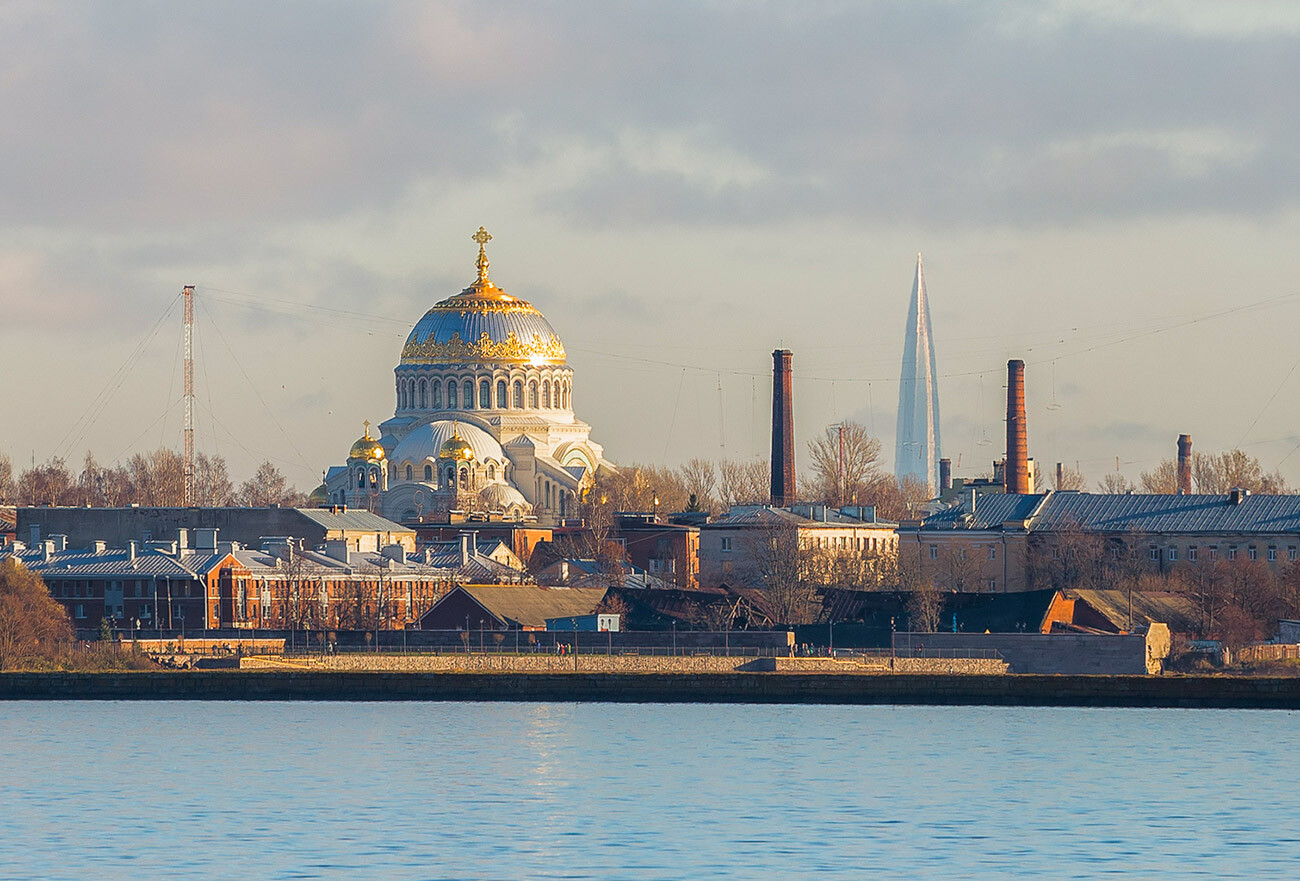 If you’d like to take an unusual photo of the skyscraper, we suggest you visit Kronstadt, a small city near St. Petersburg. There you’ll find old Imperial era forts, the restored St. Nicholas Naval Cathedral and the recently opened Ostrov Fortov (the Island of Forts) park. You can take a photo of the Lakhta Center from the embankment or from the observation deck of St. Nicholas Cathedral.