How long did it take to get from Moscow to St. Petersburg throughout the centuries? (INFOGRAPHICS) 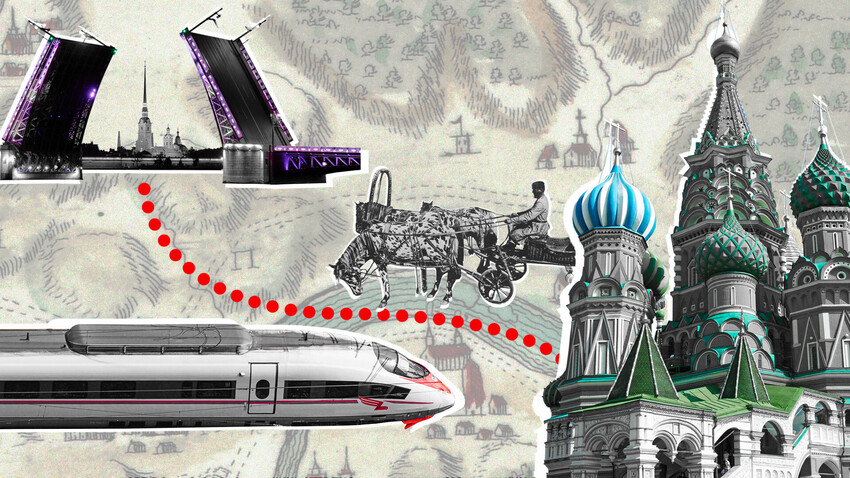 Kira Lisitskaya (Photo: Sergey Smirnov, Nekrasov, ImageBROKER/Global Look Press; A.Vilf/Sputnik)
The 635 km road between St. Petersburg and Moscow is perhaps the most popular travel route in Russia. Let’s compare how long it took to get from one city to another a few centuries ago and now.

Russian Railways recently announced a new speed train railway between Moscow and St. Petersburg will be launched by late 2027. The journey is expected to take just 2.5 hours in total (with an estimated 2 hours 15 minutes ride time without stops). As of today, the project is going to break a record in terms of the duration of a journey between the two capitals. So, how long did it take to travel from “the northern capital” to Moscow (and vice versa) in the different epochs? 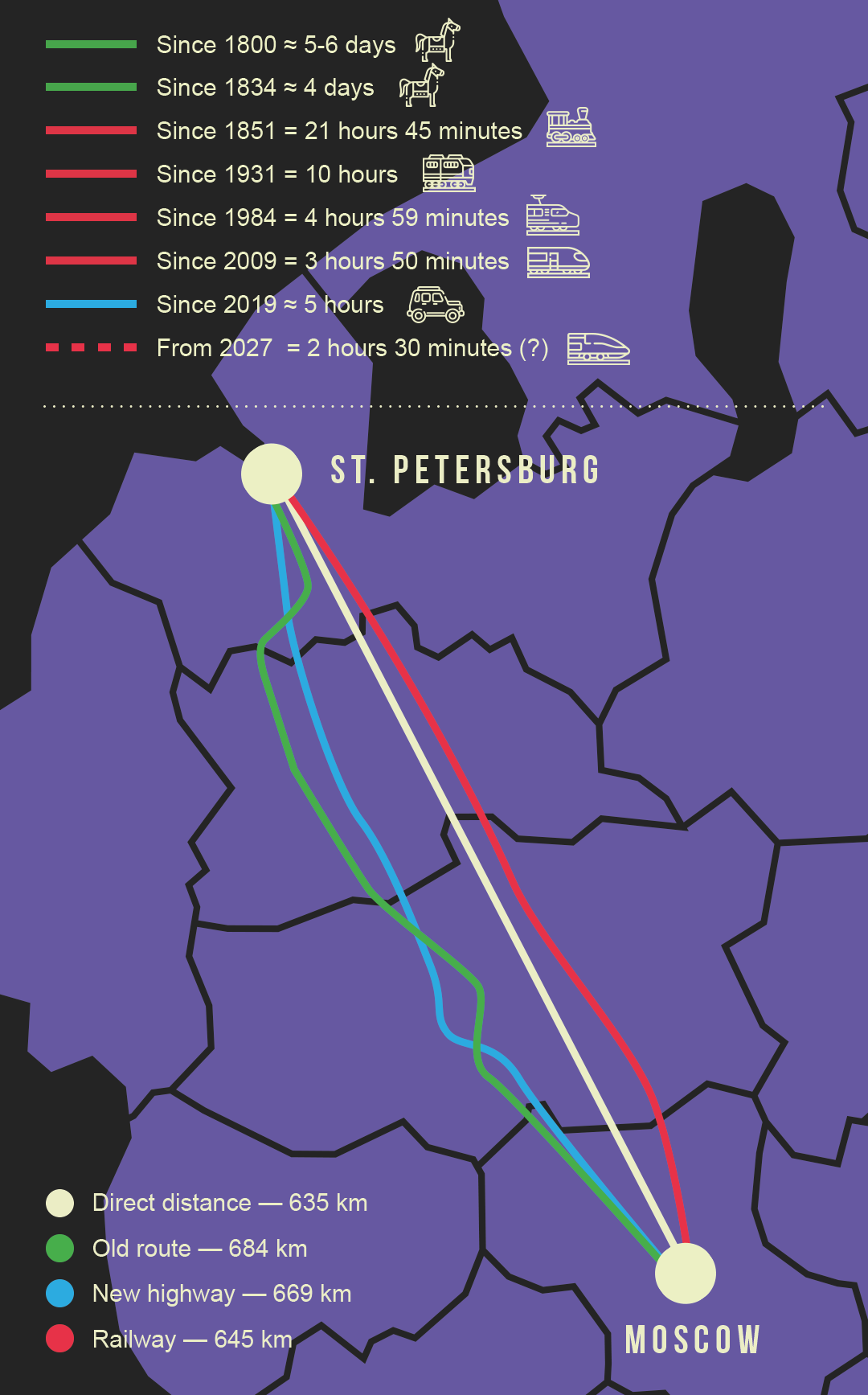 In 1703, Peter the Great founded St. Petersburg and transferred the Russian capital there. The city began to develop, with its population swiftly growing, but a great many noble families continued on living in Moscow. Additionally, the main orthodox cathedrals, where tsars were crowned and buried, remained there. So, Peter the Great would make the journey from St. Petersburg to Moscow and back by horse carriage, making it the most frequently used route for centuries. 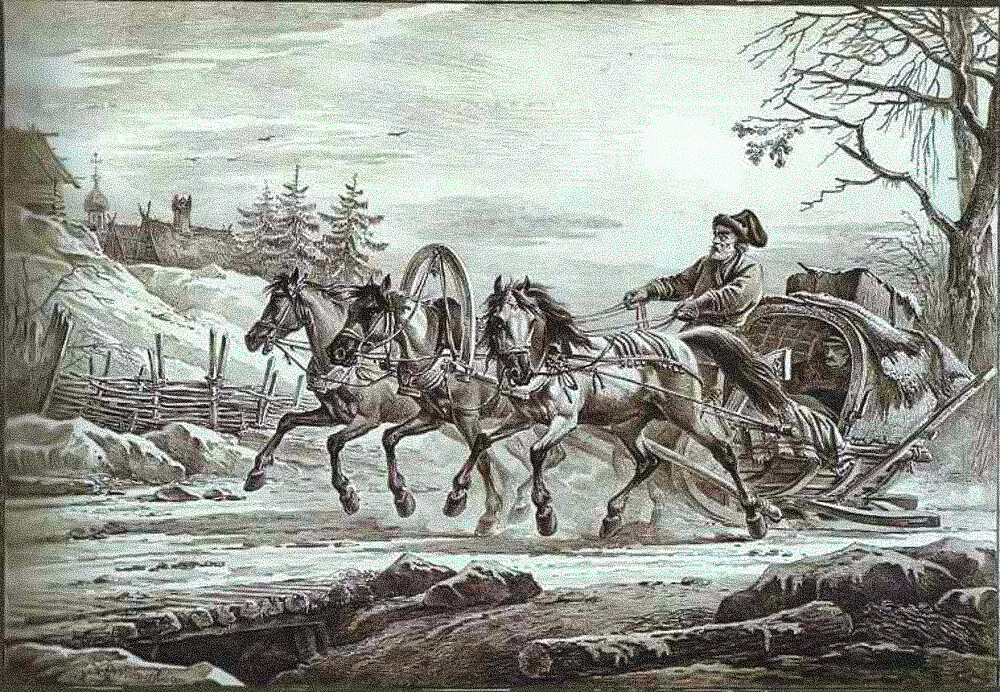 In the 18th century, the journey took on average four and half to six or more days. To a great extent, it depended on weather conditions; for instance, it took the least amount of time to glide on winter ice and snow. Empress Elizabeth of Russia held the record in the 18th century for the shortest journey from St. Petersburg to Moscow. 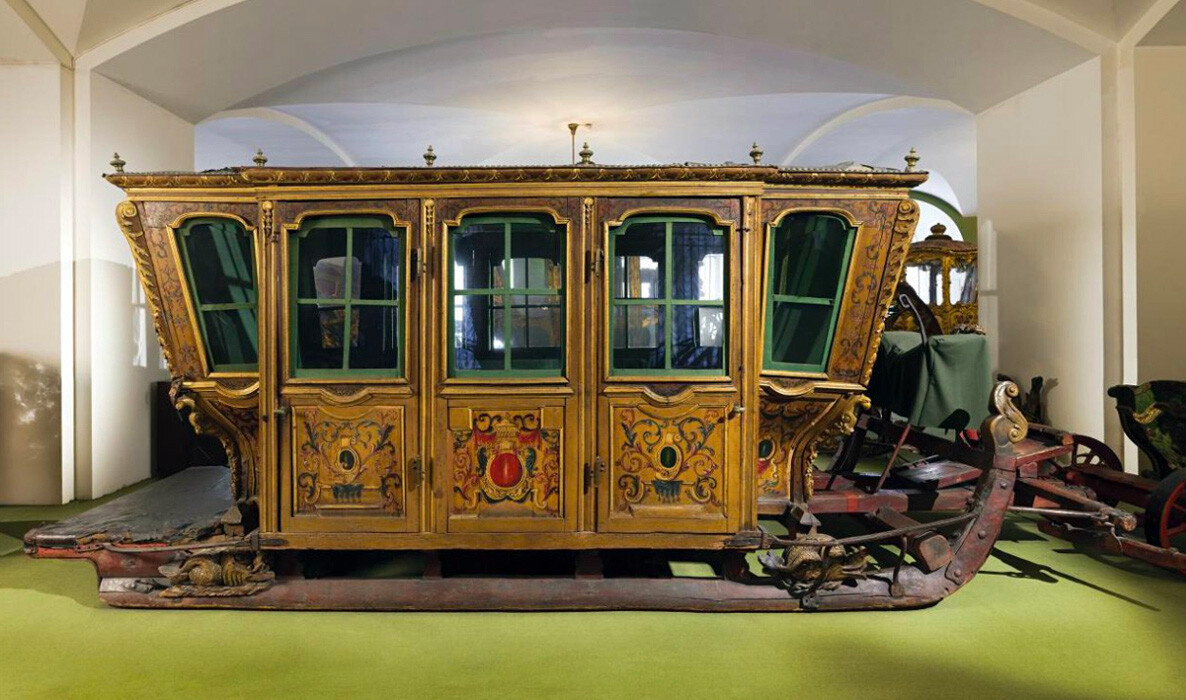 In 1742, it took her and her entourage merely three days to reach her coronation place in a sledge. They rode quite a few horses to death at that time, traveling only during the day and resting at night.

One could reach the destination fast enough with a troika, pulled by three horses, as they developed a speed of 45-50 km/h. However, not everyone could afford such a ride, most often going for a pair of horses or just one.

During the off-season, in spring and fall, the road was covered with impassable mud and it cost more and took longer to travel along it. “No less than six days did I wend my way along a filthy road, arriving in St. Petersburg half dead,” Alexander Pushkin wrote in his sketch ‘The Journey from Moscow to Petersburg’. All in all, the poet traveled between the cities over 20 times: in a tilt cart or by changing horses (a sort of “horse sharing”, when one would change horses at post stations) or in his own comfortable carriage. 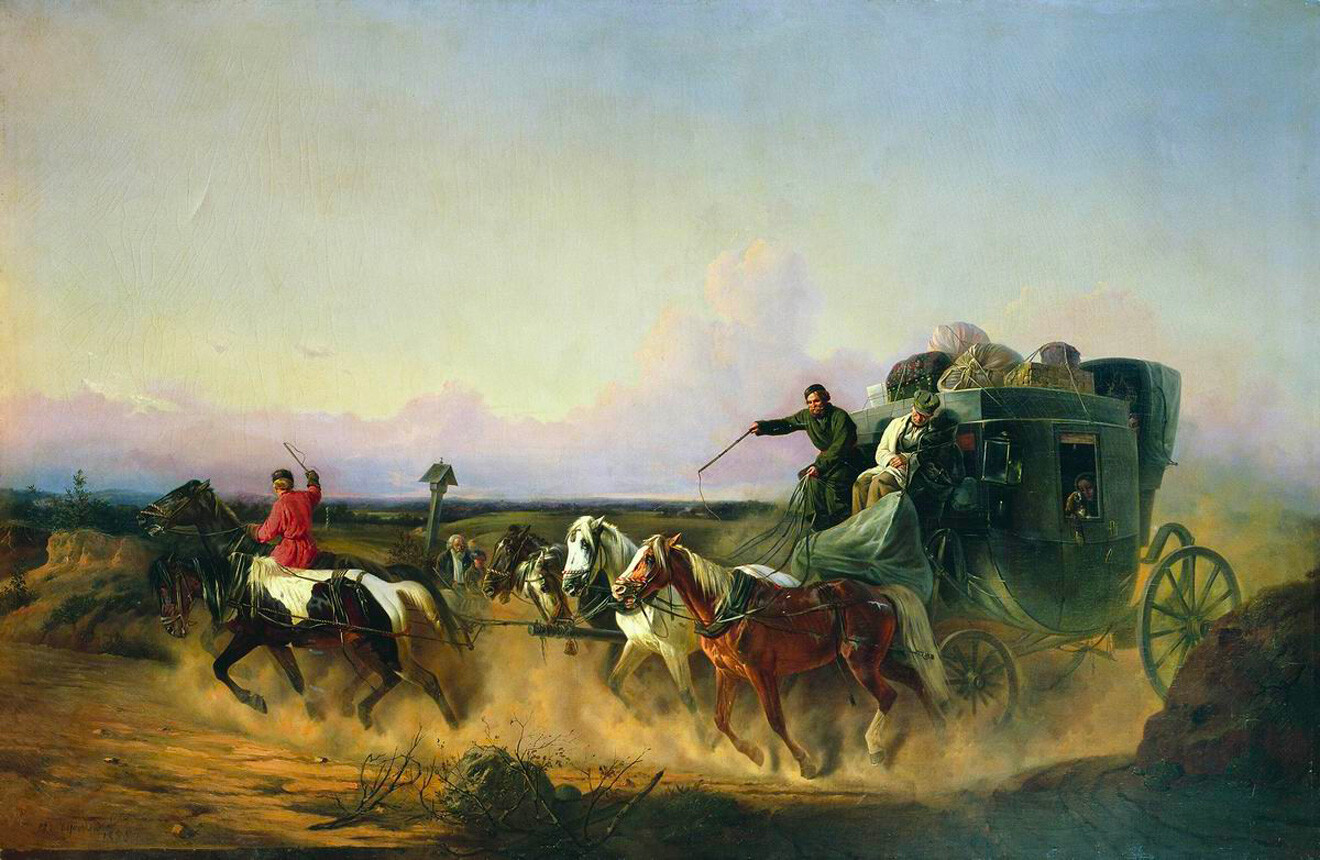 Nikolai Sverchkov. A Landowner on the Road. 1855

In 1820, the first “public transport” emerged, namely stagecoaches, which could carry 4-12 passengers and ran between the cities according to a schedule. The journey in a stagecoach took about 4.5 days.

Back in 1834, the first “even highway” between the cities was built: part of the road was paved with stone, while the rest was covered with pebble stone. Pushkin made up his mind to test it and reached the destination - in merely four days!

The mid-19th century saw a real technical breakthrough. In 1842, Nicholas I signed an order to build a railway between Moscow and St. Petersburg. Years earlier, the first railroad in Russia had been built, connecting St. Petersburg with its suburb, Tsarskoye Selo. Regular trains started running between St. Petersburg and Moscow in 1851, with the journey taking 21 hours 45 minutes. After Nicholas I’s death, the railroad adopted his name - Nikolaevskaya - and, in Soviet times, it was renamed Oktyabrskaya, as we know it today. 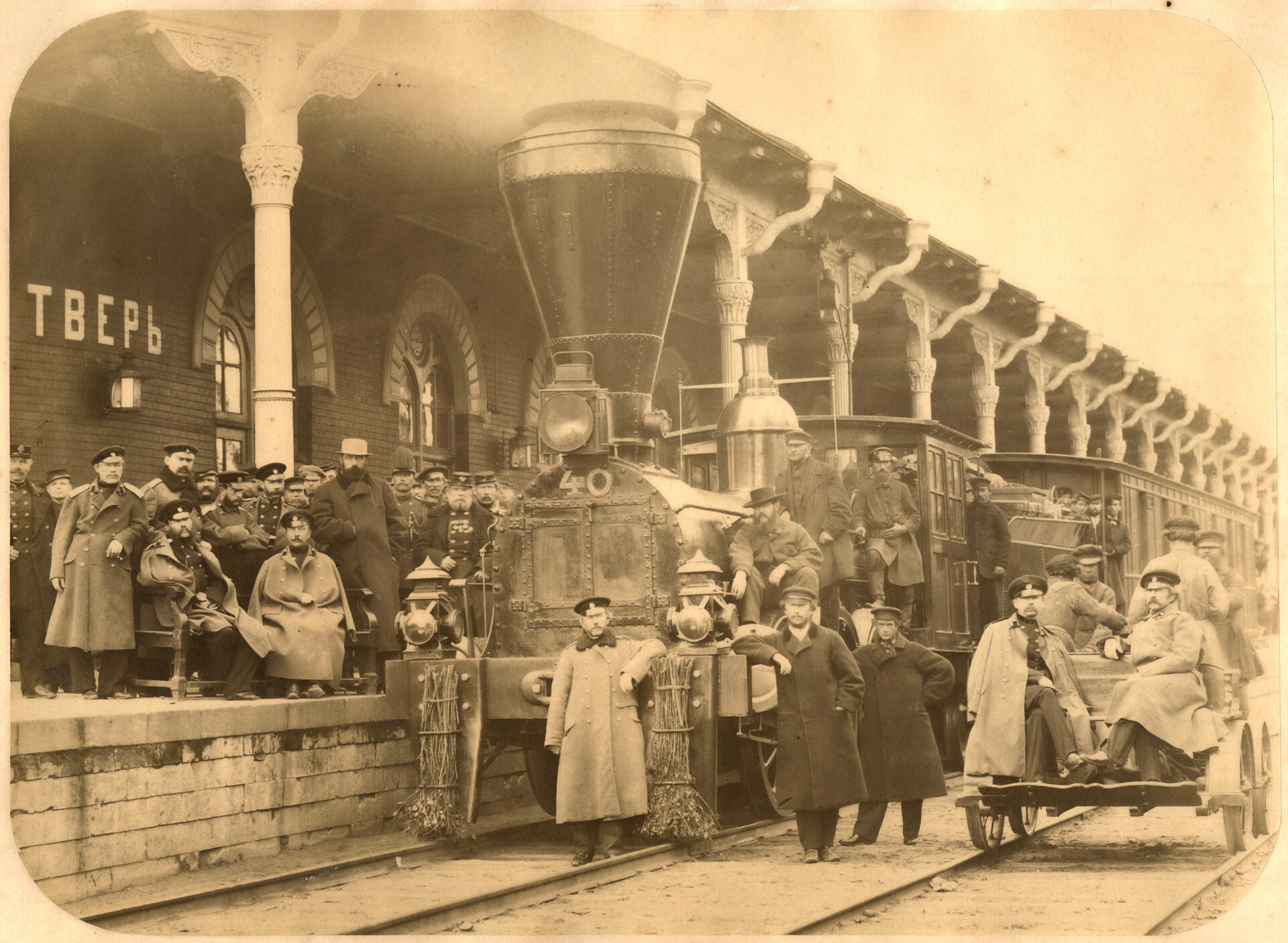 It became incredibly trendy to travel between the cities by train. It’s not by chance that, in the 1870s, Leo Tolstoy wrote his novel ‘Anna Karenina’, where the railway was a significant part of the narration.

In the USSR, the importance of railways was fully acknowledged, with focus put on reducing the time of a journey. In the 1920s, passenger trains between the two capitals traveled for 15 hours on average. Back in 1920, an experimental electric train managed to cover the distance in just 12 hours. In 1931, the first Soviet express train was launched, reaching the destination in a record-breaking ten hours. In the 1960s, the focus shifted from locomotives to the electric haulage, which made it possible for an electric train to accelerate to 130 km/h instead of the average 70.

In 1984, the speedy ER200 electric train covered the distance from Leningrad to Moscow in five hours 20 minutes and, later, in as little as four hours 59 minutes. It could reach speeds of up to 200 km/h. However, there were only two such trains, which ran three times a week and cost a lot to maintain and, thus, were not mass-produced. Soviet people preferred regular passenger trains to them. In 2009, the ER200 ran for the last time, giving way to the high-speed ‘Sapsan’ train. 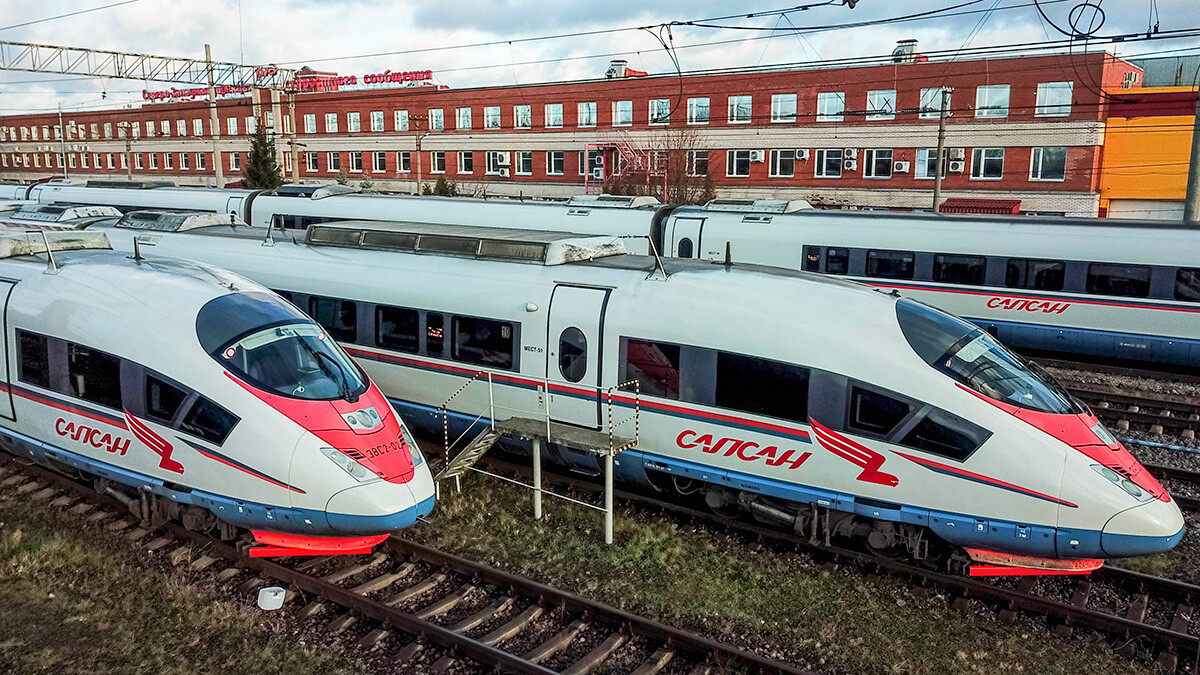 These days, a plane covers the distance between Moscow and St. Petersburg in merely 1.5 hours. Yet, taking into account the journey to the airport and then from it in the city of destination, as well as the fact one has to arrive at the airport in advance, many prefer to travel by rail. A good thing is that there always are a plethora of options to choose from: over 30 trains run between the cities daily.

Journey time on express trains is seven to 10 hours, with the length mostly depending on the number of stops. The eight-hour journey was immortalized in a popular 1995 song by Maxim Leonidov  - ‘From Petersburg to Moscow’, featuring the following lines: “Just eight hours without sleep/from Petersburg to Moscow”.

Journey time on the Soviet ‘Red Arrow’ train also roughly takes eight hours. There are also a number of different express trains: For instance, the journey on the Nevsky Express takes four hours and four minutes. The fast Lastochka electric train covers the distance in 5.5-6.5 hours, whereas the journey on the fastest train - the ‘Sapsan’ takes only three hours 50 minutes. 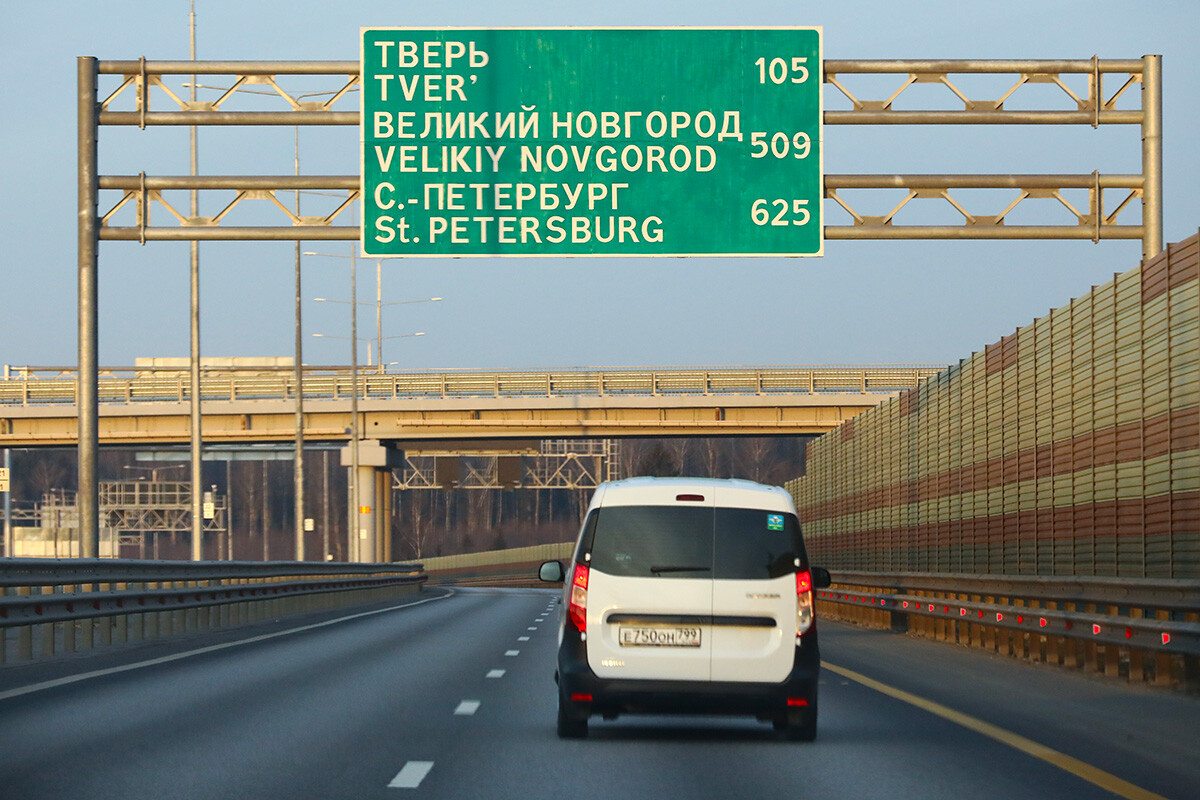 For many years, apart from the railway, the old tsar road was used for traveling on horses and then, in cars. In 1958, asphalt was added, with the road becoming known as highway M10. It is typically possible to cover the distance of 684 kilometers in ten hours. Most of the road goes through villages and towns, where a speed limit of 40-60 km/h applies.

In 2019, the express M11 ‘Neva’ toll highway was unveiled. The journey takes around five hours, with most parts having a 130 km/h speed limit. A small section of the highway in the vicinity of Tver is still being built, which forces the route to travel through residential areas.