Working in Altai: A day in the life of a private kumys farm 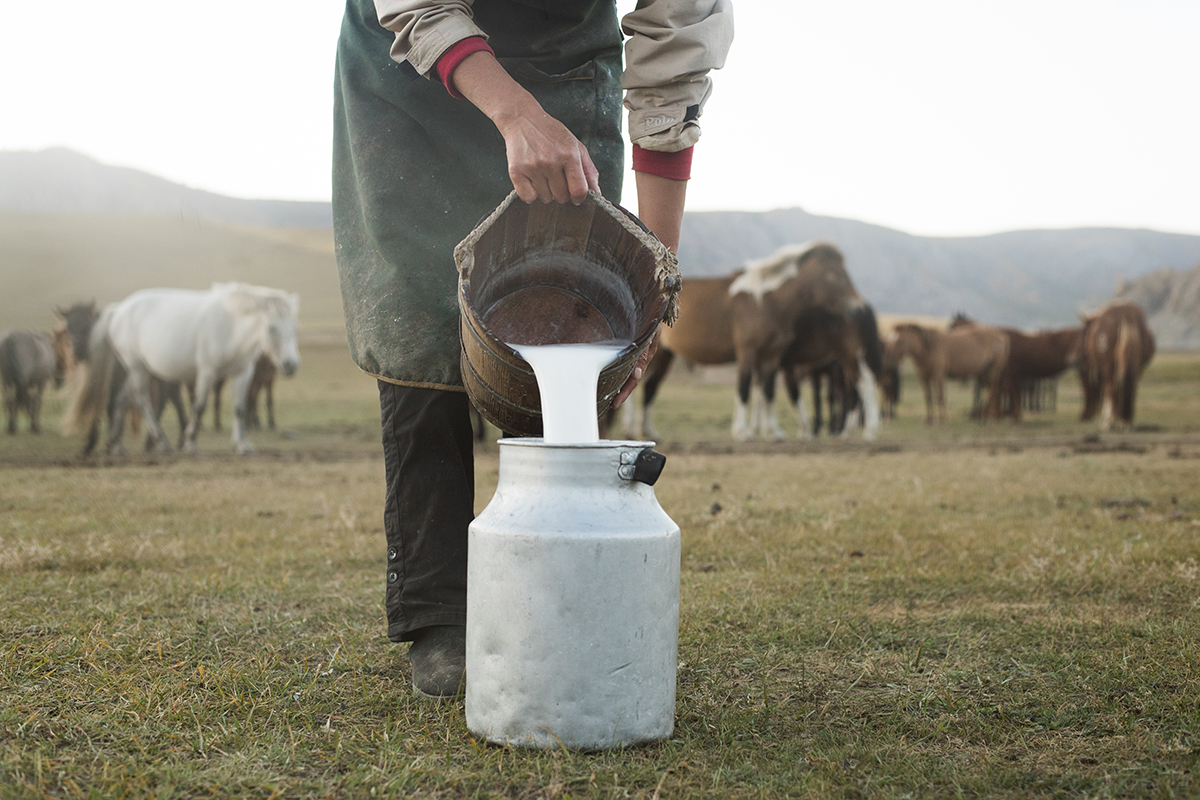 Shutterstock
Steppe for breakfast, milk for lunch and volleyball for supper.

A road across the yellow steppe

The further Chuysky Trakt takes you  from Gorno-Altaisk, souvenir shops in tents and small villages scattered along the road, the quieter it gets. This Siberian roller coaster – sharp bends in the road curving around the winding, gray-and-turquoise Altaian rivers – gives way to a meditative journey along the Chuya Steppe with its warm and soporific monotonousness. 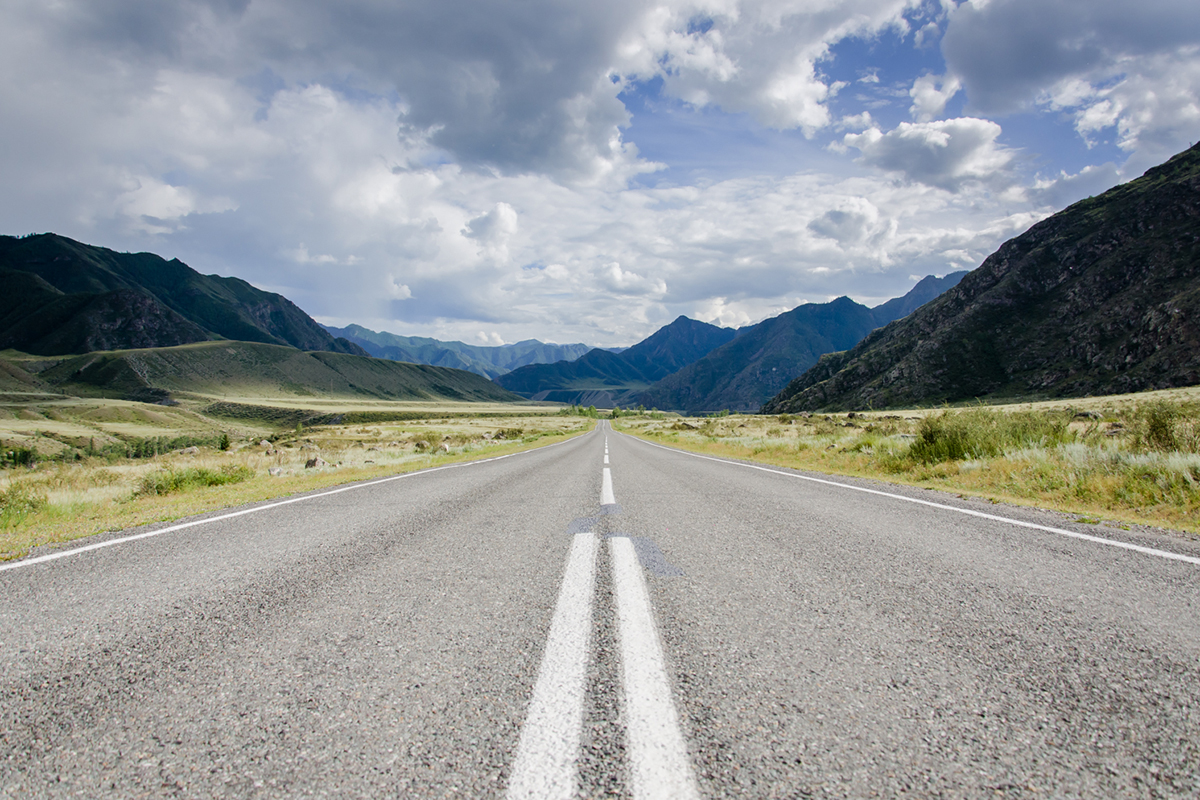 No cars. No tourists. No trees. Just a never-ending highway through a mustard-colored steppe with dry and spiky bushes. The only feature that stands out against the great plain is the mountain ranges. It’s July; photographer Daba and I are cycling down the road and scanning the vast yellow Chuya Steppe for the kumys farm.  It belongs to a Kazakh family   who are already expecting us. 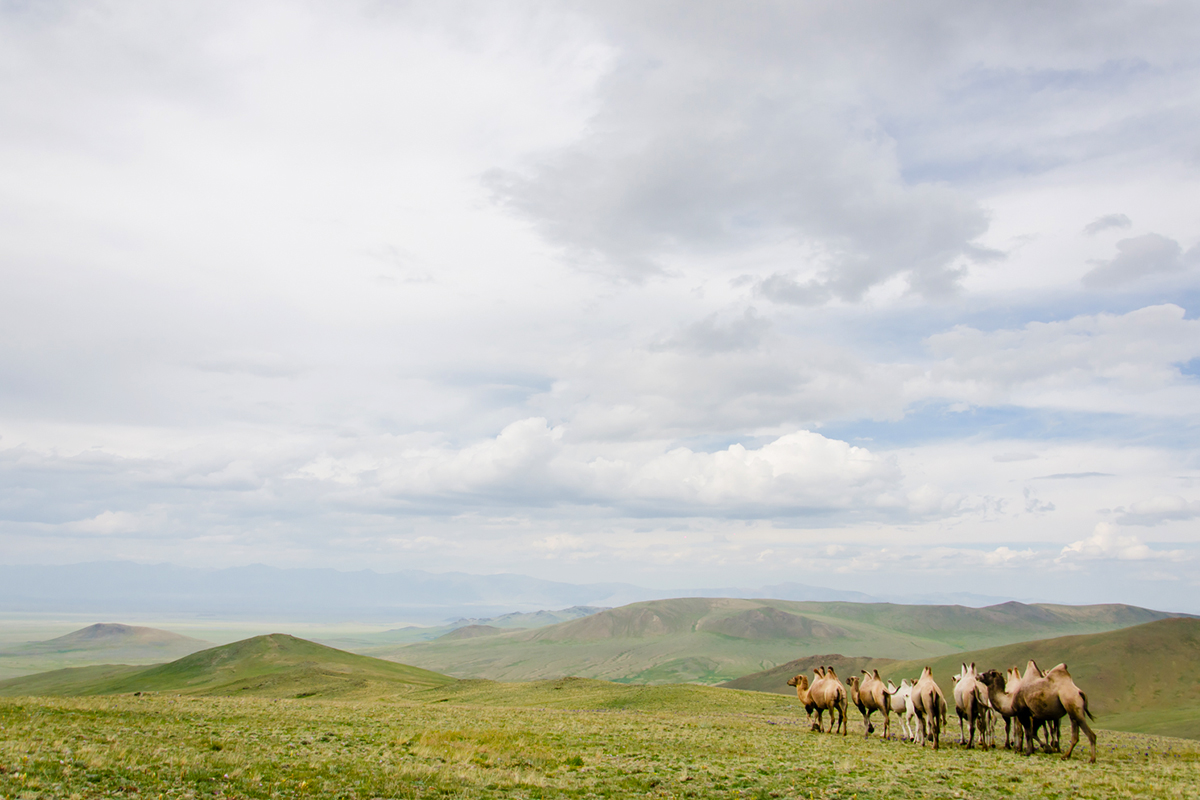 In summer, the inhabitants of highland Altai, mostly Altaians and Kazakhs (who settled here 150 years ago) leave their home village and migrate to the steppe to pasture livestock, their own or someone else’s, to work on a kumys farm or find some other employment. The Karanovs, a Kazakh family, live in the village of Zhana-Aul for the better part of the year, but move to a steppe encampment with their relatives for the summer; they take care of their camels, oversee the shepherds who work for them, and make kumys – a sour drink made from mare's milk. The family lives in a yellow house, barely visible against the steppe and somewhat resembling Dorothy's house on the Kansas prairie: It seems that a strong gust of wind could easily blow the cottage away, along with those who live in it. 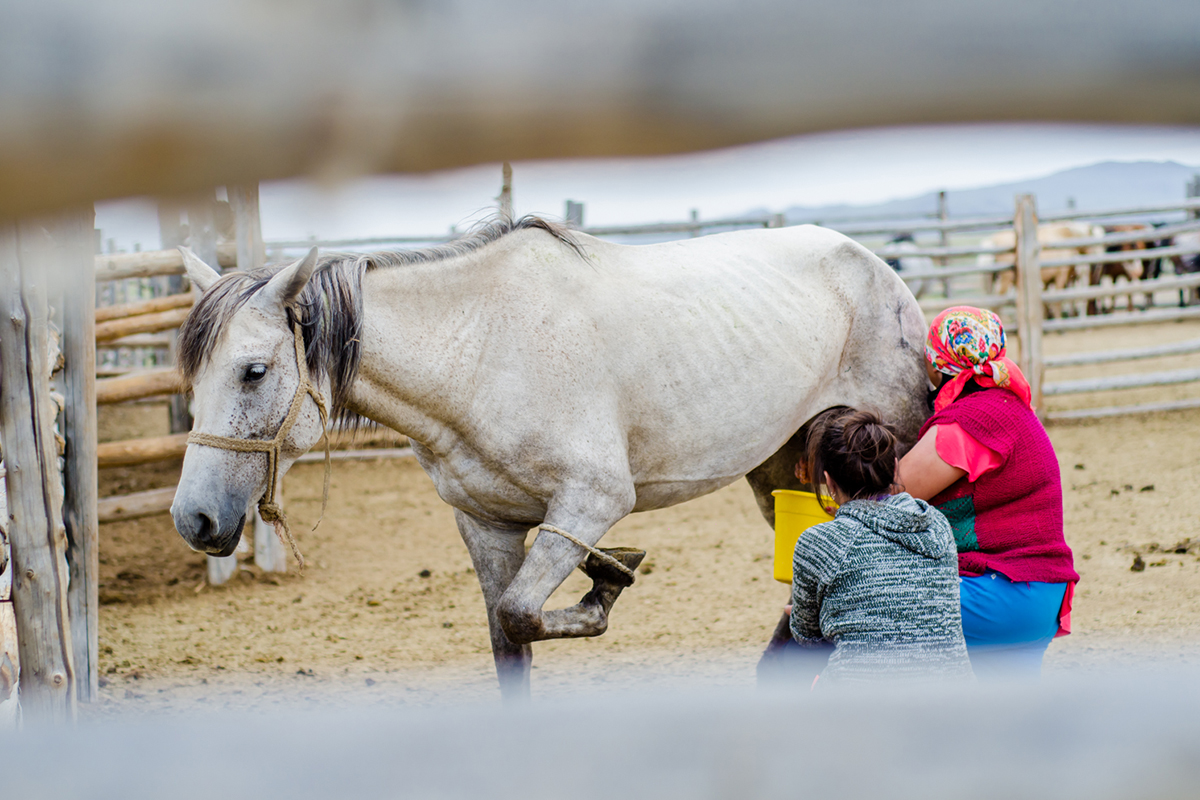 "Kumys?" Zhanlobat, the host, invites us to the table, according to a Kazakh custom. We drop our backpacks in a room full of empty kumys bottles and sit down at a round, low table. Aitolyk, the lady of the house, fills our plates with substantial chunks of mutton from the pot and potato halves, and serves baursaki, a local version of donuts, with rhubarb jam. The large family gathers at the table, with children, nieces, and nephews all together.

"After our collective farms were dissolved in the 1990s, I had some livestock left: A few sheep, horses, camels and sarlyks [the Kazakh name for yaks]," Zhanlobat begins his story about how he went into livestock breeding. "Then we decided to try making kumys. Today we make the only certified kumys in the region; tourists and locals alike often come to buy it." 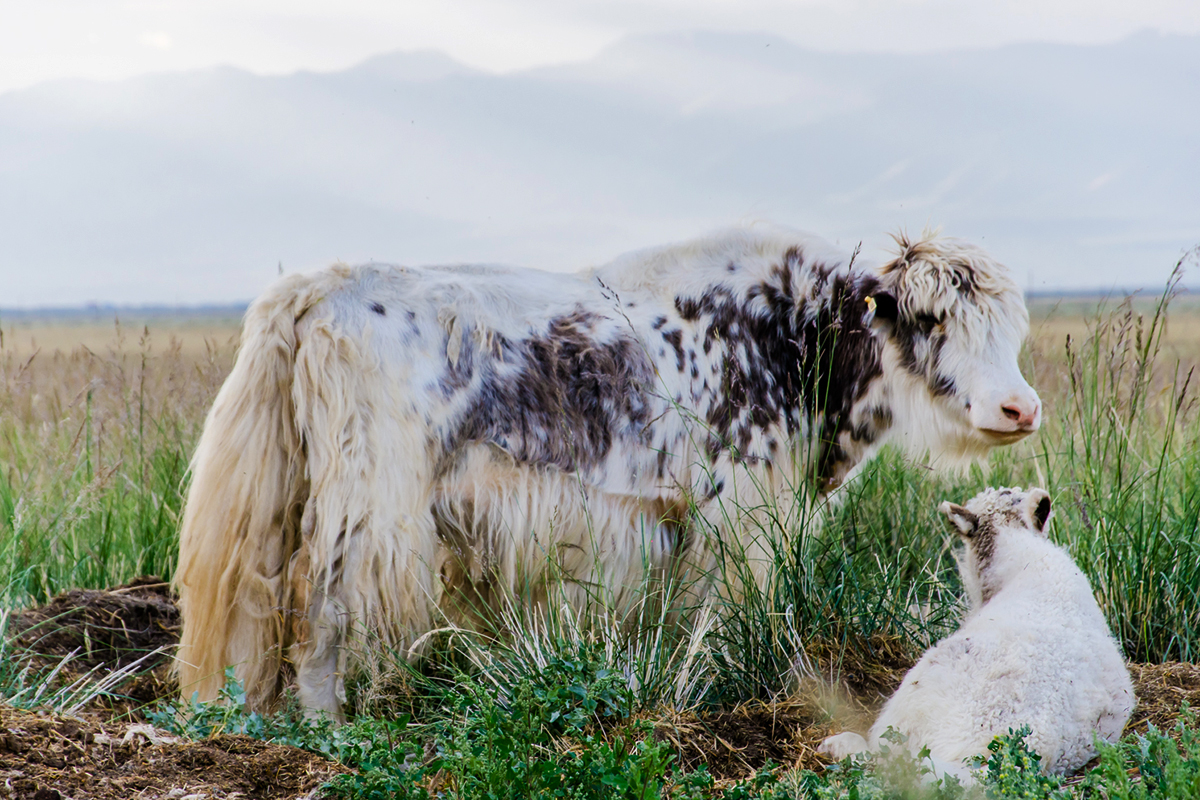 Zhanlobat pours some more kumys to his guests and to himself. Photographer Daba, a traveling Buddhist monk from the Transbaikal Region, refrains from it: The alcohol content of kumys is from one to three percent, and lamas do not drink any alcohol.  I drink it, but slowly, because it has a unusual taste.

After lunch, we follow Aitolyk, the lady of the house, her daughter, her sons and Bolat the wrangler to the horses' stables. The family milks the mares every two hours from eight in the morning till nightfall. One milking yields about 10 liters of warm, sweetish milk, which is poured into a special barrel, churned with a stick and left to ferment.

Zhanbolat did not exaggerate: Indeed, people come to the farm to buy some kumys every day. Among them, there is an elderly couple from Zhana-Aul, and some younger men who order kumys for a wedding – where, as we noticed, it is valued more highly than wine, cognac and vodka – as well as wholesale dealers who sell certified kumys in Gorno-Altaisk. 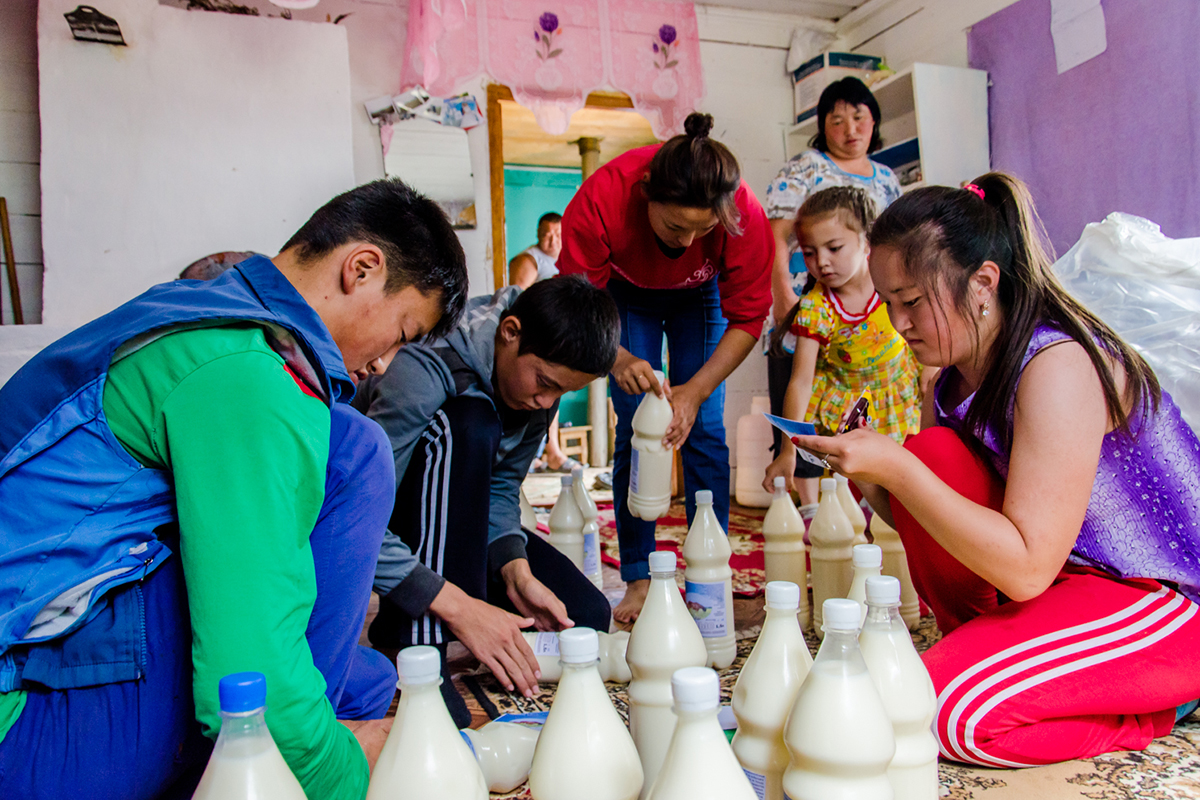 When the customers come, the entire household is set in motion. Aitolyk and her daughters pour kumys into bottles, and the room with its traditional Russian stove fills with sour-smelling fumes; the sons and the nephews stick tags on the bottles and label them with the packaging date, while Zhanbolat supervises the work and welcomes his guests at the round table.

After the guests leave, everything goes quiet. The horses are snorting gently in the stables, and the cows are slowly moving around the steppe like black dots. Zhanbolat lies down for a nap, Aitolyk starts baking a new batch of baursaks, and the youngsters grab their smartphones and start posting new photos on Instagram. 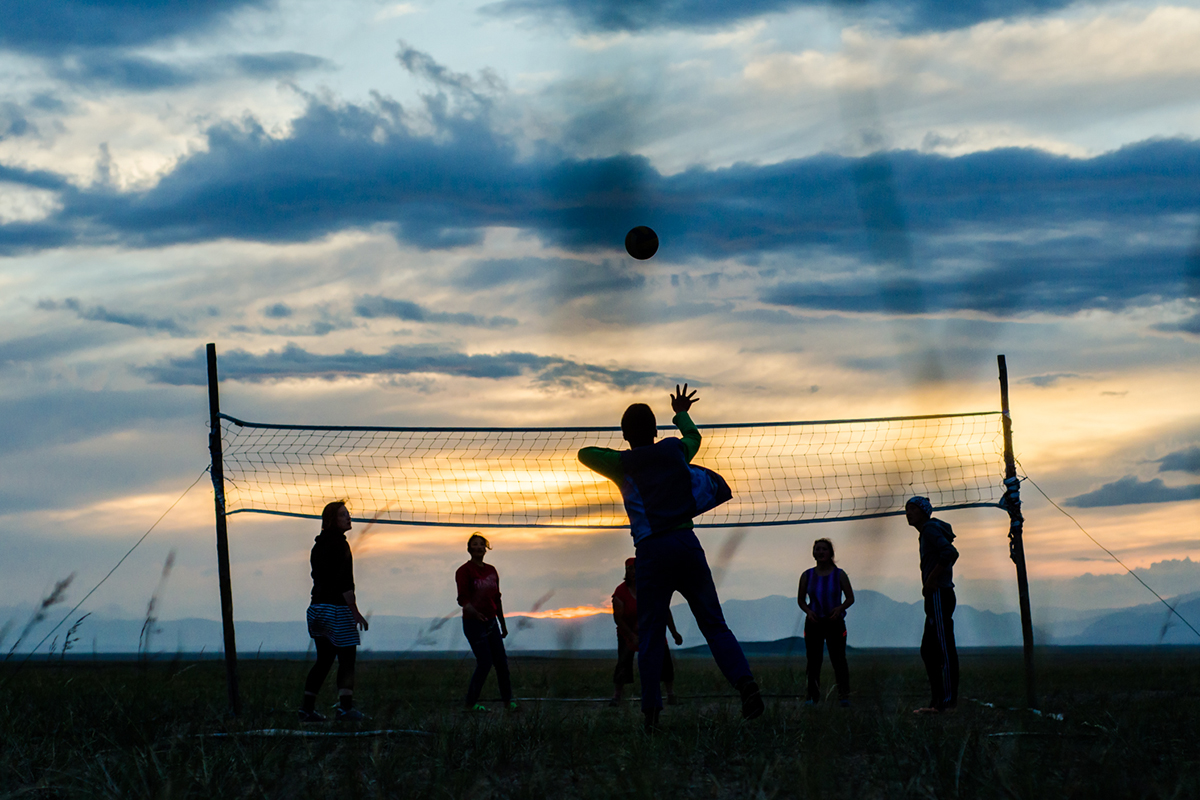 Only a lone camel, wandering near the house, breaks up this monotonous landscape. The Karanovs keep camels for meat, wool and "an exotic touch," but they pasture higher up in the mountains, looked after by other Kazakh families. However, this lone camel lives with the family: By chance, he grew up with the cows and considers himself to be a cow as well, so he can’t live with his "biological family." Unlike other "ships of the desert," he’s used to people: He never runs away and doesn’t snort or spit - and he allows people to pet him.

In the evening, before the sun vanishes below the horizon, the family comes out to play volleyball near the house. A botched serve sends the ball out of the field; in the first round, the male team is ahead of the female team, but in the second round, the women turn the tables after a good pass and some successful offense. A casual game full of laughter is a well-deserved reward at the end of a long "kumys day."