Conquering St.Petersburg in two days: The revolutionary atmosphere in 1917 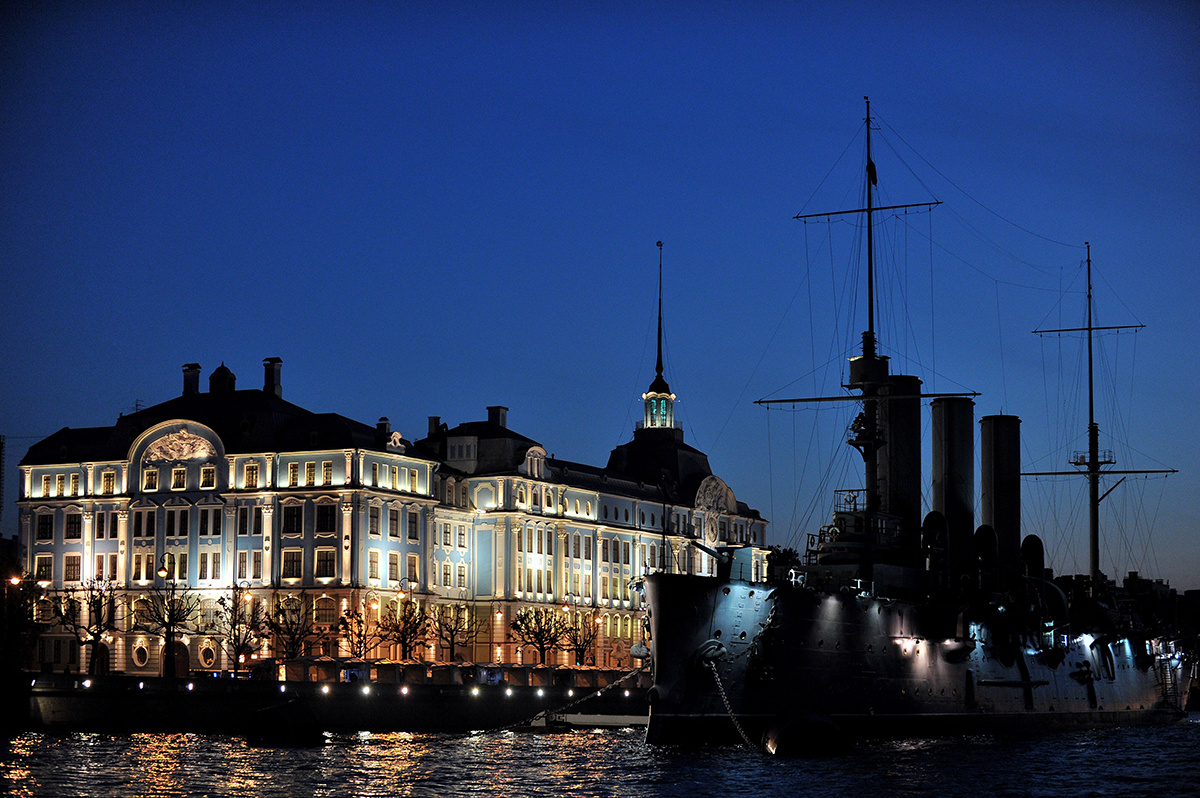 Getty Images
It did not take Lenin and his comrades more than two days in October to take down one country and establish another.

100 years ago, the Russian Empire gave way to Soviet Russia, a state which was hastily invented by the people who called themselves "Bolsheviks." The epicenter of the events was St. Petersburg, renamed Petrograd in 1914, and the protagonist was Vladimir Lenin, who would soon become a legend for Soviet citizens, just like Che Guevara in Cuba.

What can you do in the cradle of the Russian revolution? We have six ideas for you.

1. Take a peek at Lenin's bedroom 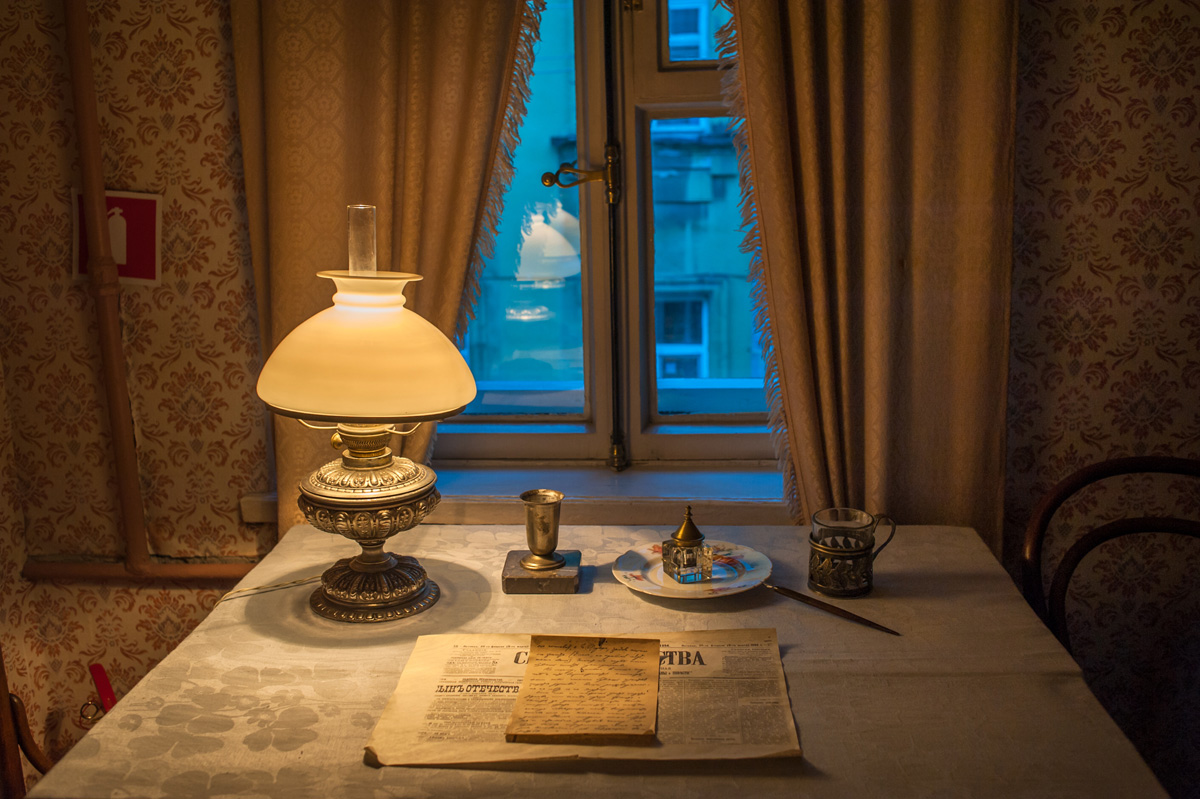 Apartment 13, which was rented out to 24-year-old Lenin in 1894-1895 and later turned into a museum, features a spartan interior: The only furniture is a narrow bed, a washbasin with a jug, and a table at which the future national leader would drink tea and eat brown bread while composing propaganda messages to workers in St. Petersburg factories, drawing inspiration from his dreams of a different Russia. This tiny bedroom saw the very beginning of the global revolution and the most audacious social experiment of the 20th century – the USSR. 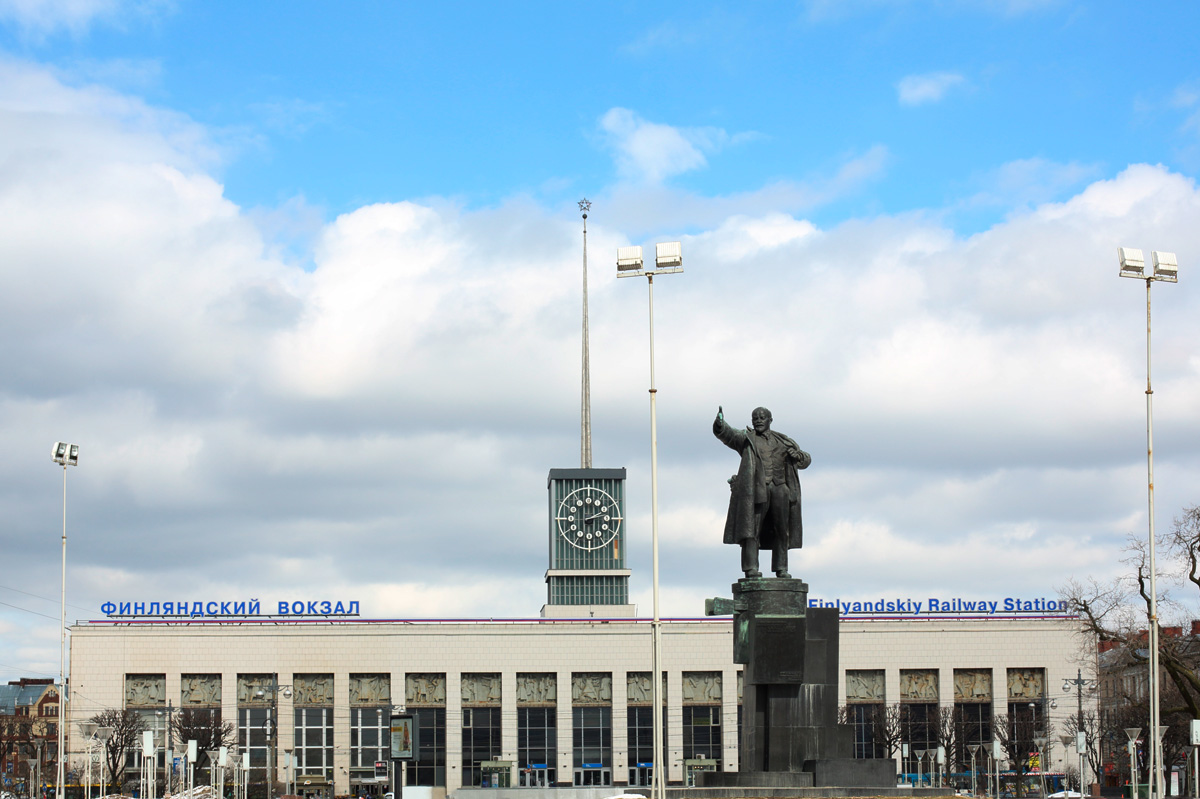 Lenin's path from writing in his bedroom to preparing an armed mutiny in 1917 stretched over 20 years, but we will need only 10 minutes and four subway stations.

Here we are, in Lenin Square in front of Finlyandsky Railway Station. On your way here, stop by the Ploshchad' Vosstaniya subway station to study the bronze-relief comic strip about the events of that revolutionary year.

As you exit the subway station, you will see a Lenin who is no longer a solitary dreamer: The artist painted the leader of the world's proletariat against the background of a pagan-looking solar disk and red flags, depicting the triumphant moment of Lenin's return from Finland, where he had fled to avoid being arrested and remained until 1917. "Lenin's" steam engine can still be found on the platform; it is a monument now, an American engine, built in 1900, which made its way to the very highest tier of Soviet mythology.

The square outside the station features a monument that depicts Lenin giving a speech.  This monument became the model for similar statues all across the USSR. It is easy to imagine him giving urgent instructions on taking control of St. Petersburg, just after he got off the steam engine: "Immediately and at all costs take the telephone office, the telegraph, railway stations and bridges! The success of the Russian and the global revolution depends on two or three days of fighting!" 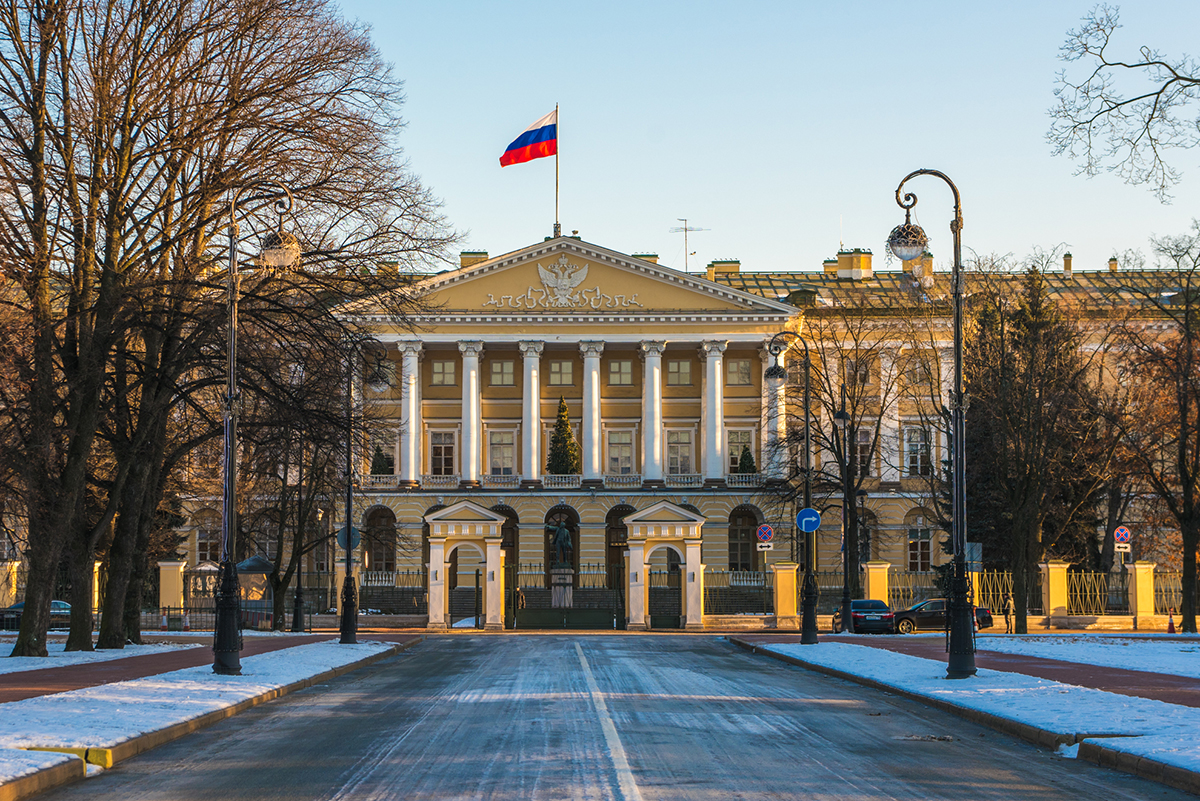 Imagine yourself in the shoes of the country's chief revolutionary, who has discovered that the odds of victory have never been higher. You need to act quickly, while your comrades are hesitant, speaking about security and insisting that you stay at the safe house.

The Provisional Government – the official executive authority of the Empire prior to the October Revolution – has put you on their wanted list. To add insult to injury, your "secret" plan for the uprising has recently been published by a wide-circulation city newspaper, after being leaked to the press by your political opponents.

This is how the evening of October 24, 1917, finds Lenin, as he walks from Finlyandsky Railway Station to Smolny Institute, despite the risk of being arrested. By 1917, the building of the former Institute for Noble Maidens has already been occupied by revolution-minded men, who use the facility as the quarters of the alternative city administration – the Soviet of Workers' and Soldiers' Deputies. De facto, it is the headquarters of the revolution, the place where it is fleshed out in the form of decrees and orders. It is from here that military units which have sided with the Bolsheviks receive their orders. It is Smolny where Lenin heads to command the beginning of the uprising.

Take a walk to Smolny late in the evening along Liteiny Bridge and the empty Shpalernaya Street. Picture bonfires burning and armed sailors and soldiers keeping watch. This is what the revolutionary headquarters looked like on the eve of those historic events. You can only visit the halls of Smolny with a guided tour, which it is best to book a month in advance.

After the abdication of Nicholas II, power was seized by "random" people. Although the members of the Provisional Government were backed by major Moscow manufacturers and St. Petersburg bankers, these politicians did not have a plan of action and were even weaker than the Emperor's government in the last years of his reign. It was a stand-in administration, necessary for the convocation of the All-Russian Constituent Assembly, which was to determine the future political landscape of Russia. But instead of preparing for the assembly, the Provisional Government was torn apart by having to choose between monarchists and leftist-socialist forces. As a result, by the fall of 1917, the government hardly enjoyed any support."  Vladimir Ivanov, the founder of Smart Walks, an agency of original tours around St. Petersburg

4. Signal the beginning of the uprising 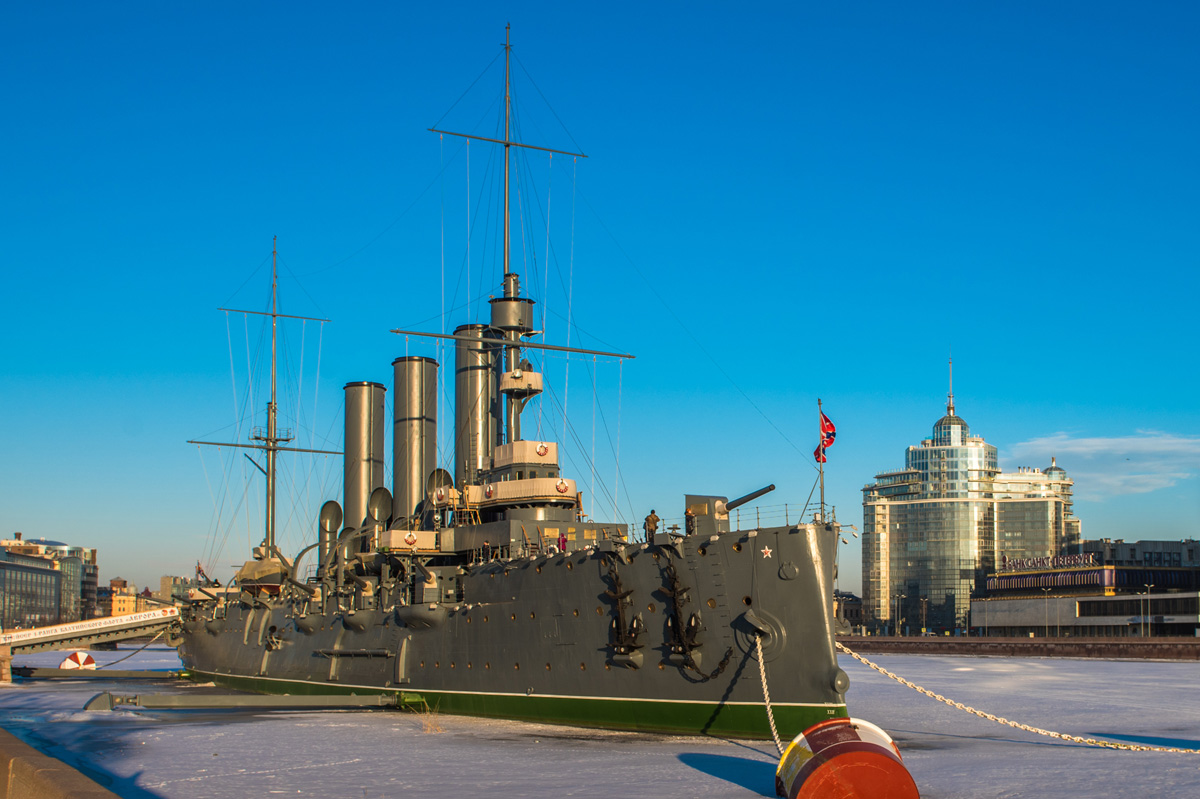 By October 25, Lenin's bidding has been done. The Bolsheviks' Committee is in control of all communications, including telephony, the telegraph, the mail and media publishing facilities, as well as transportation, having taken over all the railway terminals and bridges. The last figure on the chess board is the Provisional Government, awaiting their fate in the Winter Palace, the most significant edifice of imperial Russia, under the weak protection of junker troops.

The beginning of the storm resembles a well-directed action movie. The Aurora war cruiser – an intimidating sight even on its own – takes its position at the Blagoveshchensky Bridge. The Aurora fires a blank shot to signal the beginning of the mutiny. At the same instant, the cannons of Peter and Paul Fortress start the bombardment of the Winter Palace showrooms.

To hear the echo of the revolution today, schedule your visit to Aurora around noon. Since 1865, the city clocks in St. Petersburg have been checked against the midday blank shot from the howitzer in Peter and Paul Fortress. 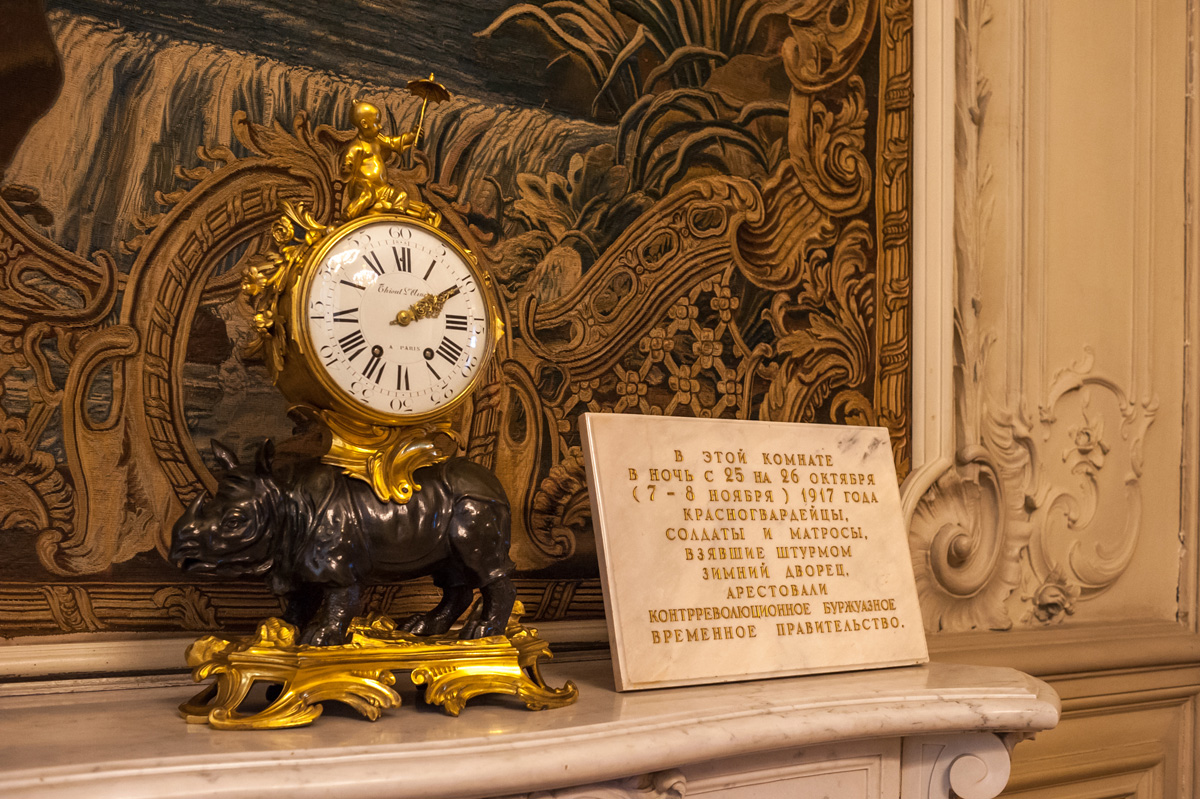 The most iconic depiction of how the Bolsheviks stormed the Winter Palace is the scene from Sergei Eisenstein's movie October (1927): A horde of sailors dashing across the empty Palace Square toward the Tsar's residence, black figures climbing the whimsical lattice gates and surging up the grand Jordan staircase like a single unstoppable wave.

The storming of the Winter Palace

"In fact, the storming of the Winter Palace had more semblance to a modern anti-terrorist operation. In the dark of night, groups of sailors and soldiers crawled across the Palace Square. The palace windows make perfect gun ports. The revolutionaries were not willing to risk their lives in vain. No one attempted to storm the front gate or the grand staircase. The showrooms of the palace hosted a makeshift military hospital. The usurpers knew that the government convened in the Empress' chambers, which could be accessed through Her Majesty's private stairs (the left entrance of the southern facade). It was this entrance that they used without any hindrance."Vladimir Ivanov, the founder of Smart Walks, an agency of original tours around St. Petersburg

Today there is one small detail to remind us of the storming of the palace, which makes it worth looking for the modest Smaller Dining Room in the never-ending maze of fancy halls. It was here that the remaining members of the Provisional Government gathered for the night of October 25 to 26. It was here that the Red Army soldiers surrounded and arrested them, proclaiming a change of regime in the country.

This moment is known up to the very minute: The rhino-shaped bronze clock on the mantelpiece was stopped and has shown the same time for many years. At 2:10 a.m., the Russian Empire became a thing of the past and a new era began.

6. Buy a piece of the revolution 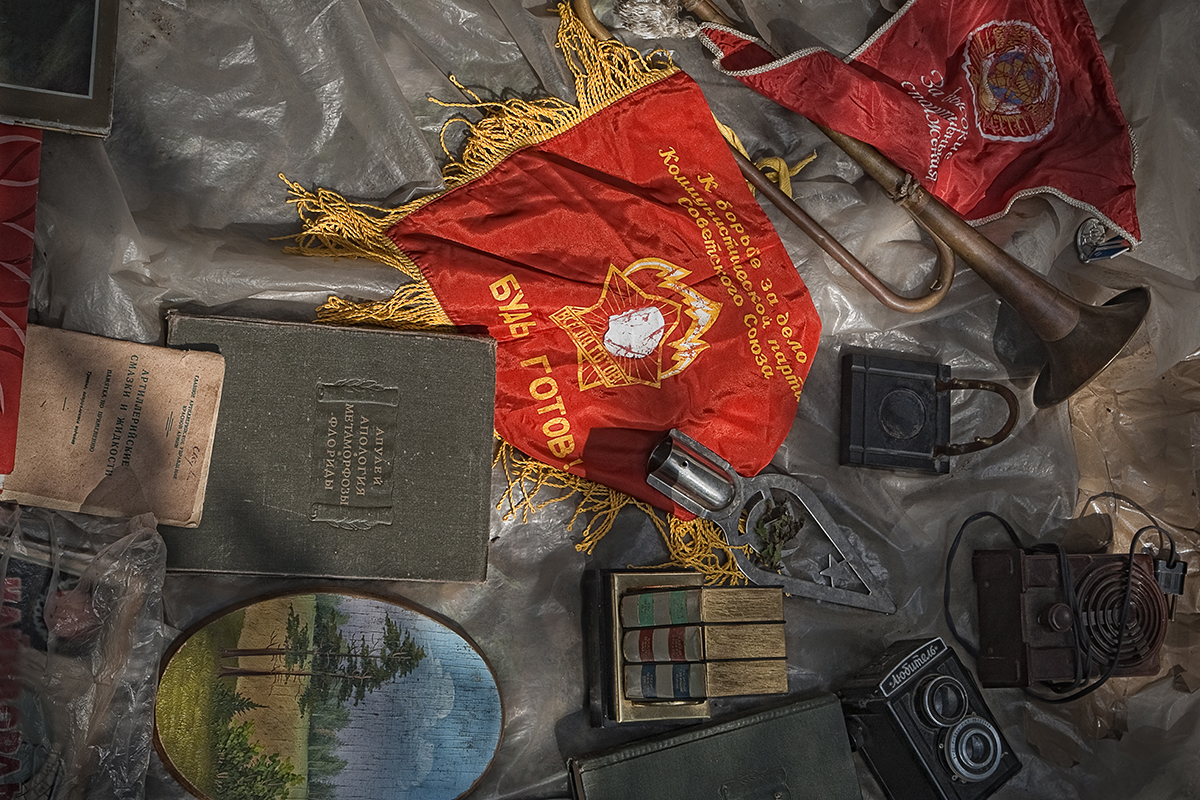 Relics of the Soviet era can be bought at the flea market in Udelny Prospect, not far from Vladimir Lenin's last safe house. If you are lucky, you might come across some fascinating artifacts, such as a board game called "Once Upon a Time in Petrograd," where the characters retrace Lenin's path to Smolny as a quest. Or a Christmas tree topper in the shape of the symbol of the revolution, a five-pointed star. Don't hesitate to bargain! Those who trade in legends tend to overprice them.