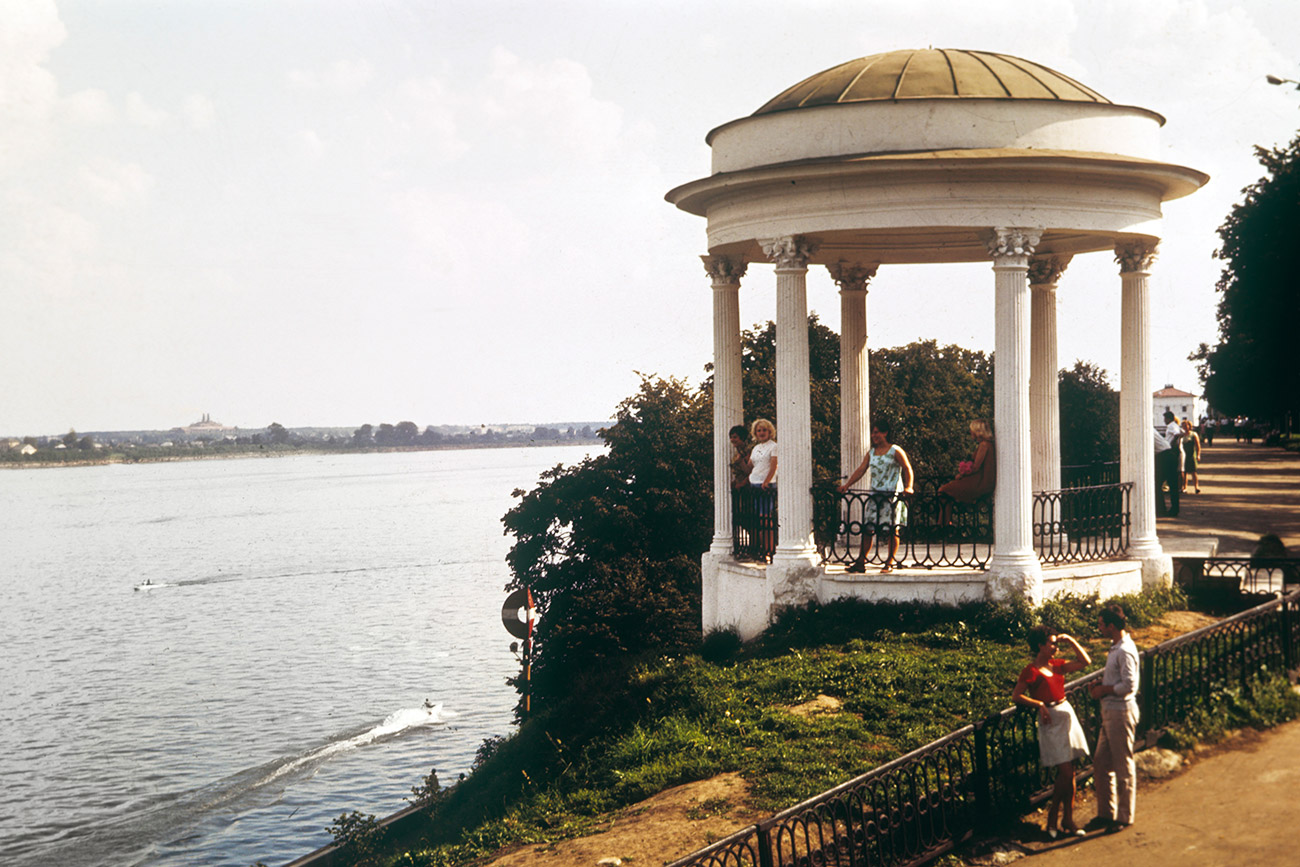 The embankment of the Volga river in Yaroslavl, 1973

RIA Novosti/I. Stin
A look at daily life in the most popular historic towns near Moscow

Did you know that Russia’s Golden ring tourist route celebrates only its 50th anniversary in 2017? But these ancient towns of northeastern Rus have plenty of good memories to celebrate!

The story of Russia’s most popular tourist route began in 1967 when Soviet journalist Yuri Bychkov came up with the idea of the ring route between ancient towns around Moscow. The newspaper, Sovetskaya kultura, published his series of essays under the general heading, ‘The Golden Ring.’ Later this name was given to the tourist route.

Actually, the route is not exactly ring-shaped and looks more like an abstract handful of dots, but the metaphor about a golden ring turned out to be very catchy, elegant and very Russian – no traveler today can imagine visiting the country without taking a look at this ‘jewel’.

Speaking of the towns in the official route, history buffs and culture lovers always find reasons for a hot dispute. Some think that only eight towns can be called the original Golden Ring:

The rest of the list – another 17 towns – is additional, check out the map to see them:

Others disagree and insist that Russia’s Golden Ring consists of 12 cities (we’ll save your time and won’t mention them all). Despite its age, the Golden Ring hasn’t frozen in time: new towns were added to the route in 2015 (Kasimov of the Ryazan region) and 2016 (Kaluga of the region with the same name).

The closest Golden Ring town to Moscow is Sergiyev Posad – just 42 miles to the northwest. These French tourists visited its main landmark, the Trinity Lavra of Saint Sergius, in 1966. At that time, Sergiyev Posad was called Zagorsk. The town got its original name back after the collapse of the Soviet Union. 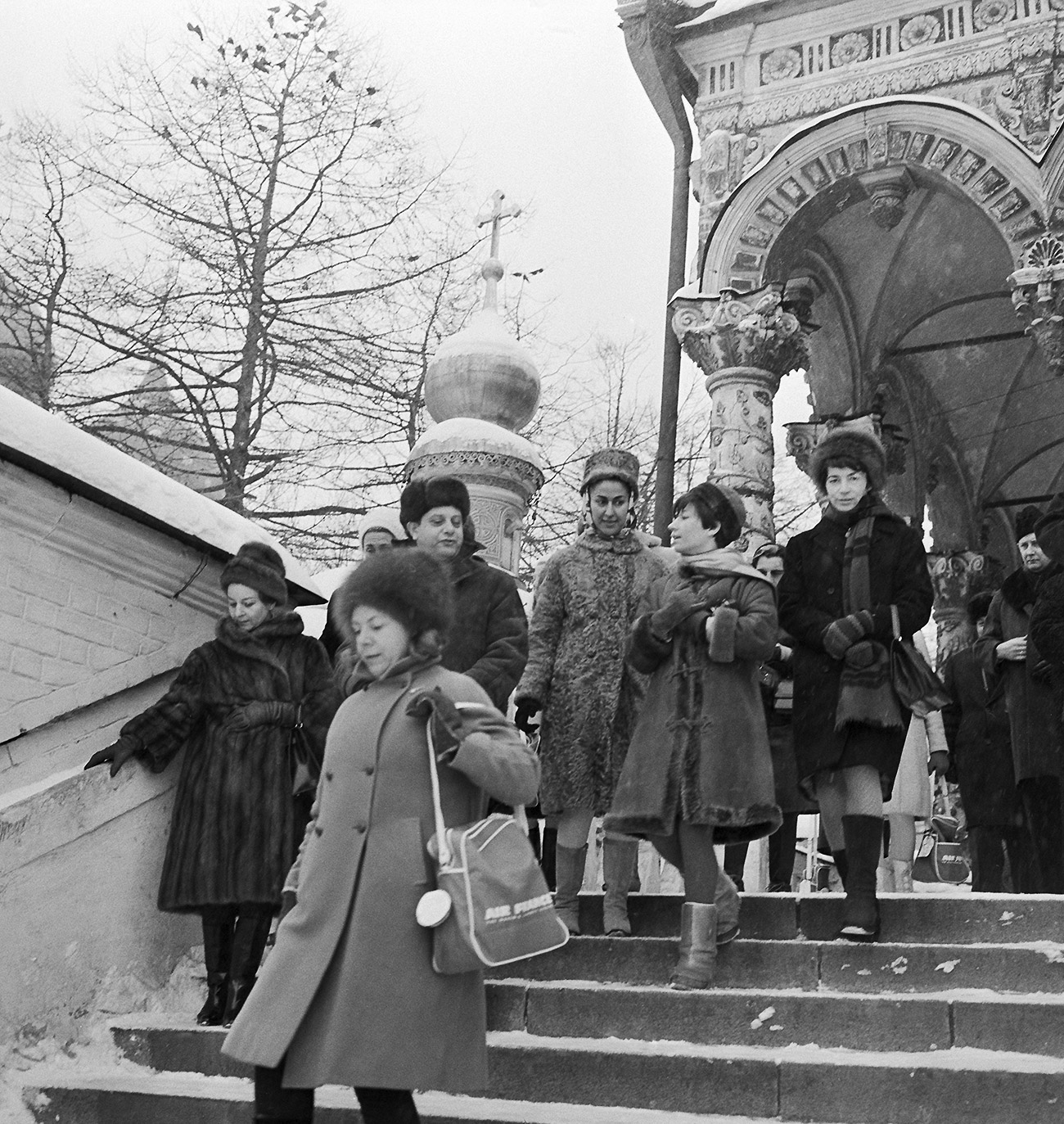 Prima ballerina Claire Mott and other performers of the troupe of the Grand Opera Paris visited the Trinity Lavra in 1970. 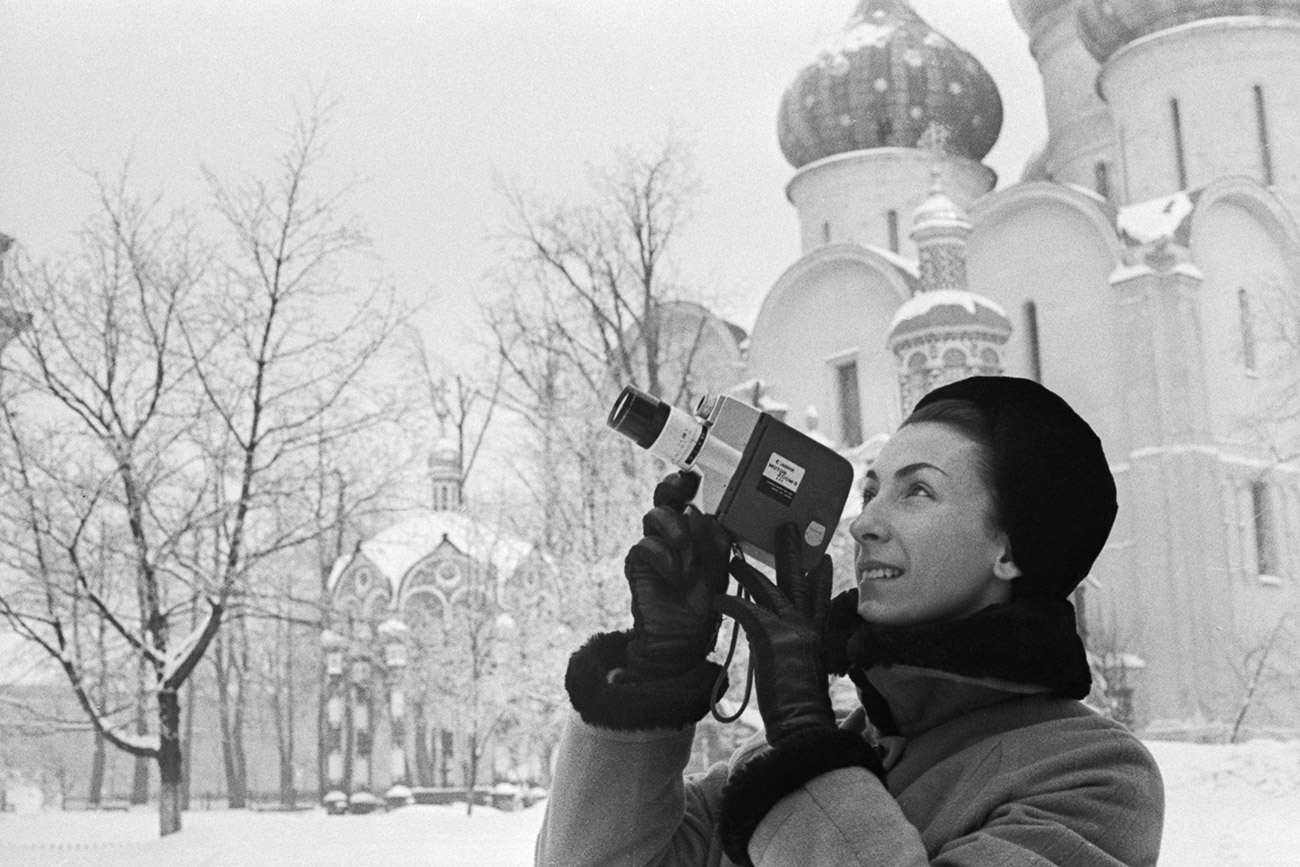 Children take open-air painting classes in a summer camp in Pereslavl-Zalessky (1988). The town is Moscow’s younger brother, and was established by Prince Yury Dolgoruky, the founder of Moscow, in 1152, just 5 years after the future capital of Russia. 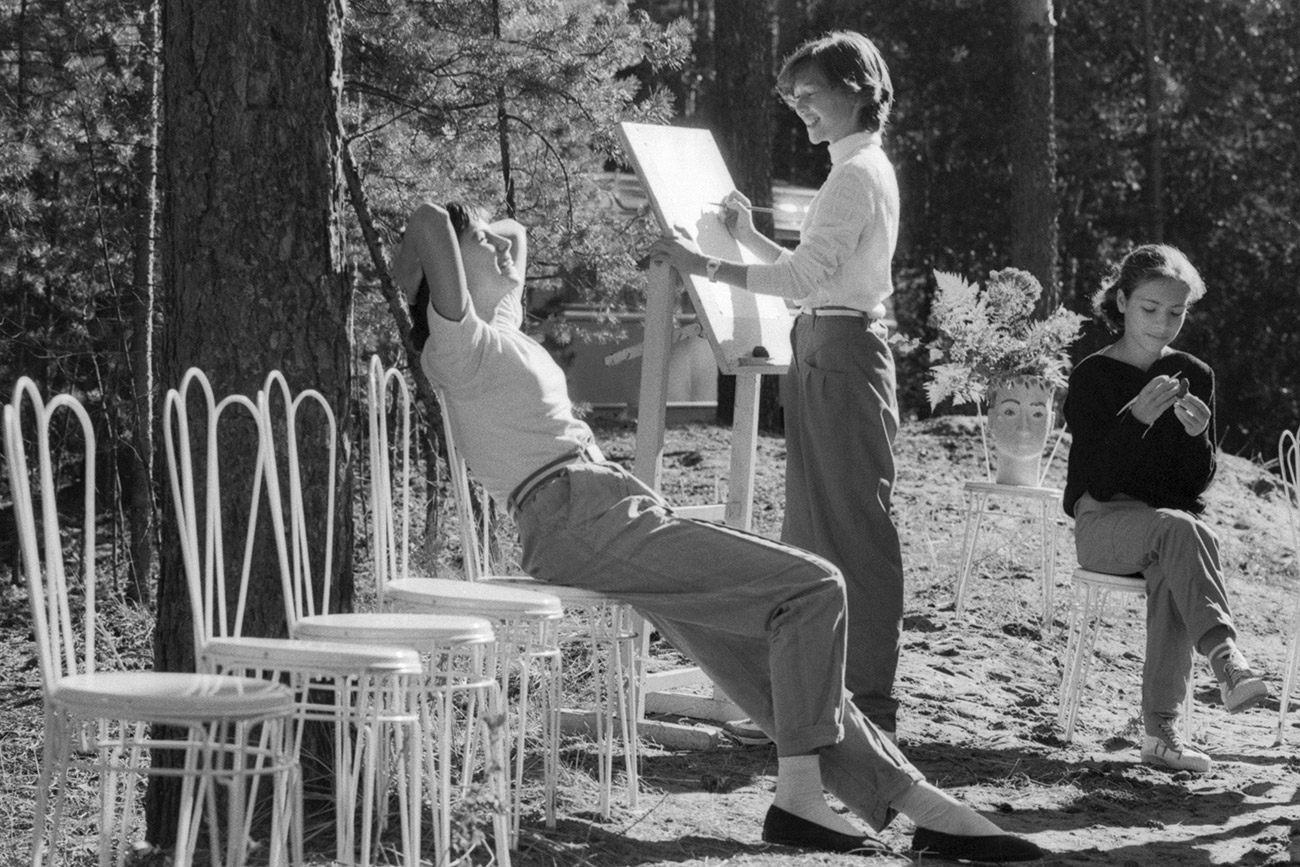 Academician Sergey Zagraevsky notes that building Pereslavl-Zalessky on this bare marshy ground in the 12th century was so expensive and massive that it is quite comparable to Peter the Great’s founding of St. Petersburg in the beginning of the 18th century. It is symbolic that Peter built his first fleet on Lake Pleshcheevo in Pereslavl-Zalessky. 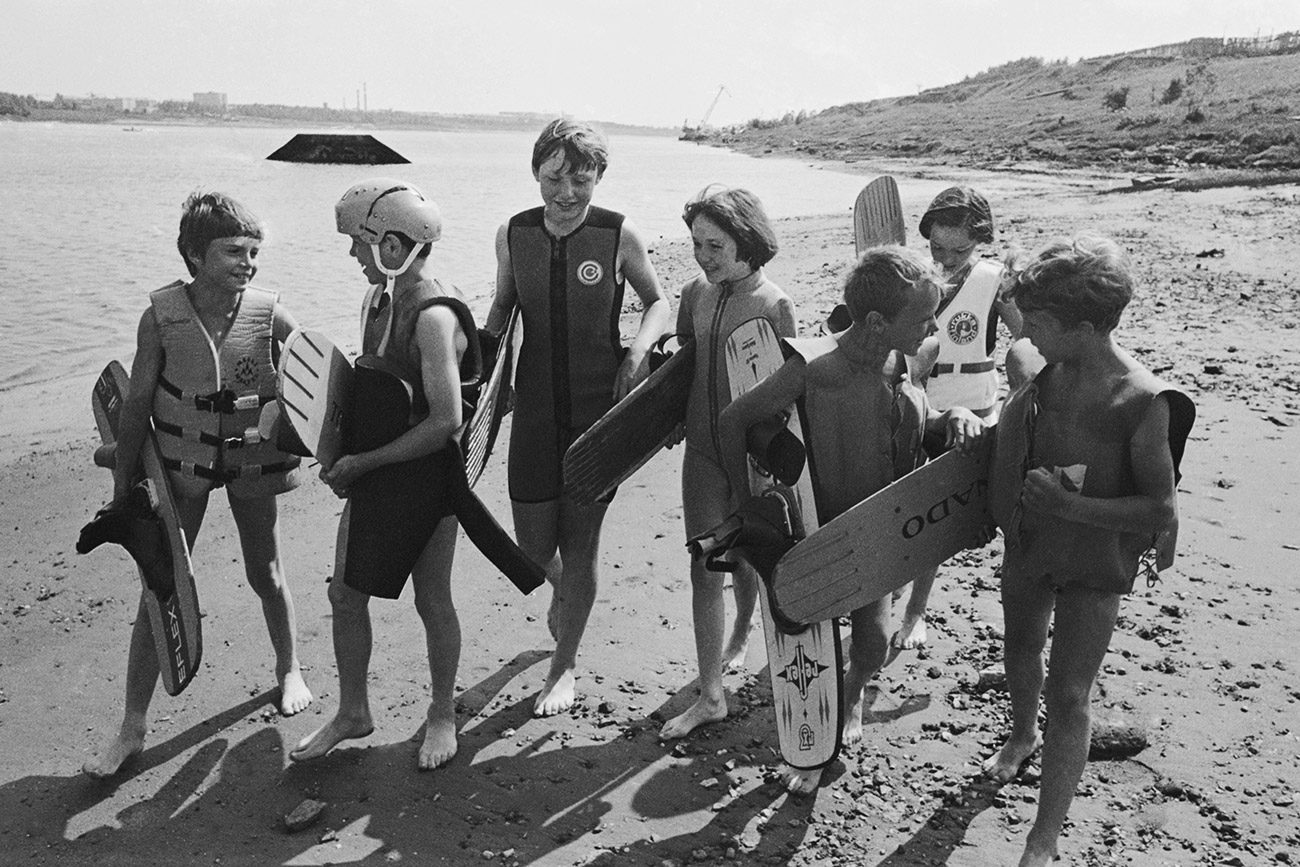 Young jet-ski fans in the town of Rybinsk (1979). It is located 48 miles from Yaroslavl, the largest Golden Ring town. And yes, you can go jet-skiing just like these kids. The town is located on the banks of the Volga river and the Rybinsk reservoir. 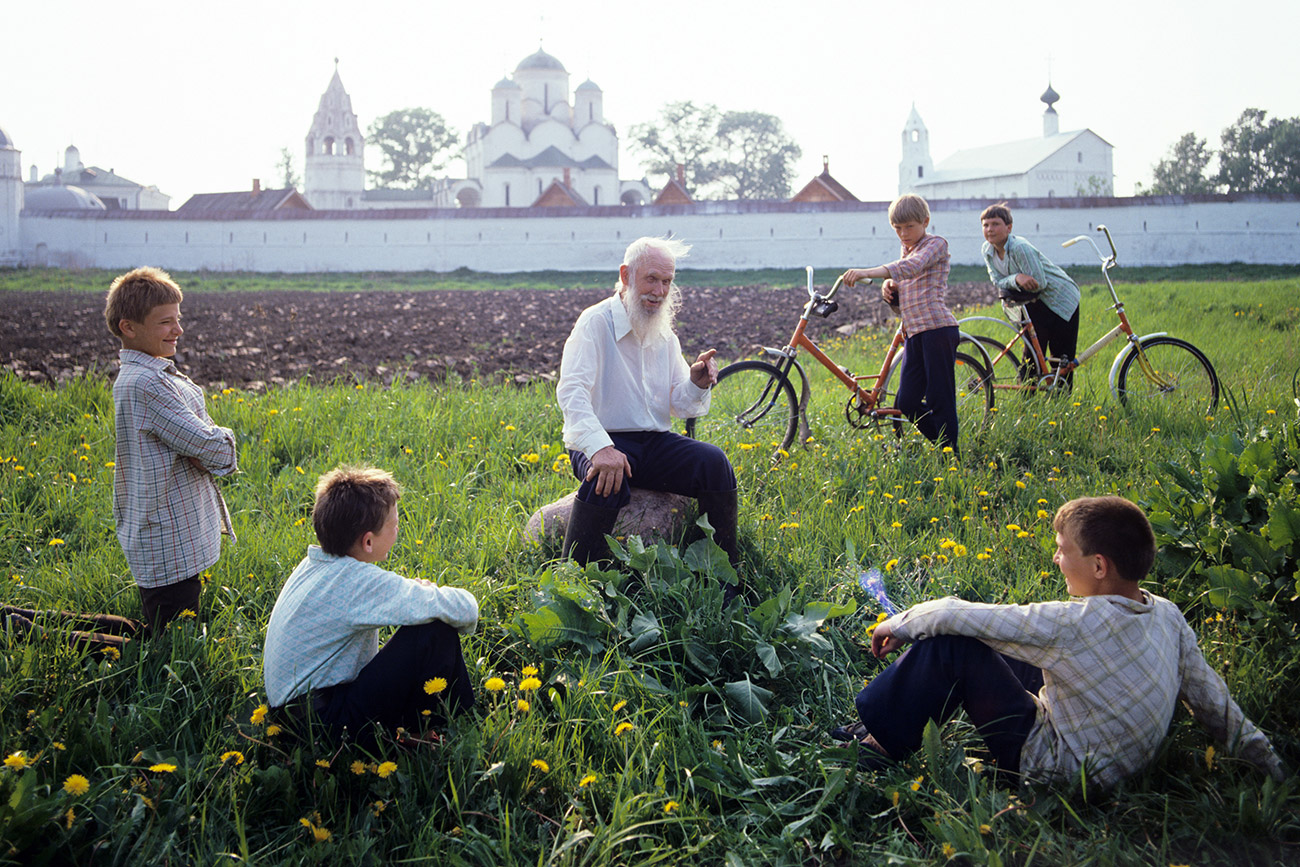 Of course, no, it’s not Tolstoy. Actually this is Suzdal’s oldest citizen, Eugene Gorbunov, in front of the town’s kremlin (1983). Suzdal is among the oldest Golden Ring towns, first chronicled in 999. The Nativity Church and small white kremlin in Suzdal’s center are almost 400 years older than Moscow’s red walls. 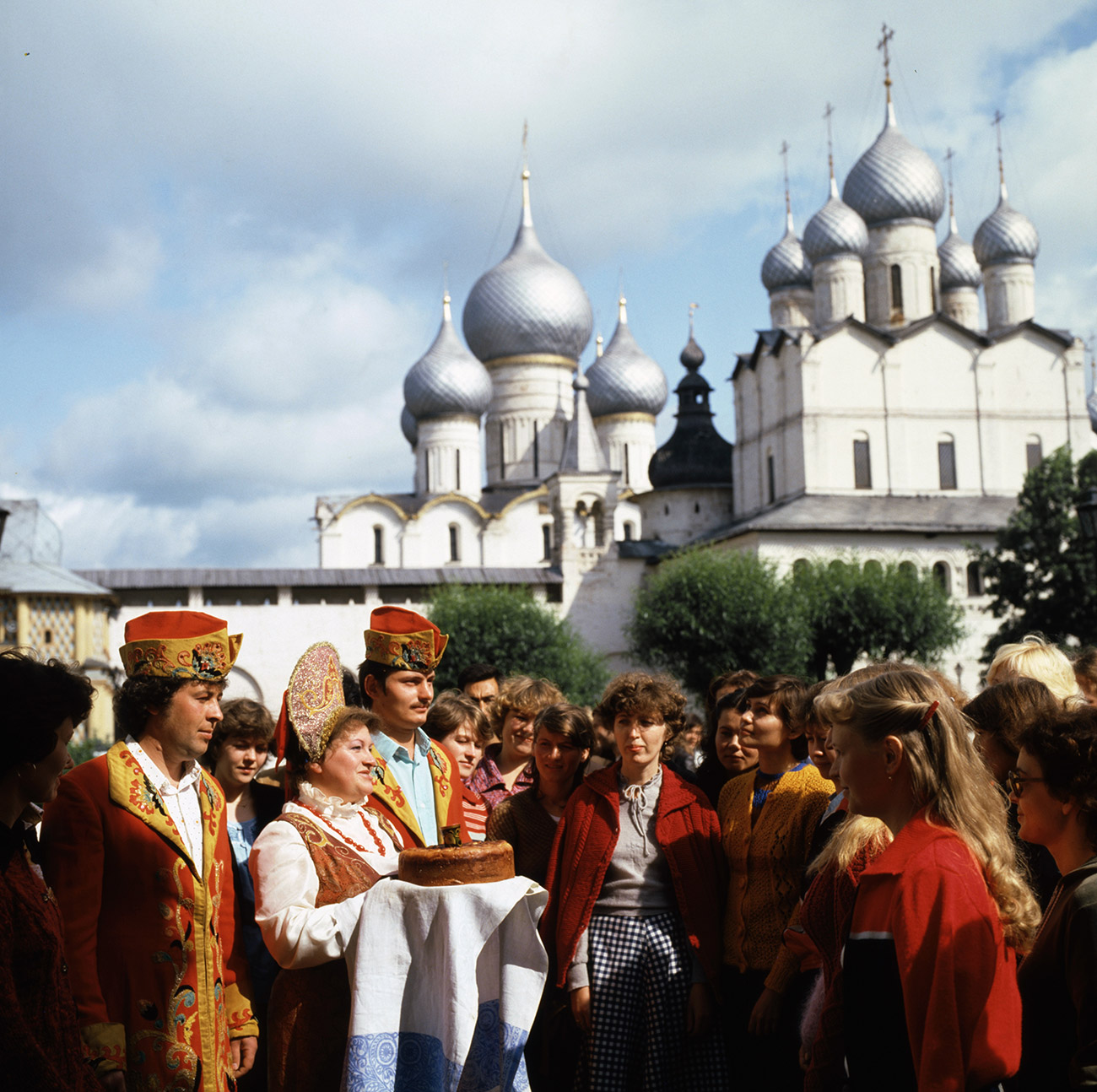 This is how you meet tourists Rostov-style – wear the best traditional costume and serve them special karavai bread (1983). This town’s kremlin survived hundreds of attacks since 862, and Rostov Veliky’s turbulent past have left plenty artifacts for culture and art lovers. 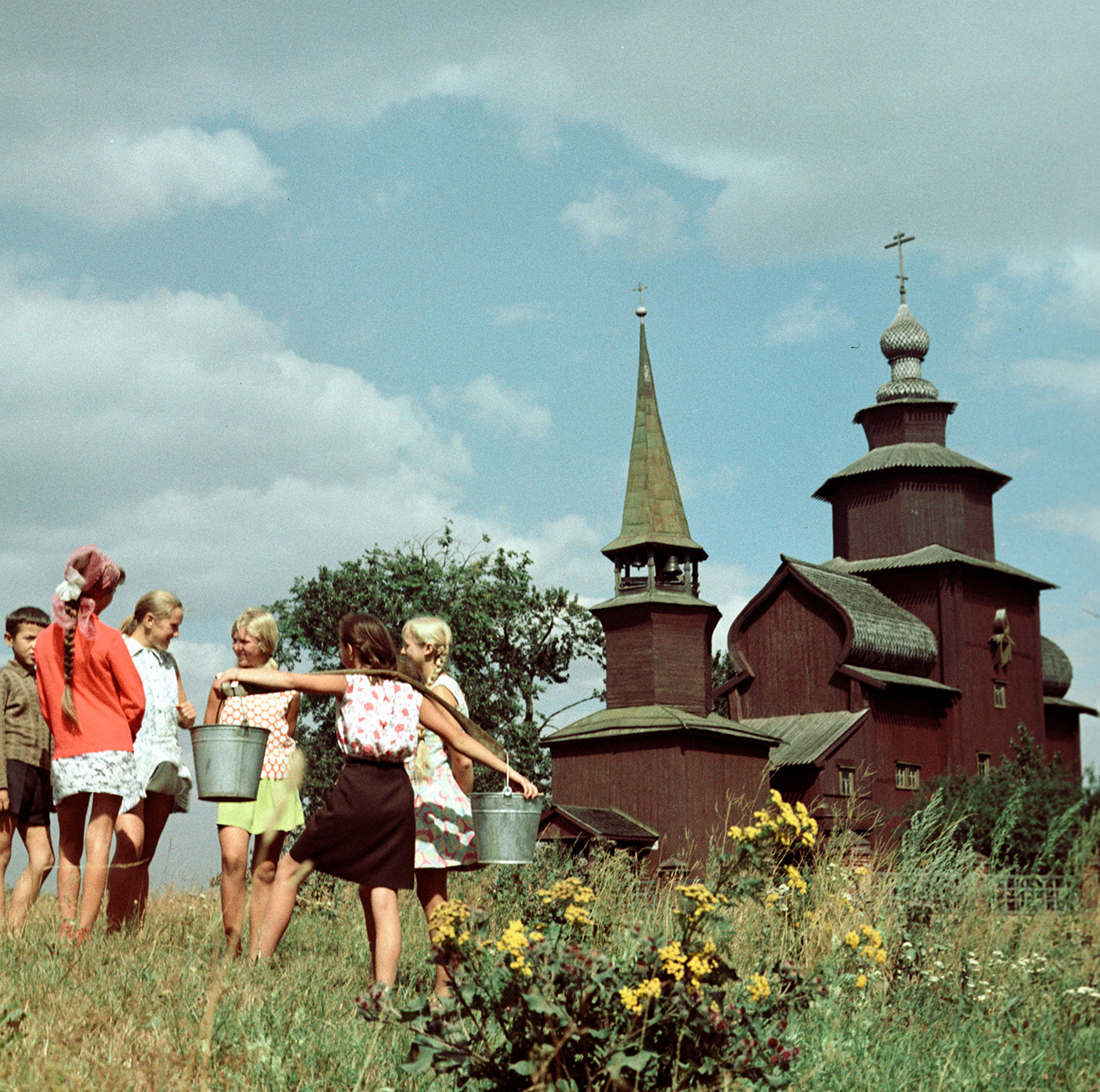 Despite its ‘Veliky’ (great) name, some places in Rostov could resemble a village with 30,000 residents, where you can collect water with buckets and shoulder-yokes, just like these kids near St. John’s Church (1972). And when tourists overrun the town, its population doubles. 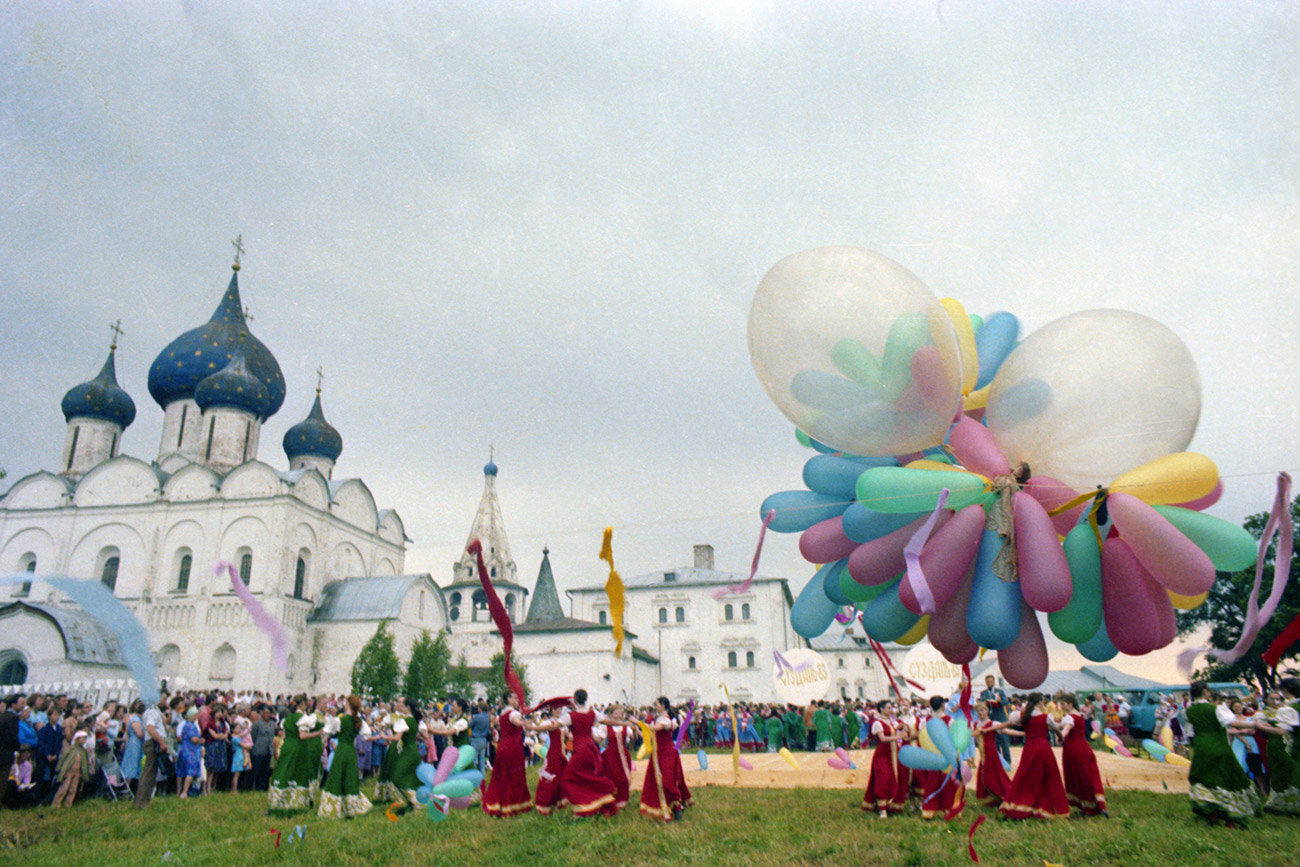 This is how a big day for Suzdal looked like. In 1982, the World Federation of Travel Writers (FIJET) awarded the Golden Ring town with a golden apple, the prize for the best international tourist destination. Paris and Prague were also candidates for that prize, yet they lost to the tiny medieval town in the middle of the Vladimir Region. 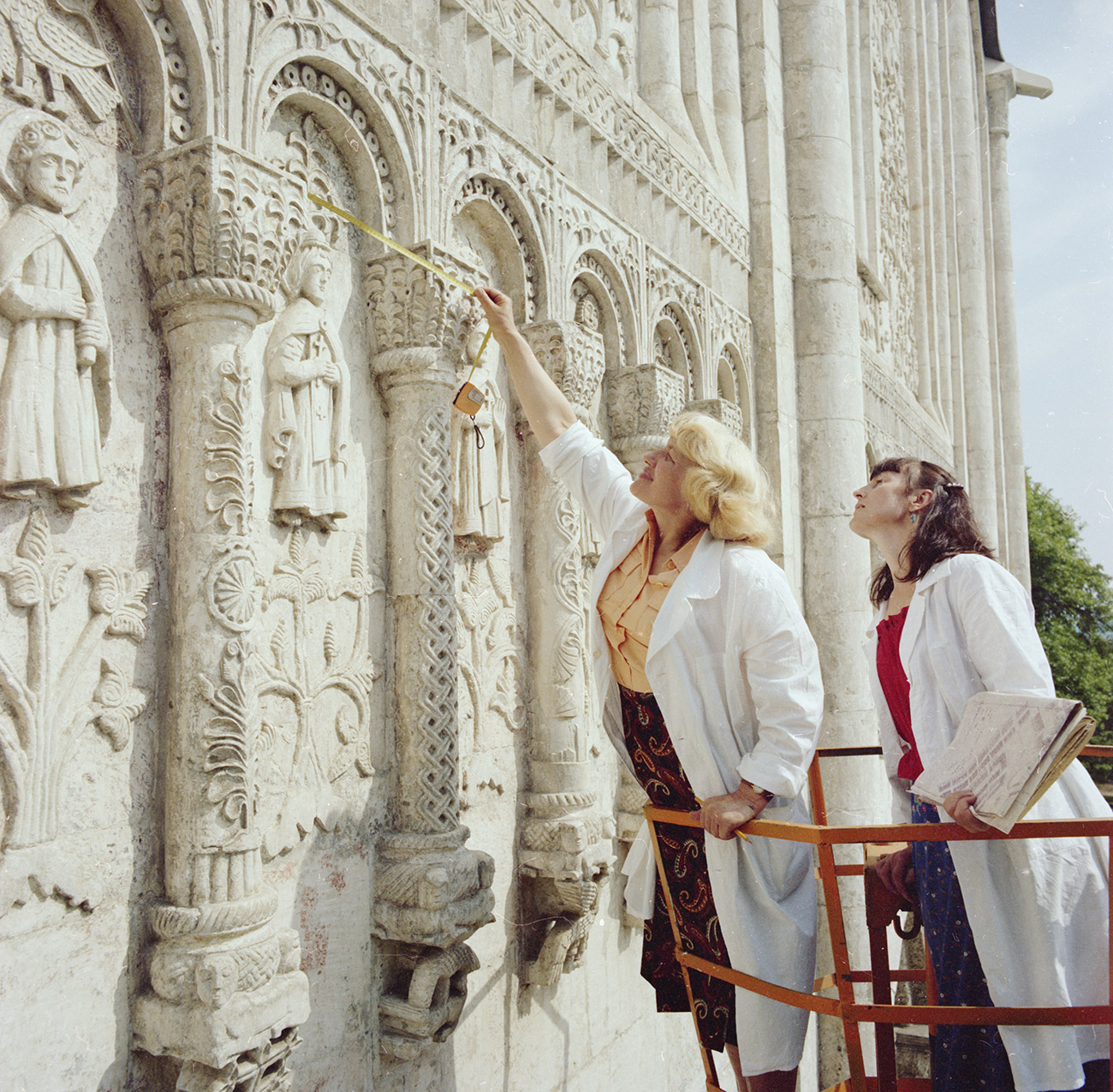 Architects Maria Subbotina and Magdalina Gladkaya inspect ornaments on the carved walls of the Cathedral of St. Dimitriy in the city of Vladimir (1983). This manmade creation from Vladimir’s golden age, St. Dimitriy’s Cathedral, is considered the city’s most beautiful building since the 12th century, and was placed on the UNESCO World Heritage list in 1992 for its white decorated walls and dramatic history – the cathedral survived numerous fires, sackings and a nasty ‘renovation’ in 1837 when the stair towers and galleries disappeared. 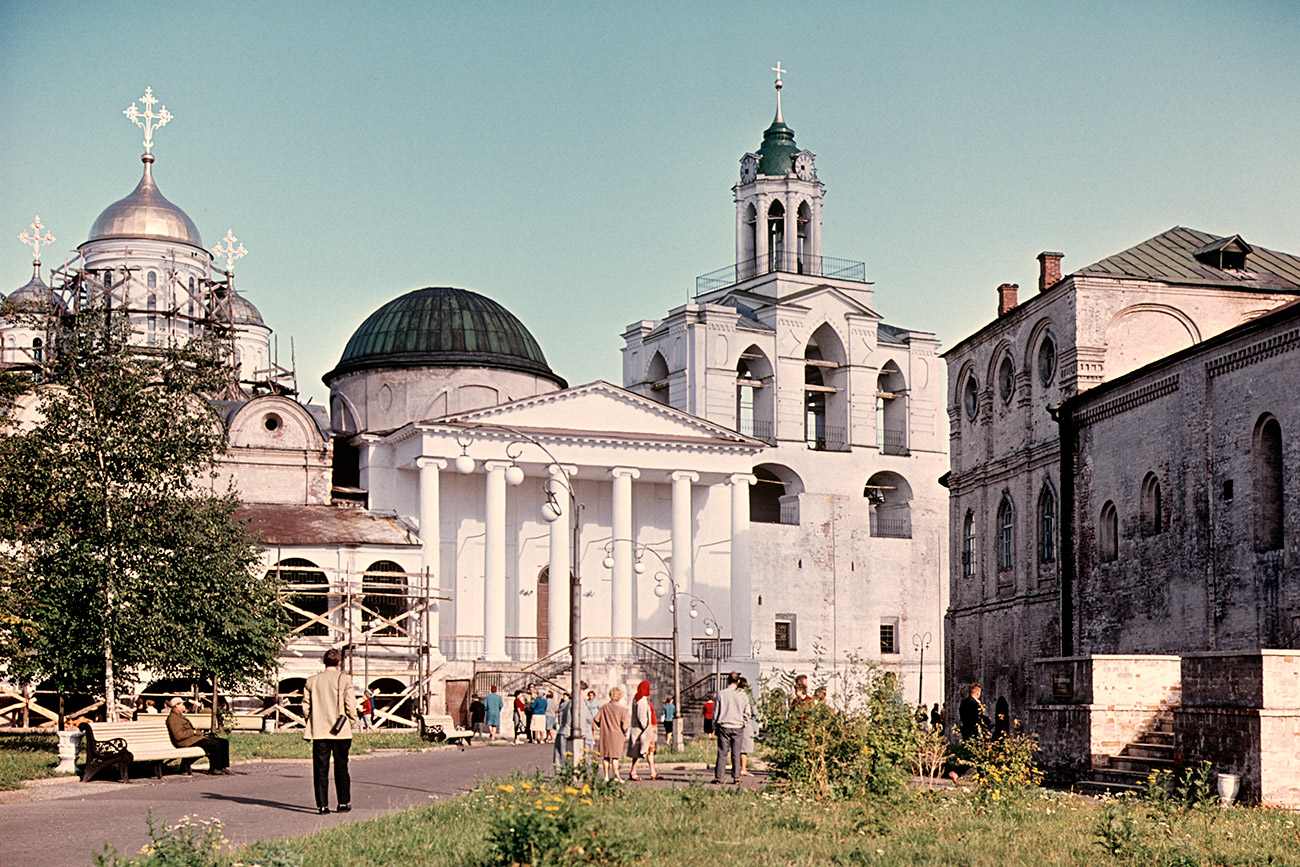 This is how the historical center of Yaroslavl looked in 1967. Renovation of the Transfiguration monastery in Yaroslavl State Historical and Architectural Museum Preserve was in progress. 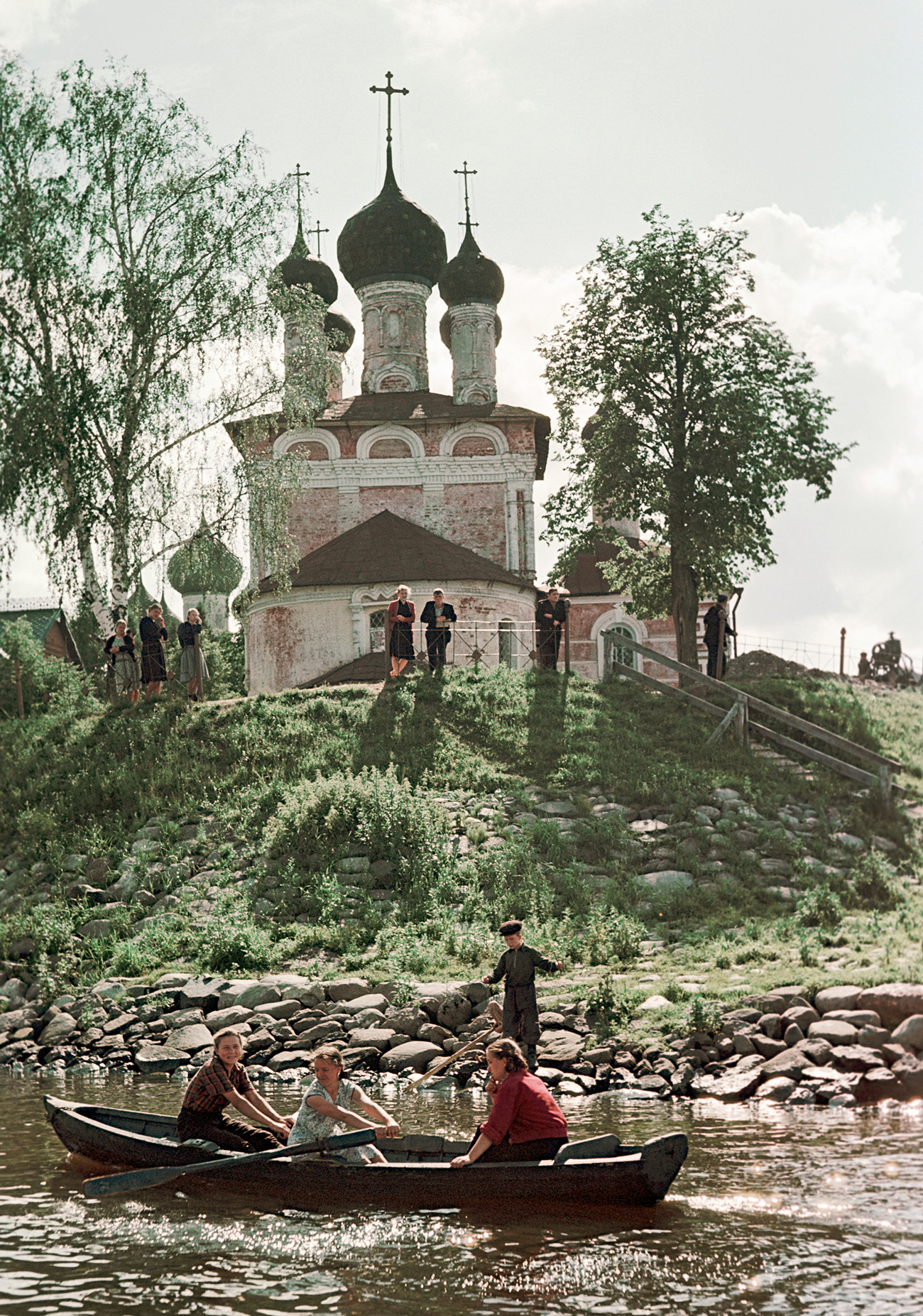 The serene Saints Boris and Gleb Monastery in the town of Uglich on the Volga river almost hasn’t changed since the 17th century (1957). Uglich became famous in Russian history due to a terrible tragedy. After the mysterious death of 8-year-old Prince Dimitriy in his Uglich residence in 1591, the royal Rurik dynasty ceased to exist, and seven years later the Time of Troubles fell upon Russia. Self-appointed ‘prince Dimitiys’ appeared in different parts of the country, claiming to be the dead boy. 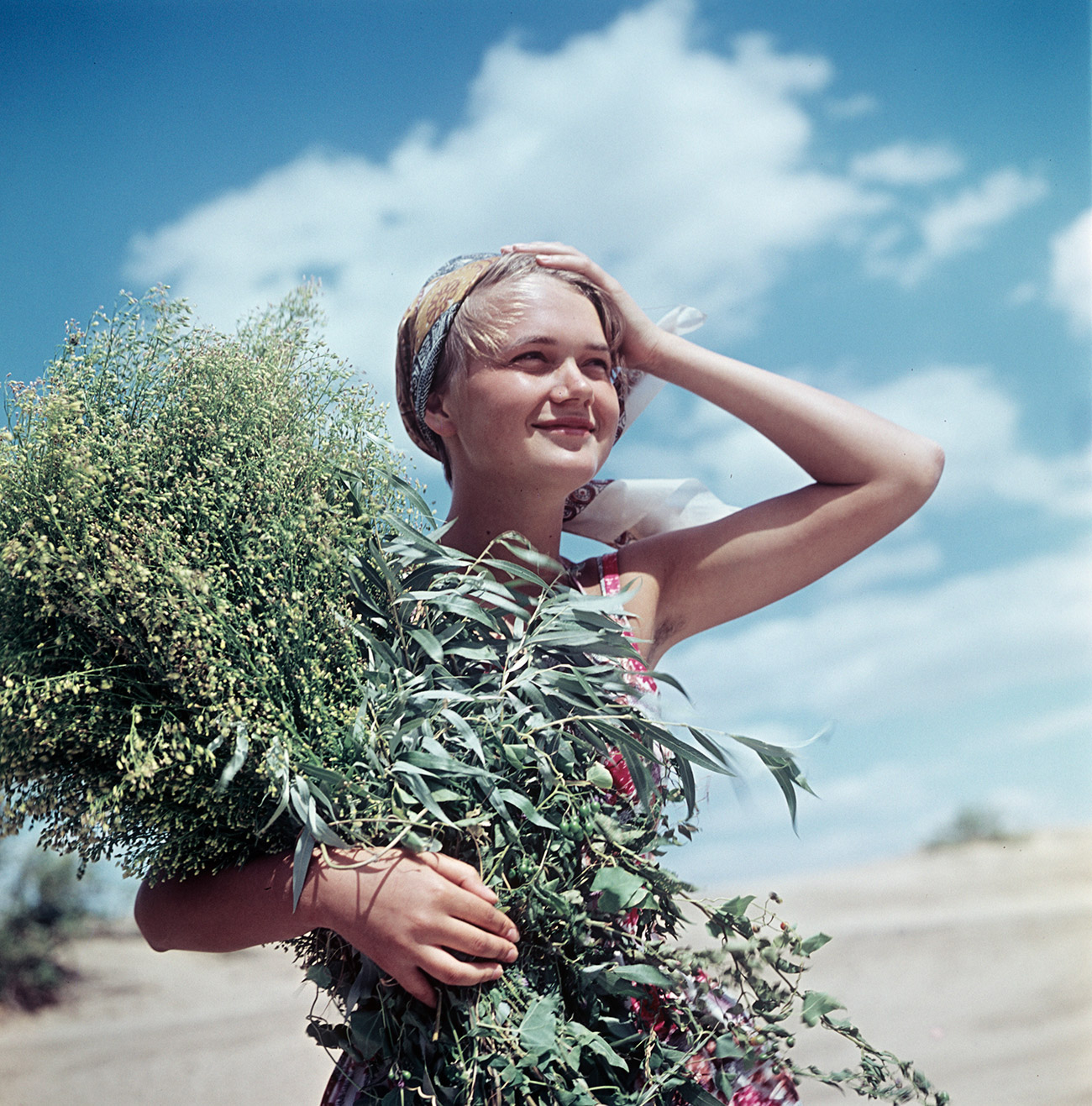 This is how you will look and feel after a trip to Russia’s Golden Ring – smiling and full of positive impressions (Portrait of a Yaroslavl girl, 1965).