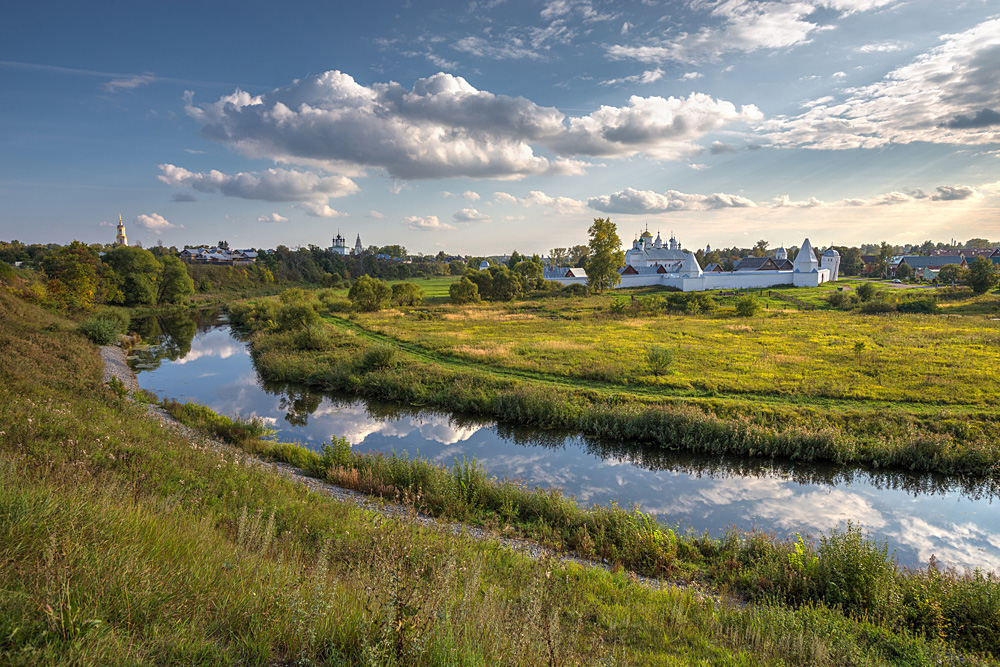 Lori/Legion-Media
Places you can't miss in your quest to discover the architectural treasures of ancient Russia, learn about its historical legacy, eat kalach bread and hear the sonorous chimes of church bells.

The 740-kilometer circle called Russia's Golden Ring comprises a fascinating landscape of Russian culture and history of the 12th–18th centuries, with its dramatic events, struggle for political and religious power and the decay of some of its cities coupled with the rise of others.

Events of previous centuries have left so many noteworthy sights surrounding Moscow that it takes more than one journey along the Golden Ring route to see them all. 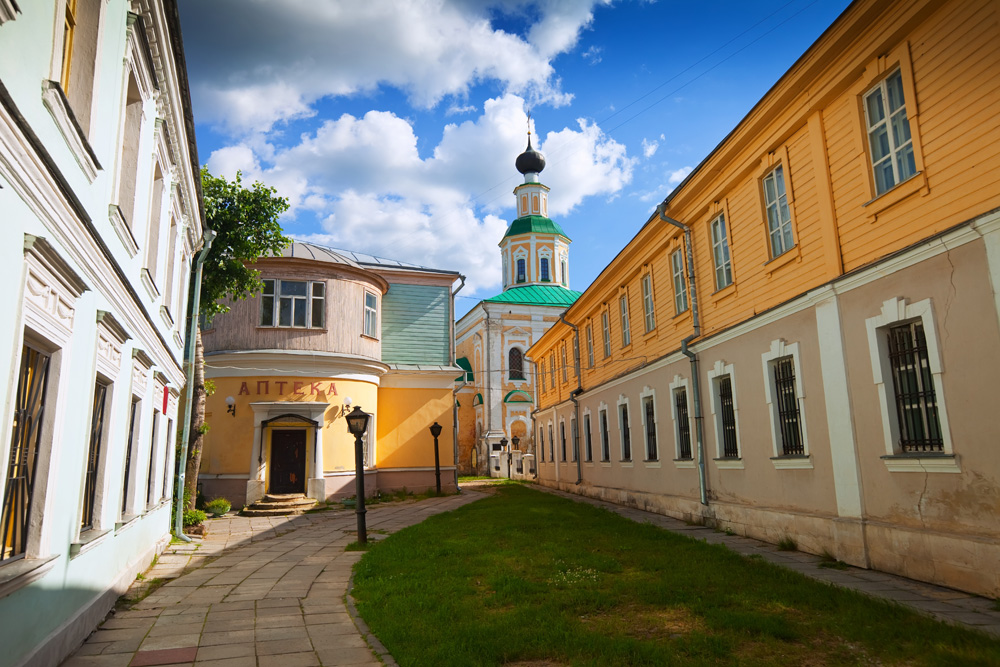 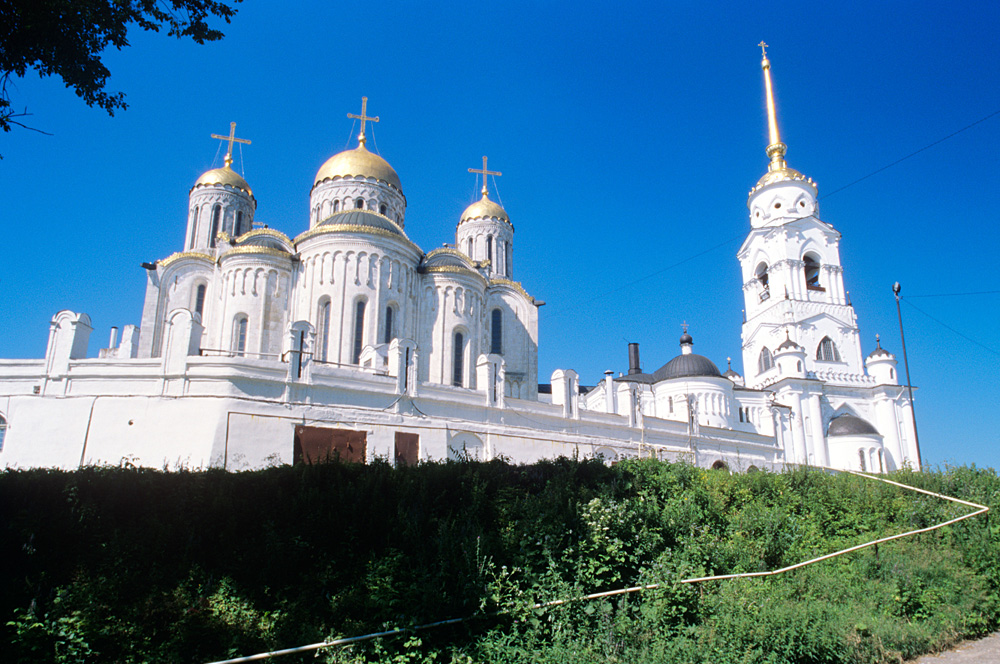 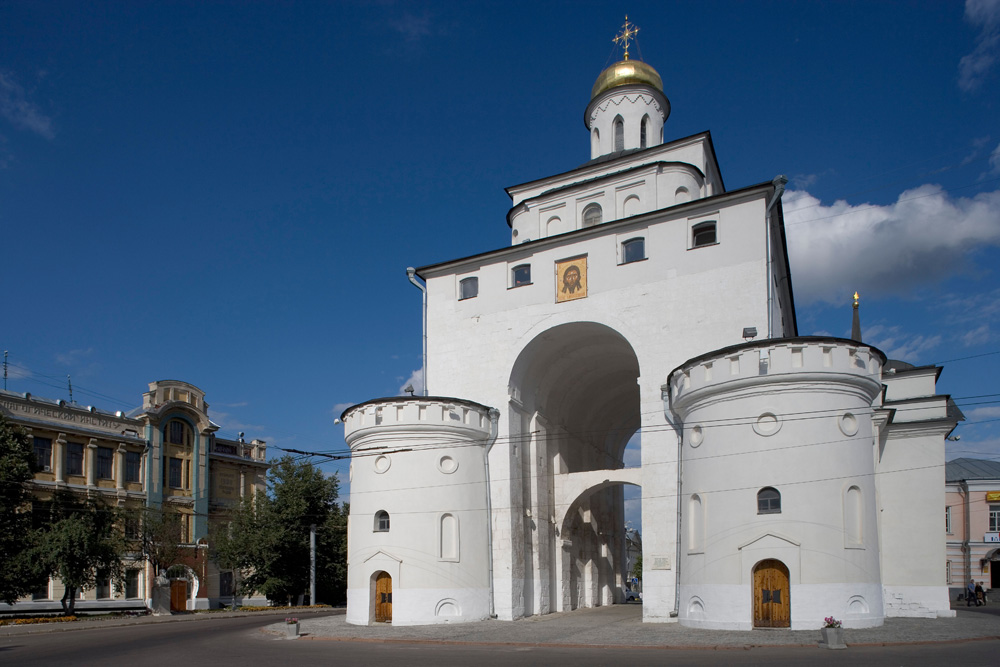 Alamy/Legion-MediaThe Golden Gate, crowned by a tiny church u2013 Vladimiru2019s symbol since 1164
1/3
A must-see for admirers of ancient Russian architecture, this town 190 kilometers (118 miles) from Moscow boasts the largest number of 12th-century white-stone landmarks, which have been included on the UNESCO World Heritage list. These include the stone-carved Cathedral of St. Demetrius, the Assumption Cathedral and the Golden Gate, crowned by a tiny church – Vladimir’s symbol since 1164.

Vladimir is not just a perfect destination for a weekend escape from Moscow, but also a great base camp for trips to neighboring towns and villages.

2. Church of the Intercession on the Nerl 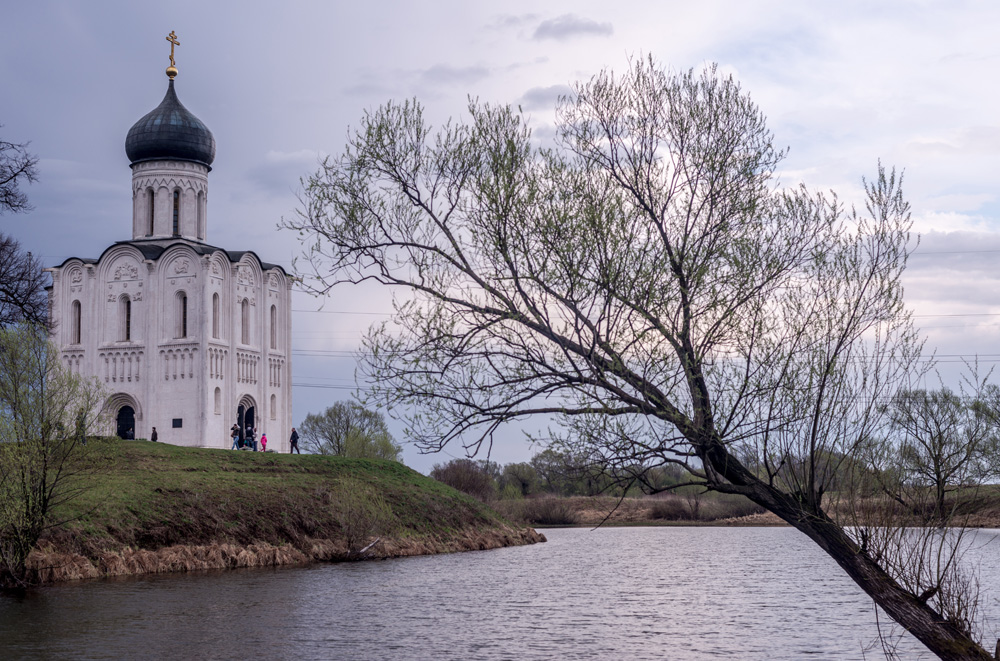 Elena LarionovaChurch of the Intercession on the Nerl 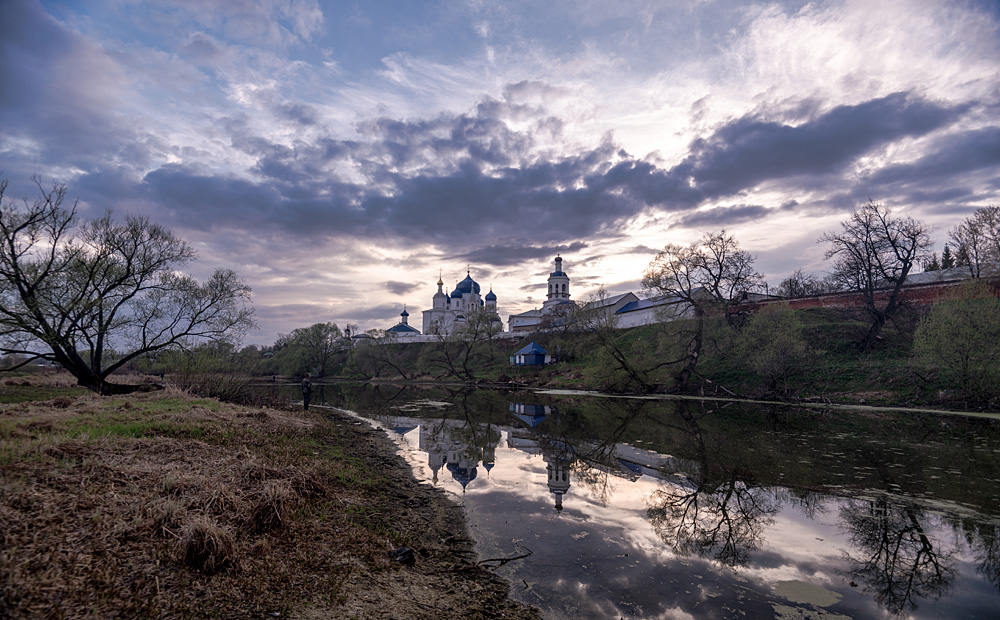 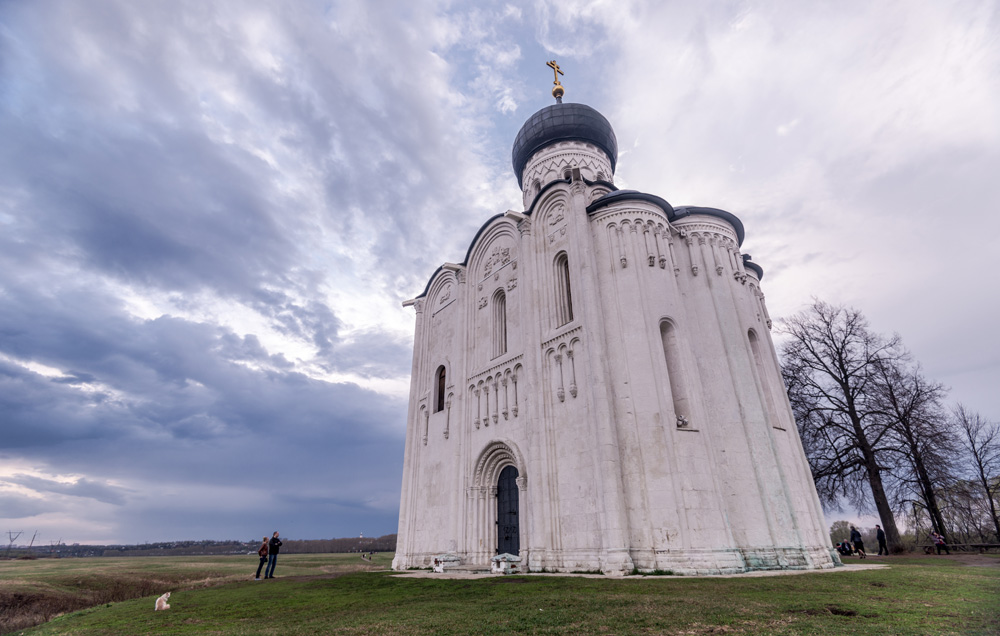 Elena LarionovaChurch of the Intercession on the Nerl
1/3
Just 15 minutes by car from Vladimir, the mouth of the Nerl River hosts the ancient village of Bogolyubovo, and its 4,500 residents. This place is worth a visit to see the white-stone Church of the Intercession on the Nerl, a 12th-century landmark protected by UNESCO. The road to the church from Bogolyubovo is paved with stone, and the church also runs its own apiary, where you can taste fresh honey and buy some as a souvenir.

Bogolyubovo's second major landmark is the Holy Bogolyubsky Convent with its dark-blue domes and snow-white walls. Make sure to taste the convent bread and kvas (a lightly-fermented drink made from bread), which can be purchased at the entrance, and then pay a visit to the Church of the Icon of the Mother of God, decorated with airy frescoes painted in pastel shades. A tip for travelers: To take the best photos, come shortly before sunset for optimal lighting conditions. 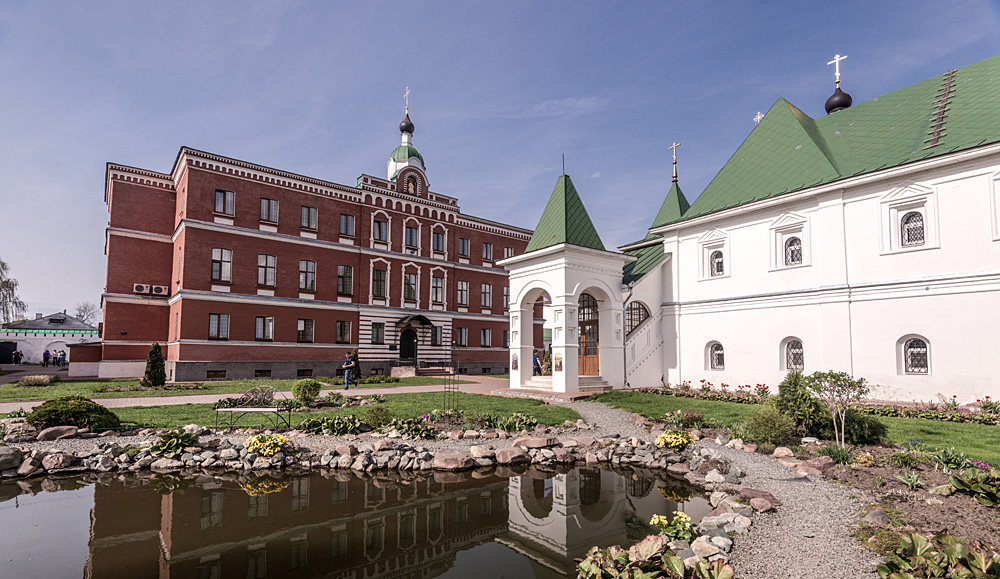 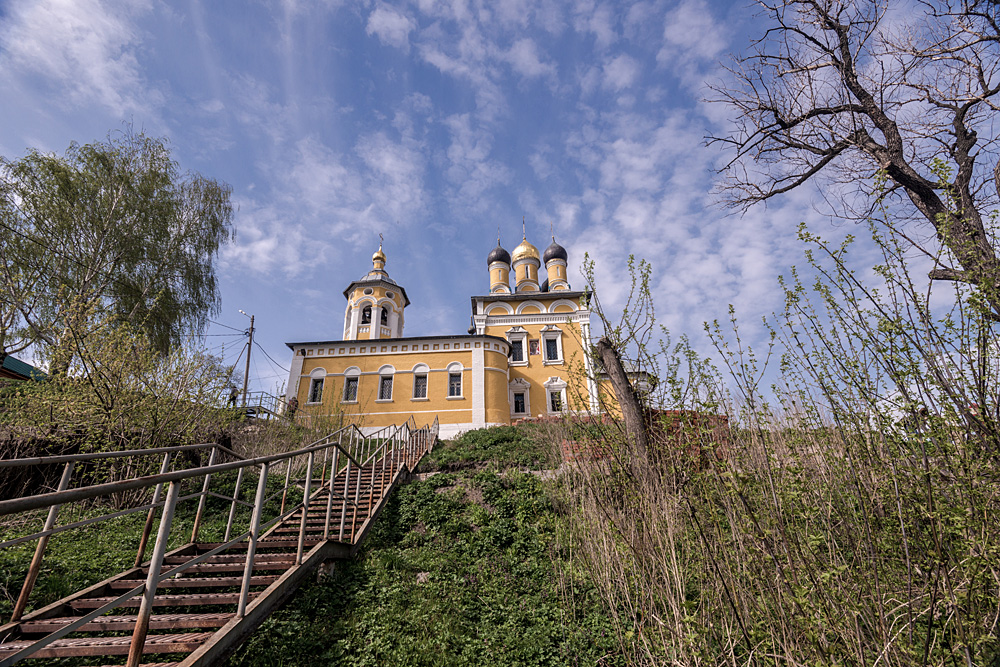 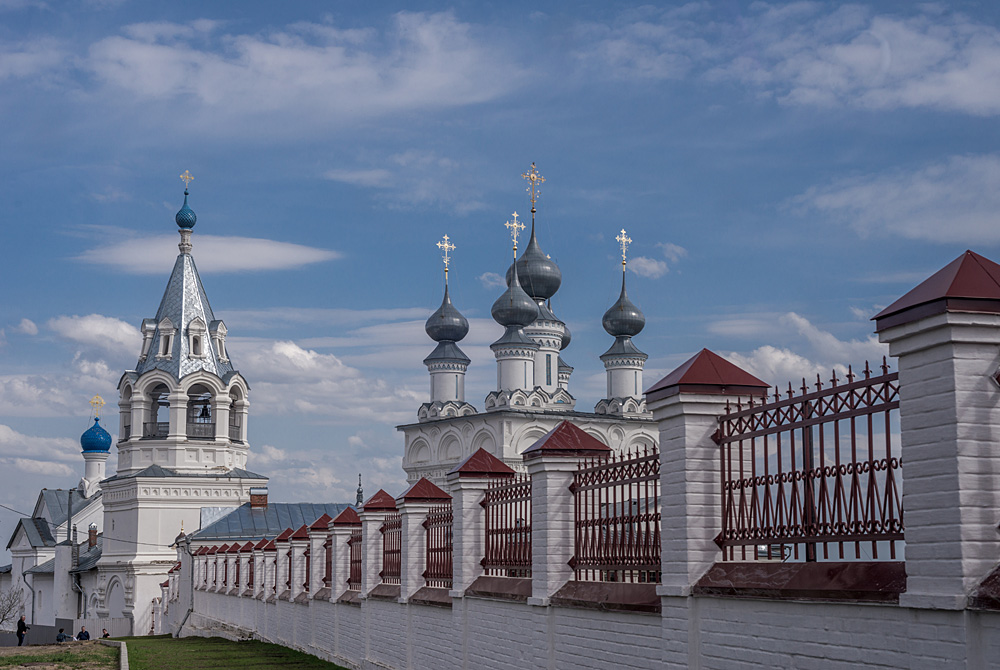 Elena LarionovaThe town of Murom
1/3
Established in 862 A.D., the town of Murom offers a constellation of functioning and well-kept monasteries and churches dating back to the 11th-13th centuries. Top places for visiting include the renovated Holy Trinity Convent, the St. Nicholas Church on the Embankment and the Monastery of the Configuration of the Savior. In the monastery they bake huge kalach breads and make a kvas drink, and you can try your hand at ringing bells in a gatehouse church. 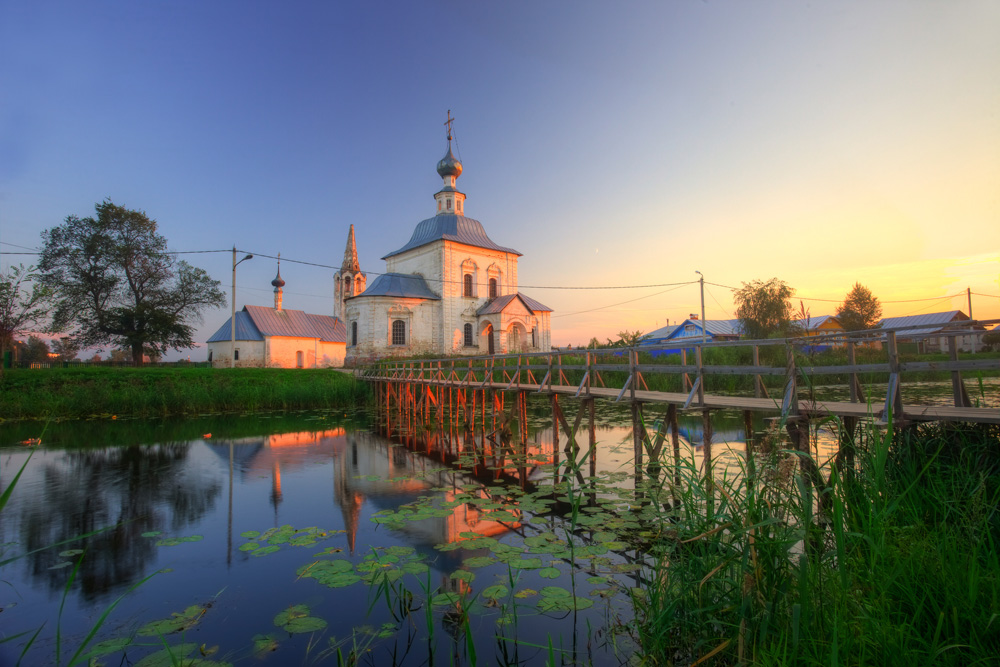 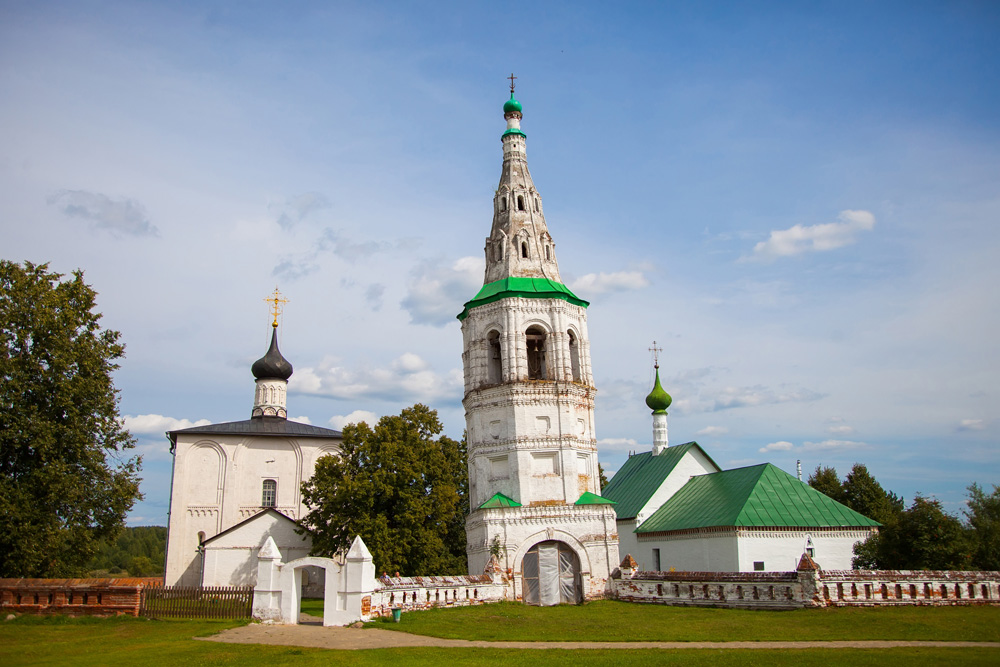 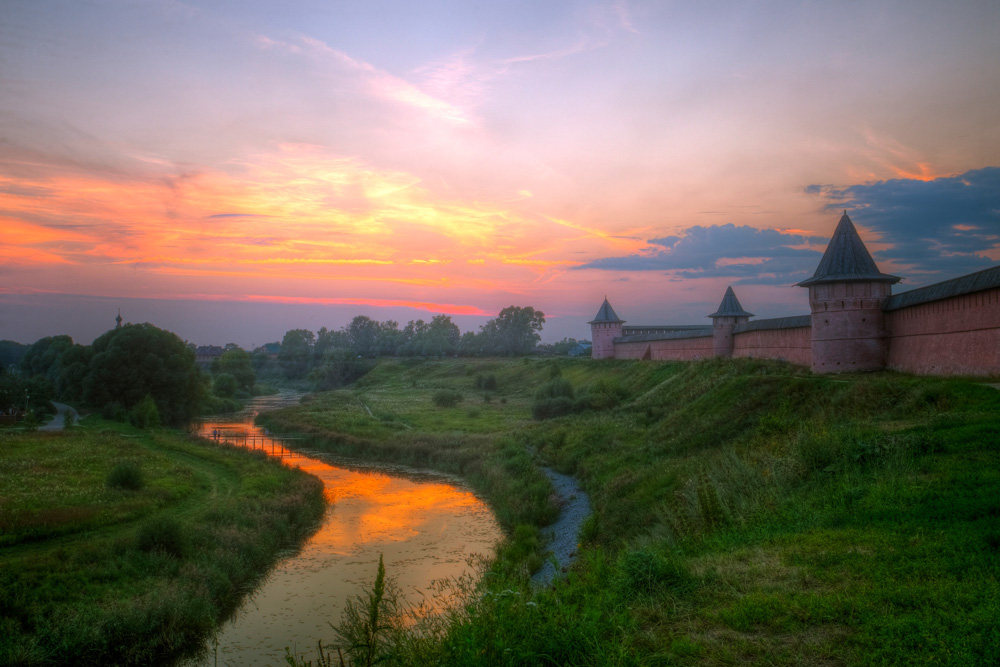 Lori/Legion-MediaThe walls of the Suzdal Kremlin
1/3
Just 16 miles from Vladimir, the town of Suzdal is something akin to an outdoor museum. Eleven monasteries have been built here since the 16th century and the merchants' row on the way to the Suzdal Kremlin (fortress) has belonged to local traders since the 18th century. While you’re here, you should grab a couple of wooden Christmas decorations made by local craftsmen, and if you visit the Monastery of St. Euthymius, you'll have the opportunity to listen to a choir of monks and chiming bells.

On your way back to Vladimir from Suzdal, make a detour to the village of Kideksha, which features a 300-year-old analogue of the Leaning Tower of Pisa – the 18th-century belfry near the Church of Boris and Gleb. Unlike the Italian tower, it is not fit for climbing and is on the verge of falling. Entry is forbidden due to safety concerns. 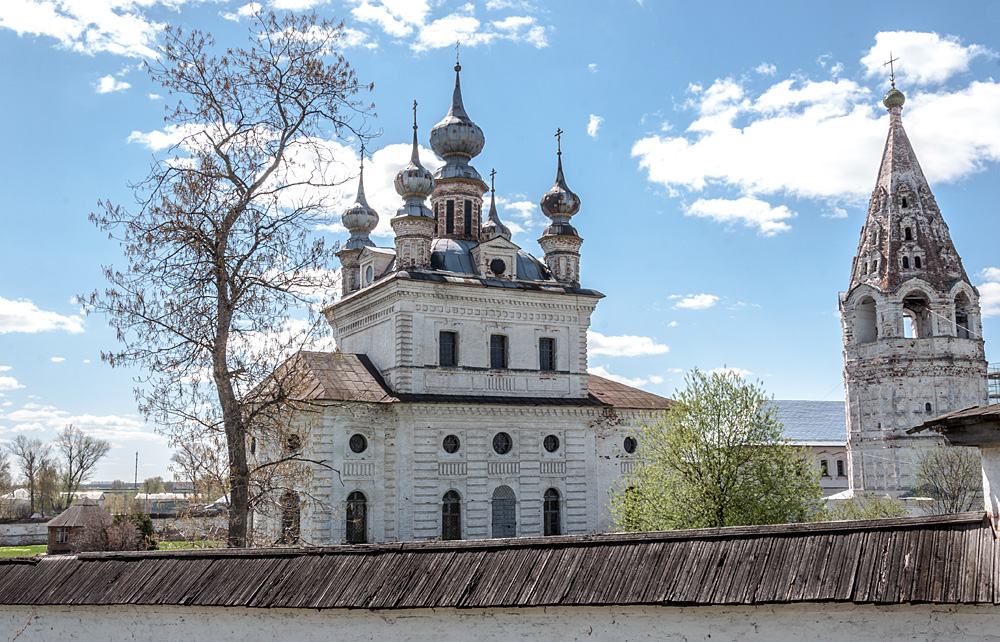 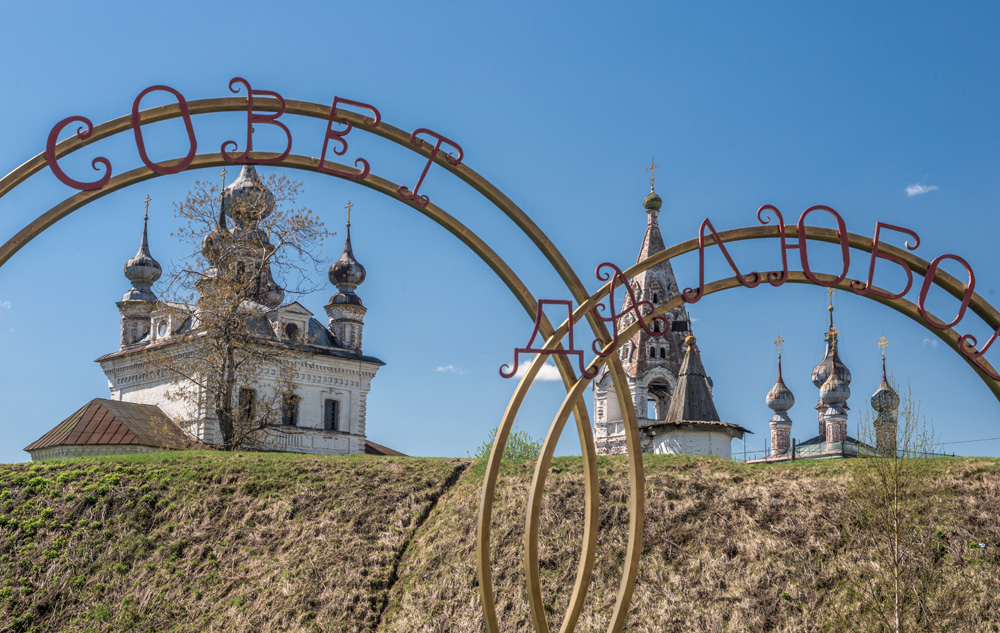 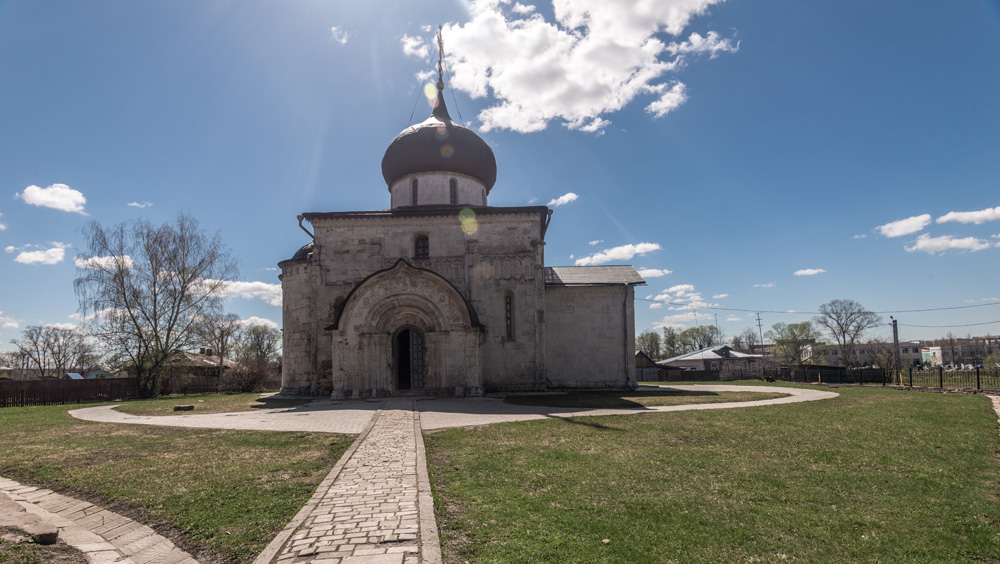 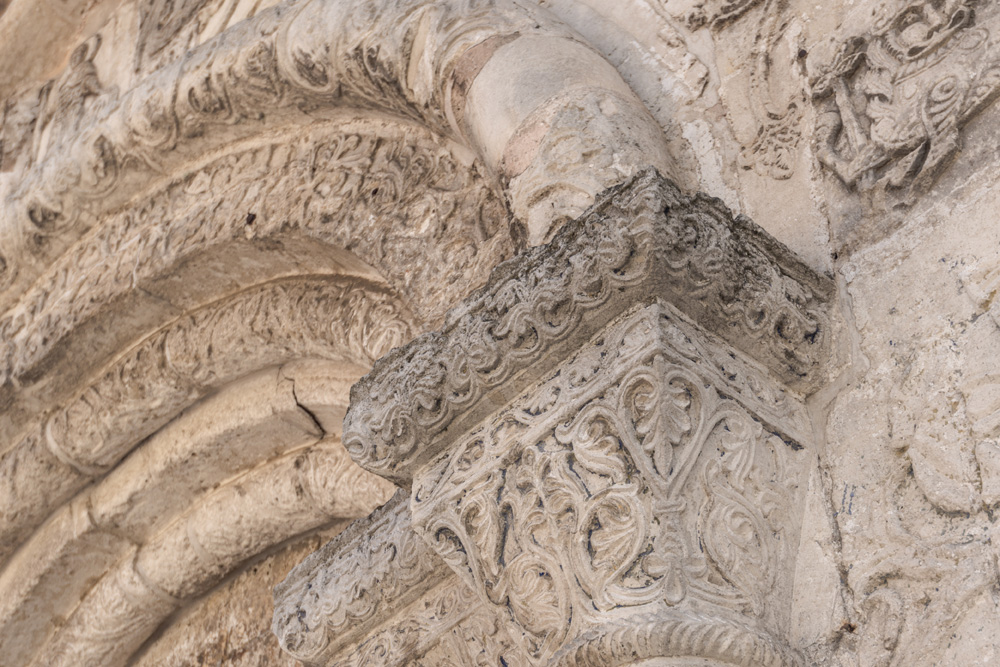 Elena LarionovaSaint George Cathedral in Yuryev-Polsky
1/4
This historic town of 19,000 was established in 1152 by Prince Yuri Dolgoruky, the founder of Moscow (in 1147) and a number of Golden Ring towns. Take a stroll around the center starting from the monument to Dolgoruky in front of the Monastery of Archangel Michael, which hosts an outdoor exhibition of traditional wooden architraves.

Although there is nothing left of the Yuryev-Polsky Kremlin except its rampart, if you walk along it you will come to the town's main landmark – the St. George Cathedral. This fine example of 13th-century church architecture is entirely covered with stone carvings based on religious themes. If you look hard enough you can even find Persian mythical creatures, including clawed birds and four-legged beasts with wings. Searching for an elephant in the ornaments on the wall of St. George Cathedral is a traditional pastime for travelers who buy magnets with this animal in Yuryev-Polsky as a souvenir. 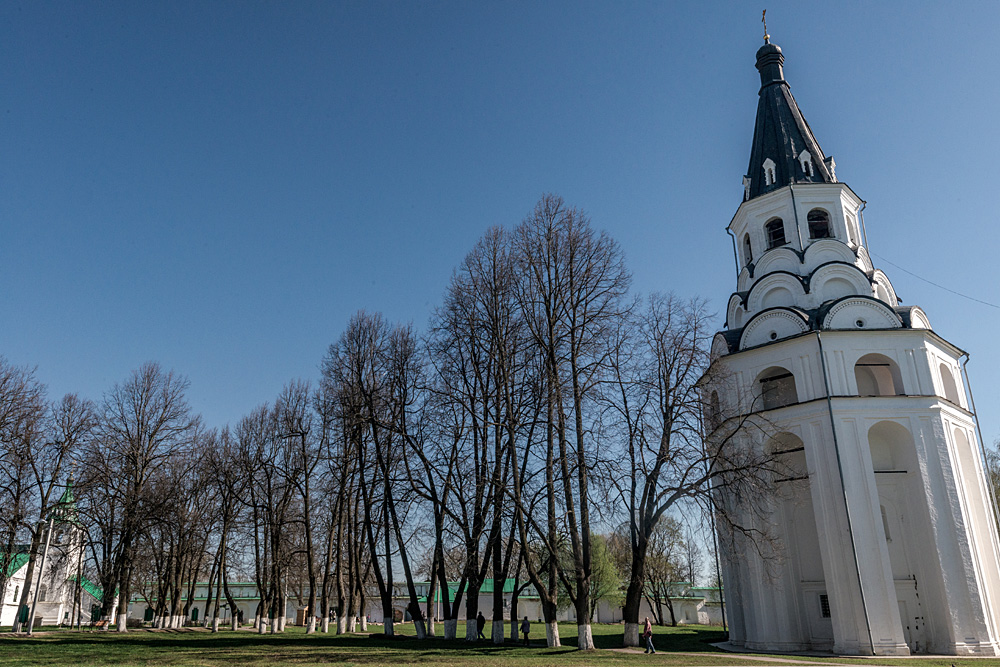 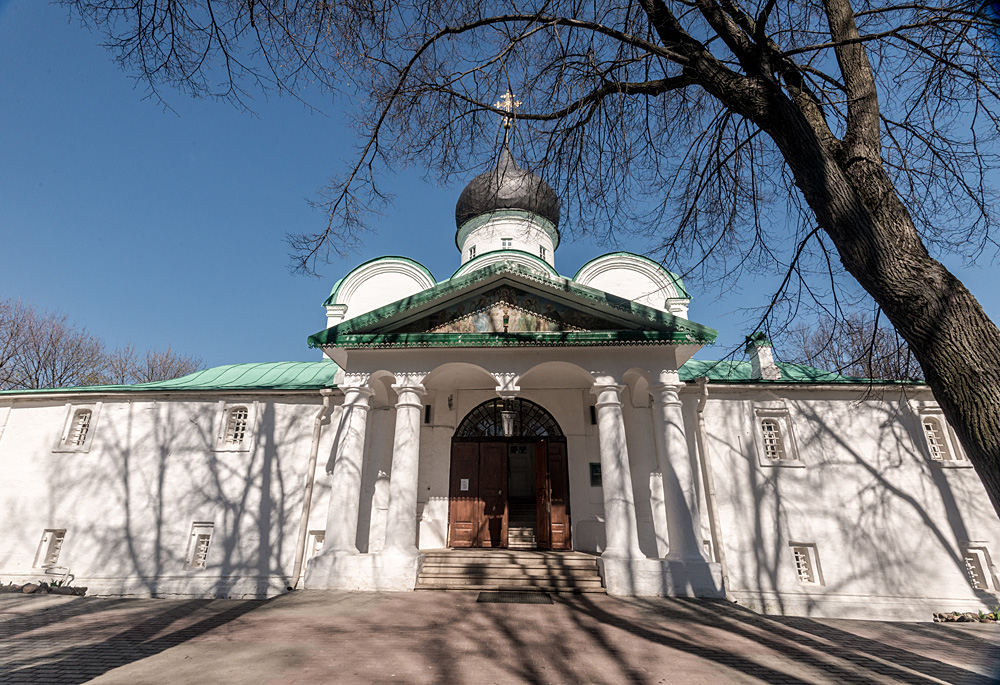 Elena LarionovaAleksandrov
1/2
The history of Aleksandrov is inseparable from the dramatic events of the 16th century, as the Aleksandrov Kremlin was the de-facto capital of the “oprichnina” of the Russian tsar from 1564–1581. Oprichnina is the name of Tsar Ivan the Terrible's special policy aimed at the elimination of "traitors," which included property confiscations, executions and state-controlled terror.

Today the Aleksandrov Kremlin is a well-maintained tourist complex with functional churches and cathedrals. All the buildings of the ensemble are open for visitors with guided tours, and you can also ascend to the viewing point of the Raspyatskaya Church and belfry.