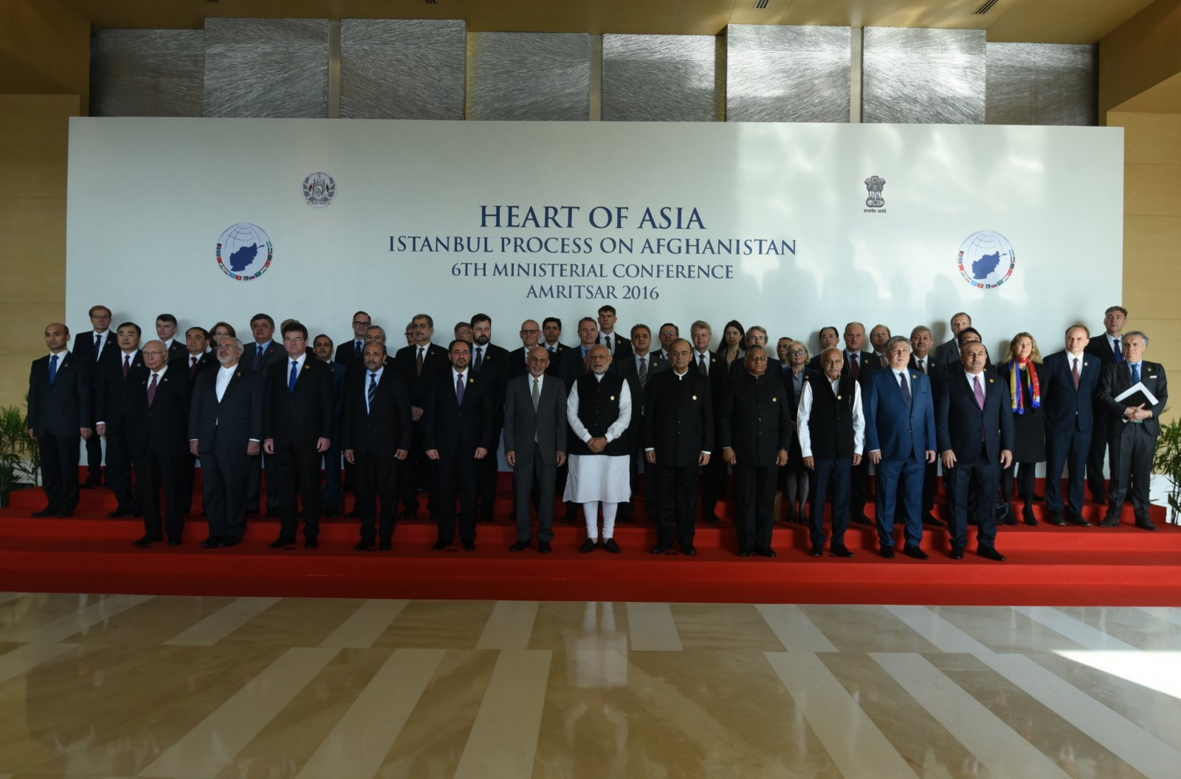 India hosted the 6th Heart of Asia (Istanbul Process) conference in Amritsar on December 3 and 4.

twitter.com/narendramodi
The Heart of Asia (Istanbul Process) conference on Afghanistan, held in Amritsar, close to the India Pakistan border, saw a renewed focus on terrorism and connectivity.

There were “three big issues” which emerged from the sixth Ministerial Meeting of the ‘Heart of Asia’ (Istanbul Process) conference on Afghanistan, held in the northwestern Indian city of Amritsar over the weekend.

The three issues were countering terrorism to create stability and security in Afghanistan; providing Afghanistan connectivity to strengthen economic activities and development, which is essential for the progress of Afghanistan.

Speaking to the media after the conference concluded on Sunday, December 4, Arun Jaitley, India’s Finance Minister (who co-chaired the Ministerial meeting in the absence of India’s hospitalised foreign minister Sushma Swaraj) said the Amritsar Declaration, released at the end of the Heart of Asia meet, “recognizes terrorism as the biggest threat to peace and stability and demands immediate end to all forms of terrorism and all support, financing, safe havens and sanctuaries to it.”

For the first time, a Heart of Asia Declaration has expressed concern at the violence caused in Afghanistan and the region by terrorist groups like Al Qaeda, Daesh (ISIS), LeT (Lashkar-e-Toiba) and JeM (Jaish-e-Mohammed) and so on.

Seeking concerted international cooperation to end the terrorist onslaught, the Declaration also sought early finalization of the draft Comprehensive Convention on International Terrorism and an early meeting of experts to discuss a draft Regional Counter-Terrorism Framework Strategy, recently prepared by Afghanistan, for its early finalization.

Terrorism assumed centre-stage and it was mostly directed against one country, Pakistan.

Afghan President Mohammed Ashraf Ghani, who inaugurated the conference, launched a frontal attack on terrorism emanating from Pakistan and even appeared to turn down a Pakistani offer of $500 million for the Afghanistan Reconstruction Fund.

“This fund, Mr Aziz, could very well be used for containing extremism because without peace any amount of assistance will not meet the needs of our people,” said President Ghani, directly naming Sartaj Aziz, Advisor on Foreign Affairs to Pakistan’s Prime Minister Nawaz Sharif.

This kind of direct “attack” on a participant at an international conference is not usual.  Indian and Afghan leaders had met earlier to formulate a joint plan to raise the issue of countering terrorism, but Indian officials told RIR that the Afghan President’s “attack” on the Pakistani representative had “surprised” them.

“I’m sure that President Ghani has strong reasons to do so (name Mr Aziz) but I don’t think that the Heart of Asia is the right place for settling scores between member states,” said Zamir Kabulov, the Russian President’s Special Envoy on Afghanistan. “We believe that Heart of Asia is a dialogue platform which can complement but can’t supplement the existing well-known regional relations,” he said, and urged India and Pakistan not to use the forum for “scoring points.” Kabulov was speaking to some reporters after the conference concluded.

“We are in favour of putting aside bilateral blames because after these blames life will continue and your country will remain neighbours for centuries,” Kabulov said, responding to a question. “We wish they (Afghanistan, Pakistan and India) are good neighbours,” he said. “It is in the interest of the Russian Federation.”

Asked about terrorism, Kabulov said at the conference there was “a consensus that terrorist sanctuaries should be done away with.” He agreed that there were “no good or bad terrorists. I believe the good terrorists should be in jail,” the Russian official said, adding that “we understand India’s concerns, but we can’t win the war of Terror without Pakistani support.”

With regional connectivity as the other main theme of the conference, Kabulov said, “what the Indian Prime Minister and the Afghan President said on regional connectivity to Eurasia is along the lines of the Russian thinking. Afghanistan can become the bridge between Central Asia and South Asia,” he said.

Kabulov represented Russia in the Heart of Asia conference where he articulated Moscow's position on Afghanistan's transition. He said all major players, including India, must extend all possible support to Afghanistan in its transition.

Earlier in his address, President Ghani, while providing a review of the situation in Afghanistan, said, “We are now embarking on an earnest effort to ensure the security of our country and the well-being of our people. Momentum towards this objective requires a framework, and an action plan for addressing the distinctly Asian – or more accurately the Euro-Asia—dimensions of our potential, as Russia is a significant stakeholder and interlocutor, so that our potentials and our problems can be faced.”

India hosted the 6th Heart of Asia (Istanbul Process) conference in Amritsar on December 3 and 4. The HoA, which was launched in Turkey in 2011, seeks to bring regional countries together to support peace and stability in Afghanistan.

The meeting in Amritsar was attended by foreign ministers (including Javad Zarif of Iran) and other high-level representatives (Kabulov)from the 14 other ‘Heart of Asia’ member countries, which include, besides Afghanistan, Azerbaijan, China (Assistant Foreign Minister), India, Iran, Kazakhstan Kyrgyzstan, Pakistan, Russia, Saudi Arabia, Tajikistan, Turkey, Turkmenistan, the UAE and Uzbekistan. The US, Britain, Canada, Australia, Japan, and the EU and international organizations serve as “supporting nations” to the process.

Amritsar was specially chosen as the venue for the conference because of its symbolic value. “Amritsar was chosen because it is located on the Grand Trunk Road, for centuries a traditional trade route linking India to Afghanistan and beyond,” an official told RIR.  The city is less than 50 km to Lahore in Pakistan, 450 km to the Khyber Pass on the Pakistan-Afghanistan border and 620 km to Kabul, the capital of Afghanistan.

President Ghani also pointed out the “historic” significance of the “beautiful city of Amritsar, a city that used to be the centre of bills of exchange and commerce connecting India to Central Asia, Russia, the Middle East and beyond.”