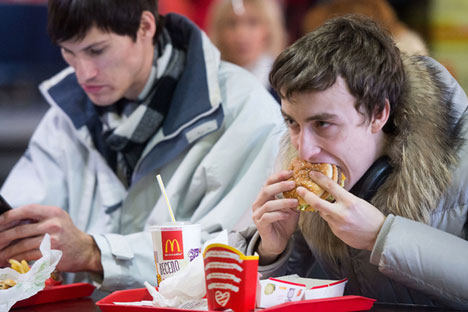 Russians eat in a McDonald's restaurant.

AFP/East News
Despite economic sanctions and the crisis, U.S. companies are continuing to increase their presence in Russia. The cornerstone of American success is the inexpensive fast-food market, which has only grown more popular during the crisis.

Companies from the United States are continuing their active expansion into the Russian market.

At the end of the period between the second half of 2014 and the first half of 2015, the share of U.S. brands accounted for 64 percent of the new outlets opened in Russia, according to a study carried out by the company Magazin Magazinov. The share of the United States' nearest rivals (Sweden and Spain) accounted for only 8 percent.

According to experts, 2015 saw a negative trend in Russia’s retail sector for the first time – more international stores closed than opened (1,024 outlets closed and 991 opened).

However, this trend did not affect the Americans. Over the year, American brands closed down 165 outlets, but opened 364. Such brands as Carl's Junior, American Eagle Outfitters, Diane von Furstenberg and Wendy's left the market (although Carl's Junior, incidentally, announced its return to Yekaterinburg soon afterward).

However, they were replaced by a whole galaxy of new players. Dockers, Forever 21, Charley's Philly Steaks, Great American Cookies, Magnolia Bakery, Pretzelmaker, Schlotsky's, Twin Peaks, Crate & Barrel and others opened their doors in Russia for the first time.

As specified by Olga Yasko, director of the research department at Knight Frank (Russia and CIS), a total of 14 new American brands entered the Russian market during this period.

As noted in the study, the activity of foreign chains declined due to a sharp drop in retail turnover (minus 7.9 percent, the biggest drop since 1991) and the weakening of the national currency against the dollar.

Another obvious reason is the decline in real incomes of the population, which amounted to 3 percent. The chains hit hardest were those operating in the mid-price segment, which according to the study accounted for almost 90 percent of the outlets that have closed.

Political factors – worsening relations with the West, sanctions, the crisis in Ukraine – these all played their role as well. However, this did not hinder U.S. retailers from continuing to develop their presence on the Russian market.

The list of products that U.S. companies offer to the Russians is quite wide and includes luxury brands. For example, the world-famous jeweler Tiffany opened its first wholly owned retail store in Russia in 2014, though in August this year it announced that it had postponed the opening of a second outlet.

However, the most active is public catering, which, according to Russian analysts, was quite predictable – sales of cheap fast food always go up in times of crisis.

The top five brands that have shown the most activity consists solely of American fast-food chains (KFC, Burger King, McDonald's, Starbucks, and Baskin Robbins opened the most new outlets in Russia this year).

Burger King and KFC have also been active in continuing their expansion, opening outlets in seven and five new cities, respectively. This is despite the fact that in general, the number of outlets in the cities with a population of one million people has decreased by 15 percent compared to 2014.

"New players will continue to come and test the Russian market for interest in their products," said Gavrilov. "Entrance into the market is quite cheap now, as commercial conditions for tenants have improved significantly compared to the pre-crisis situation."

At the same time, according to Yulia Sitnikova, senior research consultant at Magazin Magazinov, U.S. retailers will maintain their presence in the market despite the political problems.

"It is unlikely that American brands will leave the market completely," she says. 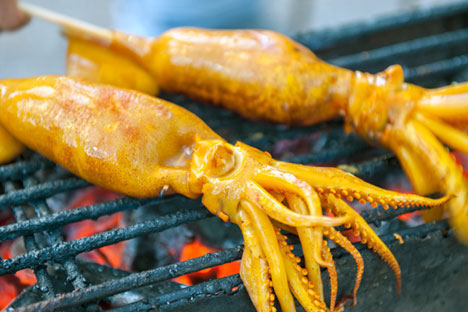 "The Russian market is a big sales market, pretty well developed by them (for instance by restaurant chains). Perhaps, sanctions and complications in the international situation may affect the mood of retailers and somehow restrain their expansion. But they will not by any means exit from the market."

Given current trends, street food and cheap clothes will retain the best positions.

"Most likely, fast-food chains will continue to grow," Gavrilov says.

"As for fashion-retail, development plans will be mostly in the low-price segment brands. The rest are likely to maintain quite a conservative policy of waiting for the stabilization of the population's incomes and retail turnover."

Read more: How Moscow chefs are coping with food embargo