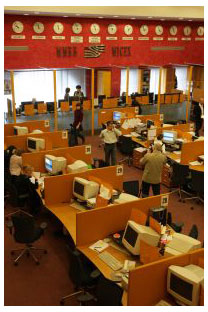 Three big loans from the government in a row have apparently been unable to prevent Russia's stock markets from plunging, Russia's banks from stopping credit operations, and Russian oil companies from asking for a bailout. Some experts are even apprehensive of these measures, as most of these funds went to state-owned enterprises that are unlikely to throw the money back into the economy.

Trading at Russia's stock markets stopped again on Wednesday as the Russian Trading System (RTS) index lost 9.43 percent, and the Moscow Inter-Currency Exchange (MICEX) plummeted 13.86 percent. The Federal Service for Finance and Markets (FSFR) said that the trading will be suspended for two days until October 10. The bad news came hot on the heels of yesterday's announcement by President Dmitry Medvedev that the state was planning on giving Russian banks loans totaling 950 billion rubles ($36.4 billion).

"The period of abundance that we are living through is drawing to a close," Medvedev said while announcing the new loan. "The year 2008 will most likely be the `fattest' year in terms of the amounts of oil and gas extracted in Russia. In this sense we are crossing an important threshold."

This may indeed be the case, as just a week before, on September 29, Russia's Central Bank granted $50 billion from the country's hard currency reserves to support the financial system to the state-controlled Vnesheconombank.

This means that in just ten days, Russia credited its ailing banks and big businesses some $86.4 billion, but to no avail, as the stock markets continue plummeting. The Vedomosti daily summed up the situation in one ominous phrase: "The stock market just does not react to anti-crisis measures." What is worse, big businesses are asking for more support to repay their foreign debts. And even Russia's notorious petrodollars do not provide a solution, as even energy companies are crying for financial help.

On Tuesday, Vagit Alekperov, the president of LUKoil, said that his company, Gazprom, Rosneft and TNK-BP approached Prime Minister Vladimir Putin with a request to provide them with a loan of two to five billion dollars. The loan is to be supplied on "market conditions" and is needed for "maintaining the investment activities" of the companies, as well as for repaying foreign debts. "The government can hardly find a better borrower," Alekperov was quoted by the Vedomosti daily as saying. "All our property is here and we shall return the loan to the state with a big interest."

Yesterday's loan to the banks is supposed to be returned in five years at the earliest. Experts praise this governmental decision, since it will preserve the conditions for the development of production, or the "real economy," which cannot do without loans. However, some analysts find the distribution of loans a little disturbing, since most of the loans went to the state-owned banking giants which may just keep the money on their accounts without making a life-saving "injection" to the economy.

"A lion's share of the money went to state banks, which already have no problems with cash," said Stanislav Yaroshevichus, an expert with ING Bank. "The medium-sized banks did not get anything... This means that the process of tacit nationalization of financial institutions continues, and until this process stops there can be no stability."

Out of the 950 billion rubles whose disbursal was announced yesterday, 500 billion are to go to Sberbank, 200 billion are earmarked for Vneshtorgbank, and 25 billion-to Rossselkhozbank (Russia'a bank of agriculture). Experts note that these loans are of a much higher "quality" than previous ones.

"Before, the authorities helped banks to solve short-term liquidity problems," Maksim Raskosnov, an analyst with the Renaissance Capital investment company, said in an interview to the Vremya Novostei daily. "Now the authorities are providing banks with-long term loans, which will help solve the problems with the banks' crediting of industry and the population in general."

While supporting the measure in general, Garegin Tosunyan, the president of the Association of Russian Banks, cautions against the trend of providing loans to the largest banks, leaving the small ones to their own devices. "This loan will be effective only if money quickly reaches the institutions that need them most," Tosunyan said. "If the chains of transferring the money are too long, the problem will just be aggravated."