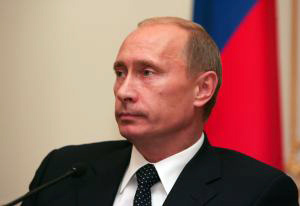 Speaking at an annual meeting of the Foreign Investment Advisory Council, Putin reiterated that the government was well prepared to deal with the effects of the global liquidity crunch and promised to take further steps to strengthen banks and companies.

"On the whole, our economy is well enough prepared for long-lasting external shocks," Putin said.

"The Russian government is seeking answers to these global challenges and finding them," he said.

Putin said he had ordered an additional 200 billion rubles ($7.6 billion) to be provided to the Deposit Insurance Agency to secure the stable operation of banks. The government has drafted a bill to enable the agency to acquire troubled banks, First Deputy Prime Minister Igor Shuvalov said after the meeting. The bill was submitted to the State Duma on Monday, he said.

The government has pledged to allocate some $200 billion in loans and tax cuts, among other measures, to help banks and companies deal with the country's worst financial turmoil since 1998.

As global economies continue to take a beating, Russia is well positioned to fund economic growth by using its internal resources, Putin said. He said the country has not registered any net capital outflow between January and September of this year.

Putin said foreign investors including Renault, Unilever and Nestle had reiterated multimillion-dollar commitments to Russia during the 2 1/2-hour meeting. Shuvalov said no one at the meeting said they would like to curtail their operations in the country.

"It has been acknowledged that the investment climate is improving in Russia," Shuvalov said.

James Turley, chairman and CEO at Ernst & Young who co-chairs the council, acknowledged, however, that investors had raised some concerns. When asked by a reporter whether they had mentioned the TNK-BP and Mechel disputes with Putin, Turley said they had discussed all issues, without elaborating. "I am not saying it's all rosy," he said.

Shuvalov told reporters after the meeting that Putin had assured Shell chief Jeroen van der Veer that investing into the country's oil and gas sector did not pose any risks for foreigners.

Turley stressed, however, that foreign investors "feel good" about the steps the government has taken to stem the crisis and about their investment into the local economy.

"We pledged to the prime minister our ongoing support," Turley told reporters.

Luis Cantarell, executive vice president at Nestle, announced the expansion of the company's instant coffee factory in the Krasnodar region, saying the Swiss-based company would invest 240 million Swiss francs into the operation. He said the crisis had not affected the company's plans in the country. "If we were scared to invest in Russia, we wouldn't make this decision," he said.

Putin said the government would like to intensify its cooperation with the FIAC, adding it would take into account proposals and suggestions made by the council's members.

Speaking at the start of the meeting, Putin repeated his criticism of the West, saying U.S. and British authorities, rating agencies, the International Monetary Fund, and the Basel Committee on Banking Supervision, which includes the United States, Canada, France and Germany, were all unprepared to deal with the worst financial debacle since the U.S. Great Depression.

He did offer measured praise for Western governments, commending their monetary institutions for taking measures to stem the liquidity crunch. "We believe this is a positive, good signal," he said. He said, however, that it was too early to make any final conclusions.

Putin said the crisis has shown that China, India, Russia and Brazil, known as the BRIC countries, will become the locomotive of the world economy. Citing IMF statistics, he said next year the Chinese economy will grow by 9.3 percent, India by 6.9 percent, Russia by 5.5 percent and Brazil by 3.5 percent. By contrast, the United States and the European Union are expected to post zero growth in 2009, he said.

Emerging markets are now the central drivers of the global economy, contributing 78 percent to global growth and 63 percent to global inflation, according to Merrill Lynch. The figures are expected to rise to 88 percent and 71 percent, respectively, next year.

The global crisis will usher new opportunities and challenges like a shift to alternative energy, which Russia expects within the next 20 years, Putin said. "This challenge is doubly important for Russia," he said.