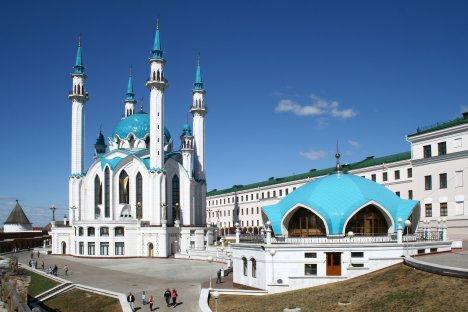 The Muslim-majority region has proved to be an interesting investment destination for funds with Muslim shareholders or that are based in Muslim countries.

Although there has been much speculation about Muslim investors moving into Russia, the situation has been one of all talk and no action — until now.

Two Islamic funds have recently launched operations in the  Muslim-majority Republic of  Tatarstan. The first is the  Malaysian private equity firm Amanah Raya Capital Group, which has launched several  projects the republic. In the 1990s, most foreign investors headed straight for Moscow. The game changed after 2000, however, and Russia’s regions have become the new frontier; Kazan caters to the 80 million Russians that live in the cities lining the Volga River.

“We bypassed Moscow and came to Kazan, as it offers the most attractive investment climate,” said Dato Ahmad Rodzi Pawanteh, AmanahRaya’s managing director.

The fund’s first project was the Kazan Halal hub, which imports halal meat and other products for the region’s Muslim majority. Once established, the fund financed the construction of a halal meat processing plant in Baltash, 62 miles from Kazan, where local producers can also bring their meat to be processed according to Islamic rules. The latest phase of the project set up an Islamic fund management company that will invest in halal-related projects. The management company will also hold a pilgrimage fund to finance a Hajj for local residents.

“We have been very successful with this sort of fund in Malysia, and it was an obvious product to bring to Tatarstan,” said Pawanteh. “But we are also working with the local government to raise funds on a private equity basis to bring in foreign investment to the region.”

According to Pawanteh, the local government has been very active in promoting foreign investment in the region, and has taken a stake in these funds as a way of reassuring foreign investors that it is willing to share the risks with investors.

The second fund that recently established itself in Tatarstan is the Foras International Investment Company, which represents Saudi money and has launched a classic investment vehicle together with the newly established Tatarstan International Investment Company, or TIIC. The $50 million fund will focus on the region’s strengths in bio-technology, nanotechnology and I.T. The company was inaugurated in June ; the founding investors have already contributed $10 million and are in the process of raising the balance.

“We are focused on the Volga region and the attractive investment climate the government has created here with tax breaks and incubators,” said one of the Foras representatives. “One of the most attractive elements in this region is the high level of science and engineering, especially in things like civil aviation.”

Kazan was known in the Soviet era as a center of learning, and its universities still churn out many of Russia’s best engineers. It is also home to a flourishing aviation industry as well as a burgeoning automotive sector.

“We have 20 projects in the pipeline, and 80 percent of them are brownfield that we will develop over the next three years,” said Nor. “But probably the most prospective are in the technical aviation sector.” Nor said he can’t reveal the details of the projects yet as they are still in negotiations, but that he is particularly excited by a project to make aviation rescue vehicles.

“The companies here are advanced, and the level of technology is as good as anything I have seen in Europe,” said Nor. “And the trouble with Europe is it is a highly saturated market. In Russia, we can easily find companies where we can really increase the value, with willing buyers in the Middle East and beyond.”