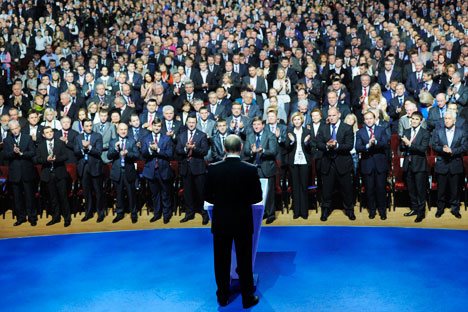 Another campaign article written by Russia`s Prime Minister and presidential candidate Vladimir Putin was released in Komsomolskaya Pravda daily on Monday. This time the article focuses on social policies.

The article begins with Mr. Putin saying that the budget’s expenses on social sphere now stand at over 50%. “This is true, but is not enough”, says director of the Center for Political Information Alexei Mukhin.

"It is very tempting but still hard to agree that Russia has already turned into a socially-oriented economy. Yes, pensions and salaries are increased regularly, and some special programs were launched to improve the living of the most vulnerable social groups. Nevertheless, the gap between the rich and the poor in Russia remains too wide and can be compared to that in the United States. So, talking about social equality in Russia now would be a mistake."

Putin, however, is aware of this and is going to move on to turn Russia into a socially fair country. He pledges a further increase in pensions, adding that he is opposed to raising the pension age. The article says that the practice of paying $13,000 to women who give birth to more than two children will continue as it has already brought some positive changes to the country’s demographic situation. Mr. Putin also suggests paying about $230 a month to a mother of three and more children until a child is three years old. He believes that without managing to reverse a demographic decline and boosting the country’s population from the current 143 million, Russia is ‘facing the risk of turning into an empty space’.

Putin also pledges that investing in education will become a priority in the decade to come. He admits that latest reforms in healthcare and education have not proved effective, adding that low salaries result in the lack of motivation among professionals working in state-funded organizations.

Putin says that starting from September 1, 2012, the income of school and university teachers will reach the average level in a region, while by 2018 their salaries will stand at 200 percent of the national average. Salaries in state-funded hospitals will go up, too.

Putin also stressed the need to boost self-esteem of blue-collar workers, and suggested the revival of the so-called ‘working aristocracy’. He expects that by 2020 this social class could comprise about 10 million qualified professionals. Political analyst Dmitry Danilin comments.

"In the early 20th century the working aristocracy was one of the pillars of our state. It guarantees stability and effective economic development."

This is Putin`s fifth campaign article. The first one was published in Izvestiya on January 16th, and dealt with major challenges Russia is facing now. A new article was released in Nezavisimaya Gazeta a week later to focus on ‘the national question’. The third and fourth articles in Kommersant focused on Russia’s economic development and democracy. All his campaign articles unveil the highlights of his election program.