Inefficiency and inequality hold Russia back 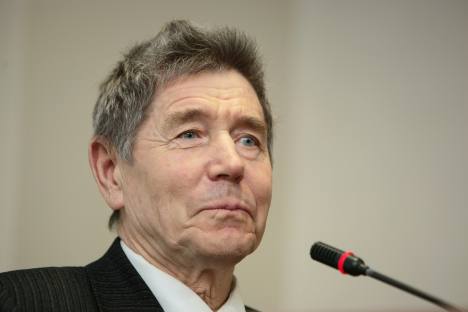 Valery Makarov, president of the New Economic School, is one of Russia’s most respected economists. Voice of Russia recently spoke with Makarov about the state of Russia’s economy and its prospects.

Voice of Russia: In your opinion, what are the main problems of Russia’s economy today?

Valery Makarov:The most important problem in my opinion is the huge inequality between different classes of Russian society that has been constantly growing for the last 20 years, since the collapse of the Soviet Union. The rich get richer and the poor get poorer. This is of course very dangerous, because when the inequality reaches a certain limit, it leads to dissatisfaction among people and as a result to revolts or even revolutions. Growing inequality means the lack of justice and Russian people attach great importance to justice. That is why we have a very tense situation in the Russian society at the moment.

Another very important problem for the Russian economy is its low efficiency, expressed particularly in low labor productivity. This means that an average worker in Russia produces a lot fewer goods than the average worker in Germany or in the U.S. It happens not because we are lazier than people in Western Europe and America, but since we have inefficient capital and inefficient equipment and moreover the whole organization of work in our country is very inefficient.

VoR: What do you think of the modernization ideology that is being promoted by Russian President Dmitry Medvedev?

V.M.: This policy seems to be the right one. We really need to modernize our economy just like the most developed countries of the world do, but in practice, modernization is just a beautiful slogan. People in Russia do not understand what modernization really is. Or, to be more precise, everyone understands modernization in his own way. We have already had lots of beautiful slogans in the history of Russia. In the Khrushchev era for example, we had: “We will soon live under communism”, in the Gorbachev era, “Perestroika will solve all our problems.”

“Modernization” is just one of these beautiful slogans that is good to use in different speeches, but what it really is – people do not know.

VoR: From your point of view, how could Russia end its dependence on oil and gas?

V.M.: The main question is: “Why is it just the oil and gas sector that is developing in Russia?” The answer is: “Because there is a demand for that. The whole world wants our oil and gas.” What else do we have to offer the world? We used to have a very strong military sector. Now we build many fewer military products than before, but I believe we still have great potential in this field.

Russia, the Russian mentality and Russian workers have one peculiarity: We can produce small amounts of goods or single products of very high quality, but we are not skillful at producing large quantities of goods. We do not organize mass-production properly. Floating nuclear power plants are single products and in this field we could succeed. We can make science-intensive single products that other countries need. I believe it is a good way of getting rid of oil and gas dependence.

VoR: How can we solve the problem of income inequality in Russia?

V.M.: It will take a lot of effort to get rid of it. First of all, we need a new tax system. At the moment, rich people in our country pay the same taxes as poor people, although they should of course pay a lot more. The land tax and the real estate tax are extremely low in Russia. In the suburbs of Moscow you can find lots of huge luxury mansions that cost hundreds of millions of dollars while the tax rates for them are very low.

But the most important thing is to give people an opportunity to find their way in life. Those who live in little towns and villages in Russia do not have any opportunities at all. Many very talented people really do not know where they could express themselves. We should create these opportunities and for this purpose we need the support of our government.

VoR: According to Transparency International, the level of corruption in Russia is a lot higher than in Western Europe. Do you think it is possible to solve this problem?

V.M.: I believe this is a problem that can be solved. The reason of an extremely high level of corruption in Russia is from my point of view quite obvious. In Germany or the U.S., the strongest segment of society is the cluster of entrepreneurs, those who earn money and build the economy. In Russia, by contrast, the strongest social segment nowadays is the cluster of bureaucrats. At the moment they are the most important people in this country.

If a bureaucrat earns a fixed salary, then the only way for him to get rich is to steal. Russian bureaucrats are highly qualified in this field. Moreover, the laws in our country stimulate corruption. You can solve any problem if you bribe a bureaucrat. Just like in my example with the house. In order to build a house you first need to spend three years getting various permissions from different clerks.

Opinion: How to deal with the corruption?

What we really need is a system of equal rights for all segments of society: for scientists, bureaucrats, military people, etc. If they all get equal rights, then there will be no such problems in our country. But for that we need a big reconstruction of our society.

One more way to fight corruption is to create transparency. Every joint-stock company should show its budget not only to its shareholders, but also to everyone else. Then it will be a lot more difficult to steal. This requires of course a lot of time and money, but in my opinion it is the best way to fight corruption.

VoR: Do you believe economics can help solve the main problems of the Russian economy?

V.M.: Yes, of course! This is exactly the purpose of economics. But modern economics is unfortunately too one-sided. The most influential economists today are all experts on market economies. If you take a look at Nobel Prize winners in Economics since 1967 you will see that they are all specialists in market economies. Where in the modern world do we have market economies? In the United States, Western Europe, Singapore, Japan and in some other states. And the rest of the planet – these 4 or 5 billion people have totally different economic models. Even such a super developed country as the United Arab Emirates is not a market economy. They have an economic model that is different from those described in modern textbooks. Even banks in this country work in a different way.

VoR: What are the main advantages and disadvantages of Russia’s entry into the WTO?

V.M.: Russia’s entry into the WTO is in my opinion a rather controversial issue since I see there some definite advantages and some definite disadvantages for us. In some fields we get advantages, for example, in the automotive industry. In some fields we get only disadvantages, for instance, in agriculture. I find China’s policy regarding its WTO entry very wise. They joined the WTO a long time ago but with lots of different restraints. And Russia is ready even before its entry into the WTO to fulfill all their requirements. I believe this is wrong and somehow even insults our national pride. An entry just for entry’s sake should not be our aim.

VoR: What do you think, is there anything that we should borrow from other countries of the world and adopt here in Russia?

V.M.: I believe the most important thing that we should borrow from other countries of the world is a right distribution of power between different levels of governance. We have several levels of governance in Russia. These are municipalities, federal subjects and so on. In Germany, for example, federated states have a lot more authority than our municipalities. In Russia, everything is managed at the federal level, even courts and the police. It leads to a suppression of initiative from below. That is why young people in the Russian provinces do not have any opportunities in life. They just have nowhere to go.